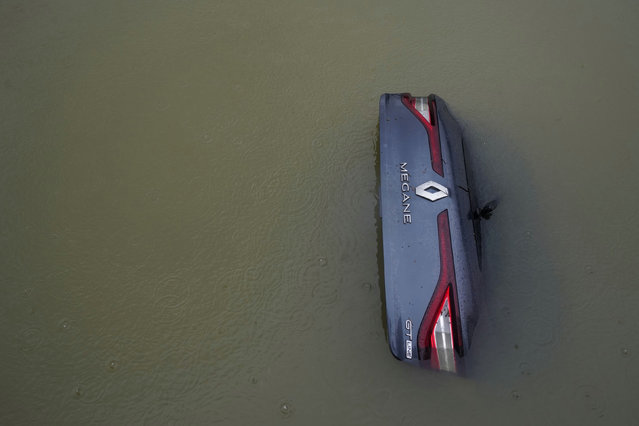 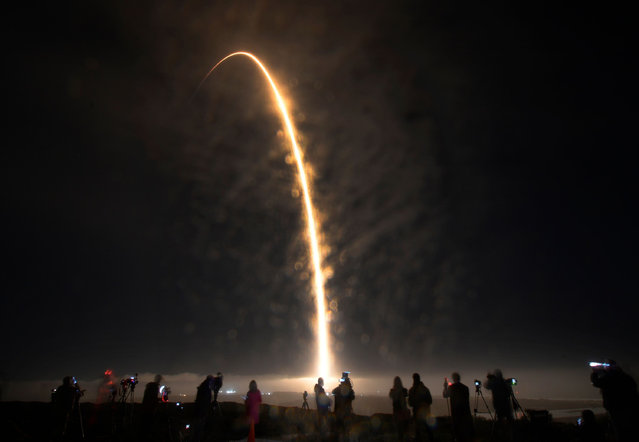 A first-of-its-kind asteroid deflection experiment lifted off overnight from Vandenberg Space Force Base in California on November 23, 2021. SpaceX launched NASA's DART mission on a Falcon 9 rocket 10:21 p.m. PST Tuesday on a 10-month mission to collide with a near-Earth asteroid, proving a technique that could protect Earth from a future threat from space. (Photo by Gene Blevins/ZUMA Press Wire/Rex Features/Shutterstock) 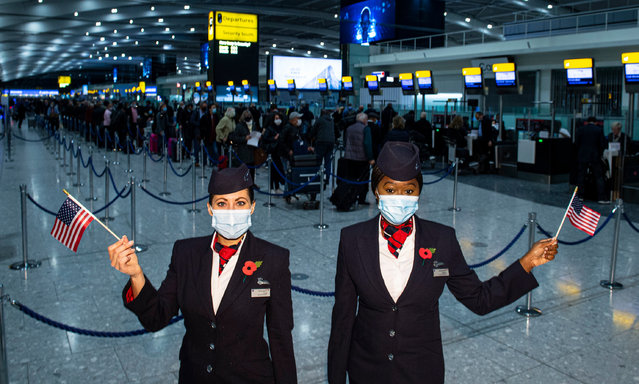 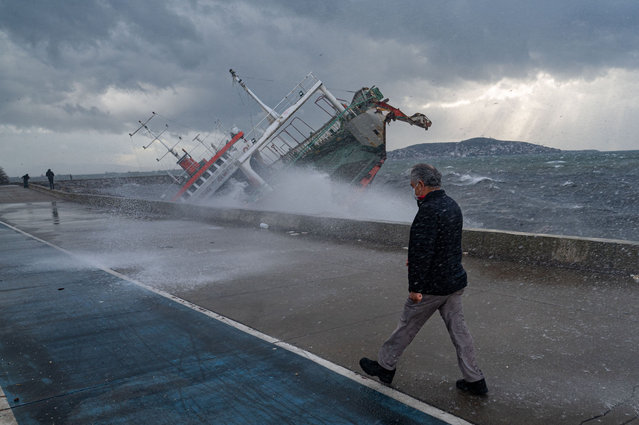 A man walks near a boat which has capsized due to strong winds in Istanbul on November 30, 2021. Strong winds continue to blow across Istanbul where the Bosphorus strait is temporarily closed to boat traffic. Four people were killed and dozens injured on Monday in Istanbul, which was hit by high winds. (Photo by Yasin Akgul/AFP Photo) 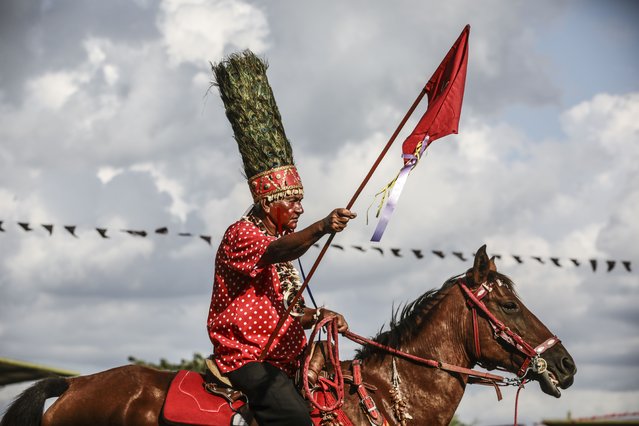 People in costumes take part in the “Cuadrillas de San Martin” parade in San Martin de Los Llanos, Meta, Colombia, on November 15, 2021. Every year, this demonstration brings 48 horsemen who are divided into four gangs which represent four races that have important roles in Colombian history: Arabs or Moors, Spaniards or gallants, African blacks, and Guahibo Indians. The tradition has been held annually since 1735 when the priest Gabino de Balboa created the crews to represent the sacramental acts of the fights between Moors and Christians. (Photo by Juancho Torres/Anadolu Agency via Getty Images) 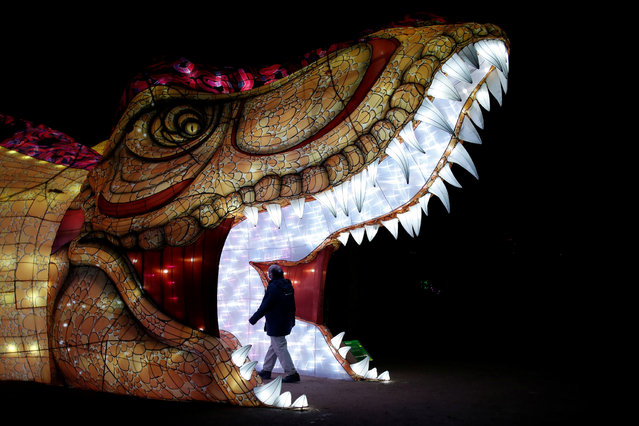 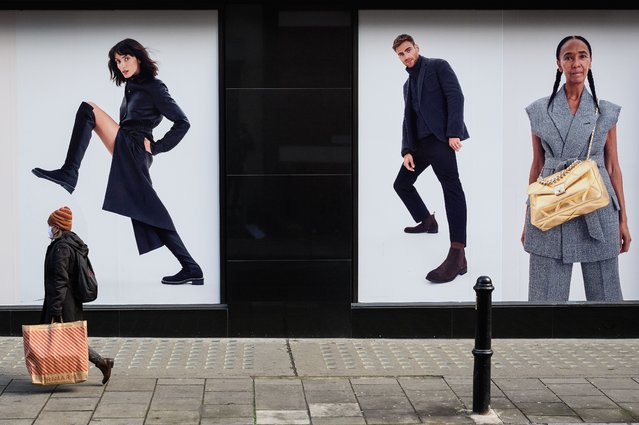 A model in an advertisement appears to step on shoppers in the retail district near Oxford Circus as the annual Black Friday sale event arrives, on November 26, 2021 in London, England. In-store Black Friday spending is expected to grow by 7.3 per cent in the UK this year. (Photo by Leon Neal/Getty Images) 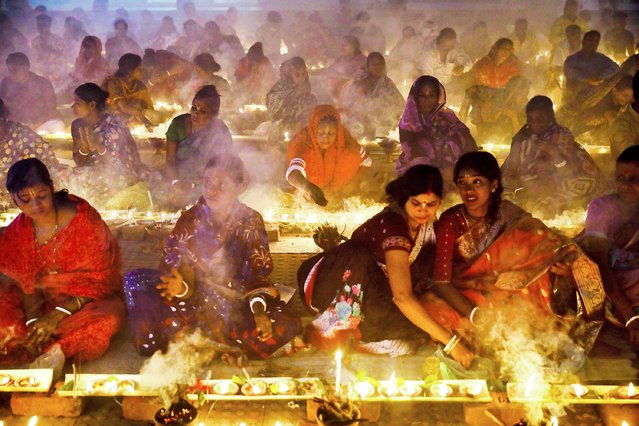 Hindu devotees sit together on the floor of a temple with oil lamps, praying to Lokenath Brahmachari, a Hindu saint, as they observe Rakher Upabash, in Narayanganj, Bangladesh, November 6, 2021. (Photo by Mohammad Ponir Hossain/Reuters) 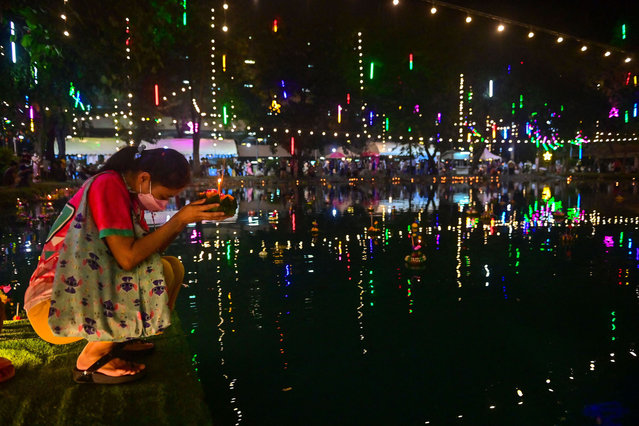 A woman sets a krathong into the water in Bangkok in November 19, 2021 during Loy Krathong, an annual festival in which floating decorative rafts are released into rivers and ponds across the country during the evening of the full moon of the 12th Thai lunar month. (Photo by Lillian Suwanrumpha/AFP Photo) 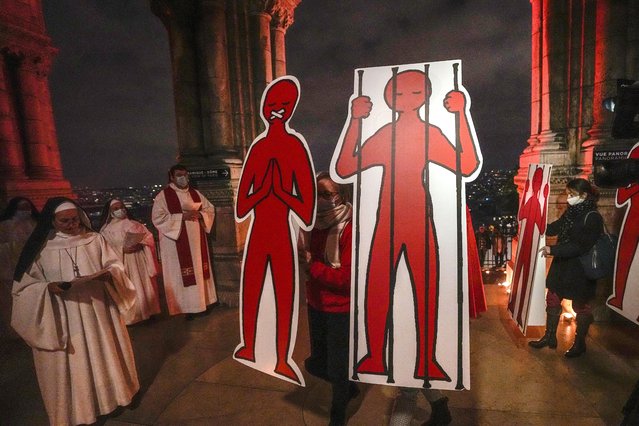 Members of Aide a l'Eglise en Detresse (aid to the church in distress) hold signs with silhouettes during a procession with catholic clergy in support of the persecuted Christians around the world at Sacre-Coeur Basilica in Paris, Wednesday, November 24, 2021. (Photo by Michel Euler/AP Photo) 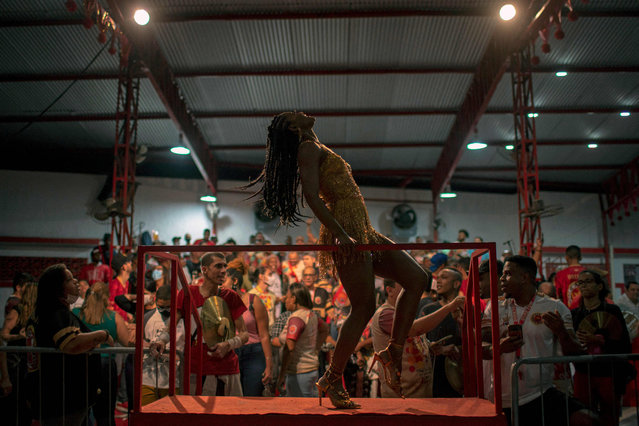 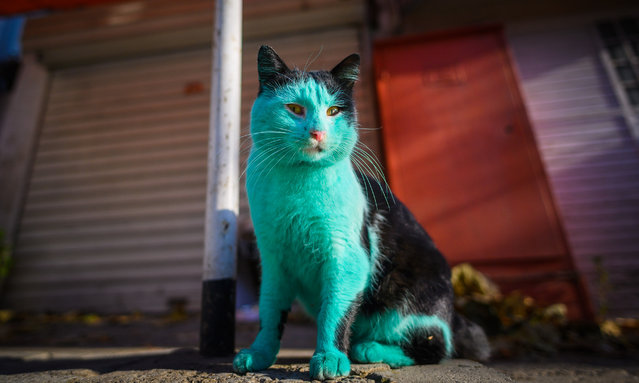 A green can has been spotted at the streets of Black sea town of Varna, Bulgaria on November 19, 2021. The can became emerald green because sleeps near a green paint in a building under construction. Four years ago another cat in the city became World news with the same color at the same place. Local veterinary Zdravko Zdravkov did check the health of the cat when is possible and it is normal he said. (Photo by Rex Features/Shutterstock) 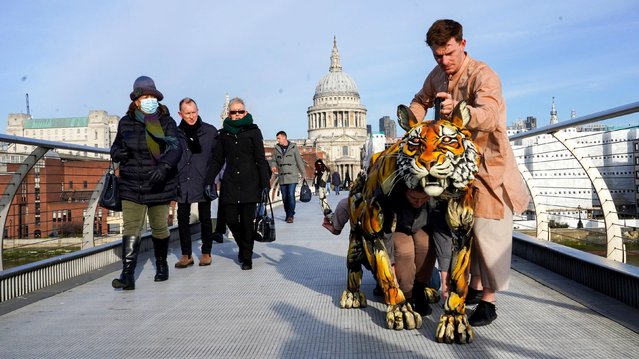 The puppet of a Royal Bengal Tiger from the stage production of The Life of Pi, operated by puppeteers Tom Larkin, Tom Stacy and Scarlet Wilderink, makes its way across Millenium Bridge in London to mark the upcoming West End premiere of the stage production at the Wyndham's Theatre in London on Monday, November 29, 2021. (Photo by Ian West/PA Images via Getty Images) 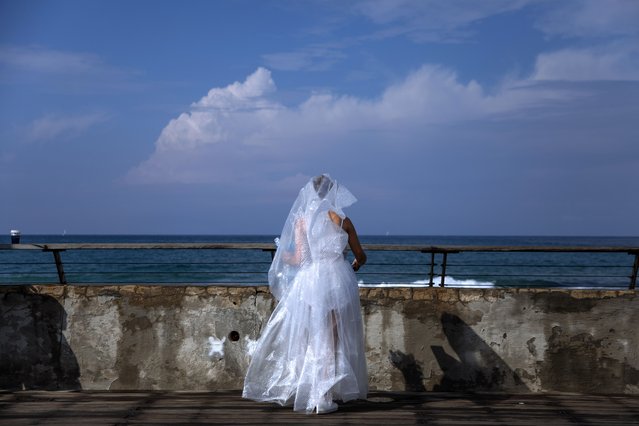 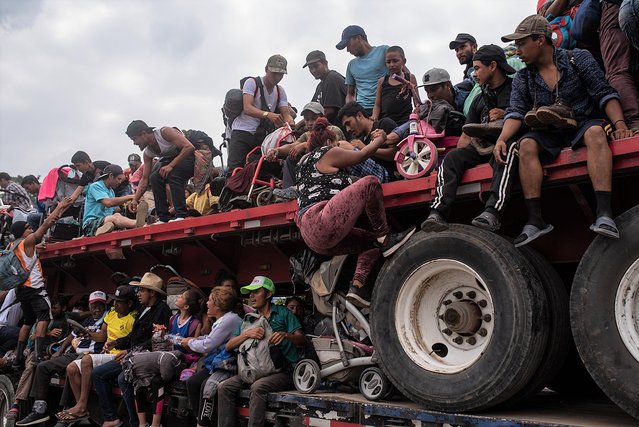 Central American migrants travel in trucks during their caravan to the north, in the municipality of Jesus Carranza, Veracruz state, Mexico, 17 November 2021. The caravan of Central American migrants heading to the United States rested on Wednesday after crossing the border of the western Mexican state of Veracruz at a slower pace, where they are guarded by a strong security device. (Photo by Angel Hernandez/EPA/EFE) 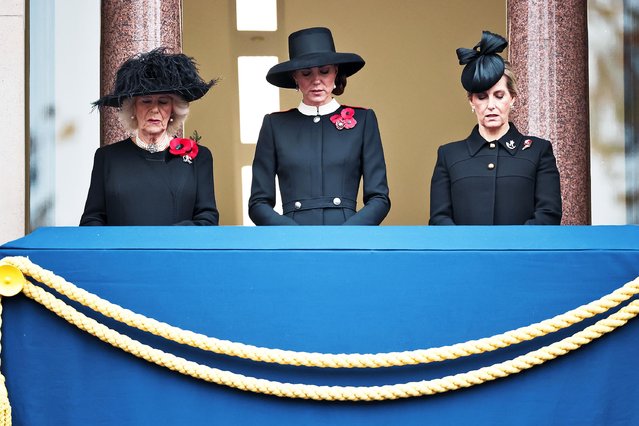 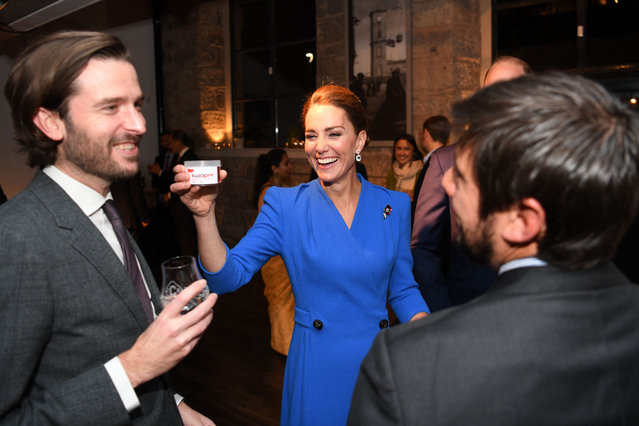 Britain's Catherine, Duchess of Cambridge (C) laughs as she offers a tub of dead larvae, used as livestock feed, to guests at a reception for the key members of the Sustainable Markets Initiative and the Winners and Finalists of the first Earthshot Prize Awards at the Clydeside Distillery, on the sidelines of the COP26 UN Climate Change Conference in Glasgow, Scotland on November 1, 2021. COP26, running from October 31 to November 12 in Glasgow will be the biggest climate conference since the 2015 Paris summit and is seen as crucial in setting worldwide emission targets to slow global warming, as well as firming up other key commitments. (Photo by Daniel Leal-Olivas/Pool via AFP Photo) 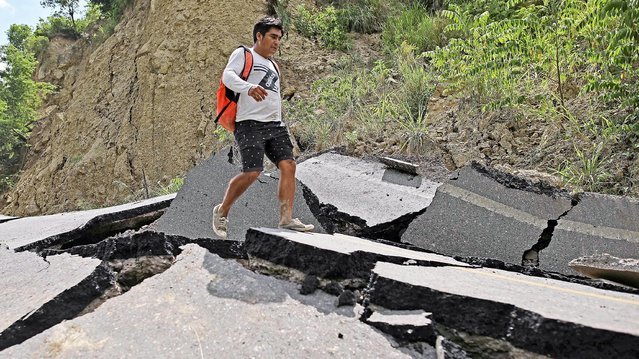 Handout picture released by the Peruvian presidency on November 29, 2021 showing a man in the northern Peruvian department of Amazonas walking along a road which was destroyed by a 7.5 magnitude earthquake that shook a remote area in the jungle of Peru on the eve. A 7.5-magnitude earthquake in northern Peru injured 12 people and destroyed 117 homes, leaving more than 2,400 people without a roof over their heads, authorities said Monday. The quake, which struck in the early hours of Sunday and sent shock waves across the region, also levelled five churches and damaged a clinic and some 1.5 km (0.93 miles) of roads. (Photo by Aldair Mejia/Peruvian Presidency/AFP Photo) 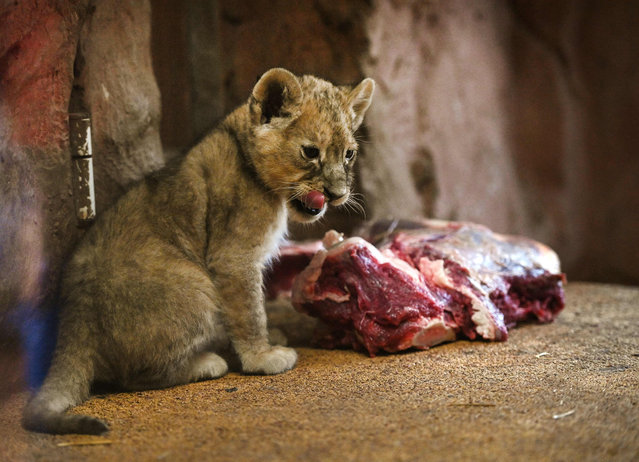 One of the lion triplets Jamila, Malaika and Kumani is seen in their enclosure at the ZOOM Erlebniswelt zoo in Gelsenkirchen, western Germany on November 15, 2021. The mother Fiona gave birth to the triple lion offspring on October 8, 2021 in the Gelsenkirchen Zoo. (Photo by Ina Fassbender/AFP Photo) 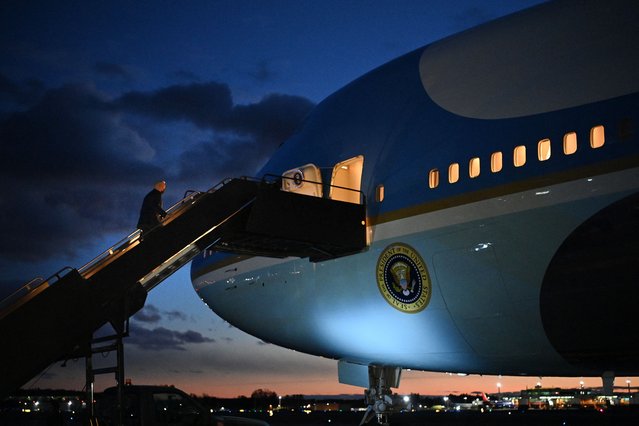