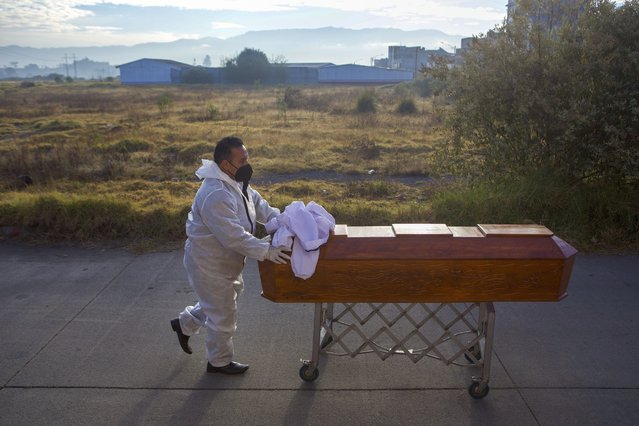 A man pushes the remains of his relative away from the morgue to take home in Quetzaltenango, Guatemala, Monday, December 20, 2021. A dozen people were slain Saturday in Chiquix, a village that has been involved in a years-long territorial dispute over water and land access with a nearby town, police said. (Photo by Oliver de Ros/AP Photo) 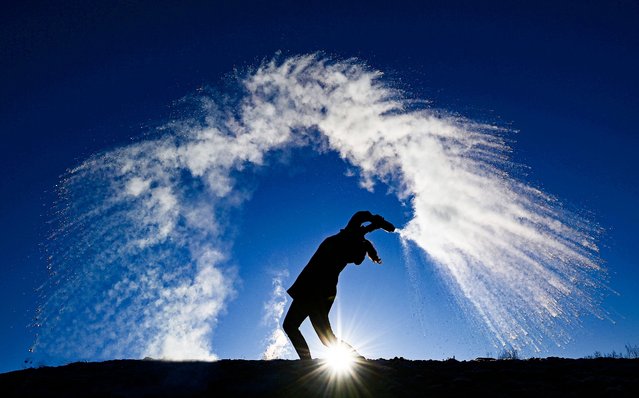 A woman throws hot water from a thermos bottle into the cold air making its three phases visible – liquid, gas, solid – as the smallest droplets cool and evaporate in a dramatic cloud before they reach the ground as snow, in Berlin on a sunny but frosty Boxing Day, on December 26, 2021. (Photo by Tobias Schwarz/AFP Photo) 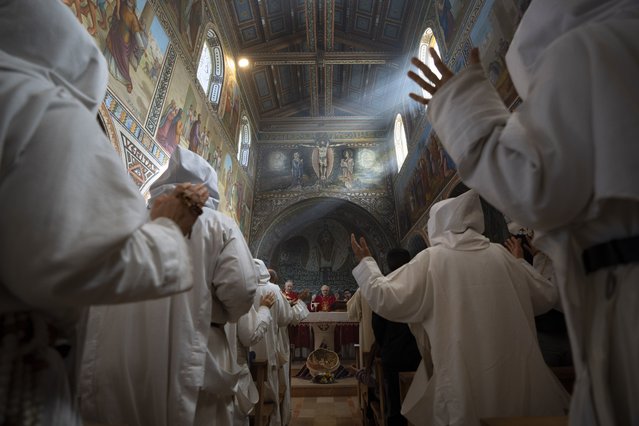 Catholic clergy pray during a service for St. Stephen's Day at the Beit Jamal Monastery near Beit Shemesh, Israel, Sunday, December 26, 2021. In many countries, Dec. 26 commemorates the life of St. Stephen, a Christian deacon in Jerusalem who is known for his work with the poor and revered as the first Christian martyr. (Photo by Oded Balilty/AP Photo) 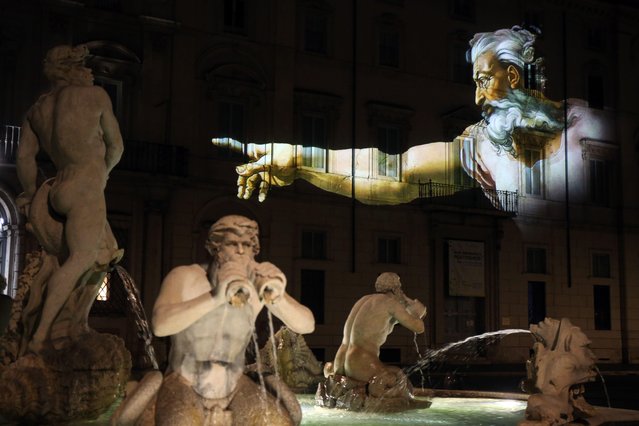 Masterpieces of the artistic Roman heritage are projected on the facade of the Palazzo Senatorio and Palazzo Pamphilj at Piazza Navona on December 28, 2021 in Rome, Italy. Until January 6, a series of artistic projections illuminate Palazzo Senatorio and Palazzo Pamphilj in Piazza Navona with images and lights displaying drawings of the protagonists of the Roman Renaissance of the project “Nascimento. Roman Inspiration” and works symbolically attributable to a “nativity” of the project “AmoR, che move..”. (Photo by Elisabetta A. Villa/Getty Images) 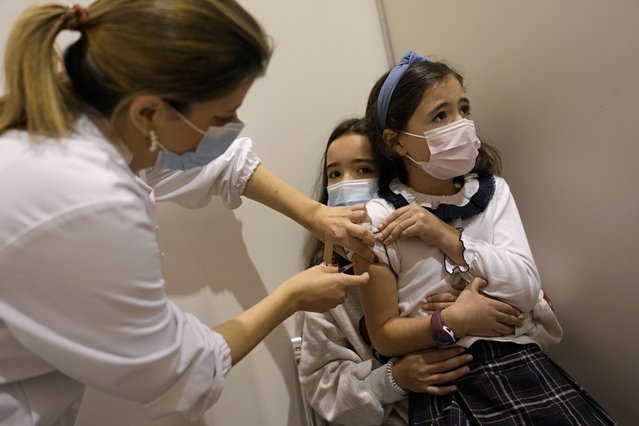 Maria do Carmo, 8, sits on the lap of her sister Madalena, 11, while nurse Catarina administers a dose of the vaccine against COVID-19, December 18, 2021. Despite vaccination rates that make other governments envious, Spain and Iberian neighbor Portugal are facing the hard truth that, with the new omicron variant running rampant, these winter holidays won't be a time of unrestrained joy. Portugal announced Tuesday, Dec. 21 a slew of new restrictions over Christmas and the New Year. (Photo by Armando Franca/AP Photo/File) 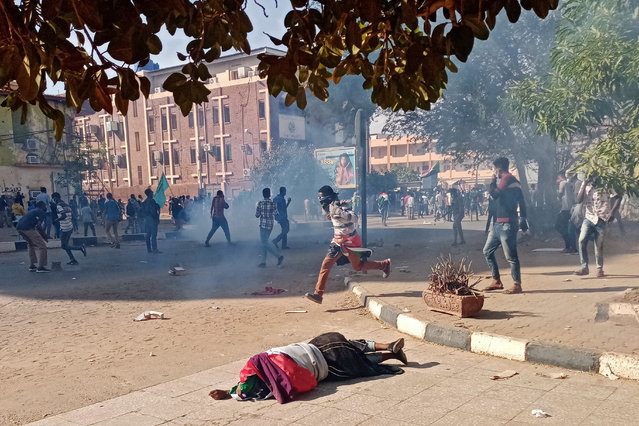 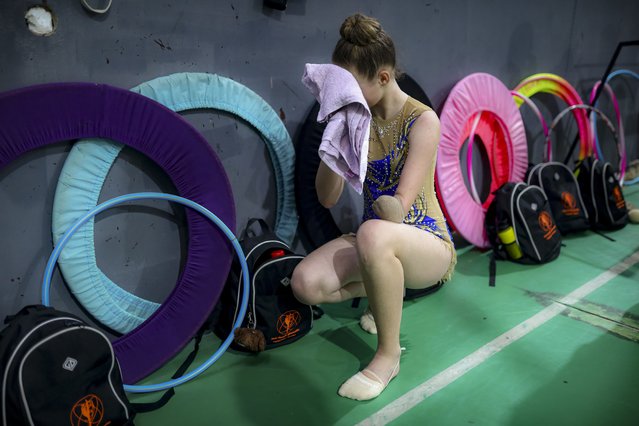 Sara Becarevic wipes her face during a training session in Visoko, Bosnia, Wednesday, December 1, 2021. In Bosnia, a poor, Balkan country which habitually marginalizes people with disabilities, a soon-to-be-14-year-old girl, born without her lower left arm, pursues her dream of becoming an internationally recognized rhythmic gymnast. Sara Becarevic says she got enchanted with the demanding sport as a toddler, while watching the world championships on television. (Photo by AP Photo/Stringer) 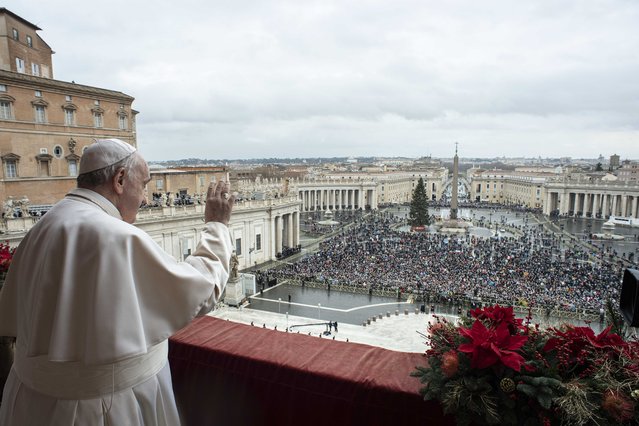 Pope Francis delivers the Urbi et Orbi (Latin for 'to the city and to the world' ) Christmas' day blessing from the main balcony of St. Peter's Basilica at the Vatican, Saturday, December 25, 2021. Pope Francis has used his Christmas Day address to pray for an end to the coronavirus pandemic. Amid a record-setting rise in COVID-19 cases in Italy this week, only a few thousand people flocked to a rain-soaked St. Peter’s Square for Francis’ annual “Urbi et Orbi” (“To the city and the world”) Christmas address on Saturday. (Photo by Vatican Media via AP Photo) 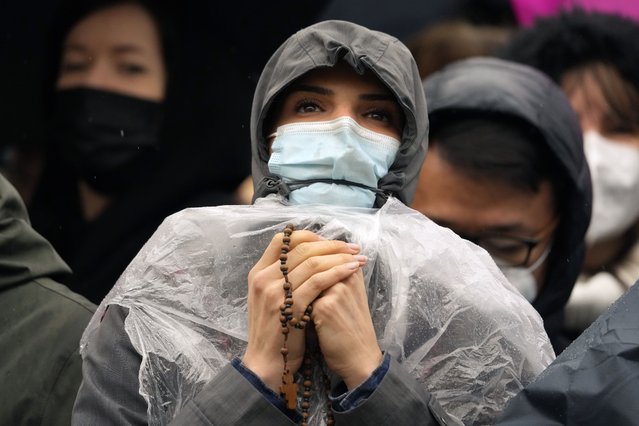 A woman holding a rosary waits for Pope Francis to deliver the Urbi et Orbi (Latin for “to the city and to the world”) Christmas day blessing from the main balcony of St. Peter's Basilica at the Vatican, Saturday, December 25, 2021. (Photo by Gregorio Borgia/AP Photo) 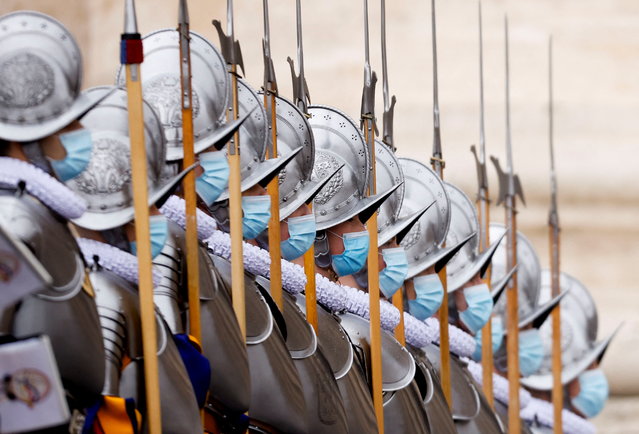 Members of the Pontifical Swiss Guard stand by at St. Peter's Square before Pope Francis delivers his traditional Christmas Day Urbi et Orbi speech to the city and the world from the main balcony of St. Peter's Basilica at the Vatican, December 25, 2021. (Photo by Yara Nardi/Reuters) 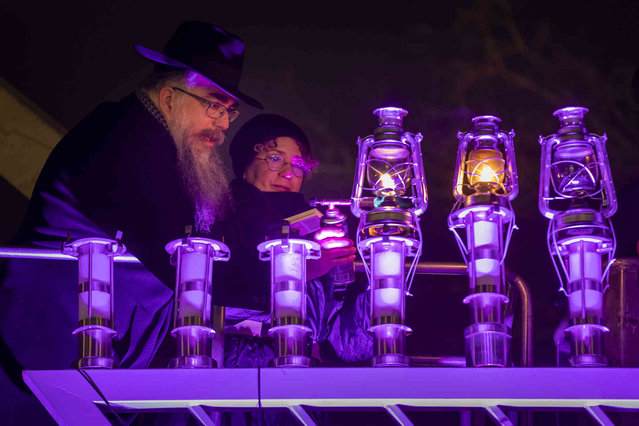 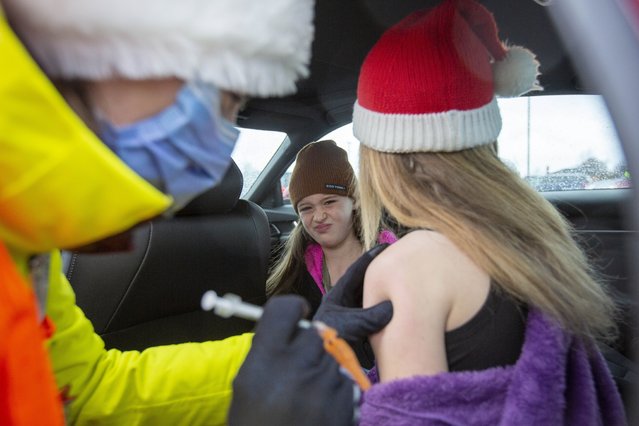 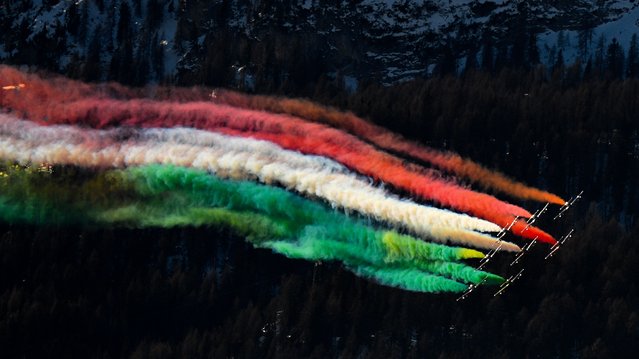 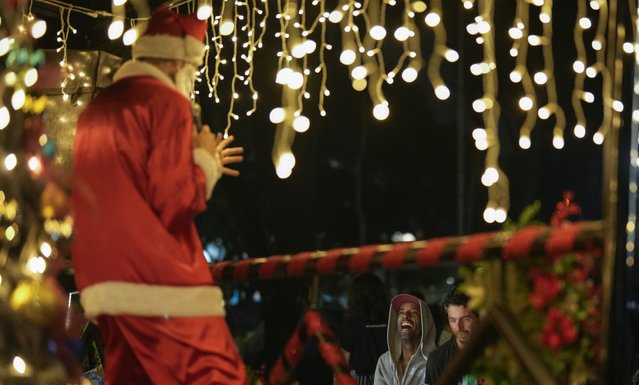 A man dressed as Santa Claus performs during a Christmas event by the Sao Paulo Invisible NGO that hands out food to the homeless in Sao Paulo, Brazil, Tuesday, December 21, 2021. (Photo by Andre Penner/AP Photo) 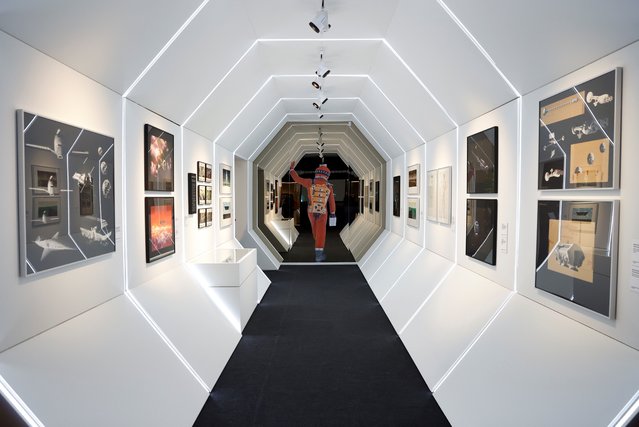 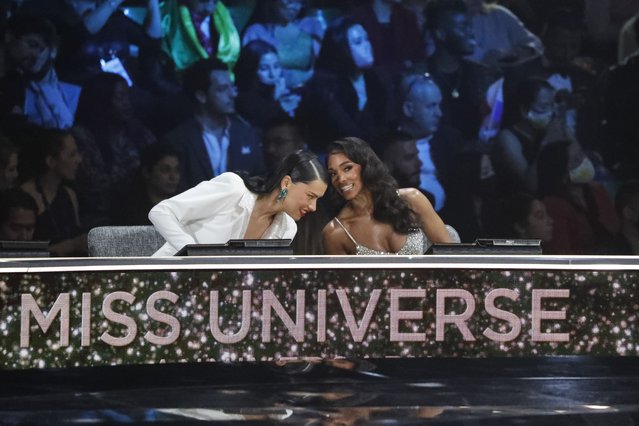 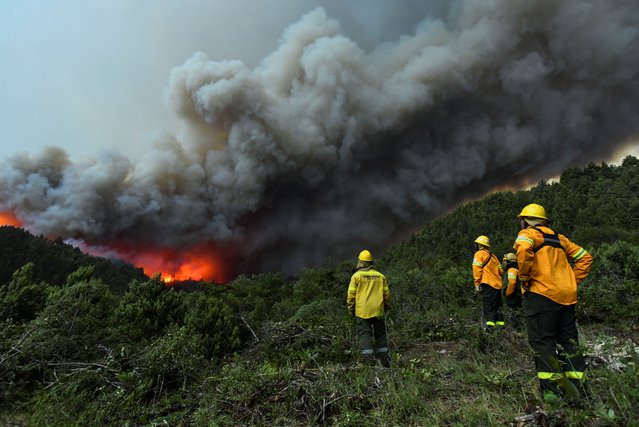 Fire brigades look at the forest during fires in Bariloche, Argentina on December 29, 2021. (Photo by Marcelo Martinez/Reuters) 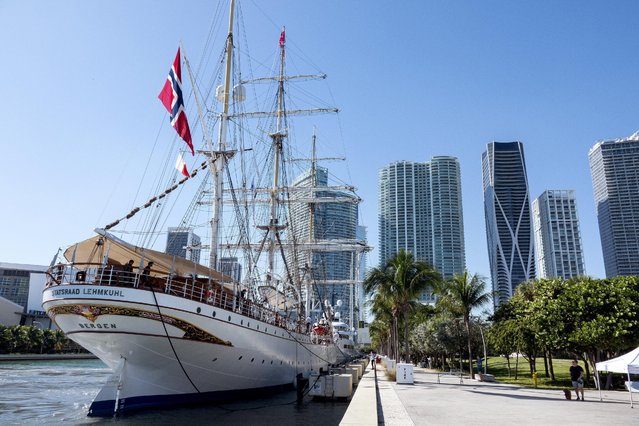 The tall ship Statsraad Lehmkuhl is docked at the Maurice A. Ferre boat slip in Miami, Florida, USA, 07 December 2021. The 107-year-old Norwegian ship is doing a 20-month voyage, the One Ocean Expediton, as part of the UN Decade of Ocean Science for Sustainable Development. The journey kicked off in August in Arendal, Norway, and will visit 36 ports around the globe. (Photo by Cristobal Herrera-Ulashkevich/EPA/EFE) 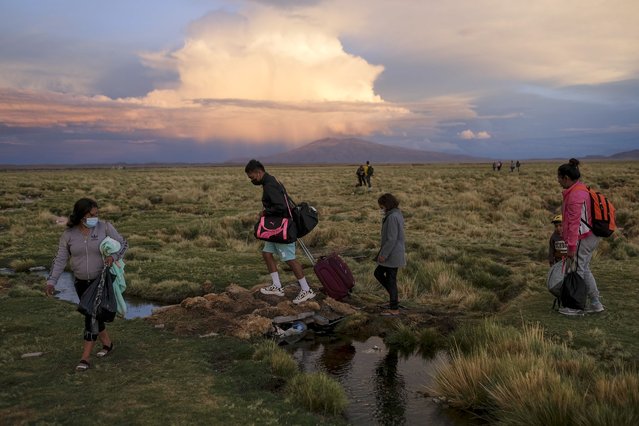