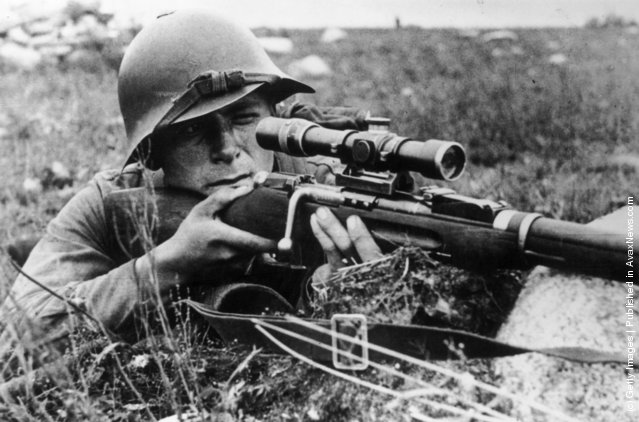 7th August 1941: A Soviet sniper targets the enemy with the telescopic sight on his rifle. 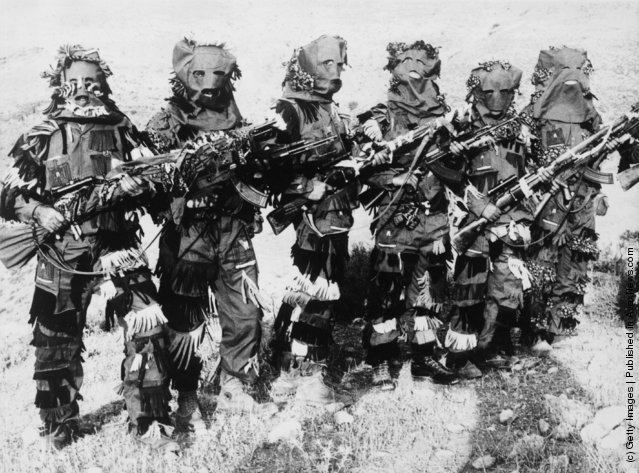 7th October 1969: A group of guerrilla snipers of the Action Organisation, Palestinian commandos, trained to watch the movements of Israeli forces in the Jordan river valley and react at a moment's notice. 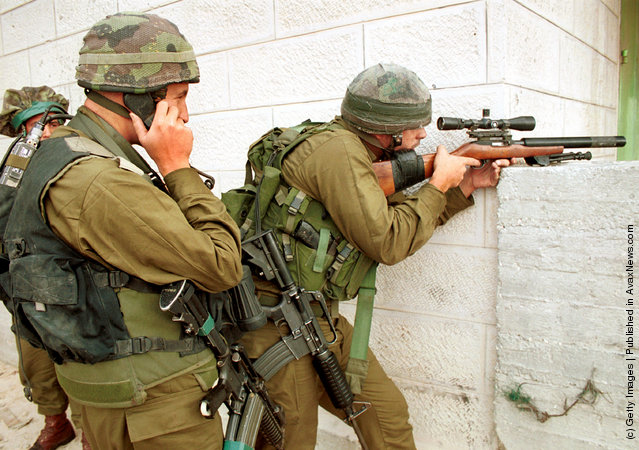 An Israeli army sniper fires a rifle fitted with a silencer at stone-throwing Palestinians October 16, 2000 during clashes on the outskirts of the West Bank town of Ramallah. 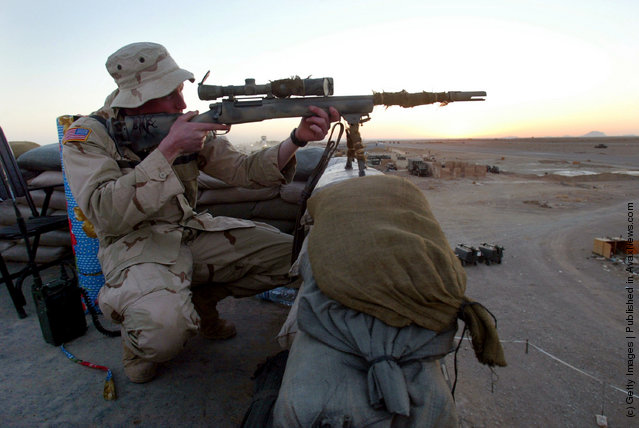 Rifleman Justin Bosse, 26, of the101st Airborne of the U.S. Air Force, from Richards, Texas mans the sniper nest with his M-24 sniper rifle February 4, 2002 at the air base in Kandahar, Afghanistan. Soldiers of the Princess Patricias Canadian Light Infantry arrived at the airport a day before to as part of the first contingent of 750 soldiers who will join Operation Apollo in Afghanistan. 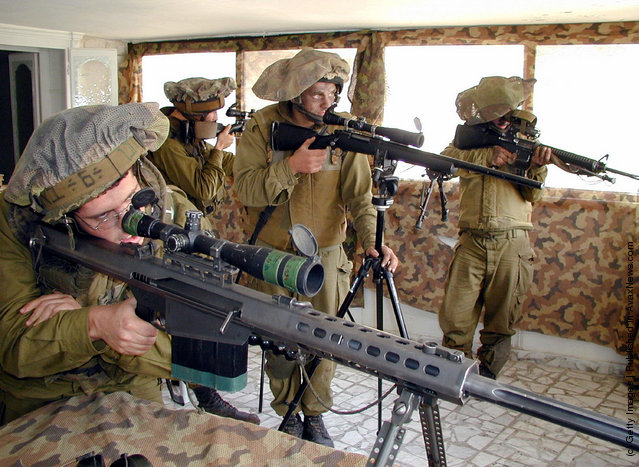 Israeli army snipers search out Palestinian gunmen April 9, 2002 during fighting in the refugee camp in the West Bank town of Jenin, during its 'Defensive Shield' operation. Palestinians have accused Israel of a massacre of civilians in the town's refugee camp, but Israel says the deaths and destruction resulted from gunbattles between its soldiers and Palestinian gunmen. 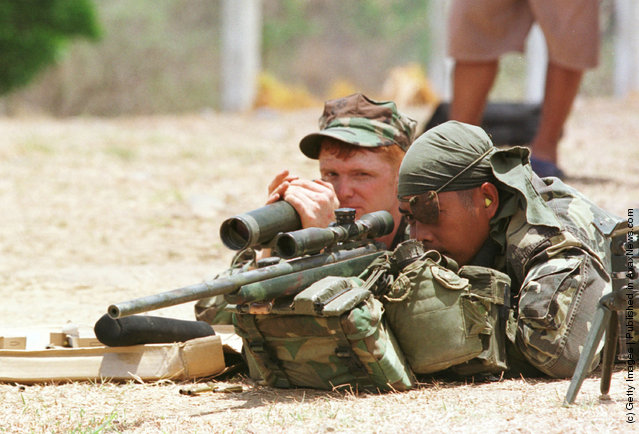 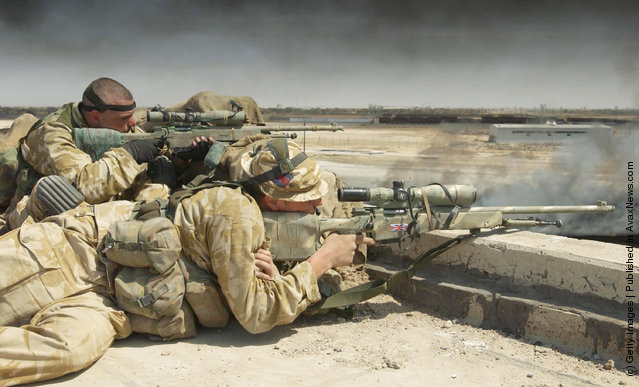 In this hand out image by the British Defence Ministry, Lance Sergeant Chris Briggs and Guardsman Warren Bradford serve as a snipers with Support Company attached to Number 1 Company 1st Battalion The Irish Guards April 3, 2003 in Basra, Iraq. In a dawn raid on a university factory complex within sight of their patrol base at Bridge Four on the outskirts of Basra, the Irish Guards attacked and cleared the base after coming under fire from small arms mortars and SAM Missile systems, which were fired from Iraqi positions at a British Lynx Helicopter supporting the Irish Guards. Briggs and Bradford are one of four sniper pairs set up within the buildings to provide covering fire for the Royal Engineers attempting to put out one of the numerous oil well fires. 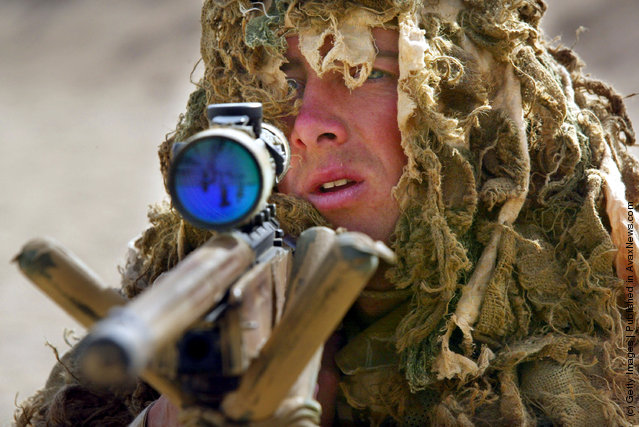 Marine Alasdair Kane, a British Royal Marine soldier from the 42nd Commando Lima Brigade, goes through training exercises in camouflage using a .338 sniper rifle March 10, 2003 in the desert 70 kilometers from Kuwait city near the Iraqi border. There are approximately 30,000 British troops who have joined U.S. forces in Kuwait, preparing for a possible war with Iraq. The U.S. and Britain have maintained that Iraq has until March 17, 2003 to completely disarm or face war. 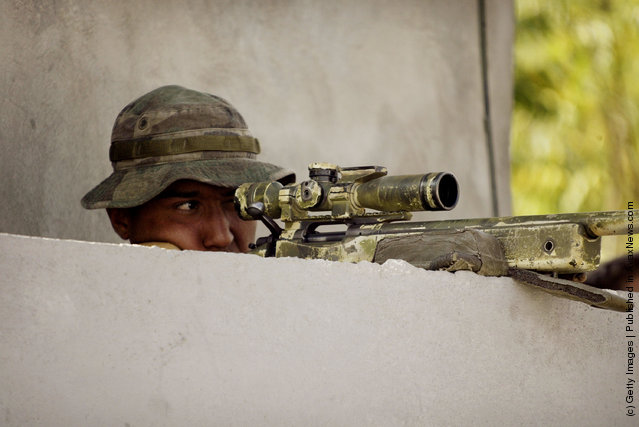 A United States Marine scout sniper looks through the scope of his rifle as he is perched above a gate of the industrial park March 12, 2004 in Port-au-Prince, Haiti. Marines have been guarding the industrial park in an attempt to stop the heavy looting in the area
. 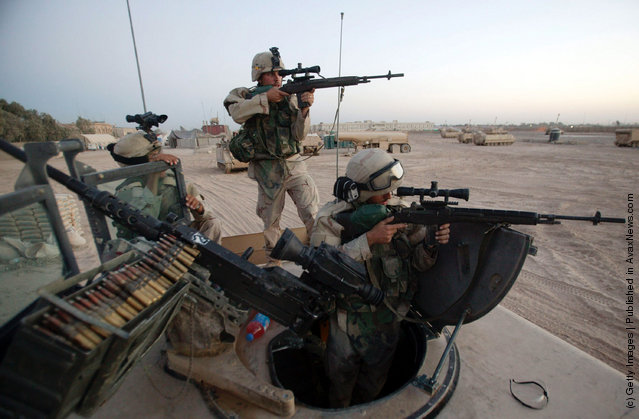 U.S. Army snipers Aaron McAlister (C standing) and Chuck Ayars (R), with the 1st Cavalry Division, 1st Brigade, 1-12 Cav. from Fort Hood, Texas, take aim at a suspected enemy observer looking in at Camp Eagle from a neighborhood outside of Sadr City August 16, 2004 Baghdad, Iraq. McAlister is from Maypearl, Texas and Ayars is from Nashville, Tennessee. 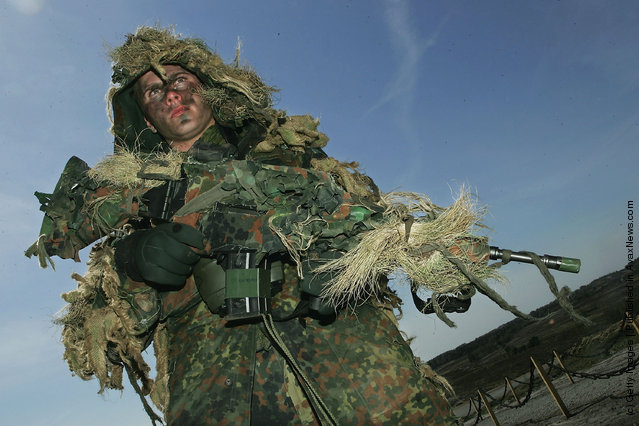 A camouflaged German army sniper participates in the European Challenge 2005 joint military exercises on April 20, 2005 in Bergen, Germany. The exercises brought together 3,500 troops from 24 nations. 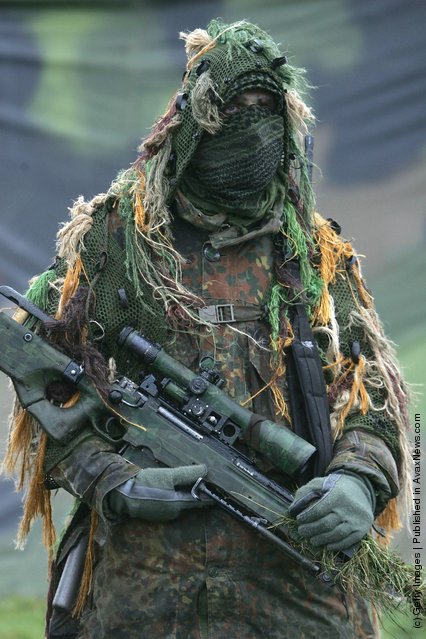 A camouflaged sniper of the German Lutfwaffe participates in a capabilities demonstration during the visit of German Defense Minister Franz Josef Jung January 17, 2006 at the Luftwaffe airbase at Wittmundhafen, Germany. It is Jung's first visit to a Luftwaffe facility since he took office in November 2005. A police sniper keeps a watchful eye outside the completed Frauenkirche Cathedral October 30, 2005 in Dresden, Germany, on the day of the cathedral's official opening to the public. The Frauenkirche, destroyed by Allied bombing during World War II, became a symbol of the misery endured by the German civilian population during the war. After the reunification of Germany reconstruction of the mammoth building began in 1994 and was made possible by private donations from all over the world. 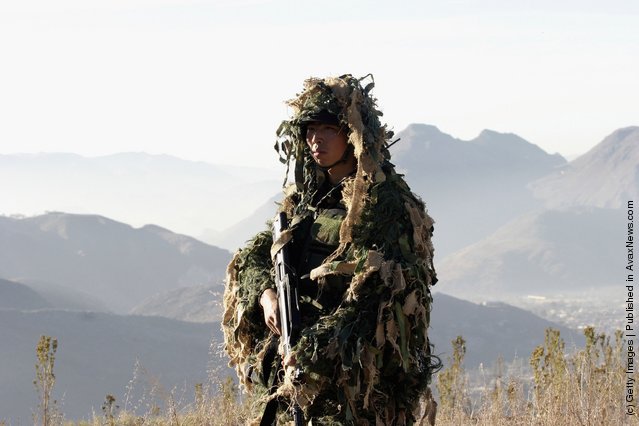 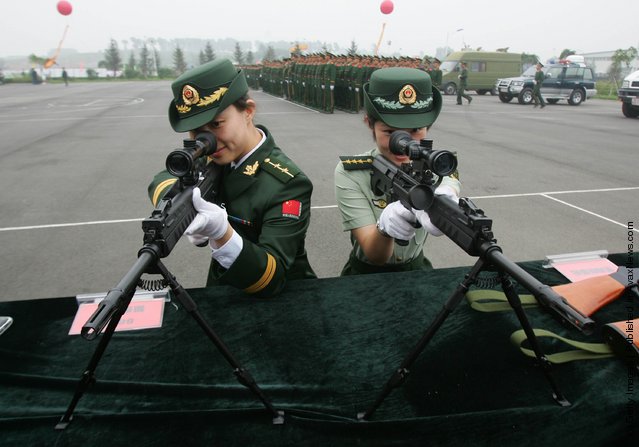 Women police officers take aim with sniper rifles during the Jilin Provincial Armed Police Corps of Frontier Defence open-day on July 31, 2007 in Changchun of Jilin Province, China. The corps held the open day today to display their new equipment and to promote better understanding between armed police and local residents. 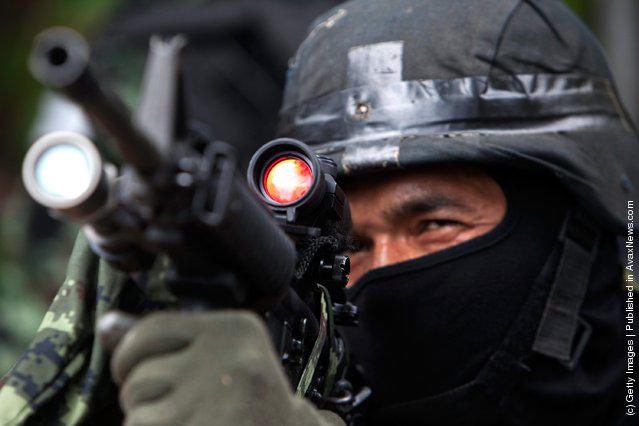 A sniper monitor movement during a clashes on May 19, 2010 in Bangkok, Thailand. The operation was to finally get the protesters out after a six week takeover of Bangkok's major shopping district. So far today's attack killed five and over 64 were injured as the redshirts finally surrendered to the authorities. Many redshirts went onto set fire to buildings as Bangkok burns. As of today 70 have been killed in over six weeks.
Edit Del
16 Apr 2011 18:38:00, post received 0 comments
Publication archive:
←   →
Popular tags:
All tags
Last searches: