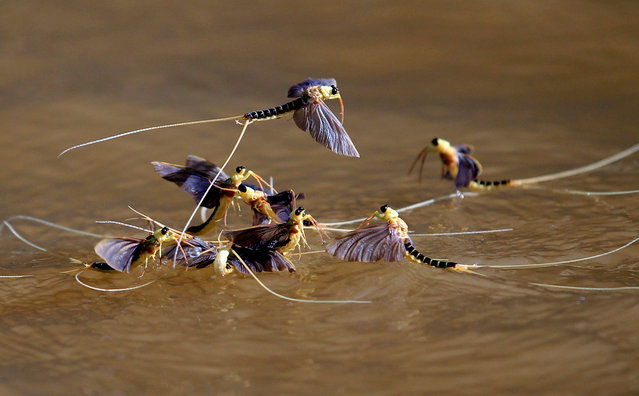 Long-tailed mayflies (Palingenia longicauda) mate on the surface of the Tisza river near Tiszainoka, Hungary, on June 20, 2012. (Photo by Laszlo Balogh/Reuters) 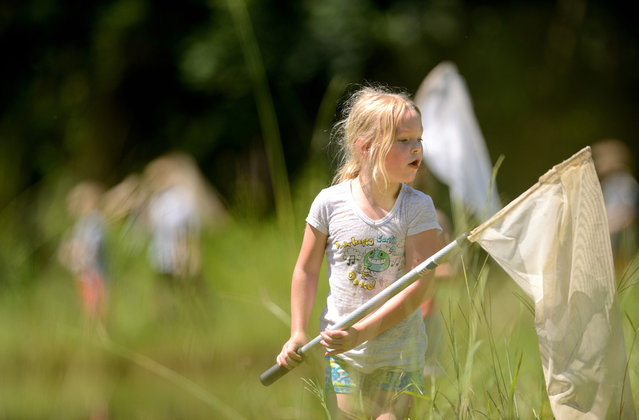 Third-grader Elsie Andre peers into her net to see if she captured a dragonfly as part of Ecology Day Camp at the University of Mississippi Biological Field Station in Abbeville, Mississippi, on June 13, 2012. The camp, which is held each summer, features a curriculum focused on the importance of the natural world through various outdoor activities. (Photo by Nathan Latil/AP Photo/University of Mississippi) 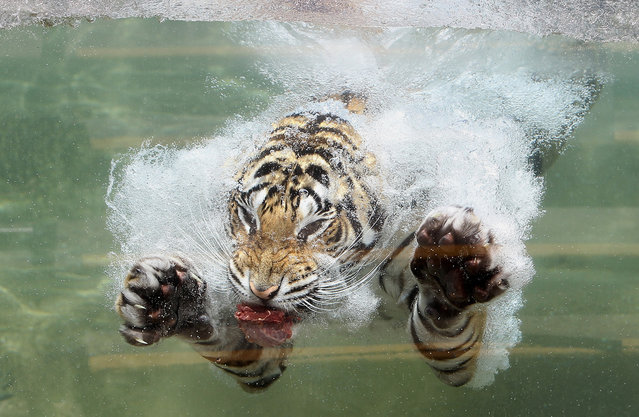 A Bengal Tiger named Akasha dives into the water after a piece of meat at Six Flags Discovery Kingdom on June 20, 2012 in Vallejo, California. On the first day of summer, temperatures in the San Francisco Bay Area ranged from the mid seventies by the coast to mid nineties inland. (Photo by Justin Sullivan) 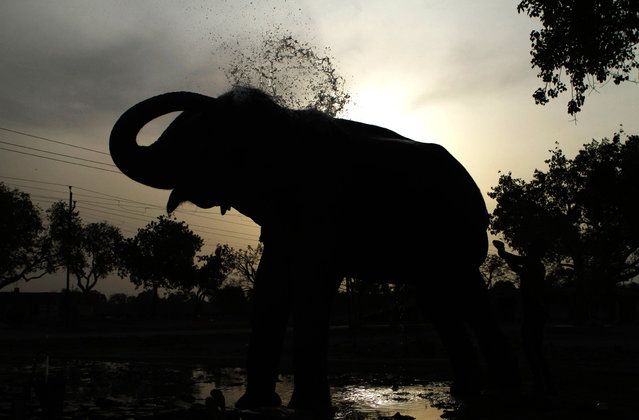 An Indian mahout bathes his elephant on a hot summer day in Allahabad, India, on June 18, 2012. Northern India has been sweltering under extreme heat as maximum temperatures hovered around 45 degrees Celsius (113F) in some areas. (Photo by Rajesh Kumar Singh/AP Photo) 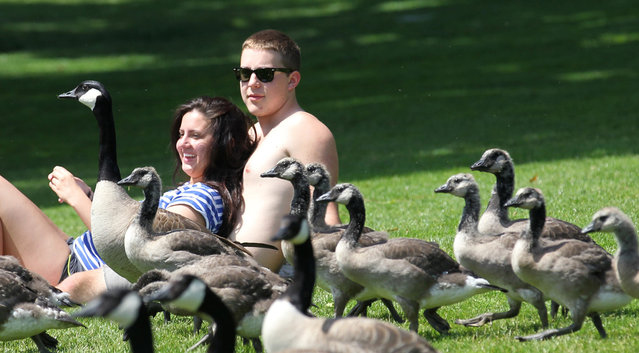 Wyatt Taylor and Marci Hohner lay in the sun as young geese surround them on June 20, 2012, in Portland, Oregon. (Photo by Rick Bowmer/AP Photo) 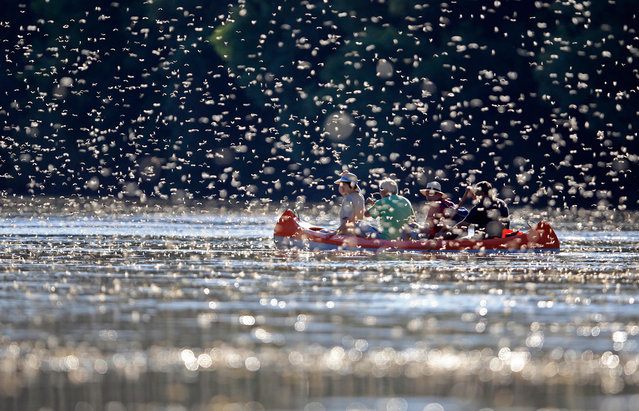 Long-tailed mayflies (Palingenia longicauda) fly over the surface of the Tisza river near Tiszainoka, 135km (84 miles) southeast of Budapest, on June 20, 2012. Millions of these short-lived mayflies engage in a frantic rush to mate and reproduce before they perish in just a few hours during “Tiszaviragzas” or Tisza blooming season from late spring to early summer every year. (Photo by Laszlo Balogh/Reuters) 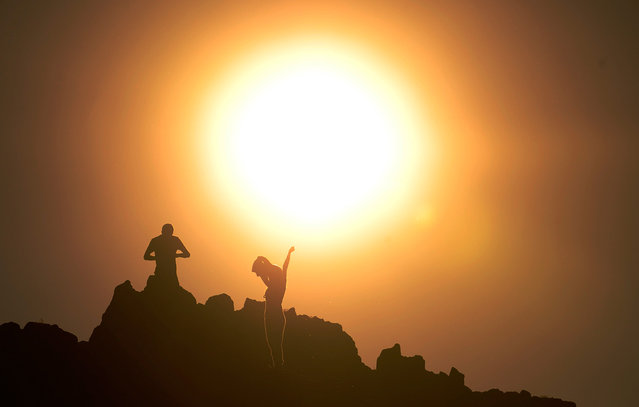 A couple celebrates summer solstice at a stone carved solstice marker at the Kokino megalithic observatory, on June 20, 2012. The 3,800-year-old observatory was discovered in 2001 in the northwestern town of Kumanovo, 70 km (43 miles) north of Skopje, and is ranked the fourth oldest observatory in the world, according to NASA. (Photo by Ognen Teofilovski/Reuters) 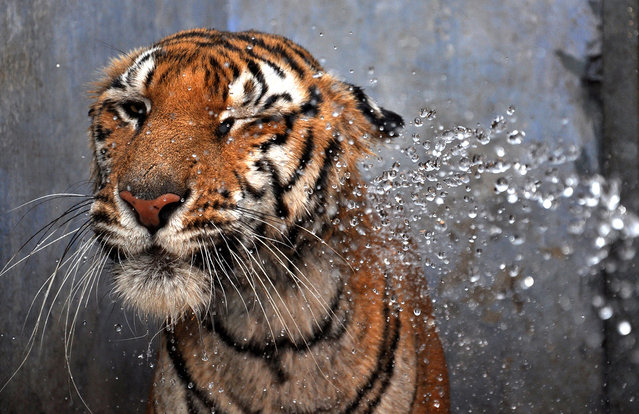 A Bengal tiger, sprayed with water by a zookeeper on a hot summer day at the Birsa Munda Zoological Park in Ranchi, India, on May 30, 2012. Zoo authorities are helping the animals cope with temperatures in excess of 40 degrees Celsius (104F) by providing coolers, special roofs and regular hose-downs. (Photo by STR/AFP) 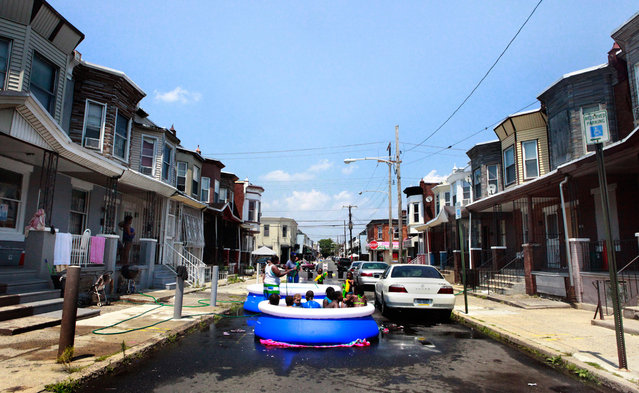 Residents block cars and set up a pool on the street on June 20, 2012, in Philadelphia. Temperatures climbed toward the high 90s along the Eastern Seaboard as an unusually early hot spell heralded the official start of summer. (Photo by Brynn Anderson/AP Photo) 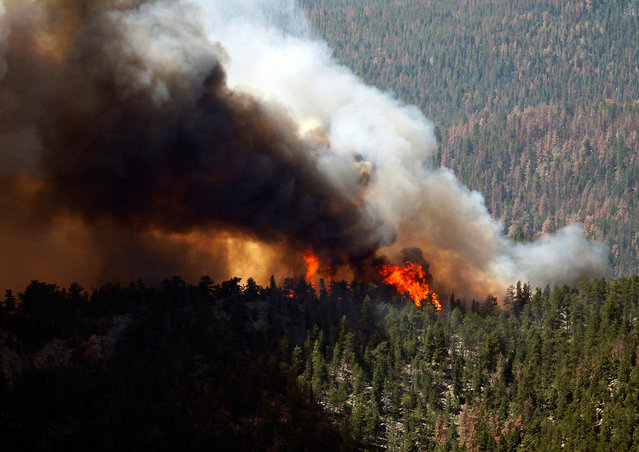 Fire rages through the forest in the High Park fire west of Fort Collins, Colorado, on June 19, 2012. Eight more homes were lost in the Colorado wildfire that is the state's most destructive on record and which continued to rage dangerously close to a residential subdivision as winds stoked the flames. (Photo by Rick Wilking/Reuters) 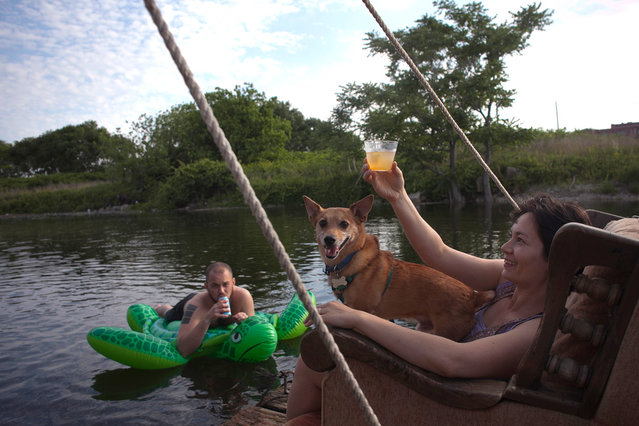 Guests enjoy drinks while floating along the waters of the Boatel in New York, on June 1, 2012. The Boatel, an artist-run hotel built out of more than a dozen discarded boats at Marina 59 in Far Rockaway, offers a sanctuary from nearby John F. Kennedy International Airport and the buzz of New York City. (Photo by Allison Joyce/Reuters) 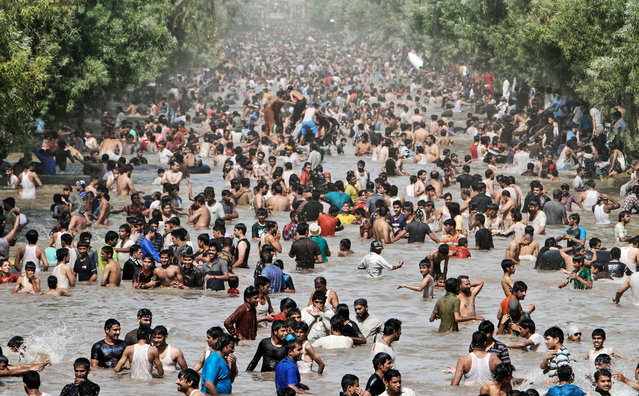 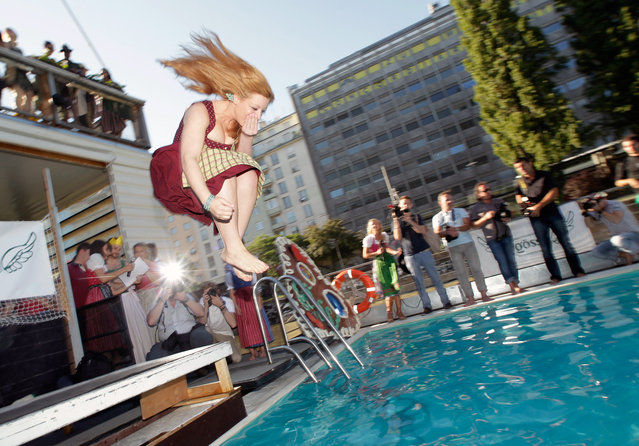 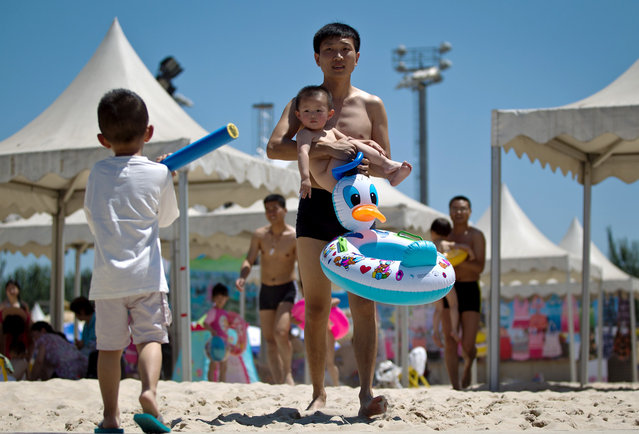 A man carries a child across a manmade beach at a park during summer in Beijing, on June 16, 2012. (Photo by Andy Wong/AP Photo) 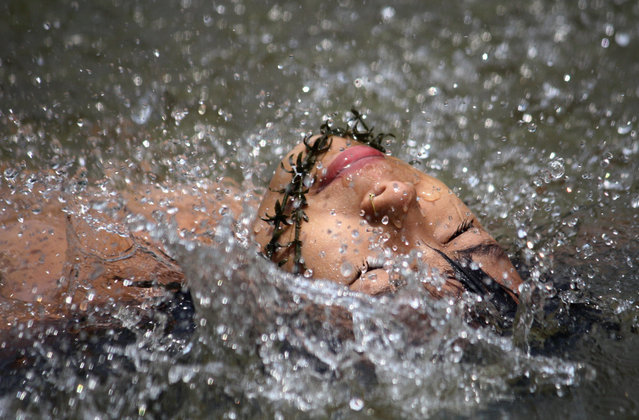 An Indian youth swims in the Dhansari river as she cools off during a hot summer day in Dimapur, India's northeastern state of Nagaland, on May 19, 2012. (Photo by STR/AFP) 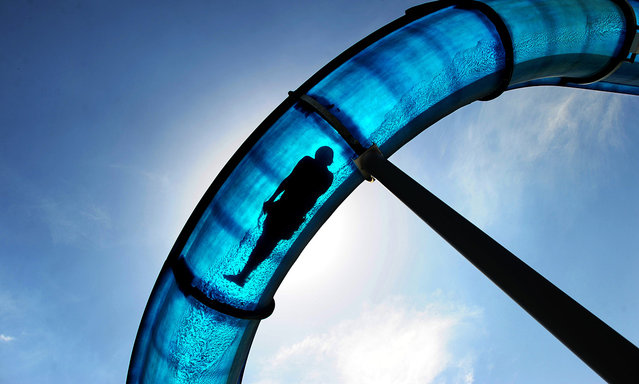 A boy slips down a waterslide in the German city of Hameln on May 22, 2012 as temperatures rose to up to 30 degrees Celsius (86F). (Photo by Julian Stratenschulte/AFP) 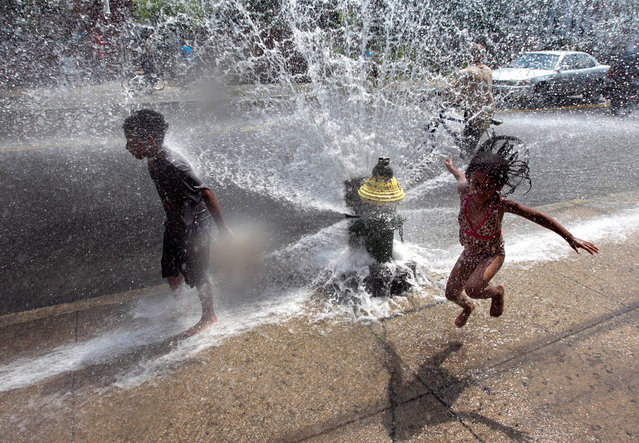 Four-year-old Solaris Arias (right) jumps through water spraying from an open fire hydrant in Providence, Rhode Island, on June 20, 2012. Much of the state remained under a heat advisory Tuesday afternoon because of the steamy air mass that has moved into the region resulting in temperatures in the 90s. (Photo by Steven Senne/AP Photo) 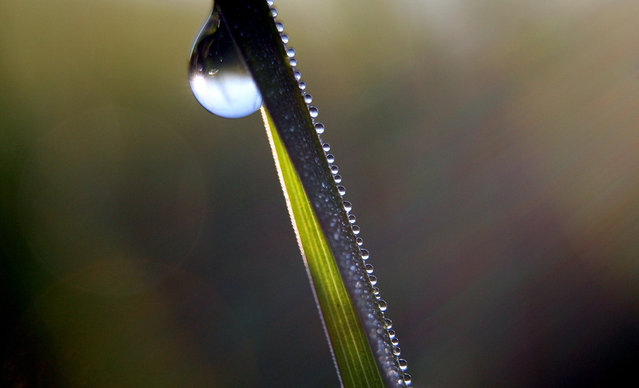 Dewdrops run down a blade of grass on June 18, 2012 near Trauchgau, Germany. (Photo by Karl-Josef Hildenbrand/AFP) 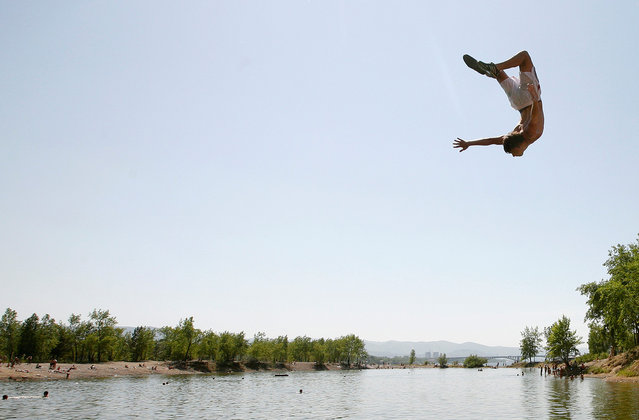 A man jumps into a lake, located on the Tatyshev Island in the middle of the Yenisei River, with the air temperature at about 30 degrees Celsius (86F) in Russia's Siberian city of Krasnoyarsk, on June 14, 2012. (Photo by Ilya Naymushin/Reuters)
Edit Del
17 Aug 2012 09:19:00, post received 0 comments
Publication archive:
←   →
Popular tags:
All tags
Last searches: