Singer Rihanna prepares for a photoshoot with photographer Annie Leibovitz in Havana, Cuba, May 28, 2015. (Photo by Reuters/Stringer) 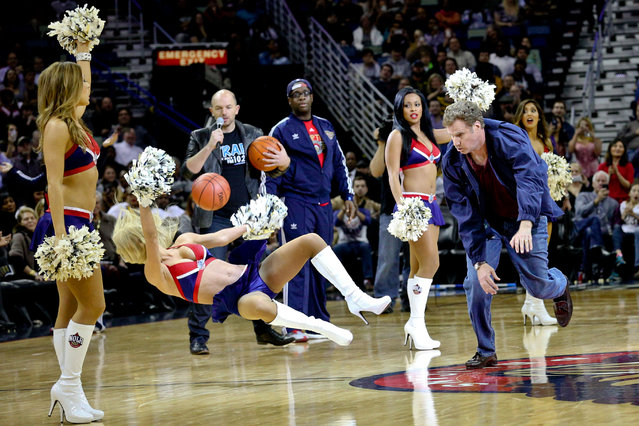 Will Ferrell hits an actress playing a member of the New Orleans Pelicans dance team with a ball during a stunt filmed for the movie “Daddy's Home” at halftime of a game against the Los Angeles Lakers in New Orleans, January 21, 2015. (Photo by Derick E. Hingle/USA TODAY Sports) 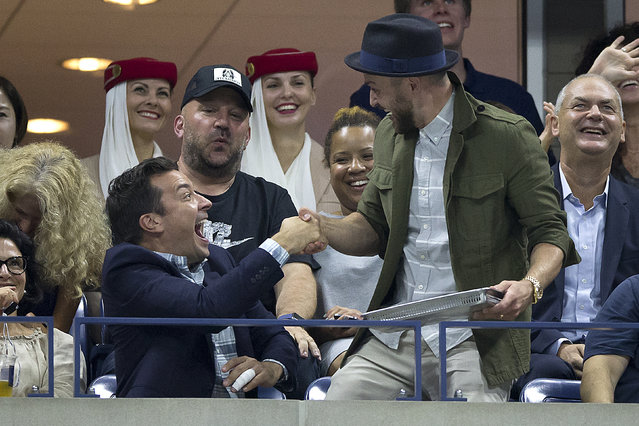 Jimmy Fallon and Justin Timberlake play around as they are shown on a video screen at the quarterfinals match between Roger Federer of Switzerland and Richard Gasquet of France at the U.S. Open Championships tennis tournament in New York, September 9, 2015. (Photo by Carlo Allegri/Reuters) 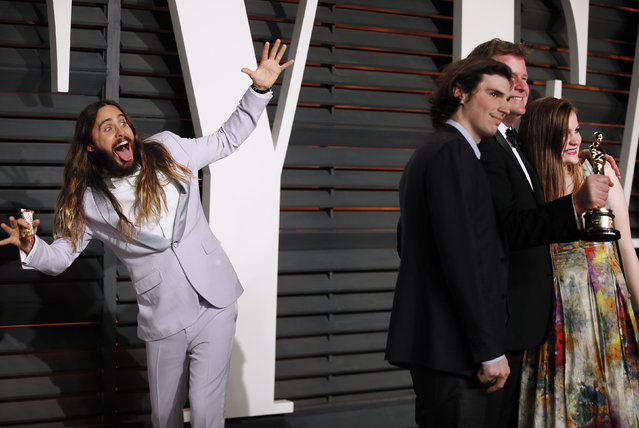 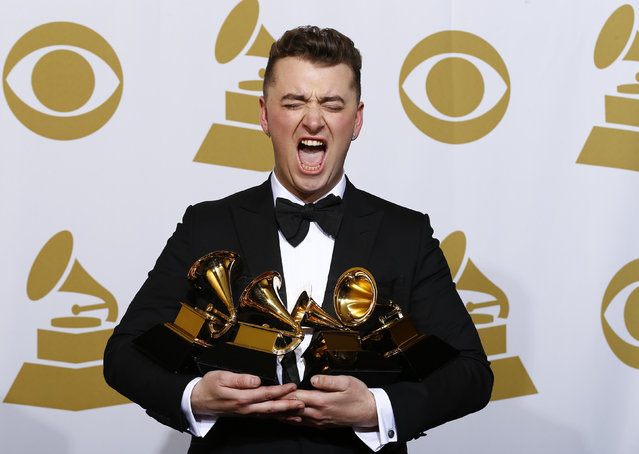 Sam Smith poses with his awards for Best New Artist, Best Pop/Vocal Album for “In the Lonely Hour” and Song of the Year and Record of the Year for “Stay With Me” in the press room at the 57th annual Grammy Awards in Los Angeles, February 8, 2015. (Photo by Mike Blake/Reuters) 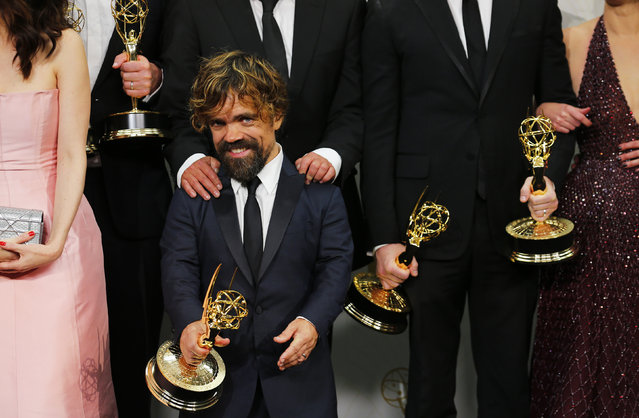 Peter Dinklage and the cast of HBO's “Game of Thrones” pose backstage with their Outstanding Drama Series award during the 67th Primetime Emmy Awards in Los Angeles, September 20, 2015. (Photo by Mike Blake/Reuters) 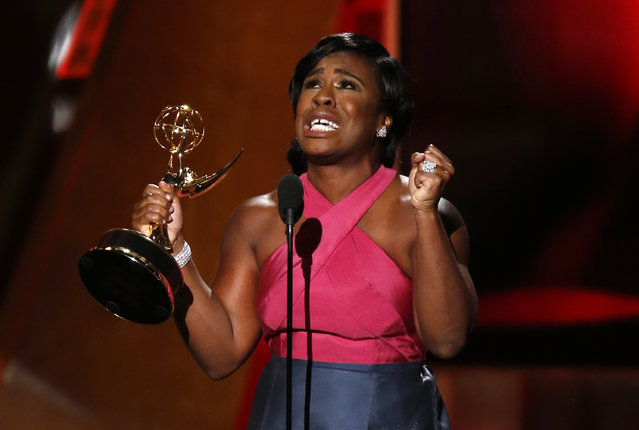 Uzo Aduba accepts the award for Outstanding Supporting Actress In A Drama Series for her role in Netflix's “Orange is the New Black” at the 67th Primetime Emmy Awards in Los Angeles, September 20, 2015. (Photo by Lucy Nicholson/Reuters) 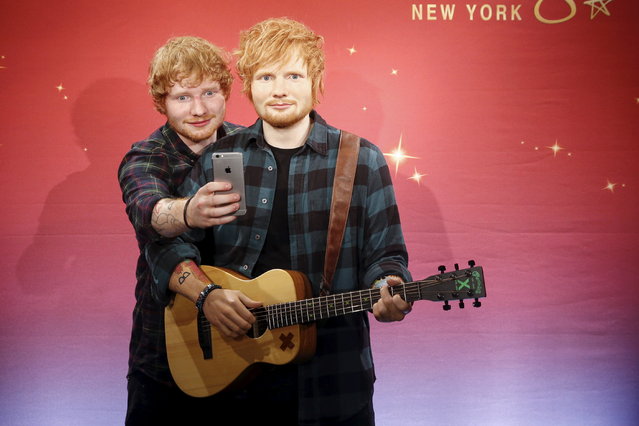 Ed Sheeran takes a “selfie” with his wax figure at Madame Tussauds museum in Manhattan, May 28, 2015. (Photo by Shannon Stapleton/Reuters) 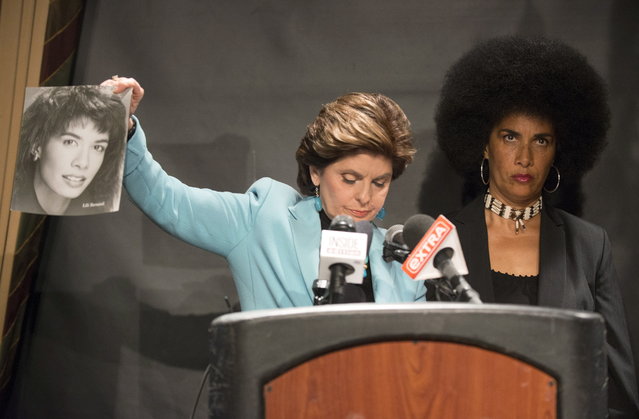 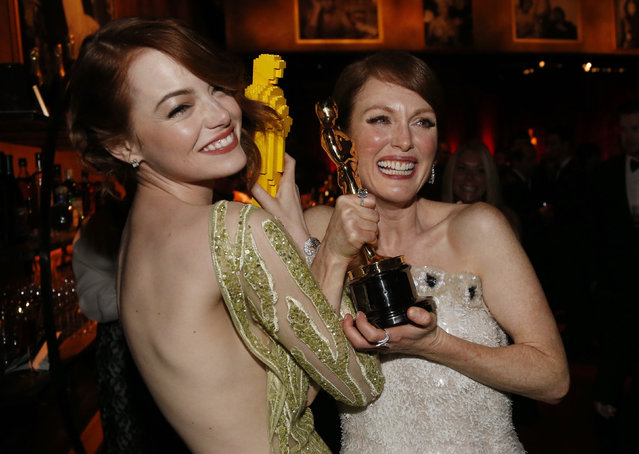 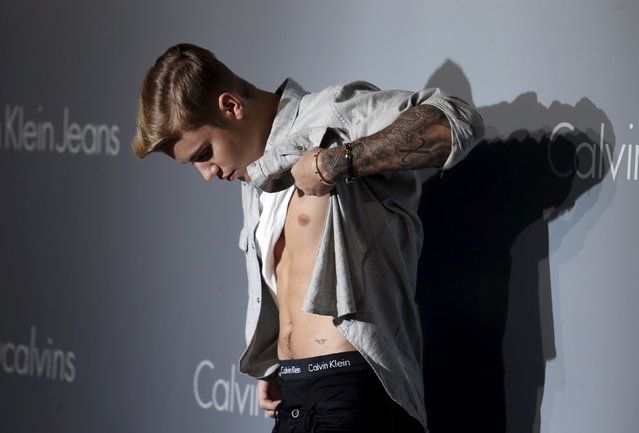 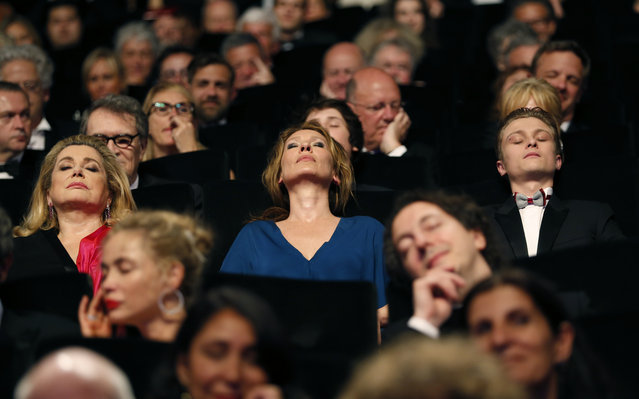 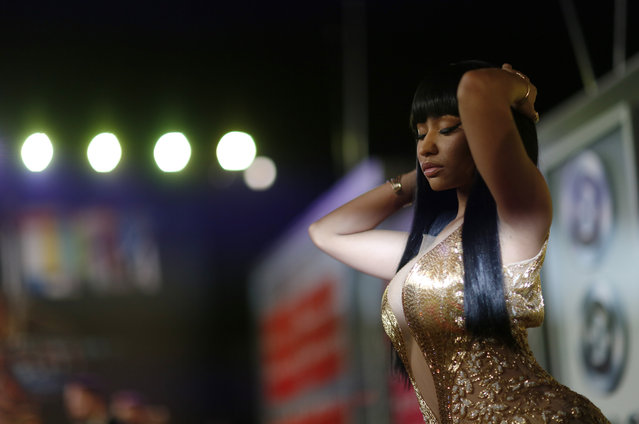 Nicki Minaj poses as she arrives at the 2015 MTV Video Music Awards in Los Angeles, August 30, 2015. (Photo by Mario Anzuoni/Reuters) 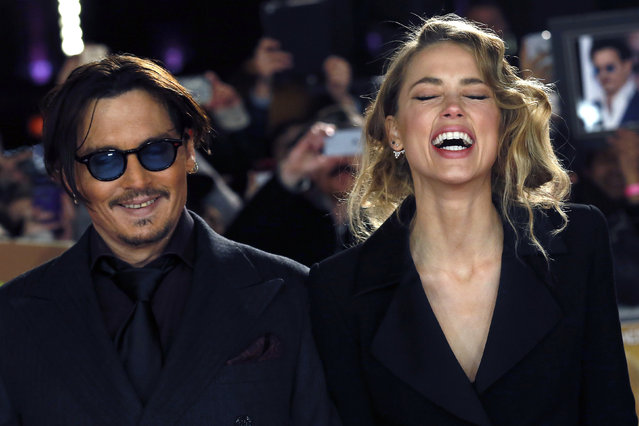 Johnny Depp and Amber Heard laugh as they arrive for the UK premiere of “Mortdecai” at Leicester Sqaure in London, January 19, 2015. (Photo by Luke MacGregor/Reuters) 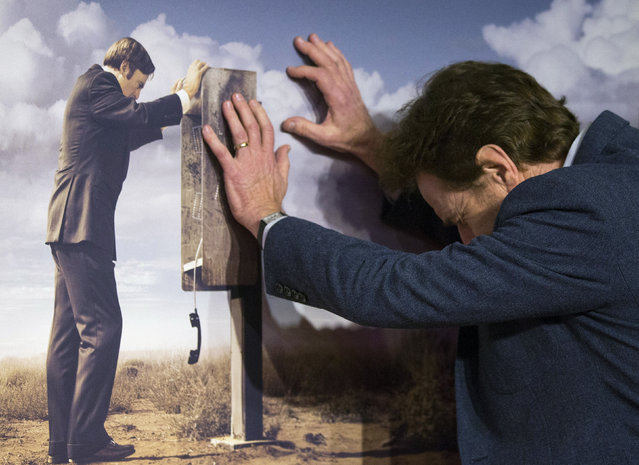 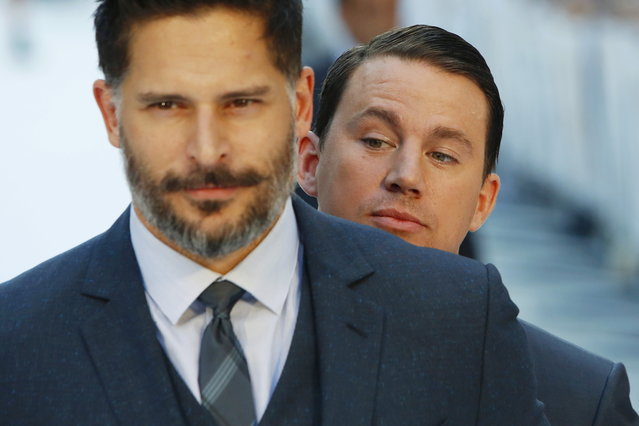 Channing Tatum photo-bombs Joe Manganiello as he poses at the European premiere of “Magic Mike XXL” at Leicester Square in London, June 30, 2015. (Photo by Luke MacGregor/Reuters) 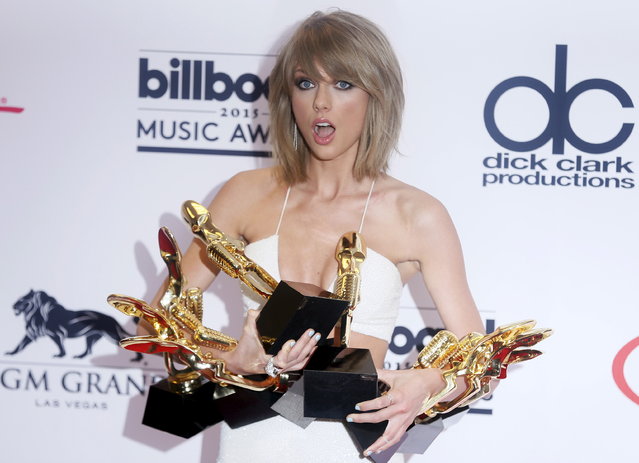 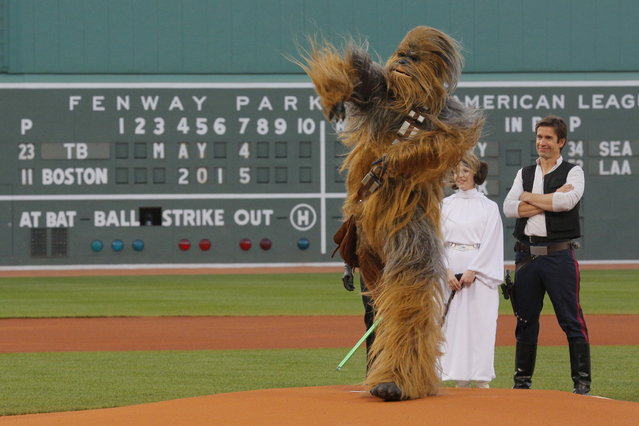 People dressed as Star Wars characters Chewbacca, Princess Leia and Han Solo throw out the ceremonial first pitch before the game between the Tampa Bay Rays and the Boston Red Sox at Fenway Park in Boston, May 4, 2015. (Photo by Brian Snyder/Reuters) 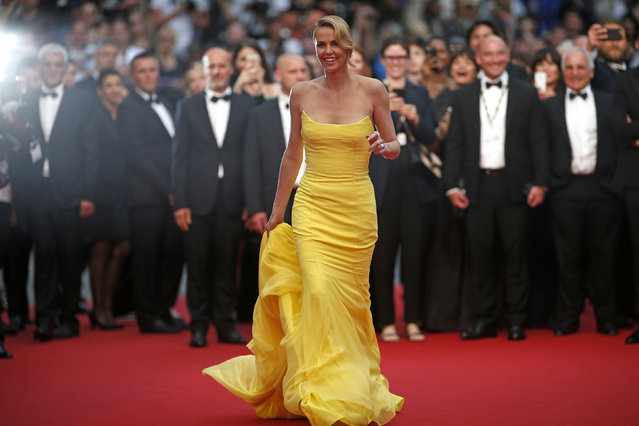 Charlize Theron poses on the red carpet as she arrives for the screening of the film “Mad Max: Fury Road” out of competition at the 68th Cannes Film Festival, May 14, 2015. (Photo by Benoit Tessier/Reuters) 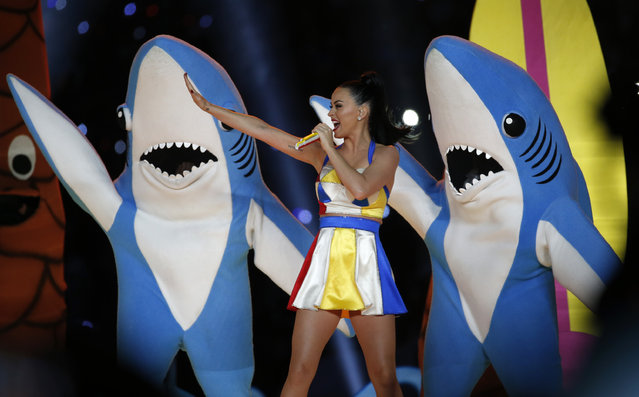 Katy Perry performs during the halftime show at the NFL Super Bowl XLIX football game between the Seattle Seahawks and the New England Patriots in Glendale, Arizona, February 1, 2015. (Photo by Lucy Nicholson/Reuters) 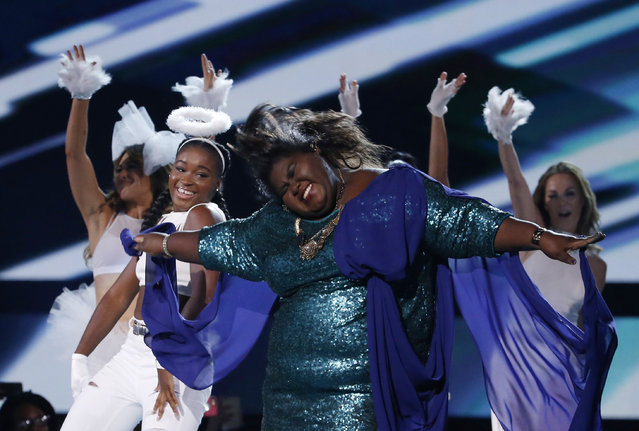 Gabourey Sidibe, from the television drama “Empire”, dances during a performance of “You're So Beautiful” at the 2015 Teen Choice Awards in Los Angeles, August 16, 2015. (Photo by Mario Anzuoni/Reuters) 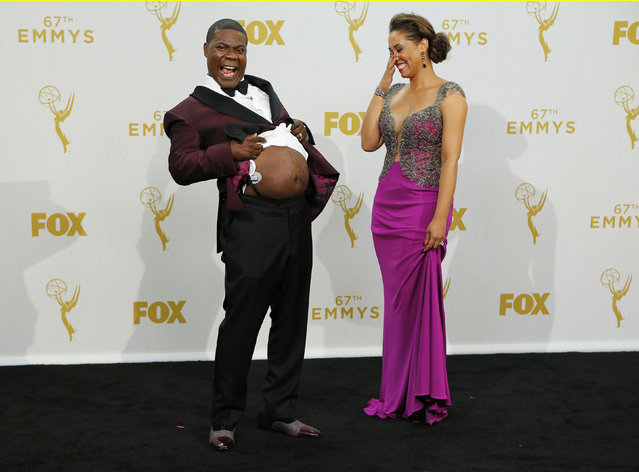 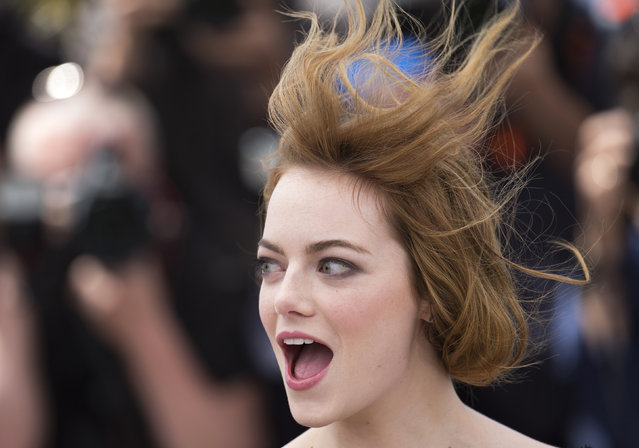 Emma Stone poses during a photocall for the film “Irrational Man” out of competition at the 68th Cannes Film Festival, May 15, 2015. (Photo by Yves Herman/Reuters) 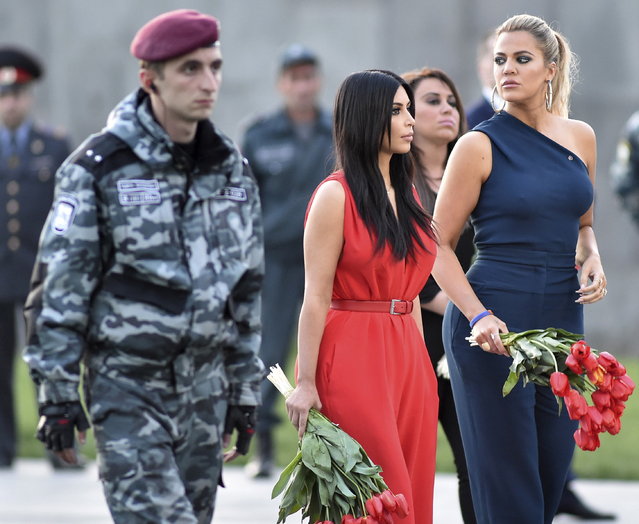 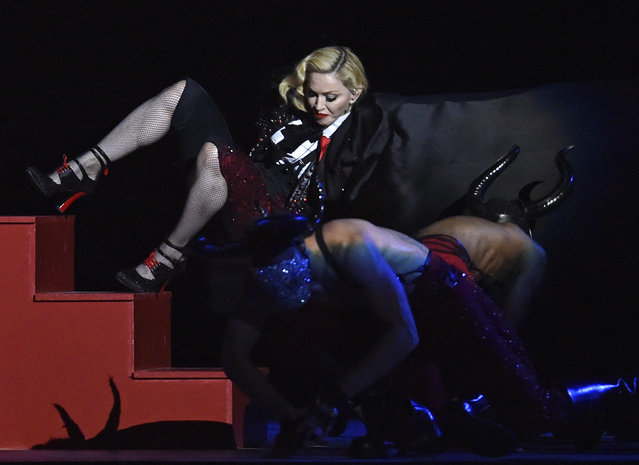 Madonna falls during her performance at the BRIT music awards at the O2 Arena in Greenwich, London, February 25, 2015. (Photo by Toby Melville/Reuters) 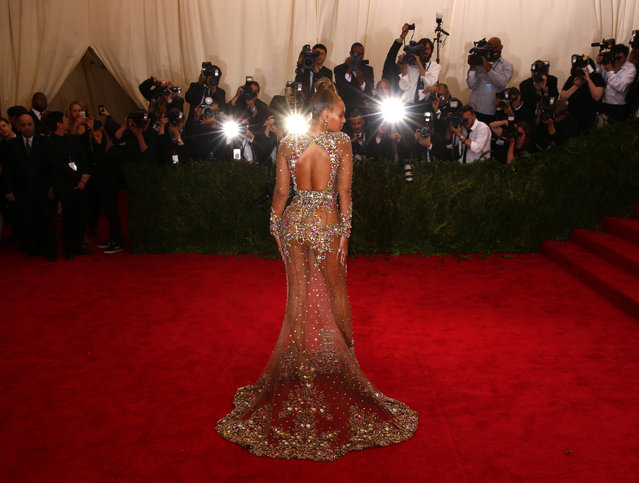 Beyonce arrives at the Metropolitan Museum of Art Costume Institute Gala 2015 celebrating the opening of “China: Through the Looking Glass” in Manhattan, May 4, 2015. (Photo by Lucas Jackson/Reuters) 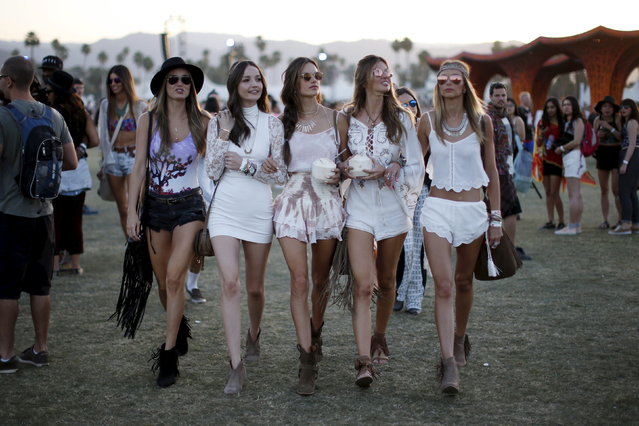 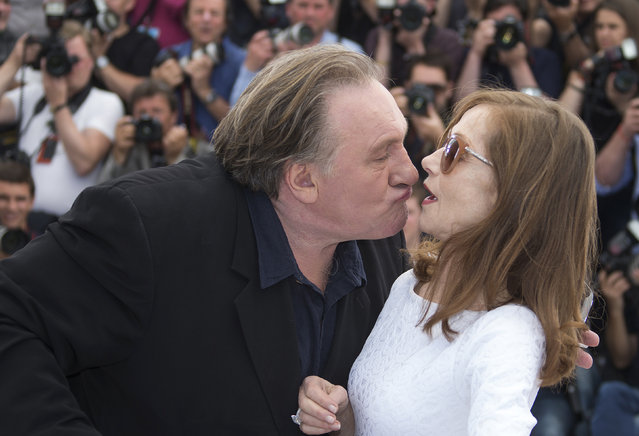 Gerard Depardieu tries to kiss cast member Isabelle Huppert as they pose during a photocall for the film “Valley of Love” in competition at the 68th Cannes Film Festival in Cannes, May 22, 2015. (Photo by Yves Herman/Reuters) 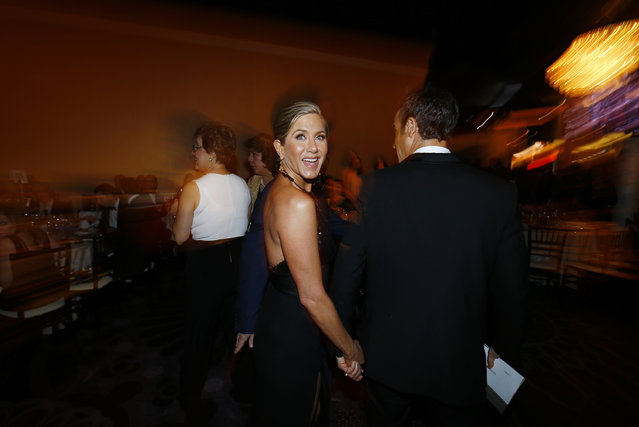