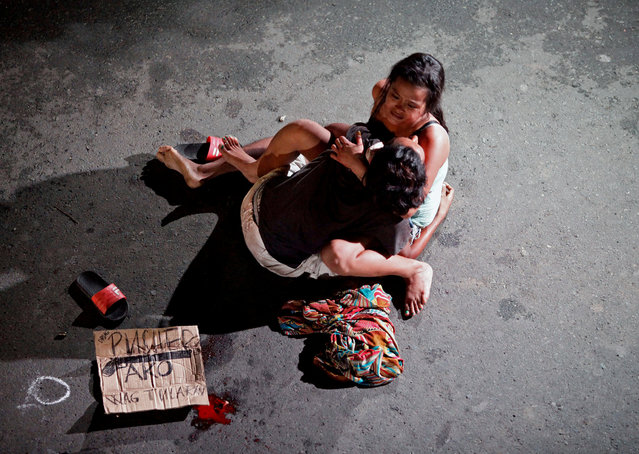 Jennilyn Olayres, 26, weeps over the body of her partner, who was killed on a street in Pasay city, Metro Manila, Philippines July 23, 2016. (Photo by Czar Dancel/Reuters) 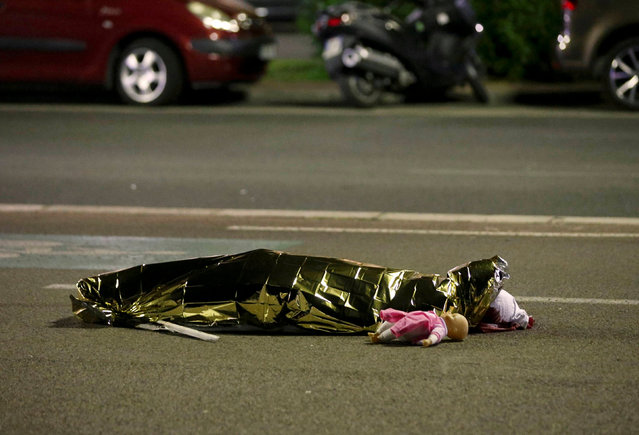 A body is seen on the ground in Nice, France July 15, 2016, after the Bastille Day truck attack on July 14. (Photo by Eric Gaillard/Reuters) 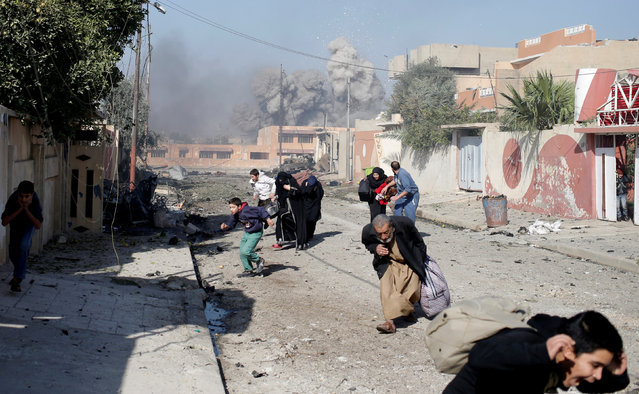 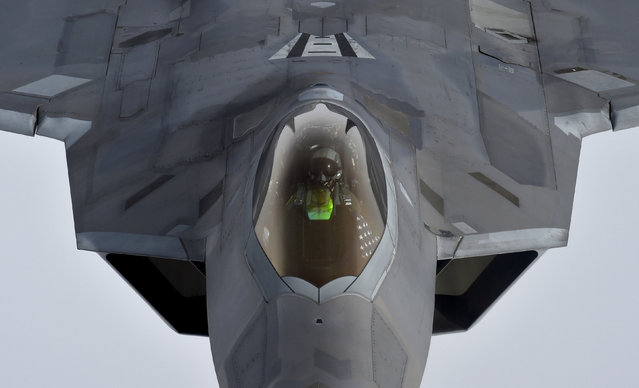 A pilot looks up from a U.S. F-22 Raptor fighter as it prepares to refuel mid-air with a KC-135 refuelling plane during a flight to Britain from Mihail Kogalniceanu air base in Romania, April 25, 2016. (Photo by Toby Melville/Reuters) 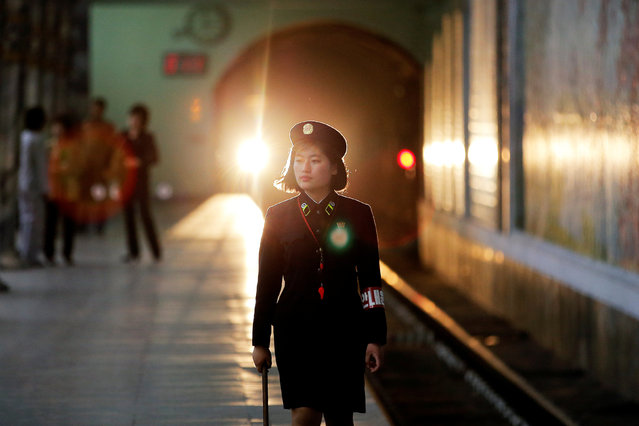 A subway worker walks away after a train departed the station in central Pyongyang, North Korea May 7, 2016. (Photo by Damir Sagolj/Reuters) 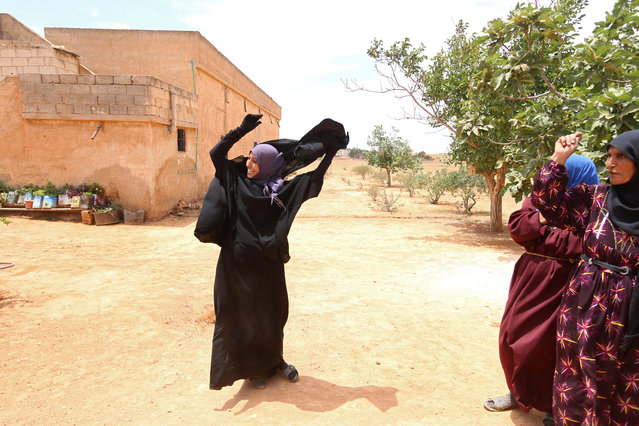 A woman removes a Niqab she was wearing in her village after Syria Democratic Forces (SDF) took control of it, on the outskirts of Manbij city, Aleppo province, Syria June 9, 2016. (Photo by Rodi Said/Reuters) 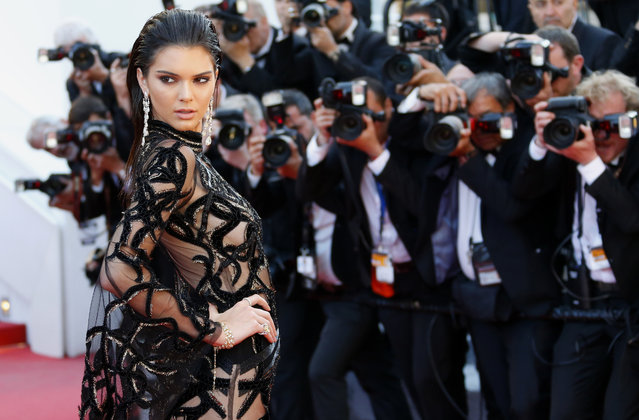 Model Kendall Jenner poses on the red carpet as she arrives for the screening of the film “Mal de pierres” (From the Land of the Moon) in competition at the 69th Cannes Film Festival in Cannes, France, May 15, 2016. (Photo by Yves Herman/Reuters) 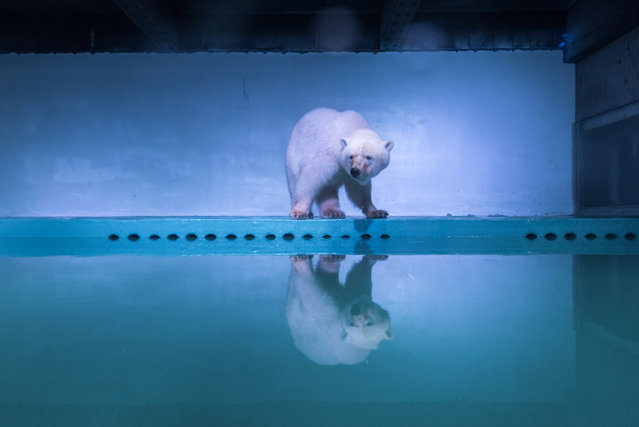 A polar bear is seen at an aquarium in Guangzhou, Guangdong province, China, July 27, 2016. (Photo by Reuters/Stringer) 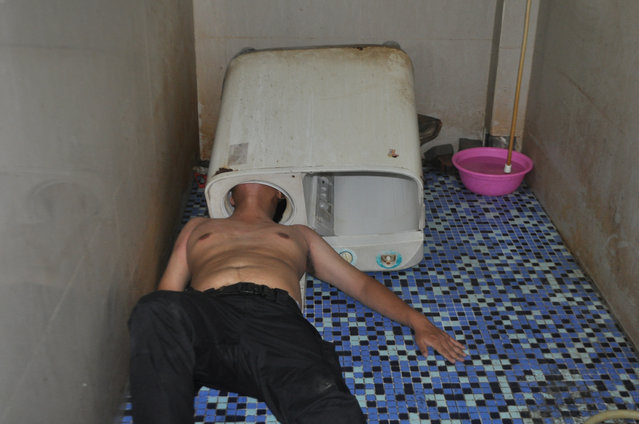 A man lies on the floor with his head stuck in a washing machine in Fuzhou, China May 29, 2016. According to local media, the man was trying to figure out why the machine was not working when his head became trapped. Firefighters eventually cut the machine and saved him. (Photo by Reuters/Stringer) 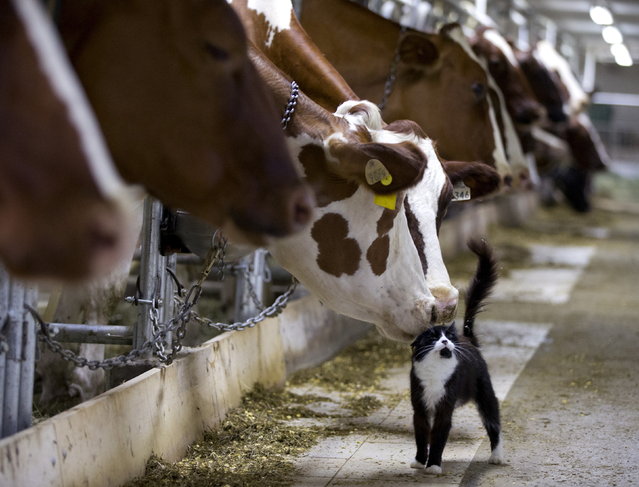 Dairy cows nuzzle a barn cat as they wait to be milked at a farm in Granby, Quebec July 26, 2016. (Photo by Christinne Muschi/Reuters) 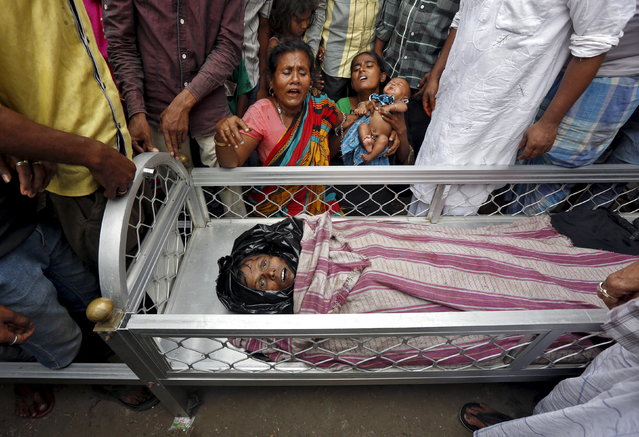 Women mourn next to the body of Mohammad Ramzani, a cycle rickshaw driver who died after an under-construction flyover collapsed on Thursday, in Kolkata, April 1, 2016. (Photo by Rupak De Chowdhuri/Reuters) 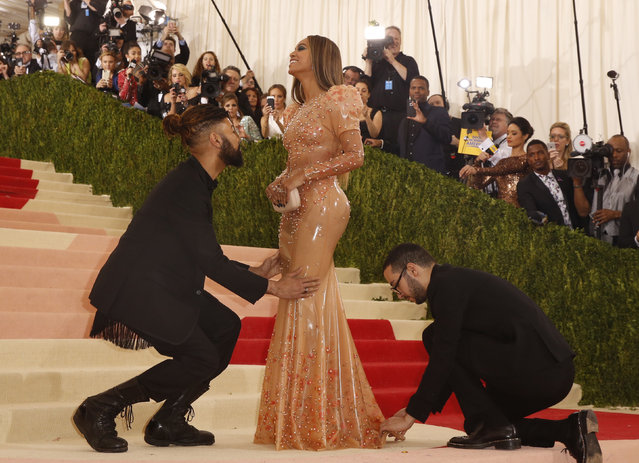 Singer-Songwriter Beyonce Knowles arrives at the Metropolitan Museum of Art Costume Institute Gala (Met Gala) to celebrate the opening of “Manus x Machina: Fashion in an Age of Technology” in the Manhattan borough of New York, May 2, 2016. (Photo by Lucas Jackson/Reuters) 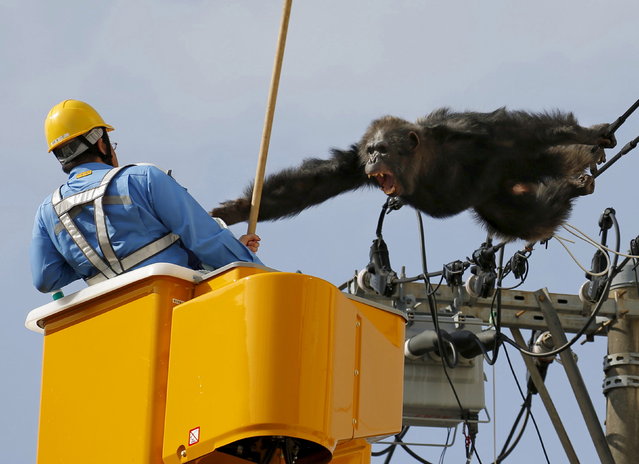 Male chimpanzee Chacha screams after escaping from nearby Yagiyama Zoological Park as a man tries to capture him on the power lines at a residential area in Sendai, northern Japan, April 14, 2016. The chimp was eventually caught after being shot with a tranquilizer gun and falling from the power lines, Kyodo news reported. (Photo by Reuters/Kyodo News) 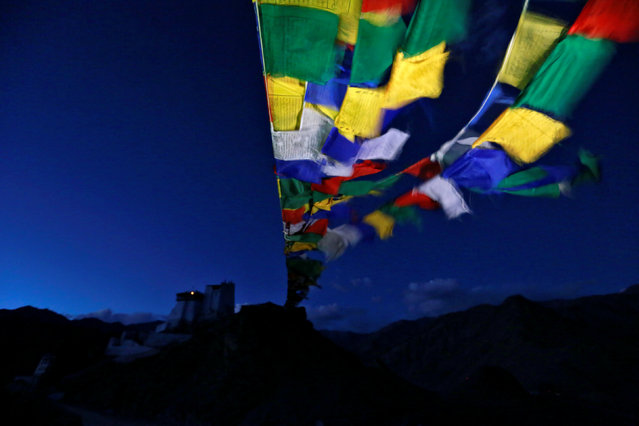 Prayer flags stretch towards Tsemo Monastery in the city of Leh, the largest town in the region of Ladakh, nestled high in the Indian Himalayas, September 26, 2016. (Photo by Cathal McNaughton/Reuters) 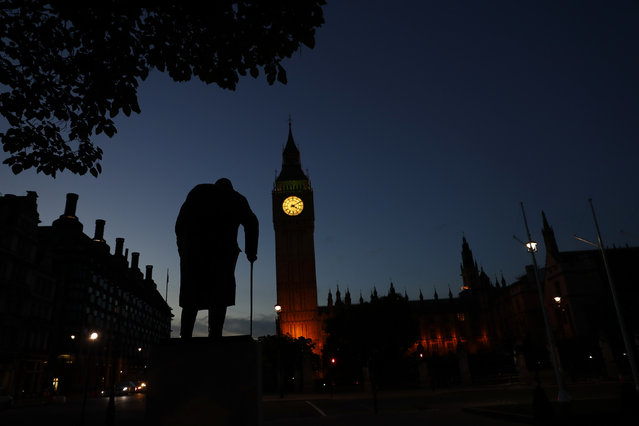 Dawn breaks behind the Houses of Parliament and the statue of Winston Churchill the day after the Brexit vote in Westminster, London June 24, 2016. (Photo by Stefan Wermuth/Reuters) 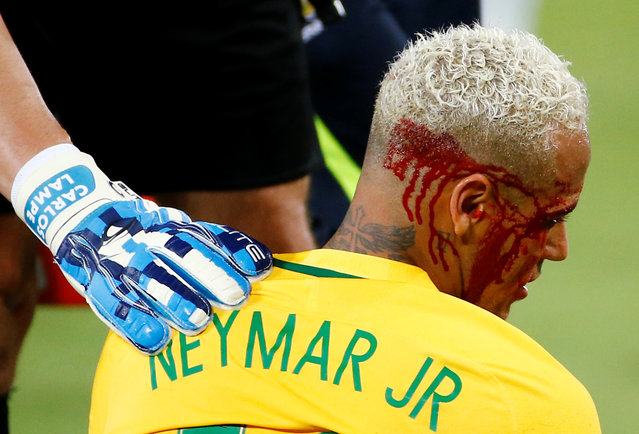 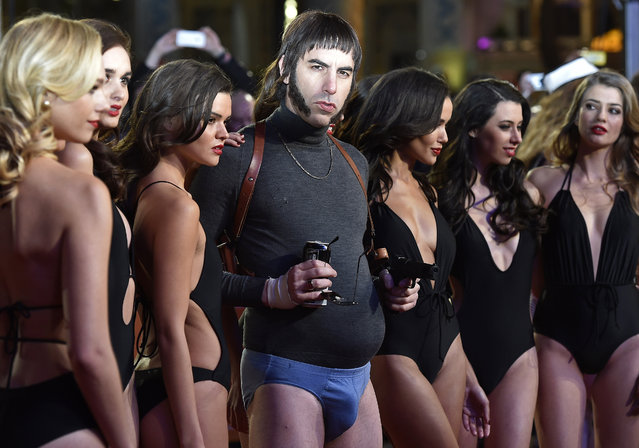 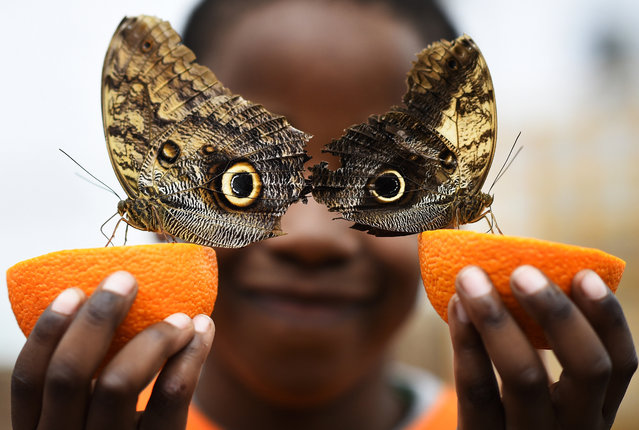 Bjorn, aged 5, smiles as he poses with a Owl butterfly during an event to launch the Sensational Butterflies exhibition at the Natural History Museum in London, Britain. (Photo by Dylan Martinez/Reuters) 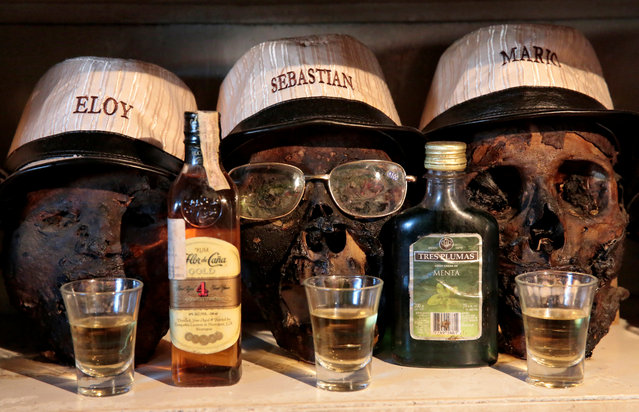 Skulls are seen at the witch doctor kiosk during the day of offerings to the “Pachamama” (Mother Earth) in El Alto, Bolivia, August 1, 2016. (Photo by David Mercado/Reuters) 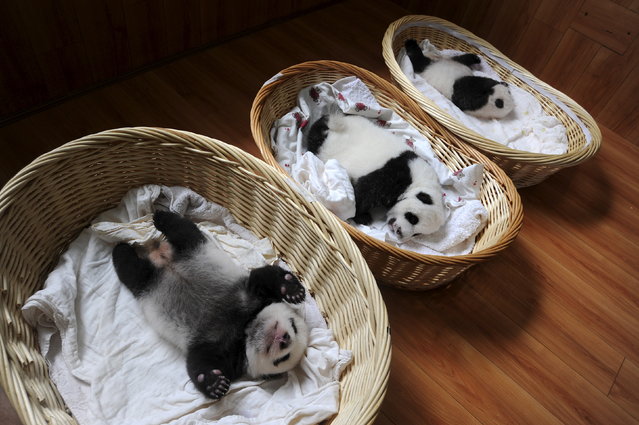 Giant panda cubs are seen inside baskets during their debut appearance to visitors at a giant panda breeding centre in Ya'an, Sichuan province, China, August 21, 2015. A total of 10 giant panda cubs that were born in the center this year, aging from one week to two months, met visitors for the first time, local media reported. (Photo by Reuters/Stringer) 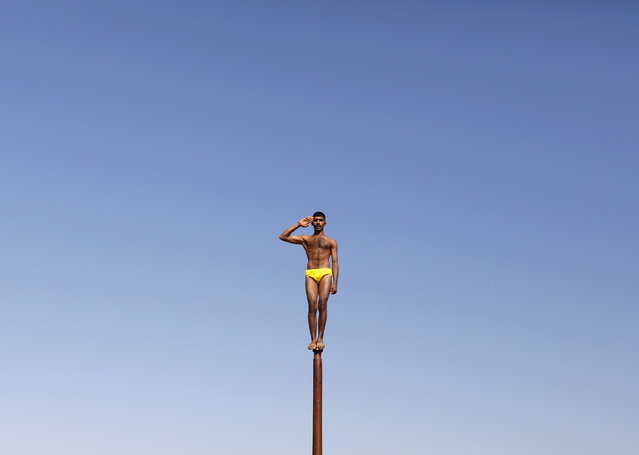 An Indian army soldier performs “Malkhamb” (traditional Indian gymnastics) during an awareness programme to attract youth in joining the armed forces on the eve of Republic Day at Gandhinagar, in the western state of Gujarat, January 25, 2016. (Photo by Amit Dave/Reuters) 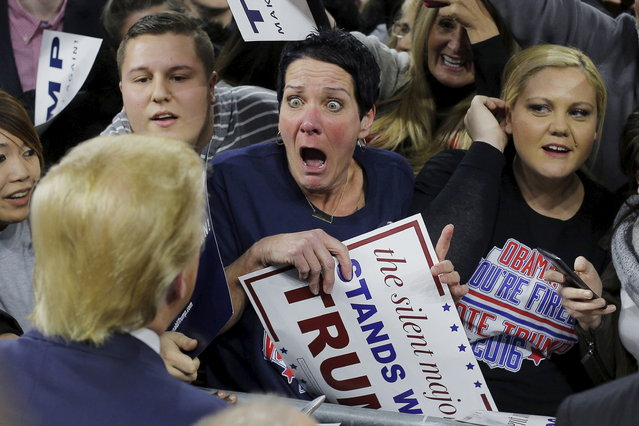 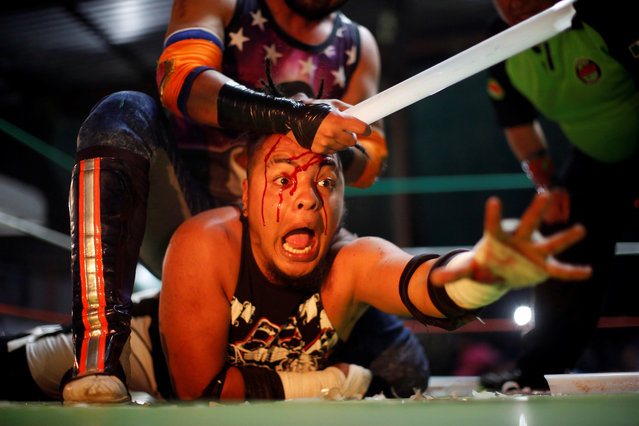 Wrestler known as Gio Malkriado (top) fights with a fluorescent tube with wrestler Ciclope during an extreme wrestling fight at a temporary wrestling ring inside a car wash in Tulancingo Hidalgo, Mexico October 8, 2016. (Photo by Carlos Jasso/Reuters) 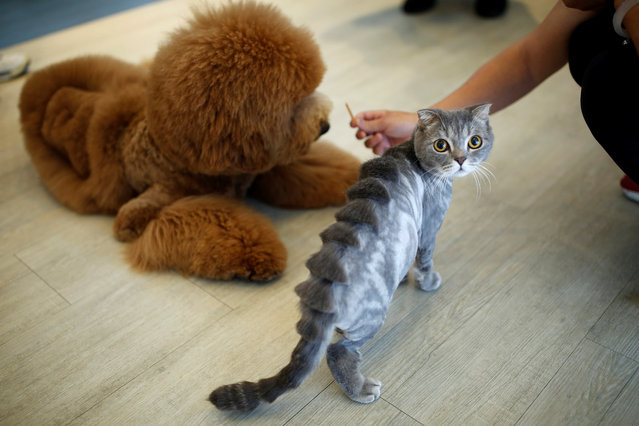 A cat with a “stegosaurus spine” design cut into its fur is seen next to a dog at a pet shop, in Tainan, Taiwan. (Photo by Tyrone Siu/Reuters) 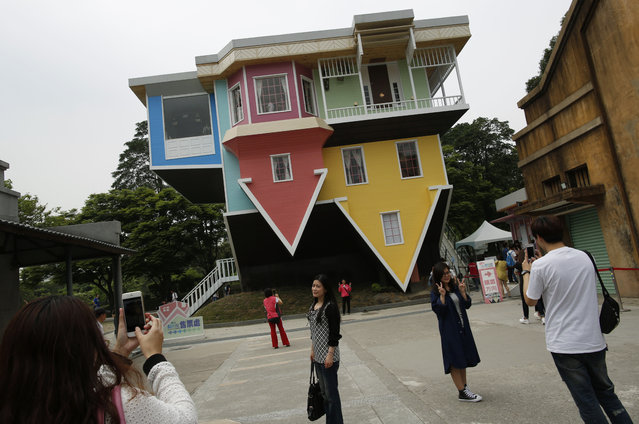 Visitors pose in front of a three story upside-down family sized house at the Huashan Creative Park in Taipei, Taiwan. Over 300 square meters of floor space of the upside-down house, filled with home furnishings, was created by a group of Taiwanese architects at a total cost of around US$600,000 and took 2 months to complete, according to the organisers. (Photo by Tyrone Siu/Reuters) 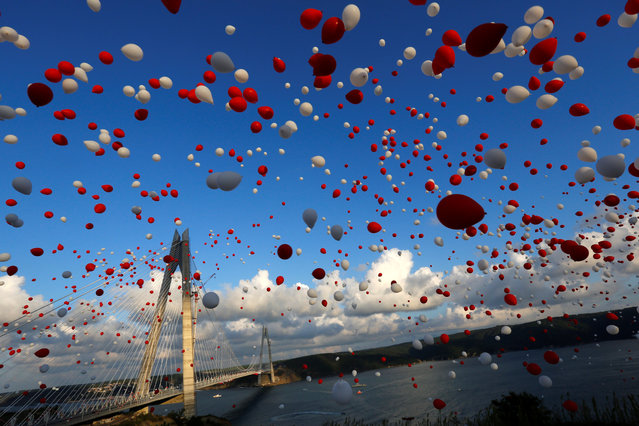 Red and white balloons are released during the opening ceremony of newly built Yavuz Sultan Selim bridge, the third bridge over the Bosphorus linking the city's European and Asian sides in Istanbul, Turkey, August 26, 2016. (Photo by Murad Sezer/Reuters) 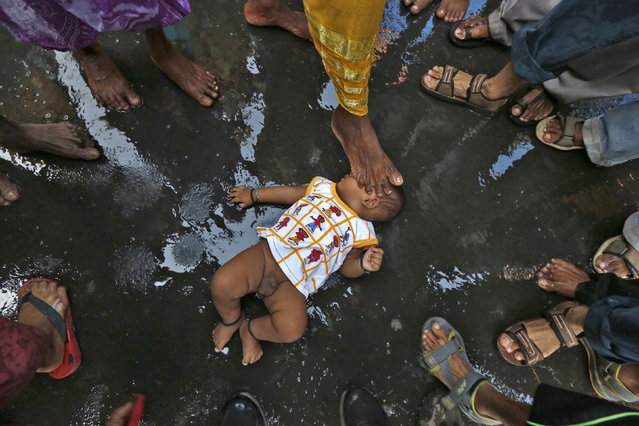 A Hindu holy man (not pictured) touches an infant with his foot as part of a ritual to bless him during a religious procession to mark the Gajan festival in Kolkata, April 12, 2016. (Photo by Rupak De Chowdhuri/Reuters)
Edit Del
15 Dec 2016 08:40:00, post received 0 comments
Publication archive:
←   →
Popular tags:
All tags
Last searches: