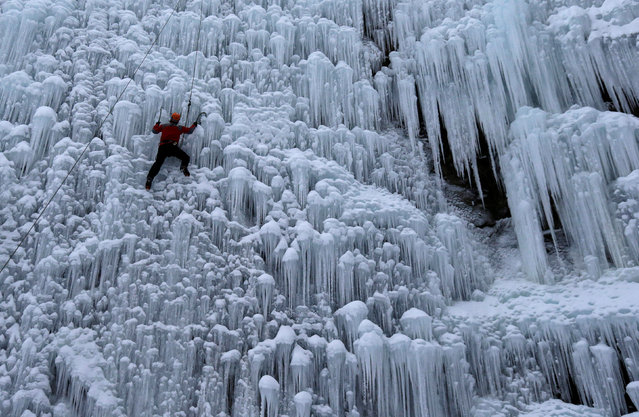 A man climbs a wall of ice in the city of Liberec, Czech Republic, January 12, 2017. (Photo by David W. Cerny/Reuters) Emissions from a power plant chimney rise over Ulaanbaatar, Mongolia, January 13, 2017. (Photo by B. Rentsendorj/Reuters) 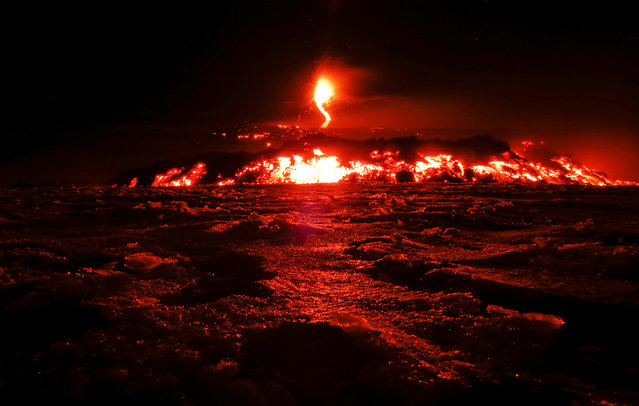 Italy's Mount Etna, Europe's tallest and most active volcano, spews lava as it erupts on the southern island of Sicily, Italy, February 28, 2017. (Photo by Antonio Parrinello/Reuters) 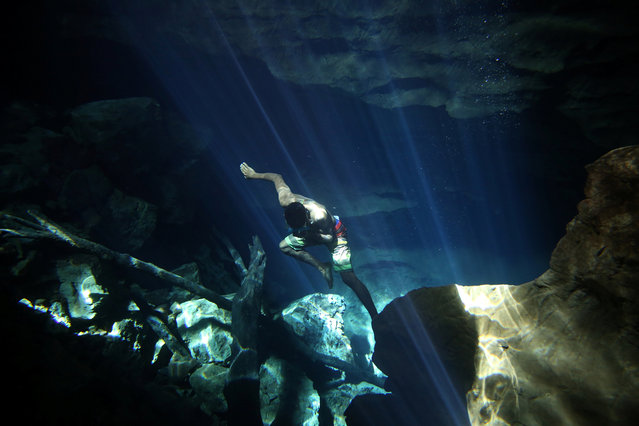 A worker of the cavern of Poco Azul (Blue Well) dives to search for belongings dropped by tourists, ahead of World Water Day, in Bahia, Brazil, March 21, 2017. (Photo by Pilar Olivares/Reuters) 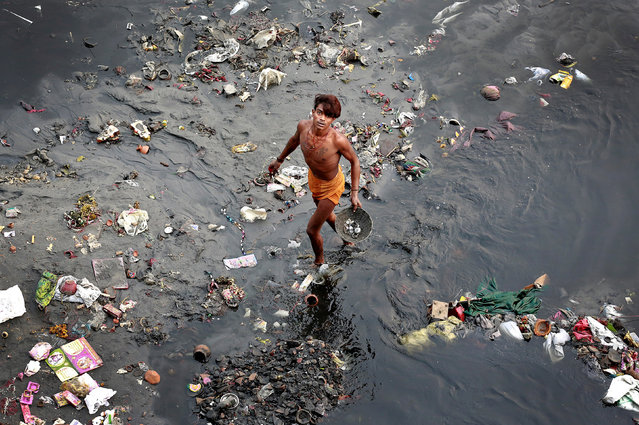 A man sifts through rubbish in the Yamuna river in Delhi, India, October 31, 2017. (Photo by Cathal McNaughton/Reuters) 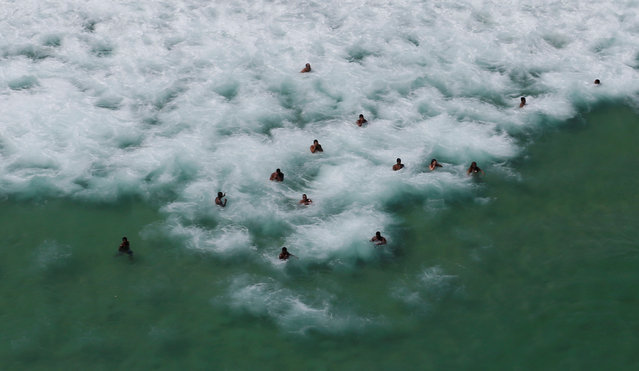 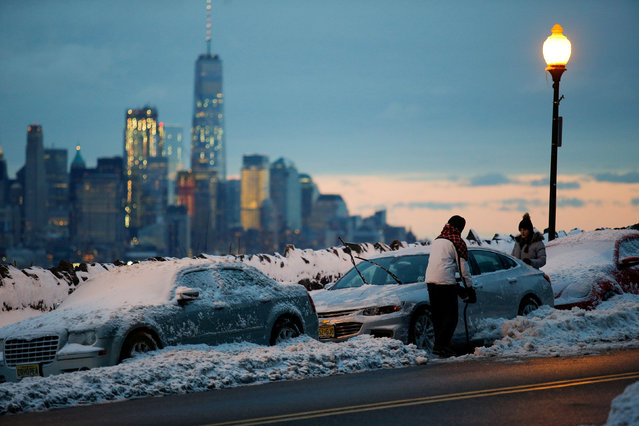 Residents clear their cars and street of snow in Weehawken, New Jersey, as the One World Trade Center and lower Manhattan are seen after a snowstorm in New York, March 14, 2017. (Photo by Eduardo Munoz/Reuters) 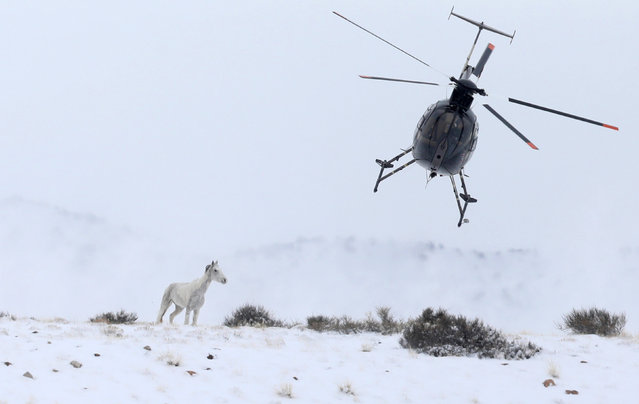 A wild horse is herded into corrals by a helicopter during a Bureau of Land Management round-up outside Milford, Utah, January 7, 2017. (Photo by Jim Urquhart/Reuters) 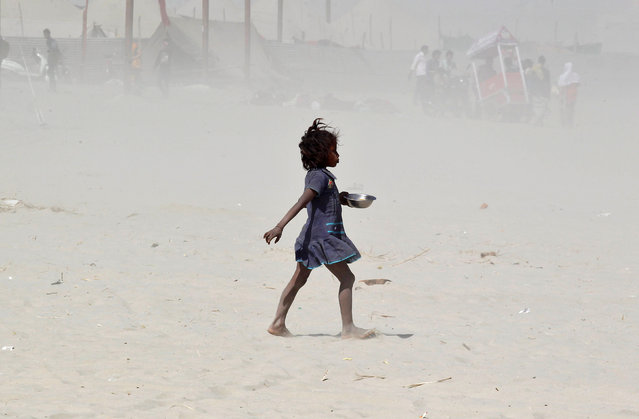 A girl walks amidst a dust storm on the banks of the Ganges river in Allahabad, India, February 24, 2017. (Photo by Jitendra Prakash/Reuters) 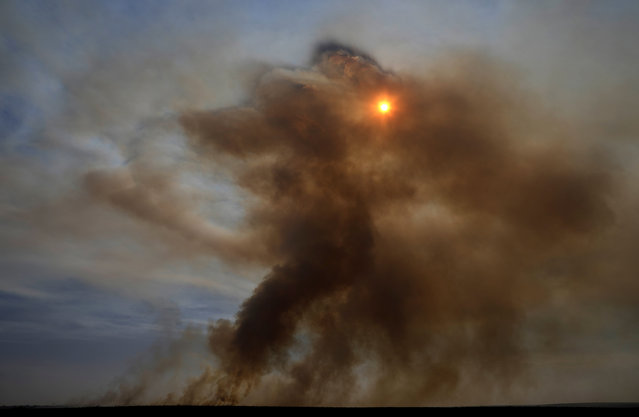 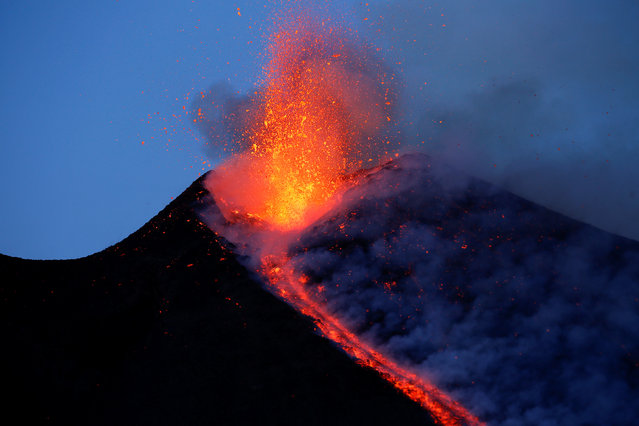 Italy's Mount Etna, Europe's tallest and most active volcano, spews lava as it erupts on the southern island of Sicily, Italy February 28, 2017. (Photo by Antonio Parrinello/Reuters) 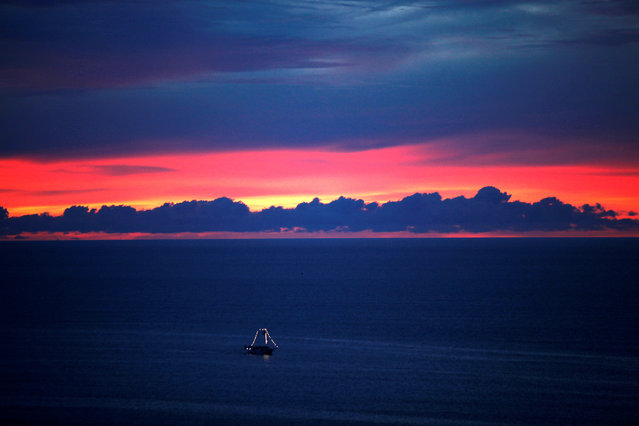 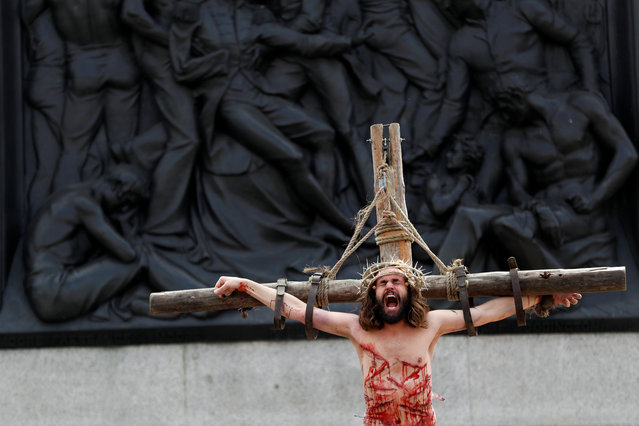 Actor James Burke-Dunsmore playing Jesus while performing in The Passion of Jesus at Trafalgar Square in London, April 14, 2017. (Photo by Stefan Wermuth/Reuters) 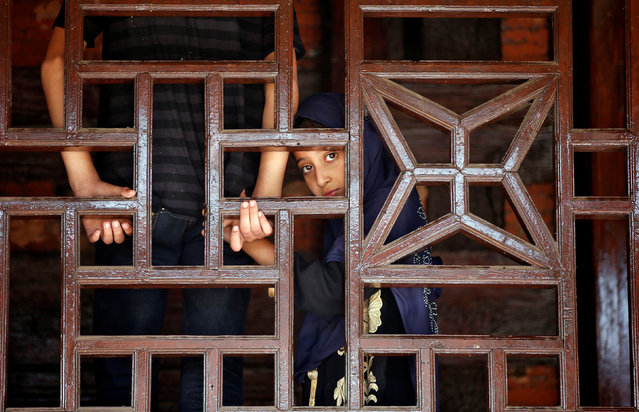 A Muslim girl looks on behind a wooden window frame at the shrine of Mir Syed Ali Hamdani, a Sufi saint, during an annual religious festival in Srinagar, August 29, 2017. (Photo by Danish Ismail/Reuters) 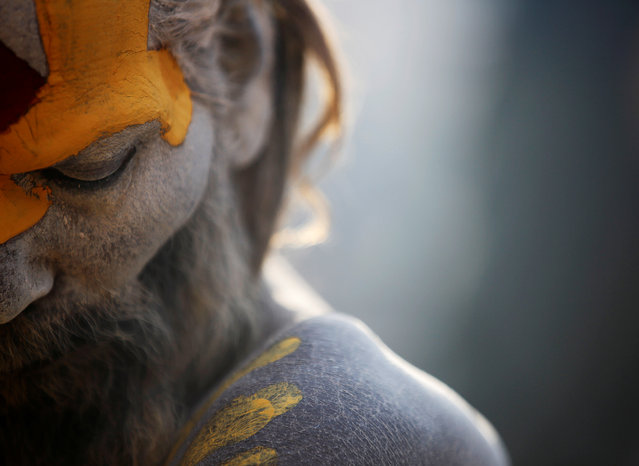 A Hindu holy man, or sadhu, smeared with ashes is pictured as he sits at the premises of Pashupatinath Temple during the Shivaratri festival in Kathmandu, Nepal, February 24, 2017. (Photo by Navesh Chitrakar/Reuters) 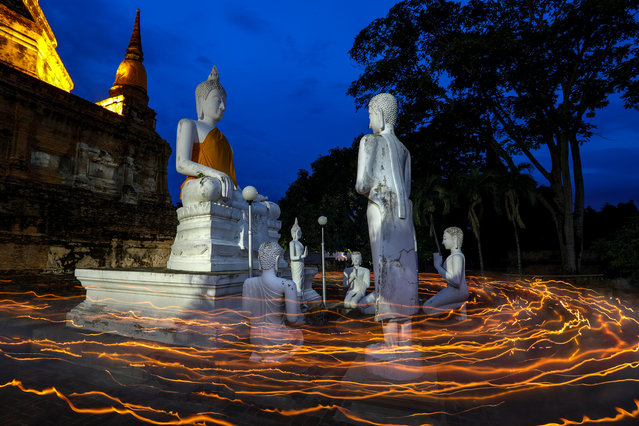 Buddhists carry candles as they pray during Vesak Day, an annual celebration of Buddha's birth, enlightenment and death, at Wat Yai Chai Mongkhon temple in Ayutthaya, Thailand, May 10, 2017. (Photo by Athit Perawongmetha/Reuters) 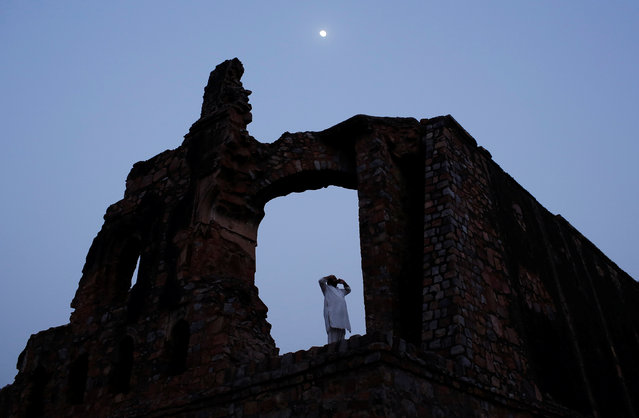 A Muslim man calls for the evening prayer after having his iftar (breaking of fast) meal during the holy month of Ramadan at the ruins of the Feroz Shah Kotla mosque in New Delhi, India, June 5, 2017. (Photo by Adnan Abidi/Reuters) 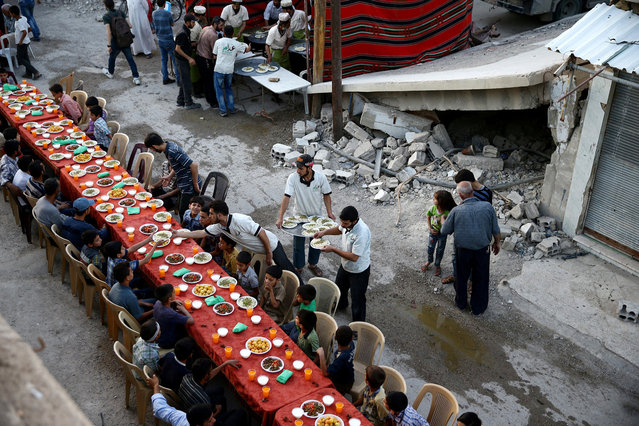 People gather for Iftar (breaking fast), organised by Adaleh Foundation, amidst damaged buildings during the holy month of Ramadan in the rebel-held besieged town of Douma to the east of Damascus, Syria, June 18, 2017. (Photo by Bassam Khabieh/Reuters) 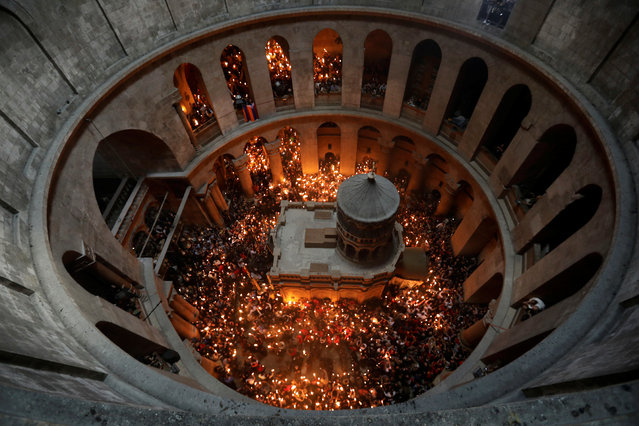 Worshippers hold candles as they take part in the Christian Orthodox Holy Fire ceremony at the Church of the Holy Sepulchre in Jerusalem's Old City, April 15, 2017. (Photo by Ammar Awad/Reuters) 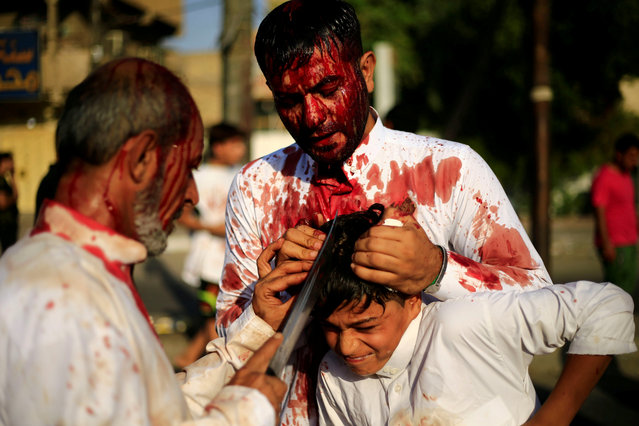 Iraqi Shi'ite Muslims gash the forehead of a boy with a sword during the religious festival of Ashura in Baghdad, Iraq, October 1, 2017. (Photo by Thaier Al-Sudani/Reuters) 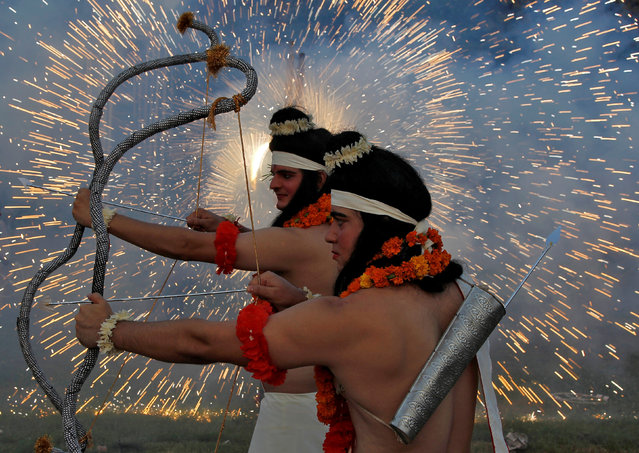 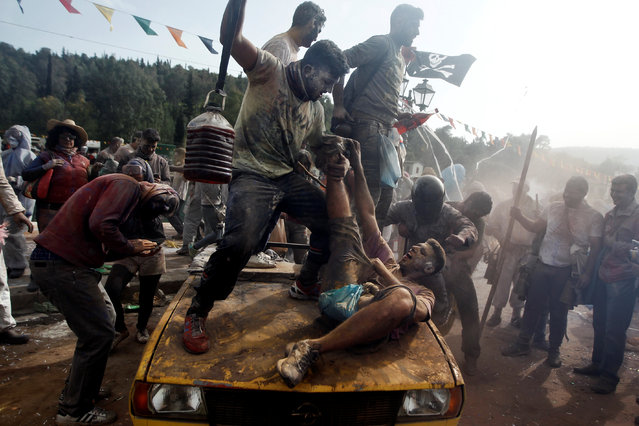 Revellers celebrate “Ash Monday” by participating in a colourful “flour war”, a traditional festivity marking the end of the carnival season and the start of the 40-day Lent period until the Orthodox Easter,in the port town of Galaxidi, Greece, February 27, 2017. (Photo by Alkis Konstantinidis/Reuters) 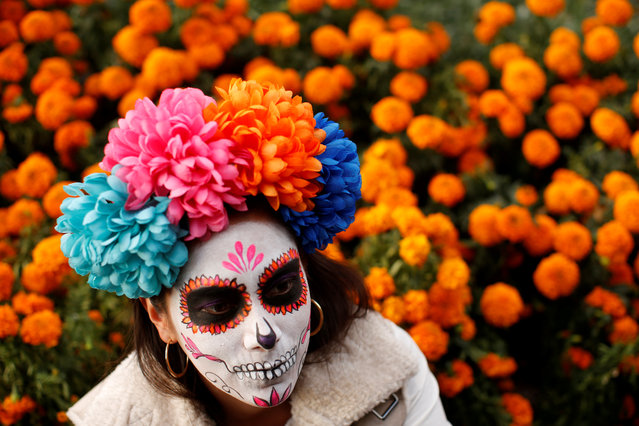 A woman dressed up as “Catrina”, a Mexican character also known as “The Elegant Death”, takes part in a Catrinas parade in Mexico City, Mexico, October 22, 2017. (Photo by Carlos Jasso/Reuters) 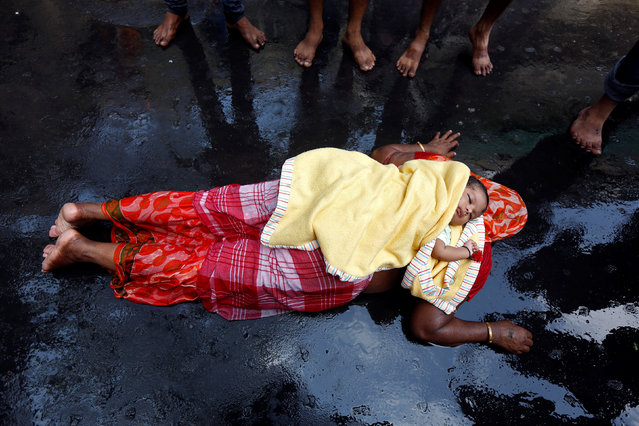 An infant lies on the back of a woman as she performs a ritual while worshipping Sheetala Mata, the Hindu goddess of smallpox, during Sheetala Puja in which people pray for the betterment of their family and society, in Kolkata, April 15, 2017. (Photo by Rupak De Chowdhuri/Reuters) 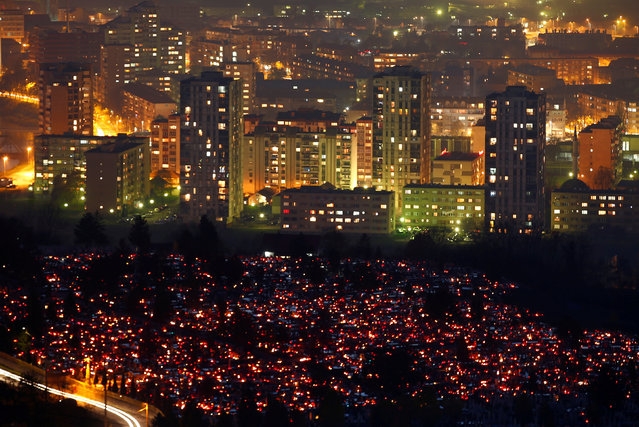