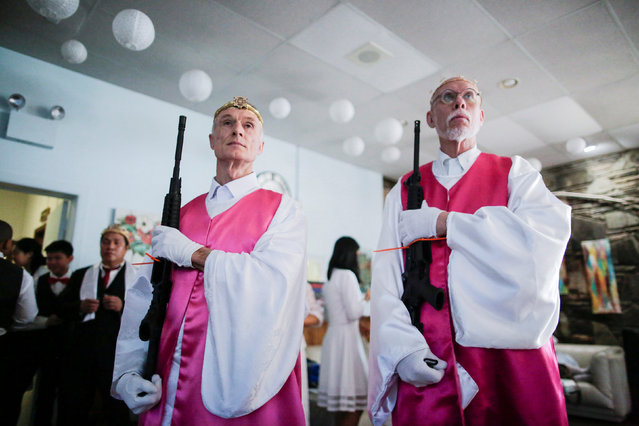 People attend a blessing ceremony with their AR-15-style rifles at the Sanctuary Church in Newfoundland, Pennsylvania, February 28, 2018. (Photo by Eduardo Munoz/Reuters) 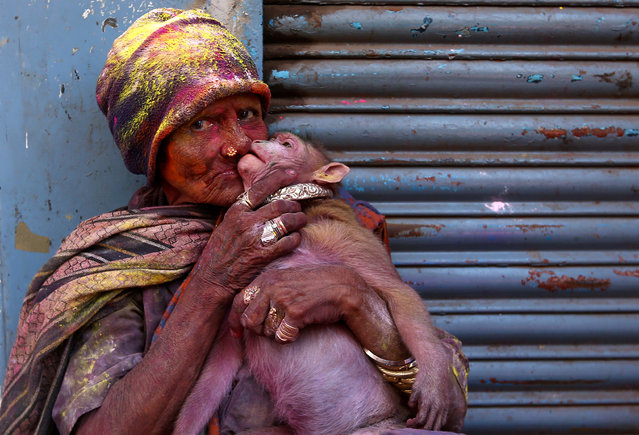 A woman daubed in colours kisses her monkey during Holi celebrations in Chennai, India, March 2, 2018. (Photo by P. Ravikumar/Reuters) 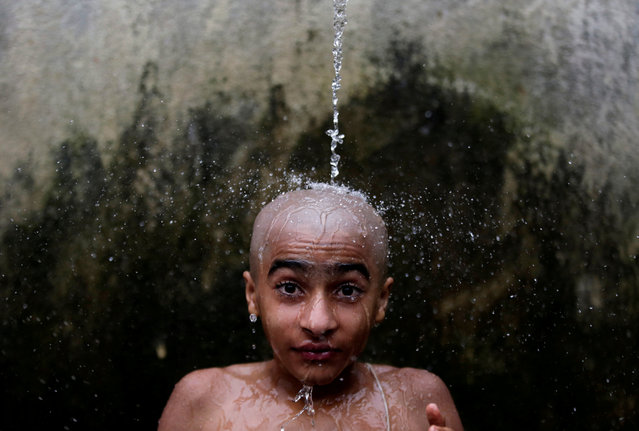 A young Hindu priest takes a holy bath as part of a ritual during the Janai Purnima, or Sacred Thread, festival at the Pashupatinath temple in Kathmandu, Nepal, August 26, 2018. (Photo by Navesh Chitrakar/Reuters) 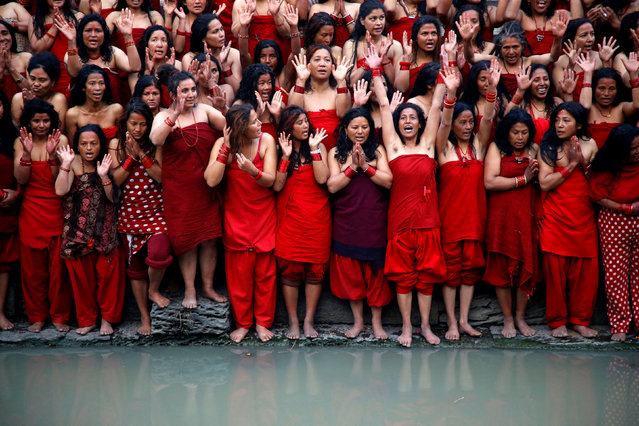 Devotees offer prayers before taking a holy bath in the Bagmati River at Pashupatinath Temple during the Swasthani Brata Katha festival in Kathmandu, Nepal, January 16, 2018. (Photo by Navesh Chitrakar/Reuters) 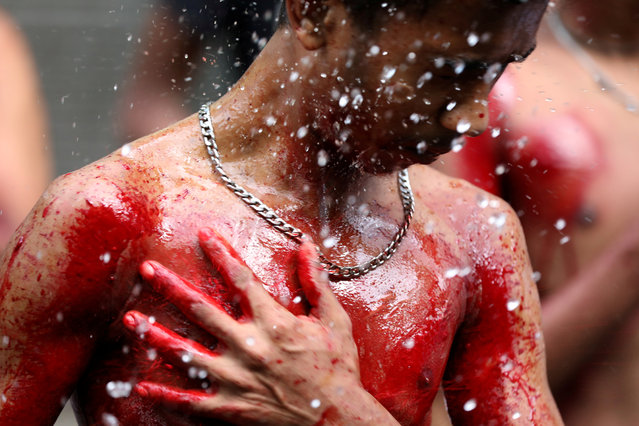 A Shi'ite muslim man bleeds after cutting himself while he takes part at the Ashura festival at a mosque in central Yangon, Myanmar, September 21, 2018. (Photo by Ann Wang/Reuters) 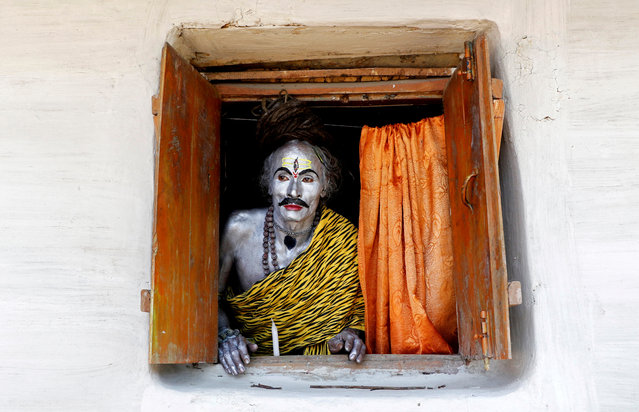 A devotee, dressed as Hindu God Shiva, looks out from a window as he waits to perform during the annual Shiva Gajan religious festival on the outskirts of Agartala, India, April 13, 2018. (Photo by Jayanta Dey/Reuters) 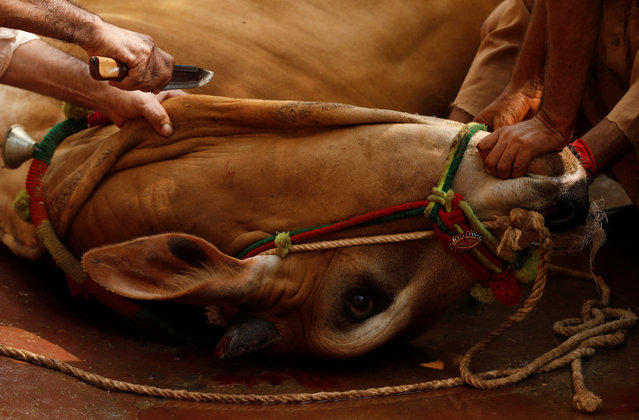 A man controls a cow to slaughter in celebration of Eid al-Adha, in Rawalpindi, Pakistan, August 22, 2018. (Photo by Faisal Mahmood/Reuters) 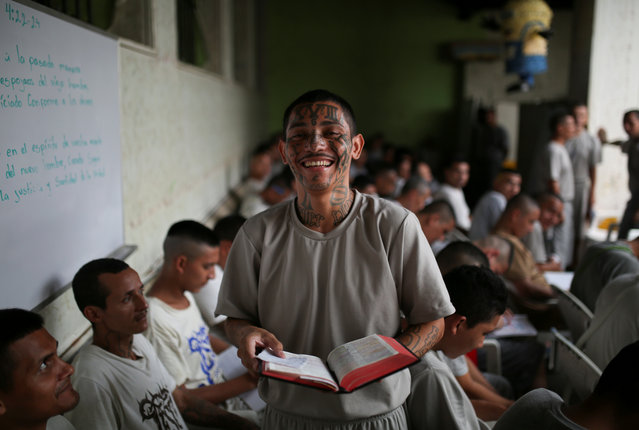 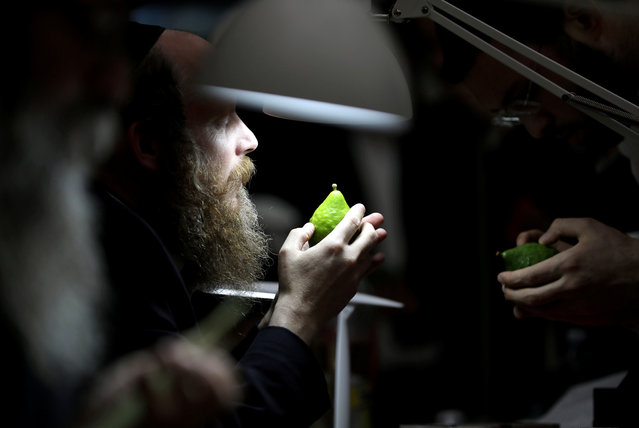 An ultra-Orthodox Jewish man checks an etrog, a citrus fruit used in rituals during the Jewish holiday of Sukkot, at a market in Jerusalem's Mea Shearim neighborhood, Jerusalem, September 20, 2018. (Photo by Ammar Awad/Reuters) 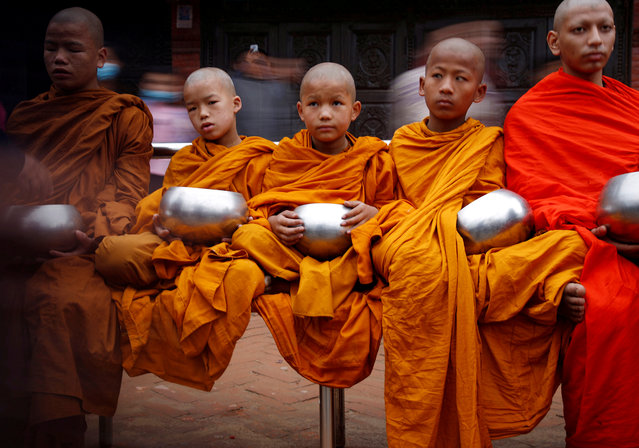 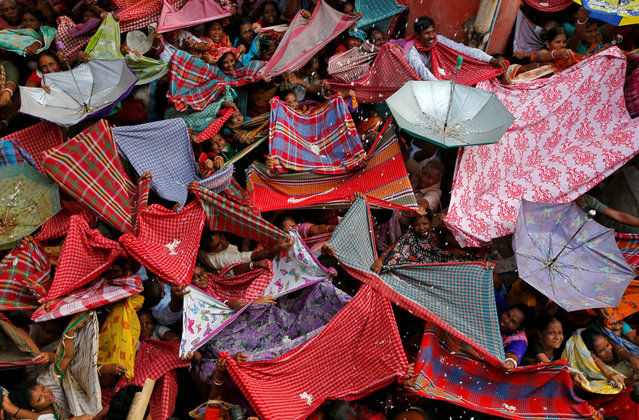 Hindu devotees hold up clothes and umbrellas to receive rice as offerings being distributed by a temple authority on the occasion of the Annakut festival in Kolkata, India, November 8, 2018. (Photo by Rupak De Chowdhuri/Reuters) 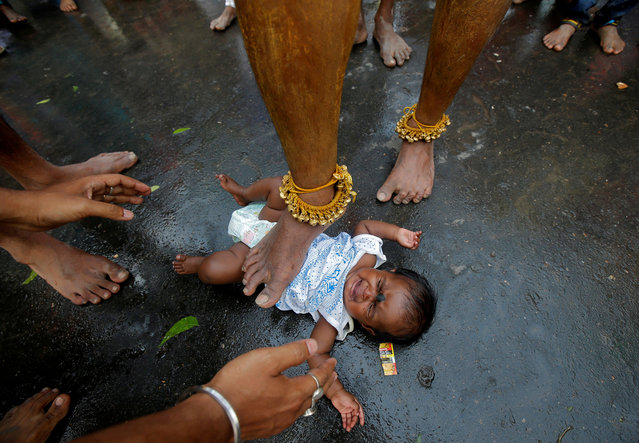 A Hindu holy man touches an infant with his foot as part of a ritual to bless her during a religious procession to mark Bhel Bhel festival dedicated to the Hindu goddess Muthumariamman in Bandel town in the eastern state of West Bengal, India, April 6, 2018. (Photo by Rupak De Chowdhuri/Reuters) 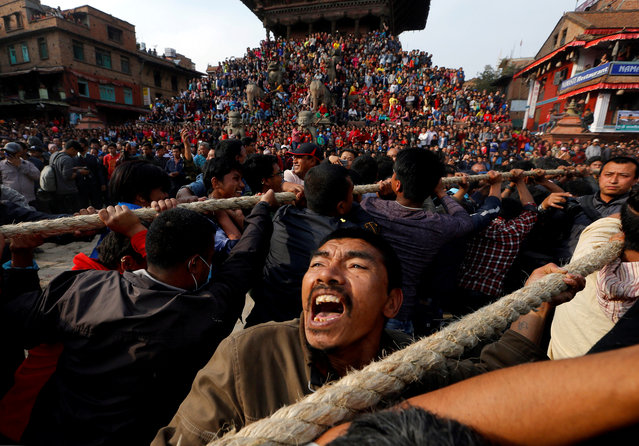 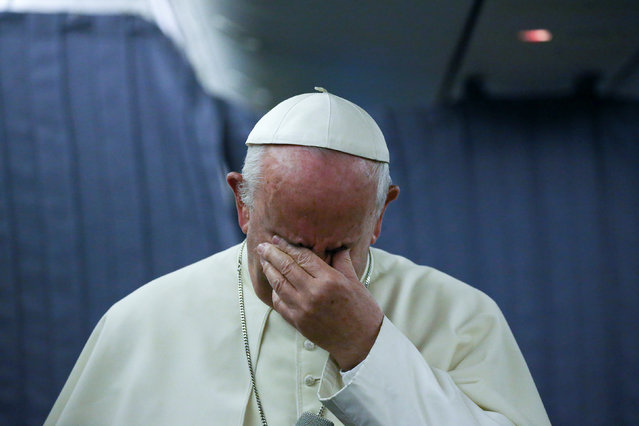 Pope Francis gestures during a news conference on board of the plane during his flight back from a trip to Chile and Peru, January 22, 2018. (Photo by Alessandro Bianchi/Reuters) 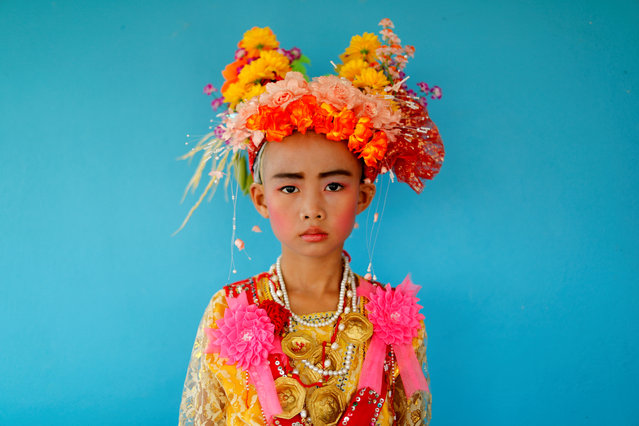 Danusorn Sdisaithaworn, 10, poses for a portrait during an annual Poy Sang Long celebration, a traditional rite of passage for boys to be initiated as Buddhist novices, while he visits a relative's house outside Mae Hong Son, Thailand, April 4, 2018. (Photo by Jorge Silva/Reuters) 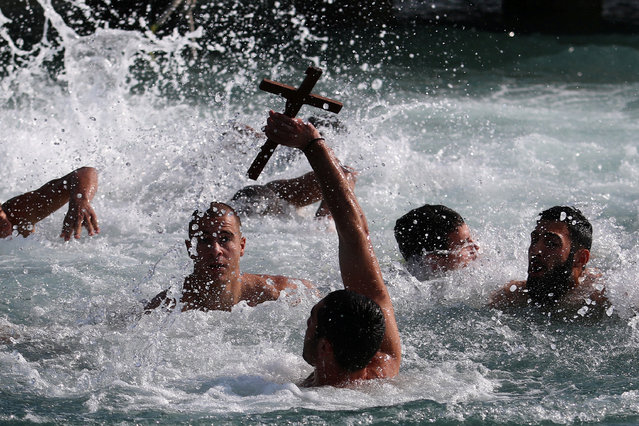 A man holds a cross during a competition to retrieve it from the water during Epiphany day celebrations in the port village of Zygi, near Limassol, Cyprus, January 6, 2018. (Photo by Yiannis Kourtoglou/Reuters) 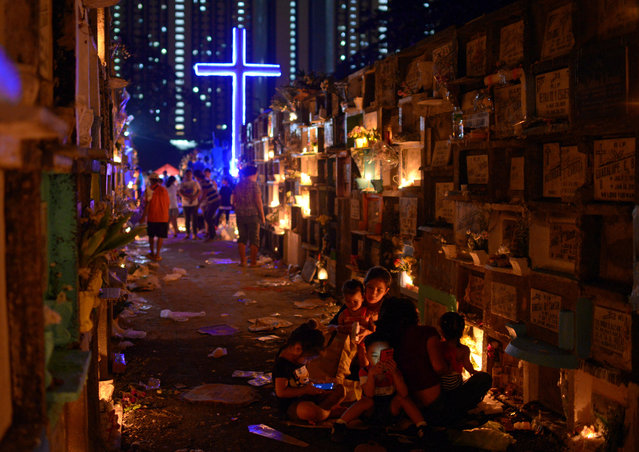 Filipino families visit the graves of their departed loved ones during All Saints Day in a public cemetery in Makati City, Metro Manila, Philippines, November 1, 2018. (Photo by Eloisa Lopez/Reuters) 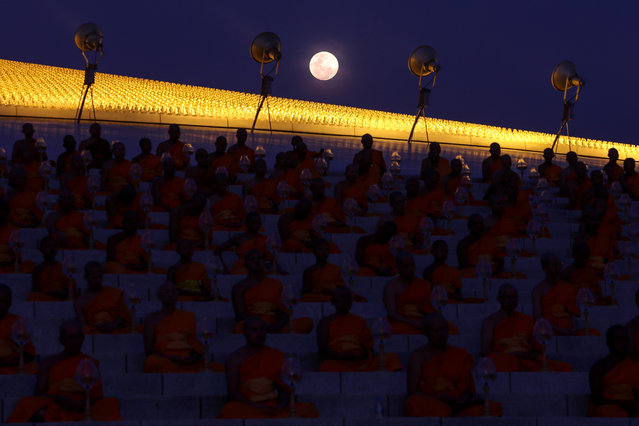 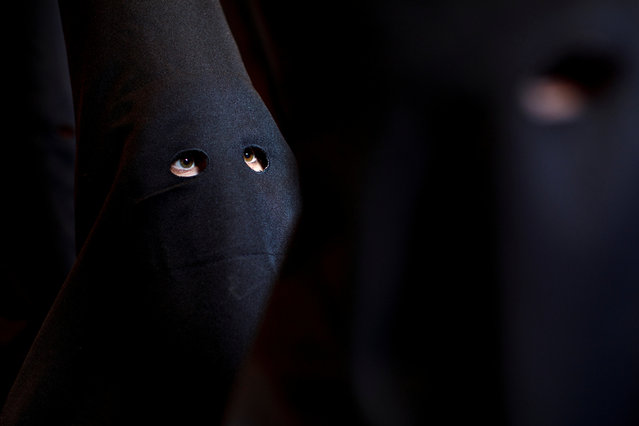 Penitents of Los Estudiantes brotherhood wait for the start of the procession during Holy Week in Madrid, Spain, March 25, 2018. (Photo by Juan Medina/Reuters) 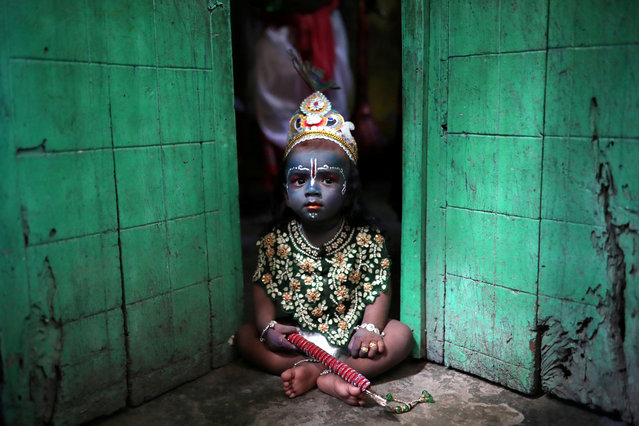 A child sits on a doorstep, dressed as Lord Krishna during Janmashtami festival, which marks the birth anniversary of Lord Krishna in Dhaka, Bangladesh, September 2, 2018. (Photo by Mohammad Ponir Hossain/Reuters) 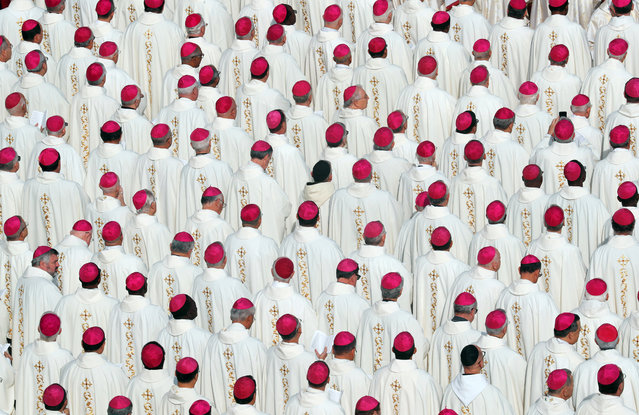 Bishops attend a Mass for the canonisation of the Pope Paul VI and El Salvador's Archbishop Oscar Romero at the Vatican, October 14, 2018. (Photo by Alessandro Bianchi/Reuters) 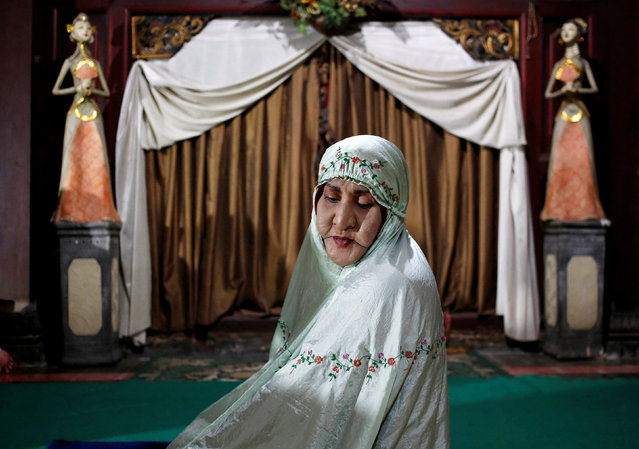 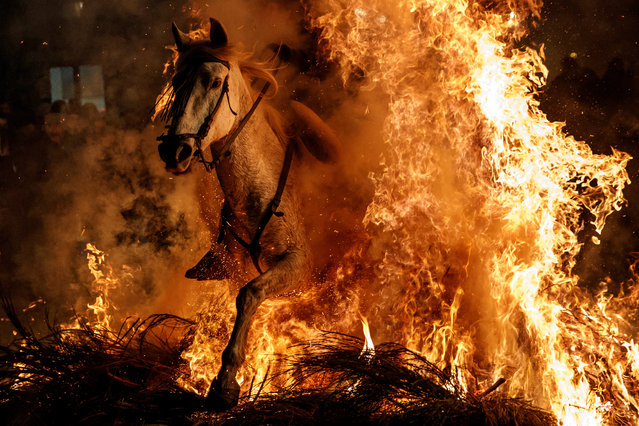 A man rides a horse through flames during the annual Luminarias celebration on the eve of Saint Anthony's day, Spain's patron saint of animals, in the village of San Bartolome de Pinares, northwest of Madrid, Spain, January 16, 2018. (Photo by Juan Medina/Reuters) 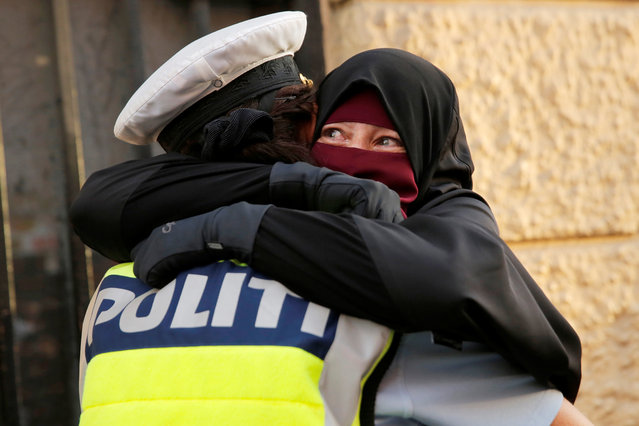