Navalny, an anti-corruption campaigner who led the biggest protests against Putin since he took power in 2000, hugged his wife Yulia and his mother, shook his father's hand and then passed them his watch before being led him away in handcuffs.

“Shame! Disgrace!” protesters chanted outside the court in Kirov, about 900 km (550 miles) northeast of Moscow. Some of his supporters burst into tears and other opposition activists could barely hide their shock and anger.

The United States and European Union expressed concern over the conviction, saying it raised questions about the rule of law in Russia and Putin's treatment of opponents. Russian shares fell on concerns the ruling could provoke social unrest.

In a last message from court, Navalny, 37, referred to Putin as a toad who abuses Russia's vast oil revenues to stay in power and made clear he expected his supporters to press his campaign.

“Okay, don't miss me. More important – don't be idle”, he wrote on Twitter. The opposition said they planned a series of protests, starting later on Thursday in Moscow where police were out in force.

State prosecutors had asked the court to jail Navalny for six years on charges of organizing a scheme to steal at least 16 million roubles ($494,400) from a local timber firm when he was advising the Kirov region governor in 2009.

But even a five-year sentence means he will not be able to run in the next presidential election in 2018 or for Moscow mayor in September as he had planned. Some political analysts had expected the court to hand down a suspended sentence to avoid prison time but still rule out any political challenge.

“The court, having examined the case, has established that Navalny organized a crime and ... the theft of property on a particularly large scale”, Judge Sergei Blinov said, reading rapidly and without emotion. He hardly looked up while reading the verdict, which took about three and a half hours.

Pyotr Ofitserov, Navalny's co-defendant, was convicted as an accomplice and sentenced to four years in prison.

Navalny, a powerful orator who has accused the authorities of being “swindlers and thieves”, stood silent with a puzzled expression as he listened to the verdict”. – Maria Tsvetkova, Alexei Anishchuk, Steve Gutterman, Timothy Heritage, Elizabeth Piper via Reuters) 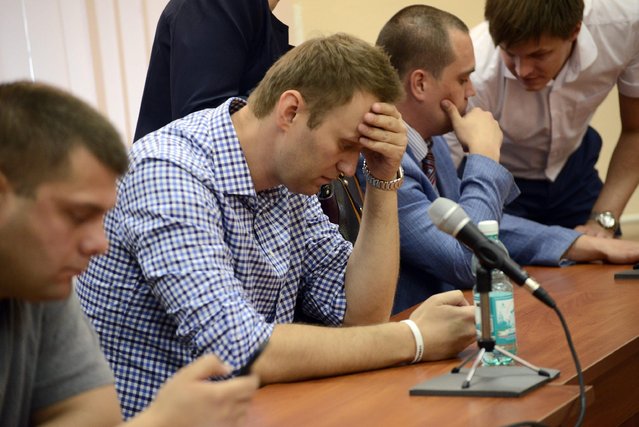 Russian opposition figure, Alexei Navalny (C), reacts as the court delivers the verdict in his trial, in the city of Kirov, Russia, 18 July 2013. Russian opposition leader Alexei Navalny was found guilty of embezzlement on 18 July by a city court, news agencies reported. The sentence was expected to be handed down after the judge finished reading the verdict later in the day. In the politically charged trial, Navalny was accused of stealing 500,000 dollars worth of timber from a state enterprise while serving as a regional government adviser in Kirov, a city 800 kilometres east of Moscow, where the court was also located. Prosecutors have asked for Navalny to be sentenced to six years in a labour camp. Navalny denied the charges and has called the trial politically motivated. (Photo by Valentina Svistunova/EPA)