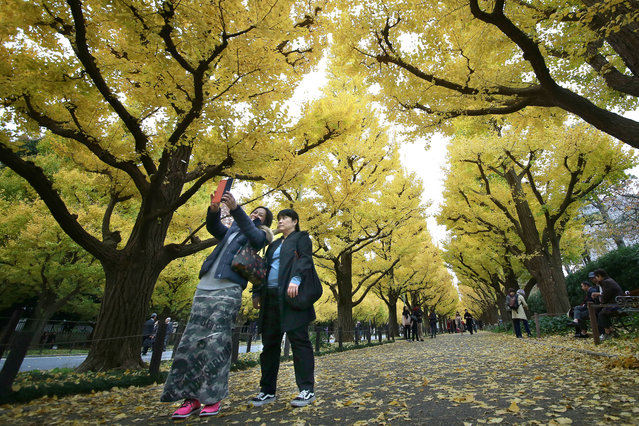 Women take a selfie with yellow leaves of ginkgo trees at Jingu Gaien, the outer garden of Meiji Jingu Shrien, in Tokyo, Monday, November 21, 2016. The avenue, lined with more than 100 gingko trees, attracts hundreds of thousands of people every autumn to admire beautifully colored leaves. (Photo by Shizuo Kambayashi/AP Photo) 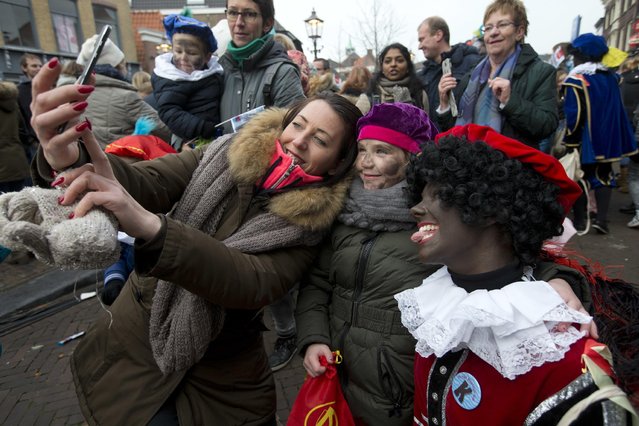 A mother takes a selfie with her daughter and a Black Pete during the arrival of Sinterklaas, the Dutch Saint Nicholas, in Maassluis, Netherlands, Saturday, November 12, 2016. Sinterklaas and his helper Black Pete are at the center of a long-time controversy because Pete is often played by white people in blackface makeup. (Photo by Peter Dejong/AP Photo) 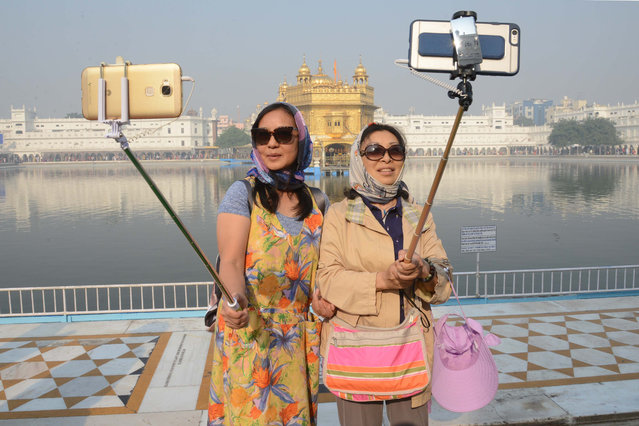 Chinese tourists take a “selfie” at the Golden Temple in Amritsar on November 14, 2016, as Sikh devotees mark the 547 th birth anniversary of Sri Guru Nanak Dev. Guru Nanak was the founder of the Sikh religion and the first of ten Sikh gurus. (Photo by Narinder Nanu/AFP Photo) 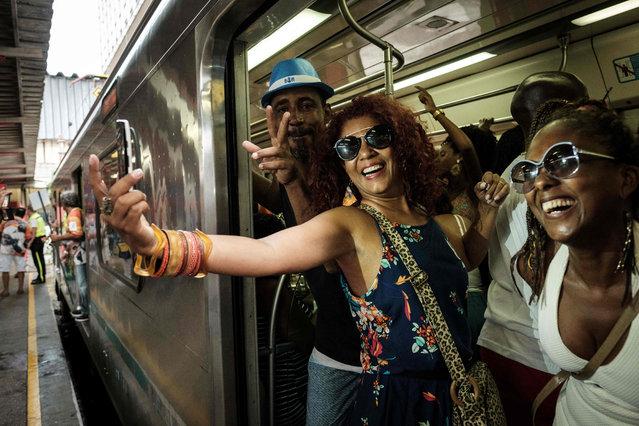 A woman takes a “selfie” after riding the Samba Train, the annual special train carrying samba musicians and enthusiasts, part of celebrations of the national samba day and the 100 th anniversary of Samba at the Central do Brasil train station in Rio de Janeiro, Brazil, on December 3, 2016. (Photo by Yasuyoshi Chiba/AFP Photo) 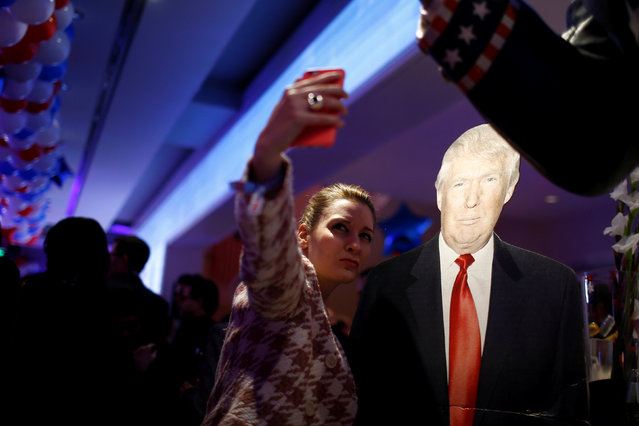 A woman photographs herself with a cardboard figure of U.S. Republican presidential candidate Donald Trump in Berlin, Germany, November 8, 2016. (Photo by Axel Schmidt/Reuters) 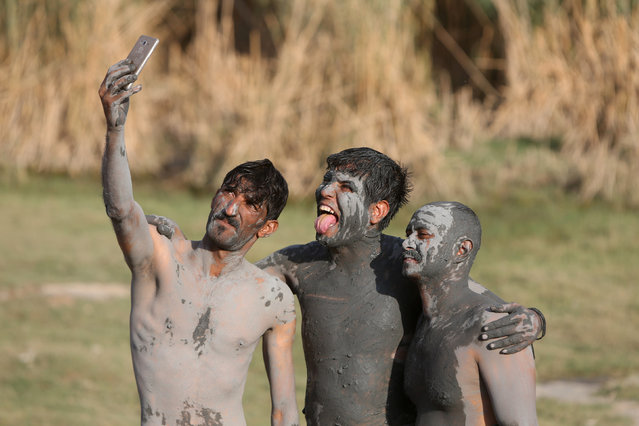 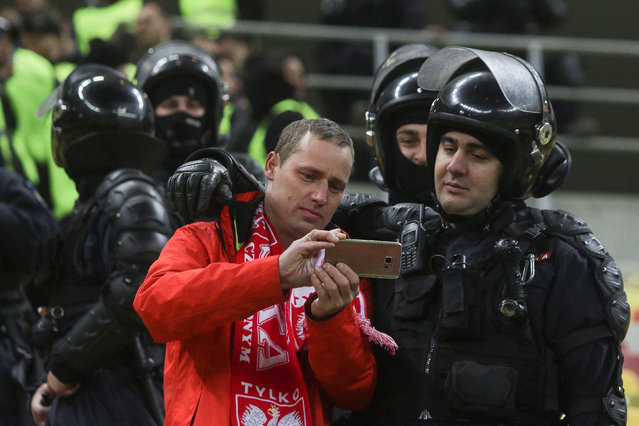 Football Soccer, Romania vs Poland, World Cup 2018 Qualifiers, National Arena Stadium, Bucharest, Romania on November 11, 2016. A Polish fans snaps a selfie with a Romanian gendarme at the end of the match. (Photo by Octav Ganea/Reuters/Inquam Photos) 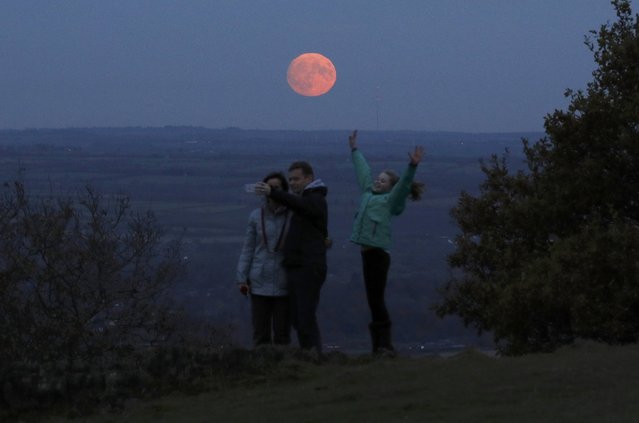 A family take a selfie as the moon rises a day before the “supermoon” spectacle on Beacon Hill near Loughborough, Britain, November 13, 2016. (Photo by Darren Staples/Reuters) 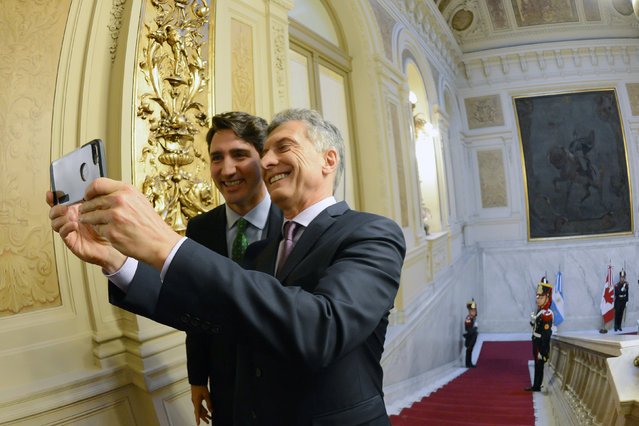 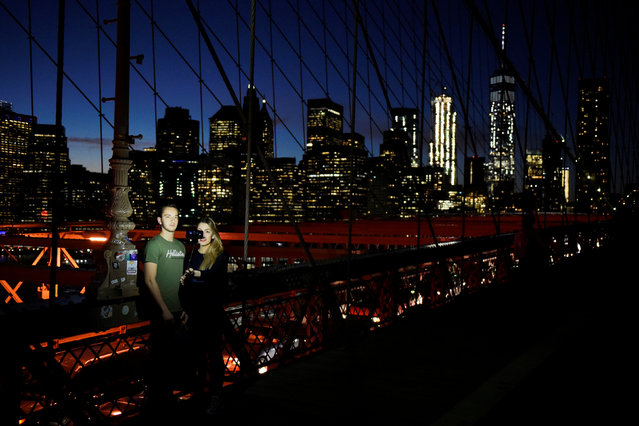 Quentin Brian and Marine Brian take a selfie on the Brooklyn Bridge over the East River between the boroughs of Brooklyn and Manhattan in New York City, U.S. November 18, 2016. (Photo by Mark Kauzlarich/Reuters) 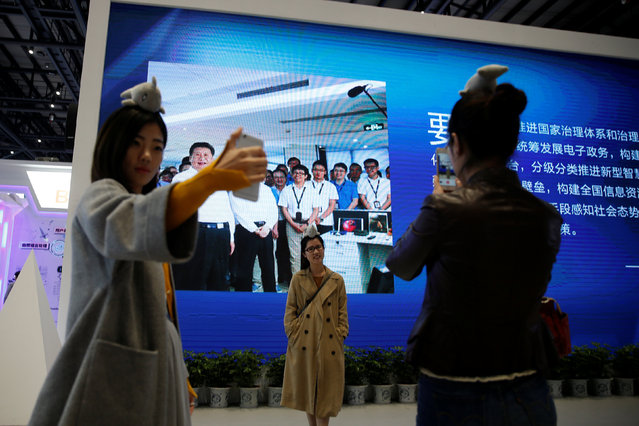 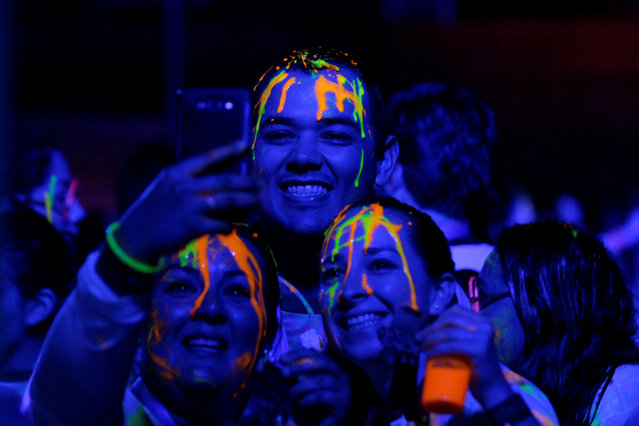 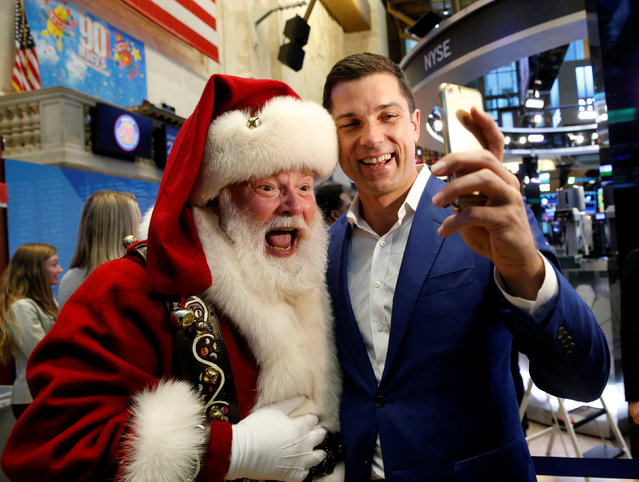 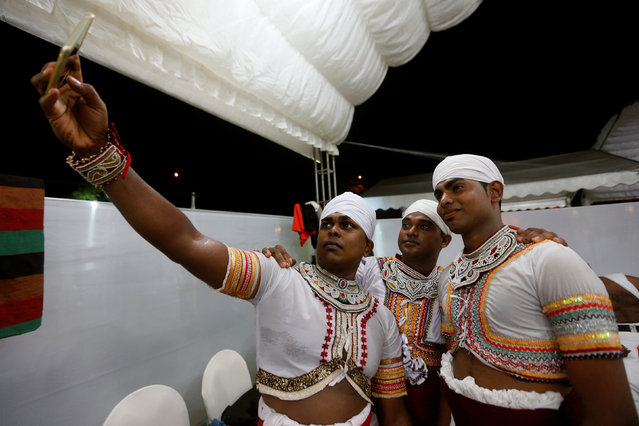 Traditional dancers take a selfie before the performances at a Gara demon ceremony in Colombo, Sri Lanka November 25, 2016. (Photo by Dinuka Liyanawatte/Reuters) 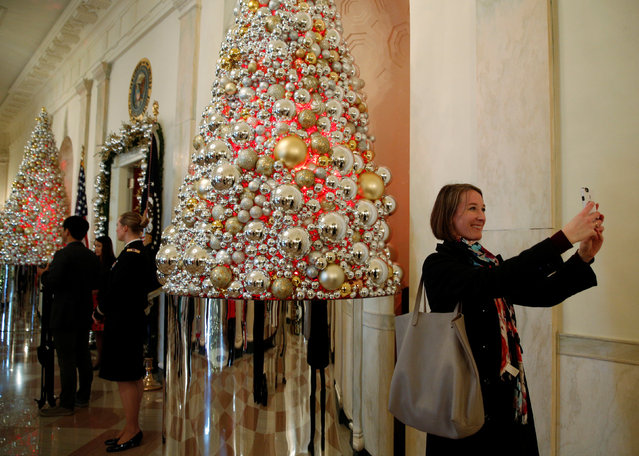 A woman takes a photo in the Cross Hall during a holiday decor preview of the White House in Washington, U.S., November 29, 2016. (Photo by Kevin Lamarque/Reuters) 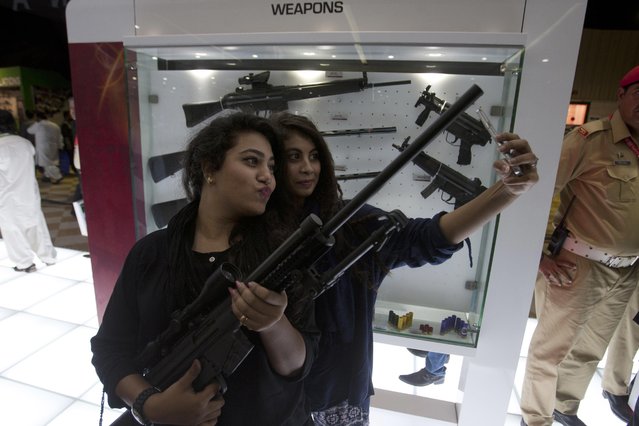 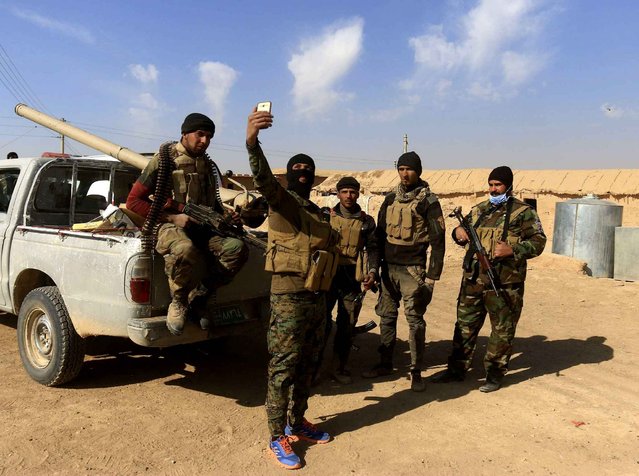 Fighters of Popular Mobilization Forces take a photo at the fighting lines against Islamic State Group militants outside Mosul, Iraq, Saturday, November 26, 2016. Iraq's parliament on Saturday voted to accord full legal status to government-sanctioned Shiite militias as a “back-up and reserve” force for the military and police and empower them to “deter” security and terror threats facing the country, like the Islamic State group. (Photo by Anmar Khalil/AP Photo) 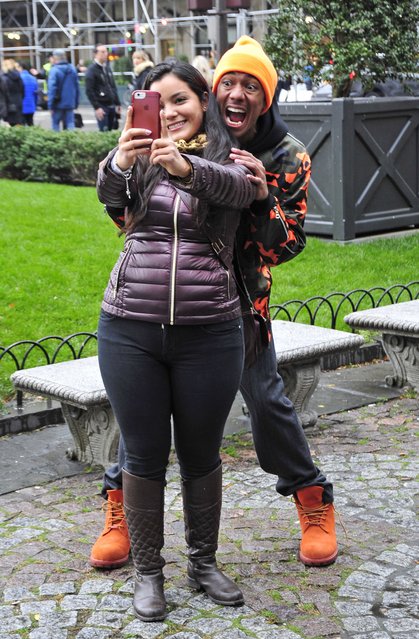 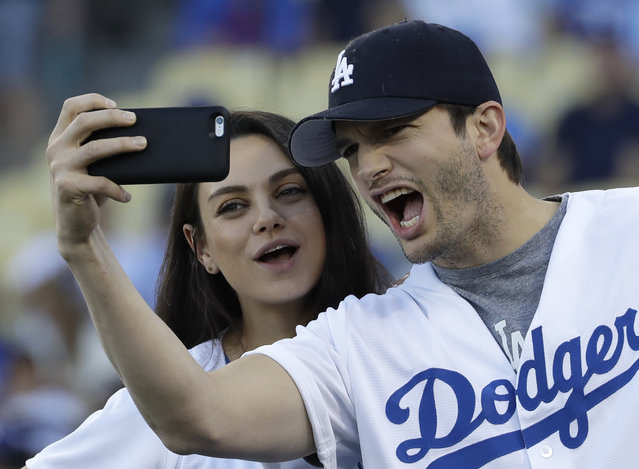 In this October 19, 2016, file photo, Ashton Kutcher and wife Mila Kunis take a selfie before Game 4 of the National League baseball championship series between the Chicago Cubs and the Los Angeles Dodgers in Los Angeles. Kunis and Kutcher are parents for the second time. A publicist for the actress said in an email Thursday, Dec. 1, that Kunis had given birth. (Photo by David J. Phillip/AP Photo) 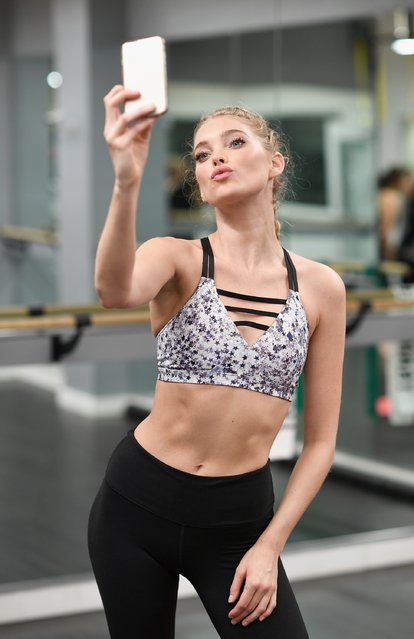