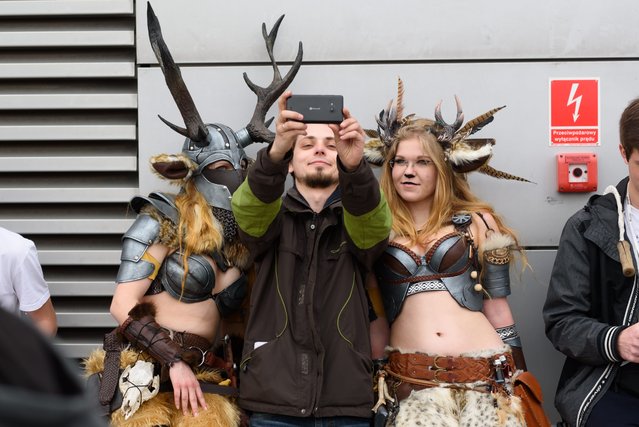 People in costume take a selfie at the 2016 Pyrkon Festival, a multigenre fantasy convention, in Poznan, Poland, April 9, 2016. Pyrkon is one of the biggest conventions and gaming events in Europe. The festival runs until 10 April. (Photo by Jakub Kaczmarczyk/EPA) 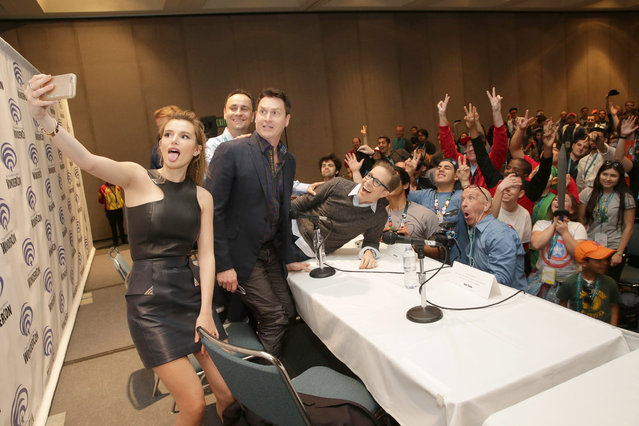 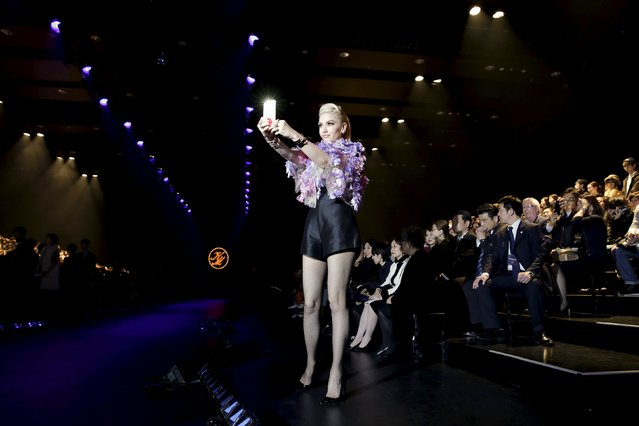 U.S. singer-songwriter Gwen Stefani takes pictures of the media before a fashion show by Keita Maruyama of his Autumn/Winter 2016 collection during Tokyo Fashion Week in Tokyo, Japan, March 14, 2016. (Photo by Thomas Peter/Reuters) 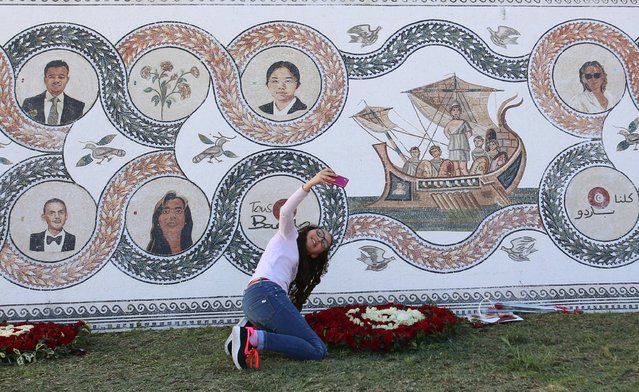 A girl takes a selfie in front of the mosaic portraits of the victims of a militant attack on the Bardo national museum in March 2015 that killed 21 people, at the museum in Tunis, Tunisia March 19, 2016. (Photo by Zoubeir Souissi/Reuters) 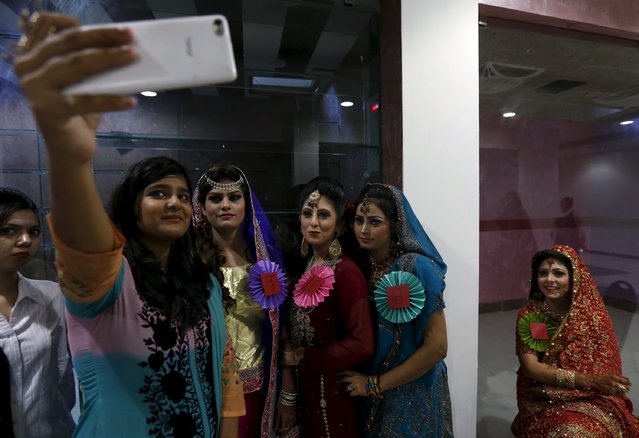 A girl takes a selfie with models backstage after a self grooming bridal beauty workshop at a local mall in Karachi, Pakistan, March 22, 2016. (Photo by Akhtar Soomro/Reuters) 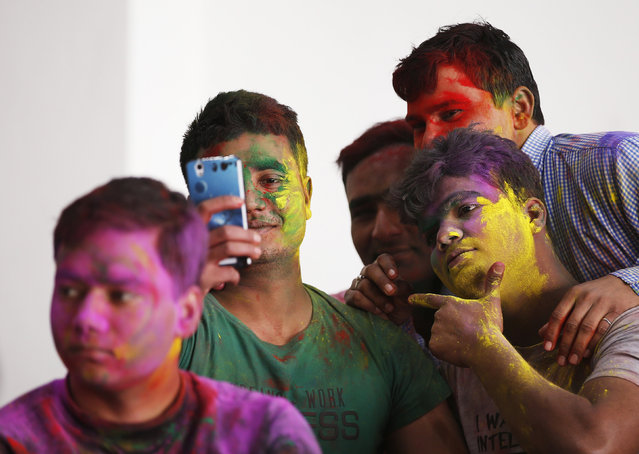 Indian Border Security Force (BSF) soldiers with their faces smeared in coloured powder take a selfie during Holi celebrations at their camp in Humhama, on the outskirts of Srinagar, India March 24, 2016. (Photo by Danish Ismail/Reuters) 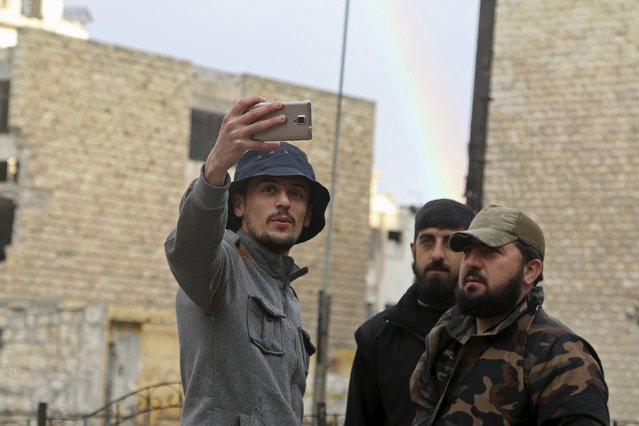 A man takes a selfie with rebel fighters in front of a rainbow in the rebel held area of Aleppo's Salah al-Din neighbourhood, Syria March 28, 2016. (Photo by Abdalrhman Ismail/Reuters) 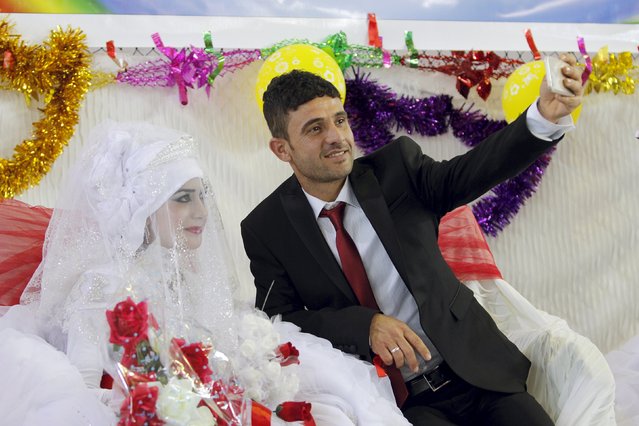 A groom takes a selfie with his bride during a mass wedding ceremony for Turkmen who are displaced and have fled the violence in the province of Nineveh, in Kirkuk, Iraq, April 7, 2016. (Photo by Ako Rasheed/Reuters) 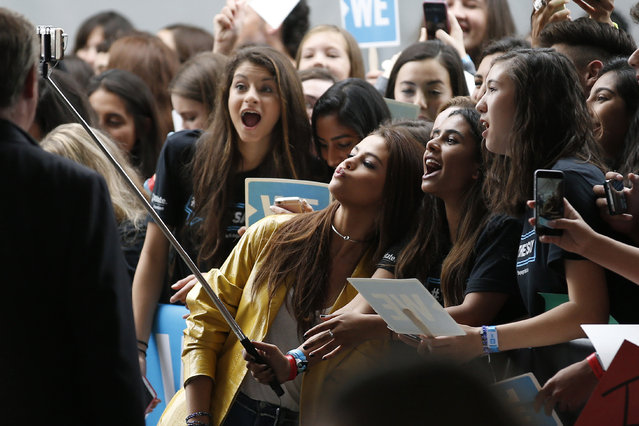 Singer Selena Gomez poses for a selfie stick photo with students as she arrives at We Day California in Inglewood, California, April 7, 2016. (Photo by Danny Moloshok/Reuters) 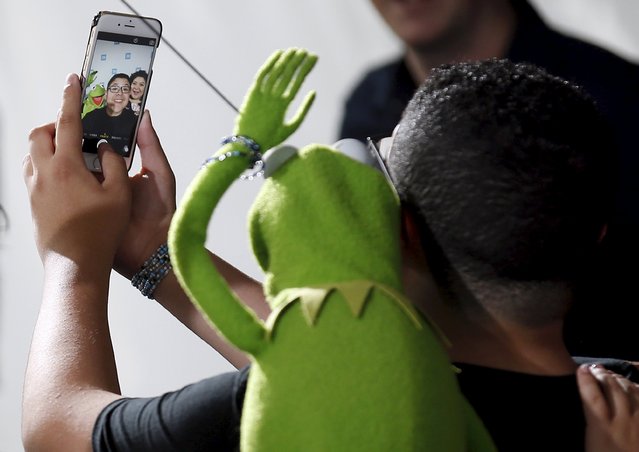 Actor Rico Rodriguez and Raini Rodriguez pose for a selfie photo with Kermit the Frog during We Day California in Inglewood, California, April 7, 2016. (Photo by Danny Moloshok/Reuters) 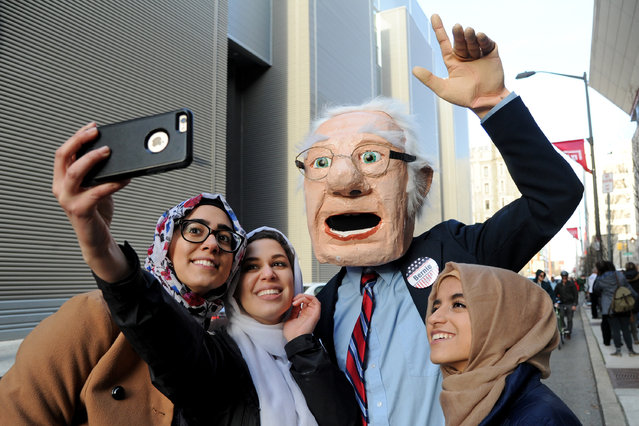 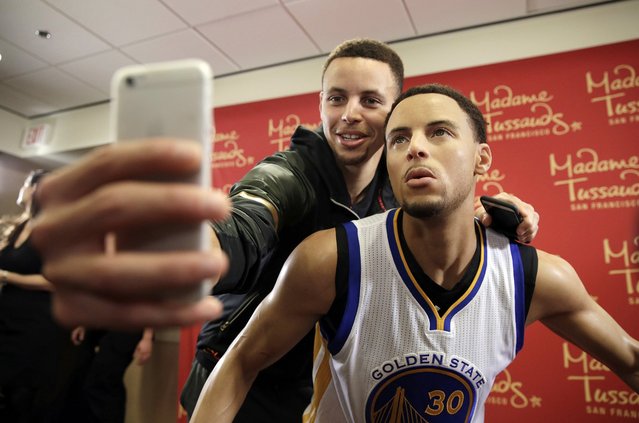 Golden State Warriors guard Stephen Curry, left, takes a selfie with his wax figure by Madame Tussauds after its unveiling Thursday, March 24, 2016, in Oakland, Calif. The figure of the NBA MVP will go on display at Madame Tussauds wax museum at Fisherman's Wharf in San Francisco. (Photo by Eric Risberg/AP Photo) 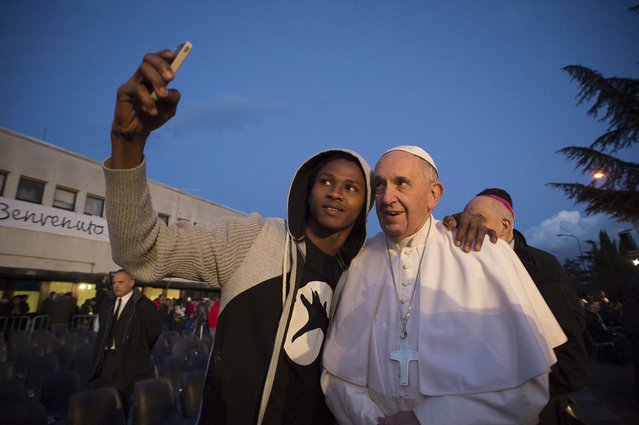 Pope Francis poses for a selfie during his visit at the Castelnuovo di Porto refugees center, some 30km (18, 6 miles) from Rome, Thursday, March 24, 2016. The pontiff washed and kissed the feet of Muslim, Orthodox, Hindu and Catholic refugees Thursday, declaring them children of the same God, in a gesture of welcome and brotherhood at a time when anti-Muslim and anti-immigrant sentiment has spiked following the Brussels attacks. (Photo by L'Osservatore Romano/Pool Photo via AP Photo) 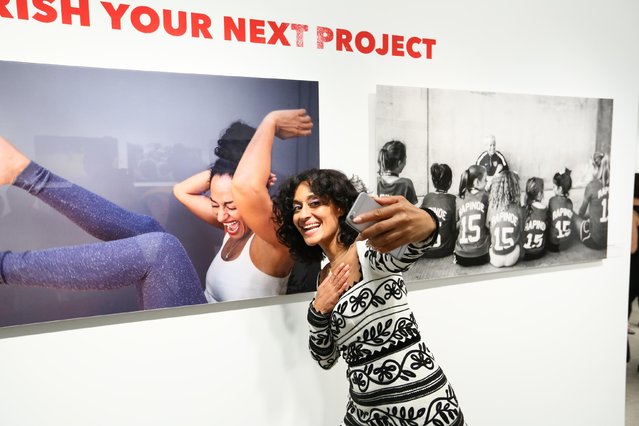 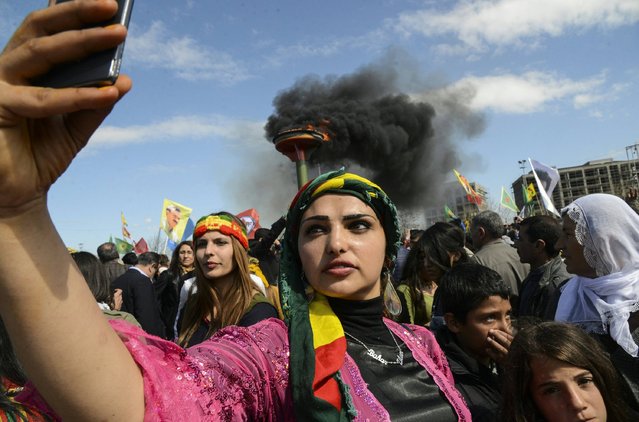 A woman takes a selfie picture as Turkish Kurds gather as part of Newroz celebrations in Diyarbakir, on March 21, 2016. Nowruz, the Farsi-language word for “New Year”, is an ancient Persian festival, celebrated on the first day of spring, on March 21, in Central Asian republics, Iraq, Turkey, Afghanistan and Iran. (Photo by Ilyas Akengin/AFP Photo) 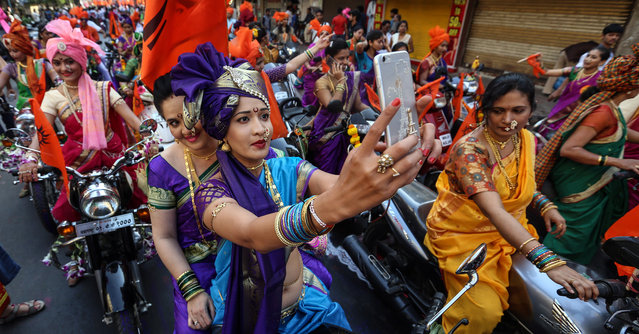 Indian people in traditional clothes participate in the procession to celebrate the Gudi Padwa, Maharashtrian's New Year in Mumbai, India on April 8, 2016. Gudi Padwa is the Hindu festival that falls on the first day of Chaitra month and marks the beginning of the Lunar Calendar, which dictates the dates for all Hindu festivals, also known as Panchang. (Photo by Divyakant Solanki/EPA) 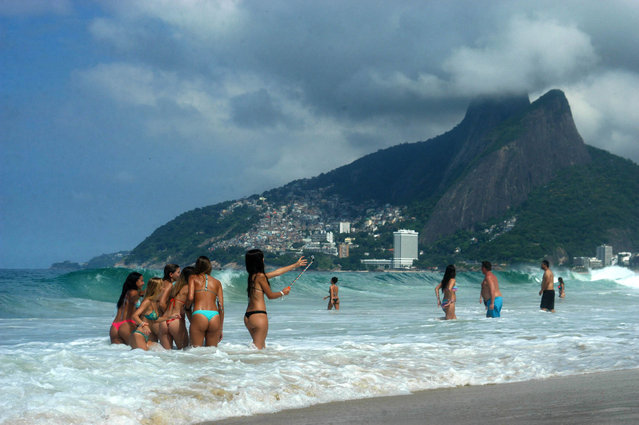 Bathers take photo with a stick-to-selfie on Ipanema beach, in the South Zone of Rio de Janeiro, Brazil on March 15, 2016. (Photo by Alessandro Buzas/Futura Press/Estadão Conteúdo) 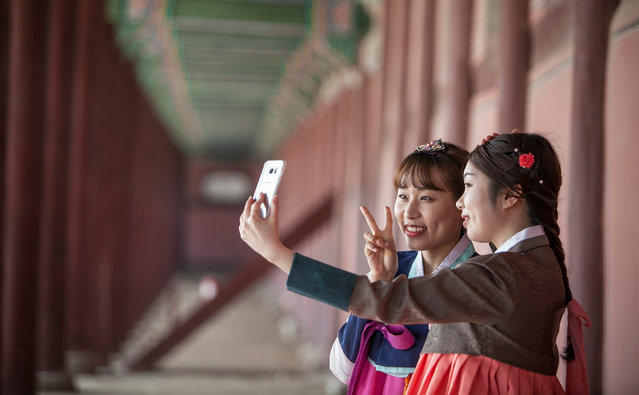 Young Koreans wearing hanbok (Korean traditional dress) take a sefie inside Gyeongbok Palace on March 27, 2016 in Seoul, South Korea. There has been a trend in recent years for the young Koreans to wear the traditional Korean dress, Hanbok. Wearing the traditional dress, they will walk around downtown Seoul on weekends taking selfies, and share their memories with friends on social media, and also to promote their traditional dress to foreign visitors. (Photo by Jean Chung/Getty Images) 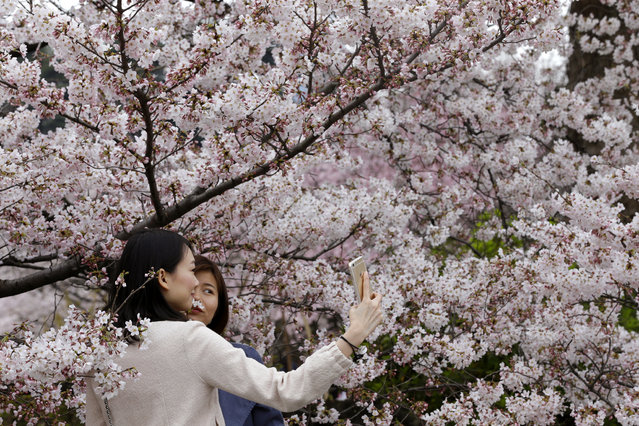 Women take a selfee with blooming cherry blossoms at Shinjuku Gyoen National Garden in Tokyo, Wednesday, March 30, 2016. Visitors enjoy a total of 1,100 cherry trees of 65 different types that start to bloom from February until the end of April at the park. (Photo by Shizuo Kambayashi/AP Photo) 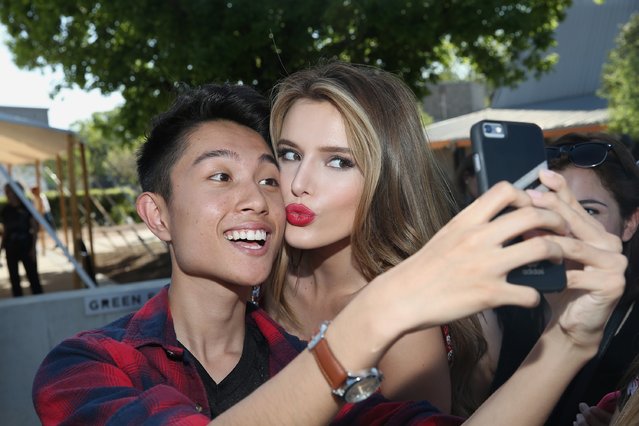