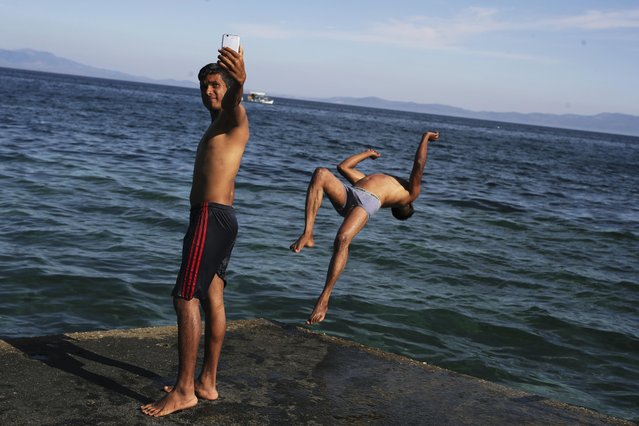 A Bangladeshi migrant takes a selfie as his friend jumps in the sea near the port of Mytilini on the northeastern Greek island of Lesbos, Greece, on Friday October 7, 2016. More than a million migrants and refugees crossed through Greece and on to other EU countries since the start of 2016, while over 60,000 have been stranded in the country since the EU-Turkey deal took effect and the Balkan transit route north was closed. (Photo by Petros Giannakouris/AP Photo) 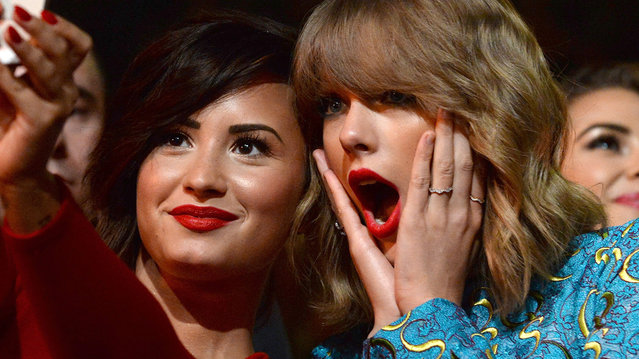 Recording artists Demi Lovato (L) and Taylor Swift take a selfie at the 2014 MTV Video Music Awards at The Forum on August 24, 2014 in Inglewood, California. (Photo by Jeff Kravitz/MTV1415/FilmMagic) 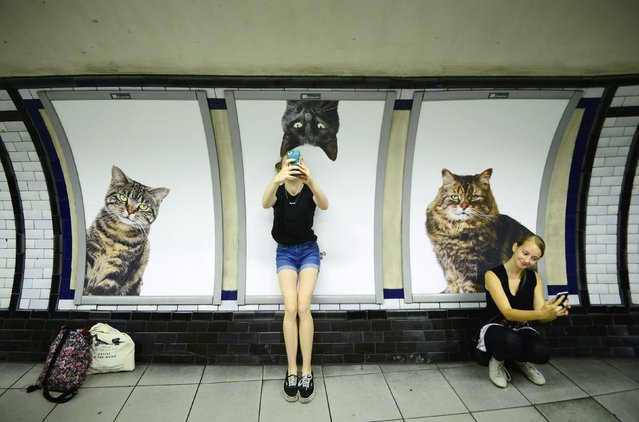 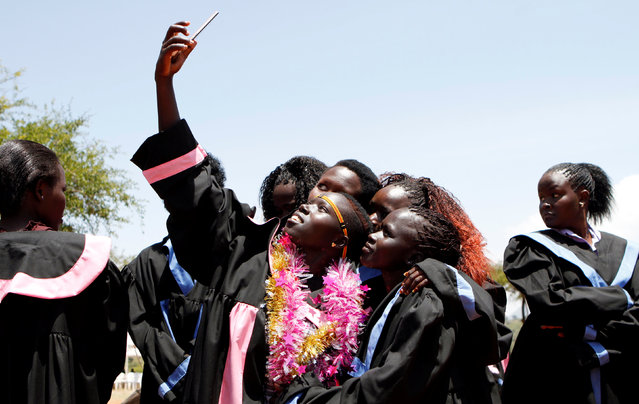 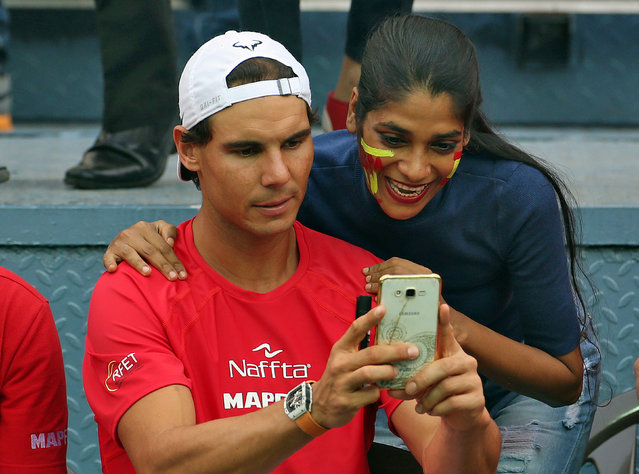 Spain's Rafael Nadal takes a selfie with a fan during the Davis cup tie against India in Delhi, India, September 18, 2016. (Photo by Cathal McNaughton/Reuters) 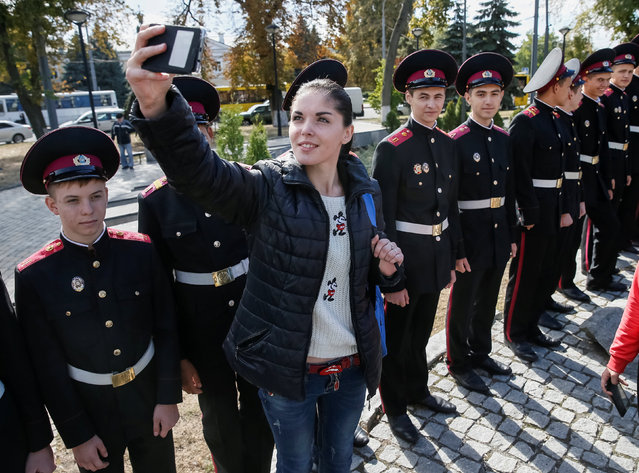 A woman takes a selfie with military cadets as they attend a Peace March to mark the International Day of Peace in Kiev, Ukraine, September 21, 2016. (Photo by Gleb Garanich/Reuters) 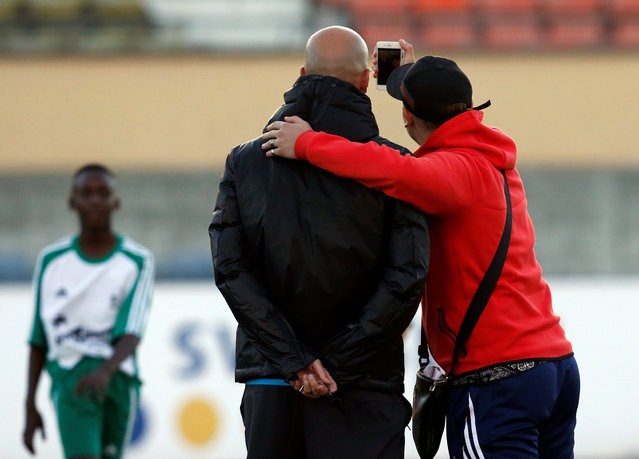 A spectator takes a selfie with Real Madrid's coach Zinedine Zidane during a training session for a selection of U14 players of the Canton de Vaud in the Pontaise stadium in Lausanne, Switzerland, October 3, 2016. (Photo by Denis Balibouse/Reuters) 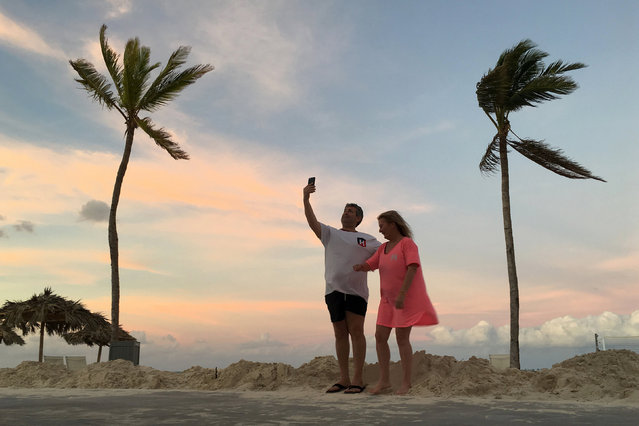 A couple videochats on their smartphone on the beach in the aftermath of Hurricane Matthew near Nassau, Bahamas October 9, 2016. (Photo by Carlo Allegri/Reuters) 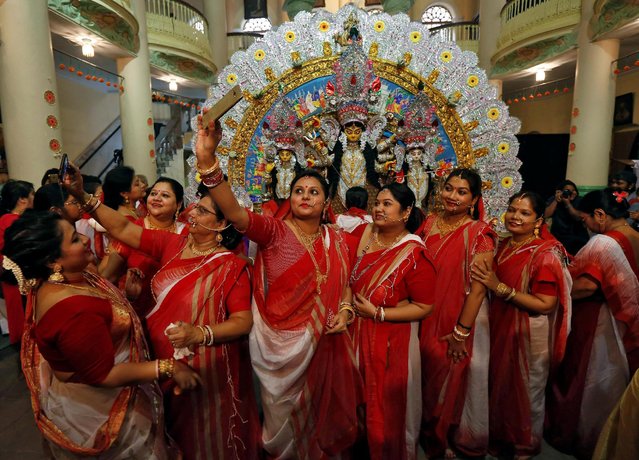 Hindu women use their mobile phones to take pictures after worshipping the idol of the Hindu goddess Durga on the last day of the Durga Puja festival in Kolkata, India October 11, 2016. (Photo by Rupak De Chowdhuri/Reuters) 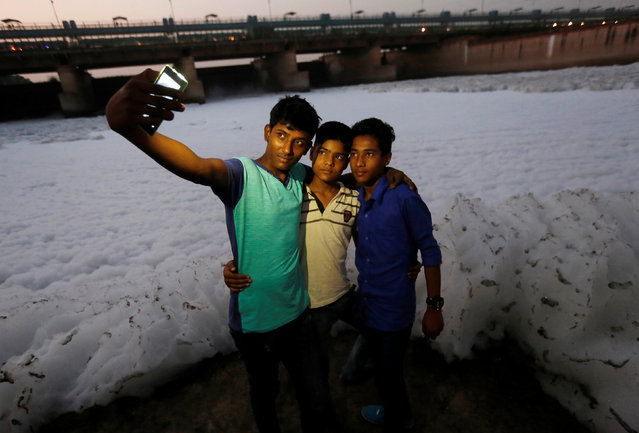 Boys pose for a selfie in front of the foam covering the polluted Yamuna river in New Delhi, India, October 11, 2016. (Photo by Adnan Abidi/Reuters) 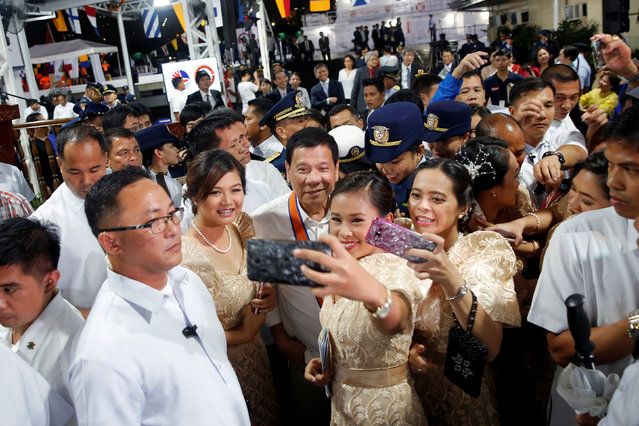 Philippines President Rodrigo Duterte is having his pictures taken with three girls as they attend the ceremony marking the anniversary of the Philippines Coast Guard in Manila, Philippines, October 12, 2016. (Photo by Damir Sagolj/Reuters) 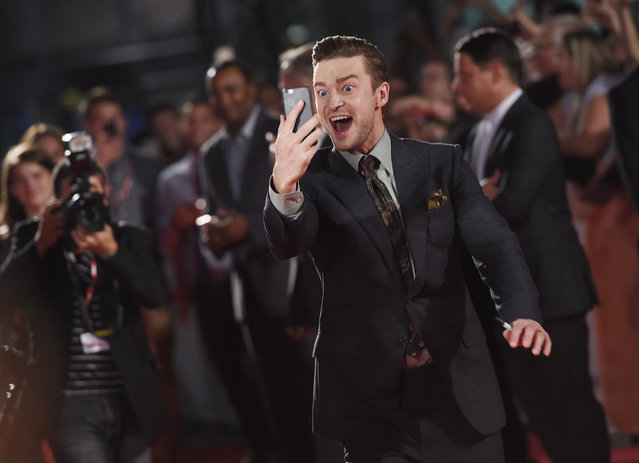 Justin Timberlake, star of the concert film “Justin Timberlake + The Tennessee Kids”, films fans on his cell phone as he arrives at the premiere of the film on day 6 of the Toronto International Film Festival at Roy Thomson Hall on Tuesday, September 13, 2016, in Toronto. (Photo by Chris Pizzello/Invision/AP Photo) 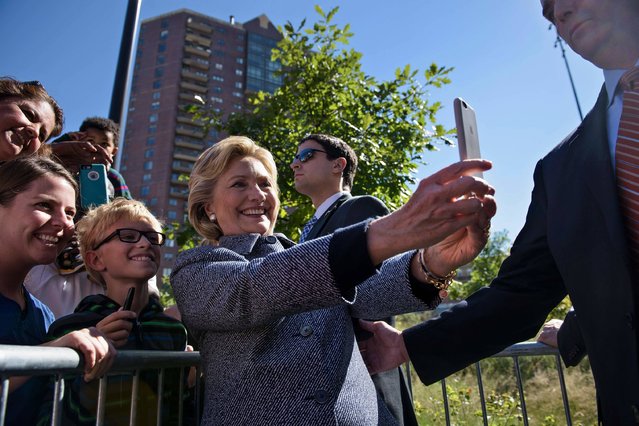 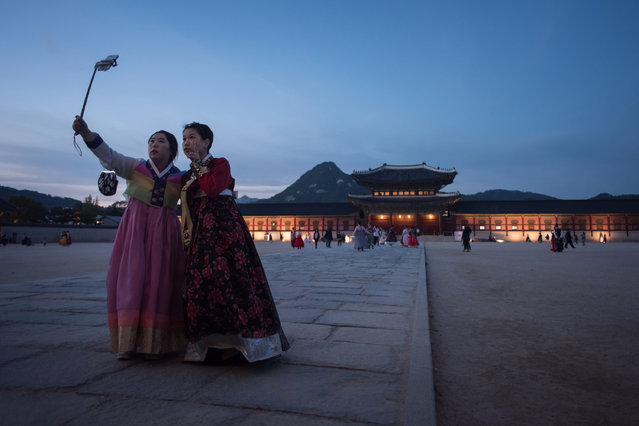 Two women wearing traditional hanbok dresses pose for a selfie before Gyeongbokgung palace in Seoul on October 12, 2016. Samsung Electronics slashed its latest quarterly profit estimate by one third in the wake of a highly damaging recall crisis that ended with the scrapping of its latest flagship smartphone. (Photo by Ed Jones/AFP Photo) 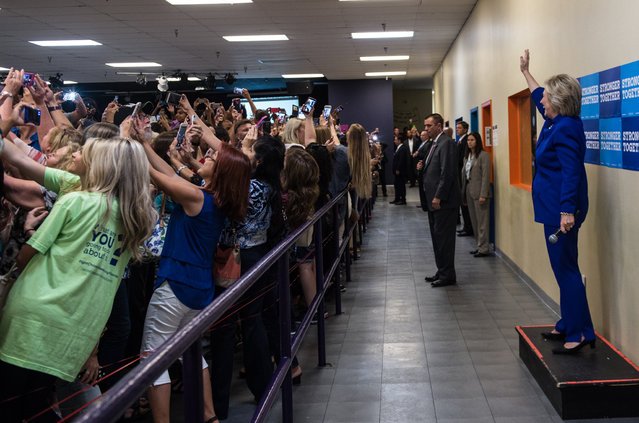 Hillary Clinton waves to a selfie-taking crowd at a recent campaign event in Orlando, Florida on September 26, 2016. (Photo by Barbara Kinney/Hillary for America) 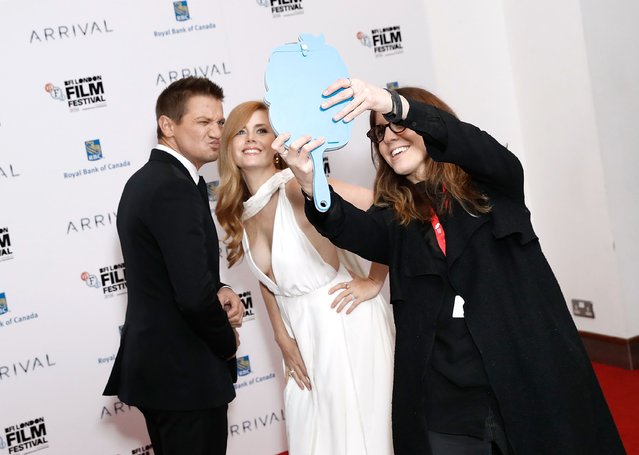 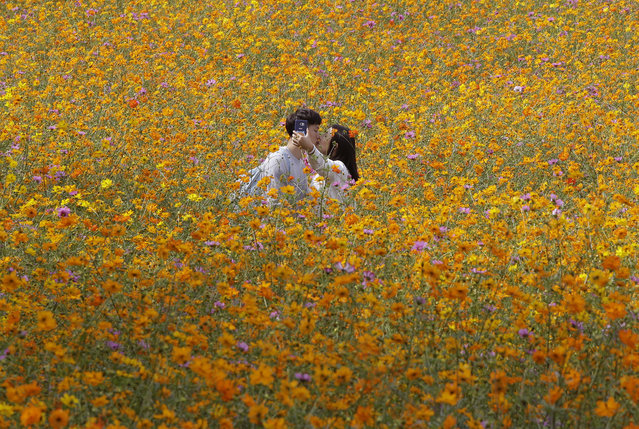 A couple kisses while they take pictures in the middle of a cosmos field at Olympic Park in Seoul, South Korea, Wednesday, September 21, 2016. (Photo by Ahn Young-joon/AP Photo) 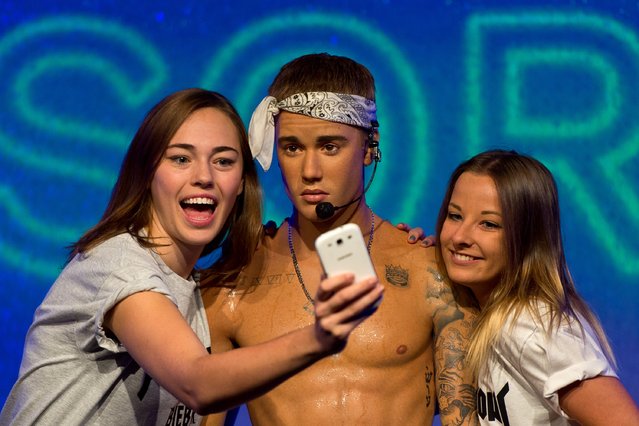 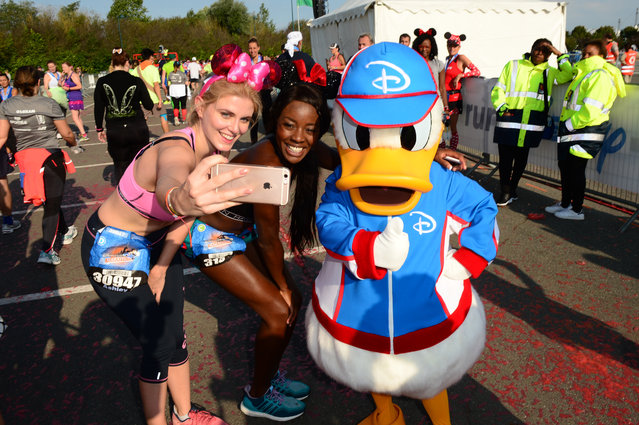