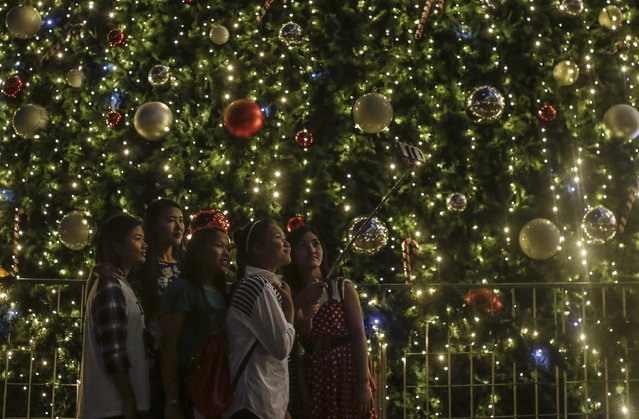 Women take a selfie in front of a Christmas trees in Kuala Lumpur, Malaysia, December 22, 2015. Christmas is celebrated by Christians on Dec. 25 to commemorate the birth of Jesus, the central figure of Christianity. (Photo by Fazry Ismail/EPA) 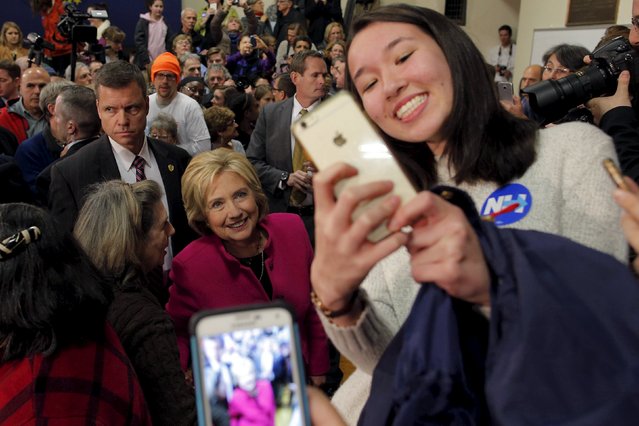 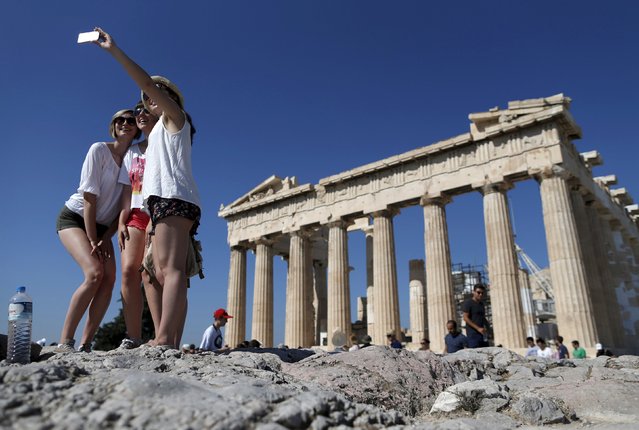 A group of tourists take a selfie in front of the temple of the Parthenon atop the Acropolis in Athens, Greece in this July 9, 2015 file photo. (Photo by Christian Hartmann/Reuters) 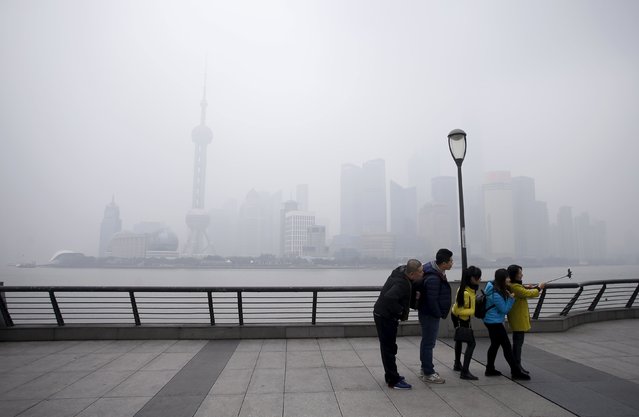 Tourists take selfies at the bund as the financial district of Pudong (rear) is seen amid heavy smog, in Shanghai, China, December 11, 2015. (Photo by Aly Song/Reuters) 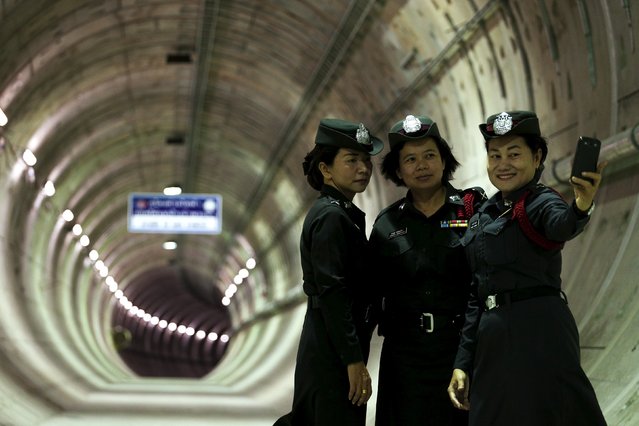 Policewomen take a picture inside a tunnel under the Chao Phraya river at a Mass Rapid Transit subway station in Bangkok, Thailand, December 14, 2015. (Photo by Athit Perawongmetha/Reuters) 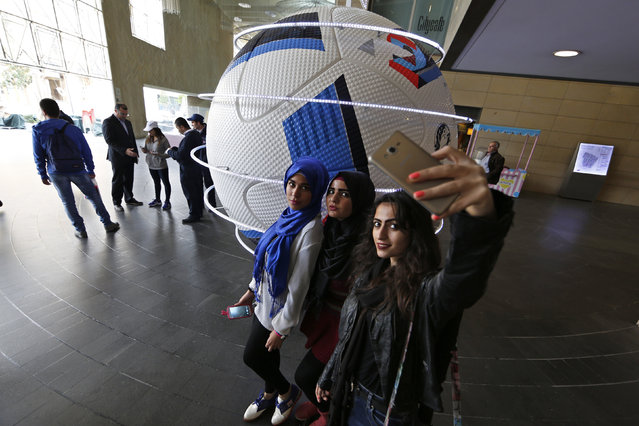 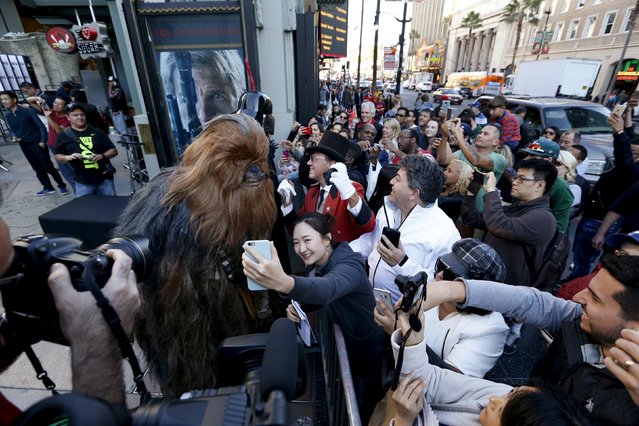 A person dressed as Chewbacca interacts with fans after a Star Wars themed wedding in the forecourt of the TCL Chinese Theatre in Hollywood, California December 17, 2015. (Photo by Mario Anzuoni/Reuters) 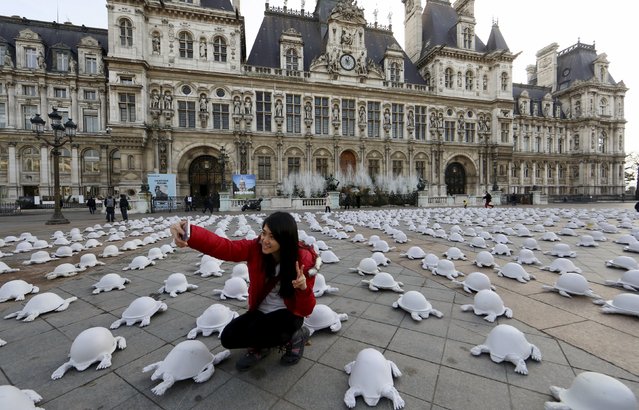 A Malaysian tourist takes a selfie near French artist Rachid Khimoune's installation which features a thousand turtle-shaped sculptures in front of the city hall in Paris, France December 19, 2015. (Photo by Jacky Naegelen/Reuters) 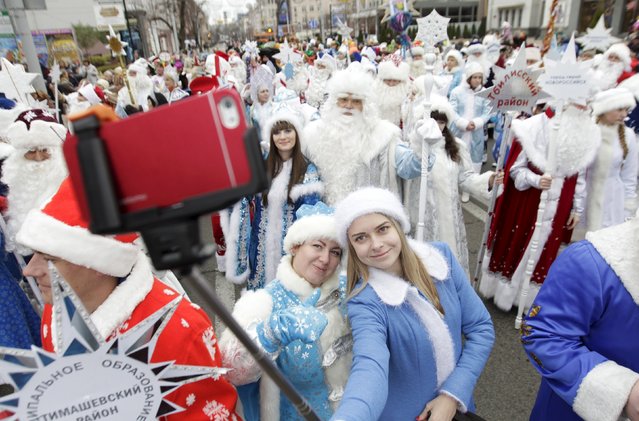 Participants take a selfie while people, dressed as Ded Moroz, his granddaughter Snegurochka and other characters, participate in a festive pre-holiday procession in Krasnodar, southern Russia, December 19, 2015. Ded Moroz (Old man Frost or Grandfather Frost) and Snegurochka (Snow Maiden) are the main characters of the New Year and Christmas holidays celebration in Russia and some other former Soviet states. (Photo by Eduard Korniyenko/Reuters) 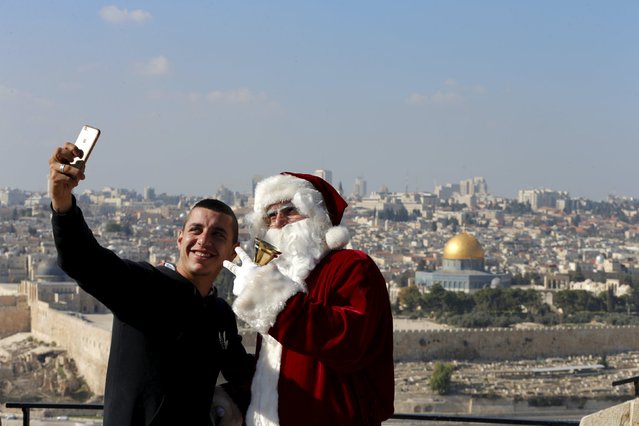 A Palestinian man takes a selfie with Israeli-Arab Issa Kassissieh as he wears a Santa Claus costume during an annual Christmas tree distribution by the Jerusalem municipality on the Mount of Olives in Jerusalem December 21, 2015. The Dome of the Rock is seen in the background. (Photo by Ammar Awad/Reuters) 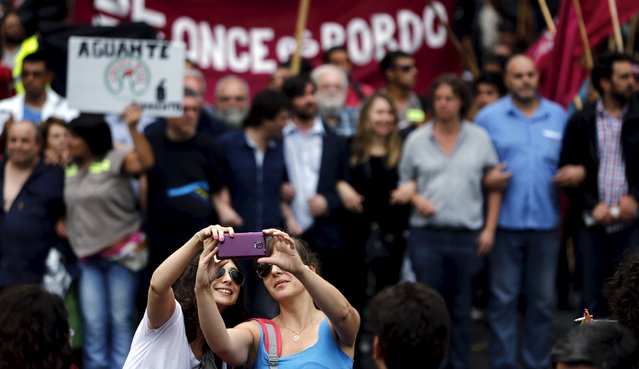 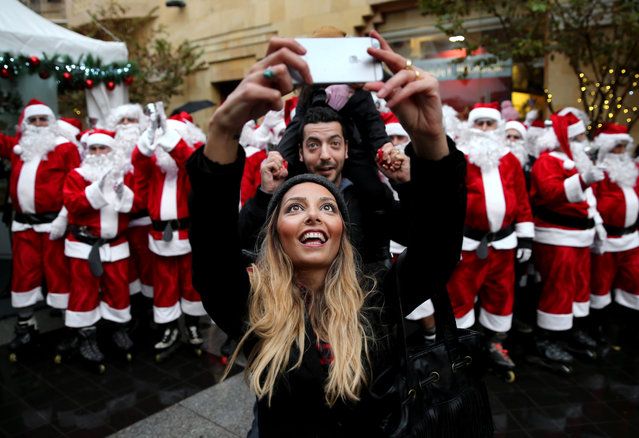 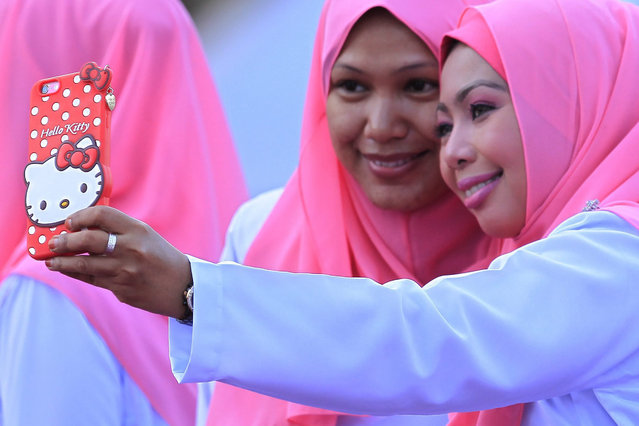 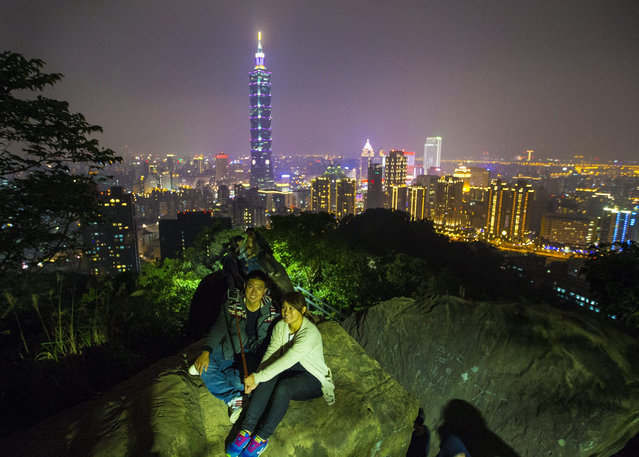 Tourists take a selfie of themselves with the nighttime lights of the city and the landmark Taipei 101 skyscraper as a colorful background as they visit the Elephant hill overlooking Taipei, Taiwan, 20 December 2015. Earlier on 20 December 2015 Taiwan welcomed its 10 millionth visitor, said by officials as a milestones in the tourism sector of Taiwan. (Photo by Ritchie B. Tongo/EPA) 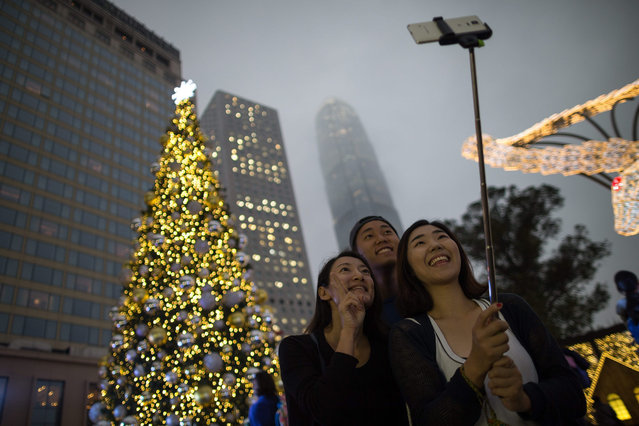 A group of friends take a selfie near a Christmas tree in the business district of Central in Hong Kong, China, 23 December 2015. Christmas is celebrated by Christians on 25 December to commemorate the birth of Jesus, the central figure of Christianity. (Photo by Jerome Favre/EPA) 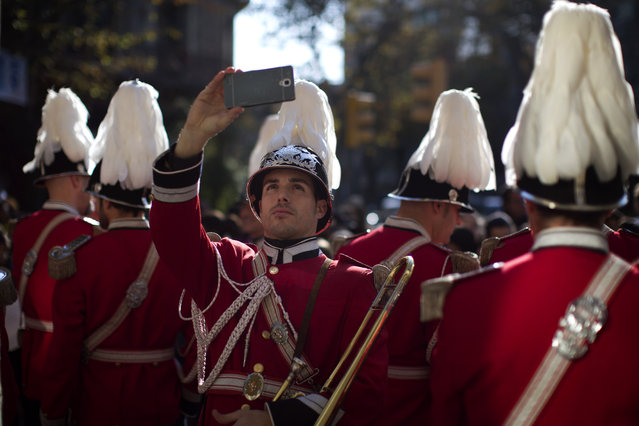 A musician of the municipal police band takes a selfie before playing their instruments as part of a campaign organized by Avismon foundation to collect food for the elderly in Barcelona, Spain, Friday, December 11, 2015. (Photo by Emilio Morenatti/AP Photo) 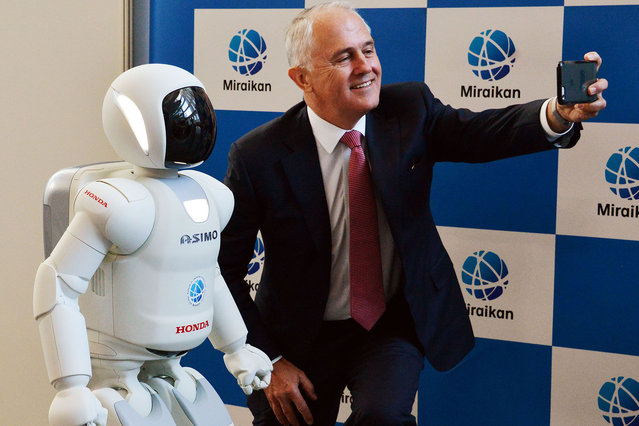 Australian Prime Minister Malcolm Turnbull takes a selfie photograph with the robot Asimo at the National Museum of Emerging Science and Innovation on December 18, 2015 in Tokyo, Japan. (Photo by Yoshikazu Tsuno-Pool/Getty Images) 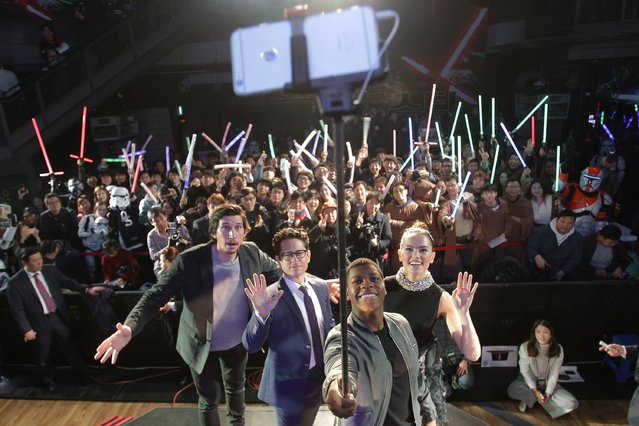 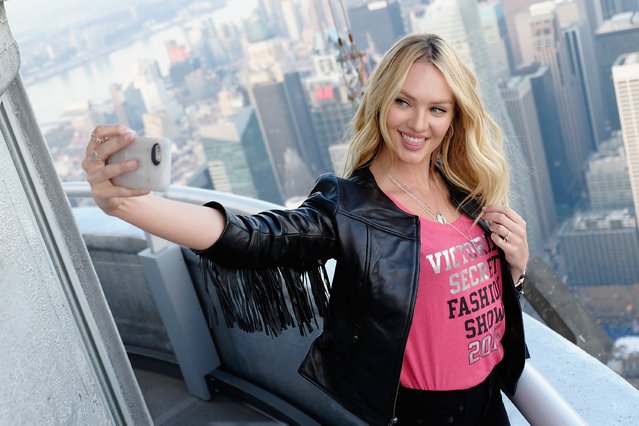