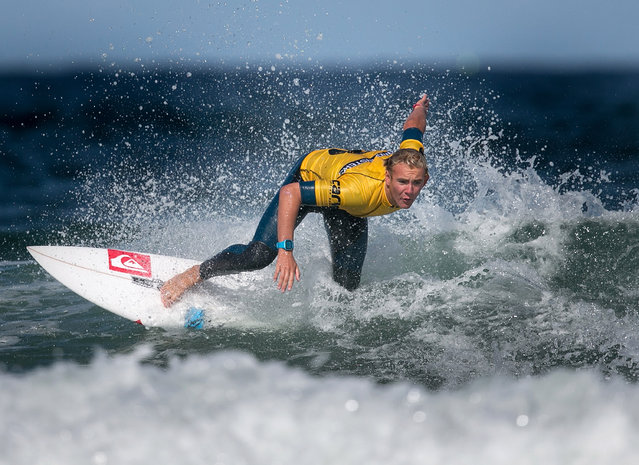 Connor Griffiths from Swansea competes in a heat of the UK Pro Surf Association's Men's Open on Fistral Beach on the second day of the Boardmasters surf and music festival in Newquay on August 7, 2014 in Cornwall, England. Since 1981, Newquay has been playing host to the Boardmasters surfing competition – which is part of a larger five-day surf, skate and music festival and has become a integral part of the continually popular British surf scene growing from humble beginnings, to one of the biggest events on the British surfing calendar. It now attracts professional surfers from across the globe to compete on the Cornish beach that is seen by many as the birthplace of modern British surfing. (Photo by Matt Cardy/Getty Images) 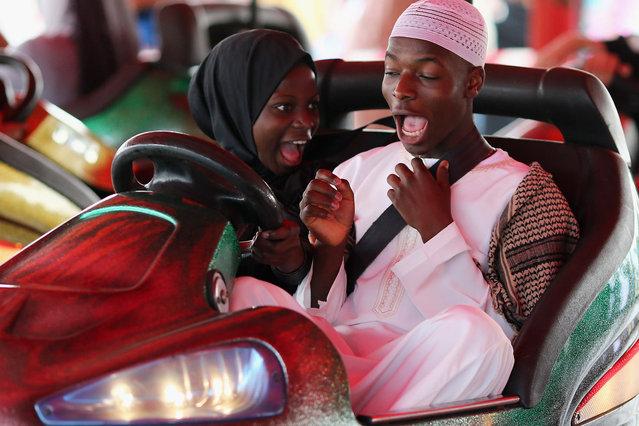 People ride on Bumper cars during an Eid celebration in Burgess Park on July 28, 2014 in London, England. The Muslim holiday Eid marks the end of 30 days of dawn-to-sunset fasting during the holy month of Ramadan. (Photo by Dan Kitwood/Getty Images) 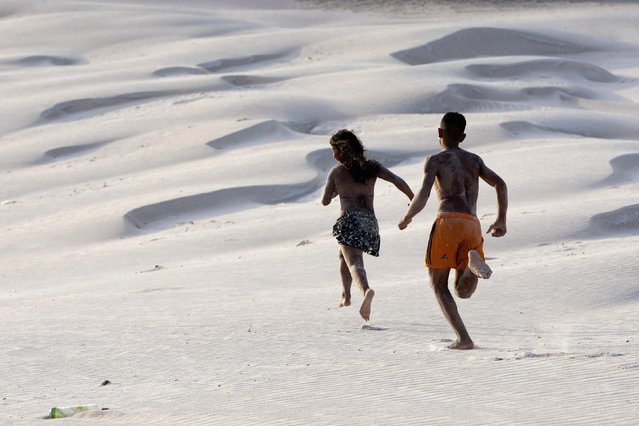 Youths run along sand dunes during the peak of the summer vacation season on Atalaia beach in Salinopolis, Para state, July 27, 2014. Salinopolis, with a population of 40,000, receives an estimated 280,000 visitors during the month of July, mostly to enjoy the beaches located just southeast of the Amazon river's mouth where the river's fresh water mixes with the Atlantic Ocean's salt water, tourism officials said. Officials estimate that close to 50,000 vehicles drive onto the city's two most popular beaches, Atalaia and Farol Velho, with tons of garbage left by visitors. (Photo by Paulo Santos/Reuters) 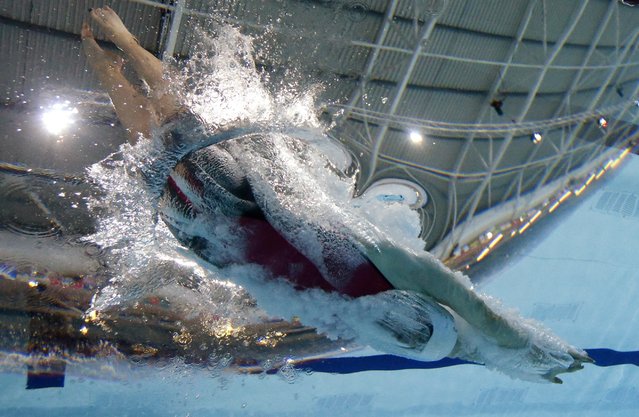 Sycerika McMahon of Northern Ireland is seen underwater as she takes the start for the women's 400m Freestyle heats during the 2014 Commonwealth Games in Glasgow, Scotland, July 29, 2014. (Photo by Stefan Wermuth/Reuters) 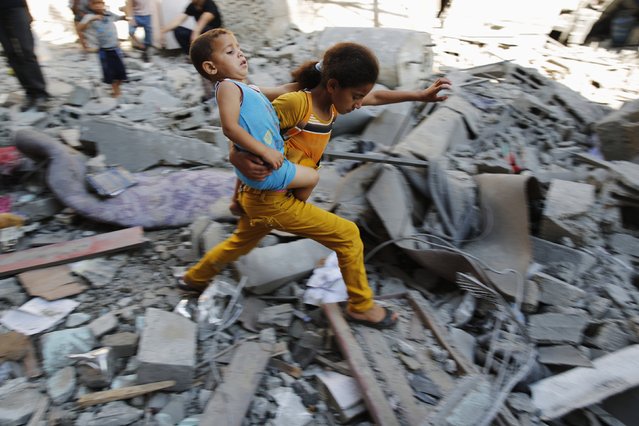 A Palestinian girl carries a child across rubble from a building that police said was destroyed by an Israeli air strike, in the Burij refugee camp in the central Gaza Strip August 1, 2014. Israeli shelling near the southern Gaza town of Rafah killed at least 40 people on Friday, the local hospital said, as a ceasefire that went into effect only hours earlier crumbled. Israel accused Hamas and other Palestinian militant groups of violating the U.S.- and U.N.-mediated truce, but did not elaborate, amid Israeli media reports that gunmen had fired at Israeli soldiers in the Rafah area. (Photo by Finbarr O'Reilly/Reuters) 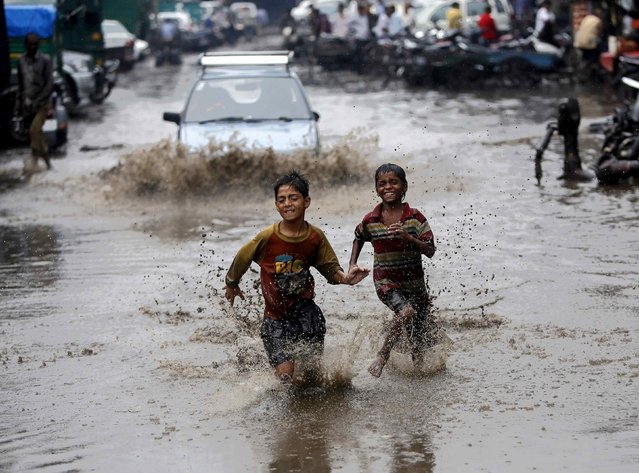 Boys run through a water logged street after heavy monsoon rains in New Delhi August 2, 2014. India's monsoon rains were nine percent below average in the week that ended July 30, the weather office said on Thursday, reflecting a patchy phase after the previous week's surplus downpours. (Photo by Anindito Mukherjee/Reuters) 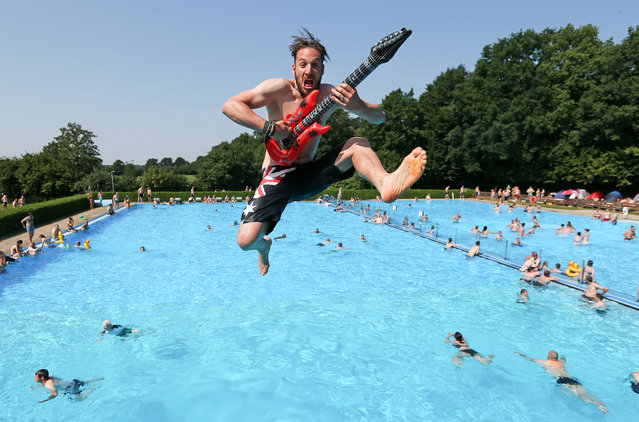 Benni, 33, from Dortmund jumps from the three-meter tower into the pool with an inflatable guitar in the swimming pool in Wacken, Germany, August 1, 2014. About 75,000 visitors are expected to attend the heavy metal festival which runs from July 31 to August 2. (Photo by Axel Heimken/EPA) 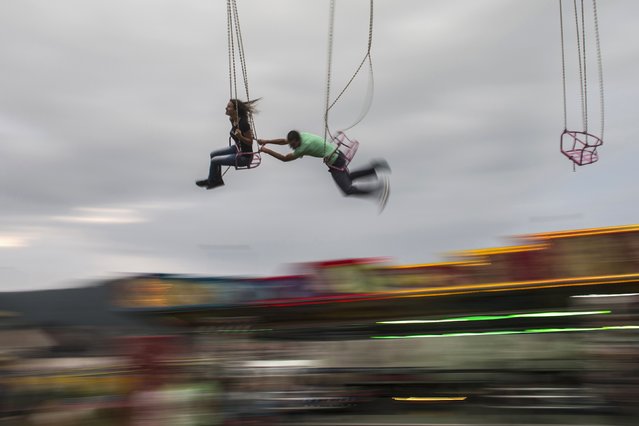 Revellers ride during the 54th annual brass band festival in the Serbian village of Guca August 7, 2014. Every year Guca is swamped by thousands of people taking part in the celebration of brass band music. (Photo by Marko Djurica/Reuters) 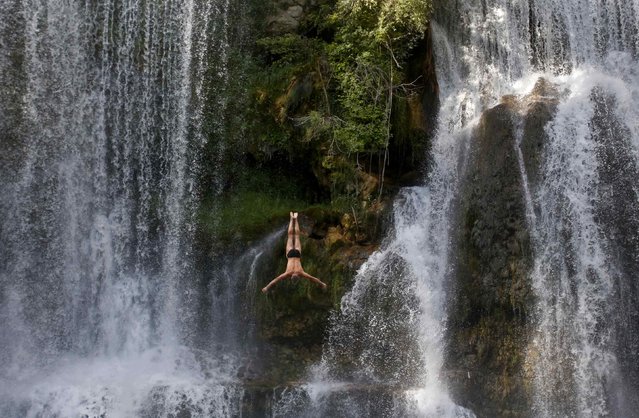 A competitor takes part in the first international waterfall jumping competition held in the old town of Jajce August 9, 2014. (Photo by Dado Ruvic/Reuters) 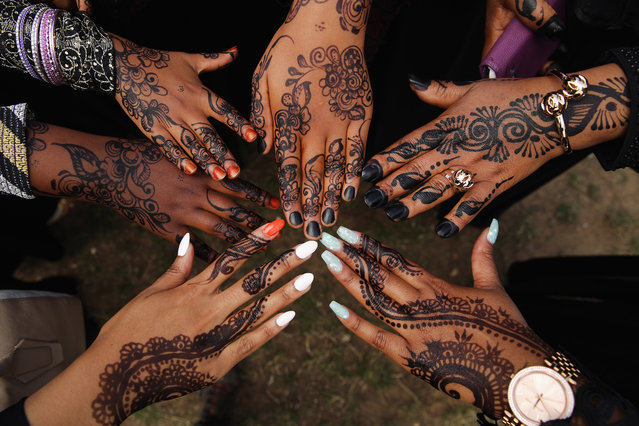 Girls show off their Henna tattoos during an Eid celebration in Burgess Park on July 28, 2014 in London, England. The Muslim holiday Eid marks the end of 30 days of dawn-to-sunset fasting during the holy month of Ramadan. (Photo by Dan Kitwood/Getty Images) 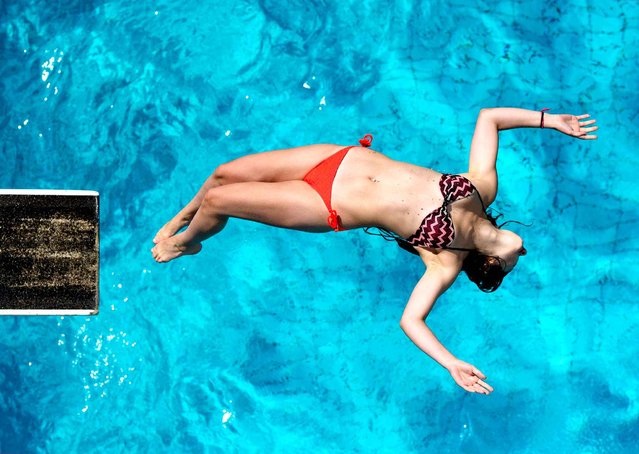 A girl jumps in to a swimming pool from a diving board as the sun shines in Berlin on July 31, 2014. (Photo by Daniel Bockwoldt/AFP Photo/DPA) 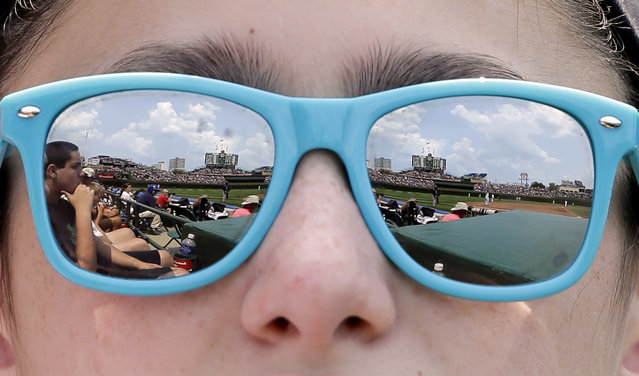 A baseball fan watches a baseball game between the Colorado Rockies and the Chicago Cubs during the fourth inning in Chicago, Thursday, July 31, 2014. (Photo by Nam Y. Huh/AP Photo) A woman poses with a scaled down model of the new “Godzilla”, at Tokyo Midtown in Tokyo, Thursday, July 31, 2014. (Photo by Shizuo Kambayashi/AP Photo) 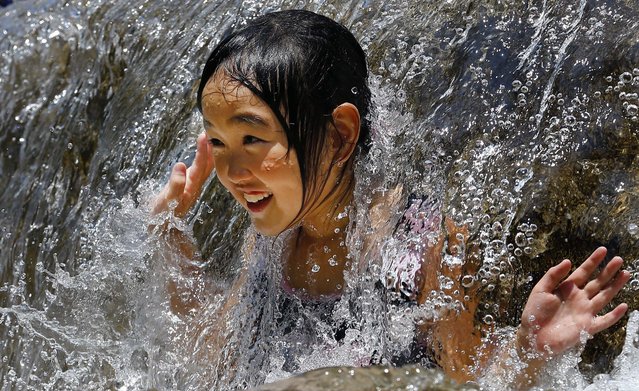