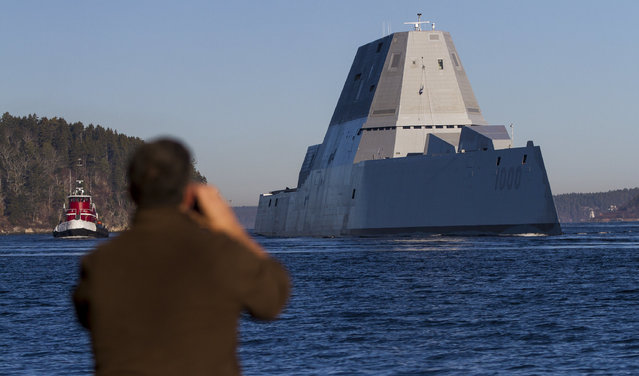 The U.S. Navy's newest destroyer, Zumwalt, sails down the Kennebec River toward the Atlantic for a series of sea trials after leaving Bath Iron Works on December 7, 2015. (Photo by Ben McCanna/Portland Press Herald via Getty Images) 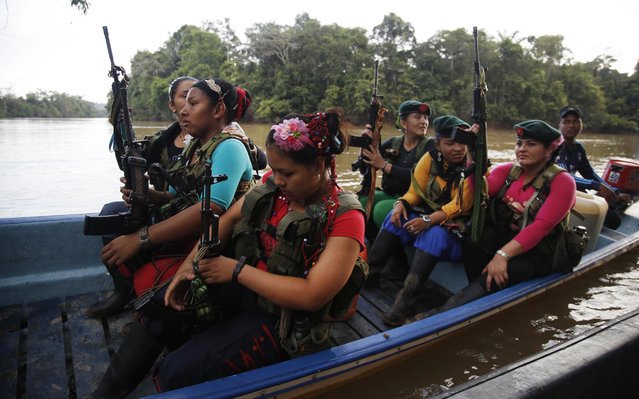 Rebels soldiers of the 48th Front of the Revolutionary Armed Forces of Colombia, or FARC, board a boat to travel to a local intramural soccer tournament, in the southern jungles of Putumayo, Colombia, Friday, August 12, 2016. The “FARC Olympics”, coinciding with the Rio Games, began early in the morning as dozens of guerrillas made their way by motorized longboat through the jungle waterways to the camp of the 49th front. (Photo by Fernando Vergara/AP Photo) The Syrian area of Quneitra is seen in the background as an out-of-commission Israeli tank parks on a hill, near the ceasefire line between Israel and Syria, in the Israeli-occupied Golan Heights, August 21, 2015. (Photo by Baz Ratner/Reuters) 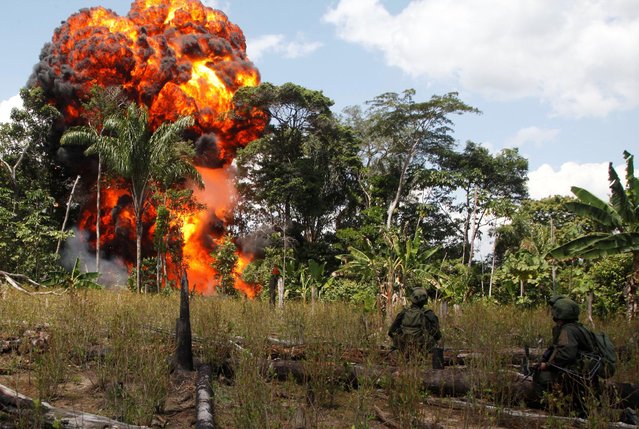 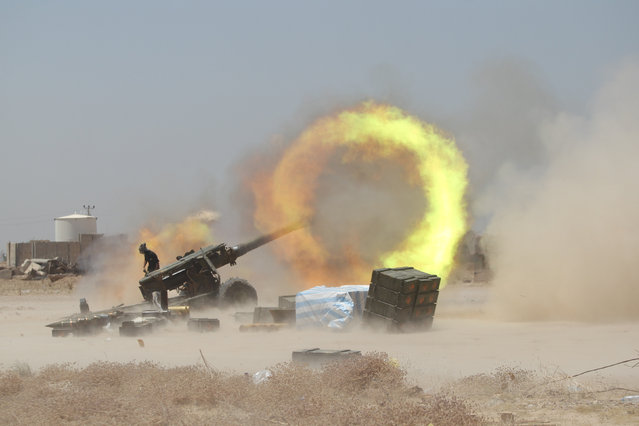 An Iraqi Shi'ite fighter fires artillery during clashes with Islamic State militants near Falluja, Iraq, May 29, 2016. (Photo by Reuters/Stringer) 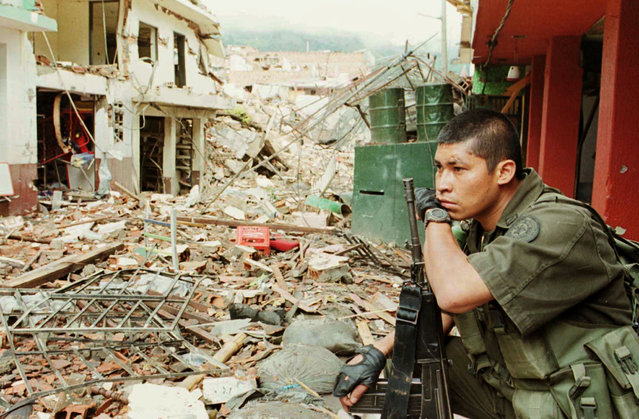 A Colombian policeman rests on his Galil rifle after a combat against rebels of the FARC in Granada city, Antioquia province, December 7, 2000. (Photo by Reuters/Stringer) 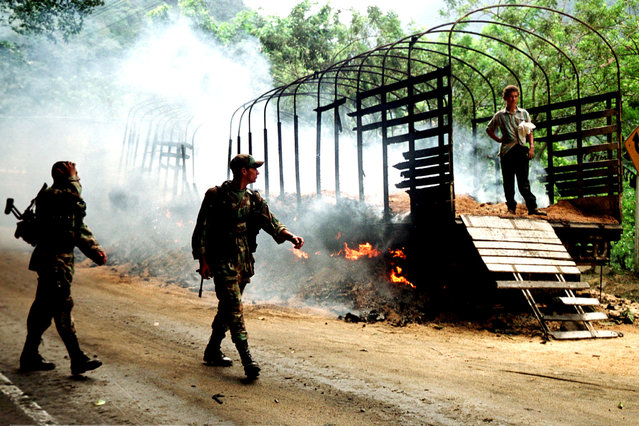 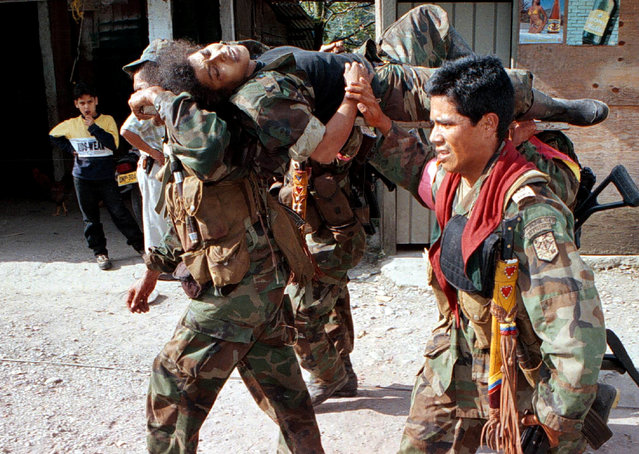 Colombian soldiers carry a guerrilla injured in combat during an attack in Guayabetal Meta province, 60 km southeast of Bogota, January 15, 2000. (Photo by Reuters/Stringer) Marxist FARC rebels march through a guerrilla camp deep in the jungles of southern Colombia, June 22, 2001. (Photo by Reuters/Stringer) 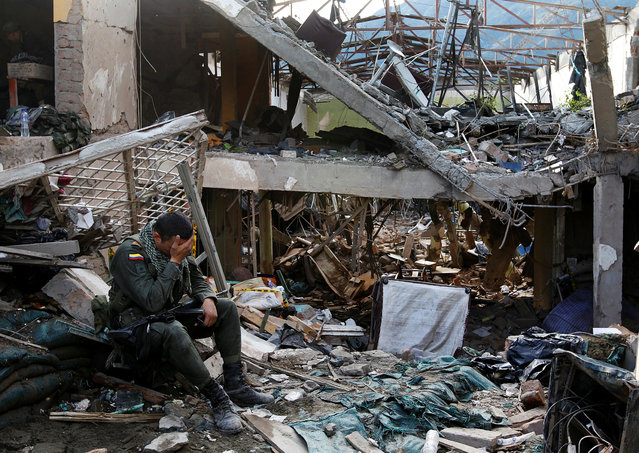 A police officer reacts amid the ruins of a police station which was destroyed by a bomb attack in the municipality of Inza in Cauca province December 7, 2013. (Photo by Jaime Saldarriaga/Reuters) A Colombian soldier is carried by a Black Hawk helicopter in Puerto Siare, August 22, 2001. (Photo by Jose Gomez/Reuters) 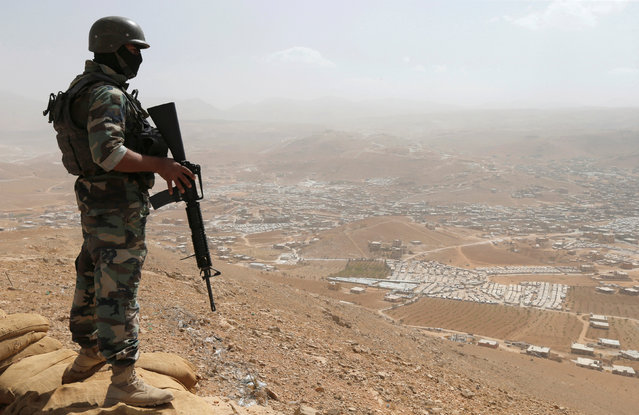 A Lebanese soldier carries his weapon as he stands on sandbags at an army post in the hills above the Lebanese town of Arsal, near the border with Syria, Lebanon September 21, 2016. (Photo by Mohamed Azakir/Reuters) 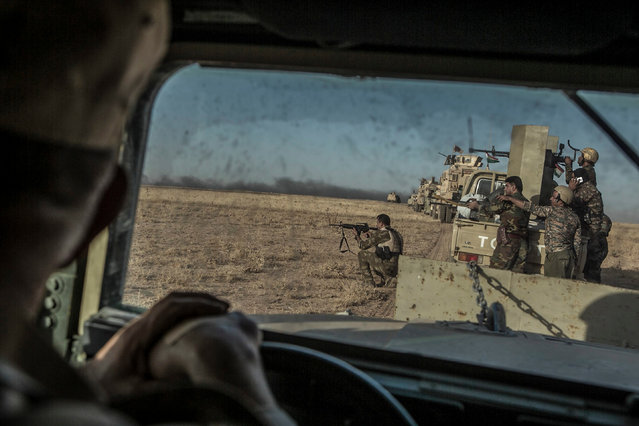 Peshmerga forces shoot as they take part in an operation to liberate several villages currently under the control of the Islamic State southeast of Mosul, north Iraq, 14 August 2016. The operation aims to recapture 11 villages, according to sources thus far six were successfully retaken with the help of US-led air support. The liberation of the villages from Islamic State forces serves as a buffer zone to protect Kurdish held-cities from IS attacks and is a stepping stone to eventually recapture the city of Mosul itself. (Photo by Andrea Dicenzo/EPA) In this Saturday, August 13, 2016 file photo, soldiers from the 1st Battalion of the Iraqi Special Operations Forces are stacked against a building during a training exercise to prepare for the operation to re-take Mosul from Islamic State militants, in Baghdad, Iraq. The disparate groups that make up Iraq's security forces are converging on the city of Mosul, lining up for a battle on the historic plains of northern Iraq that is likely to be decisive in the war against the Islamic State group. (Photo by Maya Alleruzzo/AP Photo) 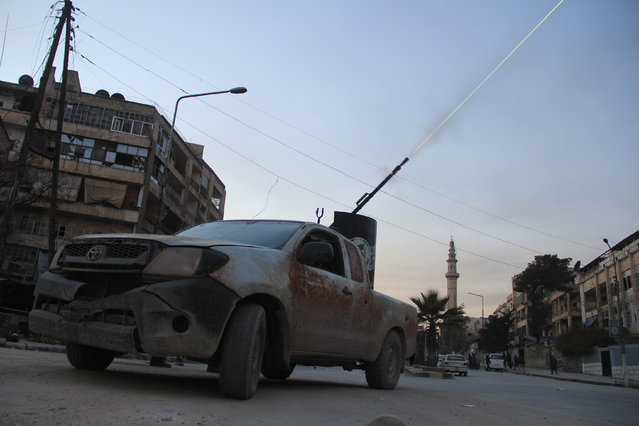 This selfie provided to AFP on August 18, 2016 shows “Mike” aka Peshmerganor, a Norwegian former soldier who is volunteering to help peshmerga forces fight the Islamic State group north of Mosul in and around Telskuf, Iraq. “Mike” requested anonymity for security reasons. Increasing numbers of Westerners – many of them military veterans – appear to be trying to join the fight against the Islamic State group in Iraq before it's too late, front-line volunteer warriors say. (Photo by AFP Photo/Stringer) 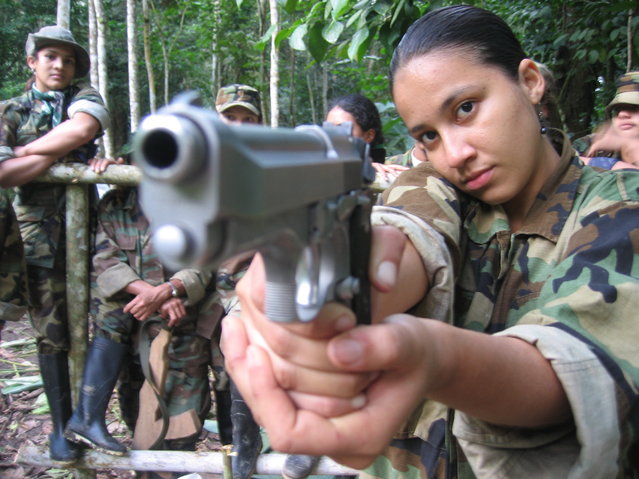 A member of the Revolutionary Armed Forces of Colombia (FARC) pose for a picture at a camp in the Colombian mountains on February 2005. (Photo by Frank Piasecki Poulsen) Clashes between the Free Syrian Army and the regime Army in the eastern outskirts of Aleppo, Syria on August 16, 2016. (Photo by Louai Barakat/Imageslive/ZUMA Press/Splash News) 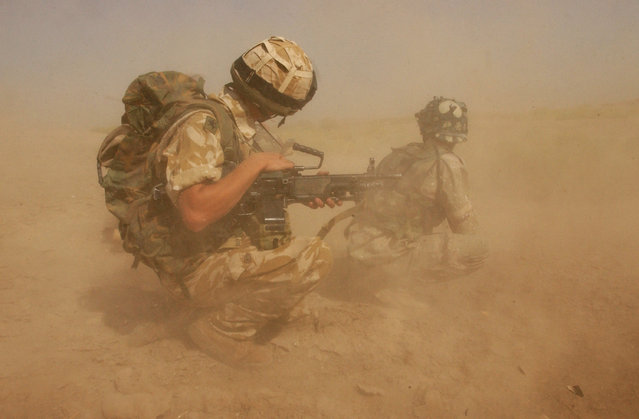 British Army soldiers, from the Royal Welch Fusiliers Regiment and Iraqi National Guards, take defensive positions on September 26, 2004 in Al Amarah, 180 km (112 mi) north of Basrah in southern Iraq, after having disembarked from a Chinox Helicopter during their first joint Eagle Airborne Vehicle Check Point Patrol. The capital of Maysan Province, Al Amarah, was a deprived area of Iraq under Saddam Hussein, as it was inhabited by both Shia Muslims and Marsh Arabs and resistant to any form of central control. (Photo by Marco Di Lauro/Getty Images)
Edit Del
29 Sep 2016 08:51:00, post received 0 comments
Publication archive:
←   →
Popular tags:
All tags
Last searches: