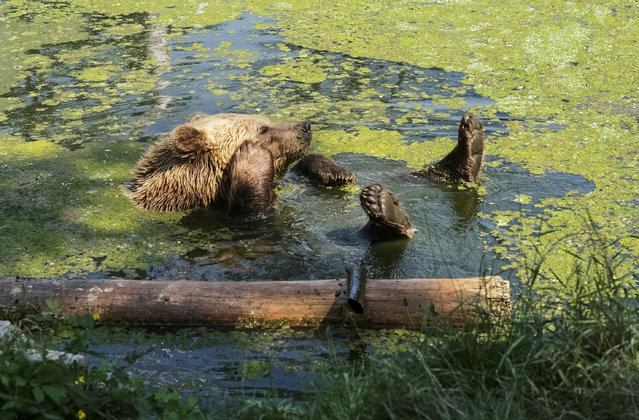 A brown bear is seen in a shelter for bears in the village of Berezivka near Zhytomyr, Ukraine August 15, 2017. Five bears, which suffered bad treatment were rescued from circuses and private zoos and restaurants, live in the bear rescue centre, opened in 2012 by international animal charity Four Paws. (Photo by Gleb Garanich/Reuters) 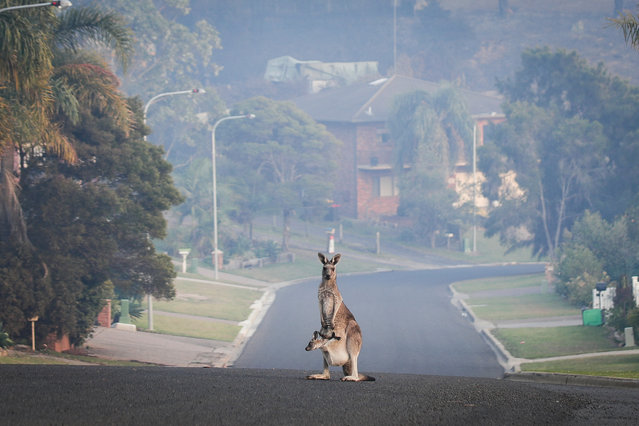 A kangaroo on an empty street in Tathra following a bushfire on the New South Wales coast, Tathra, Australia on March 19, 2018. (Photo by Fairfax Media) 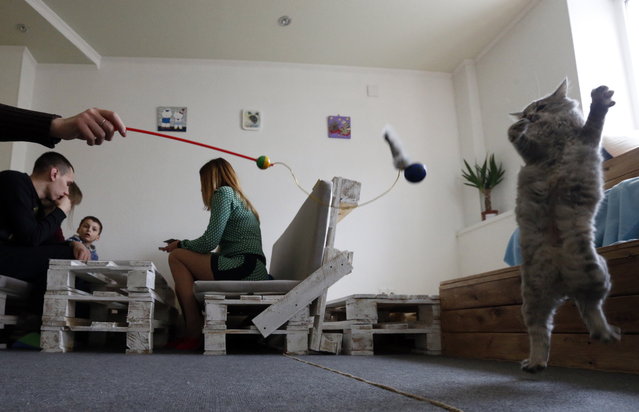 A visitor playing with a cat at a cat cafe called Lapy a Khvost (Paws and Tail). The cafe will serve as a shelter for stray cats and help children with autism through cat therapy in Rostov-On-Don, Russia on January 2, 2016. (Photo by Valery Matytsin/TASS) 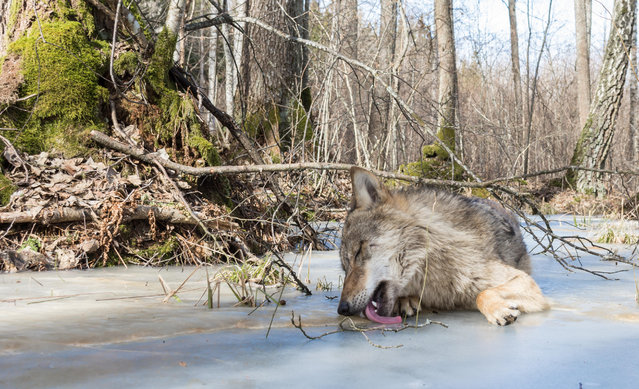 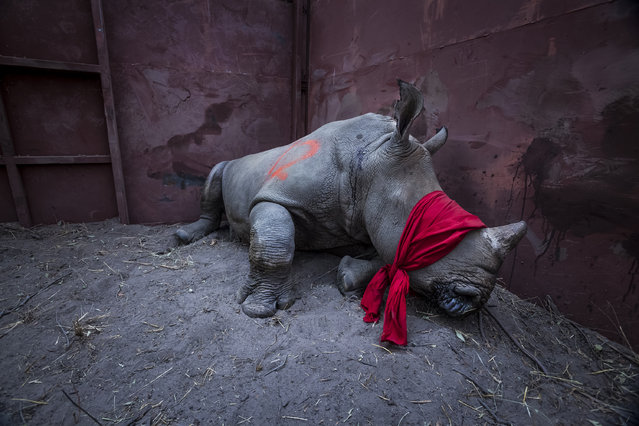 A blindfolded white rhino awaits release into the wild in Botswana after being transported from South Africa. (Photo by Neil Aldridge) 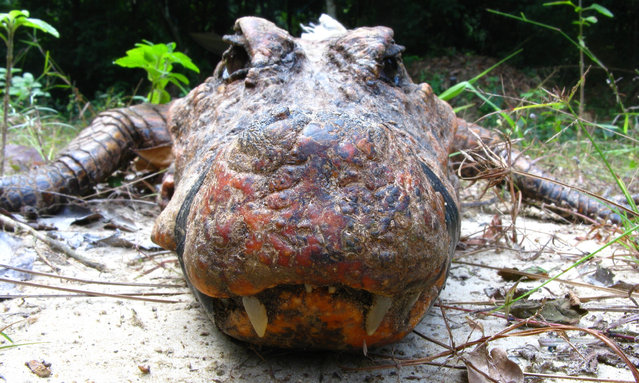 A cave crocodile showing off his orange-red face, by the Abanda Caves in Gabon. Scientists think these weird cave-dwelling crocodilians may be in the process of evolving into a new species. (Photo by Olivier Testa) 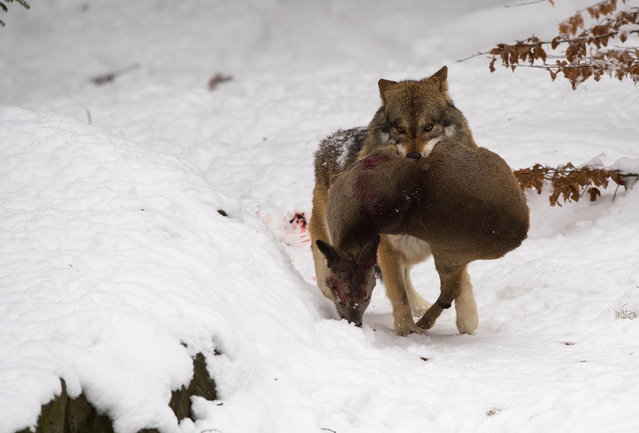 Farmers in north-east Flanders have been put on high alert as Belgium record it first wolf on its soil for at least 100 years A wolf carries its prey in its mouth in Bavaria, Germany. (Photo by Jegen/Mc Photo/Alamy Stock Photo) 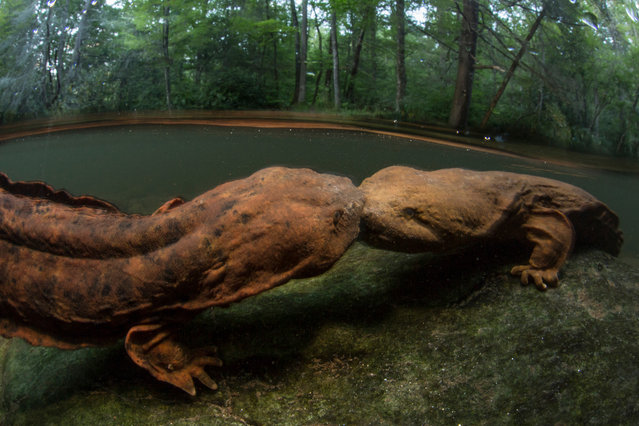 A Tasmanian Devil looks on at the Save The Tasmanian Devil Program (STTDP) Intensive Management Facility in Cressy, Tasmania, Australia, 11 April 2017. The facility is the largest captive breeding facility of the Devil and houses between 30 to 100 of the endangered Tasmanian Devils, the world's largest marsupial carnivore, found only in Tasmania. Disease free, gentically diverse populations of Devils have been bred in five bio-secure sites with some released back into the wild to rebuild wild populations and continue research after the spread of a nearly 100 percent fatal contagious cancer called Devil Facial Tumor Disease (DFTD) that has reduced overall Devil numbers by 80 percent. The STTDP’s program focuses on rebuilding wild populations, establishing devil recovery zones, population monitoring, field research and research and development of immunization techniques. (Photo by Barbara Walton/EPA) 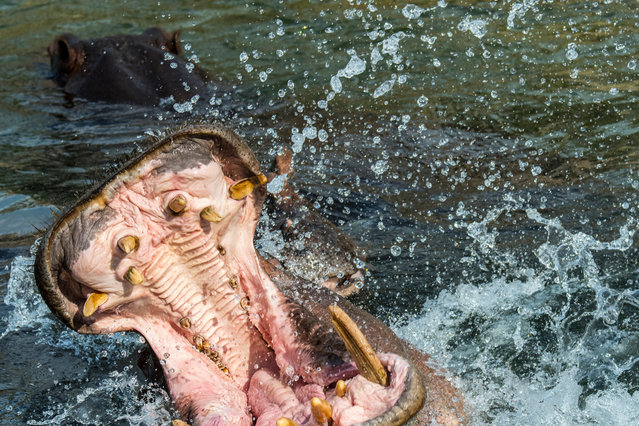 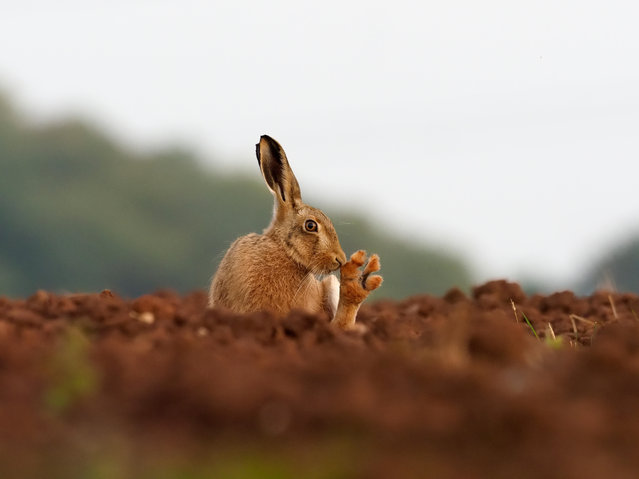 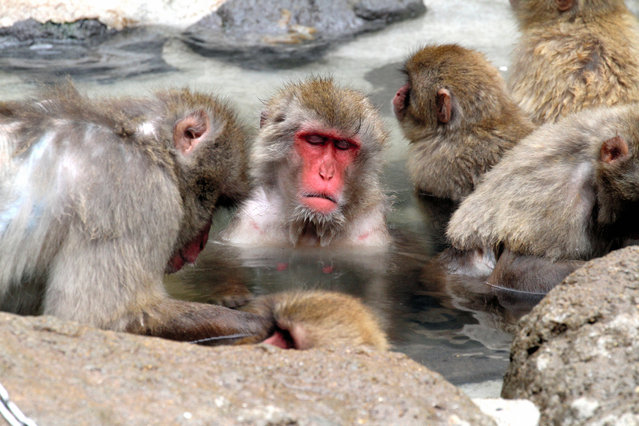 Japanese macaques enjoy an outdoor bath at the Fukuoka municipal zoo and botanical garden in Fukuoka, Japan on February 13, 2018. (Photo by The Asahi Shimbun) 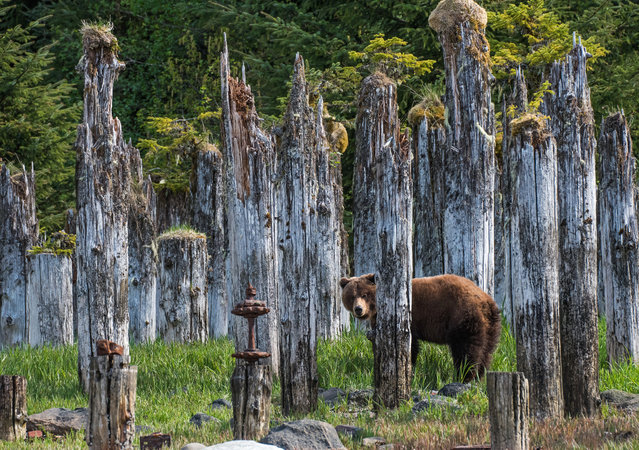 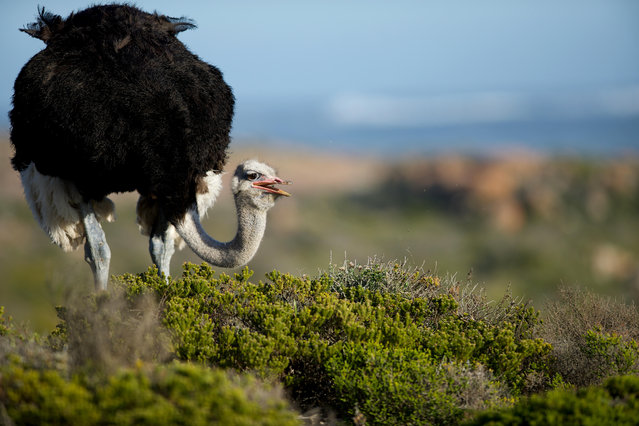 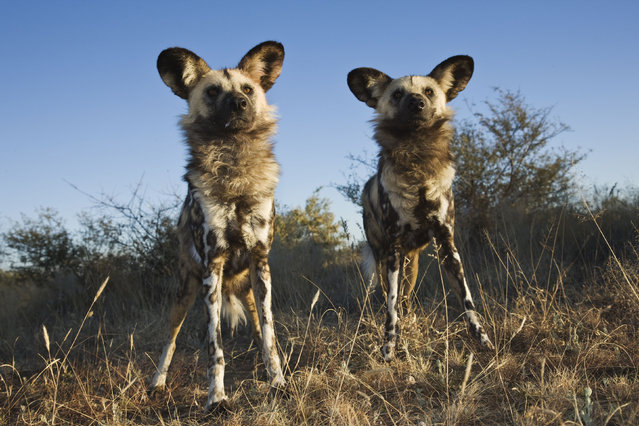 African wild dogs. Half the plant and animals in the world’s most nature-rich areas are at risk of dying out if greenhouse gas emissions rise unchecked, wildlife experts have warned. (Photo by Martin Harvey/WWF/PA Wire) 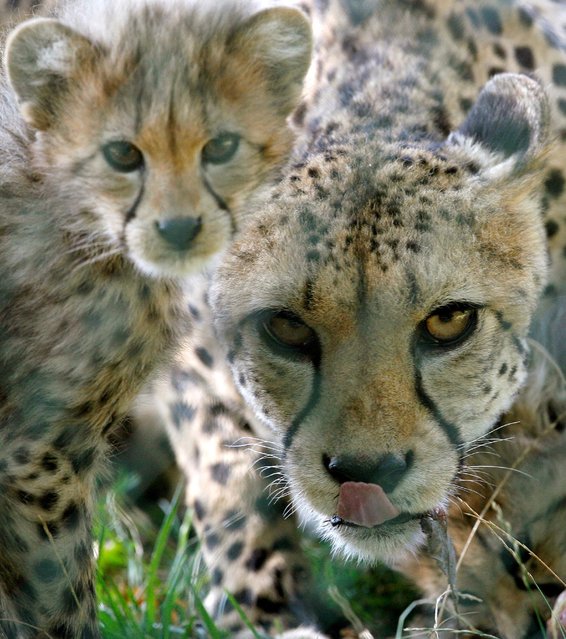 Ten-year-old cheetah Msichana stands beside one of its three cubs at an enclosure at the zoo in Basel September 9, 2009. (Photo by Arnd Wiegmann/Reuters) 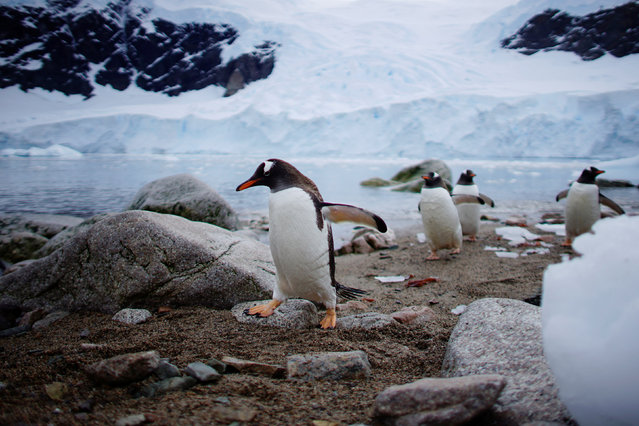 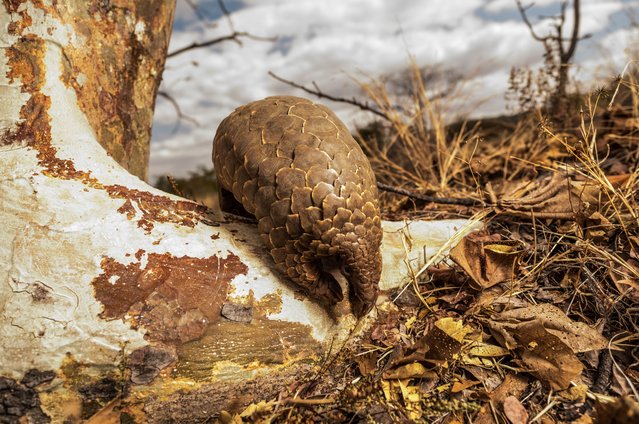 A ground pangolin in Zimbabwe, taken as part of a series on members of the Tikki Hywood Trust, who dedicate their lives to the most trafficked mammal in the world. The charity workers are assigned one pangolin each, and spend 24 hours a day rehabilitating and walking the endangered mammals so that they can forage naturally. (Photo by Adrian Steirn/Barcroft Images) 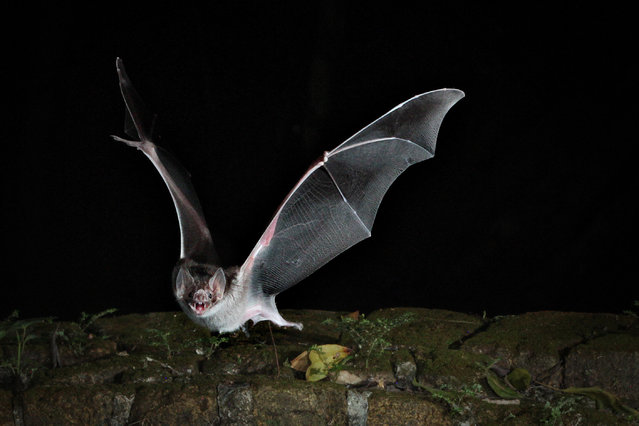 This photo provided by Andrea Rummel, Brown University, shows a bat. A three-ounce flying robot mimics the unique and more flexible way bats fly, this new robot prototype can do a better and safer job getting into disaster sites and scoping out construction zones than those bulky drones with spinning rotors, said the three authors of a study released Wednesday, February 1, 2017, in the journal Science Robotics. (Photo by Andrea Rummel/Brown University via AP Photo) 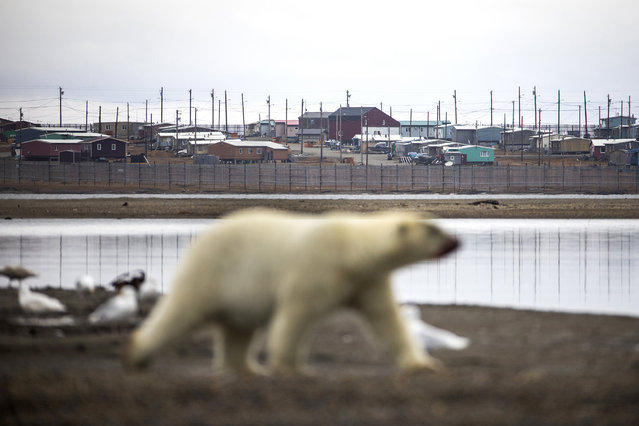