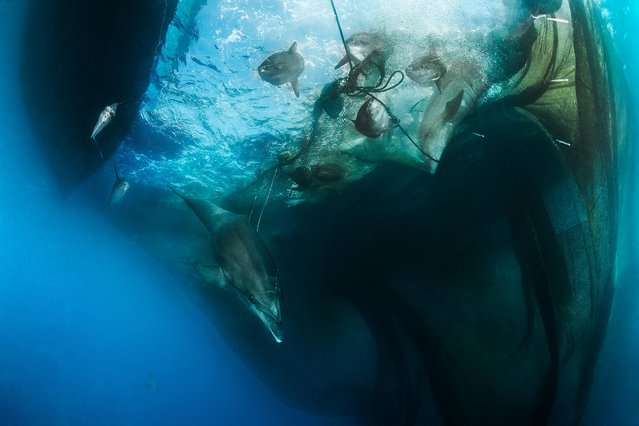 A dolphin is caught in a net, taken in Camogli, Italy, July 2016. Two dolphins had a lucky escape after getting caught in a traditional fishing net. The moment was photographed in the Ligurian Sea between Camogli and Punta Chiappa by underwater photojournalist, Isabella Maffei. The traditional fishing method is called “tonnarella”, and uses a variety of chambers to disorientate and trap the fish. The method is accepted in protected areas as it doesn't damage the environment and selectively catches fish. (Photo by Isabella Maffei/Barcroft Images) 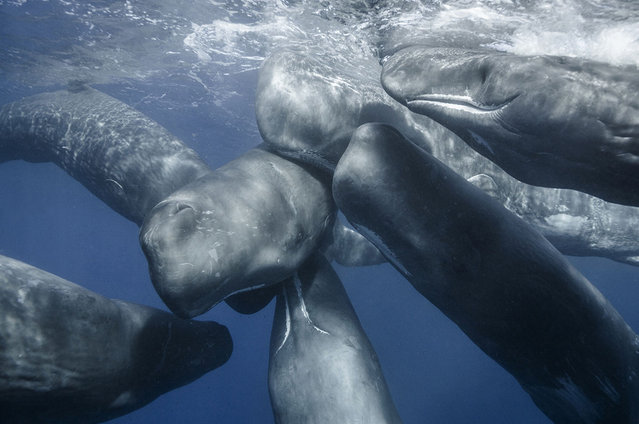 Group of sperm whales in the Atlantic Ocean near the Azores islands off of Portugal, September 2016. (Photo by Mike Korostelev/Rex Features/Shutterstock) 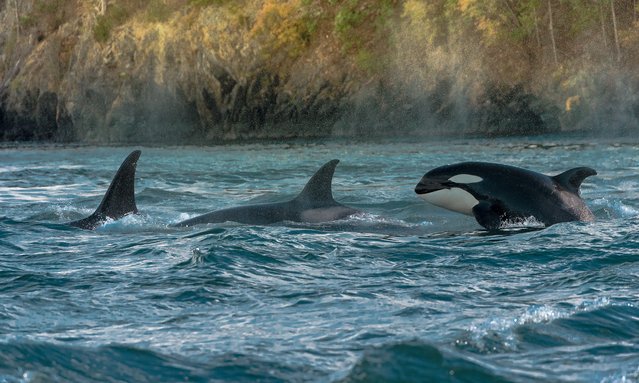 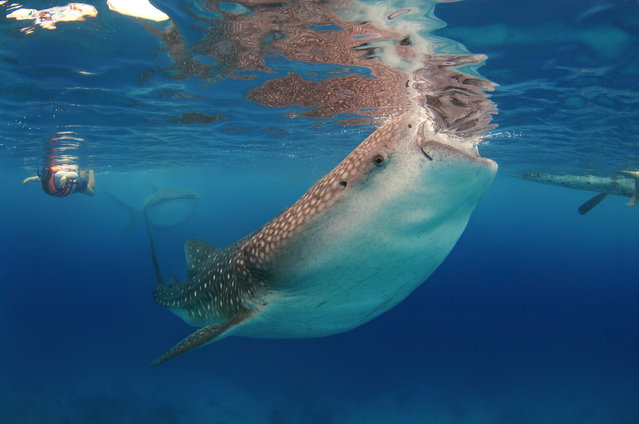 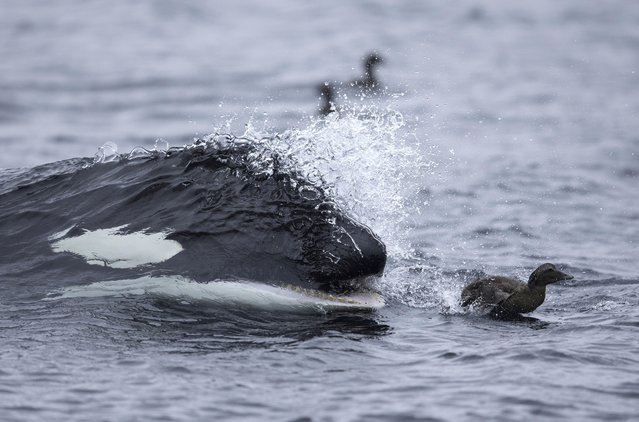 Wildlife photographer Guy Edwardes snapped the pod of orcas as they hunted eider ducks off north-east coast of Scotland. For many unlucky birds known as Eiders, the looming black fin and gaping jaws of the killer whales were the last things they would see. The waters surrounding the Scottish islands are one of best places in Britain to catch a glimpse of orcas. Killer whales hunt in packs and can grow up to 32ft long and weight as ten tons. (Photo by Guy Edwardes) 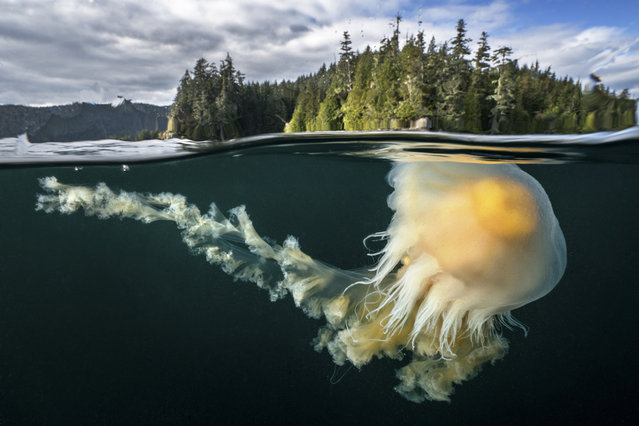 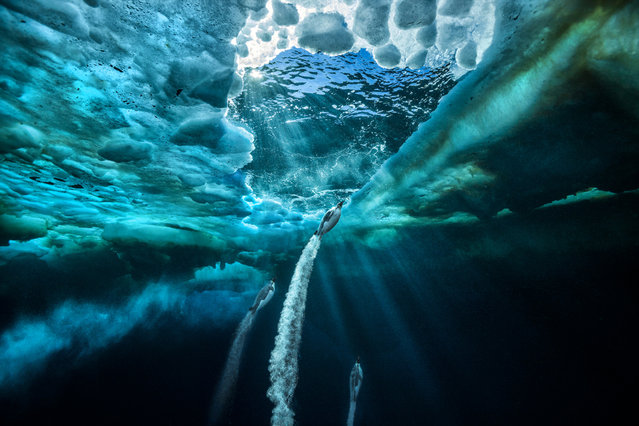 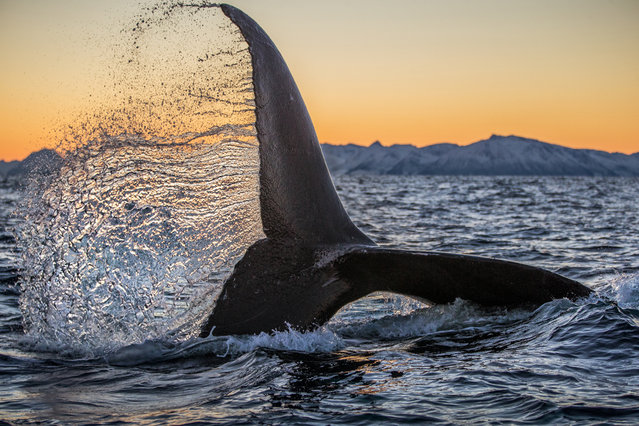 And Fjord, near Andenes, Norway, 2014. Orcas carousel feeding on herring with other species of whales. (Photo by Paul Nicklen) 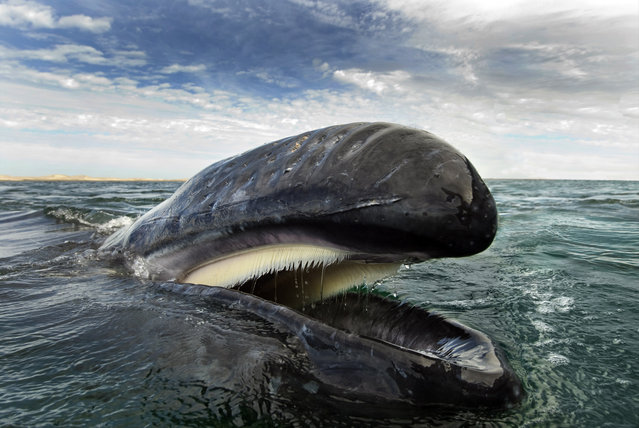 Gray whale feeding at the surface and showing it's baleen. (Photo by Christopher Swann/Biosphoto) 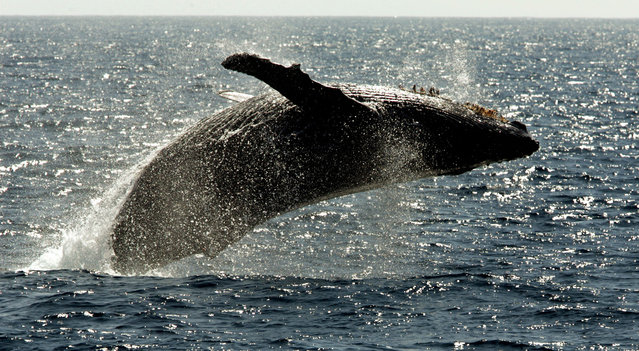 In this January 23, 2005 file photo, a humpback whale leaps out of the water in the channel off the town of Lahaina on the island of Maui in Hawaii. (Photo by Reed Saxon/AP Photo) 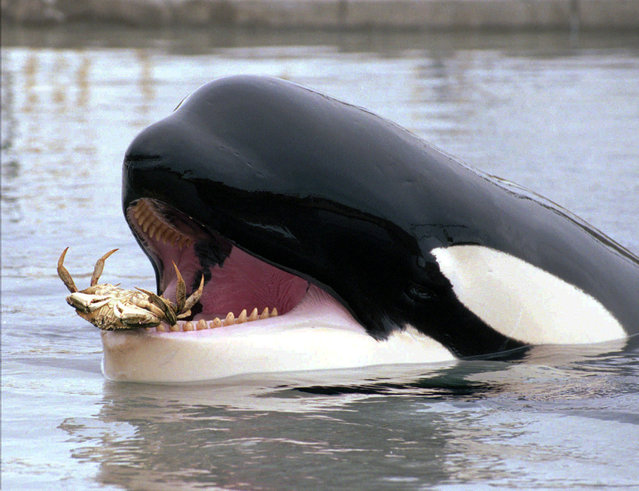 Keiko, the famous killer whale, carries a live crab in his mouth while cavorting in his pool at Oregon Coast Aquarium in Newport, Ore., Tuesday, June 9, 1998. The Icelandic government stated Tuesday, that Keiko is welcome in their coastal waters and the Free Willy-Keiko Foundation is scouting locations for Keiko's floating pen. Keiko was playing with the crab, picking it up twice and spitting it out in shallow water. (Photo by Don Ryan/AP Photo) 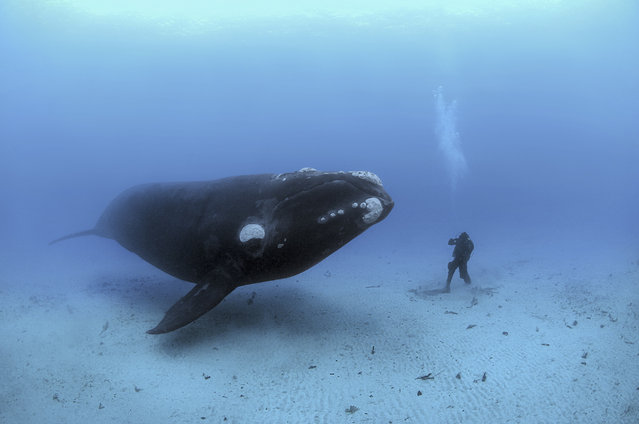 This popular image of a 45-foot, 70-ton right whale swimming beside a diver on the sea floor in the Auckland Islands has been published not only in the National Geographic magazine, but in several of our publications, including our commemorative “Around the World in 125 Years” book. (Photo by Brian Skerry) 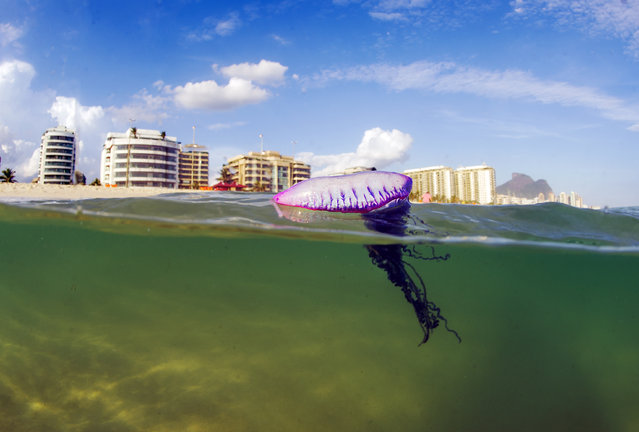 Thirty-five-year-old Daniel Botelho travels all over the world to photograph the wildlife of the sea, but found this man-of-war in the South Atlantic Ocean just outside his home in Rio de Janeiro, Brazil on July 31, 2016. The Atlantic Portuguese man o' war (Physalia physalis), also known as the man-of-war, blue bottle, or floating terror, is a marine hydrozoan of the family Physaliidae found in the Atlantic Ocean, as well as the Indian and Pacific Oceans. Its venomous tentacles can deliver a painful (and sometimes fatal) sting. Despite its outward appearance, the Portuguese man o' war is not a jellyfish but a siphonophore, which, unlike jellyfish, is not actually a single multicellular organism, but a colonial organism made up of specialised individual animals called zooids or polyps. These zooids are attached to one another and physiologically integrated to the extent that they are unable to survive independently, and therefore have to function as if they were a so-called individual animal. (Photo by Daniel Botelho/Barcroft Images)
Edit Del
11 Jun 2017 07:23:00, post received 0 comments
Publication archive:
←   →
Popular tags:
All tags
Last searches: