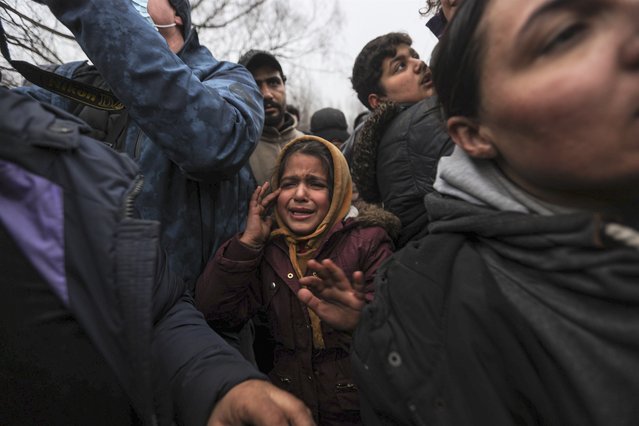 Migrants gather to get humanitarian aid spread by Belarusian militaries at the camp at the Belarus-Polish border in the Grodno region, not far from the checkpoint Bruzgi, Belarus, 11 November 2021. Hundreds of refugees who want to obtain asylum in the European Union have been trapped at low temperatures for three days at the border. (Photo by EPA/EFE/Stringer) 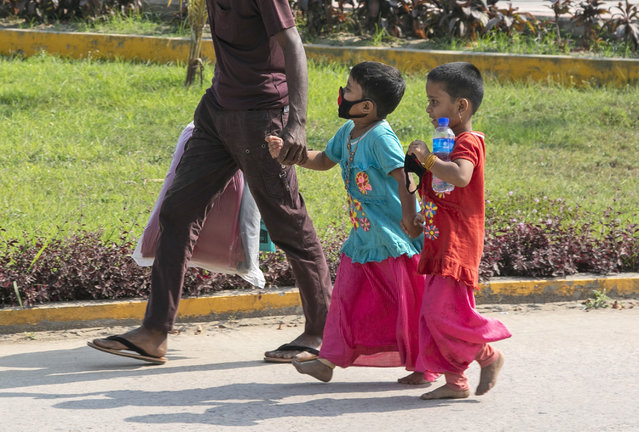 Rohingya refugee children arrive with an adult to board a naval vessel that will take them to Bhasan Char island, in Chittagong, Bangladesh, Thursday, November 25, 2021. Thousands have been relocated on the island in the Bay of Bengal from crammed camps near the Myanmar border. (Photo by AP Photo/Stringer) 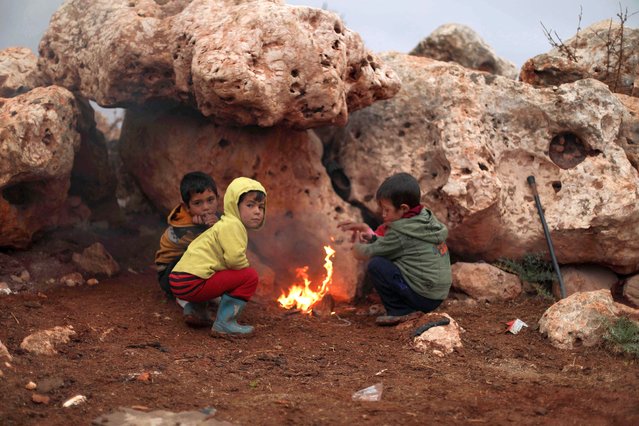 Children on November 20, 2021, gather in front of a camp fire, in the Bardaqli camp for displaced people in the town of Dana in Syria's northwestern Idlib province, as winter approaches on the International Day of Children's Rights. (Photo by Aaref Watad/AFP Photo) 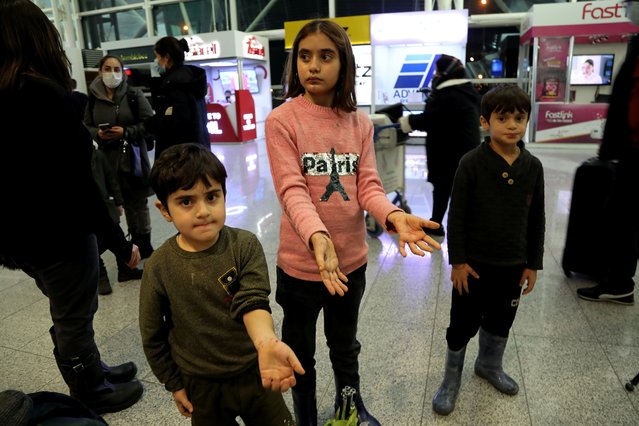 Children of the Iraqi immigrant show hands with wounds and infections to the members of the media as they arrive to the airport in Irbil, Iraq, early Friday, November 26, 2021. A second batch of Iraqis have returned home in repatriation flights  after a failed bid to enter the Europe. Over 170 people returned on a flight that landed in Irbil airport in the northern Kurdish-run region Friday morning. (Photo by Hussein Ibrahim/AP Photo) 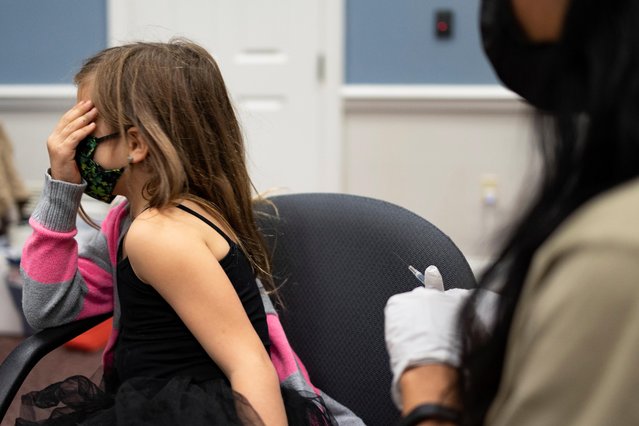 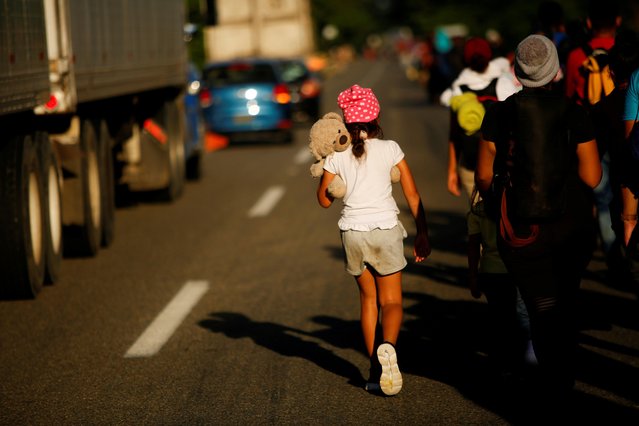 A migrant girl from Venezuela carries her Teddy bear as she joins a caravan heading to the U.S. border, in Huixtla, November 20, 2021. (Photo by Jose Luis Gonzalez/Reuters) 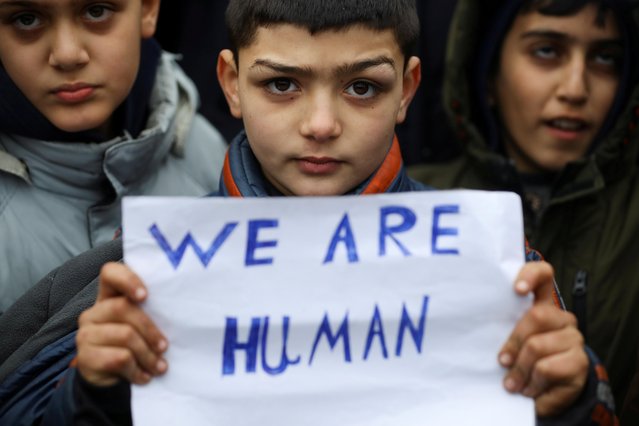 Migrant children hold a sign during a protest outside the transport and logistics centre Bruzgi on the Belarusian-Polish border, in the Grodno region, Belarus on November 25, 2021. (Photo by Kacper Pempel/Reuters) 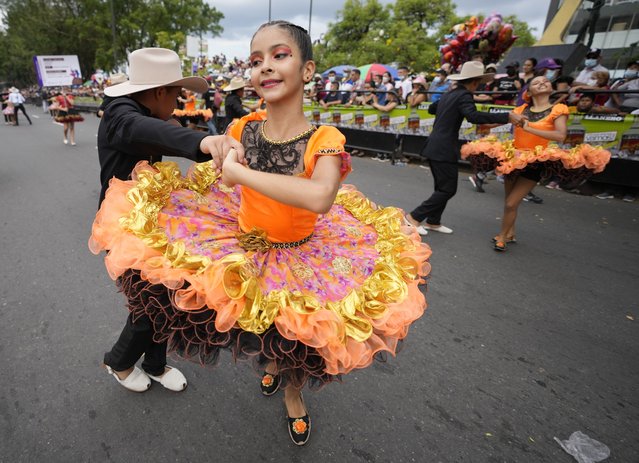 Children dance during the International Tournament of Joropo in Villavicencio, Colombia, Saturday, November 13, 2021. Joropo is the traditional music and dance of the Eastern Plains of Colombia and Venezuela. (Photo by Fernando Vergara/AP Photo) A girl receives her first coronavirus disease (COVID-19) vaccination after the country approved vaccinations for children aged 5-11, in Jerusalem on November 23, 2021. (Photo by Ammar Awad/Reuters) 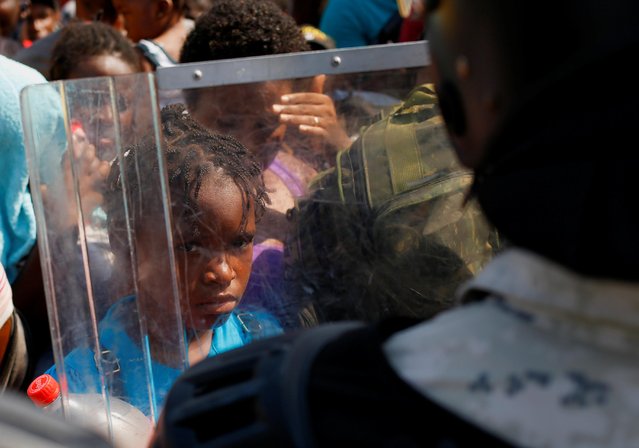 A migrant child is seen through a National Guard member's shield as he and others queue to get on buses after accepting an offer from the Mexican government to obtain humanitarian visas to transit the Mexican territory, at a stadium in Tapachula, Mexico on November 25, 2021. (Photo by Jose Luis Gonzalez/Reuters) A young girl tries to touch a sheep as they pass through the city center for the annual Transhumance Festival on October 24, 2021 in Madrid, Spain. The Transhumance Festival returns to the streets of Madrid, a traditional event with thousands of sheep filling the main roads of the Spanish capital. Since 1994, this event claims the role of transhumance and extensive livestock farming as a tool for conserving biodiversity and fighting climate change. (Photo by Marcos del Mazo/Getty Images) 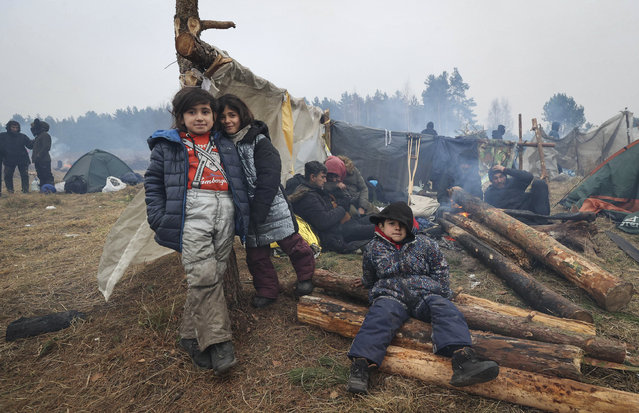 Migrants aiming to cross into Poland camp near the Bruzgi-Kuznica border crossing on the Belarusian-Polish border on November 17, 2021. (Photo by Maxim Guchek/BELTA via AFP Photo) 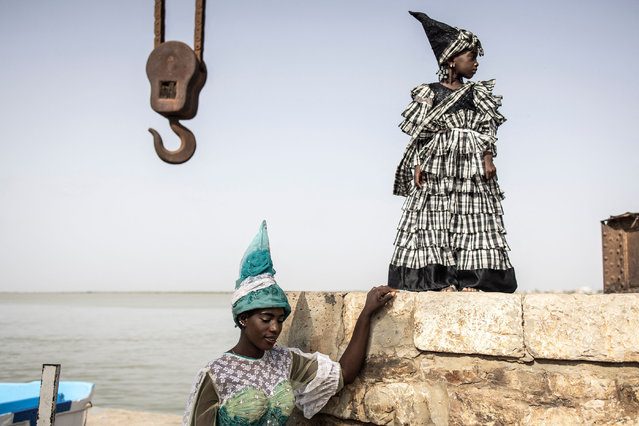 Models working with fashion designer, Ndeye Diop Guisse, poses for a portrait in front of a disused port crane, whilst wearing traditional Signares outfits in Saint Louis on August 10, 2021. The Signares were traditionally mixed European-African women in the eighteenth and nineteenth centuries from Goree Island and Saint Louis in Senegal, they held positions of power, status and wealth with-in the Atlantic slave-trade business and where know for their lavish outfits and Jewellery. (Photo by John Wessels/AFP Photo) 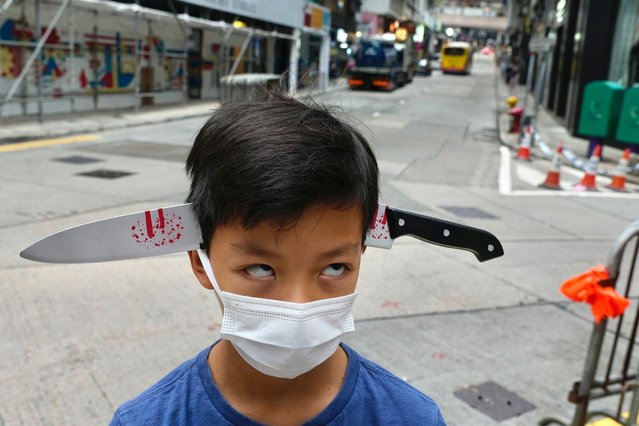 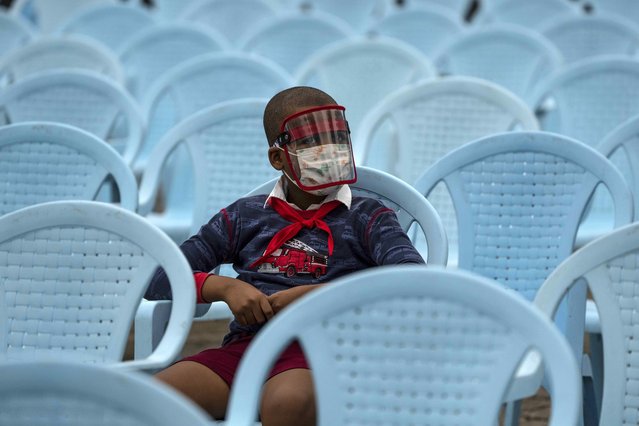 A student wearing a mask as a precaution amid the spread of COVID-19 wait during the official opening ceremony of the school year in Havana, Cuba, Monday, November 15, 2021. After 20 months of strict quarantine rules that included limiting foreign travel to the island, Cuba today reopens to the world. Airports, hotels, businesses and the remaining half of the student population resume activities. (Photo by Ramon Epinosa/AP Photo) 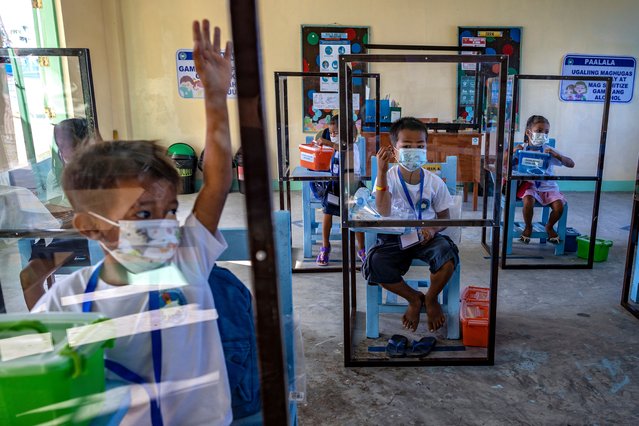 Elementary students sit inside dividers as preventive measure against COVID-19, as they attend the first day of physical classes at Longos Elementary School on November 15, 2021 in Alaminos, Pangasinan province, Philippines. After almost two years since schools closed due to the COVID-19 pandemic, the Philippines resumed limited face-to-face classes in 100 schools across the country on November 15. The Philippines is the last country in the world to reopen schools since the pandemic began, after Venezuela reopened schools on October 25. Critics are blaming the government's lackluster pandemic response for the prolonged closure of schools. (Photo by Ezra Acayan/Getty Images) 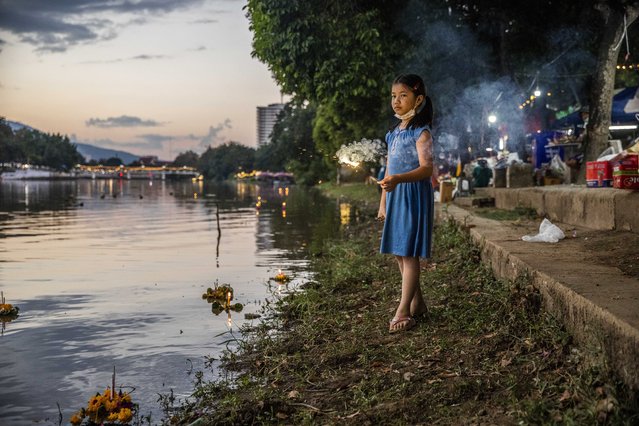 A young Thai girl plays with a sparker from a Krathong along the Ping River during Loy Krathong on November 19, 2021 in Chiang Mai, Thailand. Chiang Mai hosts its annual Loy Krathong Festival, a cultural celebration where Thais release floating lantern rafts onto the Ping River for good luck on the 12th Thai lunar month. Loy Krathong 2021 is the first major festival held in Thailand since reopening to international tourists on November 1, 2021. (Photo by Lauren DeCicca/Getty Images) 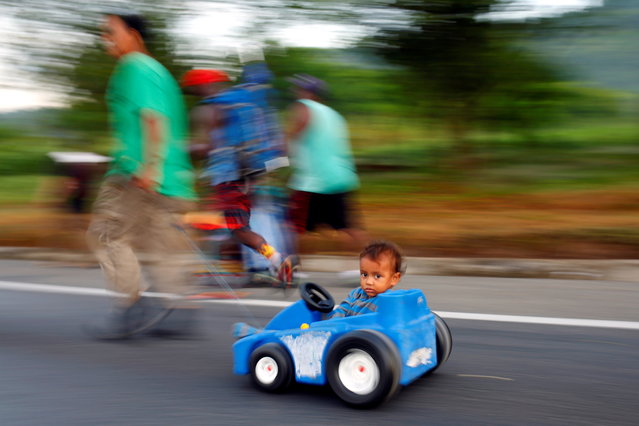 Esnayder, 2, a migrant boy from Honduras is pulled in a toy car by his father Hever Calero, as they take part in a caravan to the U.S. border, near Villa Mapastepec, Mexico on November 22, 2021. (Photo by Jose Luis Gonzalez/Reuters) 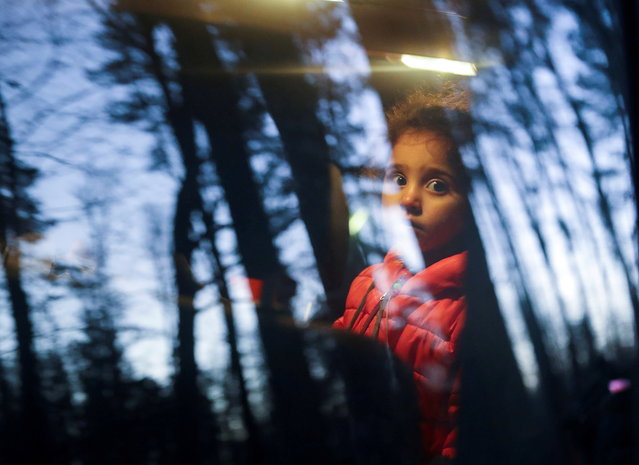 A child from a group of migrants looks through a window of a vehicle in a forest near the Polish-Belarusian border outside Narewka, Poland November 9, 2021. A group of migrants was guided out of the forest by Polish border guards and taken to a detention centre.. (Photo by Kacper Pempel/Reuters)
Edit Del
03 Dec 2021 09:36:00, post received 0 comments
Publication archive:
←   →
Popular tags:
All tags
Last searches: