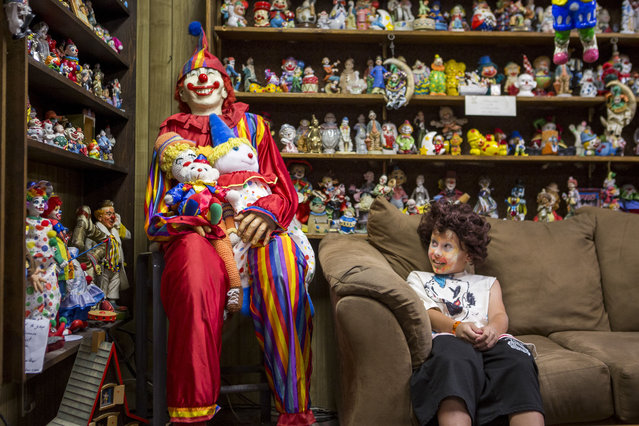 Kai James, 9, glances over at the life-size clown known as “Mr. Creepy” in the lobby of the Clown Motel in Tonopah on Tuesday, July 25, 2017. James came with his brother and mother from Las Vegas to stay for a night and dressed up in clown attire. (Photo by Patrick Connolly/Las Vegas Review-Journal via AP Photo) 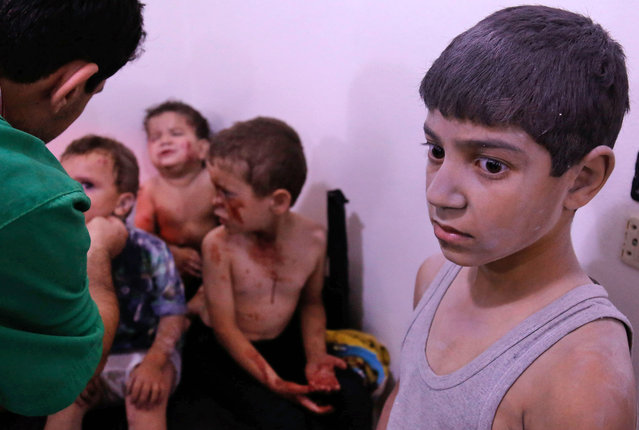 A Syrian child look on as he waits to receive treatment at a make- shift hospital after he was injured in shelling on the rebel- held town of Arbin, east of the capital, late on July 24, 2017. Women and children were among the dead in the 11:30 pm (20:30 GMT) strike on Arbin in the Eastern Ghouta rebel enclave where the government declared a ceasefire on July 22, the Syrian Observatory for Human Rights said. (Photo by Abdulmonam Eassa/AFP Photo) 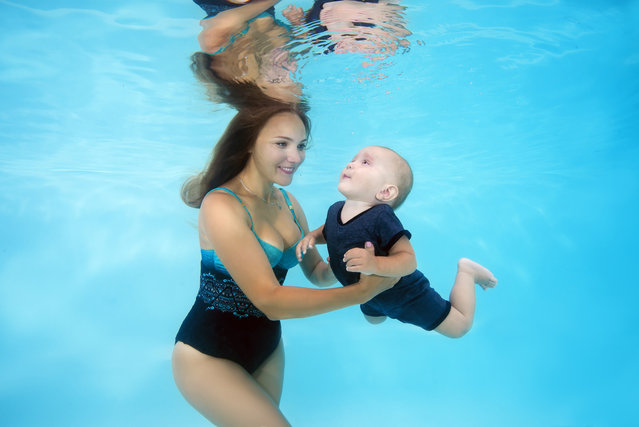 Mother and son seen posing under water in the pool on July 26, 2017 in Odessa, Ukraine. (Photo by Andrey Nekrasov/Barcroft Media) 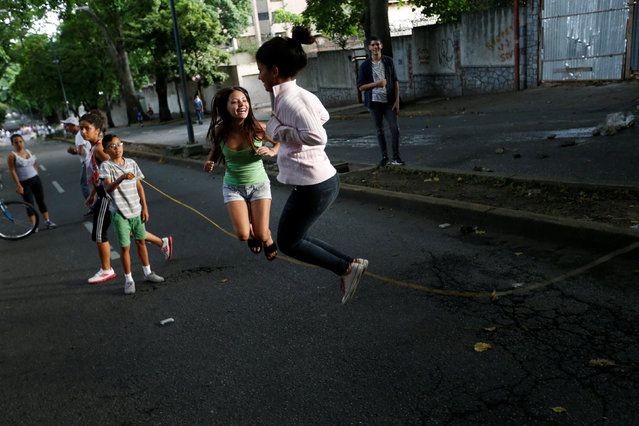 Girls skip on a street blocked by barricades during clashes at a rally against President Nicolás Maduro’s government in Caracas, Venezuela on July 19, 2017. (Photo by Andres Martinez Casares/Reuters) 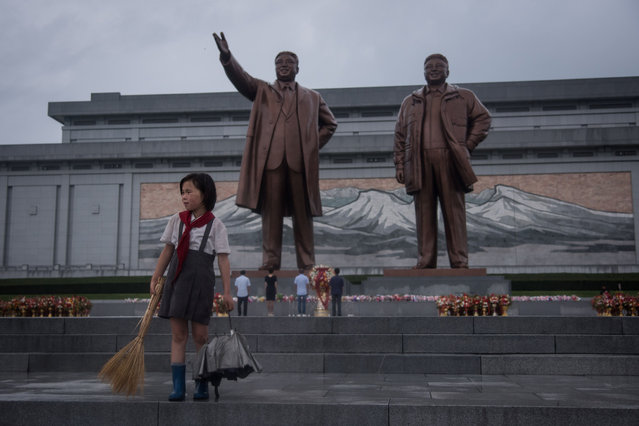 A young girl cleans steps as people bow before the statues of late North Korean leaders Kim Il- Sung (L) and Kim Jong- Il (R) as the country marks “Victory Day” at Mansu hill in Pyongyang on July 27, 2017 July 27, which is the 64 th anniversary of the signing of the Korean Armistice Agreement, is a public holiday in the nuclear- armed North and celebrated as Victory Day. (Photo by Ed Jones/AFP Photo) 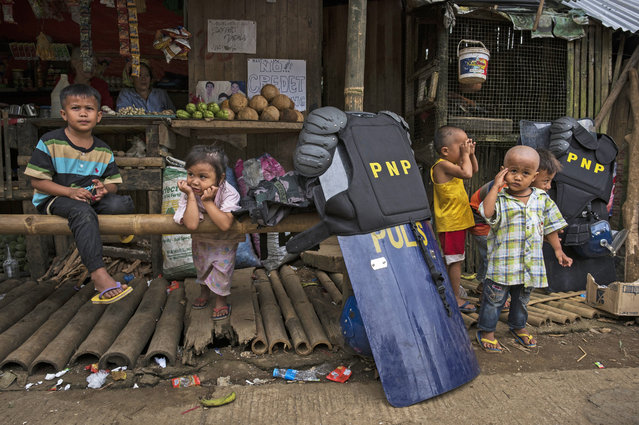 Police gear and shields are placed near playing displaced Marawi children on July 24, in Saguiaran, Lanao del Sur, southern Philippines. Evacuees report of worsening conditions inside evacuation centers, as well as their dificulty adjusting to cultural differences. They call on the government to end martial rule and the bombing of Marawi and let their traditional leaders and ways handle the thwarting of militants from their city. The Philippine Congress voted on Saturday to extend martial law in the southern part of the country since it was imposed to crush a rebellion by Islamic State-inspired militants. The decision was made two days before President Rodrigo Duterte delivers his annual state of the nation address as analysts have reportedly said Mr. Duterte appears to be using the crisis in Marawi as an excuse to impose authoritarian rule in the Philippines. (Photo by Jes Aznar/Getty Images) 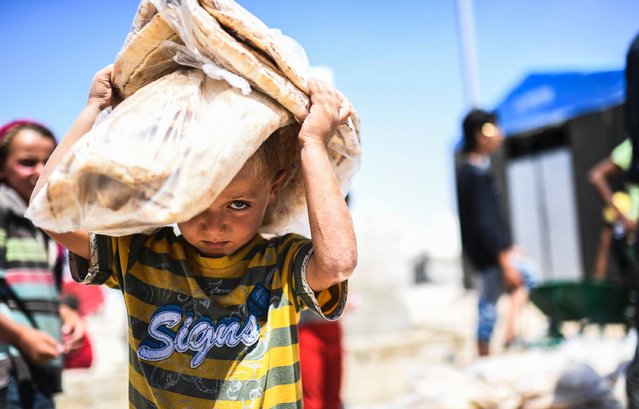 A displaced Syrian child who fled the countryside surrounding the Islamic State (IS) group's Syrian stronghold of Raqa, carries bread at a temporary camp in the village of Ain Issa on July 11, 2017. (Photo by Bulent Kilic/AFP Photo) 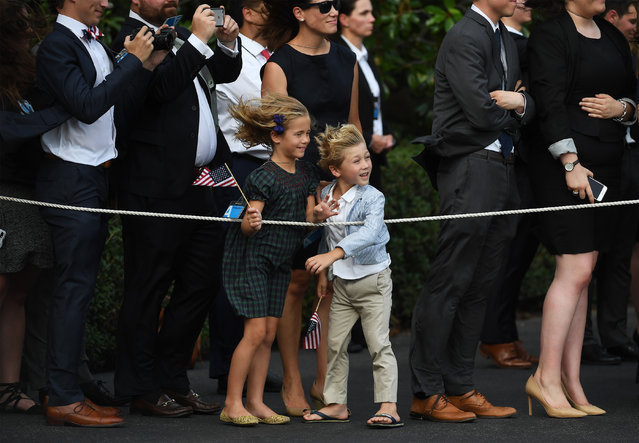 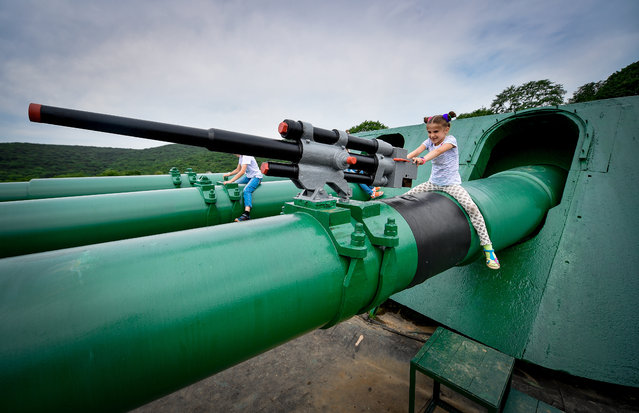 Children play in the fortress at Voroshilov coastal battery No 981 in Patriot Park in Vladivostok, Russia on July 22, 2017. (Photo by Yuri Smityuk/TASS) 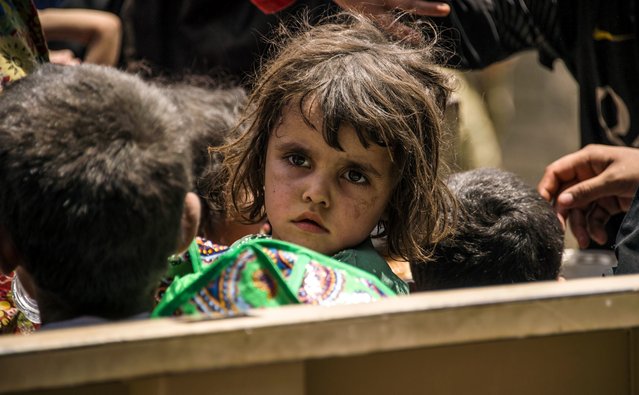 Iraqi children, who fled the fighting between government forces and Islamic State (IS) group jihadists in the Old City of Mosul, sit in a vehicle in the city's western industrial district awaiting to be relocated, on July 8, 2017. (Photo by Fadel Senna/AFP Photo) 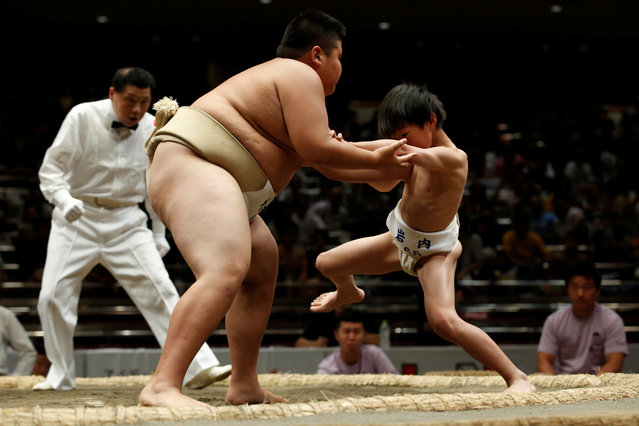 Syrian displaced girls who fled with their families the battle between U.S.-backed Syrian Democratic Forces and the Islamic State militants from Raqqa city, hold their pots as they wait to receive foods at the entrance of the main kitchen of a refugee camp, in Ain Issa town, northeast Syria, Wednesday, July 19, 2017. The U.S. military is supporting local Syrian forces in a campaign to drive IS from Raqqa. (Photo by Hussein Malla/AP Photo) 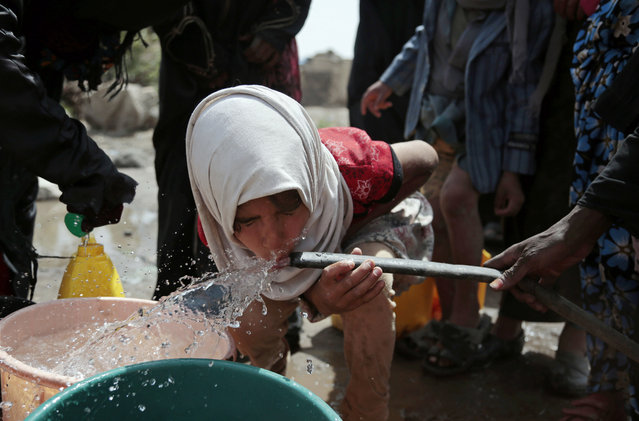 A girl drinks water from a well that is allegedly contaminated with cholera bacteria, on the outskirts of Sanaa, Yemen, Wednesday, July 12, 2017. The U.N. health agency said Tuesday that plans to ship cholera vaccine to Yemen are likely to be shelved over security, access and logistical challenges in the war-torn country. Yemen's suspected cholera caseload has surged past 313,000, causing over 1,700 deaths in the world's largest outbreak. (Photo by Hani Mohammed/AP Photo) 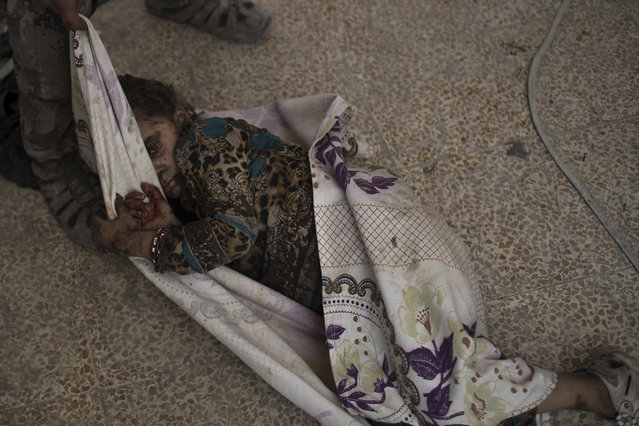 An injured girl is carried to receive medical assistance as Iraqi forces continue their advance against Islamic State militants in the Old City of Mosul, Iraq, Monday, July 3, 2017. (Photo by Felipe Dana/AP Photo) 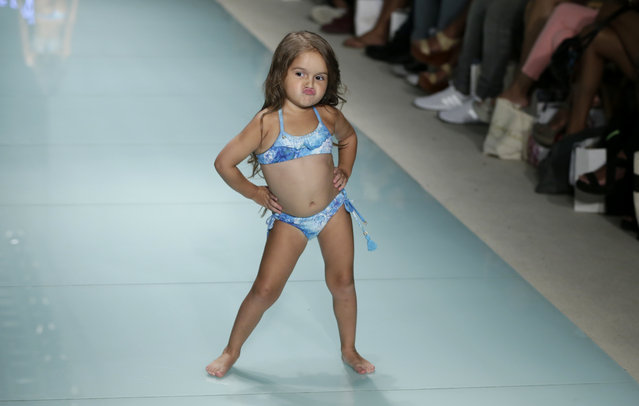 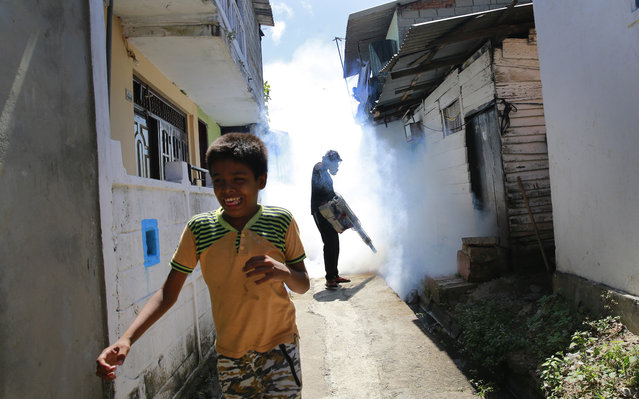 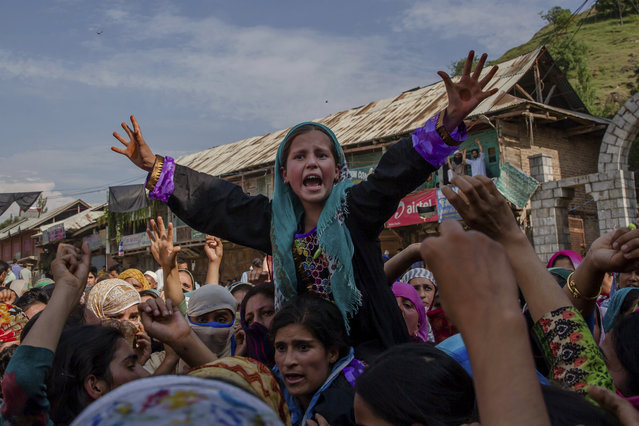 A Kashmiri village girl shouts pro-freedom slogans during the funeral procession of a civilian Tanveer Ahmed Wani in Beerwah about 40 kilometers (25 miles) west of Srinagar, Indian controlled Kashmir, Friday, July 21, 2017. The Indian army fired at worshippers outside a mosque in disputed Kashmir on Friday, killing one man and injuring another, after some threw rocks, police and residents said. (Photo by Dar Yasin/AP Photo) In this photo taken on Friday, July 28, 2017, Umm Ali gives her son a bath to beat the heat in the poor neighborhood of Fadhil in Baghdad, Iraq. Iraq's weather service warned Thursday that temperatures will increase next week in most parts of the country, with the highs expected to reach 51 degrees Celsius, or about 124 degrees Fahrenheit, adding to the daily woes of Iraqi citizens already facing a deteriorated security situation and lack of public services. (Photo by Hadi Mizban/AP Photo) 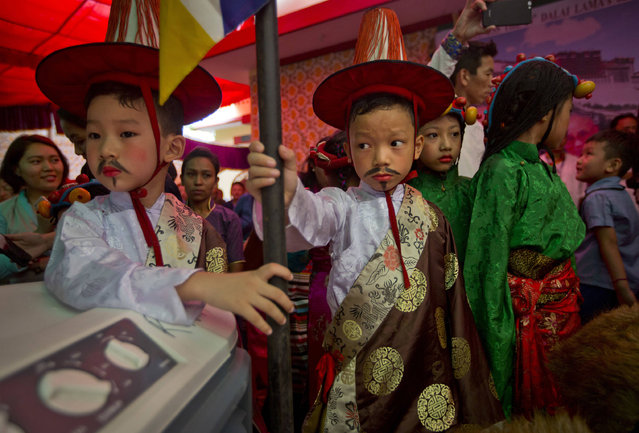 Tibetans children watch others dance as they wait for their turn to perform during celebrations marking the 82nd birthday of their spiritual leader the Dalai Lama at a Tibetan settlement in New Delhi, India, Thursday, July 6, 2017. Thousands belonging to Tibetan community waved white scarves and banners, lit incense and prayed for the Dalai Lama's long life as he turned 82 on Thursday. The Dalai Lama is currently visiting the Jokhang Gonpa, a Buddhist monastery, built in Ladakh in the Indian portion of Kashmir. (Photo by Manish Swarup/AP Photo) 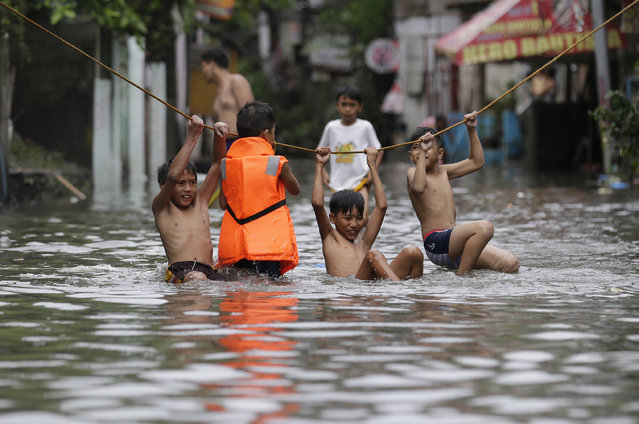 Boys play outside their flooded homes after heavy rains from tropical storm “Nesat” flooded parts of metropolitan Manila, Philippines on Thursday, July 27, 2017. Strong rains caused floods in low-lying areas and classes were suspended in most schools in the capital. (Photo by Aaron Favila/AP Photo) 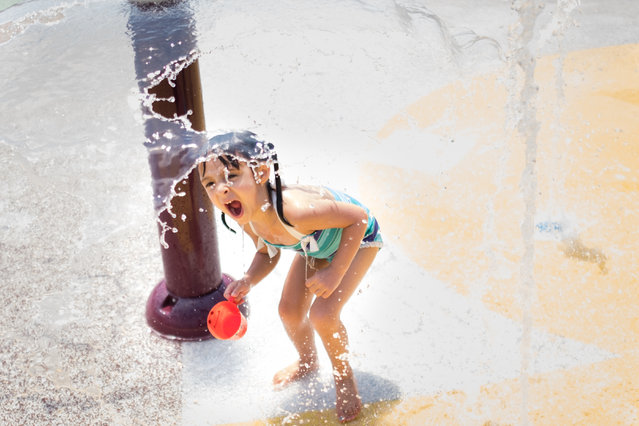