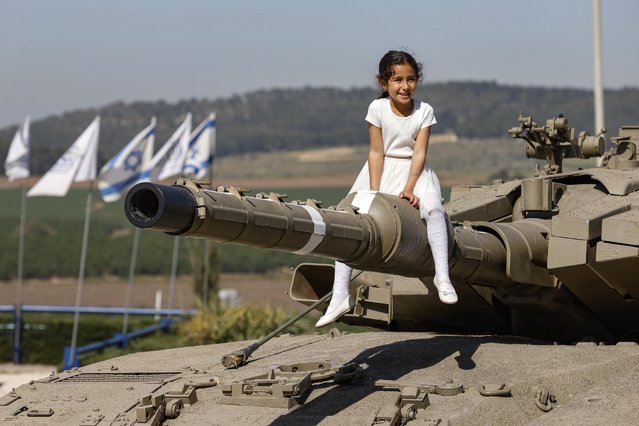 A girl sits on the barrel of a tank turret at the Israeli Armoured Corps memorial in Latrun, between Jerusalem and Tel Aviv, on April 14, 2021, following a ceremony commemorating Yom HaZikaron (Israel's Remembrance Day for fallen soldiers). Israel annually marks Yom HaZikaron to commemorate 23,928 fallen soldiers and fighters since 1860, just before the celebrations marking the Jewish State's 73rd anniversary, according to the Jewish calendar. (Photo by Jack Guez/AFP Photo) 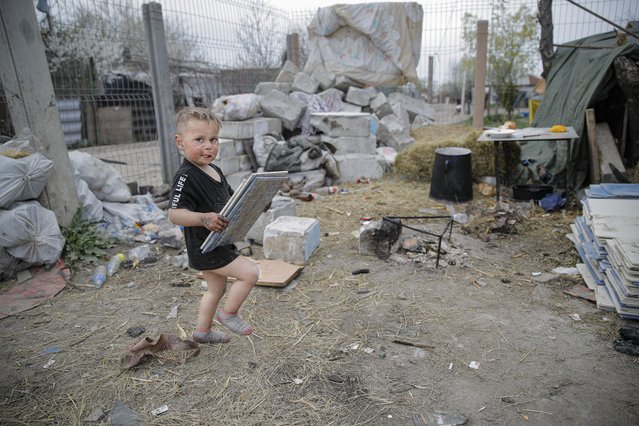 A small boy carries discarded ceramic tiles for his family's home during a raid of the National Environmental Guard through scrape littered back yards in Vidra, Romania, Tuesday, April 13, 2021. Many people in the Roma community in SIntesti scrape a dangerous living by illegally setting fire to whatever they can find that contains metal, from computers to tires and electrical cables. (Photo by Vadim Ghirda/AP Photo) 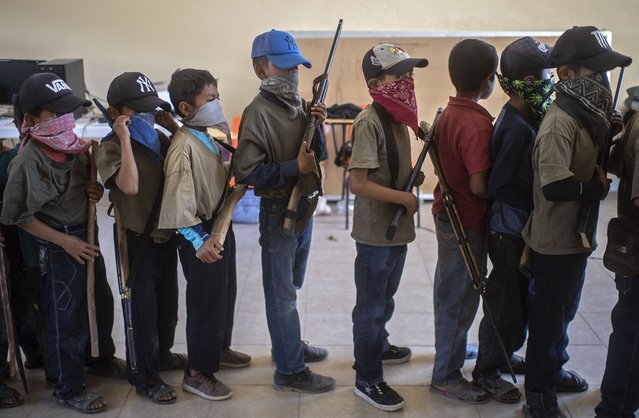 Children holding toy weapons and wooden sticks, take part in a training demonstration of the Regional Coordinator of Community Authorities (CRAC-PF) vigilante force, in the village of Ayahualtempa, Guerrero State, Mexico, on April 10, 2021. The CRAC-PF vigilante group trains children as young as five so they can protect themselves from drug-related criminal groups operating in the area, according to their leaders. (Photo by Pedro Pardo/AFP Photo) 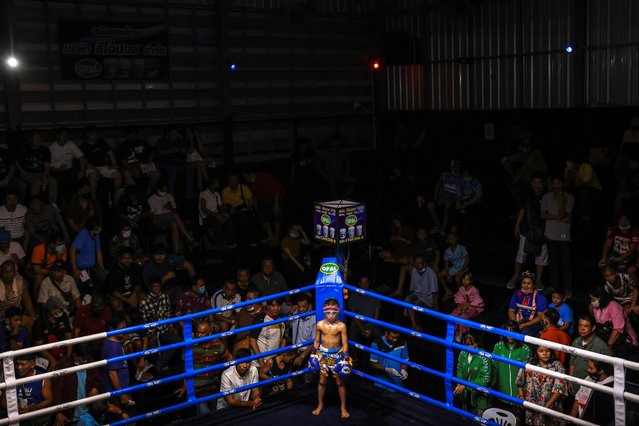 Pornpattara Peachurai, known as Tata Por Lasua as his fighter name, 9, a child Muay Thai boxer, wears a face shield as he stands before his boxing match at a temporary boxing ring in Chachoengsao province, Thailand, October 26, 2020. (Photo by Athit Perawongmetha/Reuters) 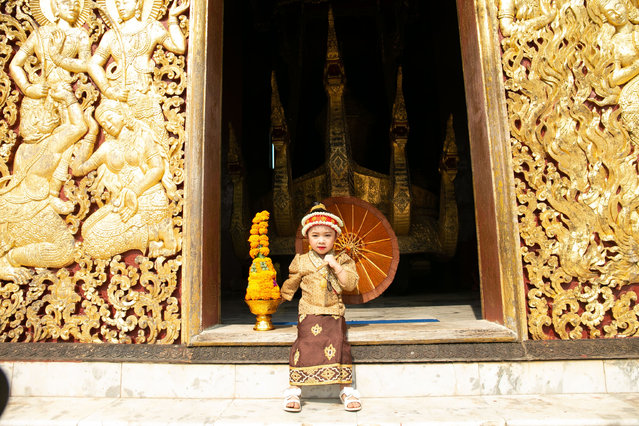 A girl wearing a traditional dress poses for a photo in a temple during the Songkran Festival or the Lao New Year in Luang Prabang, Laos, April 15, 2021. (Photo by Xinhua News Agency/Rex Features/Shutterstock) 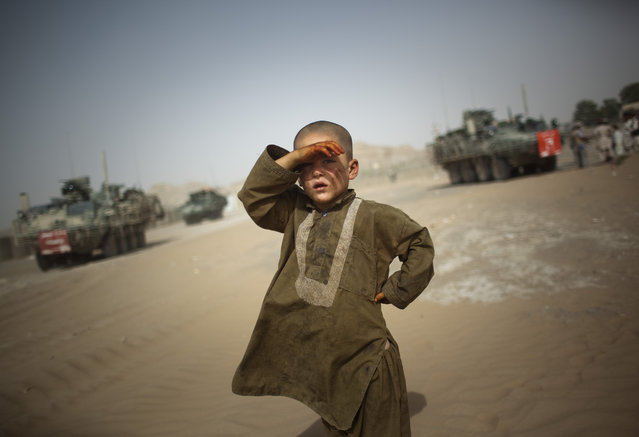 A child looks on as military vehicles of 5th Striker Brigades drive past his village on the outskirts of Spin Boldak, about 100 kilometers (63 miles, File) southeast of Kandahar, Afghanistan, on Auguast 6, 2009. (Photo by Emilio Morenatti/AP Photo/File) 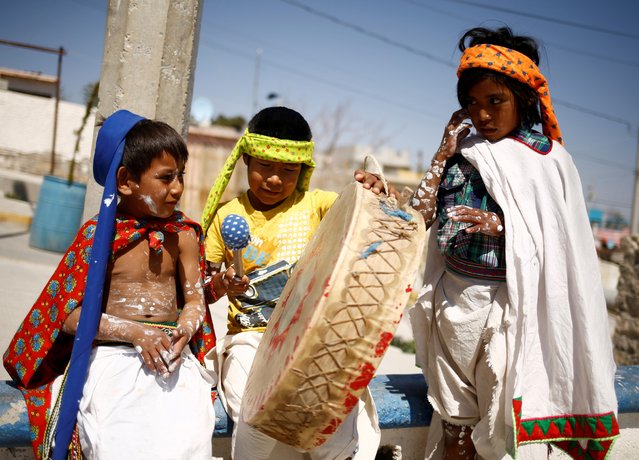 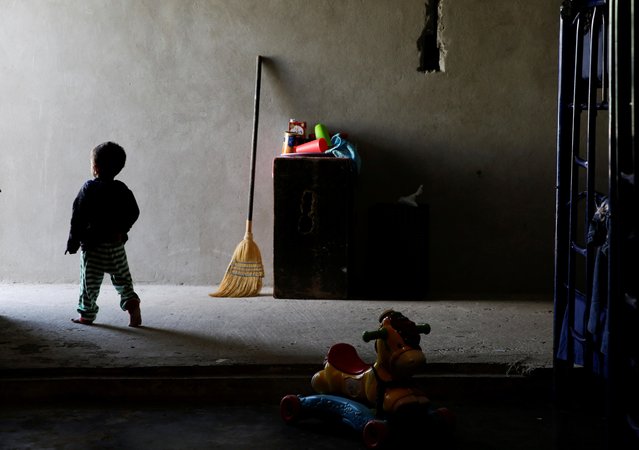 An asylum-seeking migrant child from Central America, who was airlifted from Brownsville to El Paso, Texas, and deported from the U.S. with his mother, is seen inside the El Buen Samaritano shelter in Ciudad Juarez, Mexico on April 1, 2021. (Photo by Jose Luis Gonzalez/Reuters) 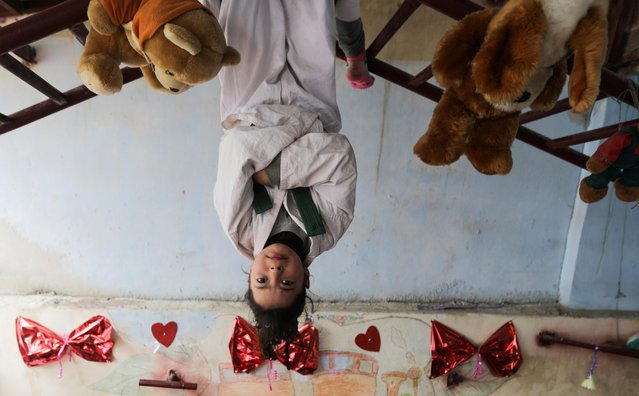 A girl practices martial arts during a training at a school in Syrian opposition-held village of al-Jeineh, Syria on April 11, 2021. (Photo by Khalil Ashawi/Reuters) 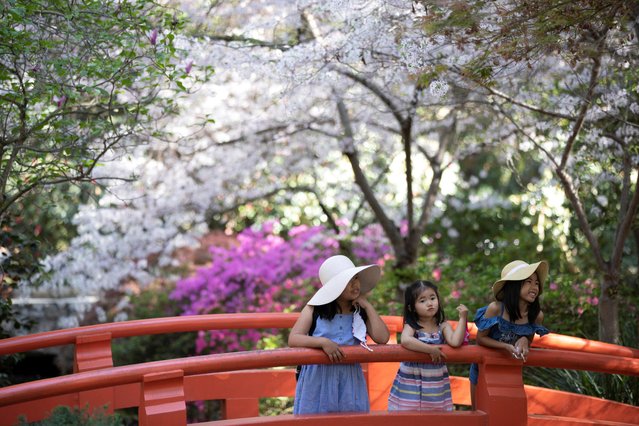 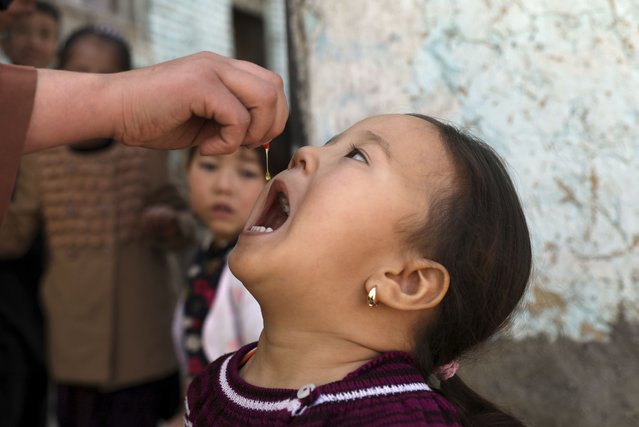 Shabana Maani, gives a polio vaccination to a child in the old part of Kabul, Afghanistan, Monday, March 29, 2021. Afghanistan is inoculating millions of children against polio after pandemic lockdowns stalled the effort to eradicate the crippling disease. But the recent killing of three vaccinators points to the dangers facing the campaign. (Photo by Rahmat Gul/AP Photo) 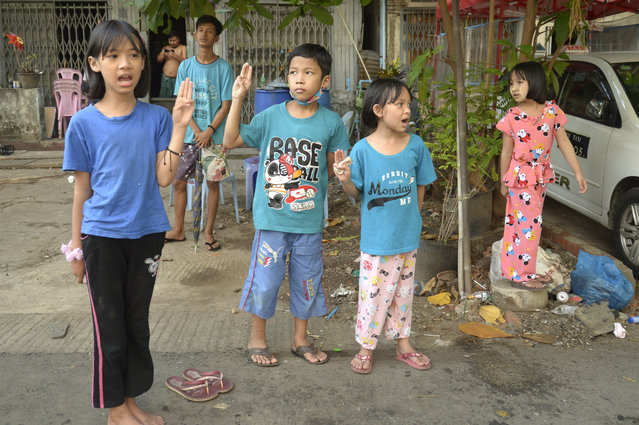 Children flash the three-fingered symbol of resistance as they join an anti-coup protest in Yangon, Myanmar, Saturday, April 10, 2021. Security forces in Myanmar cracked down heavily again on anti-coup protesters Friday even as the military downplayed reports of state violence. (Photo by AP Photo/Stringer) 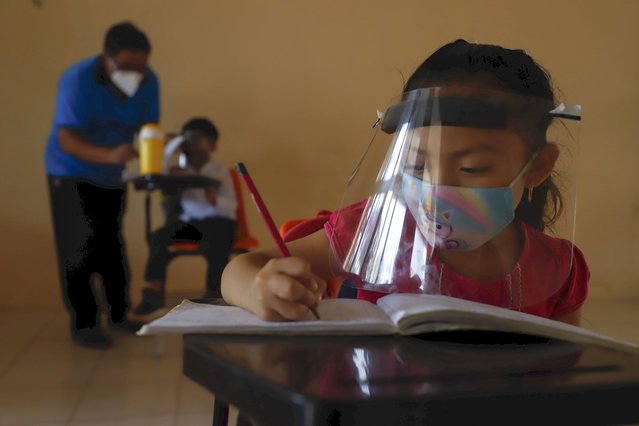 Wearing a mask and a face shield to curb the spread of the new coronavirus, 10-year-old Jade Chan Puc writes in her workbook during the first day of class at the Valentín Gomez Farias Indigenous Primary School in Montebello, Hecelchakan, Campeche state, Monday, April 19, 2021. Campeche is the first state to transition back to the classroom after a year of remote learning due to the pandemic. (Photo by Martin Zetina/AP Photo) 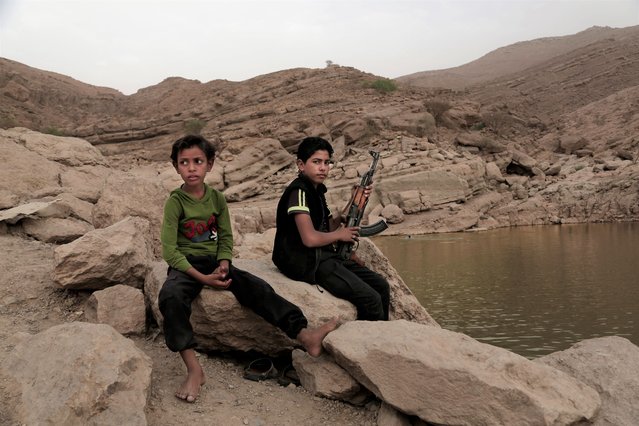 In this July 30, 2018, file photo, a 17-year-old boy holds his weapon at the dam in Marib, Yemen. The battle for the ancient desert city has become key to understanding wider tensions now inflaming the Middle East and the challenges facing any efforts by President Joe Biden’s administration to shift U.S. troops out of the region. (Photo by Nariman El-Mofty/AP Photo/File) 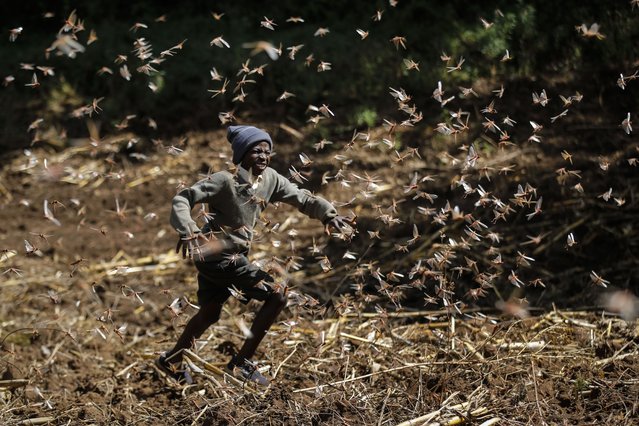 Stephen Mudoga, 12, the son of a farmer, chases away a swarm of locusts on his farm as he returns home from school, at Elburgon, in Nakuru county, Kenya Wednesday, March 17, 2021. It's the beginning of the planting season in Kenya, but delayed rains have brought a small amount of optimism in the fight against the locusts, which pose an unprecedented risk to agriculture-based livelihoods and food security in the already fragile Horn of Africa region, as without rainfall the swarms will not breed. (Photo by Brian Inganga/AP Photo) 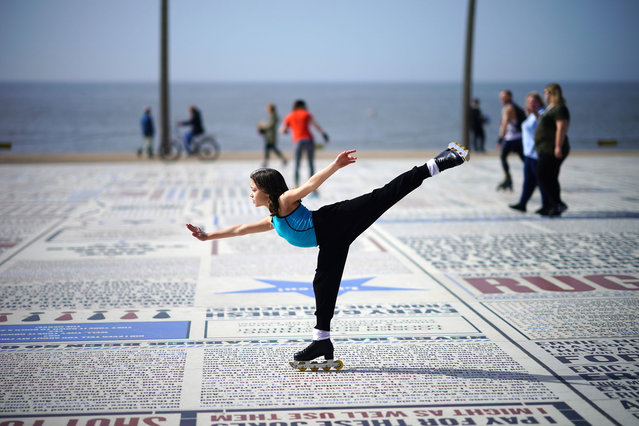 A young girl practices her skating skills in the Spring sunshine on Blackpool promenade as parts of the UK are set to see the warmest day of the year so far on March 30, 2021 in Blackpool, United Kingdom. Forecasters are predicting temperatures of 22C (72F) and with the easing of pandemic lockdown rules many people will be heading for the outdoors. (Photo by Christopher Furlong/Getty Images) 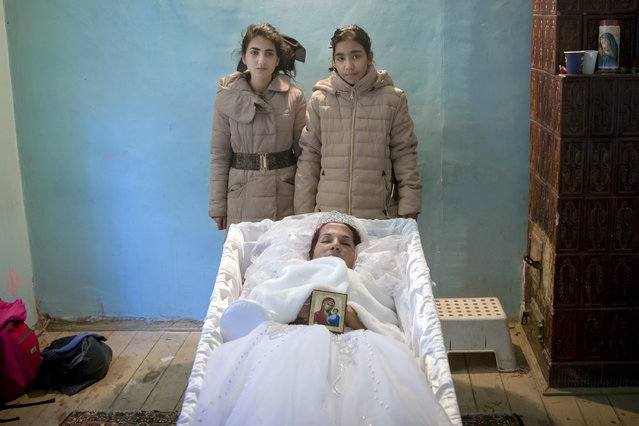 In this Tuesday, November 3, 2015 photograph, Maria Ion, a 38 year-old widow, mother of five, who died in last Friday's fire at the Colectiv nightclub where she occasionally worked as a cleaning lady, lies in a coffin wearing a bride dress as two of her children, Denisa, 15 years-old, left, and 11 year-old Alexandra pose next to it, at the family house in Bucharest, Romania. The Oscar-nominated Romanian documentary film “Collective” follows a group of journalists delving into the state of health care in the eastern European country in the wake of a deadly 2015 nightclub fire that left dozens of burned victims in need of complex treatment. What they revealed was decades of deep-rooted corruption, a heavily politicized system scarily lacking in care. (Photo by Vadim Ghirda/AP Photo/File) 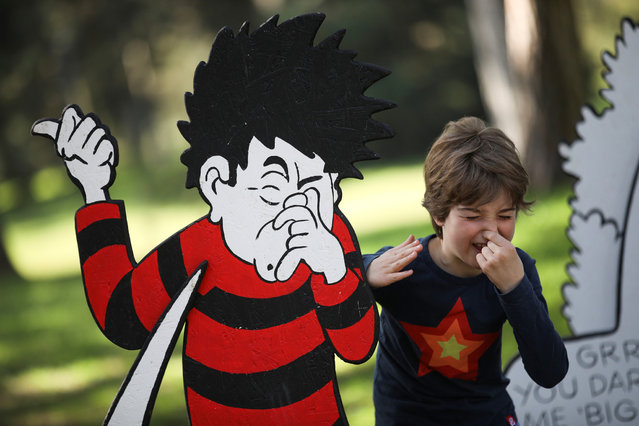 A boy plays at the Easter festival inspired by Beano comics at the Royal Botanic Gardens, Kew in London, Britain, March 30, 2021. (Photo by Tom Nicholson/Reuters) 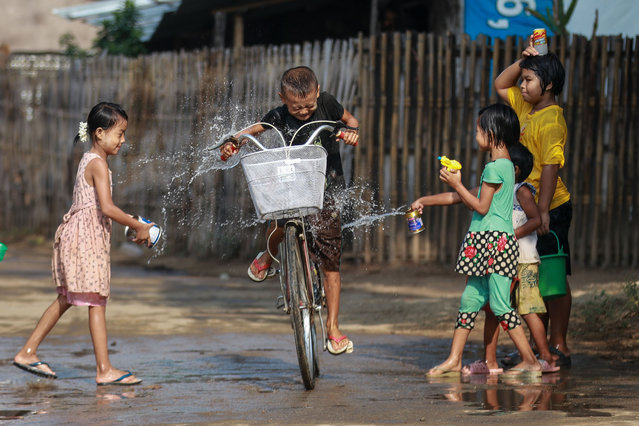 Children douse a child on a bicycle with water to mark the Thingyan Water Festival at a village in Naypyitaw, Myanmar, 14 April 2021. Myanmar anti-coup activists have called for people to boycott official Thingyan festivities organized by the military junta. The Thingyan Water Festival, the Burmese traditional New Year, is usually celebrated with family reunions and water-throwing festivities. According to the Assistance Association for Political Prisoners (AAPP), at least 700 people have been killed by Myanmar armed forces since the military seized power on 01 February 2021. Protests continue despite the intensifying crackdown on demonstrators. (Photo by EPA/EFE/Stringer)
Edit Del
12 May 2021 08:49:00, post received 0 comments
Publication archive:
←   →
Popular tags:
All tags
Last searches: