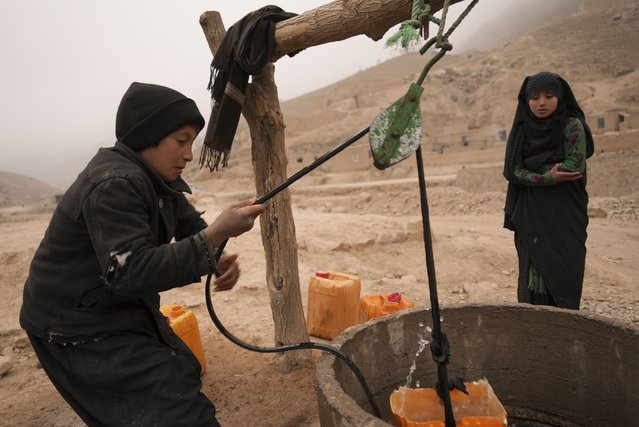 An Afghan boy pulls improvised bucket of water out of the well in Balucha, Afghanistan, Monday, December 13, 2021. Severe drought has dramatically worsened the already desperate situation in Afghanistan forcing thousands of people to flee their homes and live in extreme poverty. Experts predict climate change is making such events even more severe and frequent. (Photo by Mstyslav Chernov/AP Photo) 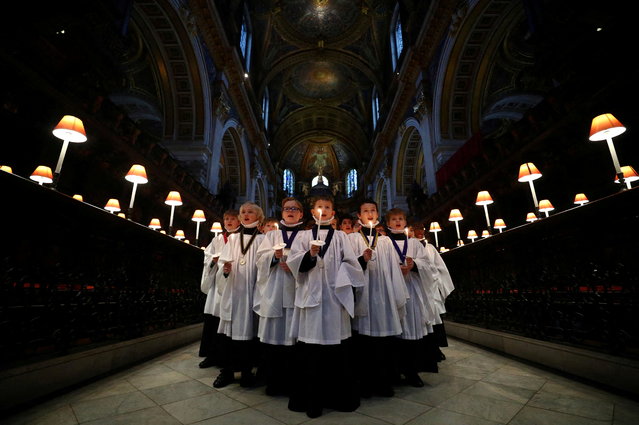 Choristers from St Paul's Cathedral choir take part in a rehearsal photocall at the cathedral in London, Britain, December 21, 2021. (Photo by Hannah McKay/Reuters) 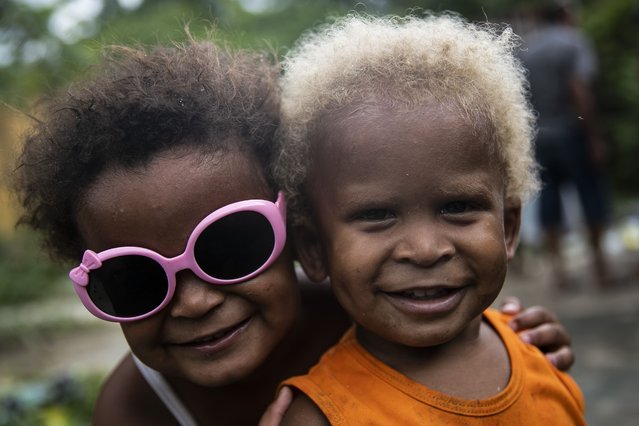 Children smile for the camera during a Christmas food donation by “Covid Sem Fome” or Covid Without Hunger, a non-governmental organization that works to releave hunger in the Jardim Gramacho favela of Rio de Janeiro, Brazil, Sunday, December 19, 2021. (Photo by Bruna Prado/AP Photo) 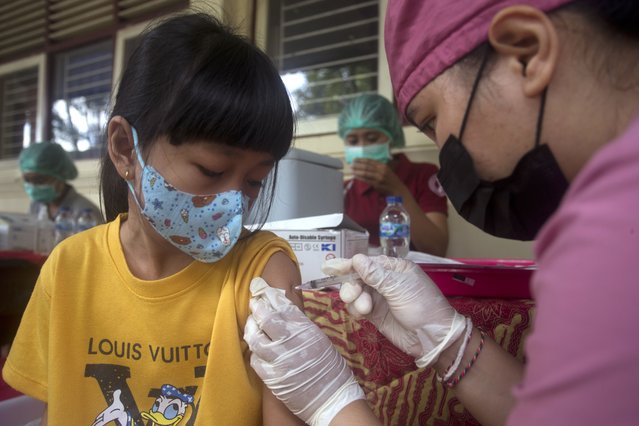 A girl receives a shot of the Sinovac COVID-19 vaccine during a vaccination campaign at an elementary school in Bali, Indonesia on Thursday, December 23, 2021. (Photo by Firdia Lisnawati/AP Photo) 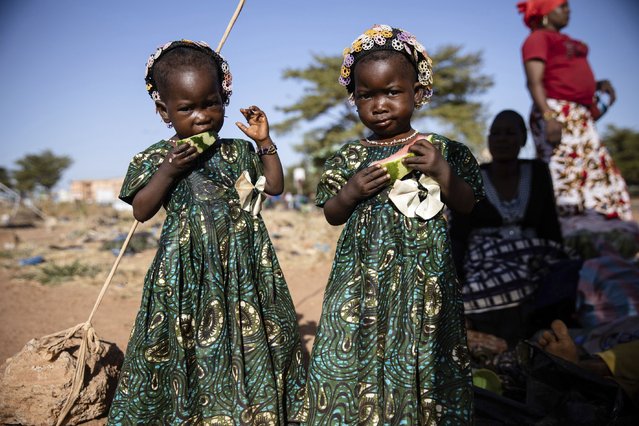 Twins eat slices of watermelon Thursday November 25, 2021 at the Patte d'Oie district of Ouagadougou, Burkina Faso, where mothers of twins come to beg on the road. In Burkina Faso, a country with a strong belief in the supernatural, twins are regarded as children of spirits whose mothers were specially selected to bear them. (Photo by Sophie Garcia/AP Photo) 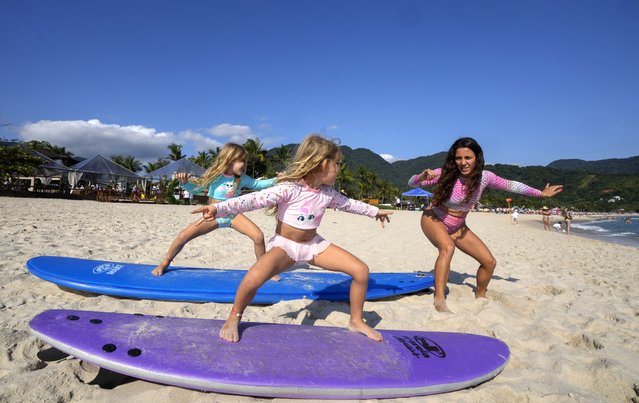 Rayana Tanimoto teaches her five-year-old twin daughters Eloa, left, and Ayla, how to surf, at Maresias beach, in Sao Sebastiao, Brazil, Saturday, November 27, 2021. Tanimoto, caught the surfing bug from her father. Together, they opened a small hotel on Maresias beach so she could raise her daughters, make a living and get in the water as often as possible. (Photo by Andre Penner/AP Photo) 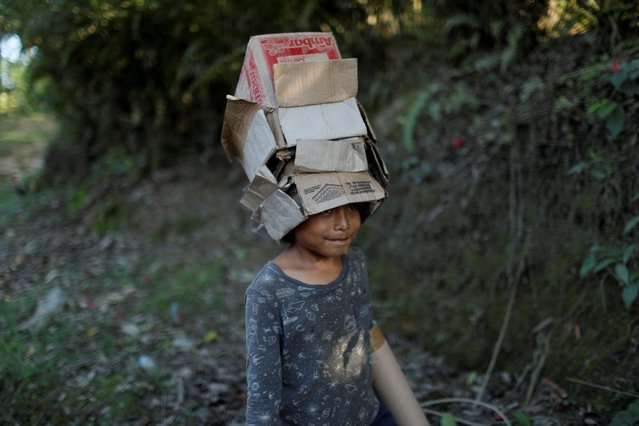 A boy plays with cardboard boxes the day before the interment of recently exhumed human remains dating back to Guatemala's 36-year civil war, in Sepur Zarco, Guatemala on December 9, 2021. (Photo by Sandra Sebastian/Reuters) 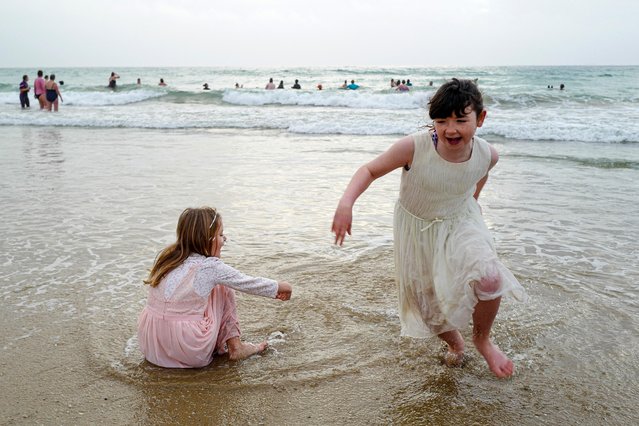 Young members of the She Swims Falmouth group enter the sea for a New Year's Eve swim at Gyllyngvase Beach, on December 31, 2021 in Falmouth, Cornwall, England. Founded in October 2020 by local swimming teacher Gemma Lawley, She Swims Falmouth provides a platform for women in Cornwall to come together through their love of wild swimming. (Photo by Hugh R Hastings/Getty Images) 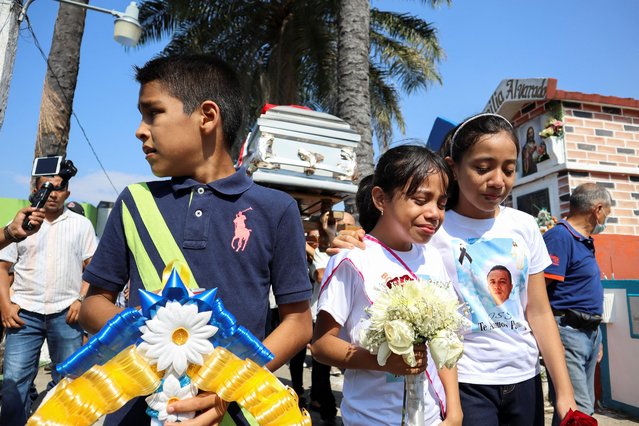 Relatives and the daughters of Leonel Gomez Zepeda, who died in a truck crash along other Guatemalan migrants in southern Mexico, participate in a funeral procession toward the cemetery in Malacatan, Guatemala on December 20, 2021. (Photo by Jose Torres/Reuters) 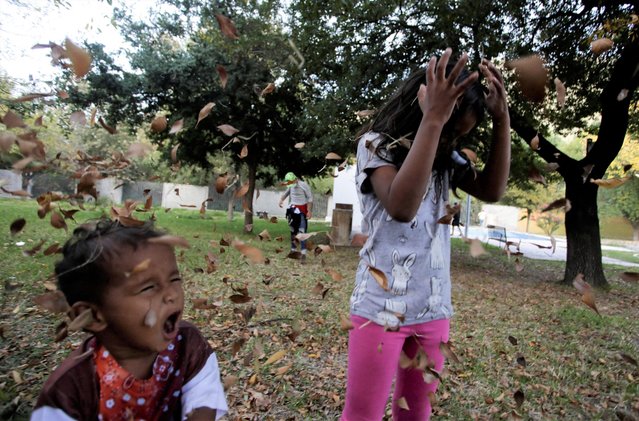 Migrant children play with leaves during Christmas Eve at a shelter, as they travel with their parents as part of a caravan with humanitarian visas to transit throughout the country, in Monterrey, Mexico on December 24, 2021. (Photo by Daniel Becerril/Reuters) 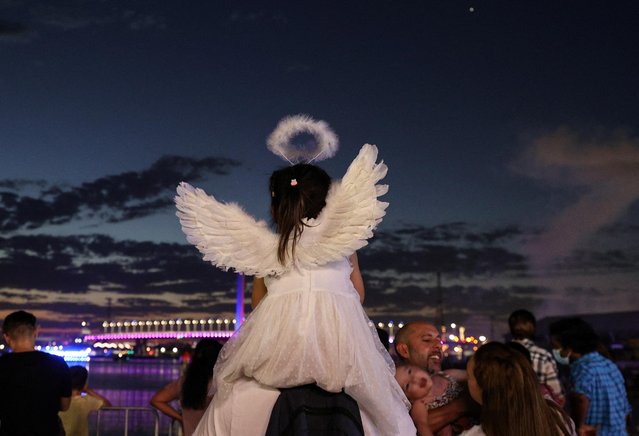 A child wears angel wings while families celebrate New Year's Eve on the Yarra River waterfront, as the Omicron variant of the coronavirus disease (COVID-19) continues to spread, in Melbourne, Australia, December 31, 2021. (Photo by Loren Elliott/Reuters) 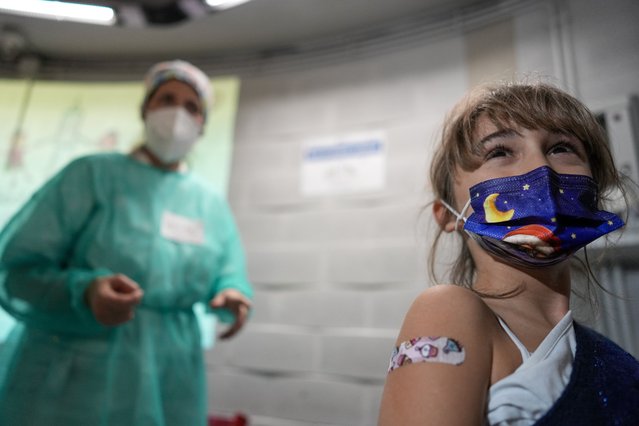 A girl shows a bandaid she received after having a dose of Pfizer-BioNTech COVID-19 vaccination for children aged 5 - 11, in Rome, Wednesday, December 15, 2021. Italy has started vaccinating children aged 5-11 against COVID-19 as the government braces for the spread of the omicron variant during the holiday season. (Photo by Andrew Medichini/AP Photo) 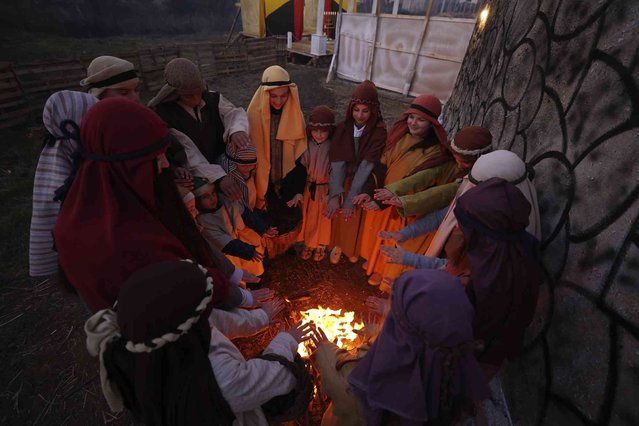 Catholic local children warm up by the fire before the reenactment of the birth of Jesus Christ, in Hajmel, Albania, Wednesday, December 22, 2021. Hundreds of residents from three villages dominated by Catholic communities convene in Hajmen commune, 110 kilometers (65 miles) north of the capital Tirana, to raise the small village where Christ was born 2,000 years ago. (Photo by Franc Zhurda/AP Photo) 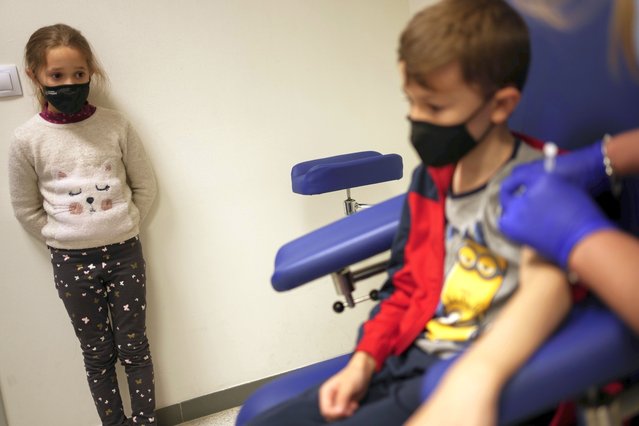 A young girl watches as a boy receives a vaccine as children are administered the first shot of the Pfizer COVID-19 vaccine at Hospital de Henares in Coslada, Madrid, Wednesday, December 15, 2022. Starting from Wednesday, Spain is trying to begin a speedy vaccination rollout for around 3.3 million children aged 5-11, the group that is leading contagion rates in the country and largely believed to be spreading new infections to their parents and grandparents. (Photo by Bernat Armangue/AP Photo) 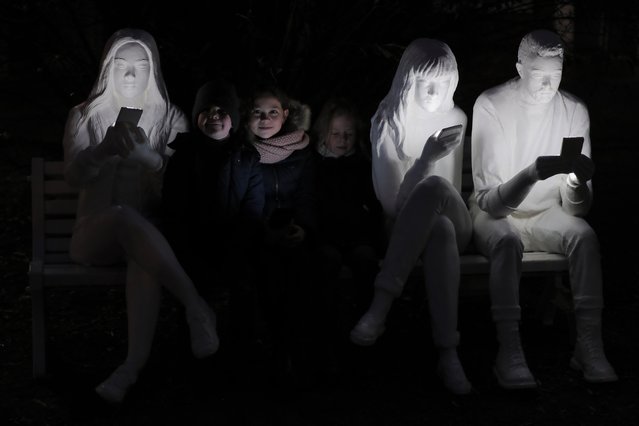 Children pose for photos by an installation named “Absorbed by Light” during a light art festival in Knokke-Heist, Belgium, on December 18, 2021. (Photo by Xinhua News Agency/Rex Features/Shutterstock) 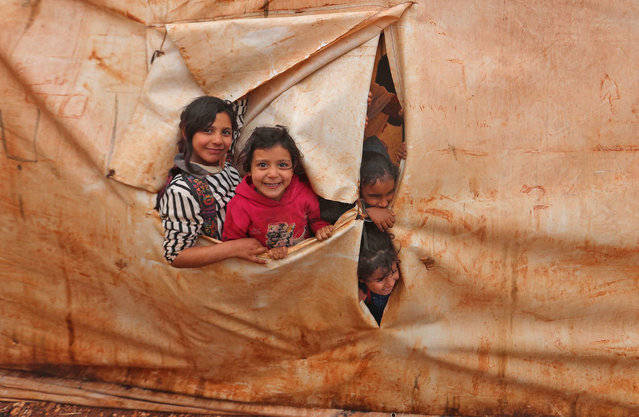 Children attend class in make-shift classrooms at a camp for the displaced by the village of Killi, near Bab al-Hawa by the border with Turkey, in Syria's northwestern Idlib province on December 20, 2021. (Photo by Aaref Watad/AFP Photo) 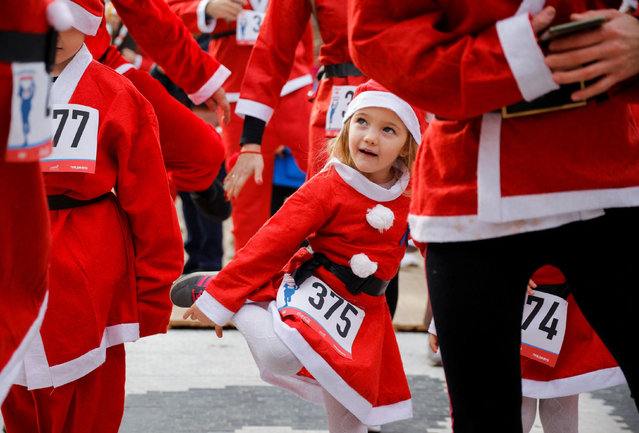 A kid dressed as Santa Claus dances along with others during the annual Santa race competition in Skopje, North Macedonia, December 26, 2021. (Photo by Ognen Teofilovski/Reuters) 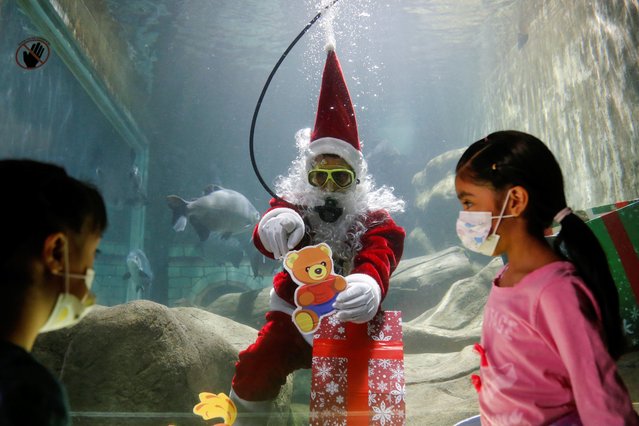 Diver Miguel Villanueva poses in a Santa costume inside a fishtank at the aquarium of a zoo in Guadalajara, Mexico, 19 December 2021. (Photo by Francisco Guasco/EPA/EFE) 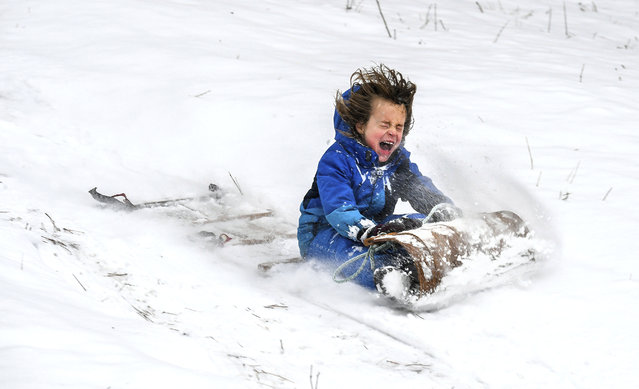 Corn Mayer, 8, takes a ride down a slope at Underhill Park in Spokane, Wash., Monday, December 20, 2021, on a wooden toboggan that has been in his grandmother's family since the 1960s. (Photo by Dan Pelle/The Spokesman-Review via AP Photo)
Edit Del
13 Jan 2022 07:47:00, post received 0 comments
Publication archive:
←   →
Popular tags:
All tags
Last searches: