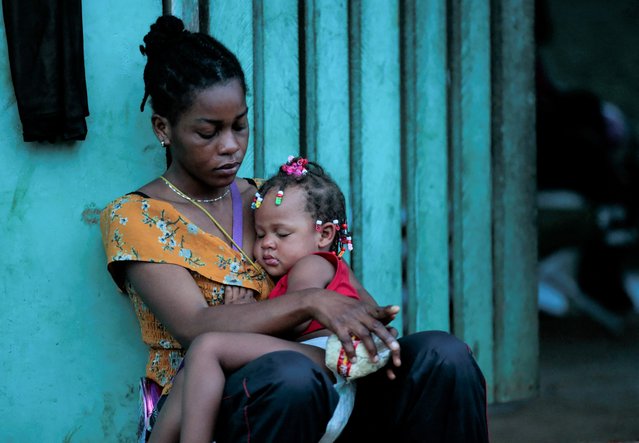 A migrant and a baby wait to be transported from Bajo Chiquito village to the Migrants Reception Station in Lajas Blancas, Darien Province, in Panama on August 23, 2021. Migrants from Haiti and other countries arrive in Panamanian territory, after walking for five days in the Darien Gap. Panama and Colombia reached an agreement to control the flood of migrants crossing the common border to the United States. (Photo by Rogelio Figueroa/AFP Photo) 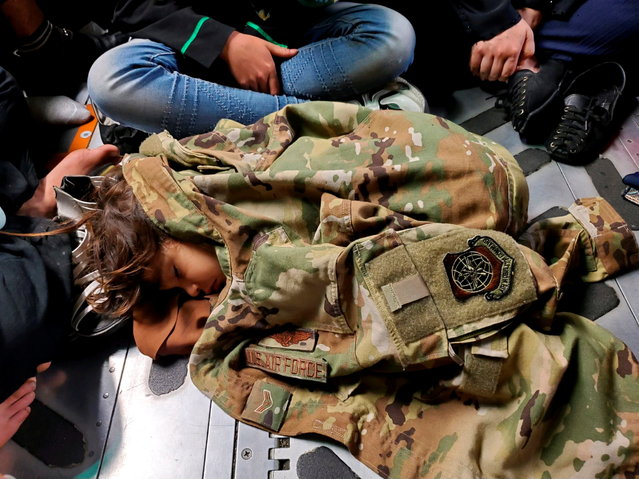 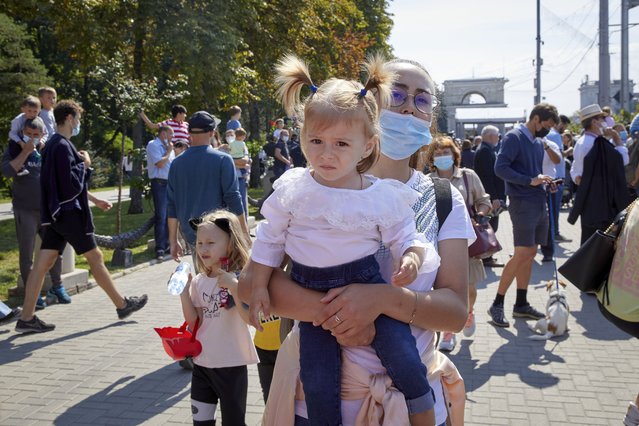 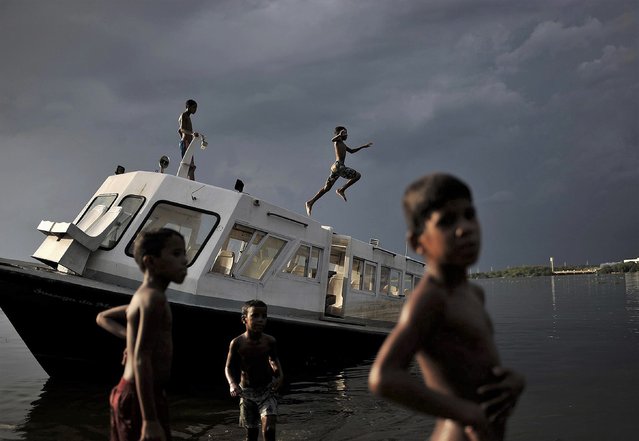 Children from the favelas around Guanabara Bay, ignore the danger and swim among garbage and alligators in a highly polluted waters of Guanabara Bay in Rio De Janeiro, Brazil on August 26, 2021. While Covid-19 pandemic continues to impact the life with high number of deaths and patients, this increasingly contaminated water even worsens the situation in terms of public health. (Photo by Fabio Teixeira/Anadolu Agency via Getty Images) 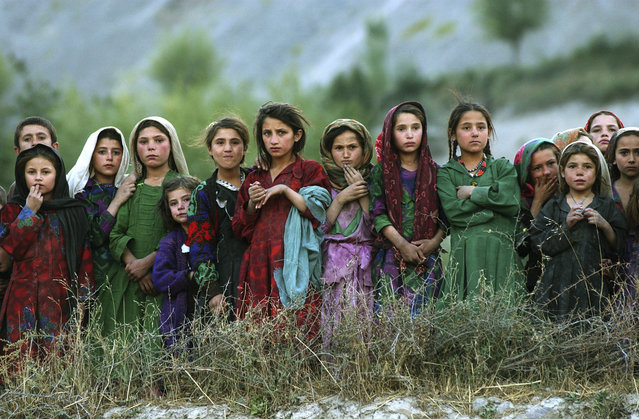 Local girls look at U.N. workers unloading ballot kits from a U.N. helicopter in Ghumaipayan Mahnow village, some 410 kilometers (256 miles) northeast of Kabul, Afghanistan, Monday, October 4, 2004. By air is the only way to deliver the electoral material in the inaccessible areas of the Badakhshan province. (Photo by Emilio Morenatti/AP Photo) 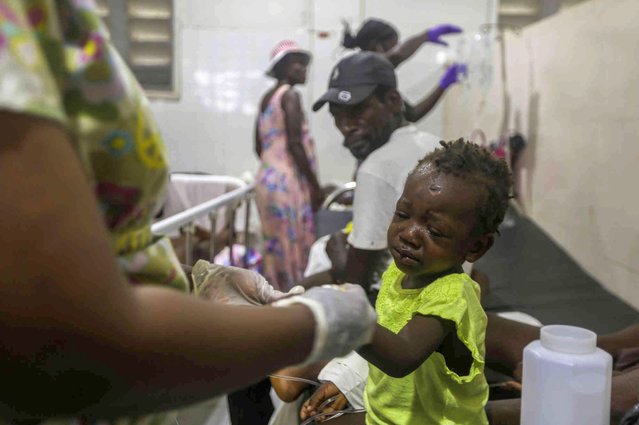 A child injured by the recent 7.2 magnitude earthquake is treated at the Immaculee Conception hospital in Les Cayes, Haiti, Thursday, August 19, 2021. (Photo by Joseph Odelyn/AP Photo) 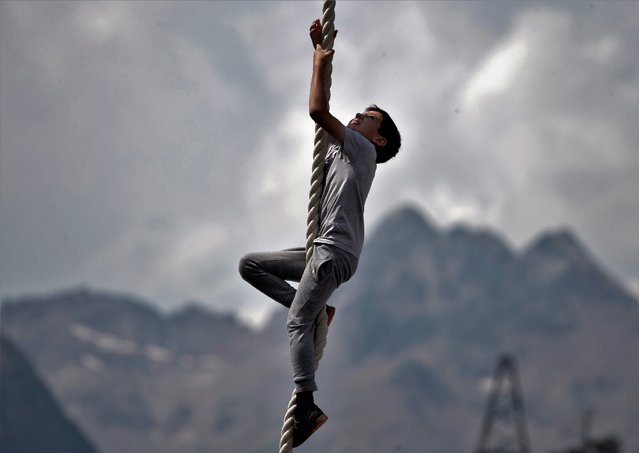 A local boy climbs a rope during the Festival of World Records held in Prielbrusye (Mount Elbrus area) at a height of 2,000m above sea level to mark the upcoming Statehood Day of Kabardino-Balkaria, Russia on August 23, 2021. (Photo by Yelena Afonina/TASS) 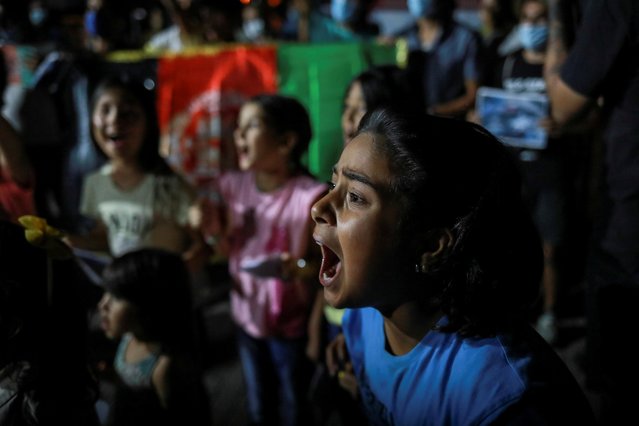 A girl shouts slogans during a demonstration of Afghan migrants against the Taliban takeover of Afghanistan, on the island of Lesbos, Greece, August 16, 2021. (Photo by Elias Marcou/Reuters) 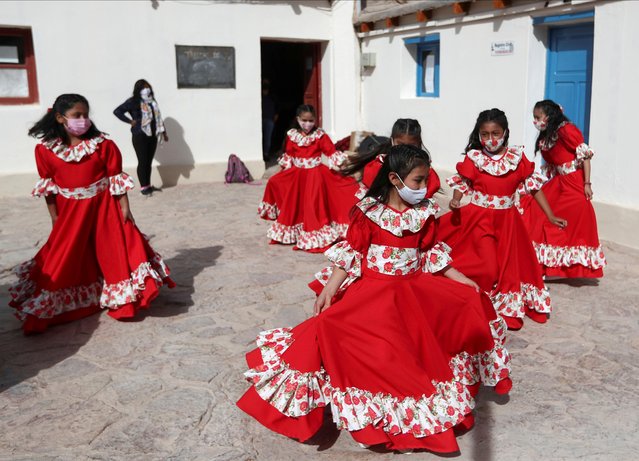 Girls practice a dance before performing at a park, in Purmamarca, Jujuy, Argentina on August 14, 2021. (Photo by Agustin Marcarian/Reuters) 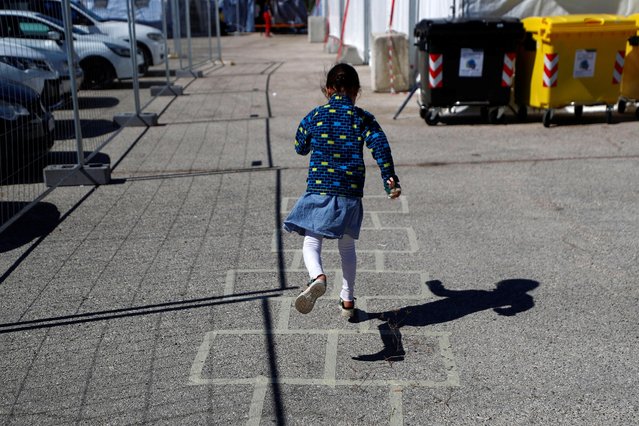 An Afghan evacuee plays at a holding centre run by the Italian Red Cross, where she carries out a quarantine with others, in Avezzano, Italy, August 30, 2021. (Photo by Guglielmo Mangiapane/Reuters) 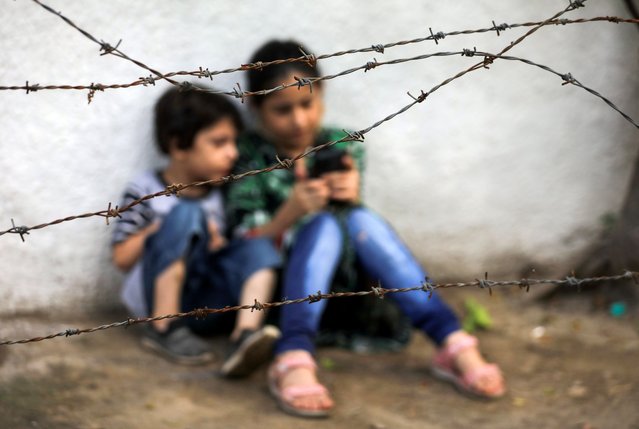 Afghan nationals are seen behind barbed wire as others protest outside the United Nations High Commissioner for Refugees (UNHCR) office to urge the international community to help Afghan refugees, in New Delhi, India, August 27, 2021. (Photo by Anushree Fadnavis/Reuters) 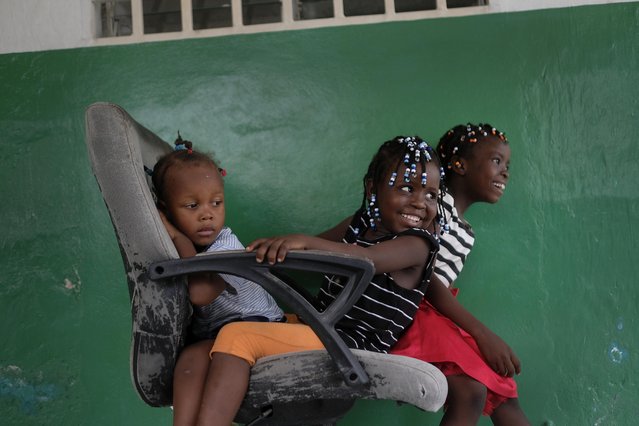 Younaika Ylet, center, plays with other girls at the Immaculate Conception Hospital, also known as the General Hospital of Les Cayes, Haiti, Monday, August 23, 2021, where her mother is being treated one week after the 7.2 magnitude earthquake. The 5-year-old, who was not injured, shares her mother's hospital bed, and they have no home to return to, after the quake brought down their house in Camp-Perrin, killed Younaika's grandfather and two other relatives and seriously injured her uncle. (Photo by Matias Delacroix/AP Photo) 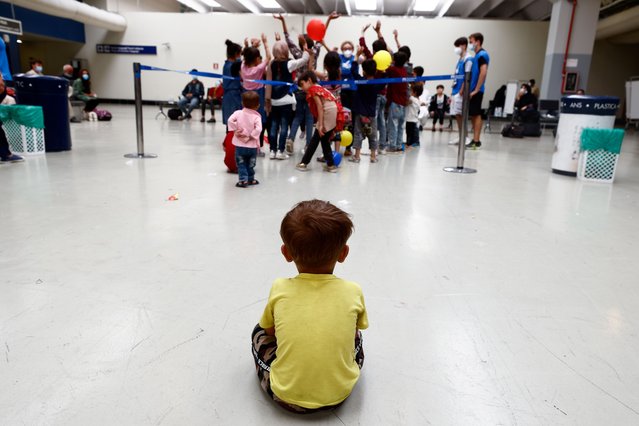 A child sits on the floor at Fiumicino Airport, as Afghan evacuees arrive in Italy following their journey from Kabul, in Rome, Italy, August 24, 2021. (Photo by Guglielmo Mangiapane/Reuters) People who displaced from their homes by a recent earthquake play dominoes at a tent encampment on August 20, 2021 in L'Saile, Haiti. The magnitude 7.2 earthquake last week in the southwest area of Haiti has killed over 2,000 people leaving thousands homeless and searching for food.(Photo by Joshua Lott/The Washington Post) 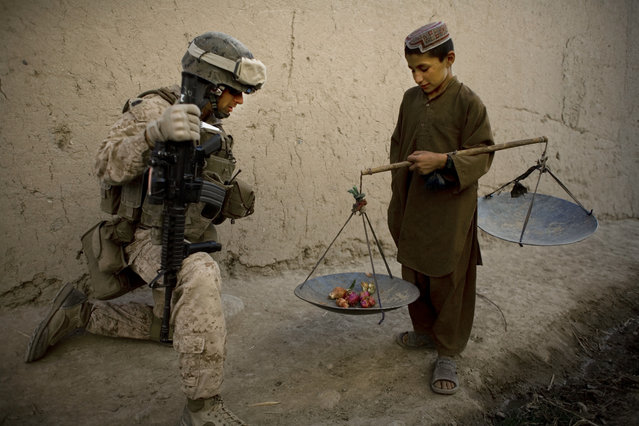 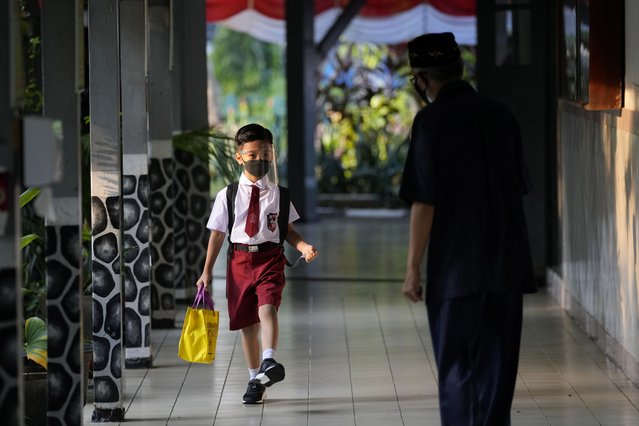 Staff greets a student during the first day of school reopening at an elementary school in Jakarta, Indonesia, Monday, August 30, 2021. Authorities in Indonesia's capital kicked off the school reopening after over a year of remote learning on Monday as the daily count of new COVID-19 cases continues to decline. (Photo by Dita Alangkara/AP Photo) 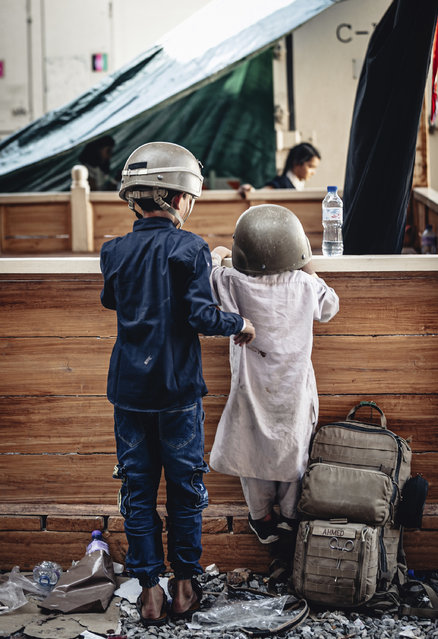 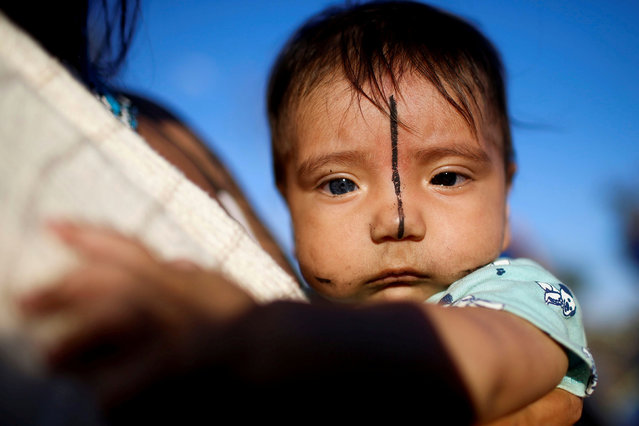 A Kayapo child looks on from his mother's lap during the camp Luta pela Vida (Struggle for Life), during a demonstration in defence of local indigenous people, in Brasilia, Brazil on August 23, 2021. (Photo by Adriano Machado/Reuters) 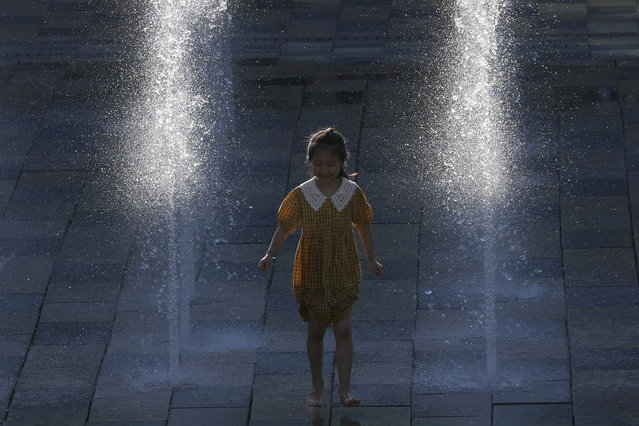