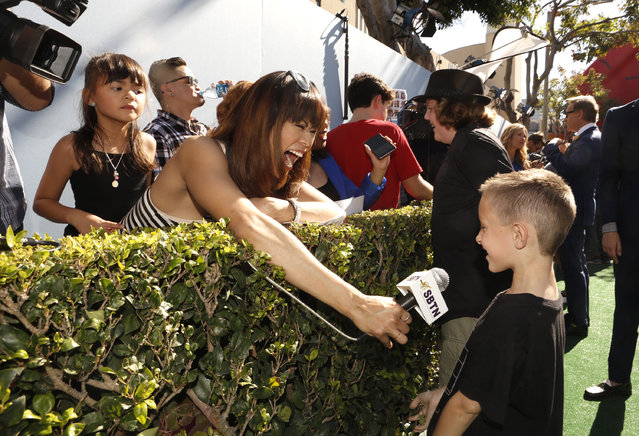 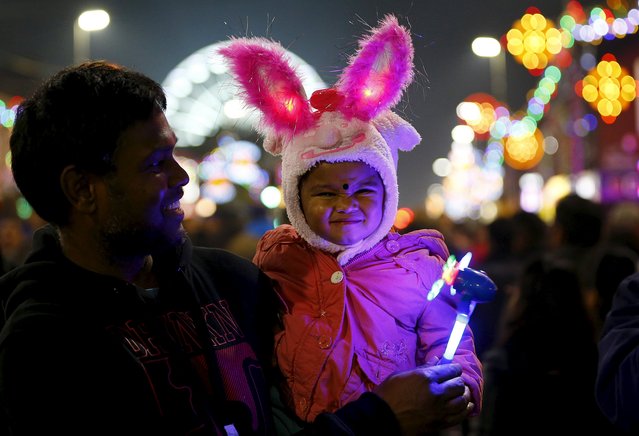 A girl reacts to the camera after the switching on of Diwali lights in Leicester, Britain, November 1, 2015. The Diwali celebration in Leicester is one of the largest in the world outside of India, with around 35,000 people attending the switch-on of the lights in the heart of the city's Asian community. (Photo by Darren Staples/Reuters) 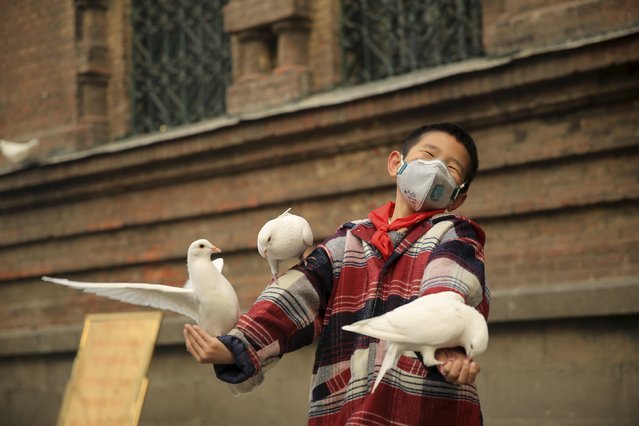 A boy wearing a mask reacts as he feeds pigeons on a hazy day in Harbin, Heilongjiang province, China, November 3, 2015. Some kindergartens and schools were closed as severe air pollution hit northeastern Chinese city of Harbin on Tuesday, local media reported. (Photo by Reuters/Stringer) 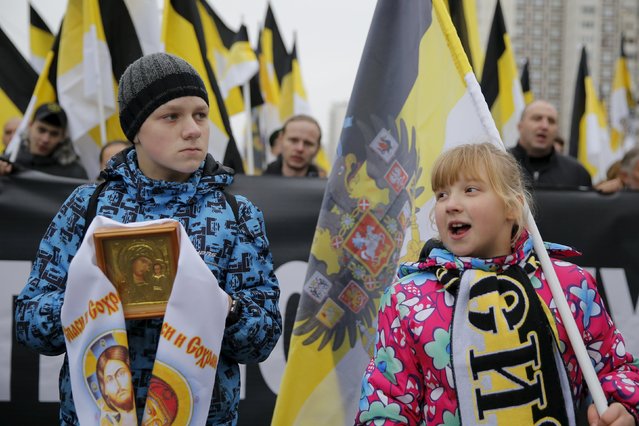 Children hold an icon and a historic flag of the Russian empire as they attend a "Russian March" demonstration on National Unity Day in Moscow, Russia November 4, 2015. Russia marks National Unity Day on November 4 to celebrate the defeat of Polish invaders in 1612. (Photo by Maxim Shemetov/Reuters) 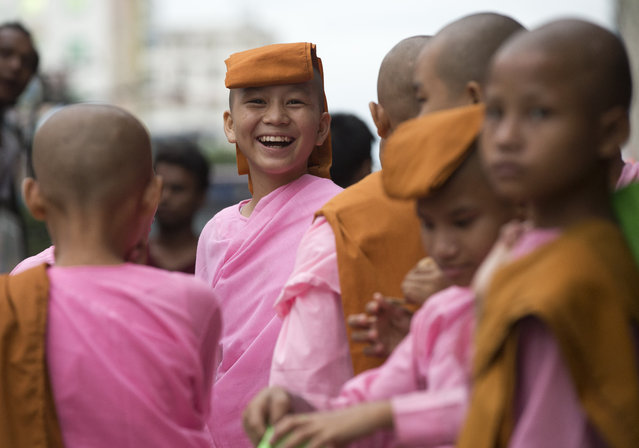 Novice Buddhist nuns line up after walking the streets to collect alms in central Yangon, Myanmar, Tuesday, November 10, 2015. Myanmar was trapped in a post-election limbo Tuesday with official results barely trickling in, although opposition leader Aung San Suu Kyi's party claimed a victory massive enough to give it the presidency and loosen the military's grip on the country. (Photo by Mark Baker/AP Photo) 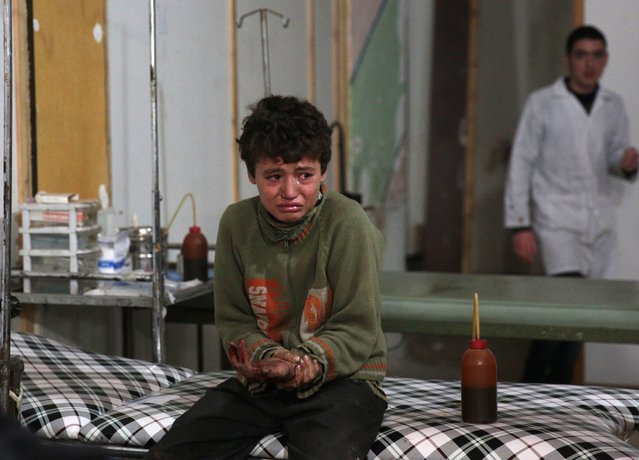 A wounded Syrian boy cries at a makeshift hospital following a reported air strike by government forces in the rebel-held area of Douma, east of the capital Damascus, on November 18, 2015. (Photo by Abd Doumany/AFP Photo) 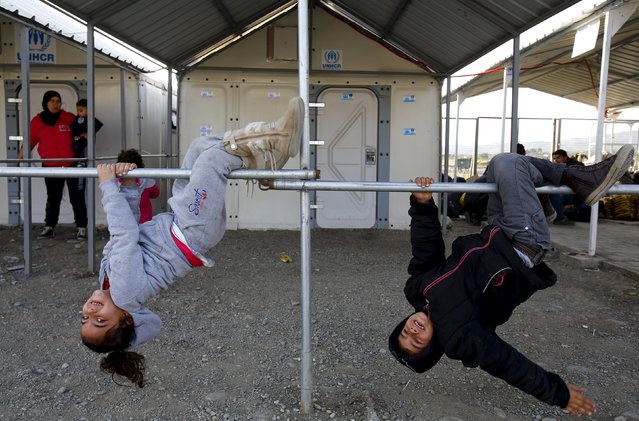 Migrants play as they wait for transport to Serbia at a transit camp after entering the country by crossing the border with Greece in Gevgelija, Macedonia, November 10, 2015. (Photo by Ognen Teofilovski/Reuters) 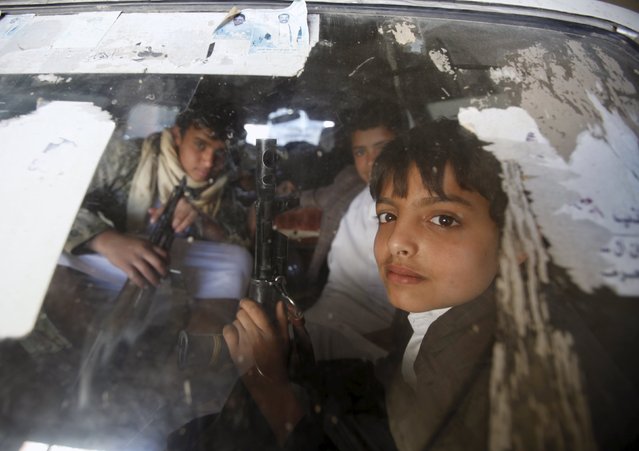 Boys hold rifles as they ride a car to a demonstration against Saudi-led strikes in Yemen's capital Sanaa November 20, 2015. (Photo by Khaled Abdullah/Reuters) 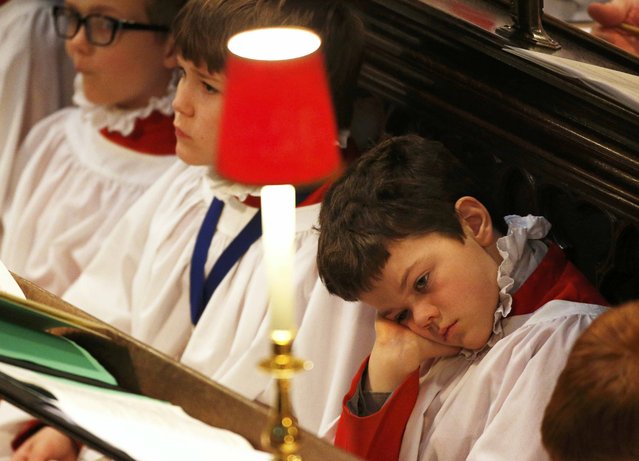 A choirboy sits in the pews during a service for the inauguration of the Tenth General Synod, at Westminster Abbey in London, Britain November 24, 2015. (Photo by Peter Nicholls/Reuters) 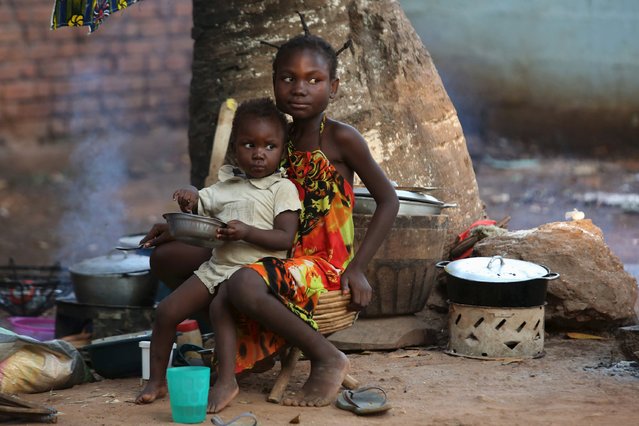 Children have their meal in a camp for internally displaced people on the grounds of the Saint Sauveur church in the capital Bangui, Central African Republic, November 25, 2015. (Photo by Siegfried Modola/Reuters) 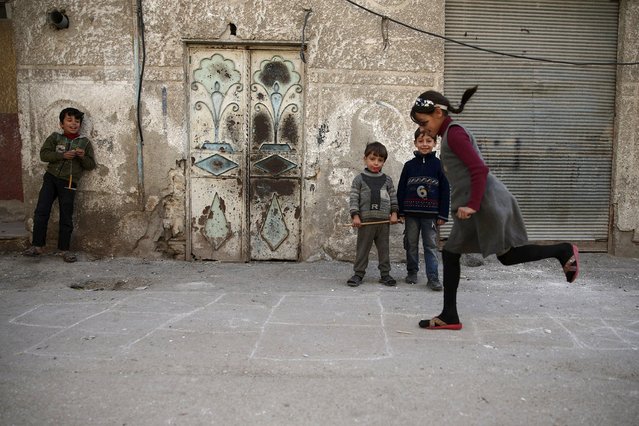 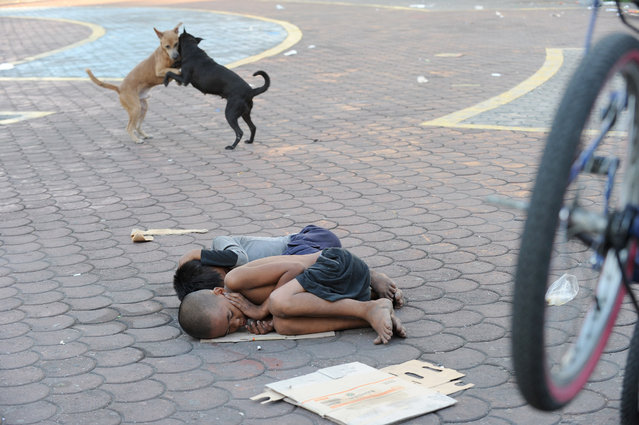 This photo taken November 10, 2015 shows homeless street children sleeping in a park in Manila. The Philippines has swept 20,000 homeless from the streets, cancelled hundreds of flights and declared public holidays in Manila to ensure a safe and efficient summit of 21 world leaders next week, officials say. (Photo by Jay Directo/AFP Photo) 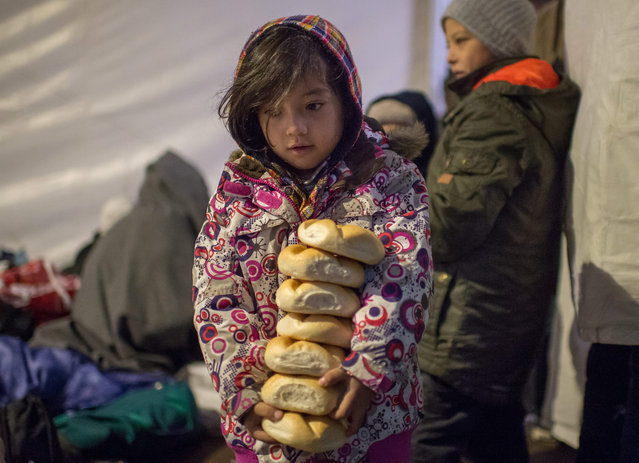 A young girl carries bread buns to her family in a heated tent which serves as emergency accommodation for arriving refugees in the town of Hanging, Austria, 03 November 2015. Around 1,000 refugees are waiting for further transportation to Germany. Temperatures have dropped below zero degrees in the area around Hanging overnight. (Photo by Peter Kneffel/EPA) 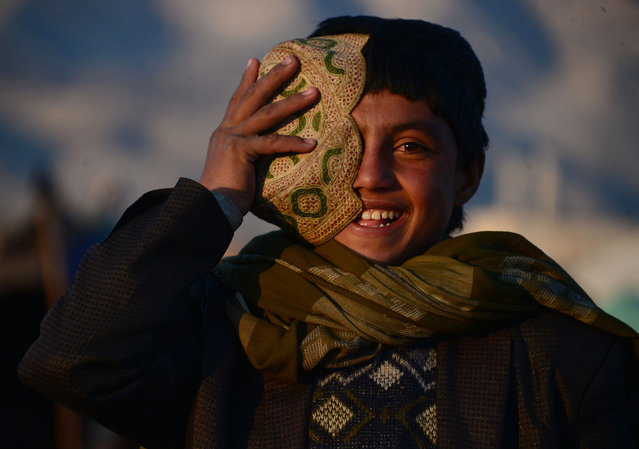 An Afghan child adjusts his hat as he stands near his tent on the outskirts of Herat on November 26, 2015. (Photo by Aref Karimi/AFP Photo) 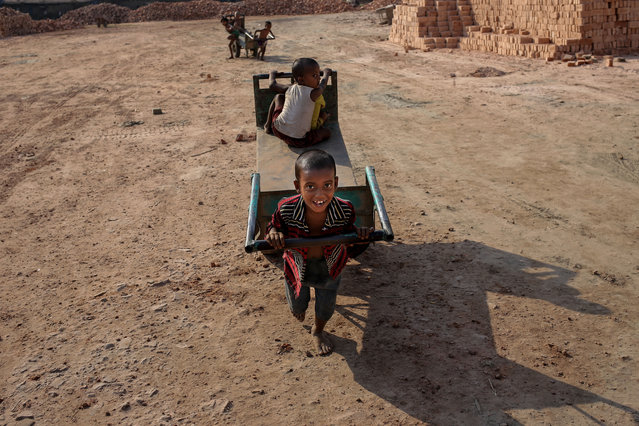 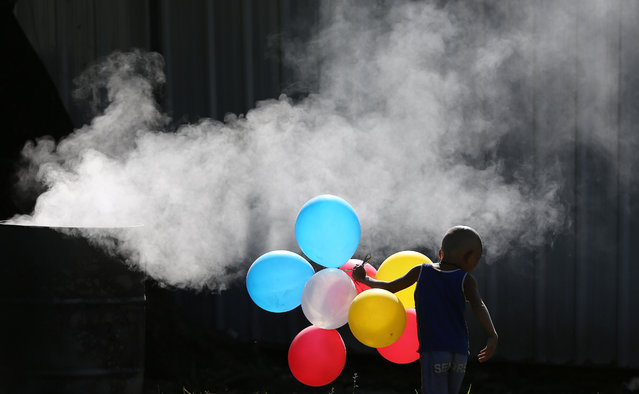 A Filipino boy plays with balloons beside a burning trash in Manila, Philippines on Sunday, November 8, 2015. (Photo by Aaron Favila/AP Photo) 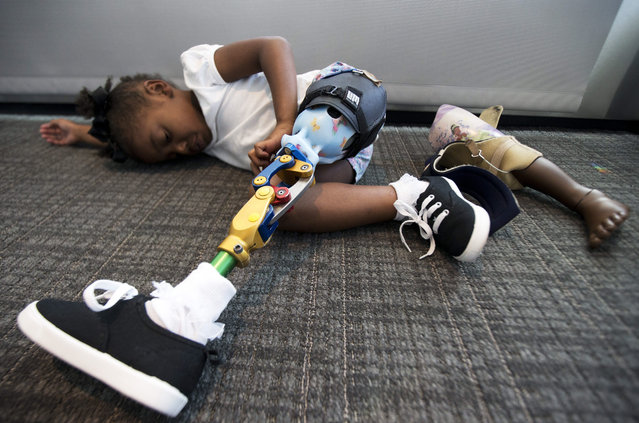 Miyah Williams, 3, wearing her prosthetic leg, rests in Washington, Friday, October 23, 2015, at a meeting on the need for new pediatric medical devices hosted by Children's National Health System. Miyah struggled with a painful and hard-to-move socket attaching her prosthesis until last August, when she received a new softer and more flexible kind. Miyah's old prosthesis lays on the floor. (Photo by Manuel Balce Ceneta/AP Photo) 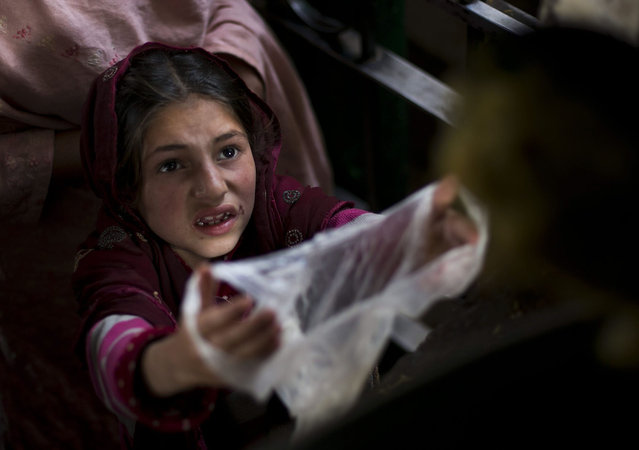 A Pakistani poor girl extends her plastic bag to receive free food for her family, distributed at local shrine in suburbs of Islamabad, Pakistan, Friday, November 20, 2015. Pakistan also observed Universal Children's Day, which is marked annually by the United Nations with other nations. (Photo by B.K. Bangash/AP Photo) 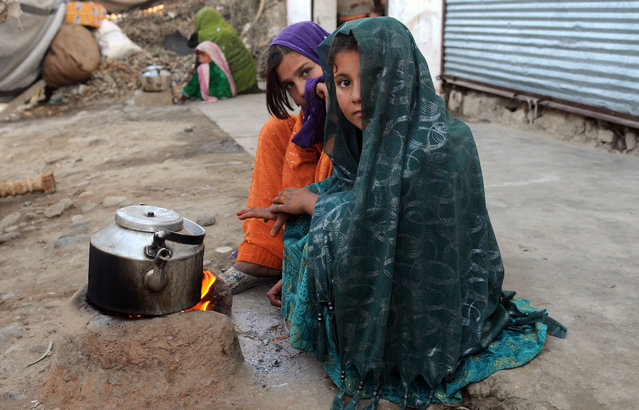 Internally displaced girls warm up by a stove after their family left their village in the Achin district of Afghanistan, due to clashes between the Islamic State group and other insurgent groups, on the outskirts of Jalalabad, east of Kabul, Sunday, November 22, 2015. (Photo by Mohammad Anwar Danishyar/AP Photos) 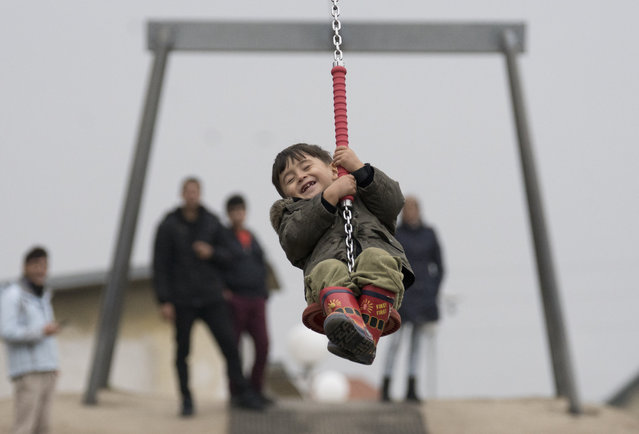 A young asylum seeker plays around in a processing centre in Traiskirchen, Austria, October 29, 2015. (Photo by Joe Klamar/AFP Photo) 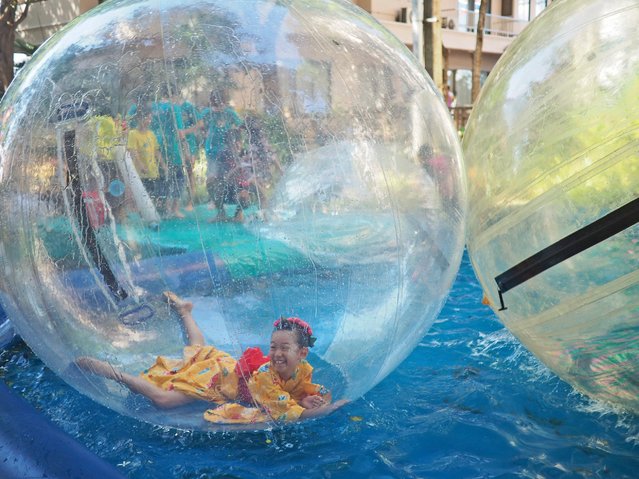 A girl in a kimono laughs as she rides on water in an inflatable plastic bubble at a school fair outside Bangkok, Thailand, Saturday, November 21, 2015. (Photo by Ted Anthony/AP Photo) 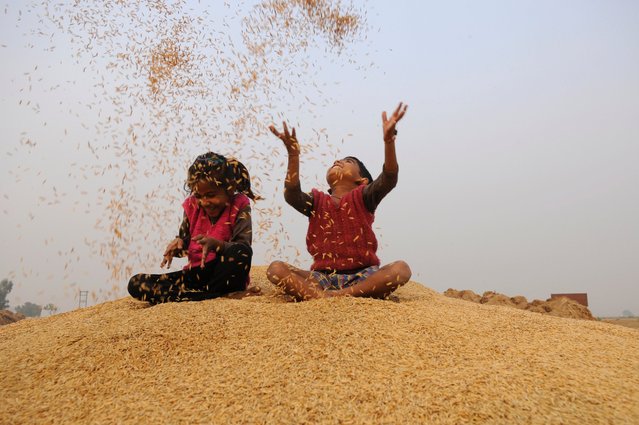 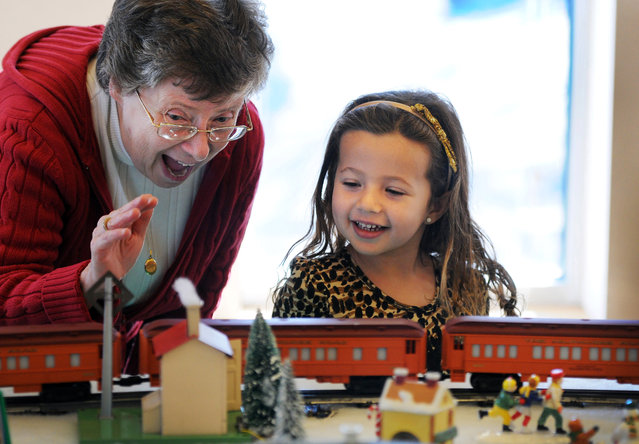 Diane Adler, Trustee from the Mahwah Museum, shares a moment with Ella Ledbery (age 4) of Mahwah as they watch giant O gauge electric trains in the Children's Library in Mahwah Library. The trains were donated by Mr. and Mrs. Margolis owners of Kinchley's Tavern to the Mahwah Museum in Mahwah, N.J., Sunday, November 8, 2015. (Photo by Mitsu Yasukawa/The Record of Bergen County via AP Photo) 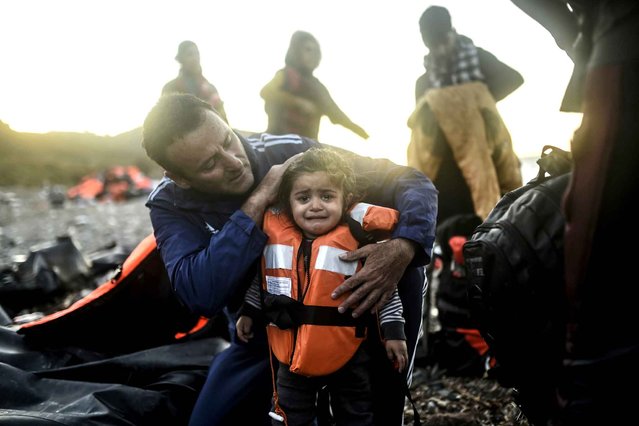 A Greek doctor tries to comfort a child after migrants and refugees arrived on the shores of the Greek island of Lesbos after crossing the Aegean Sea from Turkey on November 12, 2015. European Union and African leaders on November 12 approved a 1.8-billion-euro action plan they hope will help stem an unprecedented and politically explosive flow of migrants across the Mediterranean. (Photo by Bulent Kilic/AFP Photo)
Edit Del
28 Nov 2015 08:06:00, post received 0 comments
Publication archive:
←   →
Popular tags:
All tags
Last searches: