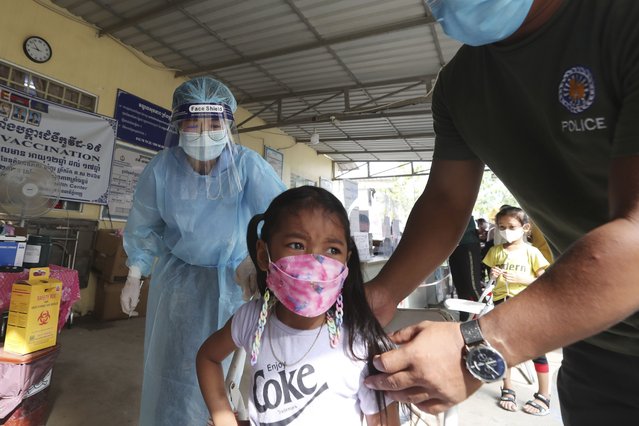 A young girl, center, receives a shot of the Sinovac's COVID-19 vaccine at a Krang Thnong health center outside Phnom Penh, Cambodia, Monday, November 1, 2021. Cambodia on Monday began vaccinating 5-year-old children against the coronavirus as its leader announced the official reopening of the country, including the phased reentry of tourists. (Photo by Heng Sinith/AP Photo) 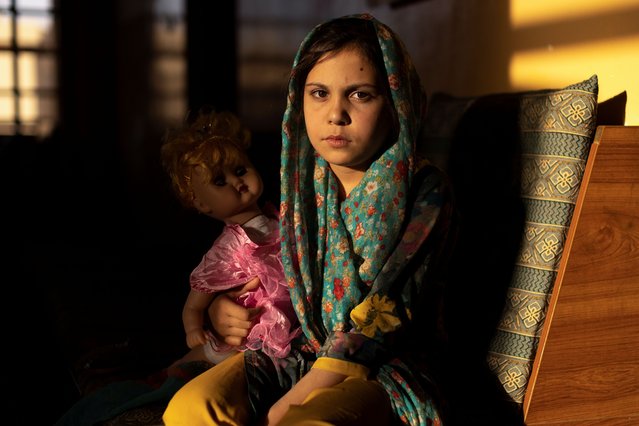 Samira, 9, poses for a photo in the living room at her orphanage, in Kabul, Afghanistan, October 10, 2021. Samira wants to be a doctor when she grows up. “I want to serve my homeland and save others from disease, and I also want other girls to study so that they become a doctor like me in the future”, she says with a sheepish grin. Because of her age, Samira is still able to go to school outside the orphanage, and is already taking extra classes in order to get ahead. Hardship has not dented her ambition, but she also recognises that in order to achieve her goals, she may have to go abroad to study. “I am not allowed to study here”. (Photo by Jorge Silva/Reuters) 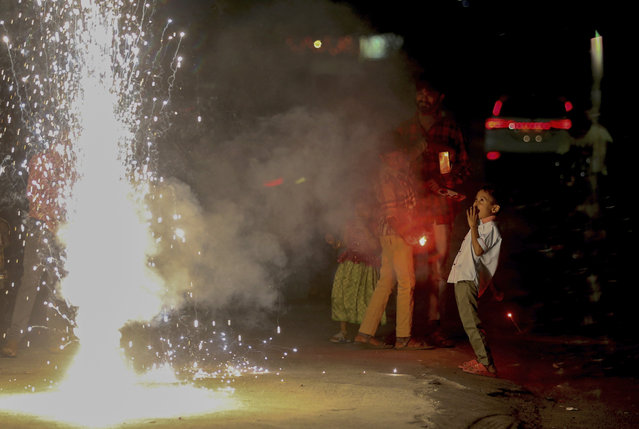 Children play with firecrackers during Diwali celebrations in Hyderabad, India, Thursday, November 4, 2021. Millions of people across Asia are celebrating the Hindu festival of Diwali, which symbolizes new beginnings and the triumph of good over evil and light over darkness. Diwali, the festival of lights, is one of Hinduism's most important festivals dedicated to the worship of Lakshmi, the Hindu goddess of wealth. (Photo by Mahesh Kumar A./AP Photo) 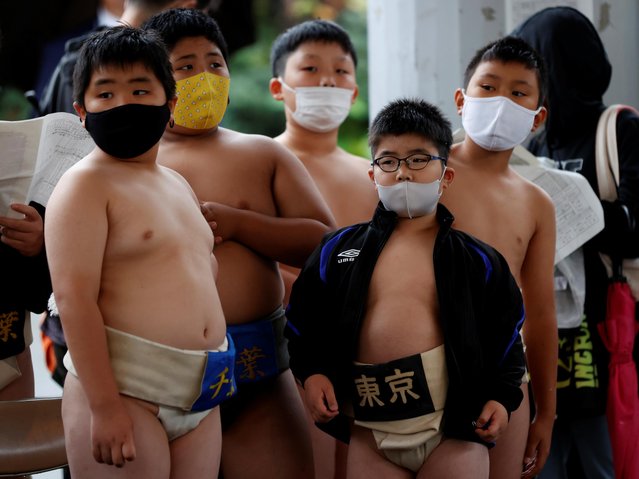 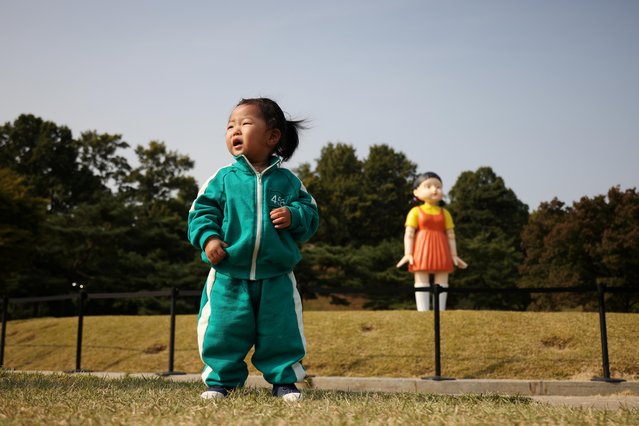 A girl wearing a costume of Netflix series “Squid Game” poses for photographs in front of a giant doll named “Younghee” from the series on display at a park in Seoul, South Korea, October 26, 2021. (Photo by Kim Hong-Ji/Reuters) 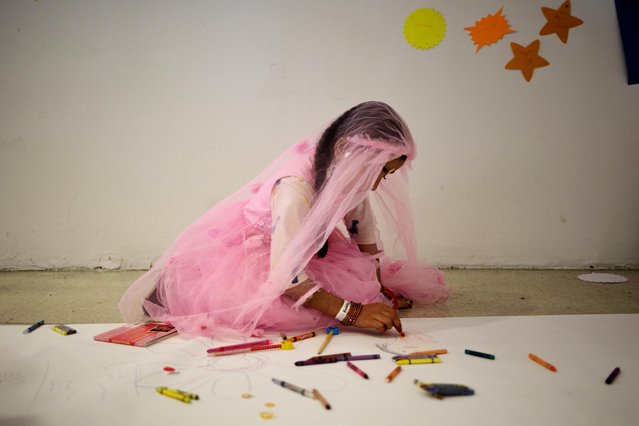 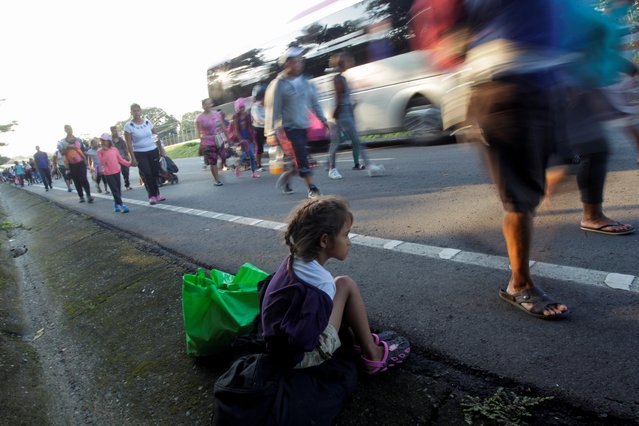 A migrant girl rests from walking as she takes part in a caravan with her father heading to Mexico City, in Mapastepec, Mexico on November 1, 2021. (Photo by Daniel Becerril/Reuters) 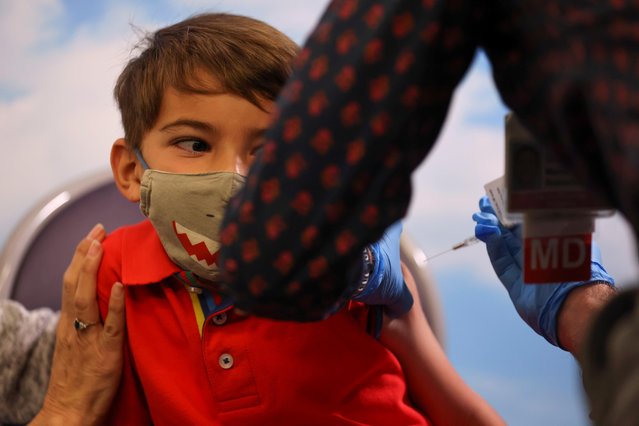 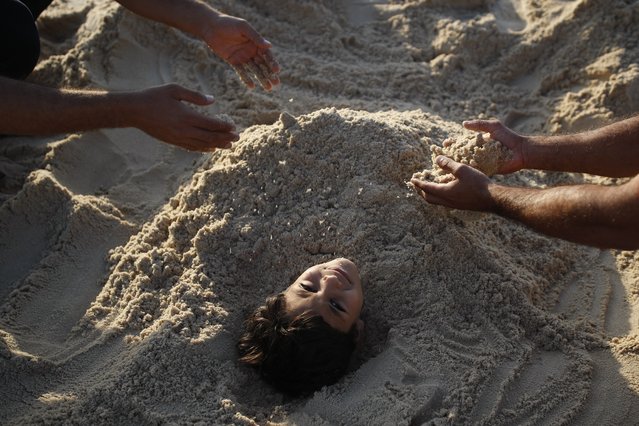 Palestinians play covering a boy with sand on the beach of Gaza City, Friday, September 24, 2021. (Photo by Khalil Hamra/AP Photo) 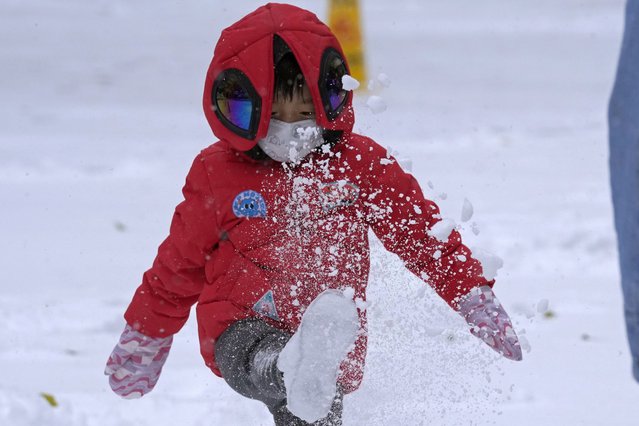 A child kicks up fresh snow in Beijing, China, Sunday, November 7, 2021. An early-season snowstorm has blanketed much of northern China including the capital Beijing, prompting road closures and flight cancellations. (Photo by Ng Han Guan/AP Photo) 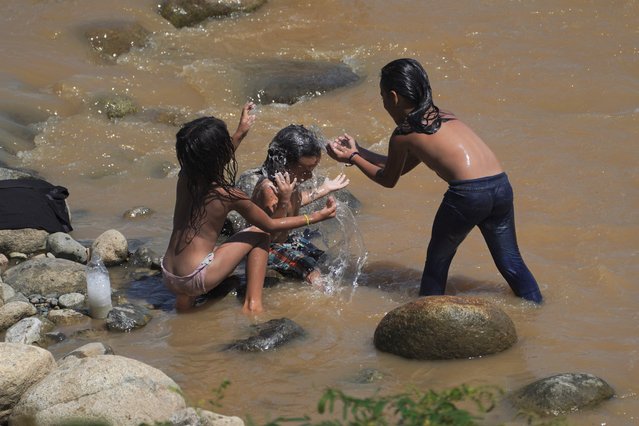 Migrants bathe in the Huixtla River, Chiapas state, Mexico, Tuesday, October 26, 2021, as they take a day of rest before continuing their trek across southern Mexico to the U.S. border. (Photo by Marco Ugarte/AP Photo) 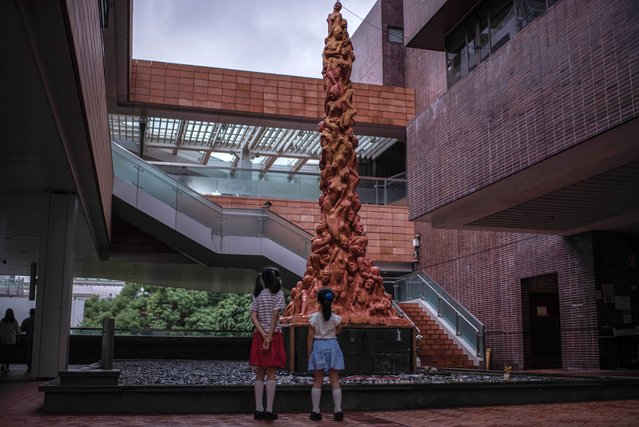 Two children look at the “Pillar of Shame” statue at the Hong Kong University campus on October 15, 2021 in Hong Kong, China. Hong Kong University demanded that a now-disbanded pro-democracy alliance remove the artwork, an eight-metre tall monument to the Tiananmen Square Massacre by Danish artist Jens Glaschiot, after it has stood on the grounds of the campus for 24 years, local news sources reported. The statue is an iconic art piece, one of several by the artist placed around the world commemorating similar events. (Photo by Louise Delmotte/Getty Images) 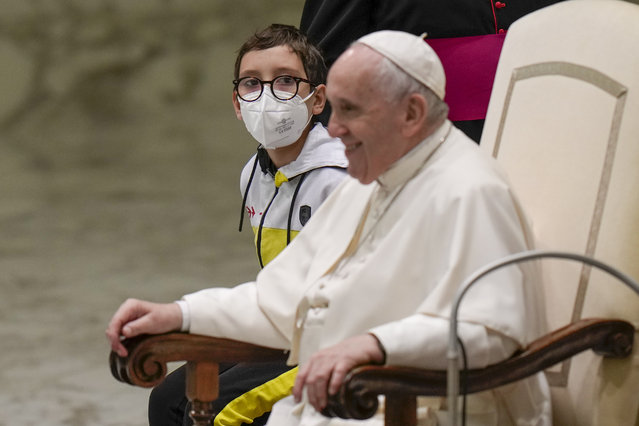 Pope Francis talks with a 10-year-old boy Paolo Junior, family name not available, after he unexpectedly walked up to him at the beginning of a weekly general audience in the Pope Paul VI hall at the Vatican, Wednesday, October 20, 2021. (Photo by Alessandra Tarantino/AP Photo) 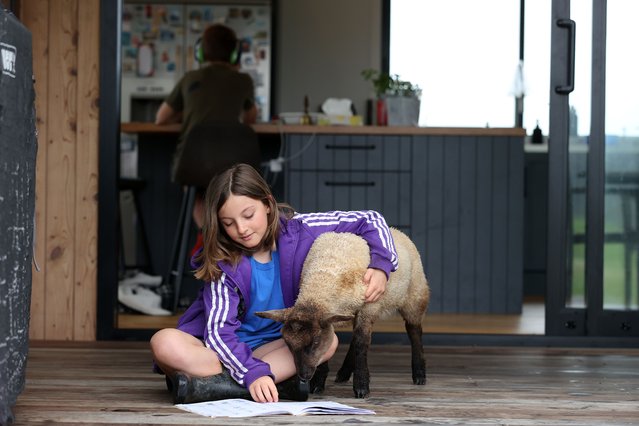 Jessica Matthews, 10 takes a break from online learning to play with her pet lamb at home in Warkworth on October 26, 2021 in Auckland, New Zealand. (Photo by Fiona Goodall/Getty Images) 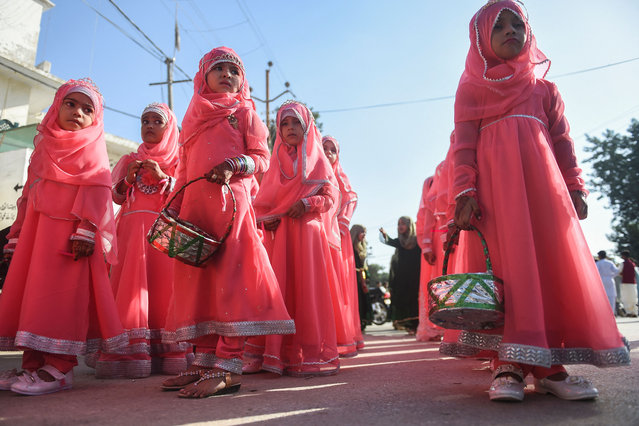 Children take part in a rally organised to celebrate Eid-e-Milad-un-Nabi, which marks the birth anniversary of Prophet Muhammad, in Karachi, Pakistan on October 19, 2021. (Photo by Rizwan Tabassum/AFP Photo) 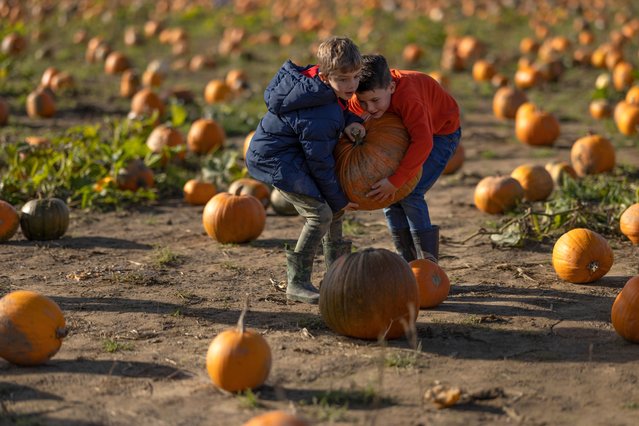 Young lads grapple with a large pumpkin at Tulleys farm on October 22, 2021 in Crawley, England. Tulleys Farm's annual “Pick Your Own Pumpkins” event takes place over 60 acres of land throughout the month of October, with approximately 450,000 pumpkins available. Tickets for the event can be purchased using cryptocurrency. (Photo by Dan Kitwood/Getty Images) 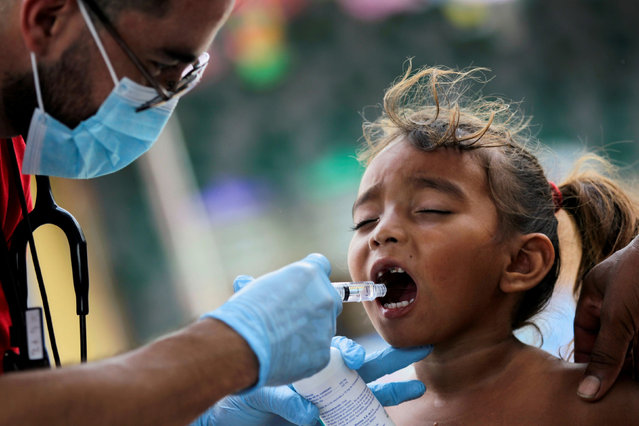 A migrant girl sick with fever receives medicine during a rest day as she and her parents take part in a caravan heading to Mexico City, in Mapastepec, Mexico October 31, 2021. (Photo by Daniel Becerril/Reuters) 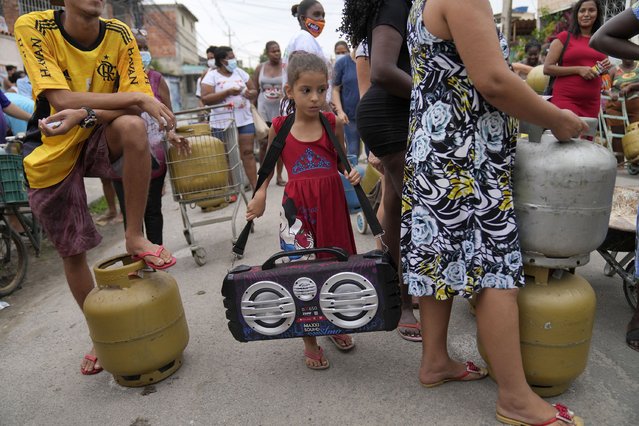 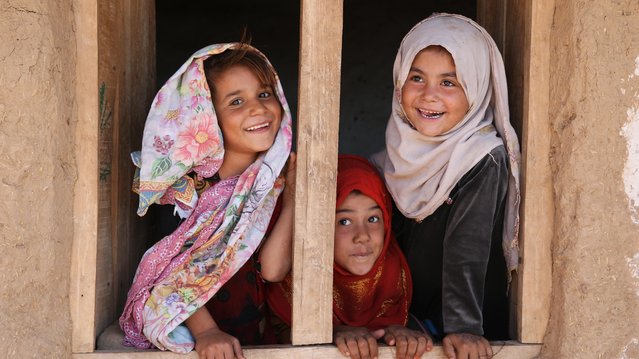 Afghan children pose at Basti Refugee Camp in Islamabad, Pakistan on October 27, 2021. More than 1.4 million Afghan refugees are in the country. (Photo by Muhammed Semih Ugurlu/Anadolu Agency via Getty Images) 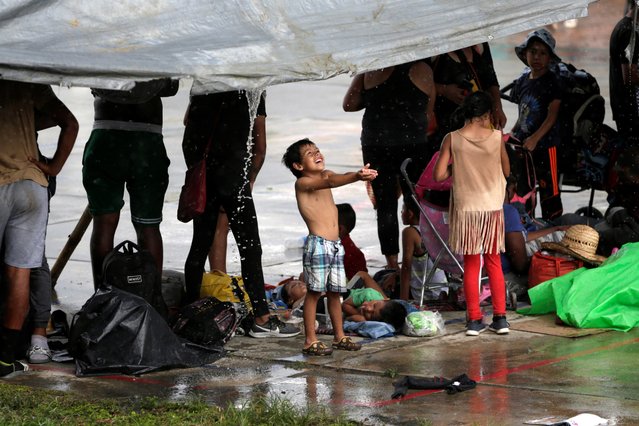