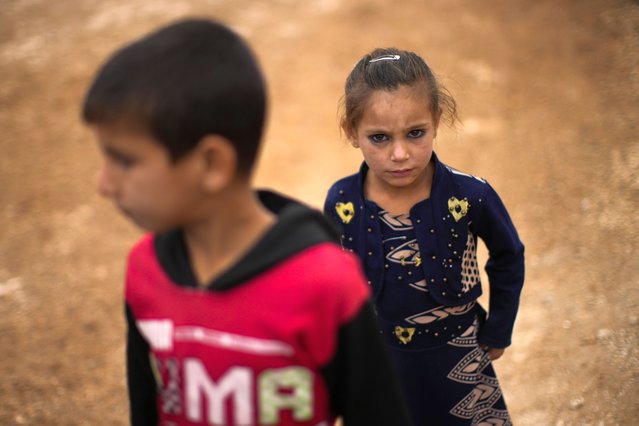 Syrian children wait for donated toys and food to be distributed in a refugee camp for displaced people supported by the Turkish Red Crescent in Sarmada, north of Idlib city, Syria, Thursday, November 25, 2021. (Photo by Francisco Seco/AP Photo) 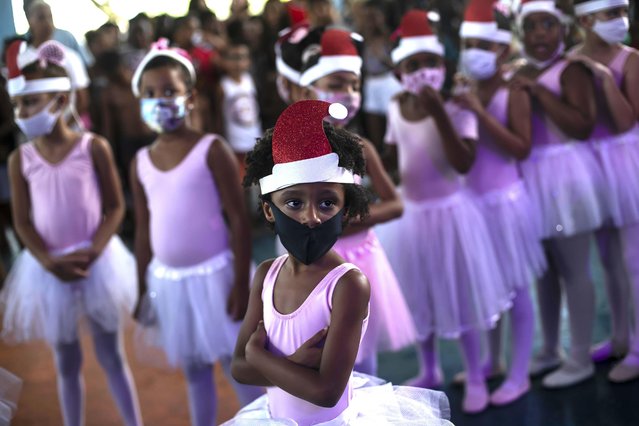 A young ballet dancer waits to perform at a Christmas celebration in the Vila OlÃ­mpica at the Vila Kennedy favela, in Rio de Janeiro, Brazil, Saturday, December 11, 2021. (Photo by Bruna Prado/AP Photo) 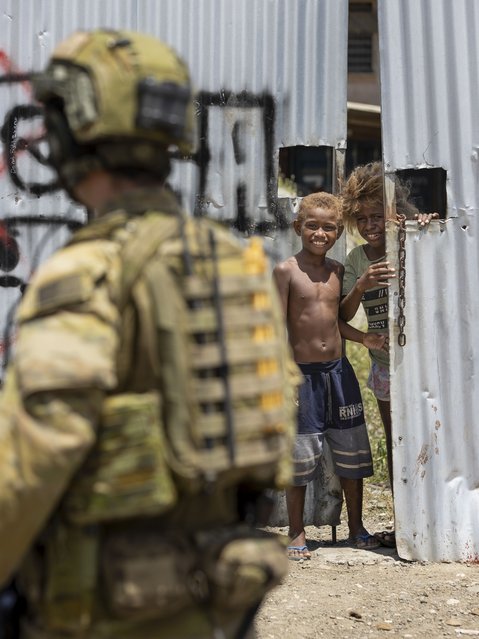 In this photo provided by the Department of Defence, Australian Army Corporal Aaron Woodham is watched by young boys during a community engagement patrol through Honiara, Solomon Islands, Saturday, November 27, 2021. Solomon Islands police have found multiple bodies in a burned-out building and arrested more than 100 people in this week's violence sparked by concerns about the Pacific nation's increasing links with China. (Photo by Cpl. Brandon Grey/Department of Defence via AP Photo) 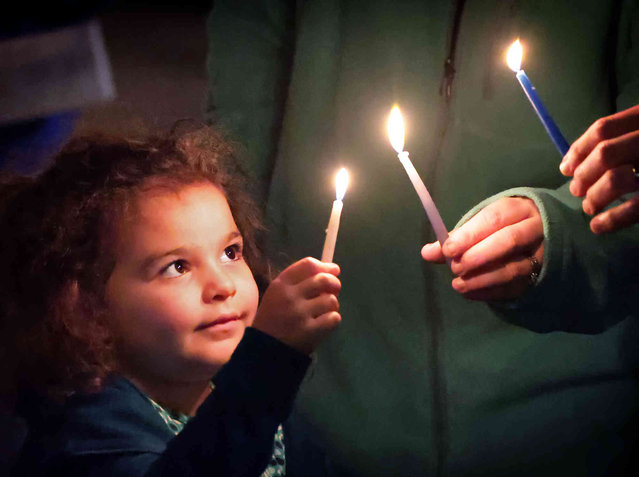 Four-year-old Riley Gillet, of Orlando, lights a candle with her family, marking the beginning of the traditional Jewish holiday of Hanukkah, during the Chabad of Greater Orlando's “Chanukah on the Park” celebration in Winter Park, Fla., late Sunday, November 28, 2021. Held at Central Park, the event included the lighting of a giant menorah, live performers, music and dancing. Jews worldwide will celebrate Hanukkah through Dec. 6. (Photo by Joe Burbank/Orlando Sentinel via AP Photo) 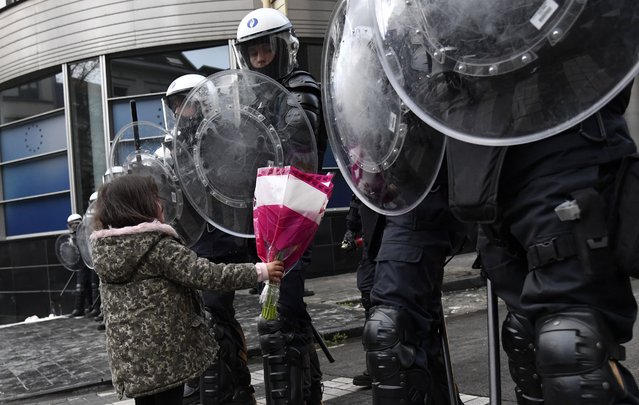 A girl gives flowers to riot police officers during a protest against coronavirus measures in Brussels, Belgium, Sunday, December 5, 2021. Hundreds of people marched through central Brussels on Sunday to protest tightened COVID-19 restrictions imposed by the Belgian government to counter the latest spike in coronavirus cases. (Photo by Geert Vanden Wijngaert/AP Photo) 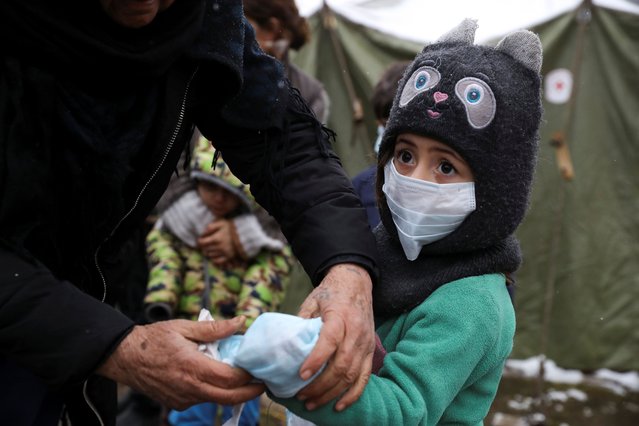 A woman covers the hand of a migrant girl with a face mask to keep her warm during snowfall at the transport and logistics centre Bruzgi on the Belarusian-Polish border, in the Grodno region, Belarus on November 27, 2021. (Photo by Kacper Pempel/Reuters) 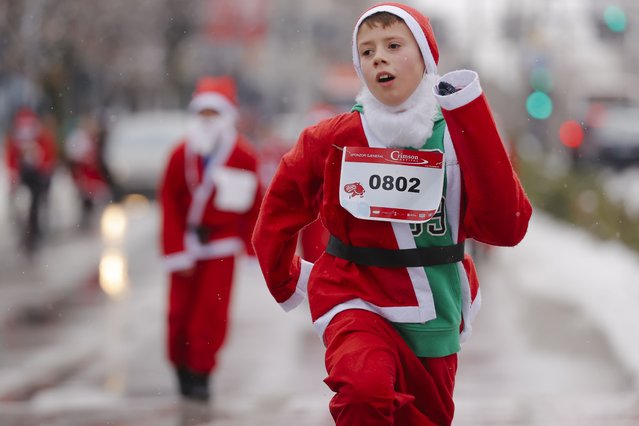 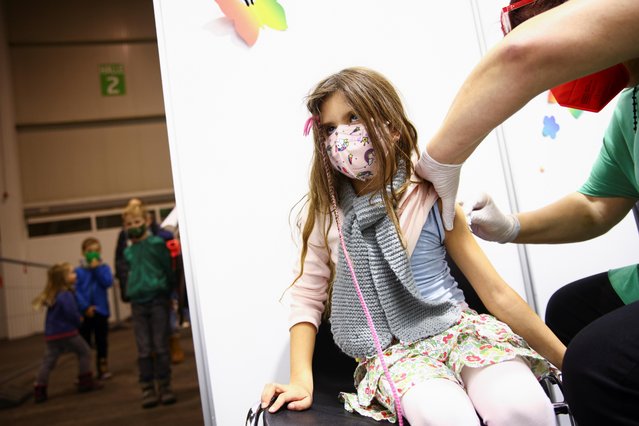 Marie, 7, receives a dose of the vaccine at a coronavirus disease (COVID-19) vaccination centre for children, in Tulln, Austria on December 1, 2021. (Photo by Lisi Niesner/Reuters) 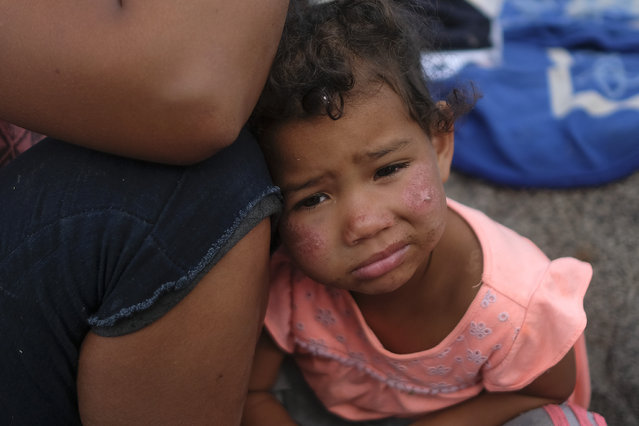 Venezuelan migrant Magdelis Alejos' daughter rests her head on her mother after the police told the family to break up the camp that they has set up on the seashore in El Morro, a neighborhood of Iquique, Chile, Sunday, December 12, 2021. (Photo by Matias Delacroix/AP Photo) 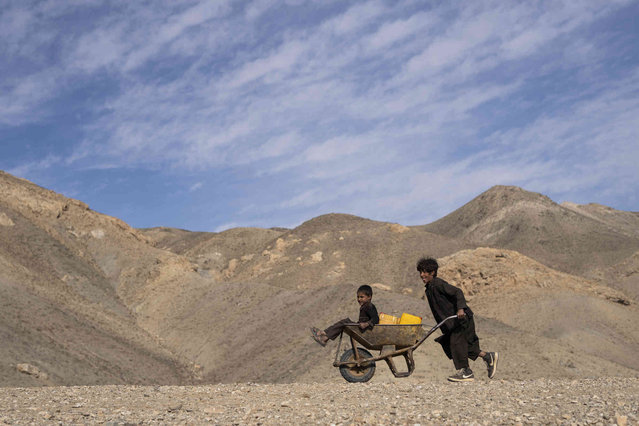 A boy pushes a wheelbarrow with canisters and his younger brother, on their way to collect water from a stagnant pool, about 3 kilometers (2 miles) from their home in Kamar Kalagh village outside Herat, Afghanistan, Friday, November 26, 2021. Afghanistan’s drought, its worst in decades, is now entering its second year, exacerbated by climate change. (Photo by Petros Giannakouris/AP Photo) 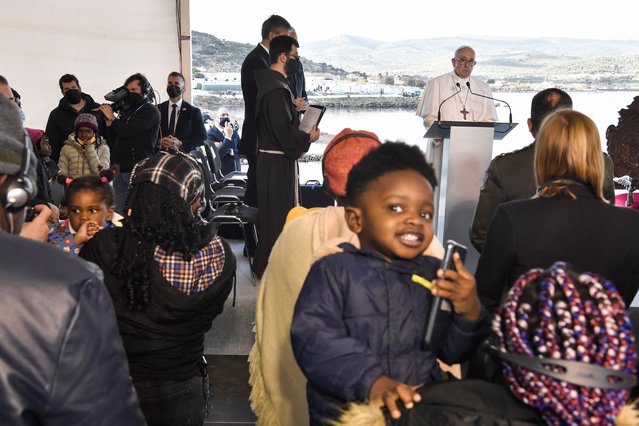 Pope Francis speaks during a ceremony at the Karatepe refugee camp, on the northeastern Aegean island of Lesbos, Greece, Sunday, December 5, 2021. Pope Francis is offering comfort migrants at a refugee camp on the Greek island of Lesbos. He is blasting what he says is the indifference and self-interest shown by Europe “that condemns to death those on the fringes”. (Photo by Louisa Gouliamaki/Pool via AP Photo) 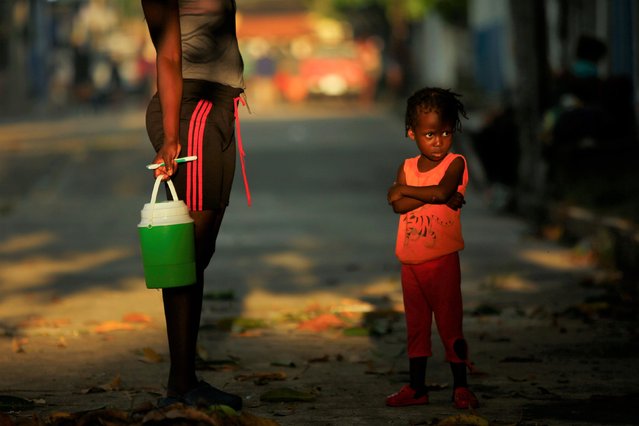 A Haitian girl and her mother wait to wash, as they take part in a caravan to the U.S. border, in Mapastepec, Mexico on November 23, 2021. (Photo by Jose Luis Gonzalez/Reuters) 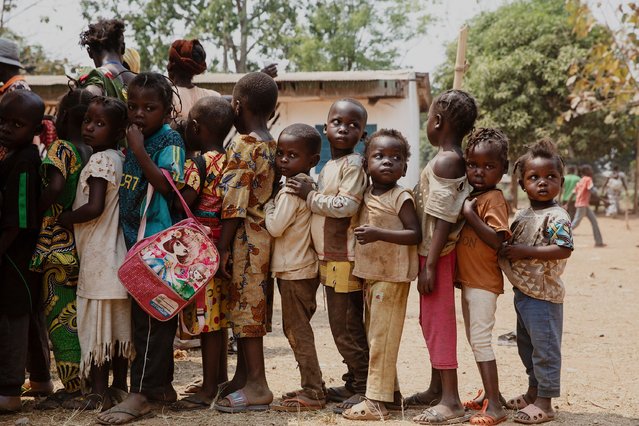 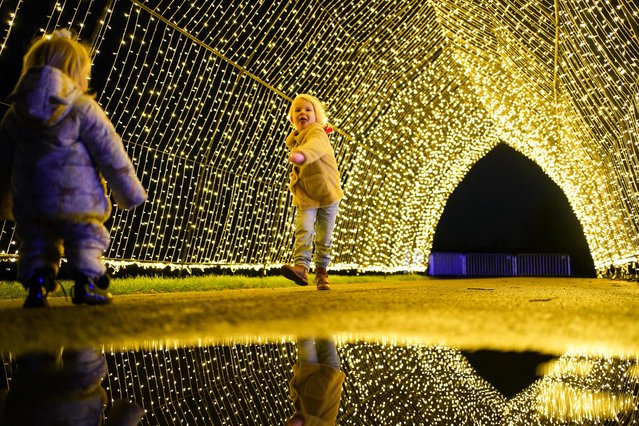 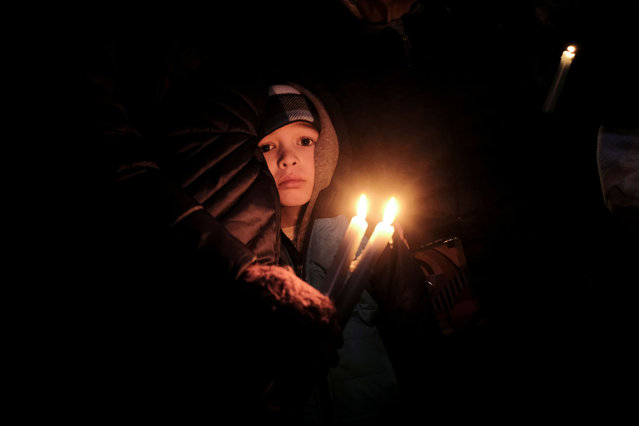 Kenosha residents attend a candlelight vigil in remembrance of the victims a day after a car plowed through a holiday parade in Waukesha, Wisconsin, U.S., November 22, 2021. (Photo by Daniel Steinle/Reuters) 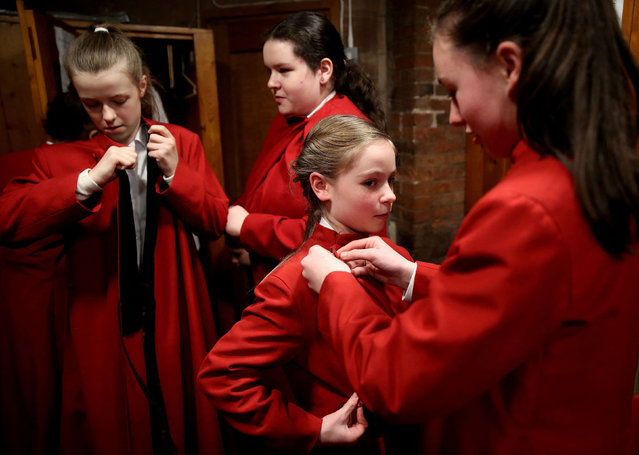 Choristers get into their robes in Lichfield Cathedral before they perform in the Christmas by Candlelight Concert, in Lichfield, Britain on December 11, 2021. (Photo by Carl Recine/Reuters) 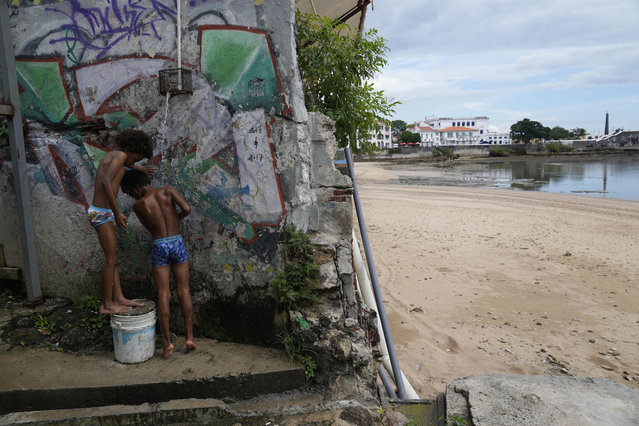 Children rinse the sand off their bodies after spending the day at the beach, during the celebration of the country's Bicentennial of its independence from Spain, at Casco Viejo neighborhood in Panama City, Sunday, November 28, 2021. (Photo by Arnulfo Franco/AP Photo) 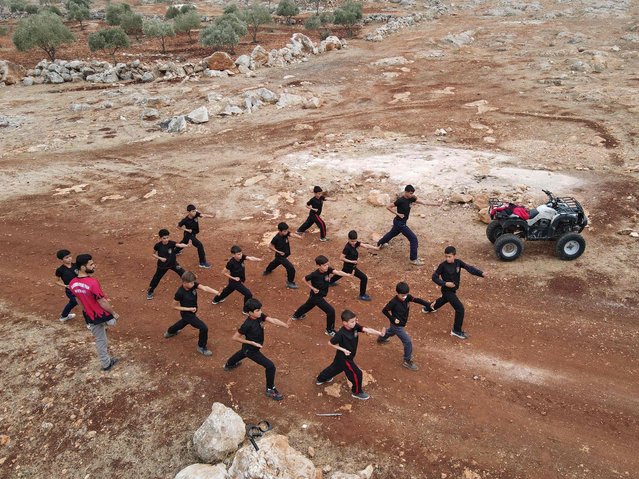 Fadel Othman, a Syrian 24-year-old amputee kung-fu teacher, and his young students perform in an area near his martial arts school in the rebel-held town of Abzimu in the western countryside of Aleppo province on November 25, 2021. Othman was hit by an artillery shell in 2015, during fighting between rebels and government forces in Aleppo. As a result, the young man who started his kung-fu training at the age of 12, braced to forgo his life-long passion. But over the course of the three years he spent in Turkey for medical treatment, he continued classes with martial arts trainers and even participated in several tournaments. (Photo by Aaref Watad/AFP Photo) 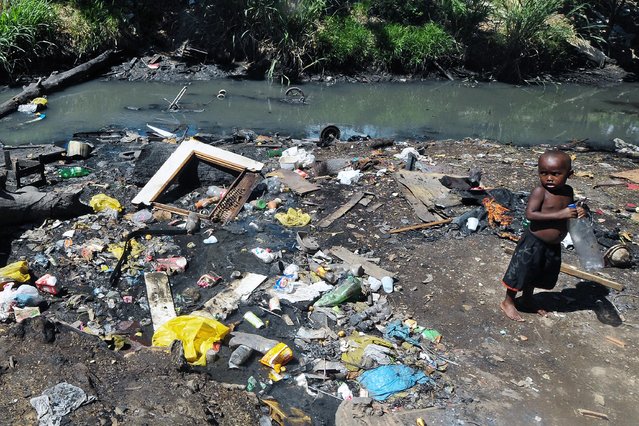 A view of people living in slums in Rio de Janeiro, Brazil on December 6, 2021. Brazil reaches 615,744 deaths in 22,147,476 confirmed cases, pandemic aggravate workers' drama. As unemployment and prices soaring with the pandemic, the population's needs are becoming more basic, the unemployed lose their homes, and form more slums beside the domestic sewage. (Photo by Fabio Teixeira/Anadolu Agency via Getty Images) 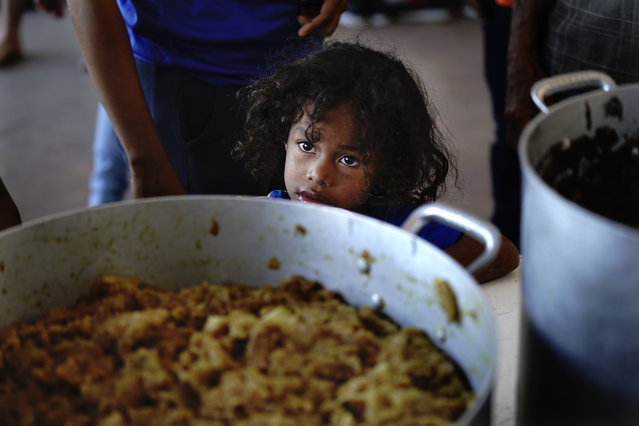