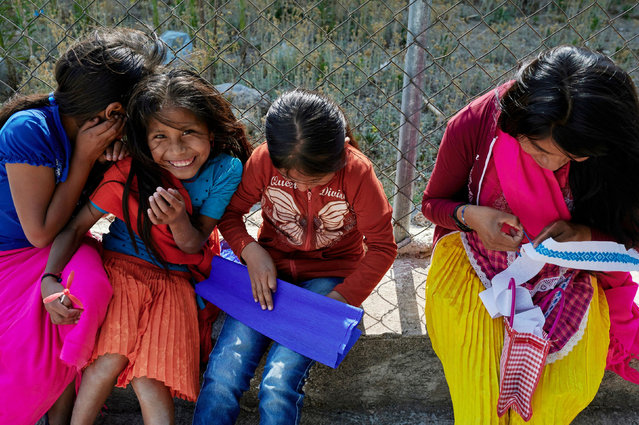 Women and children of the Nahua indigenous community of Alcozacan make pinatas, before a demonstration with children carrying replicas of toy and wooden weapons, in the town of Alcozacan, Guerrero, Mexico on April 29, 2021. (Photo by Mahe Elipe/Reuters) 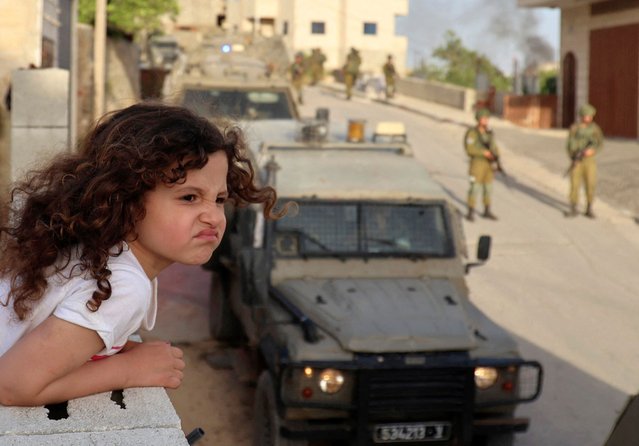 A Palestinian girl watches from the balcony of her house as Israeli soldiers conduct a security operation in the village of Aqraba, east of Nablus in the occupied-West Bank, on May 3, 2021. Suspected Palestinian gunmen carried out a drive-by shooting at a nearby junction the previous, leaving three Israeli civilians wounded, one of them in critical condition, with a manhunt underway. (Photo by Jaafar Ashtiyeh/AFP Photo) 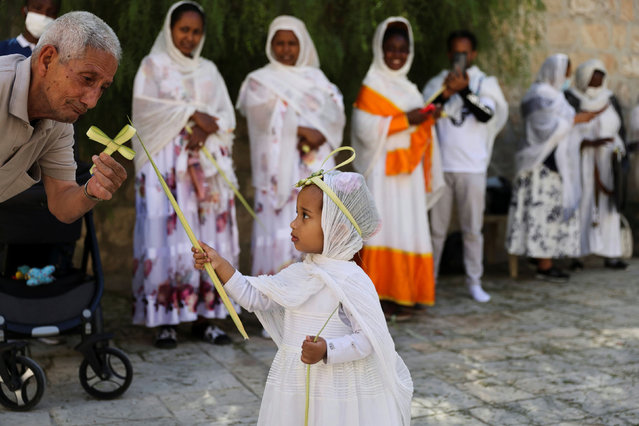 A man plays with a young girl as she holds a part of palm frond during an Orthodox Christian Palm Sunday procession, marking the start of Holy Week that ends on Easter Sunday, amid eased coronavirus (COVID-19) restrictions, at the Ethiopian section in the Church of the Holy Sepulchre in Jerusalem's Old City on April 25, 2021. (Photo by Ronen Zvulun/Reuters) 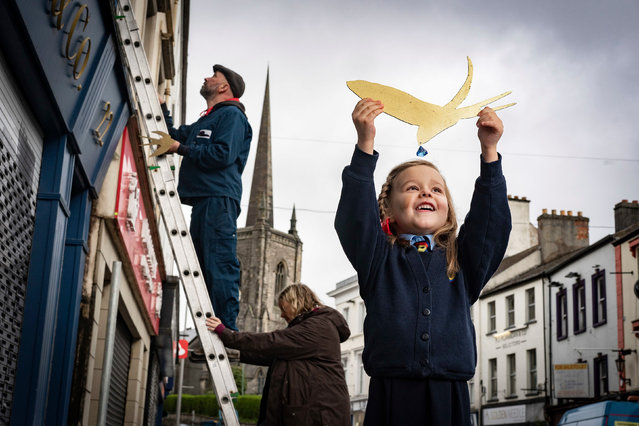 Thea Johnston of Enniskillen integrated primary school helps the artists Simon Carman and Helen Sharp as they begin the installation of 150 swallows in gold leaf in the Northern Irish town, to mark the launch of a new literary tourism initiative on May 11, 2021. (Photo by Brian Morrison/PA Wire Press Association) 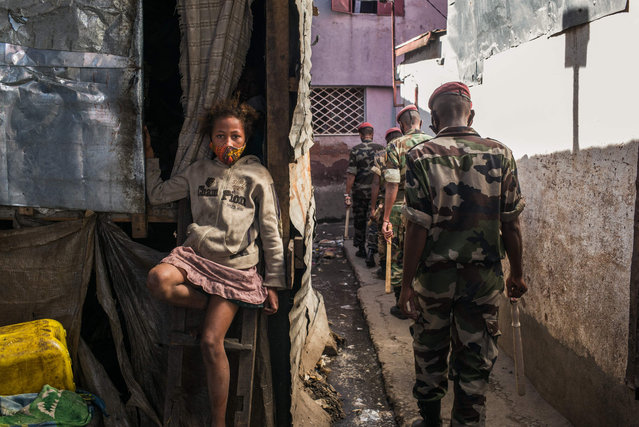 A child sit with her protective mask across her mouth and nose as members of the army patrol the streets of Antananarivo ordering citizens to go home as the Malagasy authorities declared a total weekend lockdown in the capital on April 24, 2021, to avoid the proliferation of Covid-19 which has caused many deaths in recent weeks. Madagascar said on April 23, 2021 it would receive a first lot of Covid-19 vaccines soon to fight a second wave that has overwhelmed health facilities. The Indian Ocean island nation is struggling with burgeoning infections with nearly 9,900 cases recorded over the past month, of which at least 194 have been fatal. (Photo by Rijasolo/AFP Photo) 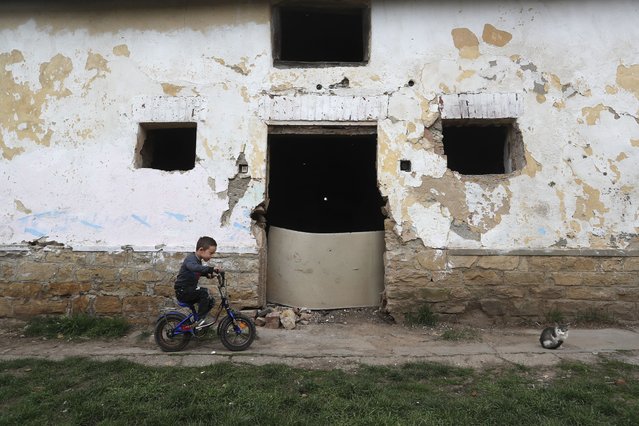 Milan Bastyur, a 4 year old Hungarian Roma child, rides a bike outside his family's home in Bodvaszilas, Hungary, Monday, April 12,2021. Many students from Hungary's Roma minority do not have access to computers or the internet and are struggling to keep up with online education during the pandemic. Surveys show that less than half of Roma families in Hungary have cable and mobile internet and 13% have no internet at all. (Photo by Laszlo Balogh/AP Photo) 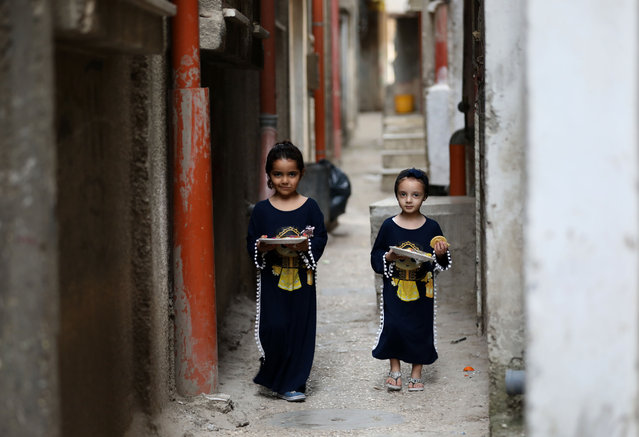 Girls walk in an alley in Balata refugee camp near the West Bank city of Nablus, during the fasting month of Ramadan, on April 20, 2021. (Photo by Chine Nouvelle/SIPA Press/Rex Features/Shutterstock) 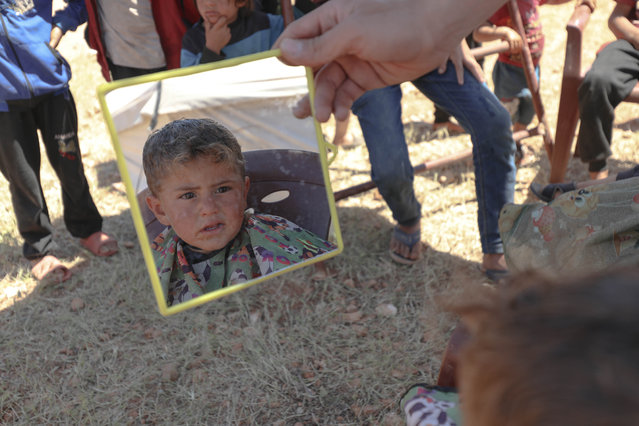 Syrian child looks his hairstyle in a hand mirror as volunteer barbers give free haircuts to children who escaped from the attacks of the Assad regime and settled in makeshift tents, ahead of the upcoming Eid al-Fitr in Idlib, Syria on May 12, 2021. (Photo by Izzettin Kasim/Anadolu Agency via Getty Images) 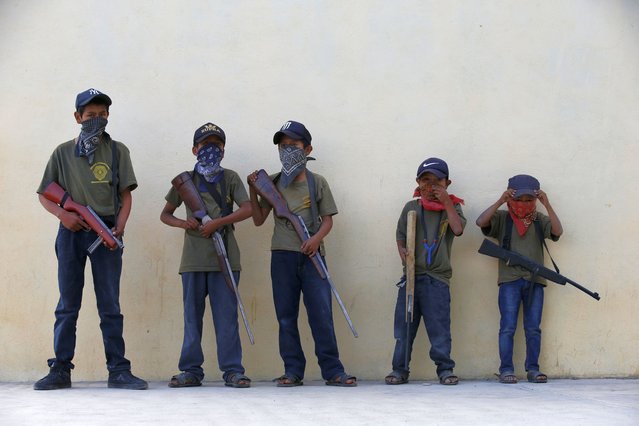 Children hold their training weapons, some real and some fake, during a display for the media designed to attract the federal government's attention to the dangers of organized crime that their town negotiates daily in Ayahualtempa, Guerrero state, Mexico, Wednesday, April 28, 2021. International organizations have condemned the “recruitment” of children and warned of the effects. (Photo by Marco Ugarte/AP Photo) 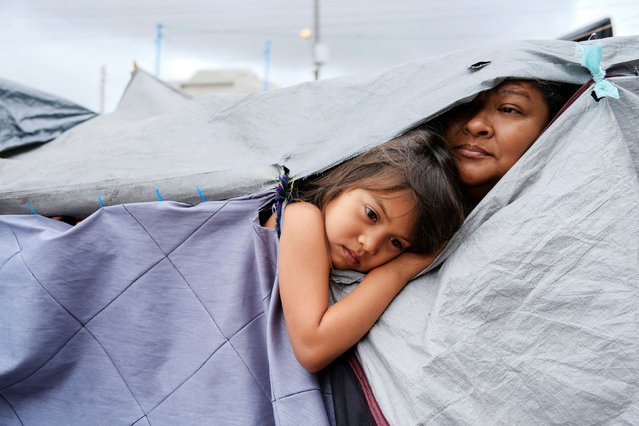 Honduran migrants Kami, 5, and her aunt Mariana listen as other migrants discuss hygiene norms within the migrant camp, at a makeshift camp at the El Chaparral border port of entry with the U.S., in Tijuana, Mexico on April 22, 2021. (Photo by Toya Sarno Jordan/Reuters) 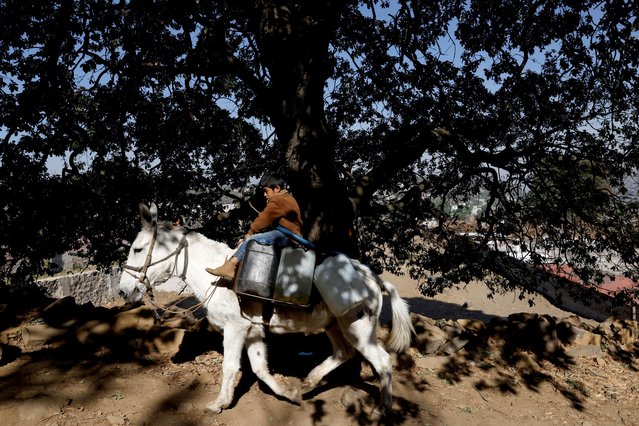 Angelito rides his donkey with water tanks to take to his family for daily use as Mexico City and the metropolitan area runs out of water as drought takes hold of the city of almost 22 million people in the municipality of Xochimilco in Mexico City, Mexico on April 19, 2021. (Photo by Carlos Jasso/Reuters) 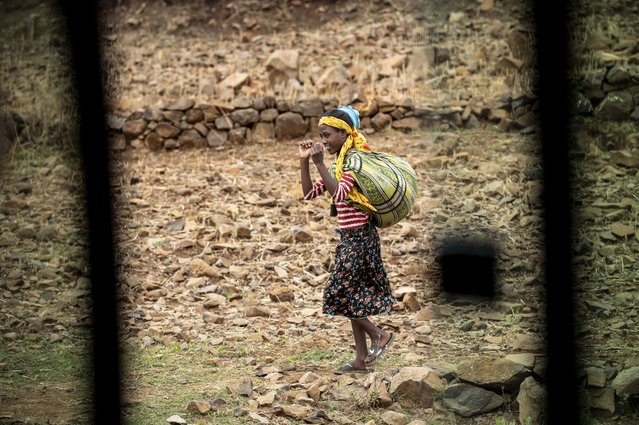 A girl walks by the side of the road, seen through a partially-open window of a vehicle, between Gondar and Danshe, a town in an area of western Tigray annexed by the Amhara region during the ongoing conflict, in Ethiopia Saturday, May 1, 2021. Ethiopia faces a growing crisis of ethnic nationalism that some fear could tear Africa's second most populous country apart, six months after the government launched a military operation in the Tigray region to capture its fugitive leaders. (Photo by Ben Curtis/AP Photo) 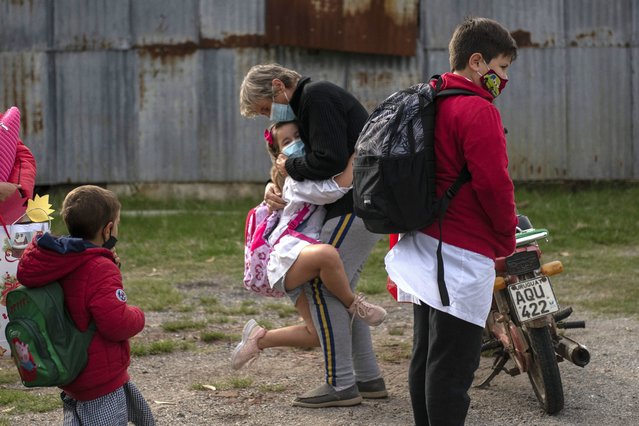 A student embraces a woman before entering school for the first time since it was closed due to the COVID-19 pandemic in Migues, Uruguay, Monday, May 3, 2021. Uruguay returned to face-to-face classes in some rural schools that have fewer than 20 students total and one teacher. (Photo by Matilde Campodonico/AP Photo) 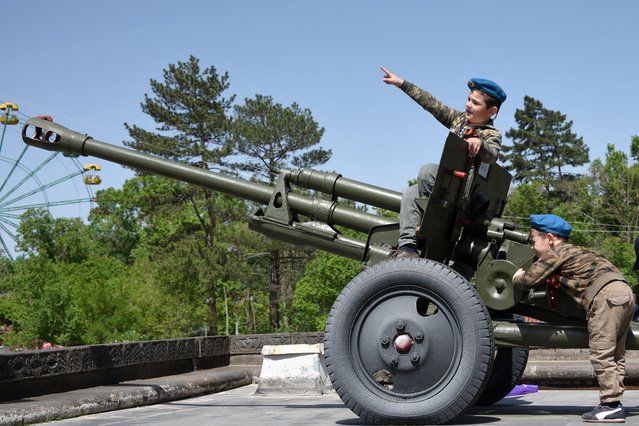 Boys play in the Victory Park during the Victory Day celebrations in Yerevan on May 9, 2021. Armenia celebrates the 76th anniversary of the Allied victory over Nazi Germany in World War II. (Photo by Karen Minasyan/AFP Photo) 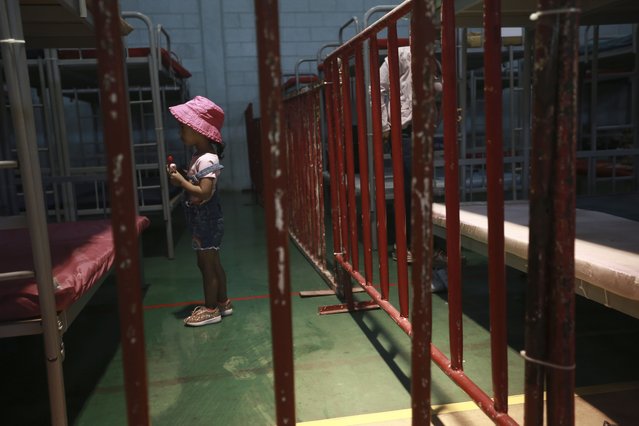 A girl talks to a family at the Kiki Romero Sports Complex migrant shelter after she was deported from the U.S., in Ciudad Juarez, Mexico, Wednesday, April 21, 2021. Mexico said it is planning to set up 17 shelters for underage migrants along the country's southern border, as well as some along the northern border with the United States, amid a wave of child migrants coming from Central America. (Photo by Christian Chavez/AP Photo) 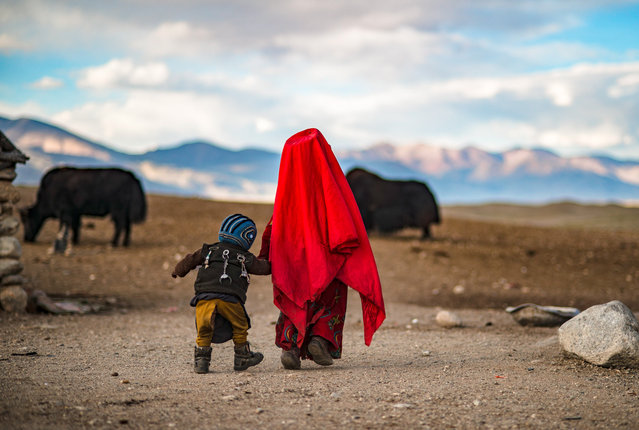 Nomadic Pamir Kyrgyz children herders in the isolated mountain valleys of northeastern Afghanistan. “Children are a rare gift”, as the saying goes among Afghan Kyrgyz. In the Pamir, the back of children are pinned with talismans for their health at times when good care becomes useless. During winter, the harsh climate is marked with lows reaching easily –40° C and summers are made of only two months over 0° C. (Photo by Tobias Marschall/Courtesy Photo) 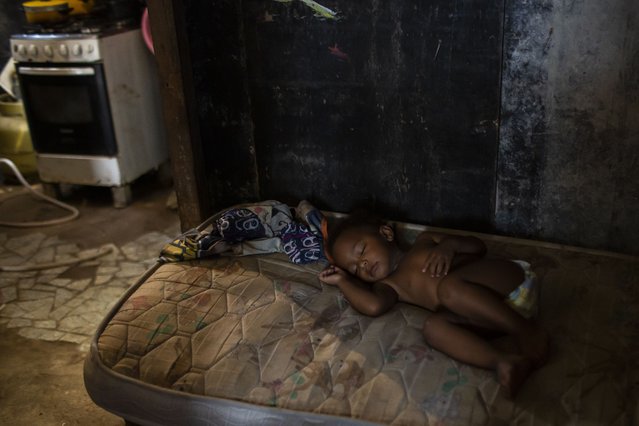 Ana Beatriz sleeps on a mattress while her mother Debora Estanislau, who before the new coronavirus pandemic hit made a living as a domestic worker cooks, in the house where she lives with her four children at the Cidade de Deus favela, in Rio de Janeiro, Brazil, Sunday, April 18, 2021. (Photo by Bruna Prado/AP Photo) 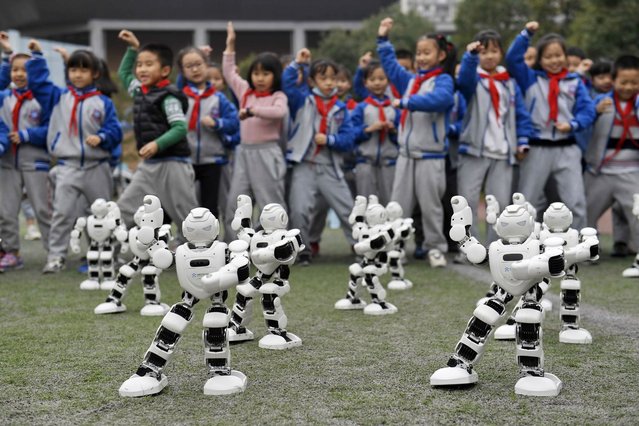 The students are watching the robots doing Tai Chi at the 6th science and technology innovation education festival on 22th November, 2020 in Chengdu, Sichuan, China. (Photo by TPG/Getty Images) 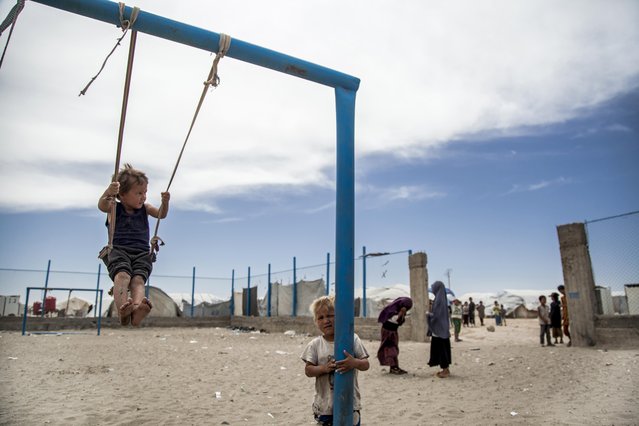 Children play at al-Hol camp that houses some 60,000 refugees, including families and supporters of the Islamic State group, many of them foreign nationals, in Hasakeh province, Syria, Saturday, May 1, 2021. Kurdish officials say security has improved at the sprawling camp in northeast Syria, but concerns are growing of a coronavirus outbreak in the facility. (Photo by Baderkhan Ahmad/AP Photo) 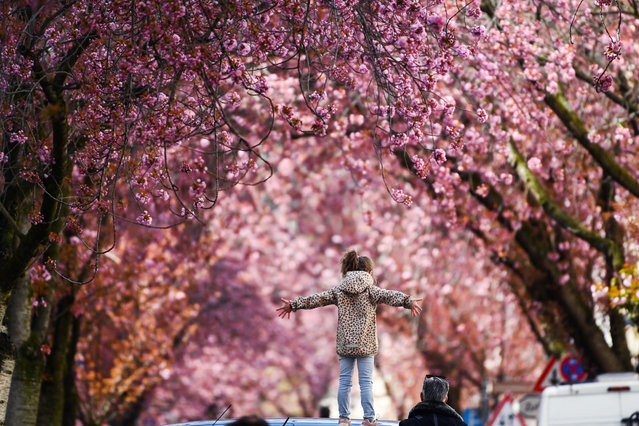 A girl poses under blooming cherry trees at the Heerstrasse street in Bonn, western Germany on April 9, 2021. The cherry blossom street in Bonn became famous after photographers started posting pictures of it on the web in the 1980s. (Photo by Ina Fassbender/AFP Photo)
Edit Del
29 May 2021 09:01:00, post received 0 comments
Publication archive:
←   →
Popular tags:
All tags
Last searches: