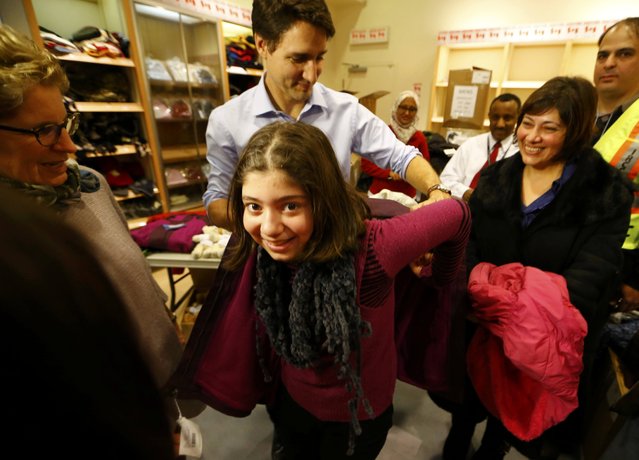 Canada's Prime Minister Justin Trudeau helps a young Syrian refugee try on a winter coat after she arrived with her family from Beirut at the Toronto Pearson International Airport in Mississauga, Ontario, Canada December 11, 2015. After months of promises and weeks of preparation, the first Canadian government planeload of Syrian refugees landed in Toronto on Thursday, aboard a military aircraft met by Prime Minister Justin Trudeau. (Photo by Mark Blinch/Reuters) 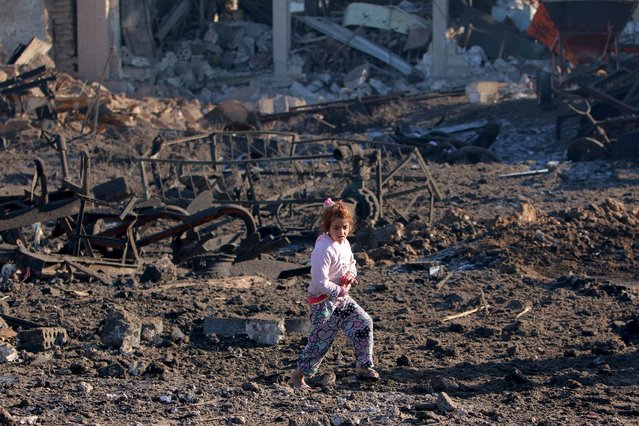 A girl walks over debris at a site hit by one of 3 three truck bombs, in the YPG-controlled town of Tel Tamer, Syria December 11, 2015. (Photo by Rodi Said/Reuters) 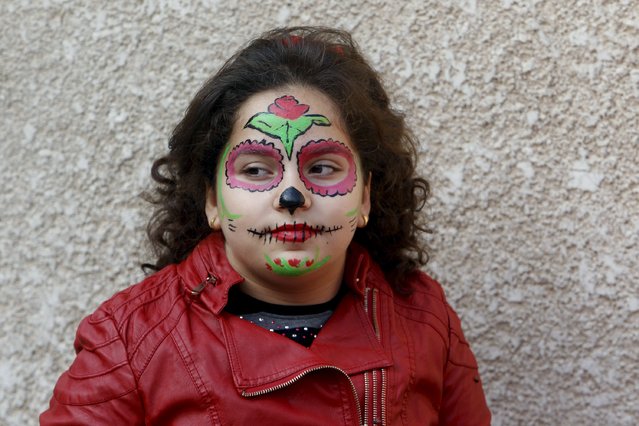 An internally displaced Christian girl, who has fled from Islamic State militants, stands against a wall with her face painted, at a church in Baghdad November 20, 2015. (Photo by Khalid al-Mousily/Reuters) 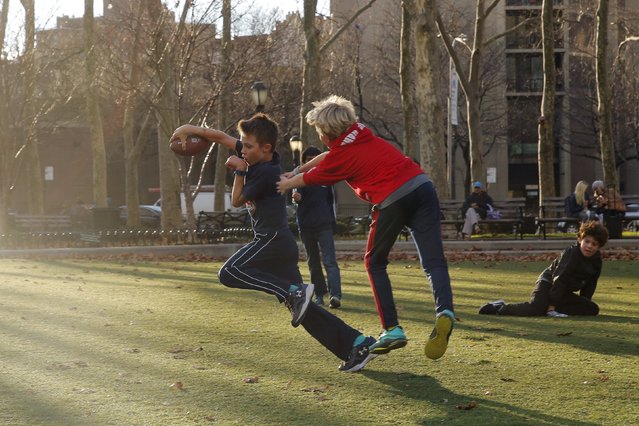 Young boys play in a park during an unusually warm winter day in the Brooklyn borough of New York December 15, 2015. (Photo by Lucas Jackson/Reuters) 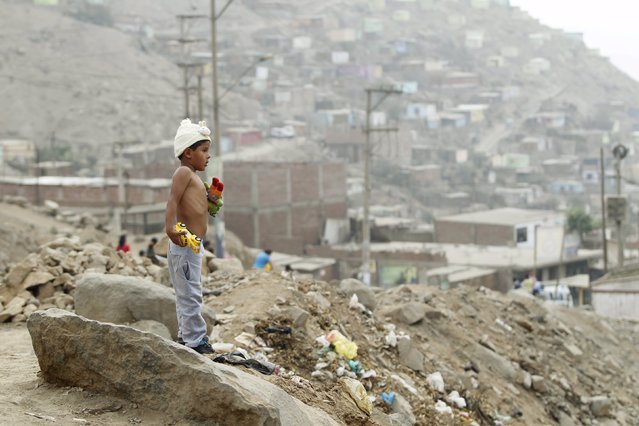 A boy stands with his toys during Christmas celebration in Huaycan on the outskirts of Lima, Peru December 15, 2015. (Photo by Janine Costa/Reuters) 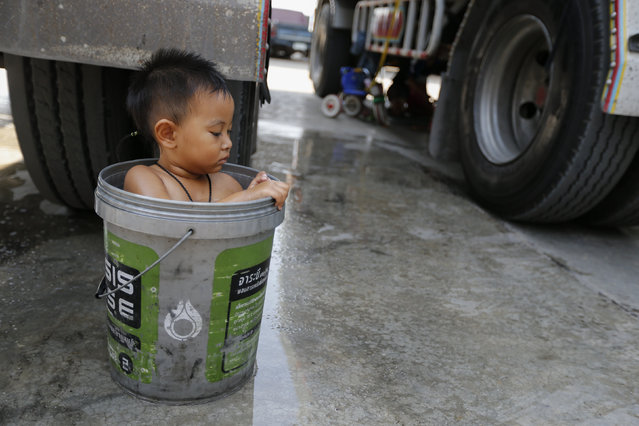 A boy bathes in a bucket next to his father's rice truck outside a rice mill in the central province of Chainat , Thailand December 16, 2015. (Photo by Jorge Silva/Reuters) 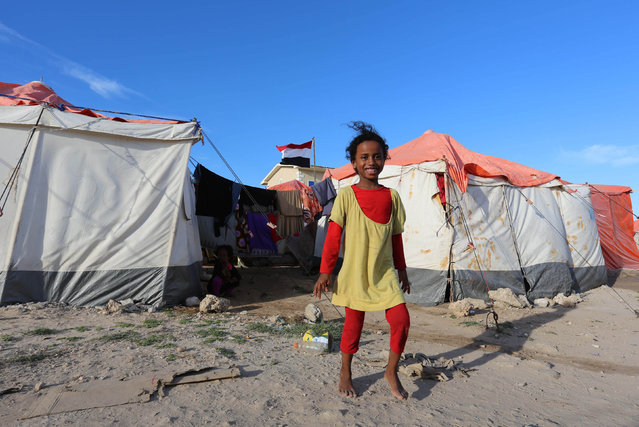 A Yemeni refugee girl walks from their shelter tent at a makeshift camp in Somalia's capital Mogadishu, December 16, 2015. (Photo by Feisal Omar/Reuters) 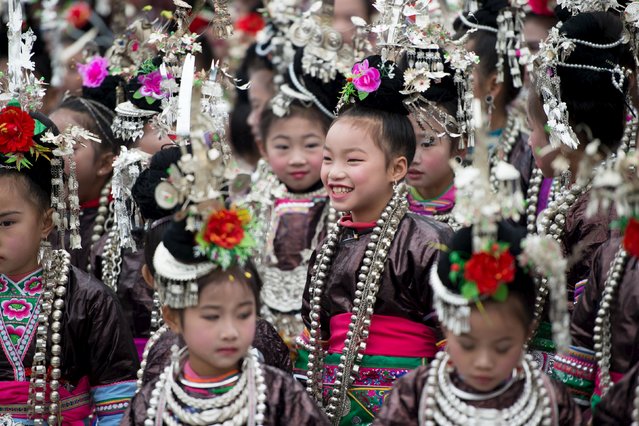 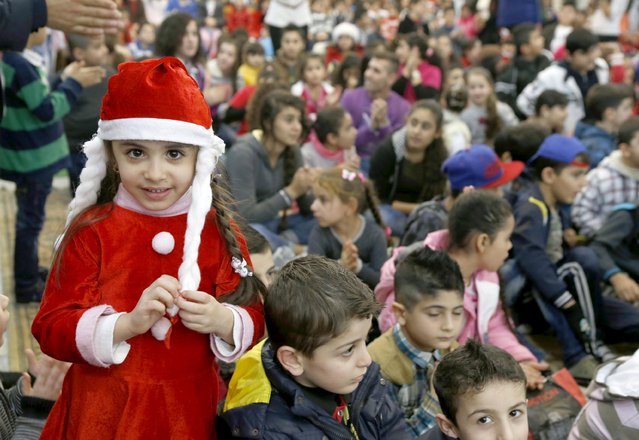 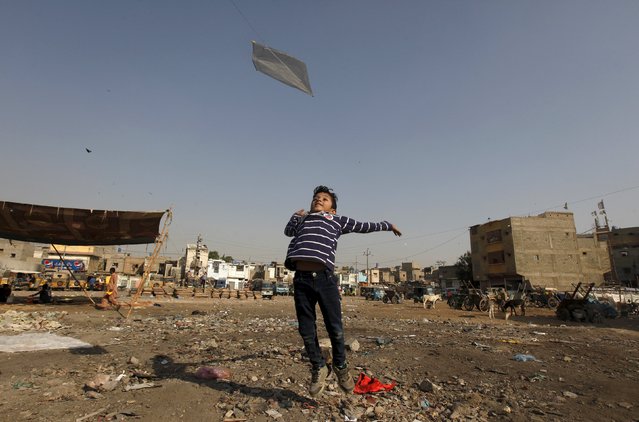 Eight-year-old Aayan helps his friend to fly a kite along a littered ground near a low income residential area in Karachi, Pakistan, December 20, 2015. (Photo by Akhtar Soomro/Reuters) 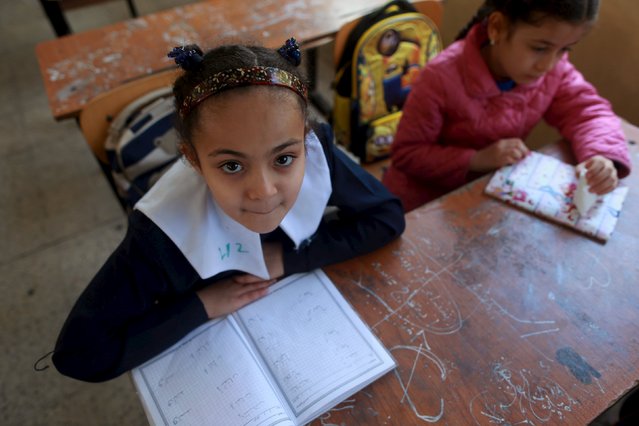 Schoolgirls attend a lesson at a school that reopened after a gap of more than a year and a half because of clashes in Benghazi, Libya December 20, 2015. (Photo by Esam Omran Al-Fetori/Reuters) 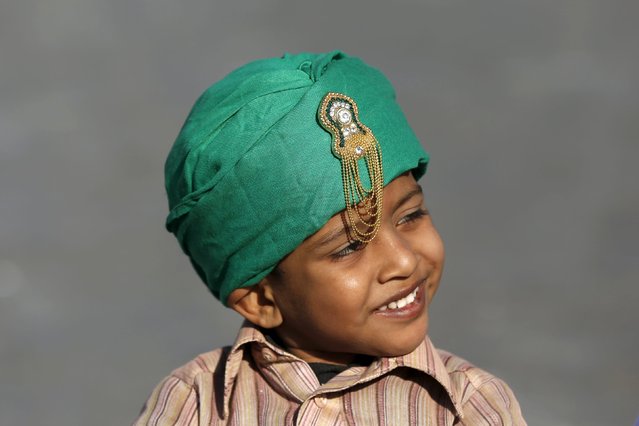 A boy sports a religious motif on his turban while taking part in a procession to mark Eid-e-Milad-ul-Nabi, or birthday celebrations of Prophet Mohammad, in Karachi, Pakistan, December 24, 2015. (Photo by Akhtar Soomro/Reuters) 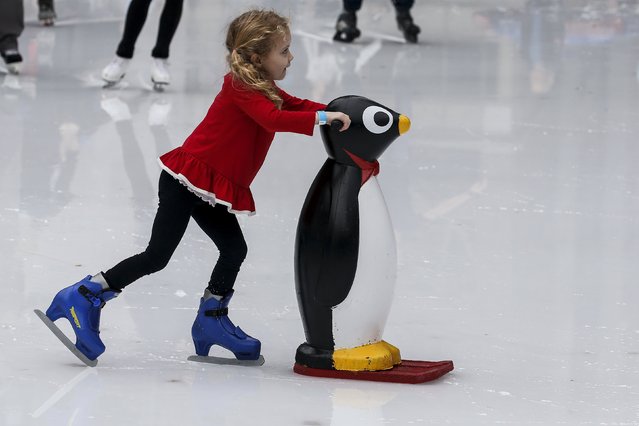 A child uses a penguin skating aid at the skating rink in Bryant Park during unseasonably warm weather on Christmas Eve in the Manhattan borough of New York December 24, 2015. (Photo by Carlo Allegri/Reuters) 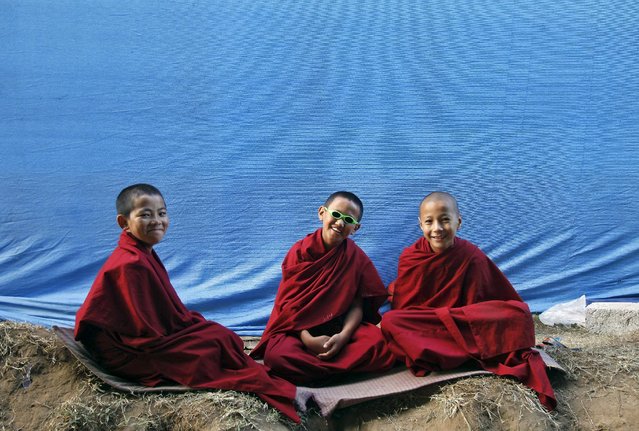 Novice Buddhist monks react to the camera during the Jangchup Lamrim teachings conducted by the Tibetan spiritual leader the Dalai Lama (not pictured) at the Tashi Lhunpo Monastery in Bylakuppe in Karnataka, India, December 25, 2015. (Photo by Abhishek N. Chinnappa/Reuters) 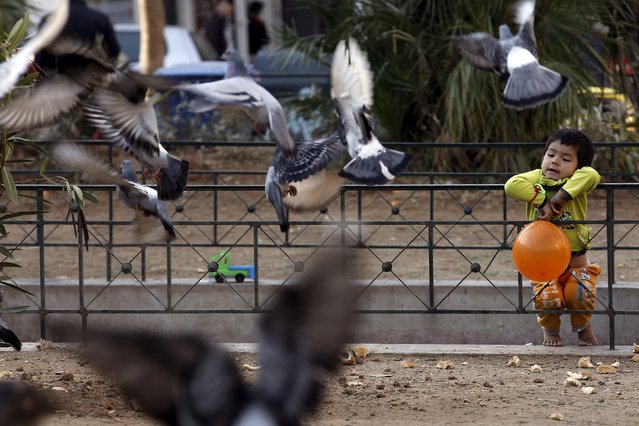 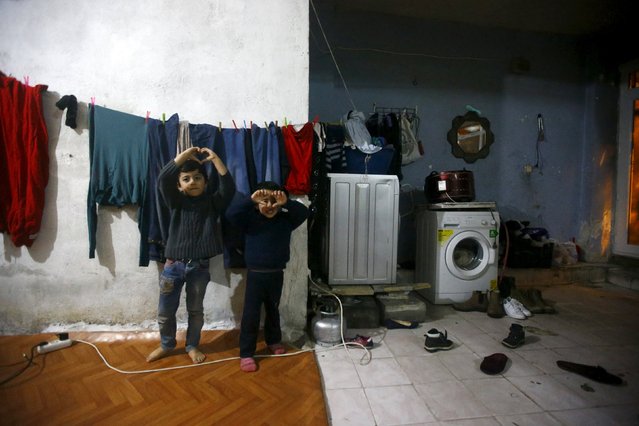 Syrian refugee boys pose as his mother takes part in an interview with Reuters in Istanbul, Turkey, December 16, 2015. (Photo by Osman Orsal/Reuters) 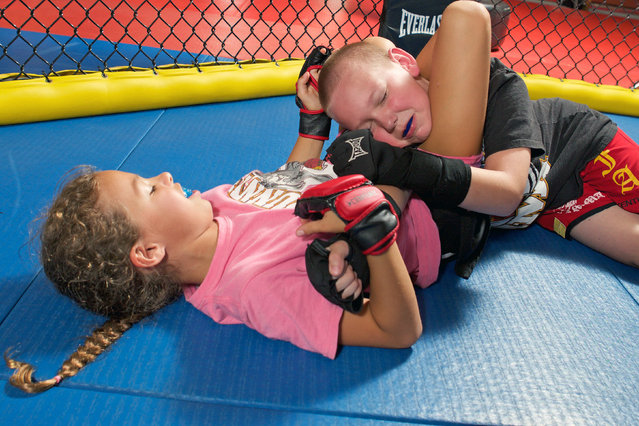 Valery Bystritskii, 10, gets a fellow student into a lock at Bunny's Gym in July 2015 in Winchester, Tennessee. (Photo by Mike Saliba/Barcroft USA) 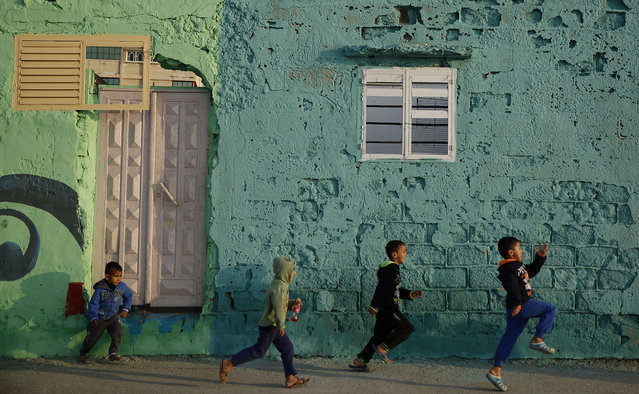 In this Saturday December 19, 2015 file photo, Palestinian boys run by a painted house in the Shati Refugee Camp in Gaza City. Shati has always been a symbol of poverty, a grey concrete jungle with 87,000 people packed into one fifth of a square mile (half a square kilometer). But now, overlooking the sewage-contaminated Mediterranean beachfront, the camp's houses are covered in vibrant colors. (Photo by Hatem Moussa/AP Photo) 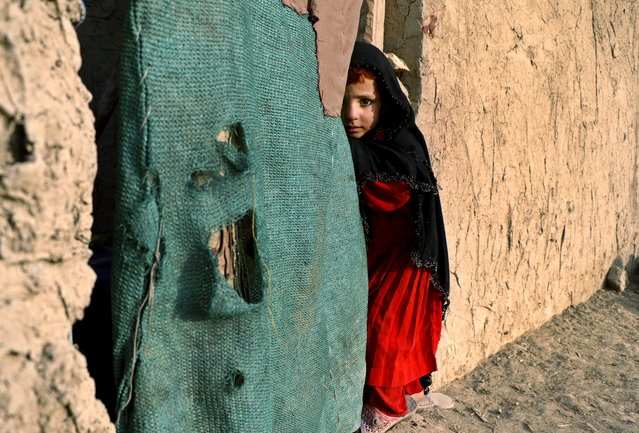 A young Afghan Internally Displaced Person (IDP) stands outside a temporary shelter in an IDP camp in Kabul, Afghanistan, December 21, 2015. According to UN Refugee Agency (UNHCR) figures, the number of internally displaced Afghans was 683,000 by mid-2014, a number expected to climb to 900,000 by the end of 2015, as unrest continues in the country after several offensives by the Taliban in various provinces leading to large Afghan National Army (ANA) losses. (Photo by Hedaytullah Amid/EPA) 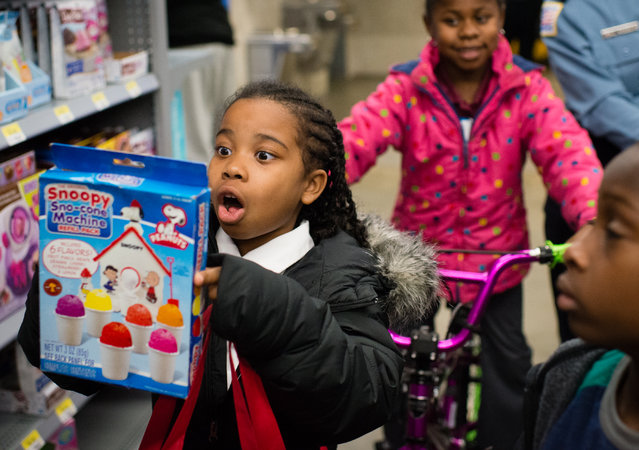 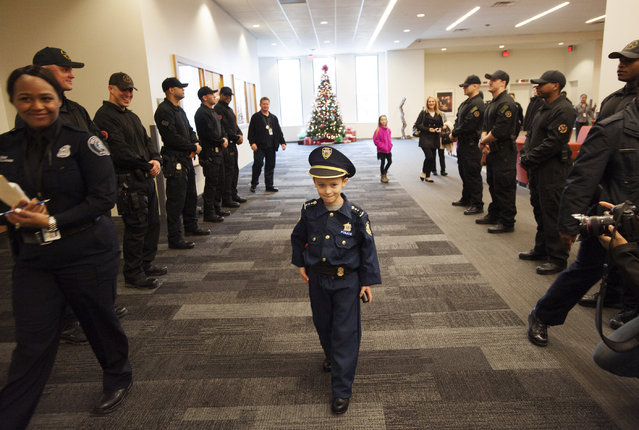 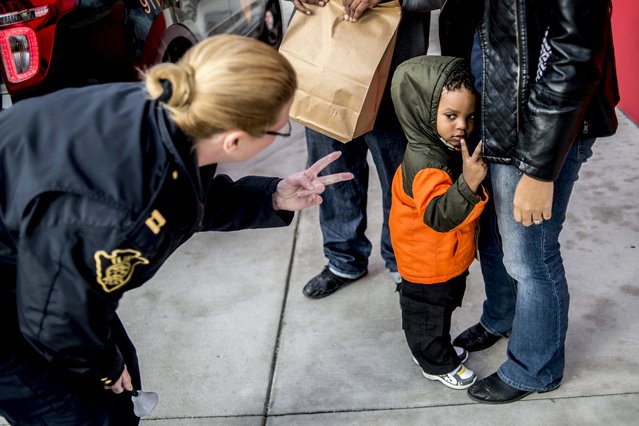 Flint Police Capt. Leigh Golden, left, holds up two fingers as to mimic Israel Altheimer, 2, as he tells her his age on Thursday, December 10, 2015 at the Flint Farmers' Market in Flint, Mich This is the second year The Flint Police Department teamed up with the Salvation Army of Flint and Genesee County to help raise donations for the Red Kettle Drive. (Photo by Jake May/The Flint Journal-MLive.com via AP Photo) 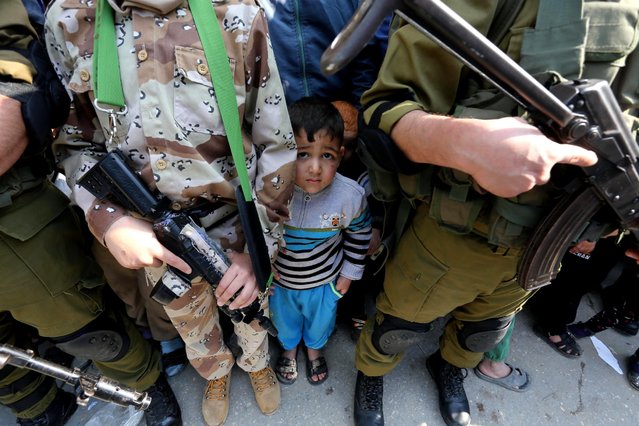 Hundreds of people in Jabalia Refugee Camp in the north Gaza Strip march to Sirh Square to mark the 28th anniversary of the founding of Hamas movement in Gaza on December 11, 2015. Hamas's armed wing, the Izz ad-Din al-Qassam brigades, held a ceremony during the march. (Photo by Mohammed Asad/Anadolu Agency/Getty Images) 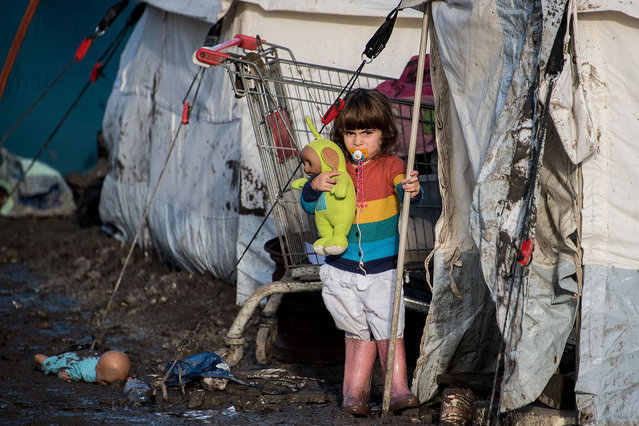 The child of Kurdish migrants stands outside a tent at the Grande Synthe migrant camp near Dunkerque in northern France on December 23, 2015. More than 2,000 migrants, mostly Iraqis and Kurds, live in the camp. The UN refugee agency and the International Organization for Migration (IOM) said this week more than one million migrants and refugees reached Europe this year, most of them by sea, more than four times the figure for 2014. (Photo by Denis CharletAFP Photo)
Edit Del
30 Dec 2015 08:06:00, post received 0 comments
Publication archive:
←   →
Popular tags:
All tags
Last searches: