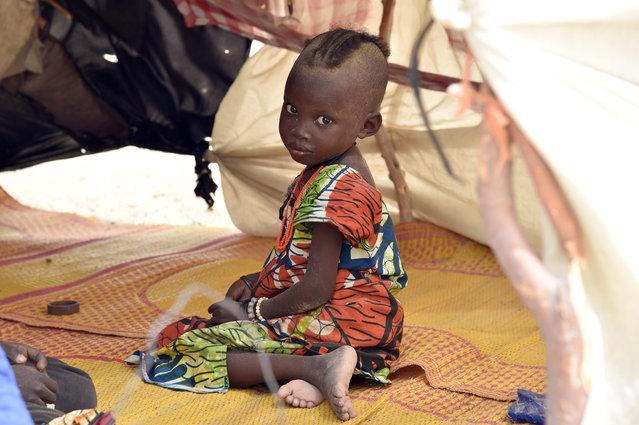 A child looks on under a makeshift tent in a camp in the village of Kidjendi near Diffa on June 19, 2016 as displaced families fled from Boko Haram attacks in Bosso. Earlier this month 24 soldiers from Niger and two Nigerian troops were killed in a Boko Haram attack in the Bosso area of Niger, near Lake Chad, prompting Chad to send in reinforcements. (Photo by Issouf Sanogo/AFP Photo) 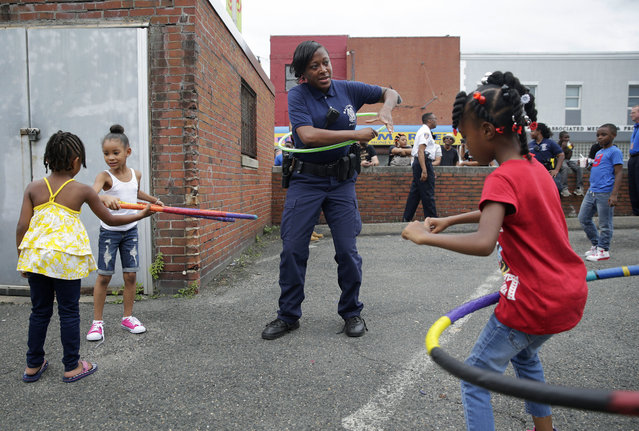 Baltimore Police Officer Chantell English, center, and young girls play with hula hoops in the Penn North neighborhood of Baltimore, Thursday, June 23, 2016, near the site of unrest following the funeral of Freddie Gray. Officer Caesar Goodson, one of six Baltimore city police officers charged in connection to the death of Gray, was acquitted of all charges in his trial Thursday. (Photo by Patrick Semansky/AP Photo) 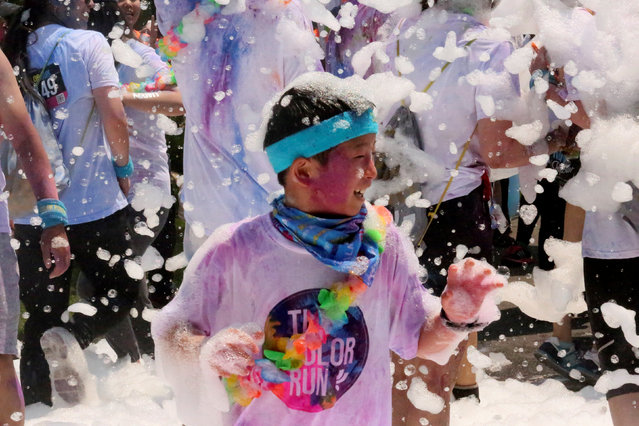 A boy stands in foam during the Bejing Color Run in Beijing, June 18, 2016. (Photo by Reuters/Stringer) 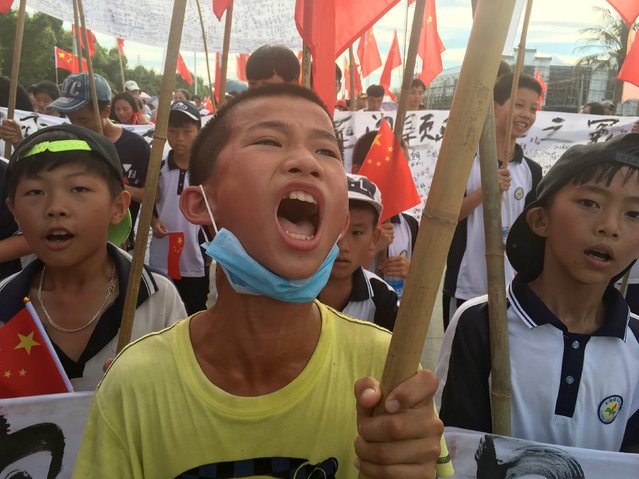 Villagers including schoolchildren take part in a protest march, demanding the release of their village chief Lin Zuluan, in Wukan, in China's Guangdong province June 21, 2016. (Photo by James Pomfret/Reuters) 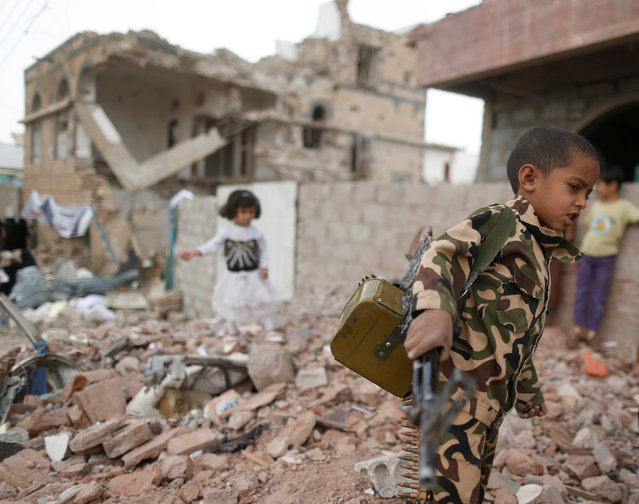 A boy carries a toy machine gun next to destroyed houses during a vigil marking one year since a Saudi-led air strike on a residential area in Sanaa, Yemen June 21, 2016. (Photo by Khaled Abdullah/Reuters) 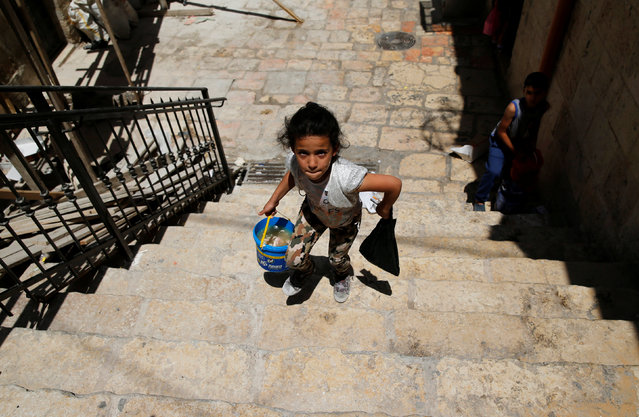 A Palestinian girl walks after she received a pack of food in the Old City of Jerusalem during the Muslim holy month of Ramadan June 22, 2016. (Photo by Ammar Awad/Reuters) 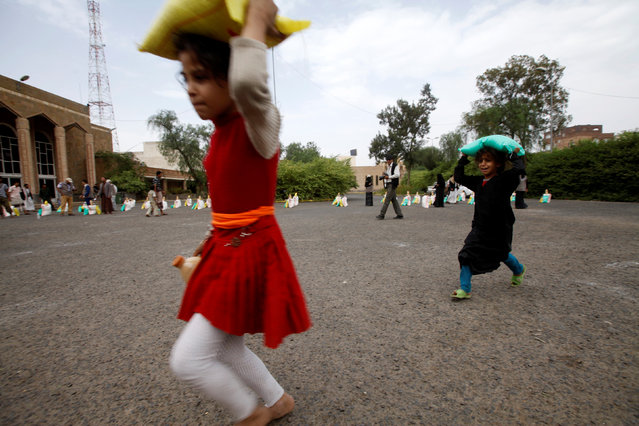 Girls carry their food supplies they received from a local charity in Sanaa, Yemen, June 23, 2016. (Photo by Mohamed al-Sayaghi/Reuters) 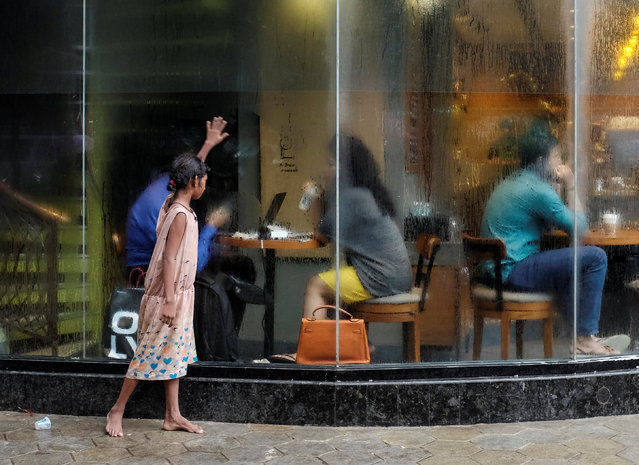 A homeless girl asks for alms outside a coffee shop in Mumbai, India, June 24, 2016. (Photo by Danish Siddiqui/Reuters) 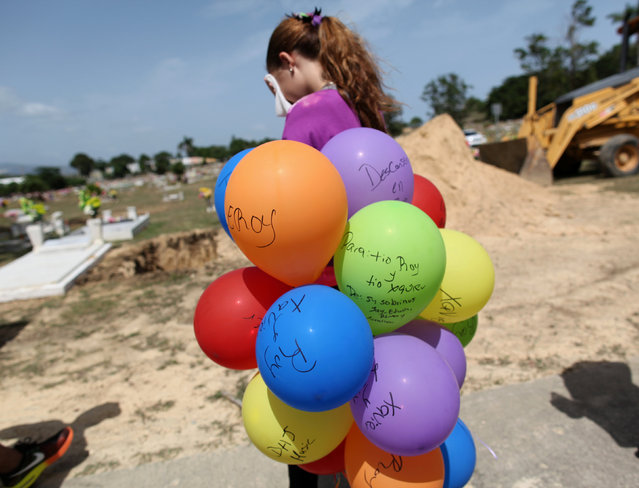 A relative of Xavier Emmanuel Serrano Rosado, one of the victims of the shooting at the Pulse night club in Orlando, reacts while carrying balloons inscribed to him during his funeral in his hometown of Ponce, Puerto Rico, June 24, 2016. (Photo by Alvin Baez/Reuters) 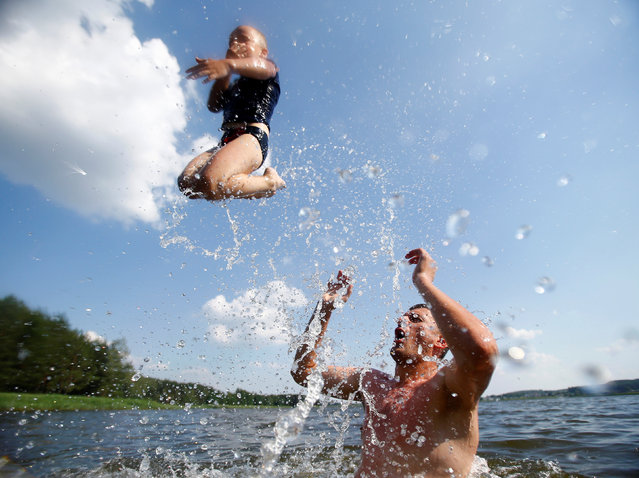 A man with a boy cool themselves down in a lake as the temperature reaches up to 35 degrees Celsius (95 degrees Fahrenheit) near the village of Novosyolki, Belarus, June 25, 2016. (Photo by Vasily Fedosenko/Reuters) 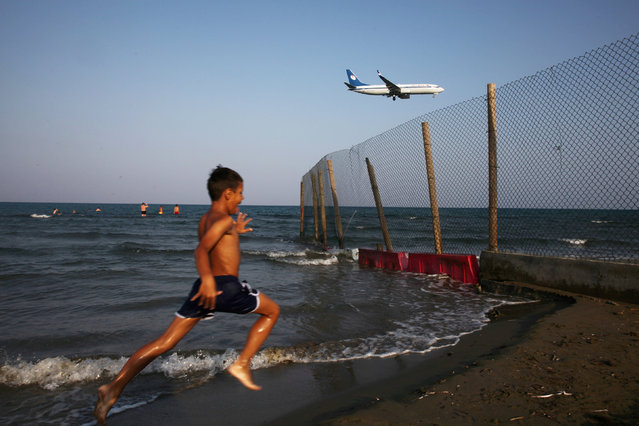 A boy runs on a beach while an airplane prepares to land at Larnaca International Airport, Cyprus June 28, 2016. (Photo by Yiannis Kourtoglou/Reuters) 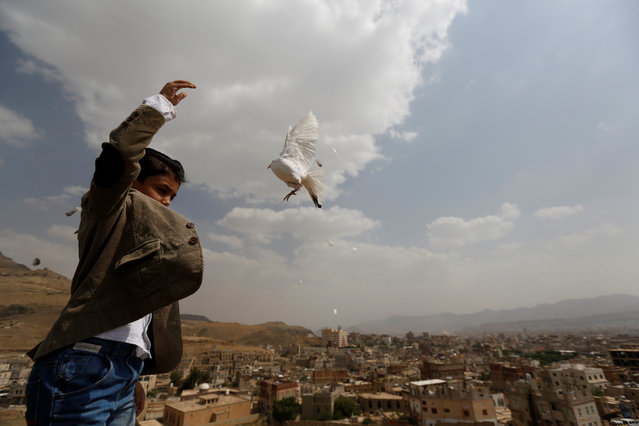 A boy releases a dove as part of a campaign to push Yemeni negotiators to in Kuwait to reach a peace agreement, in Sanaa, Yemen June 29, 2016. (Photo by Khaled Abdullah/Reuters) 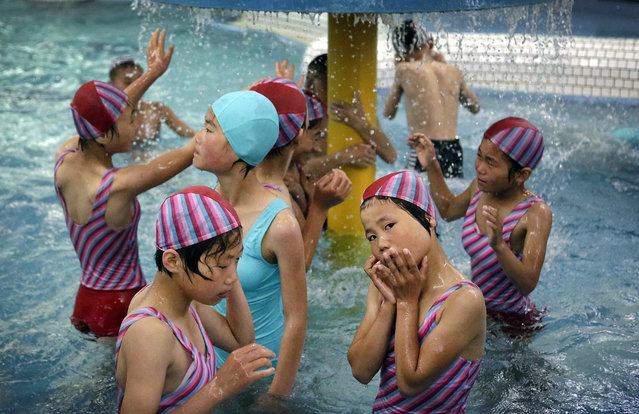 In this Thursday, June 23, 2016, photo, North Korean school children spend their time in the aquatic center at the Songdowon International Children's Camp located in Wonsan, North Korea. The camp, which has been operating for about 30 years, was intended mainly to deepen relations with friendly countries in the Communist or non-aligned world. (Photo by Wong Maye-E/AP Photo) 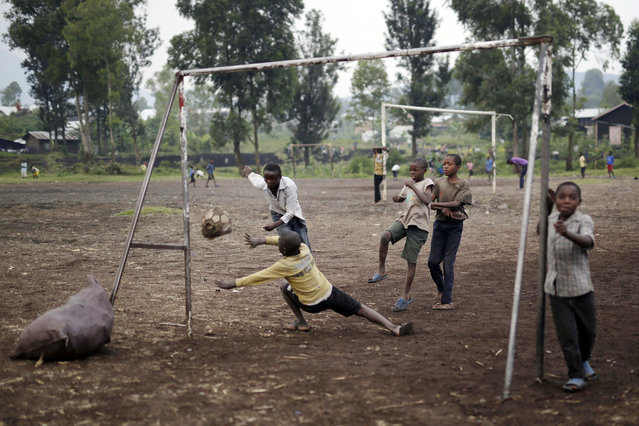 Congolese children play football on a dirt field in Goma, Democratic Republic of Congo, Saturday June 18, 2016. One goal was scored with the old deflated ball the children use to play with. (Photo by Jerome Delay/AP Photo) 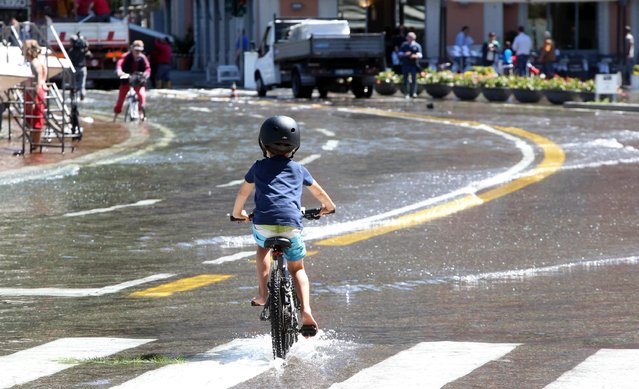 A child rides his bike through flood waters as Lake Como overflows at Cavour square in Como, Italy, 17 June 2016. (Photo by Matteo Bazzi/EPA) 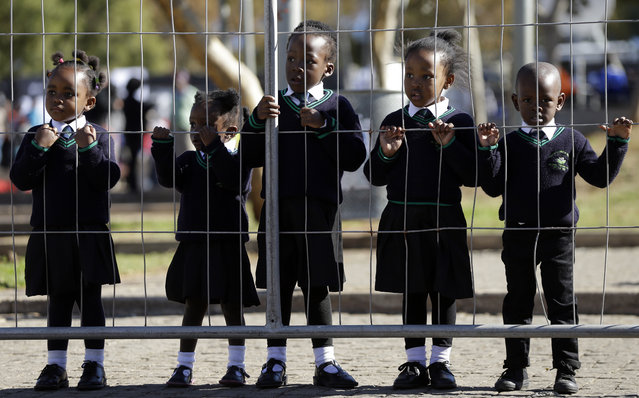 Children wearing school uniforms watch the laying of wreaths, at the Hector Pieterson Memorial in Soweto, South Africa, Thursday, June 16, 2016, for commemoration of the 40th anniversary of uprisings. South Africans are commemorating the 40th anniversary of a pivotal moment in the anti-apartheid struggle, a 1976 black student uprising in the Soweto area of Johannesburg that led to a deadly crackdown but launched a new phase of opposition to white minority rule. (Photo by Themba Hadebe/AP Photo) 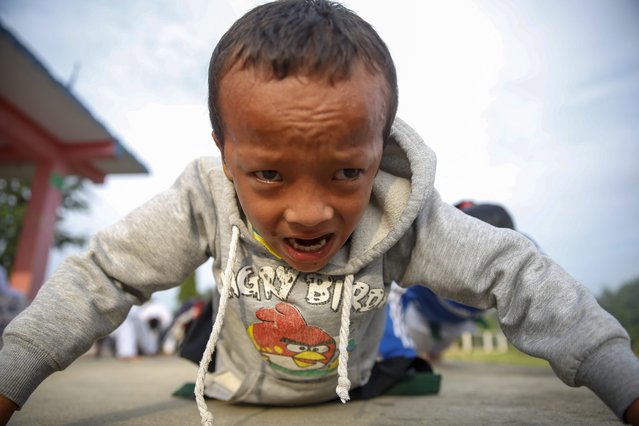 A Nepalese child participates during a Taekwondo and Karate self-defense training class, early morning in Sindhuli District, Nepal, 16 June 2016. The Sindhuli Takenwondo Dojang is owned by Garuv Ale (unseen) who used to be a Taekwondo national player for Nepal, Now Gaurav organizes classes for more than 30 children aged between 6 and 18-year-old at a community ground in Sindhuli district for free. Most of the students say that they come to the Taekwondo class for physical fitness and self-defense. (Photo by Narendra Shrestha/EPA) 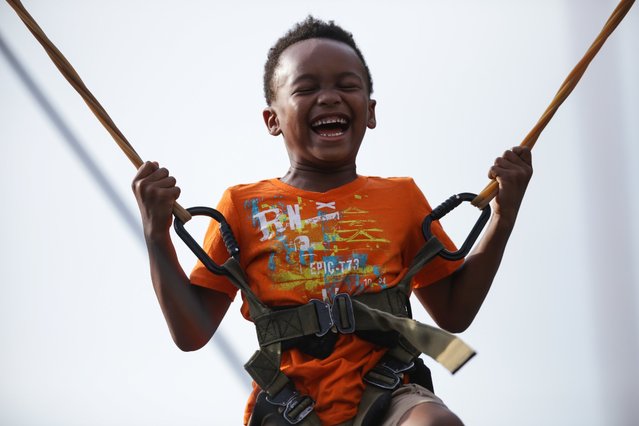 Dominic Bennett,6, bounces on the bungee trampoline during AthFest in Athens, Ga.,Friday, June 24, 2016. The AthFest music festival is a production of AthFest Educates, a nonprofit music and arts education organization in Athens. (Photo by John Roark/Athens Banner-Herald via AP Photo) A young girl in her princess outfit reacts to the sound of a dog in the “Alice in Wonderland Maze” atraction on opening day at the Shanghai Disney Resort in Shanghai on June 16, 2016. Entertainment giant Disney opened a massive theme park in Shanghai on June 16, hoping to win over communist-ruled China's growing middle class with the ultimate US cultural export. (Photo by Johannes Eisele/AFP Photo) 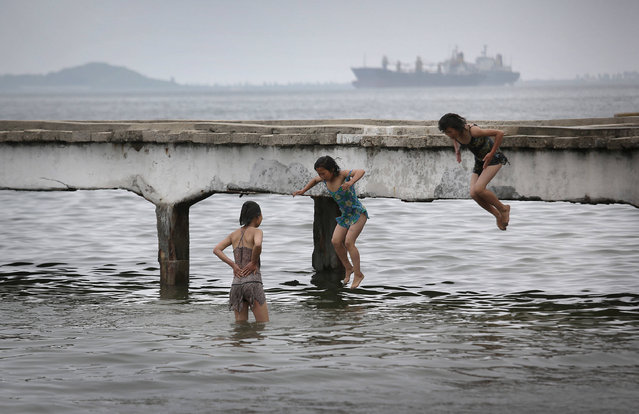 Girls jump off a pier along the beach, Tuesday, June 21, 2016, in Wongson, North Korea. Wonsan, about 125 miles from Pyongyang, is a port city located in Kangwon Province, North Korea along the eastern side of the Korean Peninsula and was one of the cities chosen to be developed into a summer destination for locals as well as tourists. (Photo by Wong Maye-E/AP Photo) 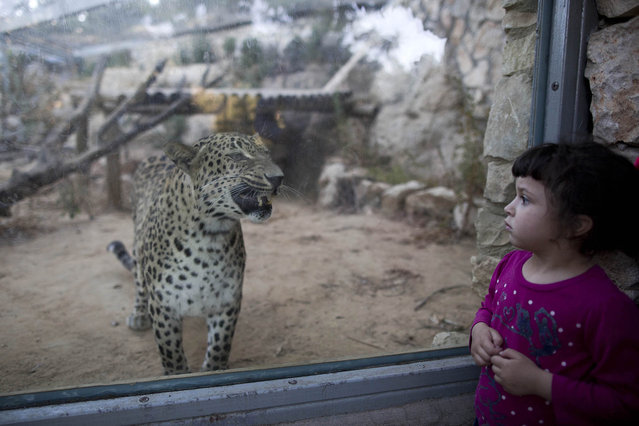 A young girl look at a Persian leopard in its enclosure at the Biblical Zoo in Jerusalem, Israel, 21 June 2016. Jerusalem Biblical Zoo is renowned for housing wildlife featured in the Bible. (Photo by Abir Sultan/EPA) 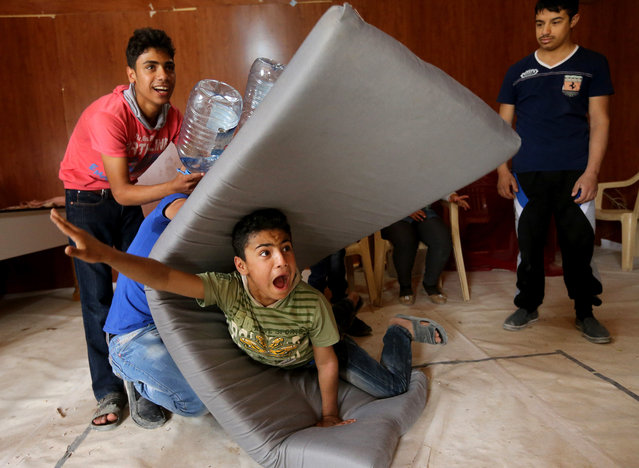 In this picture taken on Tuesday May 3, 2016, Syrian refugee actors perform during a rehearsal performance, at an informal refugee camp, in the eastern town of Bar Elias, in Bekaa valley, Lebanon. The Caravan, a street performance project that plans to tour Lebanon over the next six weeks, is a collection of stories told, recorded and acted by Syrian refugees. And the range of reactions at the Saadnayel market is precisely what the directors of the project anticipated, even desired. Five years since the war in Syria, the influx has not stopped and Lebanese and Syrians alike are grappling to deal with the new reality in the absence of a political resolution. (Photo by Hussein Malla/AP Photo) 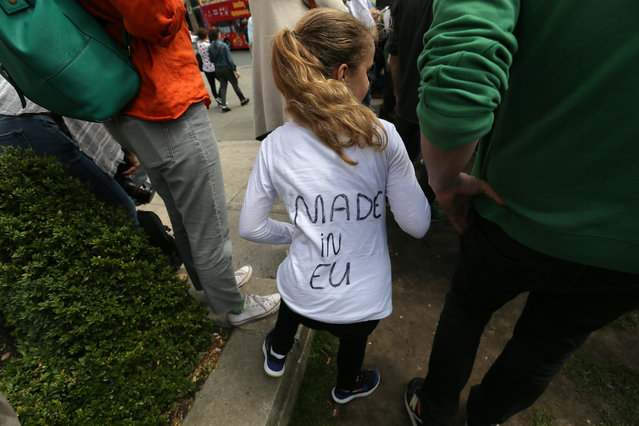 Displaced Iraqis who fled the government's operation against the Islamic State (IS) group in the city of Fallujah are seen on June 20, 2016 in a camp in Khaldiyeh. They fled starvation and jihadist tyranny in Fallujah for the safety of displacement camps but thousands of Iraqi families still have nothing to eat and nowhere to sleep. More than 60,000 people have been forced from their homes in the area over the past month and a sudden influx of civilians pouring out of the city centre last week has left the aid community unable to cope. (Photo by Haidar Mohammed Ali/AFP Photo) 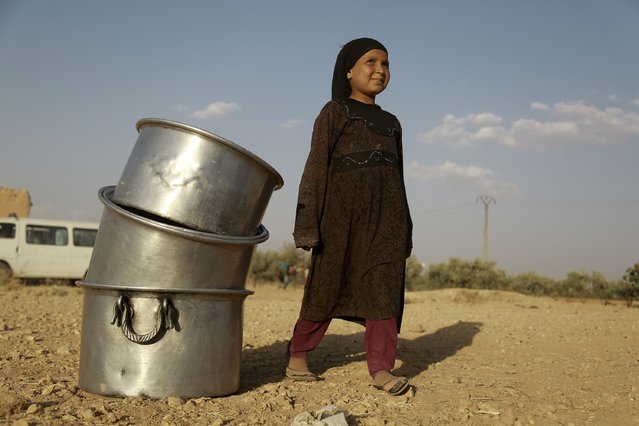 An Syrian girl stands next to cooking pots as US-backed Kurdish and Arab fighters advance into the Islamic State (IS) jihadist's group bastion of Manbij, in northern Syria, on June 23, 2016. Backed by air strikes by the US-led coalition bombing IS in Syria and Iraq, fighters with the Syrian Democratic Forces (SDF) alliance entered Manbij from the south, a monitoring group said. (Photo by Delil Souleiman/AFP Photo) 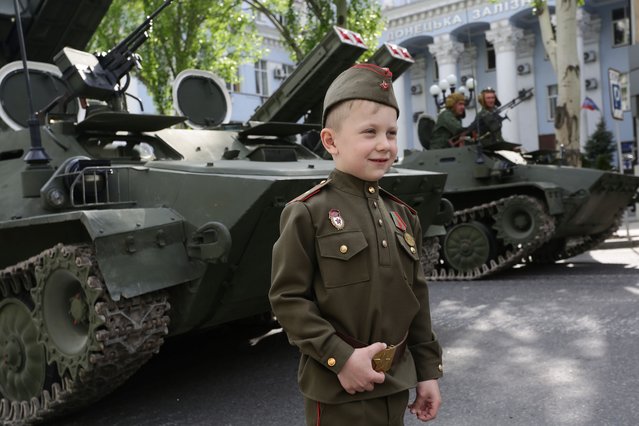 This photo taken on May 5, 2016 shows a boy wearing a Soviet-era uniform standing in front of an APC during rehearsal of Victory Day parade in Donetsk. Youth movements are only one example among many of this infatuation with the Soviet past. A least a dozen of them are now listed in the self-proclaimed People's Republic of Donetsk. During the May 9 parade celebrating the victory over Nazi Germany in 1945, many parents had covered their children's heads in red caps, typical of Soviet pioneers. (Photo by Aleksey Filippov/AFP Photo)
Edit Del
30 Jun 2016 11:46:00, post received 0 comments
Publication archive:
←   →
Popular tags:
All tags
Last searches: