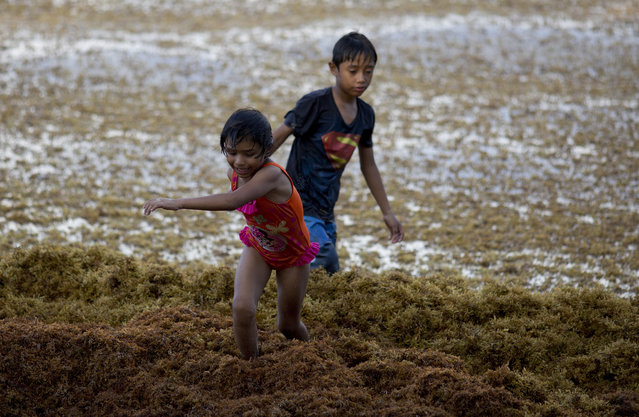 In this Sunday, August 5, 2018 photo, children play on the beach full of sargassum in Bahia La Media Luna, near Akumal in Quintana Roo state, Mexico. A Mexican environmental agency is constructing barriers at sea just beyond its famed Riviera Maya beaches to decrease the massive amounts of sargassum washing up onshore. (Photo by Eduardo Verdugo/AP Photo) 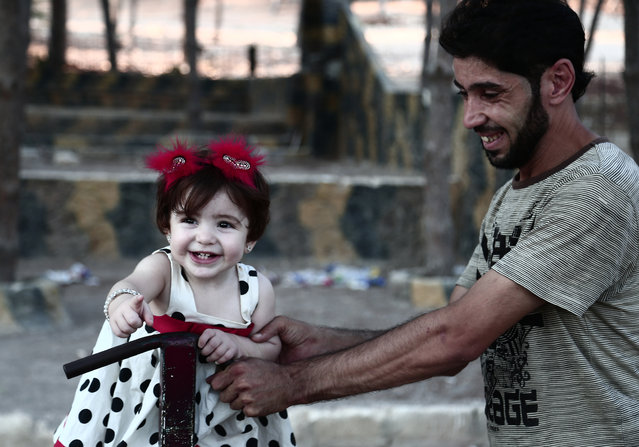 A man plays with a child dressed in her holiday clothes on the second day of Eid el-Adha at a park in the Syrian city of Afrin on August 22, 2018. Displaced from their homes in Syria's Eastern Ghouta, families sought refuge in abandoned houses in the traditionally Kurdish town of Afrin earlier this year. (Photo by Nazeer Al-Khatib/AFP Photo) 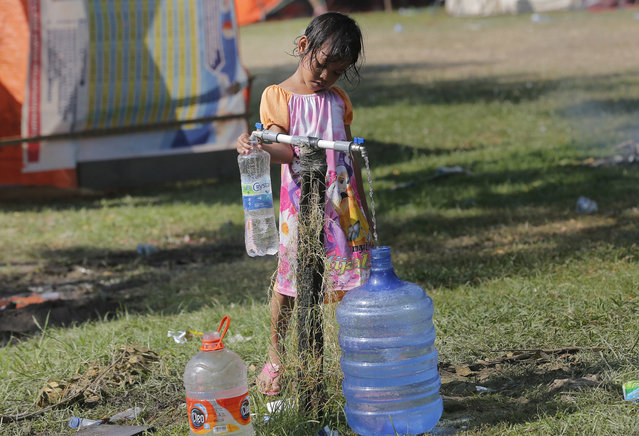 A girl fills water jugs at a temporary shelter in Palu, Central Sulawesi Indonesia, Thursday, Octuber 4, 2018. Life is on hold for thousands living in tents and shelters in the Indonesian city hit by a powerful earthquake and tsunami, unsure when they'll be able to rebuild and spending hours each day often futilely trying to secure necessities such as fuel for generators. (Photo by Tatan Syuflana/AP Photo) 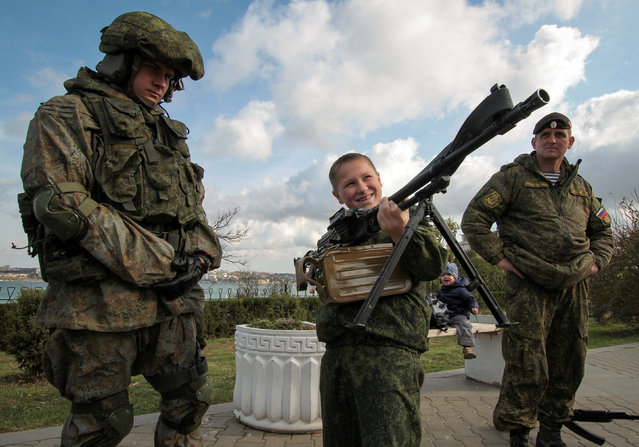 A boy holds a machine gun at a military hardware exhibition during a swear-in ceremony for new recruits of the Russian military-patriotic club “Yunarmia” (Young army) in the Black Sea port of Sevastopol, Crimea, October 27, 2018. (Photo by Pavel Rebrov/Reuters) 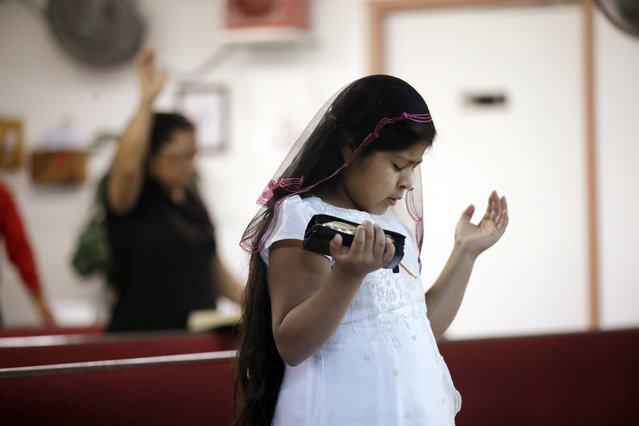 In this Wednesday, September 19, 2018 photo, a girl prays during a church service in Huron, Calif. California may be famous for its wealth, but there is a distinctly different part of the state where poverty prevails: places like this one halfway between Los Angeles and San Francisco. (Photo by Marcio Jose Sanchez/AP Photo) 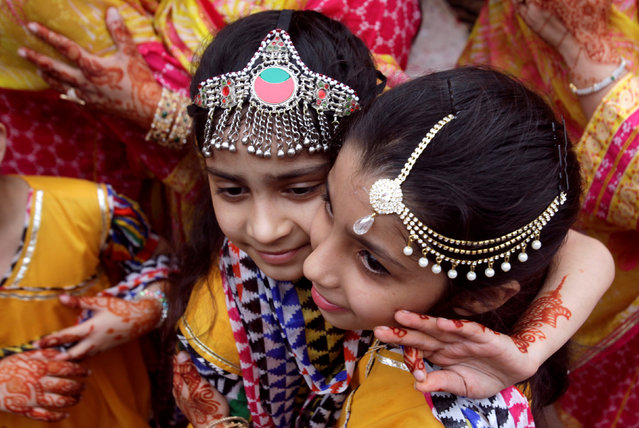 Children with traditional jewelry hug each other during Eid al-Adha celebration in Lahore, Pakistan on August 22, 2018. (Photo by Mohsin Raza/Reuters) 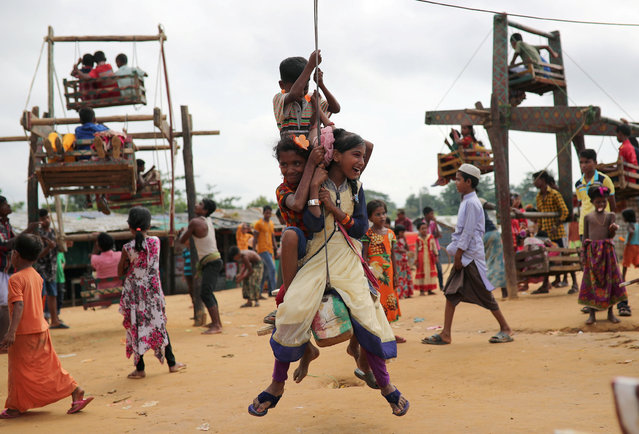 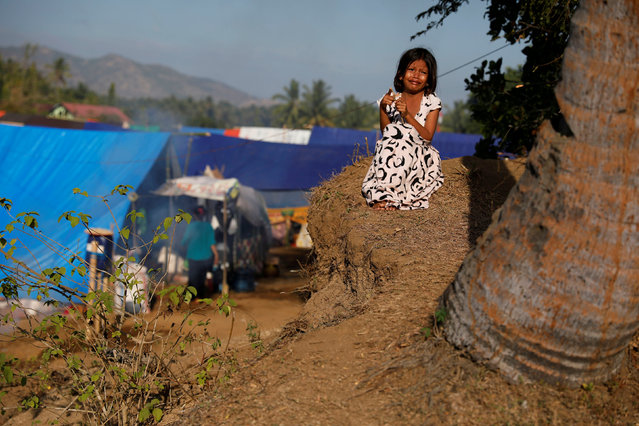 A girl cries as she waits for breakfast at a refugee camp after an earthquake hit on Sunday at Sigar Penjalin village in North Lombok, Indonesia, August 10, 2018. (Photo by Reuters/Beawiharta) 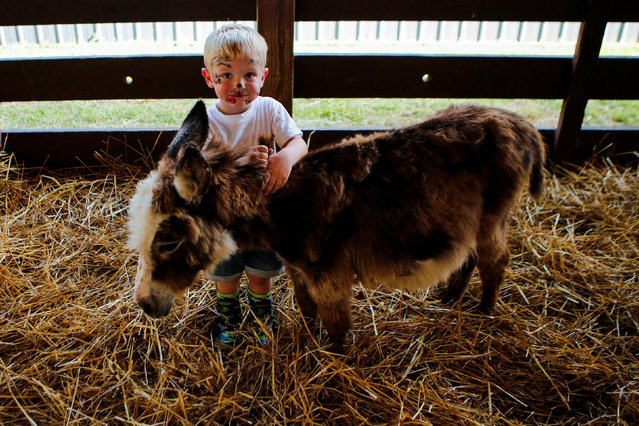 A boy stands next to a donkey as people attend the New Jersey State Fair in Augusta, New Jersey, August 12, 2018. (Photo by Eduardo Munoz/Reuters) 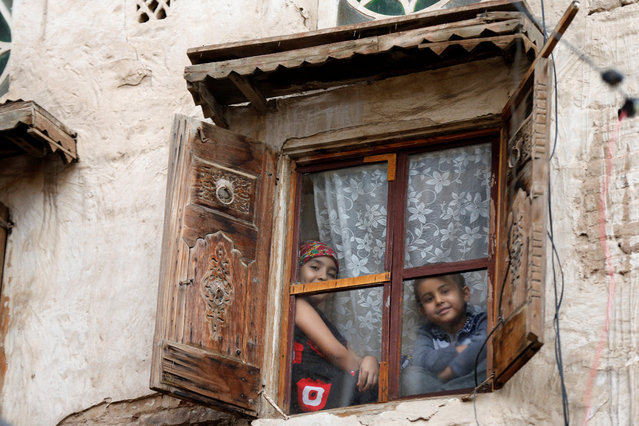 Children look from behind a window of a house in the old quarter of Sanaa, Yemen on August 14, 2018. (Photo by Khaled Abdullah/Reuters) An internally displaced girl plays in the Sudd Swamp near the town of Nyal, South Sudan on August 19, 2018. (Photo by Andreea Campeanu/Reuters) 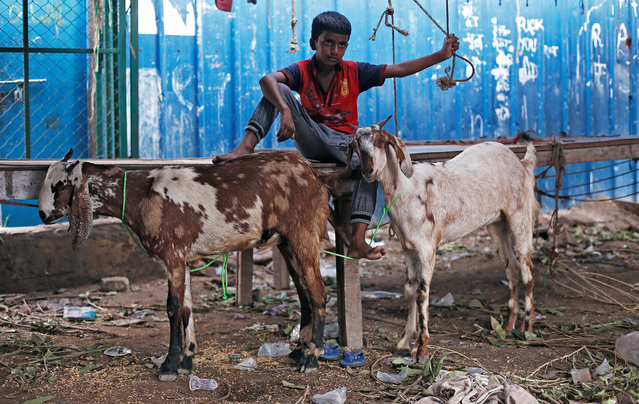 A boy sits with his goats as he waits for the customers at a livestock market ahead of the Eid al-Adha festival in the old quarters of Delhi, August 21, 2018. (Photo by Adnan Abidi/Reuters) 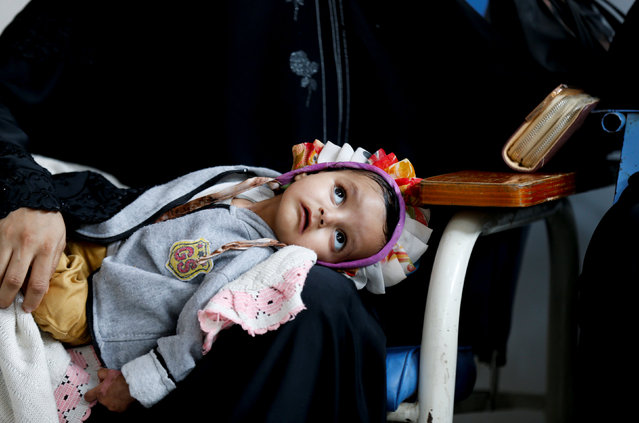 A girl with cancer lies on the lap of her mother at The National Oncology Centre in Sanaa, Yemen, August 6, 2018. (Photo by Khaled Abdullah/Reuters) 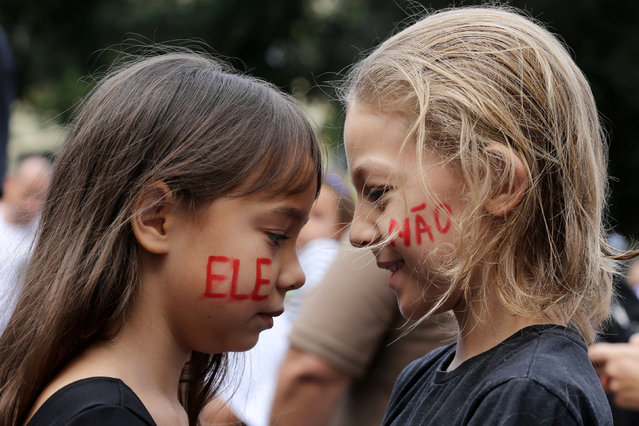 Children are seen with “Not Him” painted on her faces during demonstrations against presidential candidate Jair Bolsonaro, in Rio de Janeiro, Brazil September 29, 2018. (Photo by Ana Carolina Fernandes/Reuters) 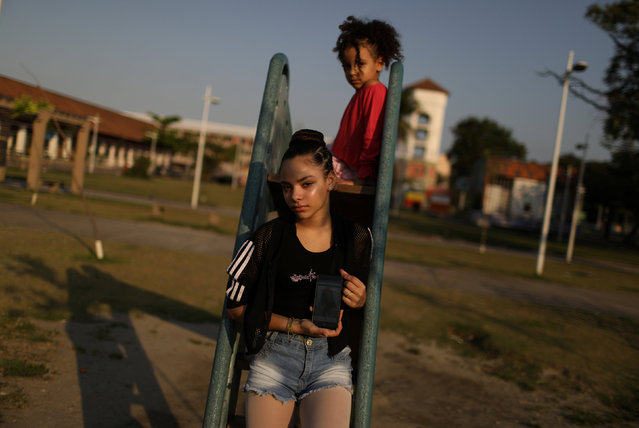 On the morning of April 8, 12-year-old Eduarda Lopes watched as her mother, Valdilene da Silva, was shot by a stray bullet in Rio de Janeiro's Manguinhos slum, one of the countless innocent victims of rising gangland violence in the city. As she lay dying in a puddle of blood, Silva used her last breaths to tell her daughter to run and hide. But despite her fear of being killed, Lopes stayed with her mother. “I waited with her until the final moment, by her side”, Lopes told Reuters, as tears streamed down her face. “I couldn't bear it”, Lopes said, of when she got to see her mother's corpse later that day. “I saw her lying there and she looked like a doll, asleep. The only thing I could take with me were the earrings she was wearing”. Brazil's violence is spiking and ever more victims are caught in the crossfire of gangs warring with each other or police. Rio de Janeiro state registered over 4,500 murders during the first eight months of 2018, up 6 percent compared with the same period in 2017. More than 1,000 people died in confrontations with police in the state between January and August, official data shows, up over 50 percent on the same period in 2017. Authorities say those killed are mostly suspected drug gang members, while critics allege innocent people are also slain. Here: Eduarda Lopes, 12, poses for a photograph as she holds up a picture of her mother on her phone in the Manguinhos slum in Rio de Janeiro, Brazil, September 13, 2018. Lopes's mother, Valdilene da Silva, was killed in crossfire as they walked together. (Photo by Pilar Olivares/Reuters) 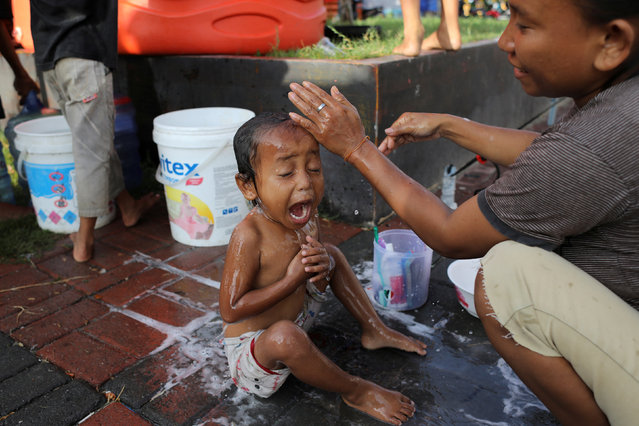 A child reacts while taking a shower at a camp for displaced earthquake and liquefaction victims in Palu, Central Sulawesi, Indonesia, October 12, 2018. (Photo by Jorge Silva/Reuters) 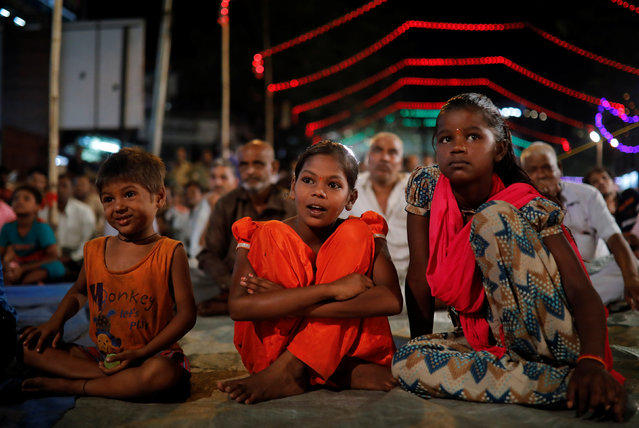 Children sit at the roadside as they watch Ramlila, a re-enactment of the life of Hindu Lord Rama, during Vijaya Dashmi or Dussehra festival celebrations in Mumbai, India, October 16, 2018. (Photo by Danish Siddiqui/Reuters) 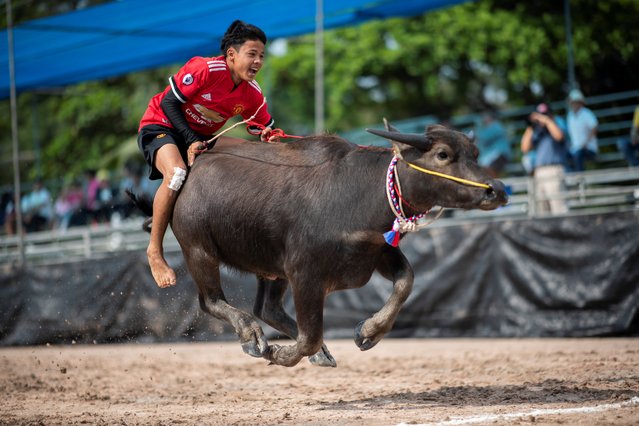 A jockey rides a buffalo during the annual buffalo races in Chon Buri on October 23, 2018. Several hefty buffaloes thunder down a dirt track in eastern Thailand, kicking up dust as they are urged toward the finish line by whip-wielding jockeys perched on their backs. (Photo by Jewel Samad/AFP Photo) 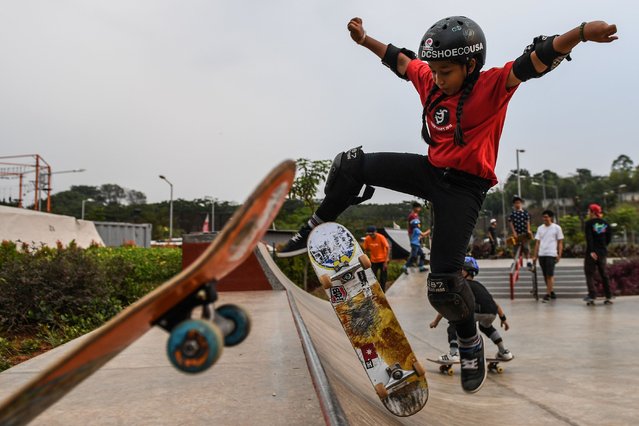 This picture taken on August 17, 2018 shows Indonesian skateboarder Aliqqa Noverry, 9, demonstrating her skills at a public park ahead of the 2018 Asian Games in Jakarta. The youngest competitor at this year's event in Jakarta, the pint-sized adrenaline junkie Noverry loves nothing better than to rip into jumps at breakneck speed, her pigtails billowing behind her. (Photo by Mohd Rasfan/AFP Photo)
Edit Del
30 Oct 2018 00:05:00, post received 0 comments
Publication archive:
←   →
Popular tags:
All tags
Last searches: