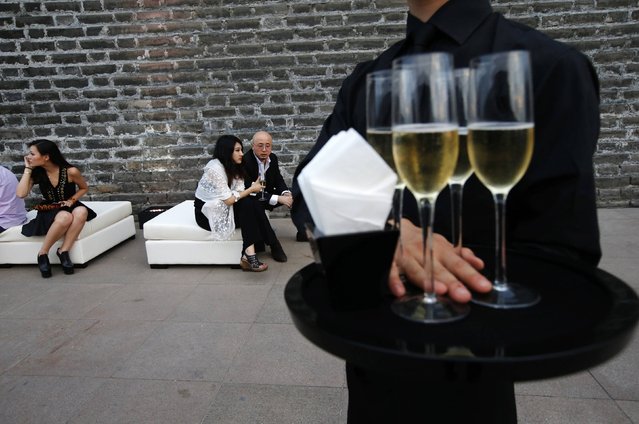 A bartender holds champagne for guests during a reception prior to a fashion show held at the Ming Dynasty City Wall Relics Park in Beijing in this June 21, 2013 file photo. An expected slowdown in growth of the world's second-largest economy means full-year growth would undershoot the government's 7.5 percent target and mark the weakest expansion in 24 years. (Photo by Kim Kyung-Hoon/Reuters) 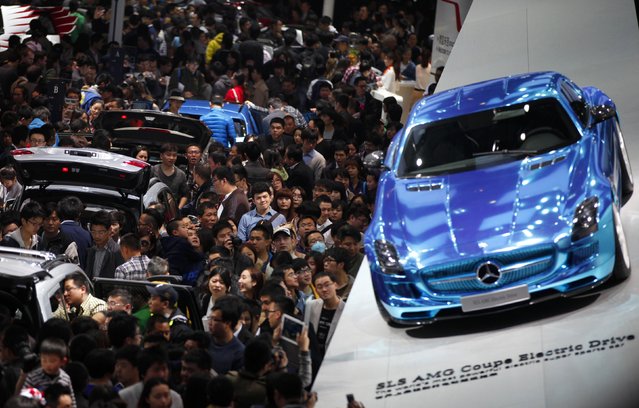 People looks at Mercedes-Benz cars during the the 15th Shanghai International Automobile Industry Exhibition in Shanghai in this April 21, 2013 file photo. (Photo by Carlos Barria/Reuters) 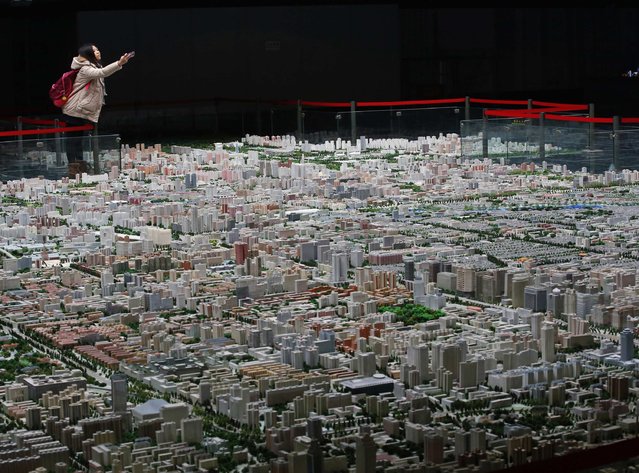 A visitor takes pictures of a model of Beijing's downtowns at the Beijing Planning Exhibition Hall, a museum showcasing the achievement of Beijing urban planning construction, in Beijing in this November 5, 2013 file photo. (Photo by Kim Kyung-Hoon/Reuters) 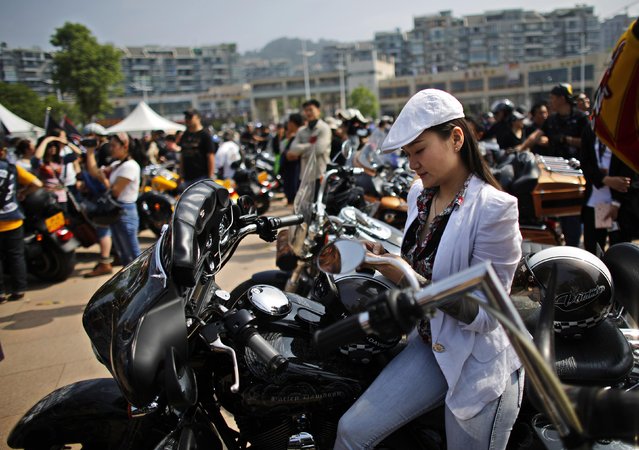 A woman sits on a Harley Davidson motorcycle during the annual Harley Davidson National Rally in Qian Dao Lake, in Zhejiang Province in this May 11, 2013 file photo. (Photo by Carlos Barria/Reuters) 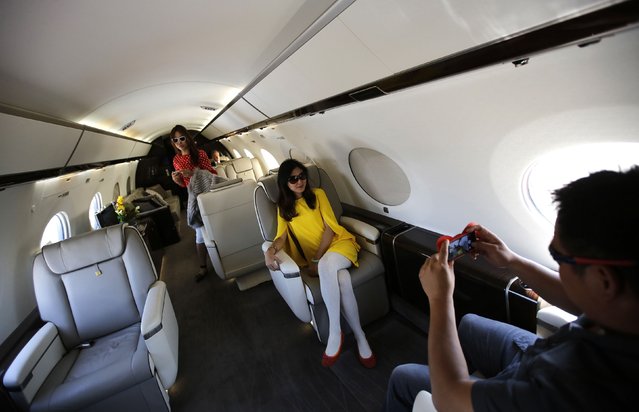 A visitor takes a photograph of another in a Gulfstream G650 aircraft at the Asian Business Aviation Conference and Exhibition (ABACE) at Hongqiao International Airport in Shanghai in this April 15, 2014 file photo. (Photo by Carlos Barria/Reuters) 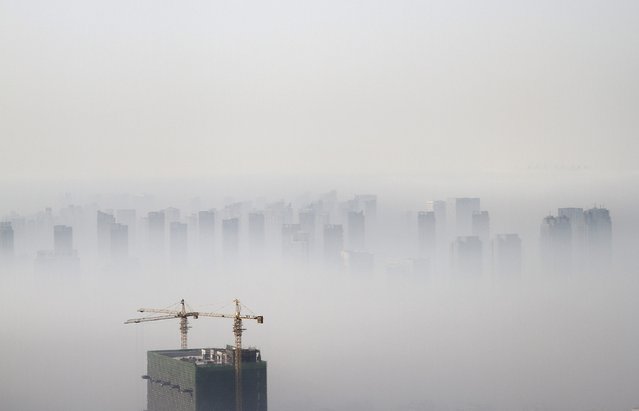 A building under construction is seen amidst smog on a polluted day in Shenyang, Liaoning province in this November 21, 2014 file photo. (Photo by Jacky Chen/Reuters) 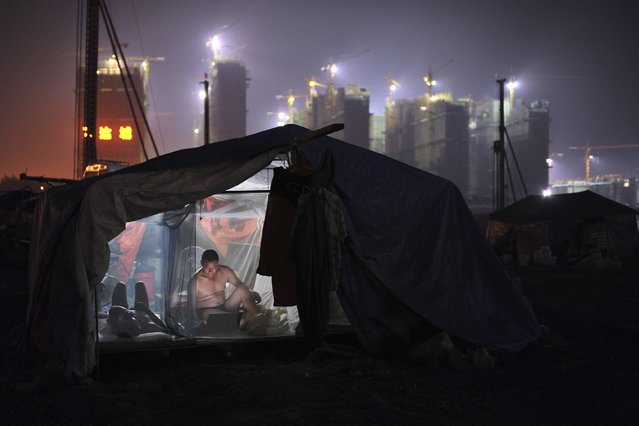 A worker uses a laptop inside his dormitory near a residential construction site in Hefei, Anhui province August 6, 2014. (Photo by Jianan Yu/Reuters) 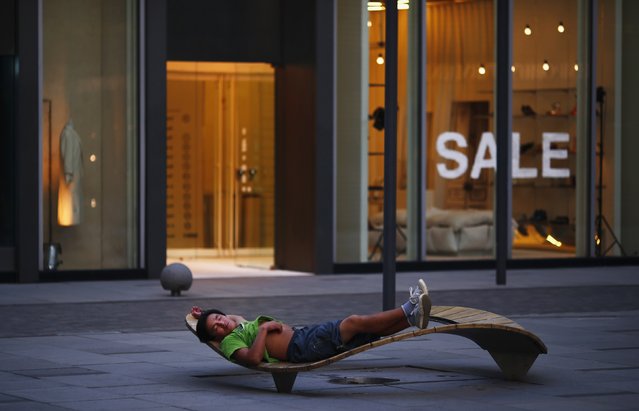 A man sleeps outside a boutique at Taikoo Li Sanlitun North, in Beijing, in this August 24, 2013 file photo. (Photo by Petar Kujundzic/Reuters) 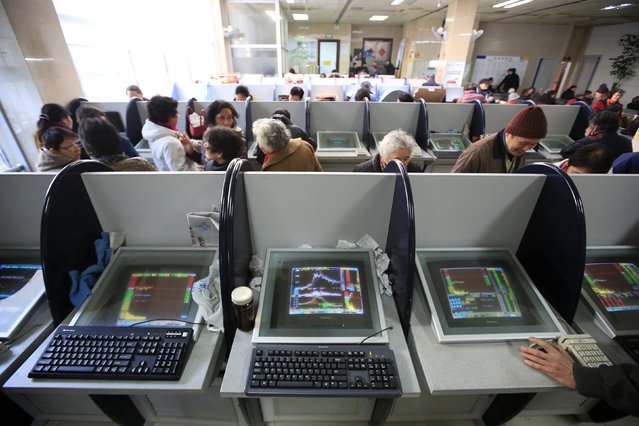 Investors look at computer screens showing stock information at a brokerage house in Shanghai, January 19, 2015. China stocks collapsed in early trade on Monday, with financials hammered after regulators cracked down on credit products that have been blamed for fuelling excessive market speculation over the past three months. (Photo by Aly Song/Reuters) 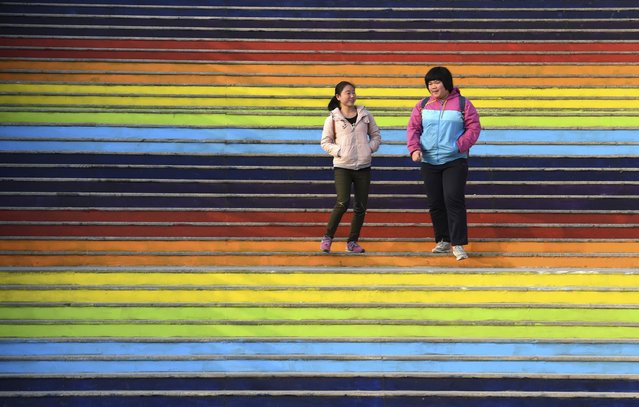 Students walk down a flight of stairs outside a dining hall at the campus of North China University of Water Resources and Electric Power in Zhengzhou, Henan province, January 17, 2015. (Photo by Reuters/Stringer) 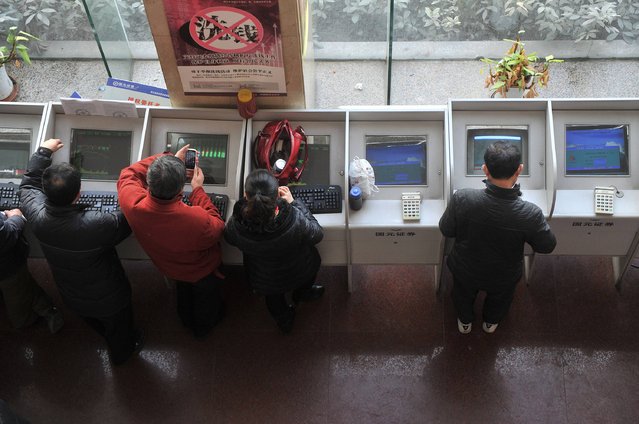 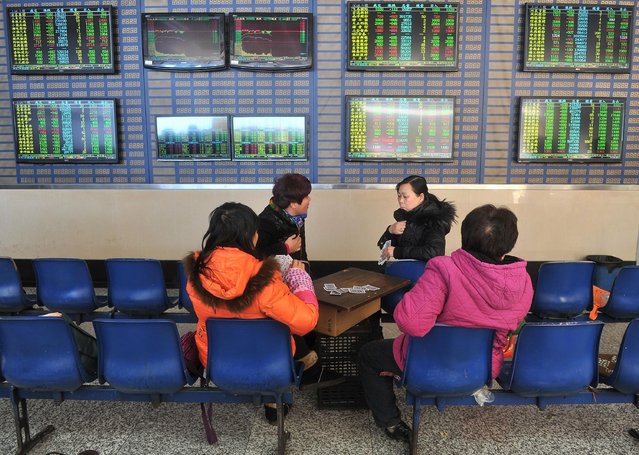 Investors play cards in front of a screen showing stock information at a brokerage house in Hefei, Anhui province, January 19, 2015. (Photo by Reuters/Stringer) 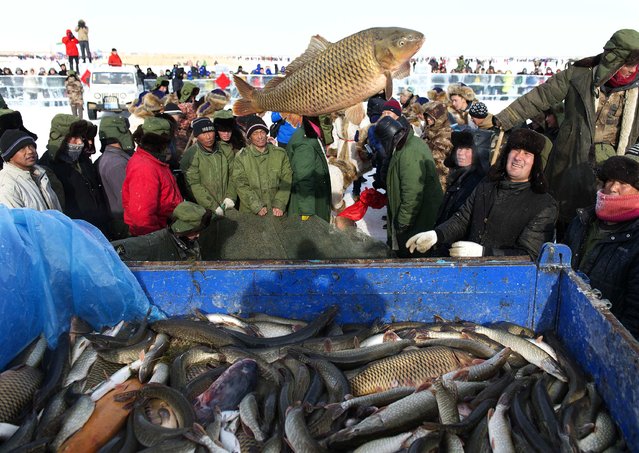 Fish are thrown onto a truck during a winter fishing festival held on the frozen Wulungu Lake in Fuhai county, Xinjiang Uighur Autonomous Region, January 18, 2015. (Photo by Reuters/China Daily) 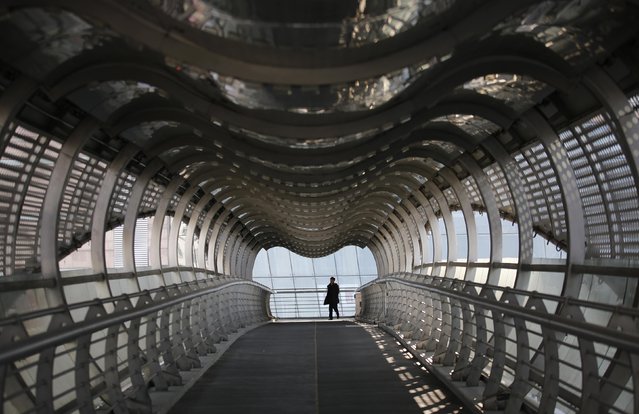 A man walks on a pedestrian bridge which is connected to a shopping mall in Beijing January 19, 2015. (Photo by Kim Kyung-Hoon/Reuters) 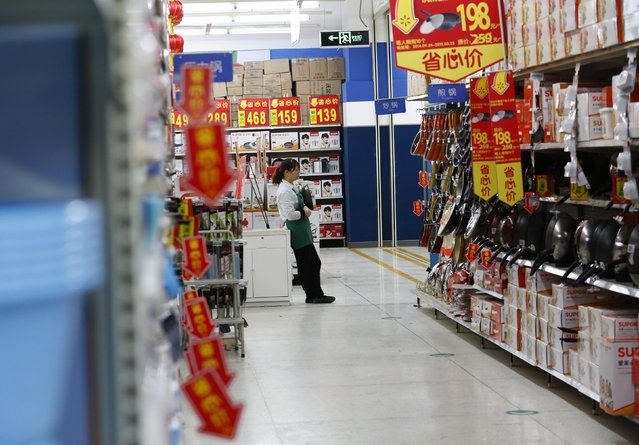 A sales promoter waits for customers at a discount department store in Beijing January 19, 2015. Beijing's efforts to put China's economy on a more sustainable growth path are focussing on shifting from investment-intensive manufacturing jobs to the services sector, but clumsy attempts to force the transition could do more harm than good. (Photo by Kim Kyung-Hoon/Reuters) 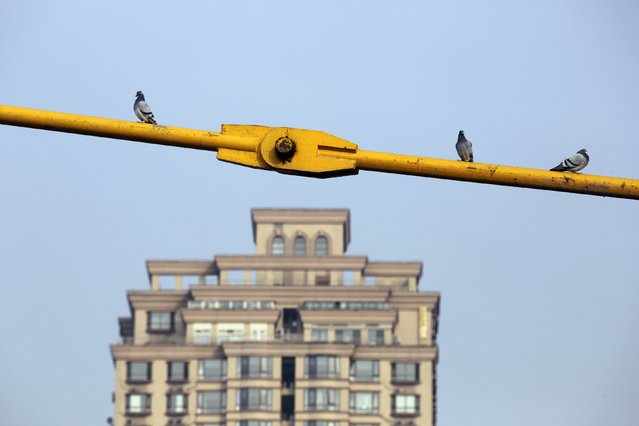 Pigeons rest near an apartment block in Beijing, January 20, 2015. Annual investment growth in China's real estate sector slowed to five-year low in December, even as year-end sales improved, helping to hold 2014 economic growth to the lowest in 24 years. (Photo by Jason Lee/Reuters) 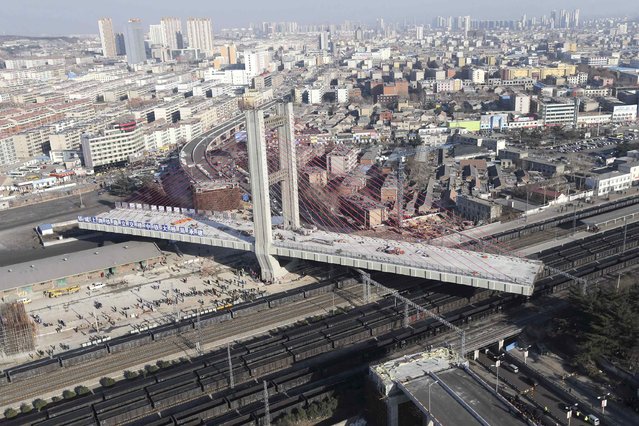 A part of an overpass under construction is turned around in Zoucheng, Shandong province January 19, 2015. (Photo by Reuters/China Daily) 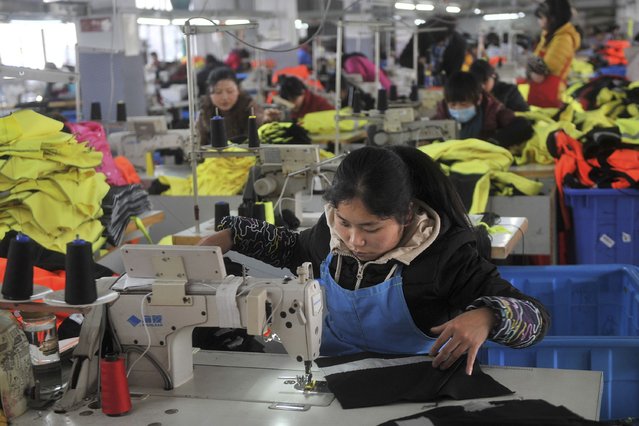 An employee works at a garment factory, which exports products to Europe, in Hefei, Anhui province January 19, 2015. (Photo by Reuters/Stringer) 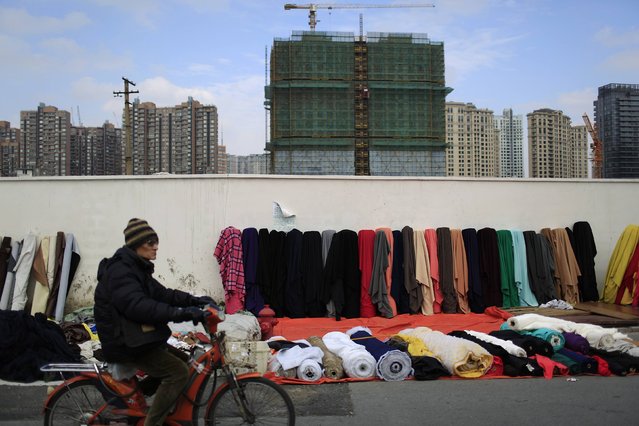 A man rides a motorcycle past textiles at a fabric stall in central Shanghai, January 20, 2015. (Photo by Aly Song/Reuters) 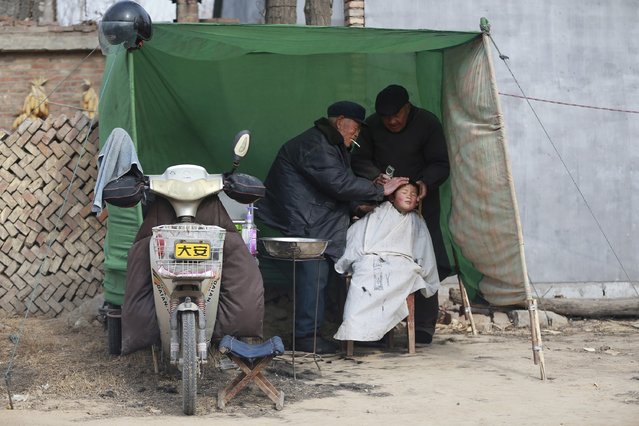 A boy reacts as he gets a haircut at a makeshift barber shop in a village market in Juancheng county, Shandong province, January 20, 2015. (Photo by Reuters/Stringer) 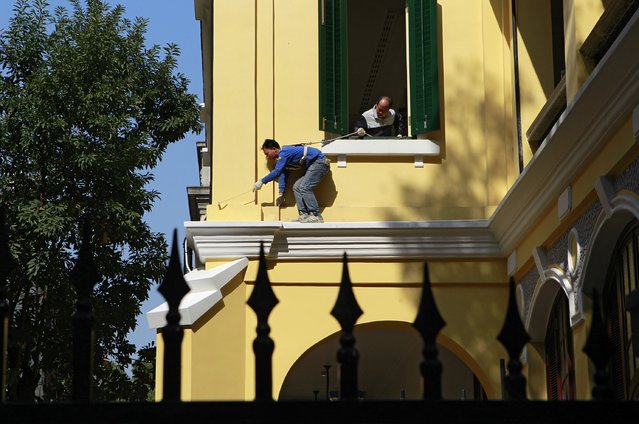 A construction worker is secured on a rope harness held by his colleague as he paints the facade of a building in Guangzhou, Guangdong province, January 20, 2015. (Photo by Alex Lee/Reuters) 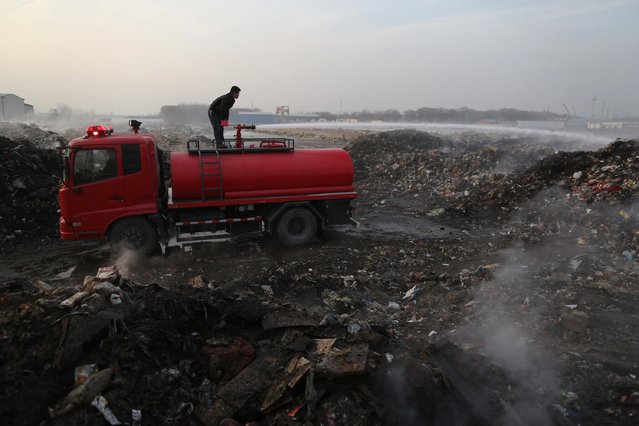 A worker sprays water as smokes rises at a waste transfer station in Beijing January 17, 2015. Biogas is produced inside the dump site when there are insufficient vehicles and manpower to transport the garbage away in time, according to an employee working at the station as quoted in local media. (Photo by Reuters/Stringer) 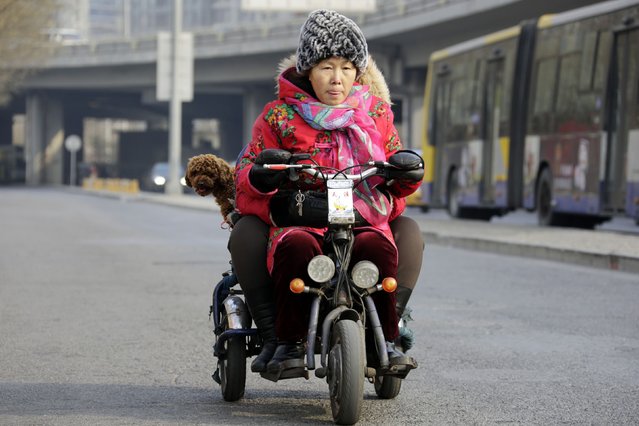 A woman rides an electric tricycle carrying a poodle on a road in Beijing January 20, 2015. (Photo by Jason Lee/Reuters) 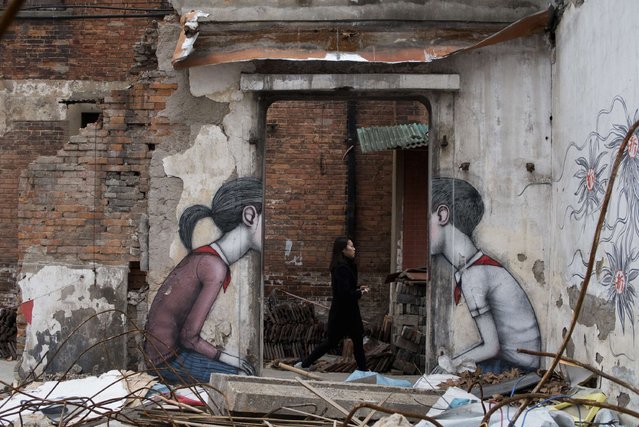 A woman walks past ruins at a demolition site of old residential buildings with graffiti on the wall, in Shanghai, January 20, 2015. (Photo by Reuters/China Daily) 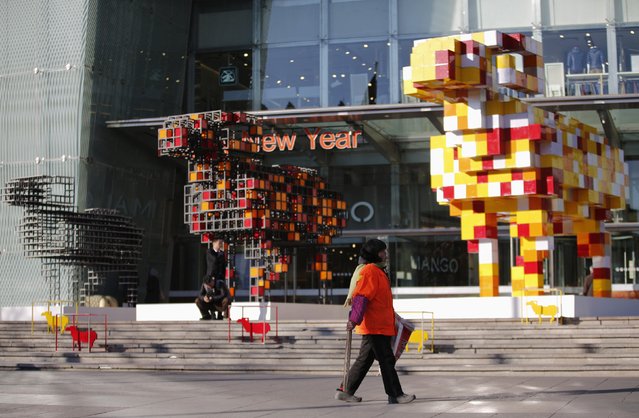 A cleaner walks past art installations celebrating the Chinese New Year of the Goat, at a shopping mall in Beijing January 21, 2015. China's sound economic fundamentals have not changed and the government will put more focus on structural reforms this year, Premier Li Keqiang was quoted on Wednesday as saying. (Photo by Kim Kyung-Hoon/Reuters) 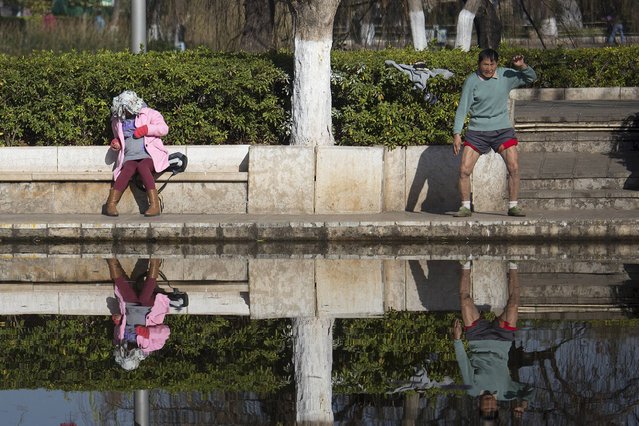 A man exercises as a woman rests at Cuihu Park in Kunming, Yunnan province January 22, 2015. (Photo by Wong Campion/Reuters) 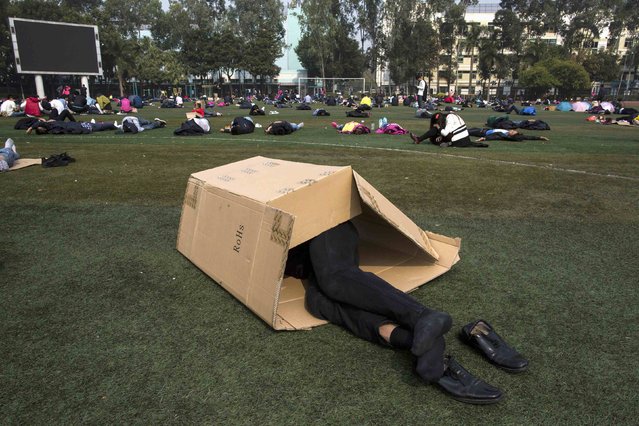 A worker takes a nap during lunch break, at a Foxconn factory in the township of Longhua in Shenzhen, Guangdong province January 21, 2015. (Photo by Tyrone Siu/Reuters) 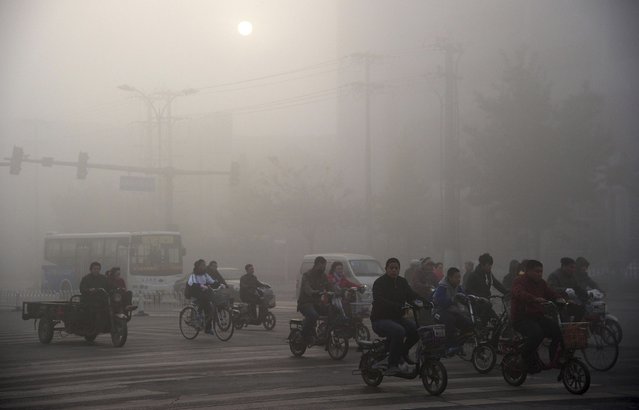 Residents ride bicycles along a street amid heavy haze in Xingtai, Hebei province in this November 3, 2013 file picture. China's pollution crisis has inspired an environmental regulator in a smog-blanketed northern province to write a novel whose extracts have gone viral online, spurring plans for two more books. Environmental degradation is fuelling people's discontent in China, where critics say years of breakneck economic growth have left a dire crisis. Major cities are shrouded in perennial smoke and half the groundwater in the country is tainted. “Smog Is Coming”, published last June, touches on fraud and bureaucracy and their impact on air pollution, with the official China Daily reporting that online excerpts have received tens of millions of pageviews. (Photo by Reuters/China Daily) 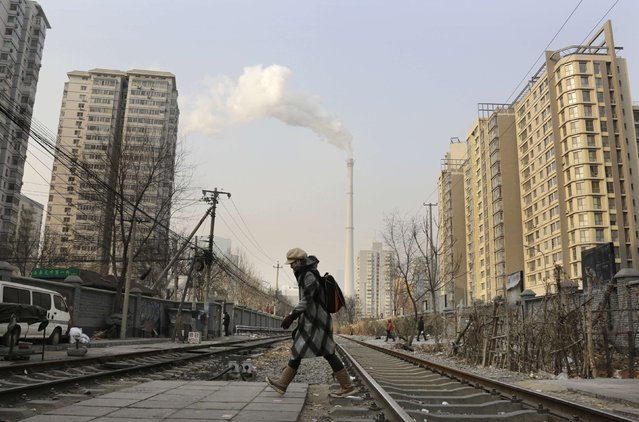