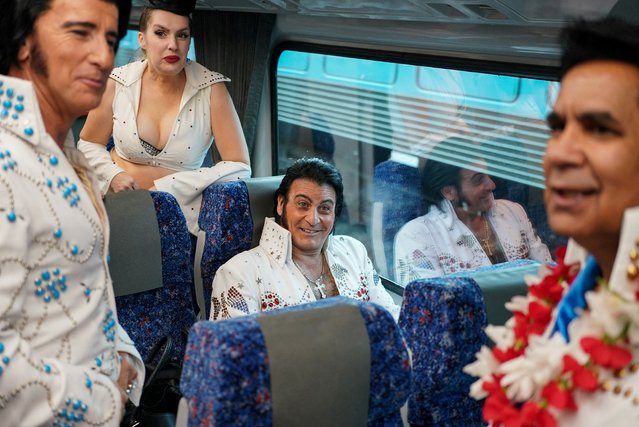 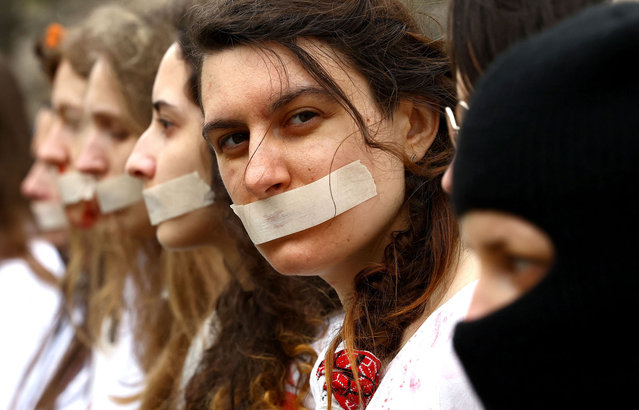 Women stage a protest during the women's demonstration “The real price of Russian gas and oil” to protest against Russia's invasion of Ukraine, in Berlin, Germany, April 21, 2022. (Photo by Lisi Niesner/Reuters) 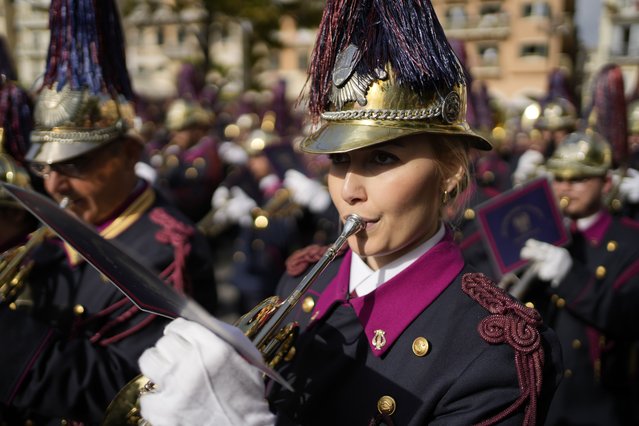 A member of a philharmonic band performs during the procession of Jesus' funeral bier, called the “Epitaph” in Greek, during Easter celebrations on the Ionian Sea island of Corfu, northwestern Greece, on Saturday, April 23, 2022. For the first time in three years, Greeks were able to celebrate Easter without the restrictions made necessary by the coronavirus pandemic. (Photo by Thanassis Stavrakis/AP Photo) 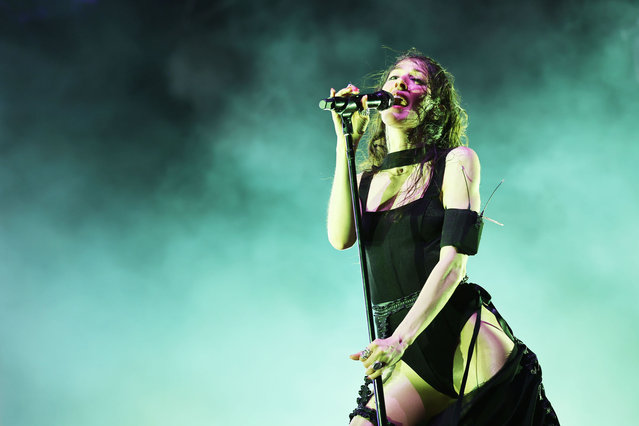 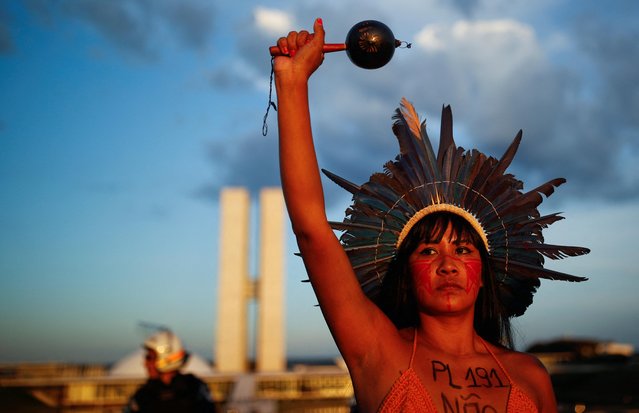 Jessica Kumaruara, from Kumaruara indigenous people, with the message “Not to PL 191” written on her chest, takes part in a protest against Brazil's President Jair Bolsonaro and for land demarcation in Brasilia, Brazil, April 9, 2022. (Photo by Amanda Perobelli/Reuters) 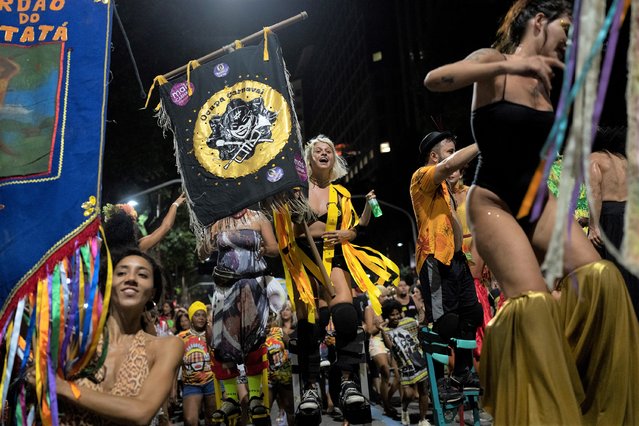 Revellers of street parties known as blocos, dance during a protest against restrictions by city officials in Rio de Janeiro, Brazil, Wednesday, April 13, 2022. City Hall has banned the street parties during Carnival celebrations, which were delayed by almost two months due to the pandemic. (Photo by Silvia Izquierdo/AP Photo) 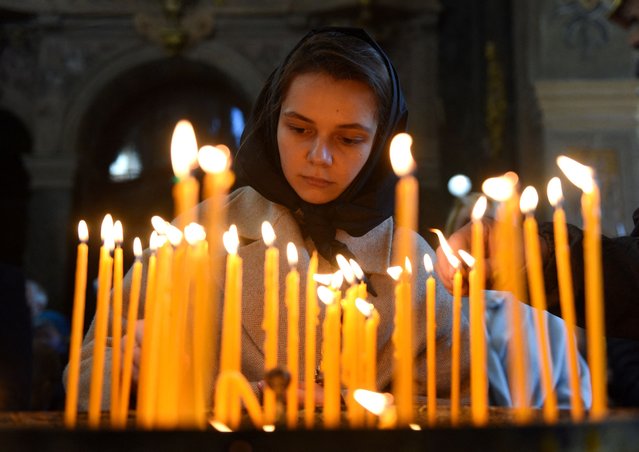 A youth light candles during a Sunday mass at Saints Peter and Paul Garrison Catholic Church in the western Ukrainian city of Lviv on March 27, 2022. (Photo by Yuriy Dyachyshyn/AFP Photo) 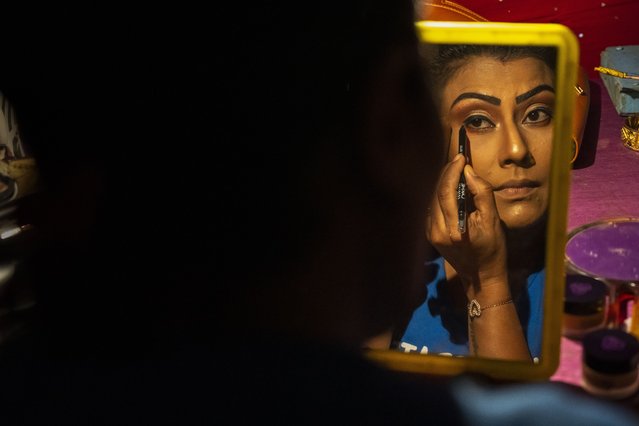 Prastuti Parashar, owner and lead actor of Awahan theater, prepares for a performance at Xetali village, east of Gauhati, India, Wednesday, April 6, 2022. Traveling theater groups in India's northeastern state of Assam are reviving the local art and culture scene after the COVID-19 pandemic forced a pause in their performances for a year and a half. “The public response has been very good. They love live performances. We have no competition from television and the digital boom”, said Parashar. (Photo by Anupam Nath/AP Photo) 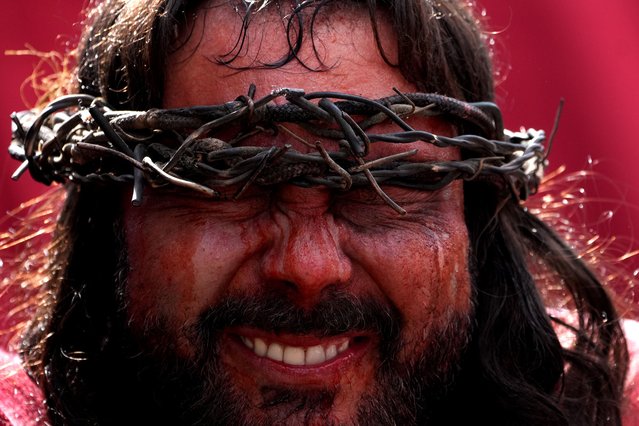 Portraying Jesus Christ, a parishioner reenacts the steps of Jesus Christ's final hours, in the traditional Good Friday procession, or the Stations of the Cross, in Pirenopolis, Brazil, Friday, April 15, 2022. Christians all over the world attend ceremonies that mark the day Jesus Christ was crucified, commonly known as Good Friday. (Photo by Eraldo Peres/AP Photo) 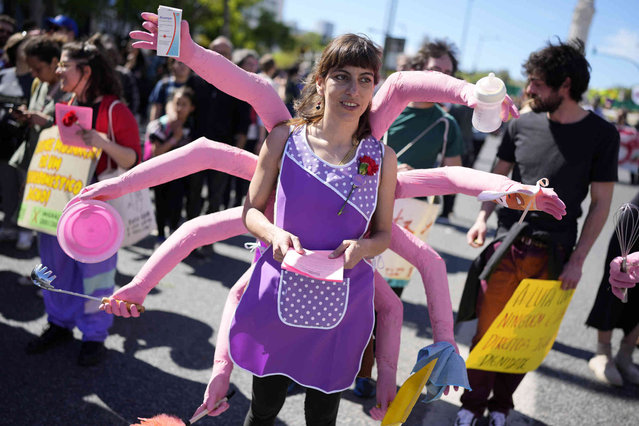 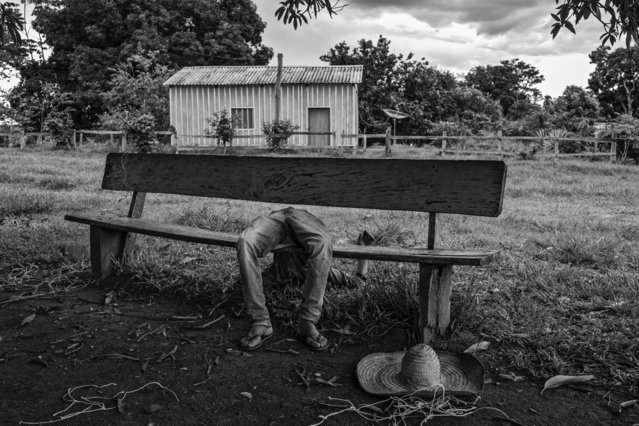 This image provided by World Press Photo, part of a series titled Amazonian Dystopia, by Lalo de Almeida for Folha de Sao Paulo/Panos Pictures which won the World Press Photo Long-Term Project award,, shows A member of the Quilombola community – an Afro-Brazilian community consisting of Black Brazilians, some of whom are descendants of enslaved peoples from the African continent – lies passed out drunk on a bench, in Pedras Negras, Sao Francisco do Guapore, Rondonia, Brazil, January 29, 2021. The process of providing land deeds to communities started by former enslaved people was already slow before Jair Bolsonaro's election. It has now stalled completely, as a result of the president's resolve not to demarcate further land for such communities in the Amazon. (Photo by Lalo de Almeida for Folha de Sao Paulo/Panos Pictures/World Press Photo via AP Photo) 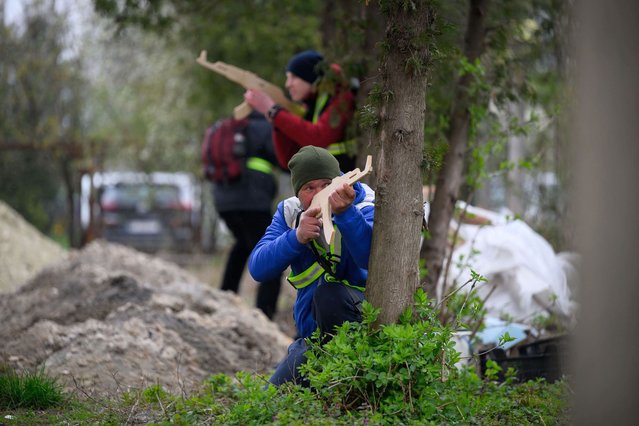 A group of civilians receive combat technique training fro a Czech military instructor, using wooden assault rifles outside a former gym on April 21, 2022 in Lviv, Ukraine. Lviv, which has been spared the brunt of the Russian attack on Ukraine, has served as a staging ground and relative haven throughout the war. (Photo by Leon Neal/Getty Images) 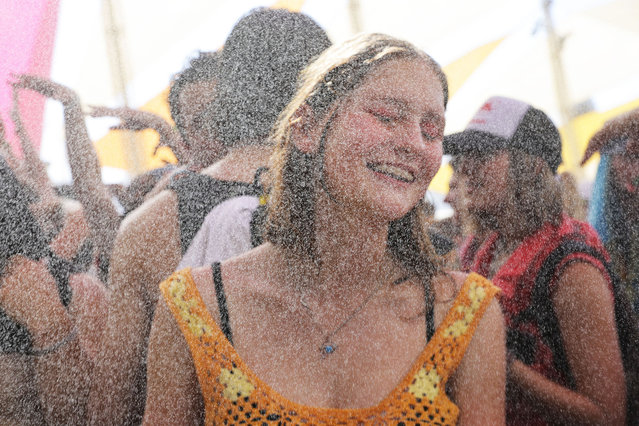 Festivalgoers at the DoLaB Stage at the 2022 Coachella Valley Music and Arts Festival on April 17, 2022 in Indio, California. (Photo by Amy Sussman/Getty Images for Coachella) 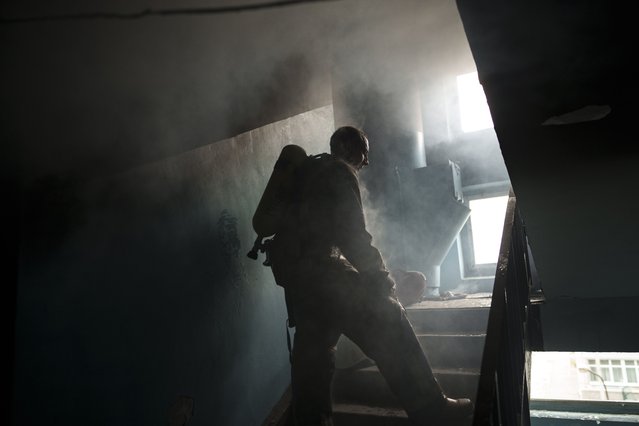 A firefighter pauses to cool down while extinguishing a fire in an apartment after a Russian bombardment in Kharkiv, Ukraine, Thursday, April 21, 2022. (Photo by Felipe Dana/AP Photo) 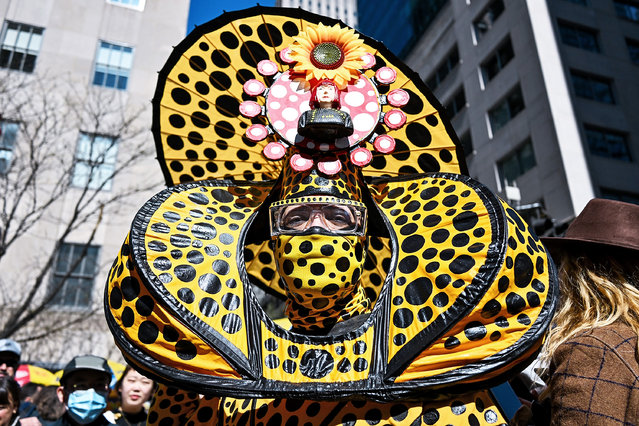 A man wears flip flops as he waits at a set of traffic lights outside Greenwich Park in South East London, United Kingdom on October 2, 2021. (Photo by London News Pictures) 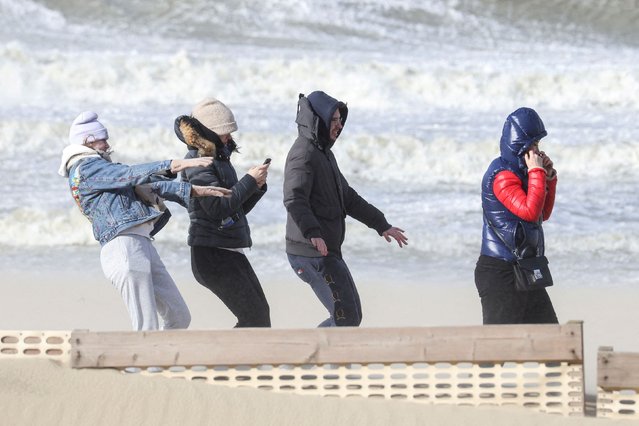 People walk as waves break on the beach in the wake of Storm Eunice in Blankenberge, Belgium, February 18, 2022. (Photo by Yves Herman/Reuters) 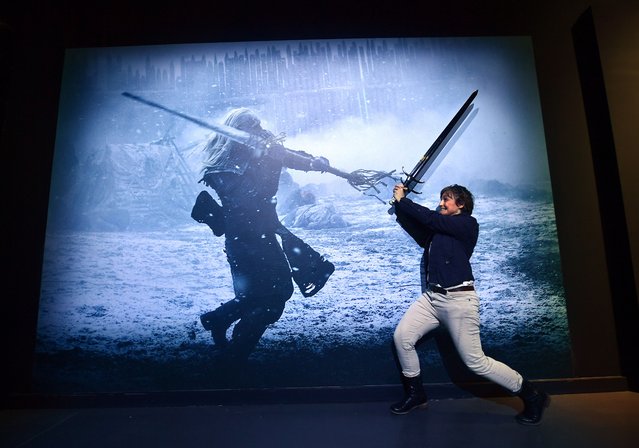 One of the interactive displays is seen during a media preview day for the opening of the new Game of Thrones Studio Tour at Linen Mill Studios on February 2, 2022 in Banbridge, Northern Ireland. Created in partnership with Warner Bros. Themed Entertainment, the worlds first and only Game of Thrones Studio Tour is located at Linen Mill Studios in Banbridge, Northern Ireland, where a significant proportion of the shows Northern Ireland based filming took place. At over 100,000 sq ft, the interactive experience reveals the world of Westeros like never before, giving fans and visitors the chance to explore the famous sets of Kings Landing, Winterfell, Dragonstone, The Wall and beyond. The Studio Tour showcases the exquisite sets and creative artistry behind the incredible costumes, props, weaponry and visual effects which brought the story of Game of Thrones to life. (Photo by Charles McQuillan/Getty Images) 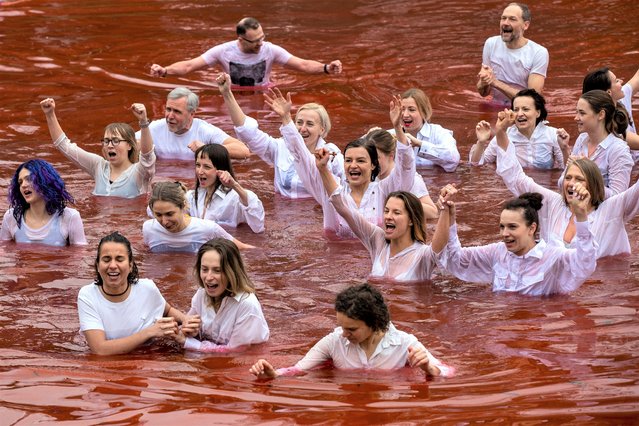 People bathe in a pond, colored red to signify blood, during a protest performance against the Russian invasion of Ukraine in front of the Russian embassy in Vilnius, Lithuania, Thursday, April 7, 2022. Ukrainian officials said the bodies of 410 civilians were found in Kyiv-area towns that were recently retaken from Russian forces. (Photo by Mindaugas Kulbis/AP Photo) 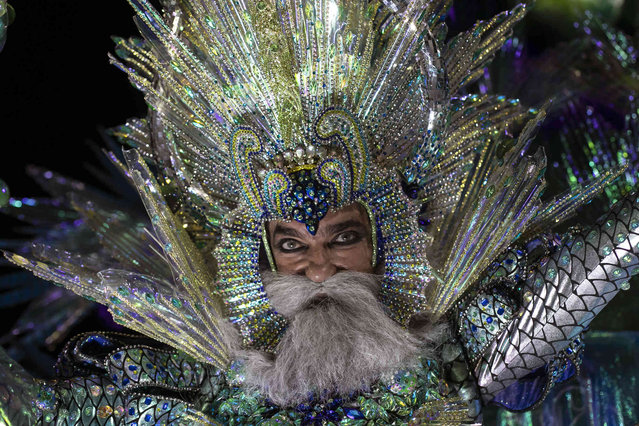