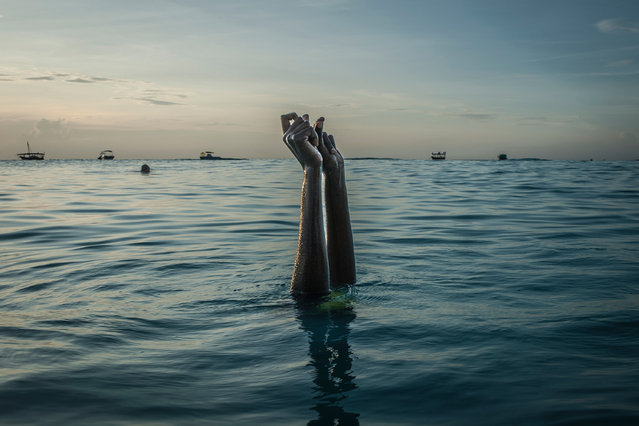 A girl wearing a full-length swimsuit learns to swim in the Zanzibar archipelago, Tanzania. (Photo by Anna Boyiazis) 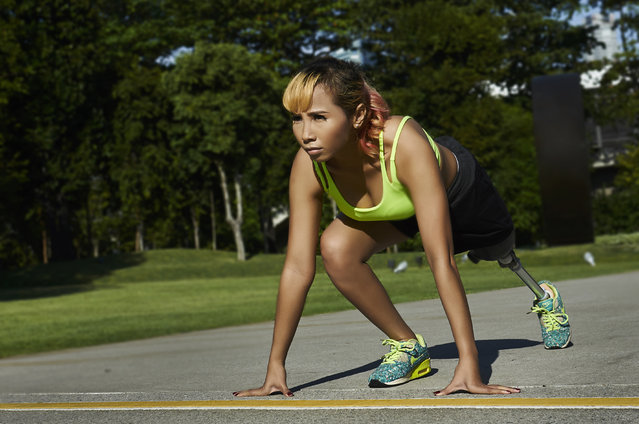 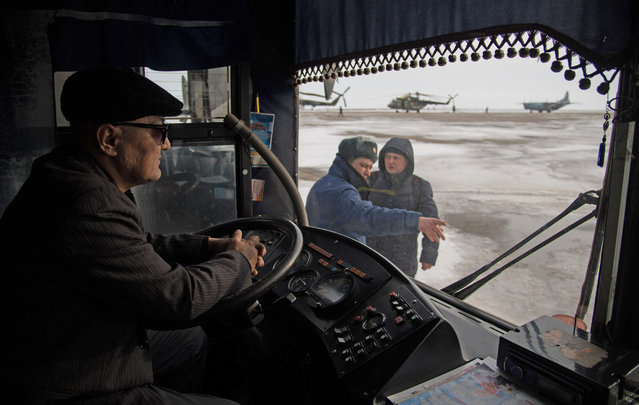 NASA, Roscosmos, and Russian Search and Rescue teams arrive in Zhezkazgan, Kazakhstan to prepare for the Soyuz MS-06 landing with Expedition 54 crew members Joe Acaba and Mark Vande Hei of NASA and cosmonaut Alexander Misurkin, Monday, February 26, 2018. Acaba, Vande Hei, and Misurkin are returning after 168 days in space where they served as members of the Expedition 53 and 54 crews onboard the International Space Station. (Photo by Bill Ingalls/NASA) 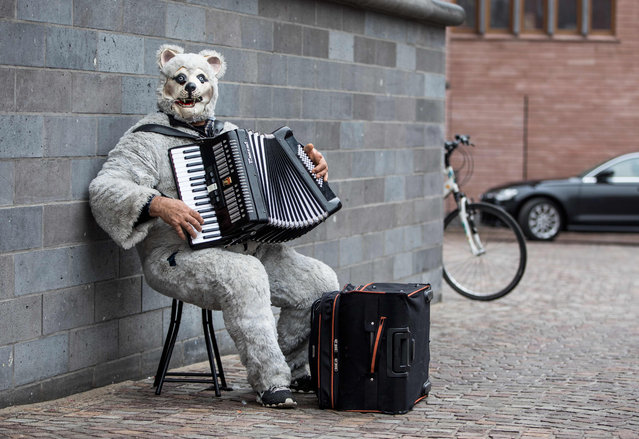 A street musician wears a costume as he plays his accordion in Frankfurt, Germany on February 16, 2018. (Photo by Frank Rumpenhorst/AFP Photo) A model falls while presenting a creation from Mexican designer Alberto Rodriguez's spring/summer 2010 collection during a fashion show in Mexico City, October 19, 2009. (Photo by Eliana Aponte/Reuters) 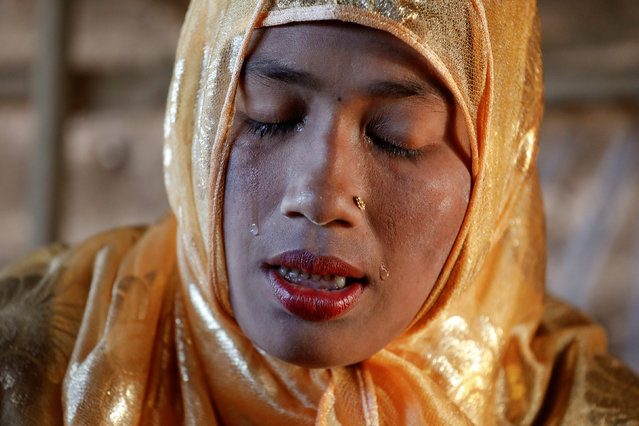 Rahima cries, after the body of her nephew, an 11-month-old Rohingya refugee Abdul Aziz was brought back to the family shelter at the Balukhali refugee camp near Cox's Bazar, Bangladesh, a few hours after he died December 4, 2017. Aziz, whose family fled Myanmar some two months ago, died at a local clinic after suffering from high fever and severe cough for ten days, his mother said. (Photo by Damir Sagolj/Reuters) 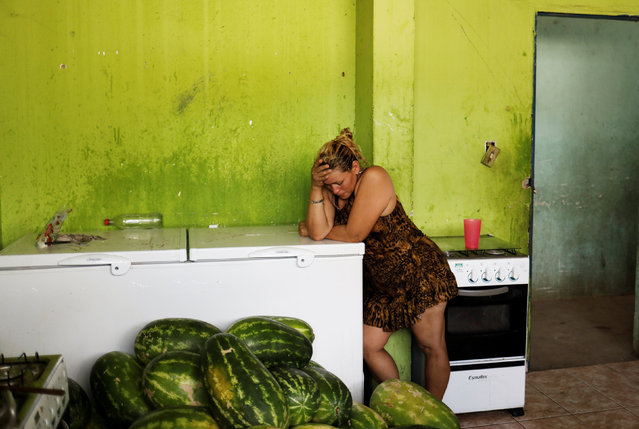 A Venezuelan woman stands in a kitchen of a gym which has turned into a shelter for Venezuelans and is run by Civil Defense with meals provided by Evangelical churches in Caimbe neighbourhood in Boa Vista, Roraima state, Brazil November 17, 2017. (Photo by Nacho Doce/Reuters) 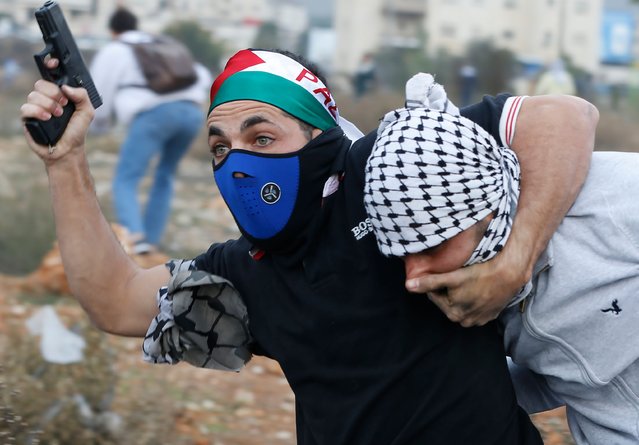 An undercover Israeli policeman detains a Palestinian protestor during clashes following a demonstration in the West Bank city of Ramallah on December 13, 2017, as protests continue in the region amid anger over US President Donald Trump's recognition of Jerusalem as its capital. (Photo by Abbas Momani/AFP Photo) 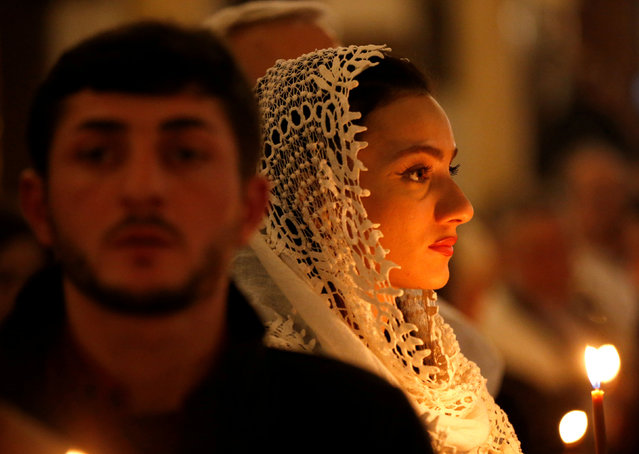 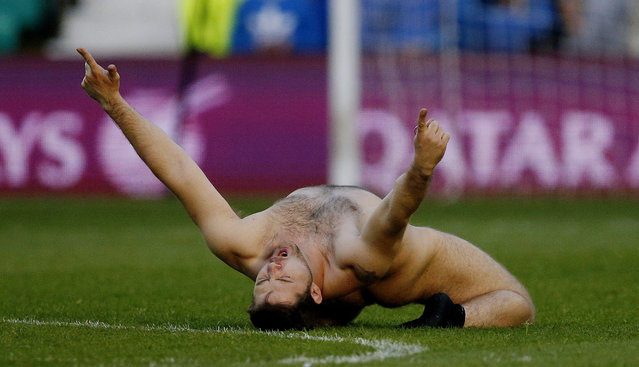 A male streaker on the pitch during a Scotland-Qatar friendly in Edinburgh, June 2015. (Photo by Russell Cheyne/Reuters) 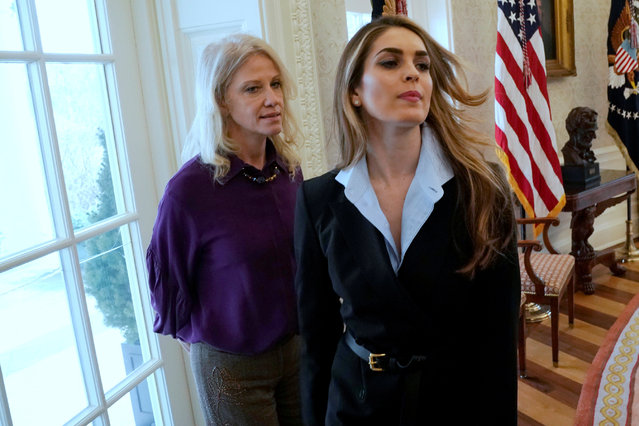 White House Communications Director Hope Hicks (C) departs as she and White House counselor Kellyanne Conway stand on the sidelines while President Donald Trump speaks to reporters in the Oval Office at the White House in Washington, February 9, 2018. (Photo by Jonathan Ernst/Reuters) Antonio Borges Serum, of the ethnic group “Hunikui” from Acre, Brazil, listens to a speech during a meeting by Amazonian indigenous in Puerto Maldonado, Madre de Dios province, Peru, Thursday, Jan. 18, 2018, one day ahead of Pope Francis' arrival to Peru's Amazon. (Photo by Rodrigo Abd/AP Photo) 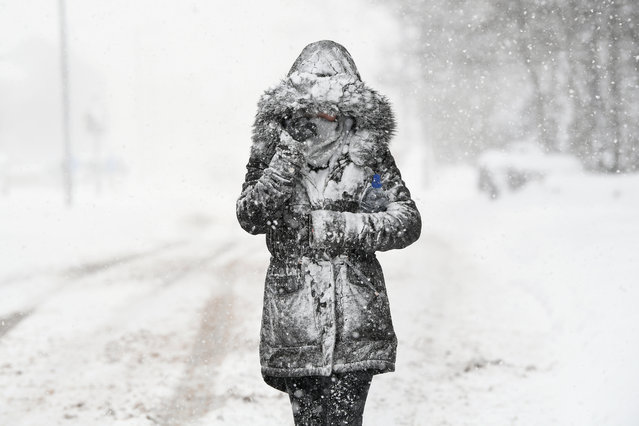 A woman makes her way through the snow on March 1, 2018 in Balloch, Scotland. Freezing weather conditions dubbed the “Beast from the East” combines with Storm Emma coming in from the South West of Britain to bring further snow and sub-zero temperatures causing chaos on roads and shutting schools. Red weather warnings for snow have been seen in the UK for the first time and five people have died as a result. (Photo by Jeff J. Mitchell/Getty Images) 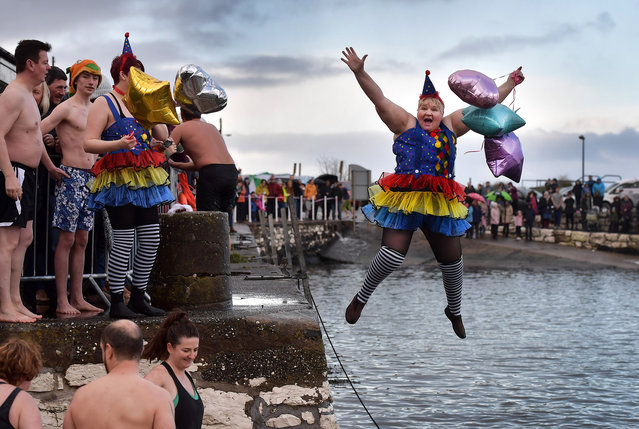 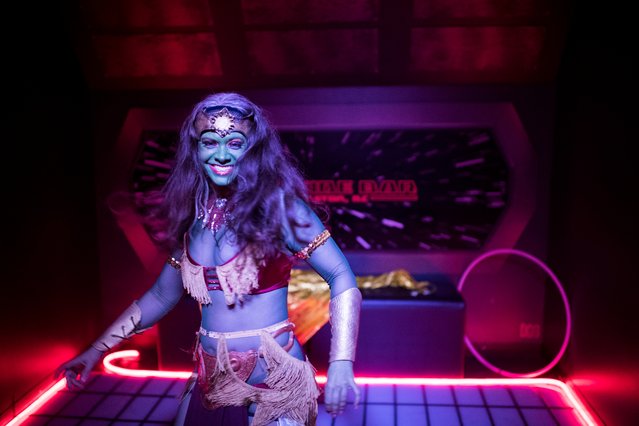 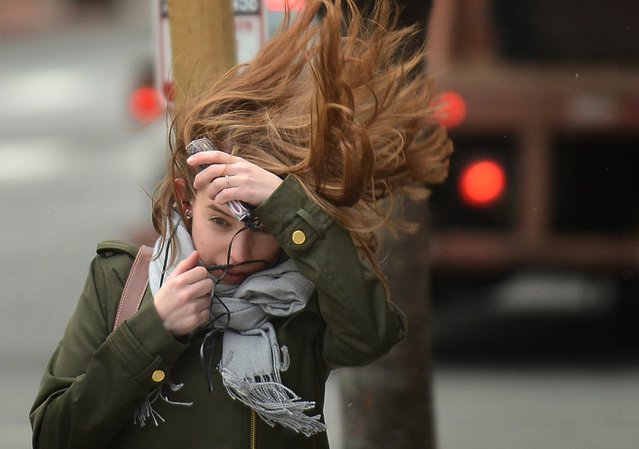 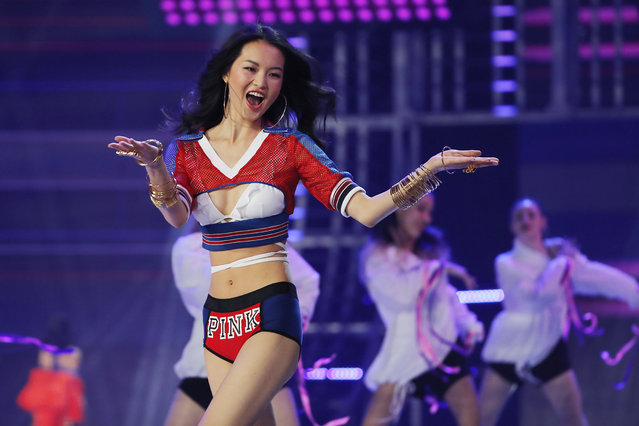 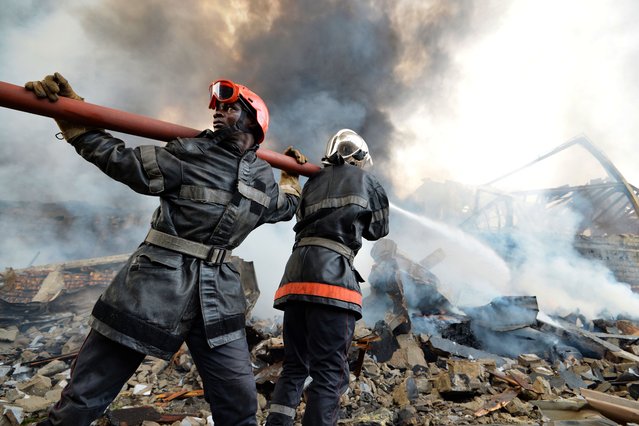 Firefighters battle the remnants of a fire at the Drocolor paint factory on December 6, 2017 in Abidjan. A huge fire ripped through a paint factory in the Ivorian capital on December 6, causing multiple explosions, and witnesses said several people were badly burnt. There was no immediate word on the tally of people caught in the blaze, which sent a thick column of smoke high above Abidjan's industrial zone, an AFP correspondent said. (Photo by Sia Kambou/AFP Photo) 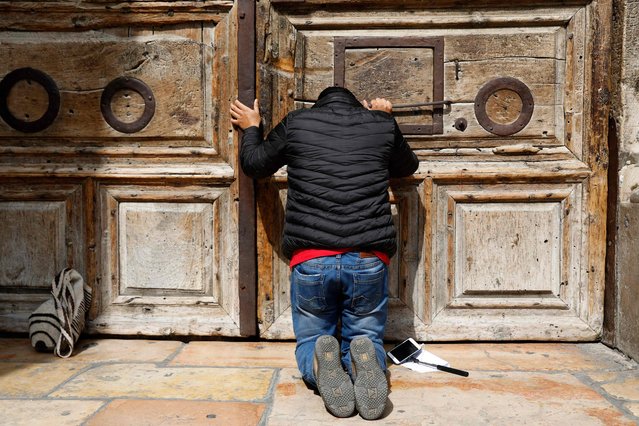 A pilgrim prays outside the closed gate of the Church of the Holy Sepulchre in Jerusalem's Old City on February 25, 2018. Christian leaders took the rare step of closing the Church of the Holy Sepulchre, built at the site of Jesus's burial in Jerusalem, in protest at Israeli tax measures and a proposed property law. (Photo by Gali Tibbon/AFP Photo) 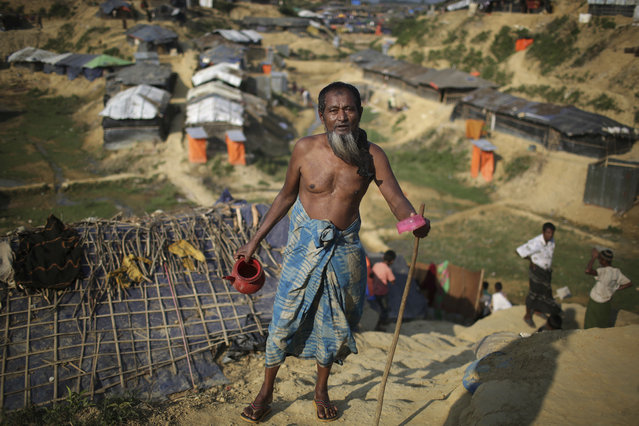 In this November 21, 2017, file photo, a Rohingya Muslim man carries his water pot and soap after a bath as he makes his way back to his tent, in Kutupalong refugee camp in Bangladesh. Since late August, more than 620,000 Rohingya have fled Myanmar's Rakhine state into neighboring Bangladesh, seeking safety from what the military described as “clearance operations”. The United Nations and others have said the military's actions appeared to be a campaign of “ethnic cleansing”, using acts of violence and intimidation and burning down homes to force the Rohingya to leave their communities. (Photo by Wong Maye-E/AP Photo) 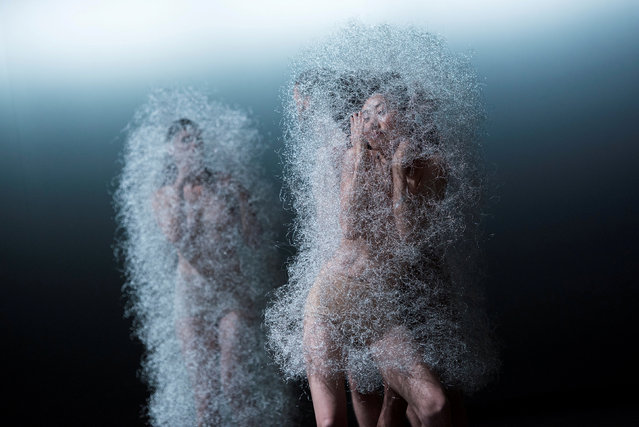