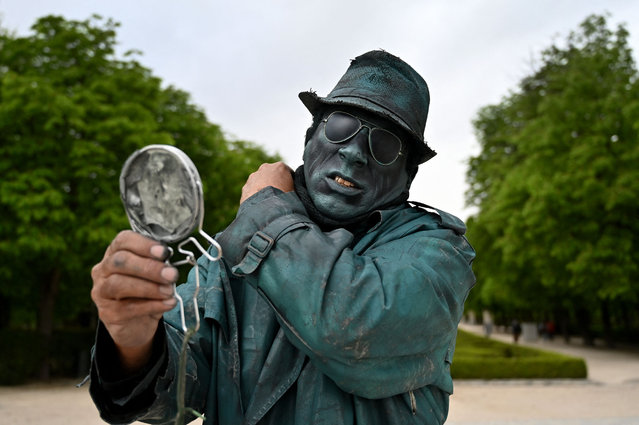 Cuban street performer Ricardo Elias Hardy, 57, dresses himself up to perform as a living statue at the Retiro park in Madrid on April 1, 2021. As a living-statue, Elias Hardy stands motionless, sporting realistic statue-like makeup to get tips from tourists and passers-by. (Photo by Gabriel Bouys/AFP Photo) 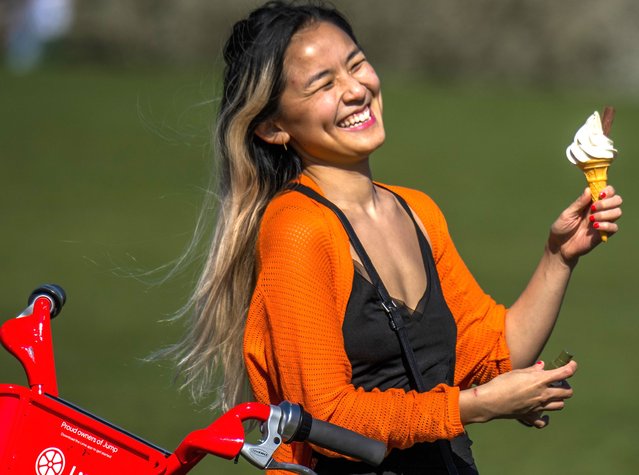 It is warm and the ice cream van is a magnet, sometimes social distancing is a bit challenging in Hampstead Heath, London on March 29, 2021. Fine weather in Hampstead encourages people to meet outdoors on the first day of the relaxation of lockdown restrictions, allowing people to meet in groups of up to six outdoors. (Photo by Guy Bell/Rex Features/Shutterstock) 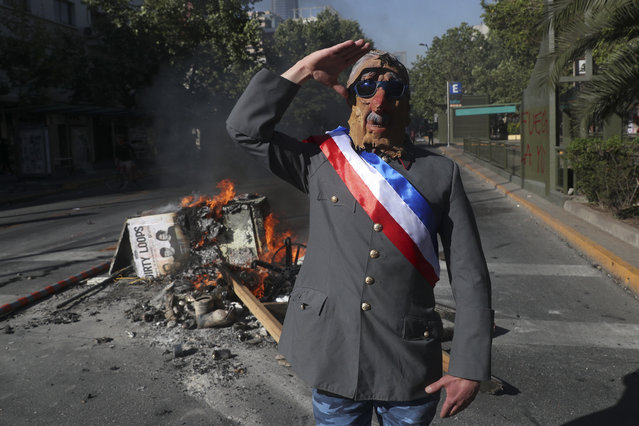 In this November 6, 2019 file photo, an anti-government demonstrator costumed as late military dictator Gen. Augusto Pinochet salutes in front of a burning street barricade placed by protesters demanding a new constitution in Santiago, Chile. Chileans will elect an assembly on April 11, 2021, tasked with writing fresh governing principles and putting them to a national vote in the first half of 2022 to replace the much-amended relic of military rule, the 1980 constitution. (Photo by Esteban Felix/AP Photo/File) 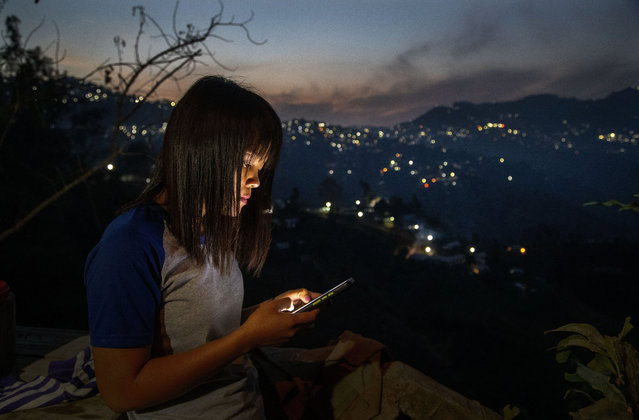 A police officer who fled Myanmar following a military coup looks at her phone at an undisclosed location bordering Myanmar, in the northeastern Indian state of Mizoram, Thursday, March 18, 2021. Villagers in Mizoram have given shelter to 34 Myanmar police personnel and 1 fire fighter, who crossed over to the state over the last two weeks. Those who escaped spend their time watching local television and doing daily chores. Some of them have carried mobile phones and are trying to connect to families they were forced to leave behind. At night, all of them go to sleep on mattresses laid on the floor of a single room. (Photo by Anupam Nath/AP Photo) 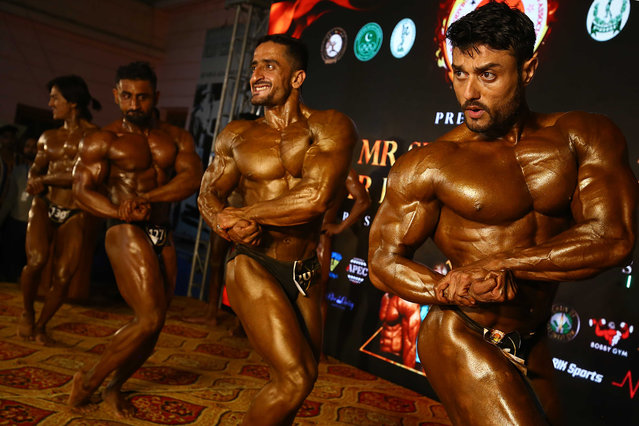 Bodybuilders pose during a body building competition in Karachi, Pakistan, 23 March 2021. The event was organized by the Karachi Body Building Association. (Photo by Shahzaib Akber/EPA/EFE) 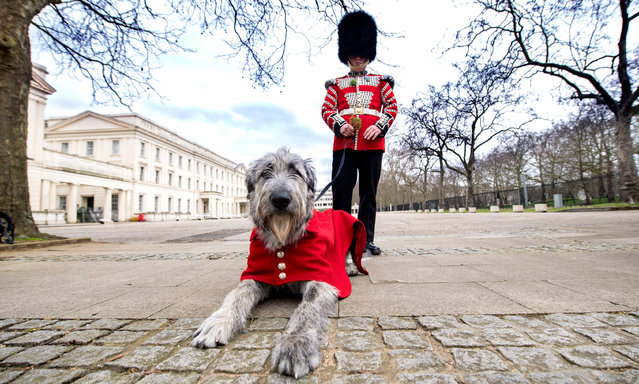 Irish Guards' new mascot, Irish Wolfhound Turlough Mor with his handler Drummer Adam Walsh at Wellington Barracks, London on Tuesday March 16, 2021, before being presented with his shamrock ahead of the Regiment's own private St Patrick's Day celebrations on Wednesday. (Photo by Ian West/PA Images via Getty Images) 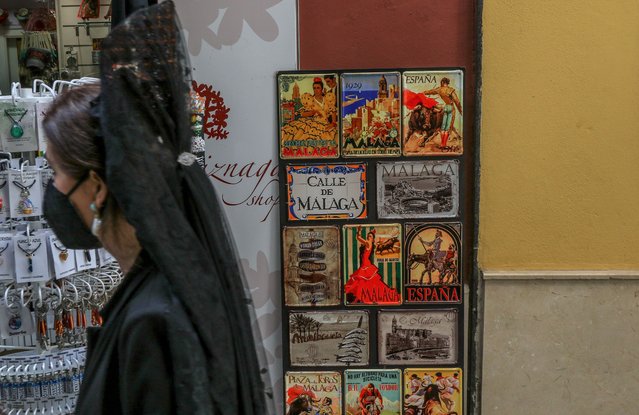 Mantilla women attend the Holy Offices of Good Friday on the occasion of Holy Week in Malaga, Spain on April 2, 2021. (Photo by Lorenzo Carnero/ZUMA Wire/Rex Features/Shutterstock) 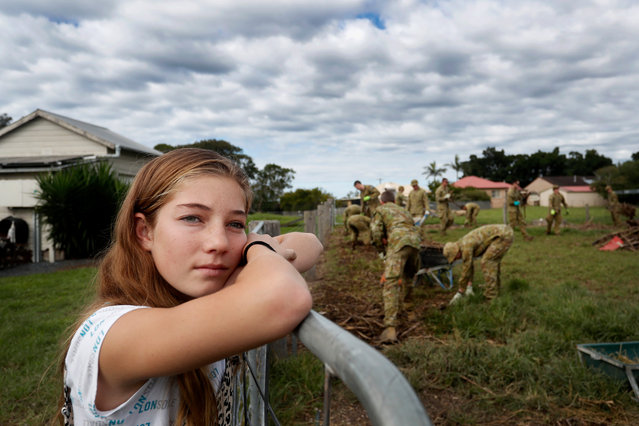 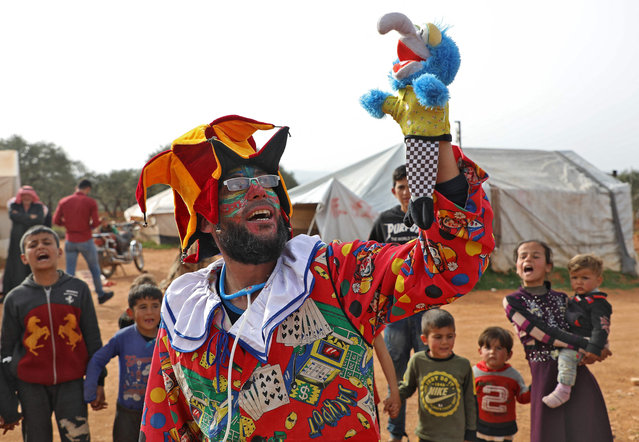 Syrian comedian Firas al-Ahmad, who dresses up as a clown to entertain children in camps for displaced Syrians in the rebel-held northwest of the country, performs in the main square of a camp in Kfar Jalis north of Idlib on March 22, 2021. The 39-year-old theatre actor aims at cheering up chidlren after years of fighting and displacement in Idlib province wrought chaos for the little ones, destroying schools and scattering destitute families across the countryside. (Photo by Zein Al Rifai/AFP Photo) 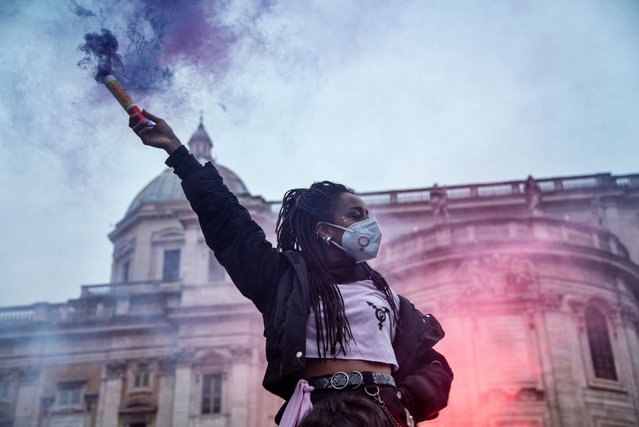 NonUnaDiMeno movement held a rally and a march in central Rome to mark the International Women's Day on March 8, 2021. The protest was called in support and solidarity with all the women, against patriarchy, to demand the end to male and gender-based violence against women and the Feminicides. (Photo by Federico Perruolo/Rex Features/Shutterstock) 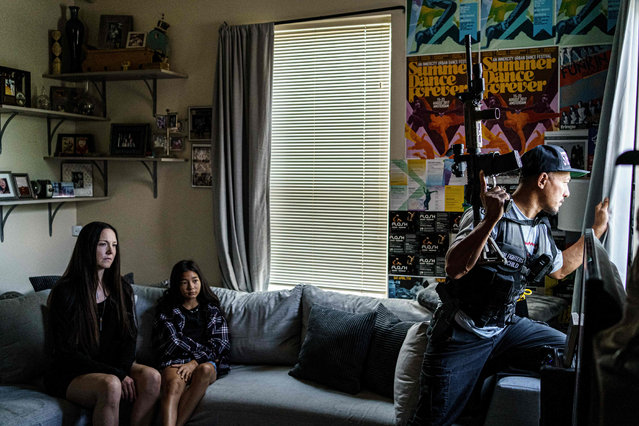 Minnesota Freedom Fighters (MNFF) member Step Child (R) (who doesn't want to have his real name published) 44, an IT operator from North Minneapolis, looks out of a window at his home, flanked by partner Erin Brennan, 49 (L), and step-daughter Mila Duron, 13, in Minneapolis, Minnesota, on July 29, 2020. Armed with AR-15 rifles and sporting bulletproof vests, members of the Minnesota Freedom Fighters (MNFF), a Black self-defense group formed after the death of George Floyd, describe themselves as a “bridge” between the police and the African-American community. (Photo by Kerem Yucel/AFP Photo) 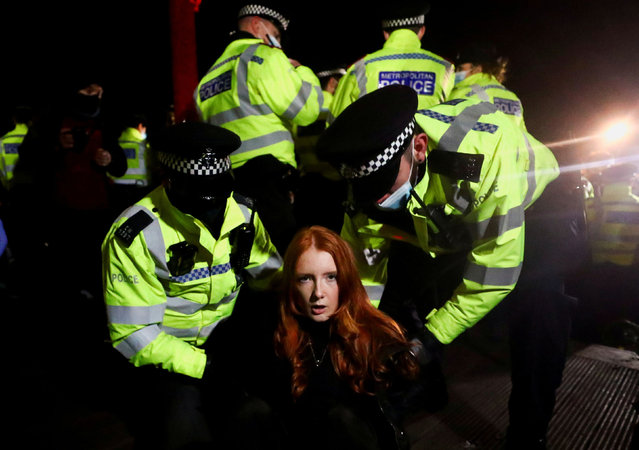 Police detain a woman as people gather at a memorial site in Clapham Common Bandstand, following the kidnap and murder of Sarah Everard, in London, Britain on March 13, 2021. (Photo by Hannah McKay/Reuters) 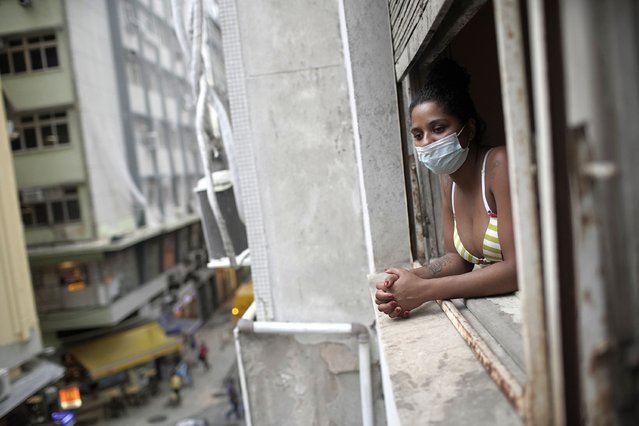 Actress Kelly Regina da Silva looks out from the window of her room in a building occupied by squatters in Rio de Janeiro, Brazil, Tuesday, March 16, 2021. Before the coronavirus pandemic hit da Silva had made it out of her working-class favela and landed a leading role in a play showing right across from Ipanema beach. (Photo by Silvia Izquierdo/AP Photo) 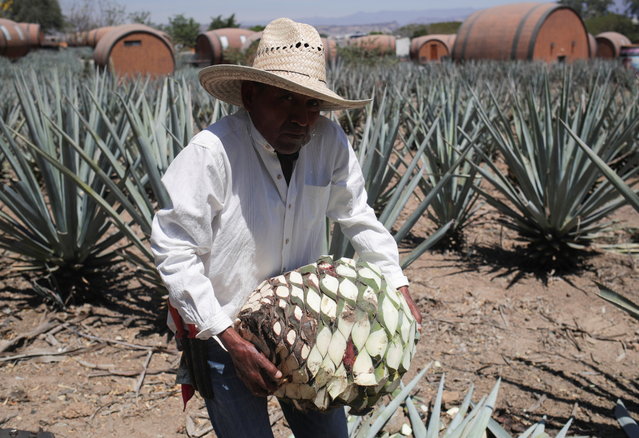 A farmer, also known as jimador, carries a blue agave on a plantation during a media tour at La Cofradia distillery in Tequila, Jalisco, Mexico, March 27, 2021. (Photo by Henry Romero/Reuters) 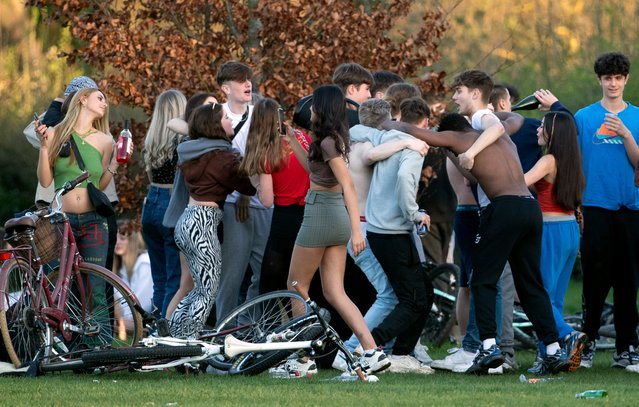