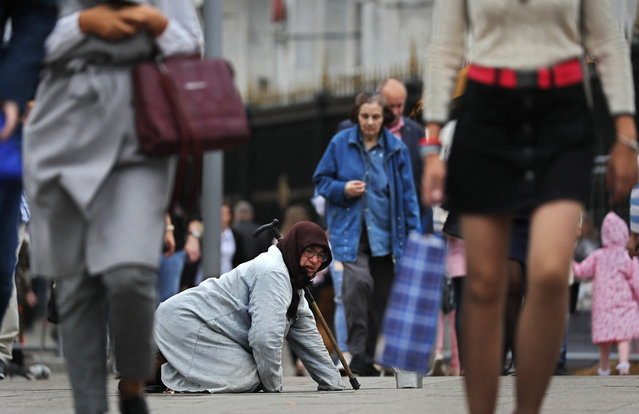 An elderly woman begs on the street downtown Moscow, Russia, 12 September 2018. Russian President Vladimir Putin supported the government's proposal to increase the retirement age for men to 65 from the current 60 and for women to 60 from the current 55. (Photo by Yuri Kochetkov/EPA/EFE) 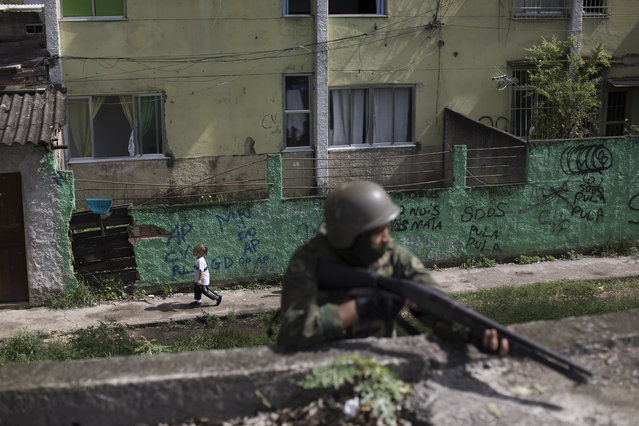 In this February 7, 2018 file photo, a girl runs past soldier with his weapon drawn, during a surprise operation in the City of God slum of Rio de Janeiro, Brazil. Brazil's Public Security Minister Raul Jungmann said said in an interview with the Folha de S. Paulo newspaper on Saturday, August 18, that the military will no longer be in charge of security forces in Rio de Janeiro state as of December. (Photo by Leo Correa/AP Photo) 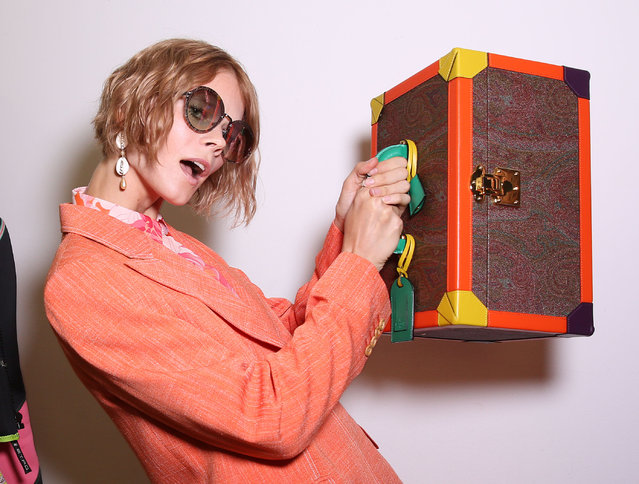 A model in playful mood backstage before the Etro show during Milan Fashion Week in Milan, Italy on September 21, 2018. (Photo by WWD/Rex Features/Shutterstock) 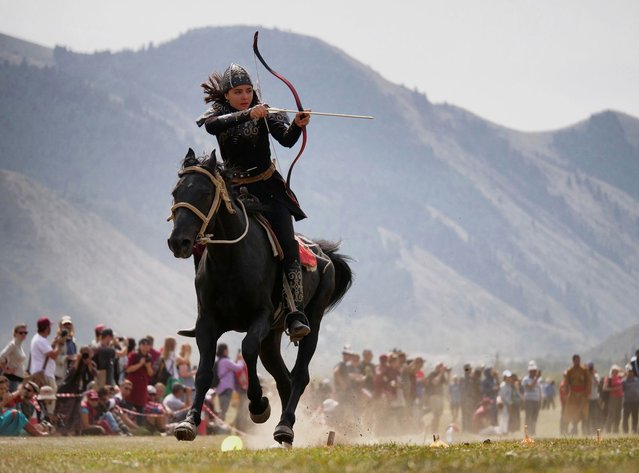 Turkey's Janset Genel in full flight during the mounted archery event, which the 18-year-old would go on to win, at the third World Nomad Games in Cholpon-Ata, Kyrgyzstan on September 9, 2018. (Photo by Amos Chapple/Radio Free Europe/Radio Liberty) 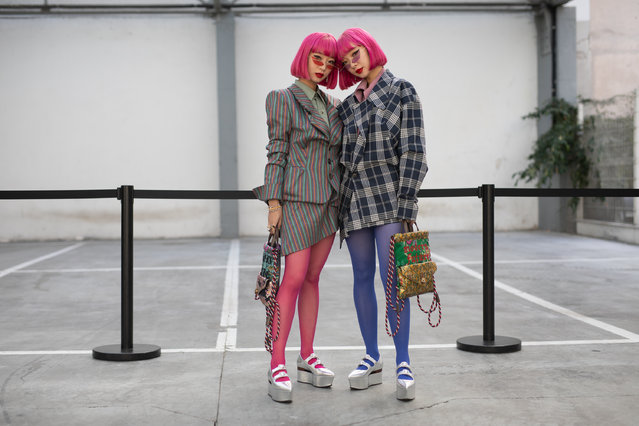 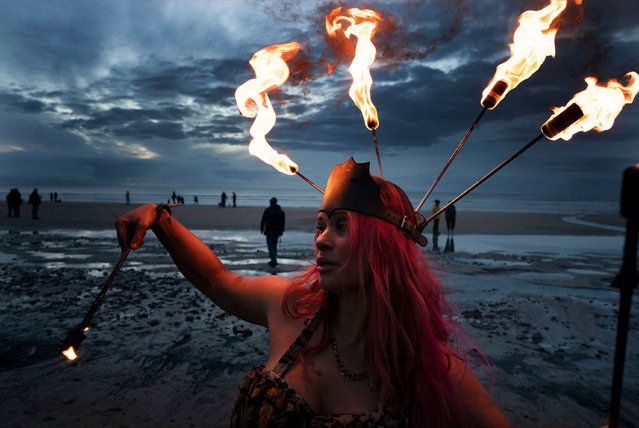 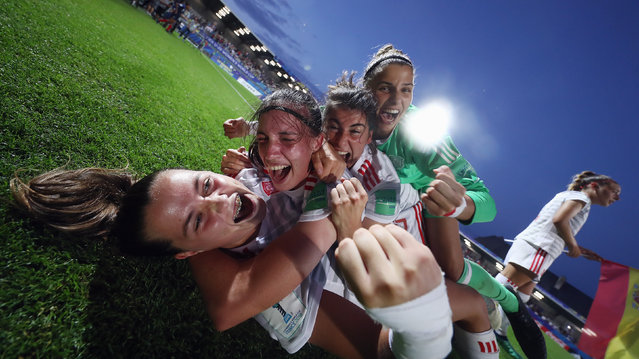 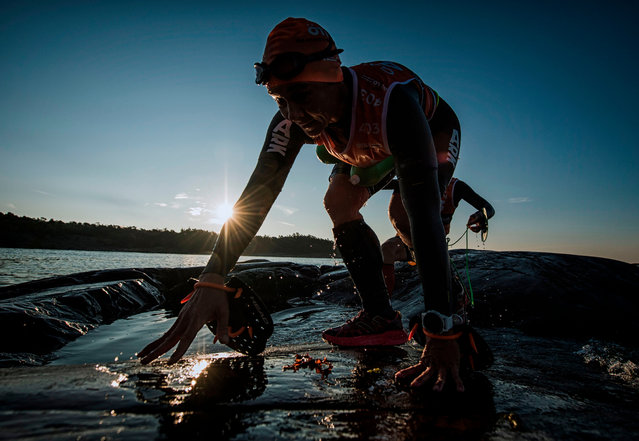 People compete during the OTILLO Swimrun race from Sandhamn, a small settlement in the central- peripheral part of the Stockholm Archipelago to Uto, a small island in the East of Stockholm archipelago, on September 3, 2018. The Swimrun competition that was born from a drunken bet is a team- sport based on two persons. The team members are linked with a 10 m leash and have to compete running and swimming together. (Photo by Jonathan Nackstrand/AFP Photo) 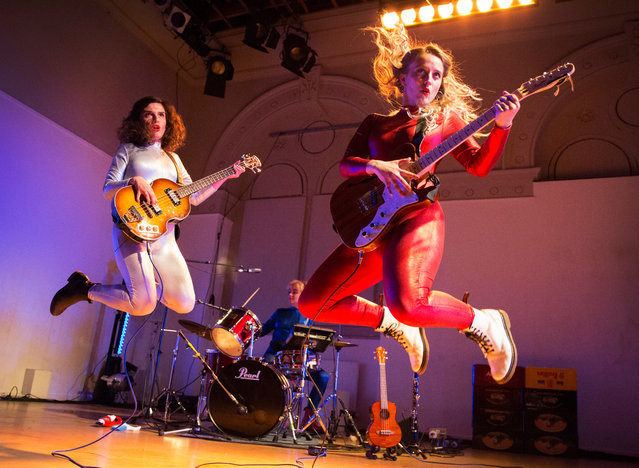 “Nele Needs a Holiday: The Musical” band perform during the Big in Belgium showcase at the Edinburgh fringe festival in Edinburgh, Scotland on August 12, 2018. (Photo by Murdo Macleod/The Guardian) 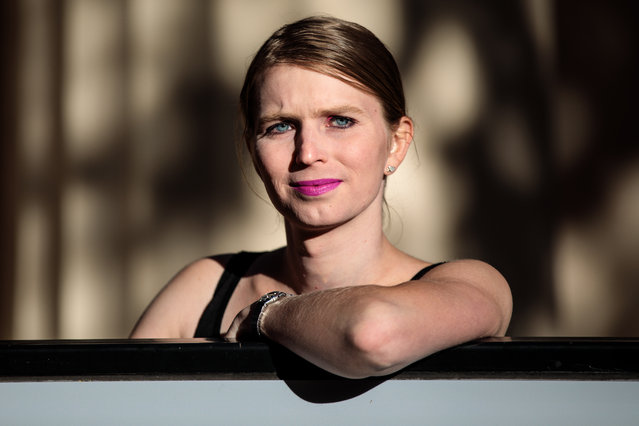 Former American soldier and whistleblower Chelsea Manning poses during a photo call outside the Institute Of Contemporary Arts (ICA) ahead of a Q&A event on October 1, 2018 in London, England. In 2010 Manning was convicted of leaking secret US documents and served seven years in military prison before being released. (Photo by Jack Taylor/Getty Images) 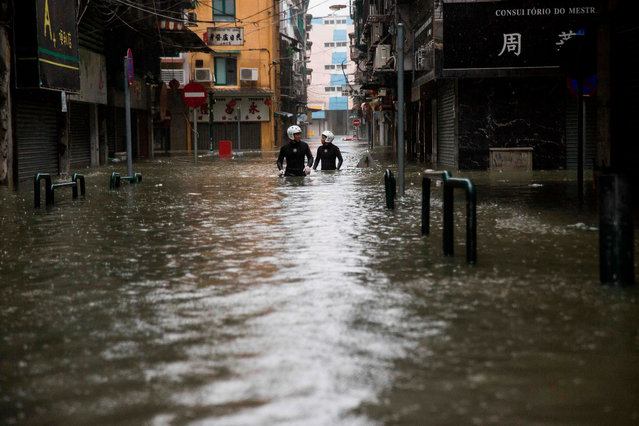 Rescue workers make their way through floodwaters during a rescue operation during Super Typhoon Mangkhut in Macau on September 16, 2018. (Photo by Isaac Lawrence/AFP Photo) 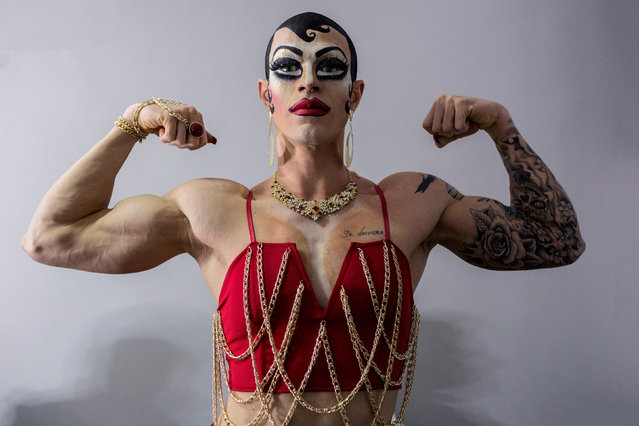 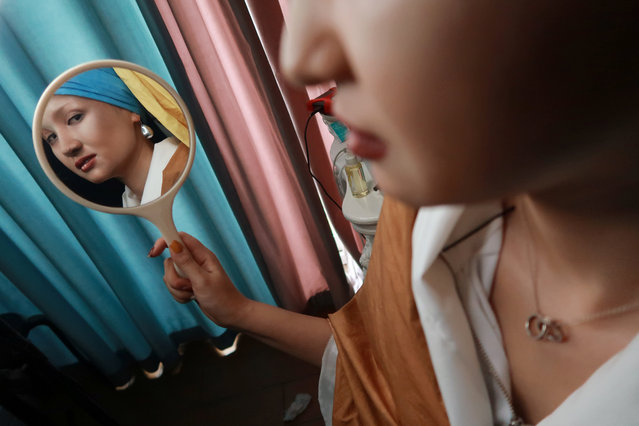 Makeup artist He Yuhong, also known as “Yuya”, checks herself in the mirror during a photo shoot following her transformation into the “Girl with a Pearl Earring”, the 17th century oil painting by Dutch painter Johannes Vermeer, at her house in Chongqing, China on August 14, 2018. (Photo by Thomas Suen/Reuters) 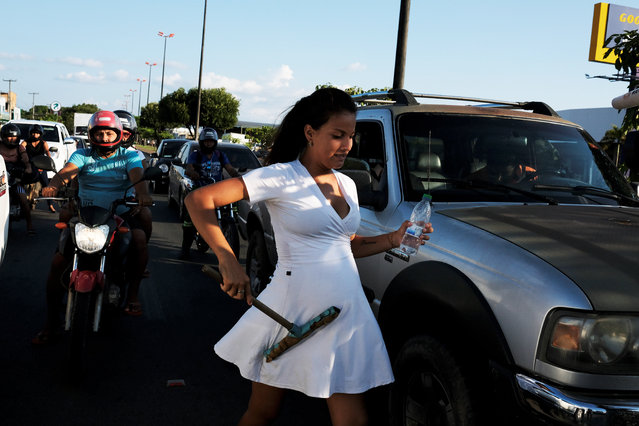 Anyi Gomez, 19, a pregnant Venezuelan woman from Monagas state, is pictured between cars as she washes car windows at a traffic light in Boa Vista, Roraima state, Brazil on August 24, 2018. (Photo by Nacho Doce/Reuters) 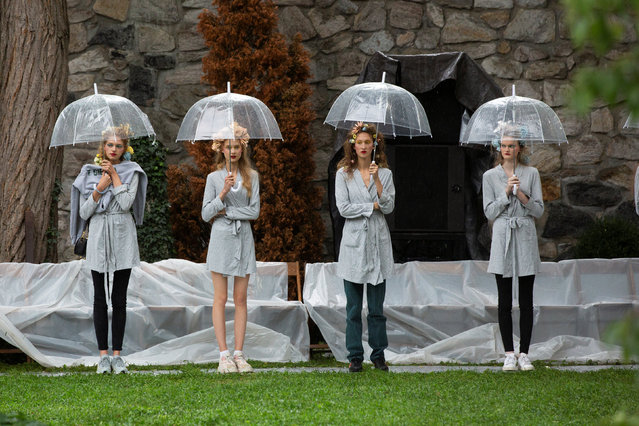 Models listen to instructions during a final run through before presenting creations from the Rodarte Spring/Summer 2019 collection at New York Fashion Week in the Manhattan borough of New York City, U.S., September 9, 2018. (Photo by Caitlin Ochs/Reuters) 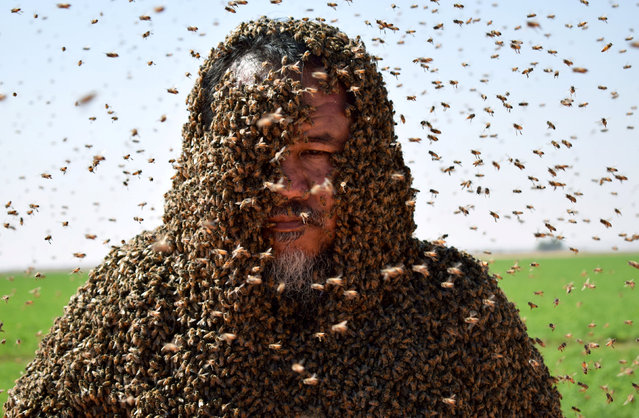 A Saudi man with his body covered with bees poses for a picture in Tabuk, Saudi Arabia September 11, 2018. (Photo by Mohamed Al Hwaity/Reuters) 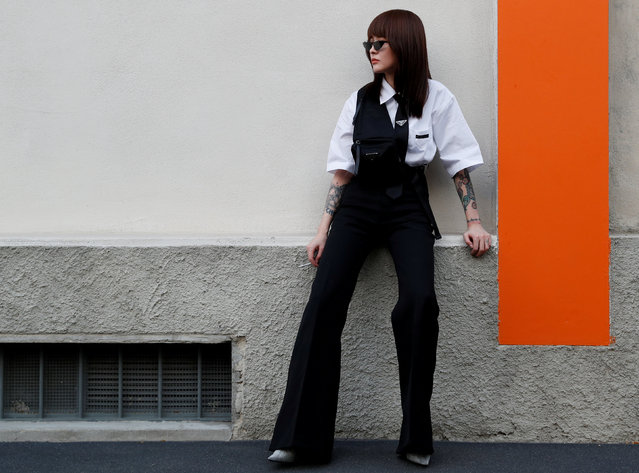 A guest is seen outside the Prada show during Milan Fashion Week Spring 2019 in Milan, Italy, September 20, 2018. (Photo by Stefano Rellandini/Reuters) 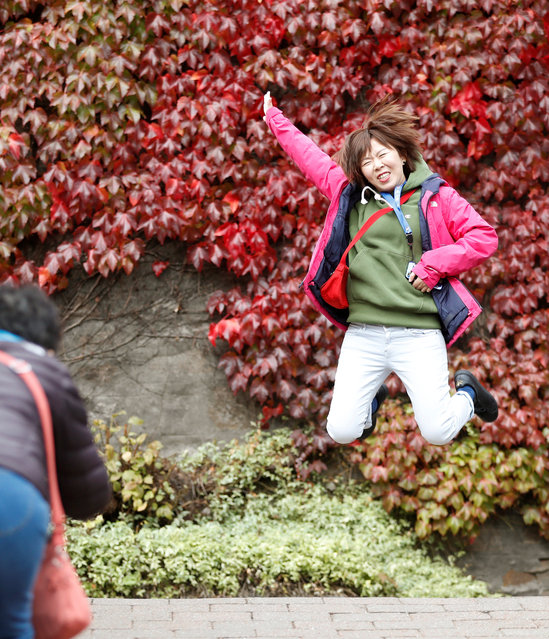 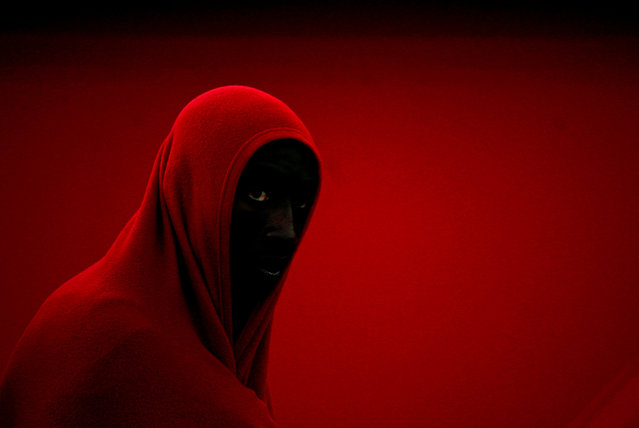 A migrant, part of a group intercepted off the coast in the Mediterranean Sea, stands in a queue after arriving on a rescue boat at the port of Motril, southern Spain October 2, 2018. (Photo by Juan Medina/Reuters) 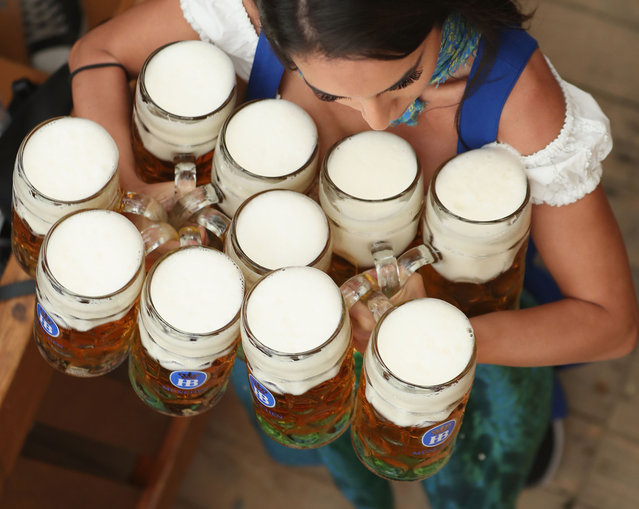