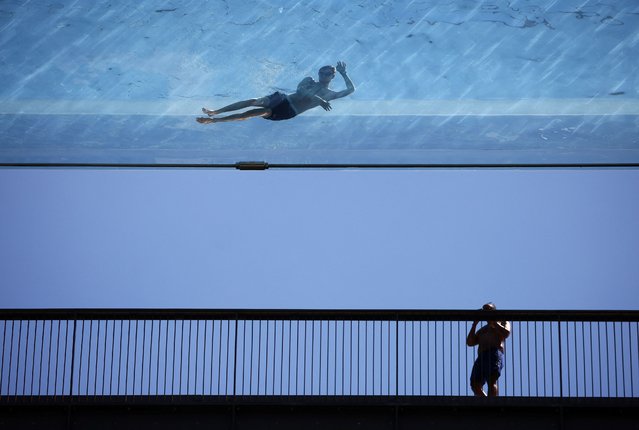 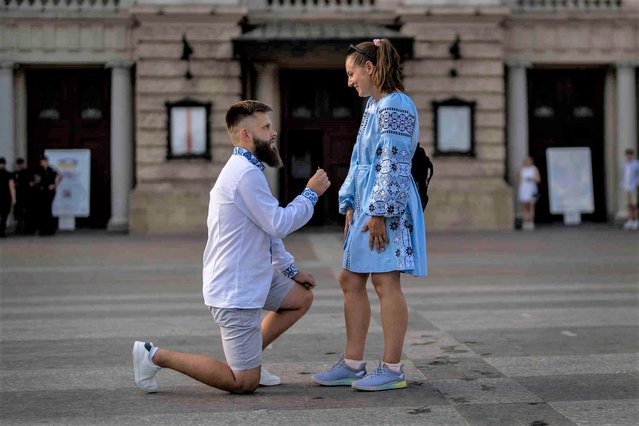 Oleksandr offers an engagement ring to his girlfriend Kateryna in downtown Lviv, Ukraine, Saturday, August 27, 2022. Kateryna, who just returned from Poland on Saturday, was met at the Lviv train station by her fiancé Oleksandr, ending six months of separation because of the war. (Photo by Evgeniy Maloletka/AP Photo) 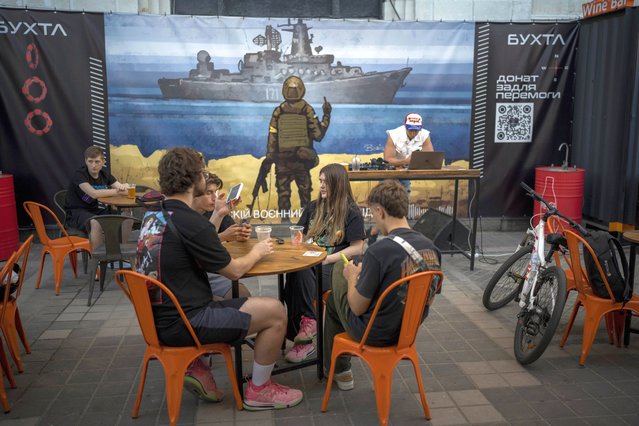 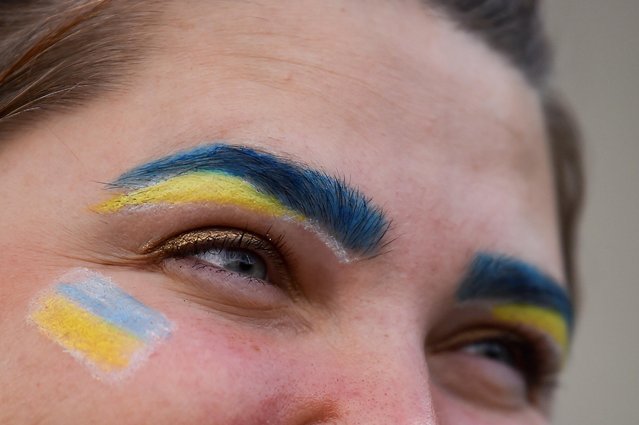 A woman demonstrates against Russia's invasion of Ukraine, during a Ukrainian Independence Day rally, in Dublin, Ireland on August 24, 2022. (Photo by Clodagh Kilcoyne /Reuters) 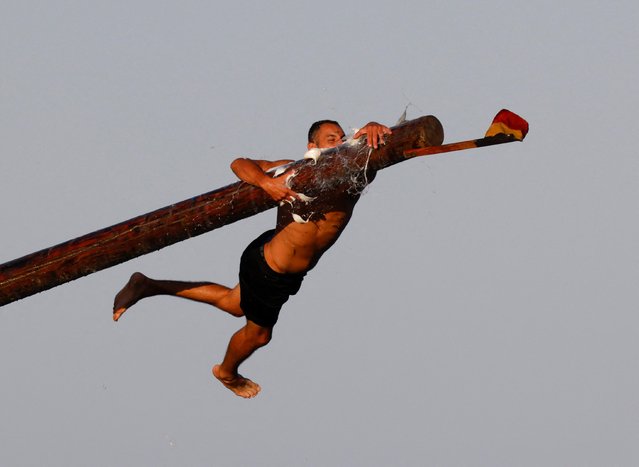 A competitor tries to grab a flag as he falls off the "gostra", a pole covered in lard, during the week-long celebrations of the religious feast of St. Julian, patron of the town of St. Julian's, Malta on August 20, 2022. (Photo by Darrin Zammit Lupi/Reuters) 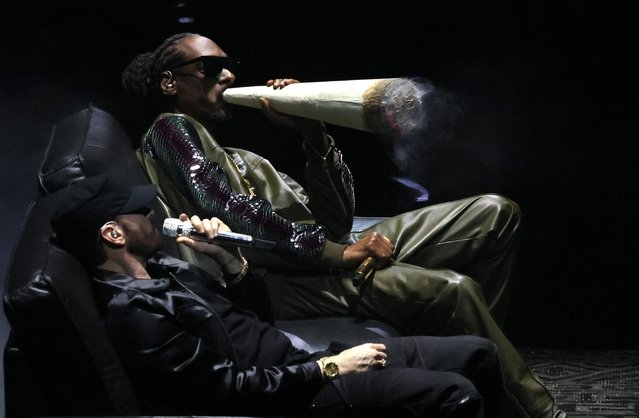 American rappers Eminem, foreground, and Snoop Dogg perform “From the D 2 the LBC” at the MTV Video Music Awards at the Prudential Center on Sunday, Aug. 28, 2022, in Newark, N.J. (Photo by Brendan McDermid/Reuters) 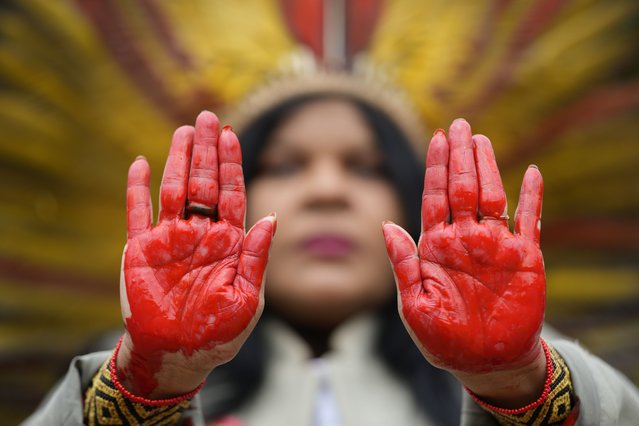 Indigenous leader Sonia Guajajara from the Guajajara ethnic group shows her hands painted in red symbolizing blood, during a protest against Violence, illegal logging, mining and ranching, and to demand government protection for their reserves, one day before the celebration of “Amazon Day”, in Sao Paulo, Brazil, Sunday, September 4, 2022. (Photo by Andre Penner/AP Photo) Revellers dance as the opening of the Notting Hill carnival begins with 'J'Ouvert' on August 28, 2022 in London, England. The Notting Hill Carnival has returned after a two year break due to the Coronavirus pandemic. (Photo by Dan Kitwood/Getty Images) 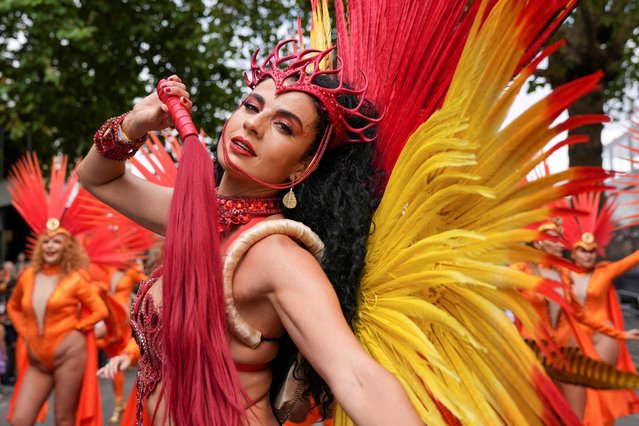 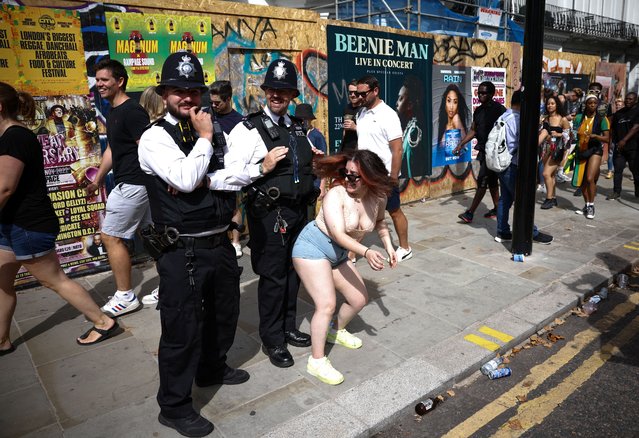 A reveller dances next to a police officer at Notting Hill Carnival in London, Britain on August 28, 2022. (Photo by Henry Nicholls/Reuters) 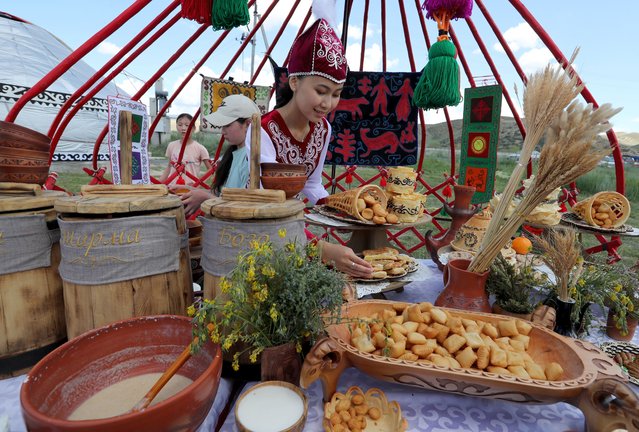 A Kyrgyz girl in traditional attire prepares drinks and food for sale to visitors of the Kyrgyz Culture Festival in Naryn, some 310 kilometers from the country's capital Bishkek, Kyrgyzstan, 26 June 2022. The Kyrgyz city of Naryn hosted the festival during which they opened an ethno-complex with samples of traditional crafts and goods for foreign tourists. (Photo by Igor Kovalenko/EPA/EFE) 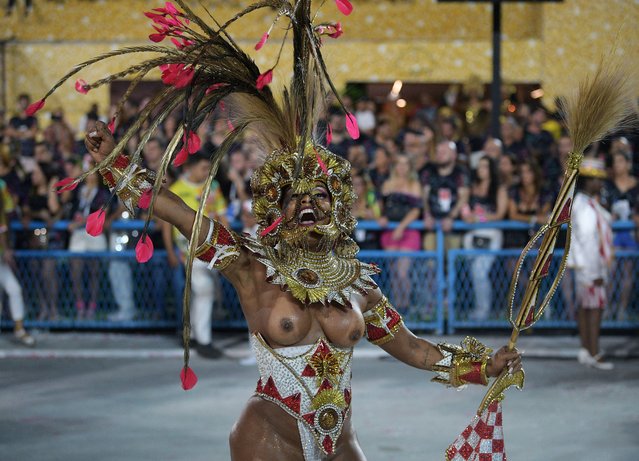 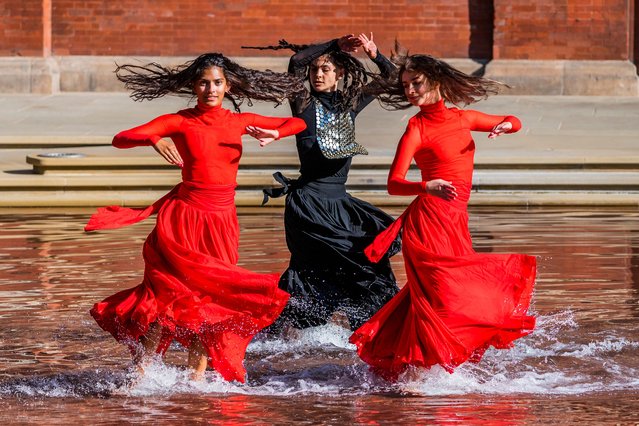 Dancers from the Akram Khan Dance Company perform the opening piece of “What is Seen and What 's Not”, a three-part installation by British artist Osman Yousefzada, during a photocall at the Victoria and Albert Museum (V&A) in London, Britain, 29 July 2022. Marking the 75th anniversary of Pakistan's independence, Yousefzada's work explores displacement, migration, and climate change, and is on display at the museum from 29 July and 25 September 2022. (Photo by Tolga Akmen/EPA/EFE/Rex Features/Shutterstock) 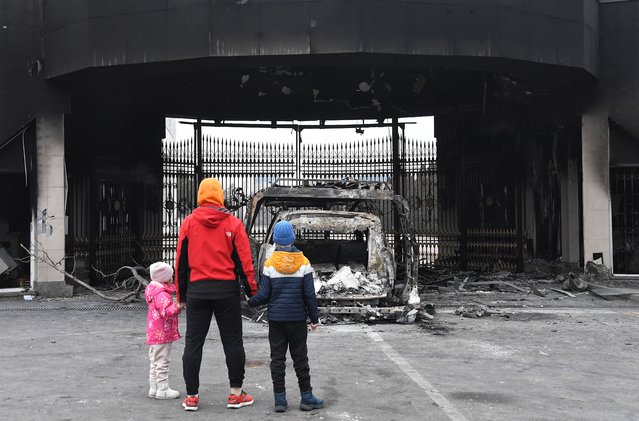 Passersby survey the damage left behind after protests against rising fuel prices in Almaty, Kazakhstan on January 11, 2022. (Photo by Kommersant Photo Agency/Rex Features/Shutterstock) Jessica Smith, a former Australian Paralympic Swimmer, tests her new bionic hand that improves the speed of movement and sensitivity of touch, according to the company, in London, Britain on August 12, 2022. (Photo by Maja Smiejkowska/Reuters) 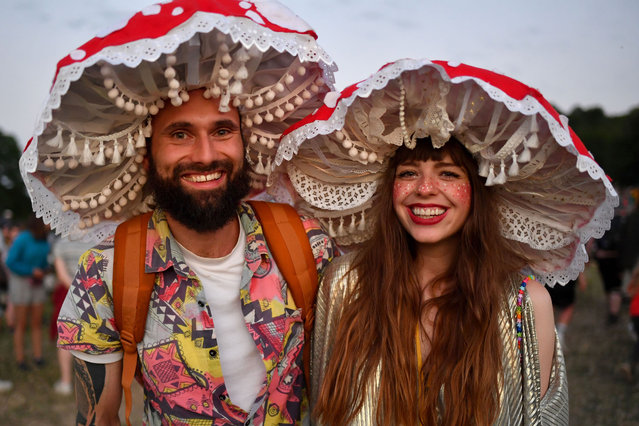 A couplein fancy dress pose for a photograph during day one of Glastonbury Festival at Worthy Farm, Pilton on June 22, 2022 in Glastonbury, England. (Photo by Dave J. Hogan/Getty Images) 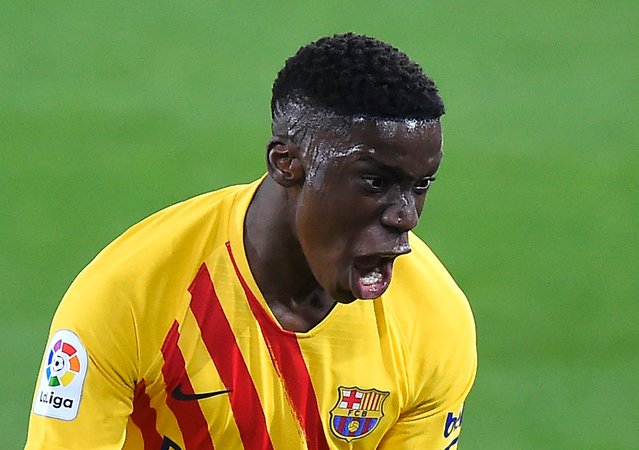 Europe's largest street festival has returned on August 29, 2022 to the streets of Notting Hill in London after the years cancelled due to the Covid pandemic. Jamaican themed exotic dancers and musical groups will parade through the streets, with food and street entertainment around the area adding to the event. The Grand Parade takes place on Bank Holiday Monday as the culmination of the three-day festival which began in 1966. Participants are gathering nearby in their colourful costumes. (Photo by Avpics/Alamy Live News)
Edit Del
11 Sep 2022 04:45:00, post received 0 comments
Publication archive:
←   →
Popular tags:
All tags
Last searches: