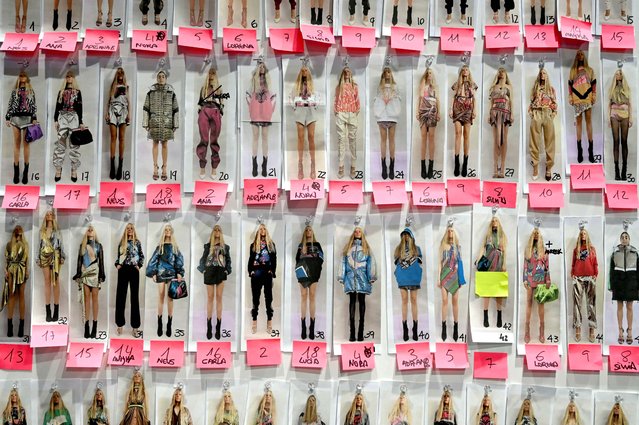 Pictures of models are displayed on a board on backstage prior to the presentation of Spanish designer Andres Sarda's Autumn – Winter 2021 / 2022 collection during the Mercedes Benz Fashion Week in Madrid on April 8, 2021. (Photo by Gabriel Bouys/AFP Photo) 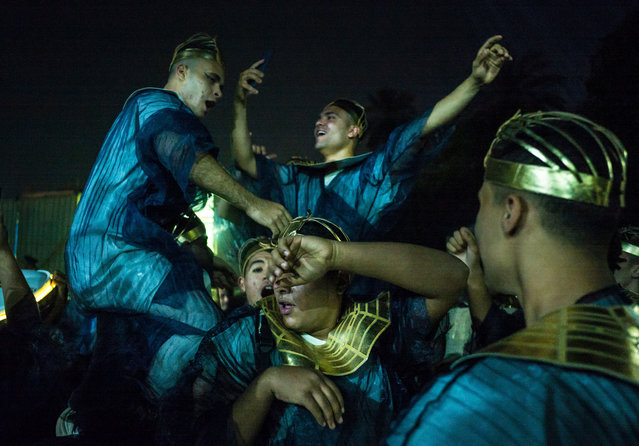 Members of the “Pharaohs' Golden Parade” show celebrate just after the finishing of the show on April 3, 2021 in Cairo, Egypt. (Photo by Vassilis A. Poularikas/NurPhoto/Rex Features/Shutterstock) 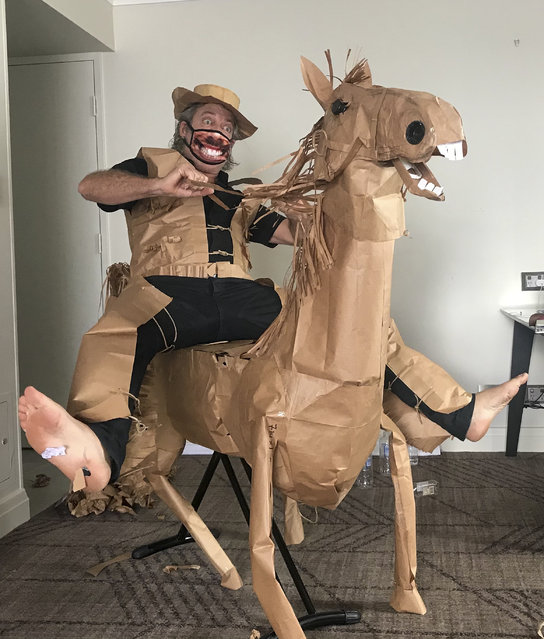 David Marriott poses with his paper horse in his hotel room in Brisbane, Australia, April 1, 2021. While in quarantine inside his Brisbane hotel room, art director Russell Brown was bored and started making a cowboy outfit from the paper bags his meals were being delivered in. His project expanded to include a horse and a clingfilm villain that he has daily adventures with, in images that have gained a huge online following. (Photo by David Marriott via AP Photo) 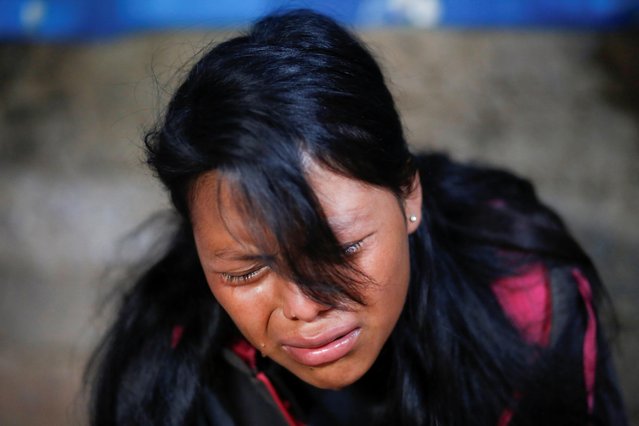 Leydi Tomas, sister of Marvin Alberto Tomas, one of the migrants killed in the Mexican state of Tamaulipas while trying to reach the U.S., cries during the funeral service in Comitancillo, Guatemala, March 13, 2021. (Photo by Luis Echeverria/Reuters) 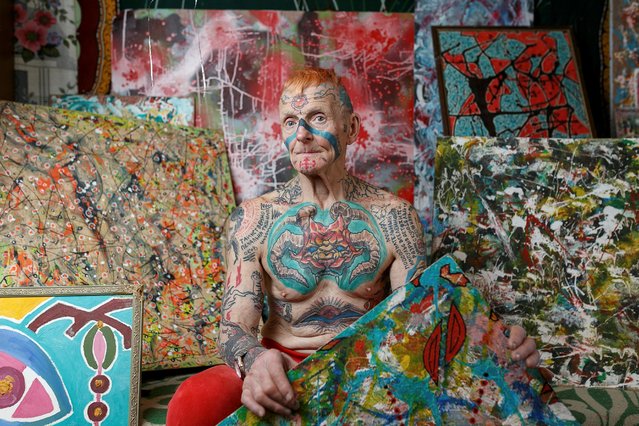 Pensioner Vladimir Sedakov, nicknamed Spartak, poses for a picture at home in Yekaterinburg, Russia March 28, 2021. The active lifestyle of 74-year-old Vladimir Sedakov, who is on his way to cover himself in tattoos top to toe, is quite different from that of a typical pensioner – he creates poetry and paintings, wears incredibly crafted costumes and owns a pet goat called Marusya. (Photo by Alexei Kolchin/Reuters) 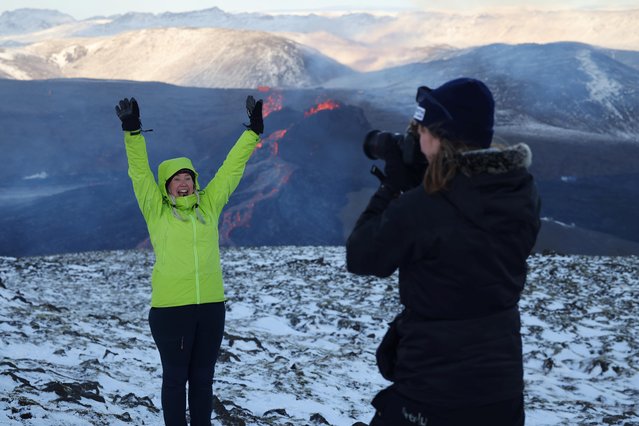 Tourists take pictures at a volcanic site on the Reykjanes Peninsula following recent eruptions, in Iceland on March 26, 2021. (Photo by Cat Gundry-Beck/Reuters) 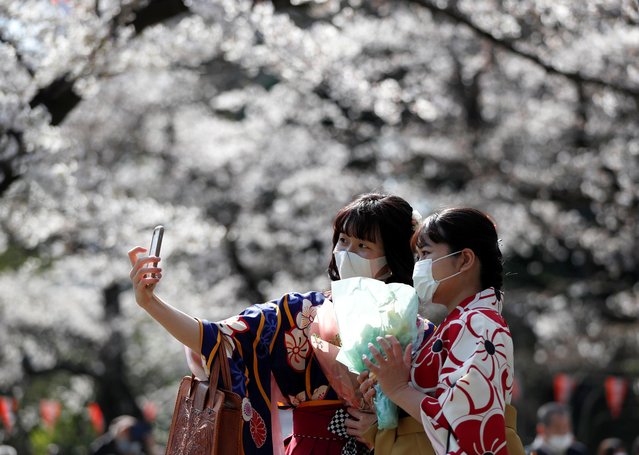 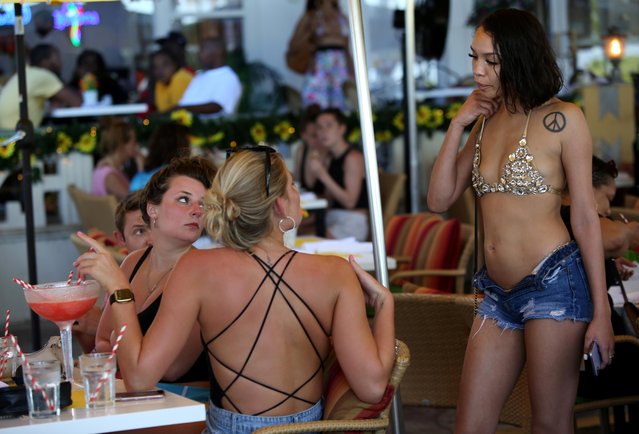 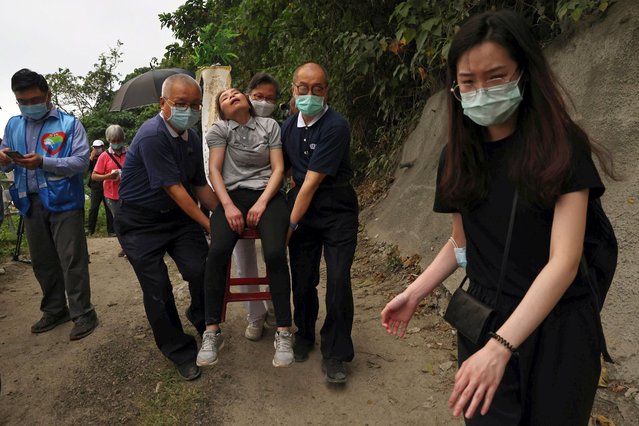 Members of the Tzu Chi Foundation help a grieving woman as relatives of the victims mourn near the site a day after the deadly train derailment at a tunnel north of Hualien, Taiwan on April 3, 2021. (Photo by Ann Wang /Reuters) 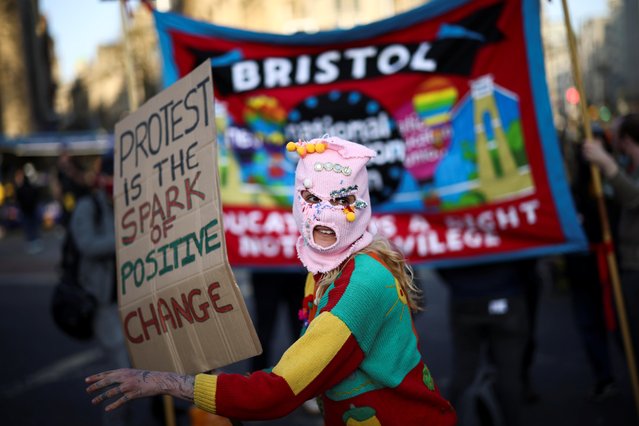 A masked demonstrator holds a placard during a “Kill the Bill” protest in Bristol, Britain, April 3, 2021. (Photo by Henry Nicholls/Reuters) 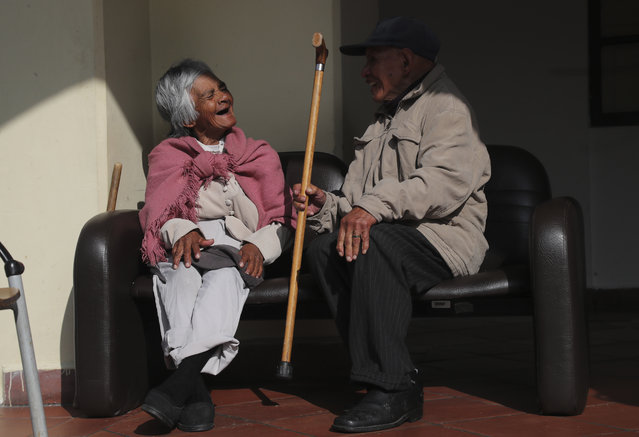 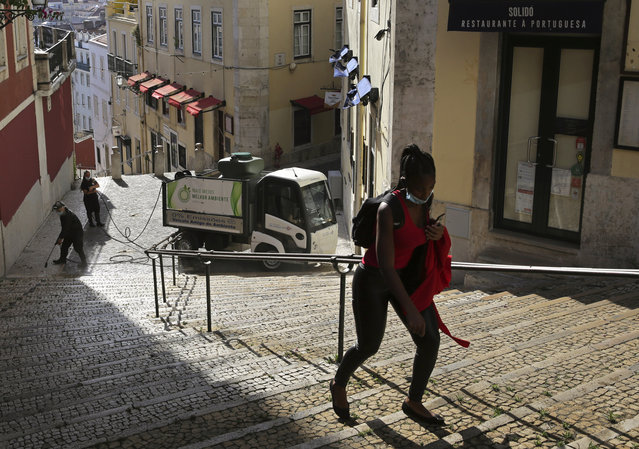 In this Wednesday, June 24, 2020 file photo, a woman wearing a face mask walks past workers washing the street in Lisbon's old center. A senior European human rights official is sounding the alarm about a rise in racism and discrimination in Portugal. The Council of Europe’s Commissioner for Human Rights, Dunja Mijatović, published a report Wednesday, March 24, 2021 into “the increasing level of racism and the persistence of related discrimination” in the southern European country. (Photo by Armando Franca/AP Photo/File) 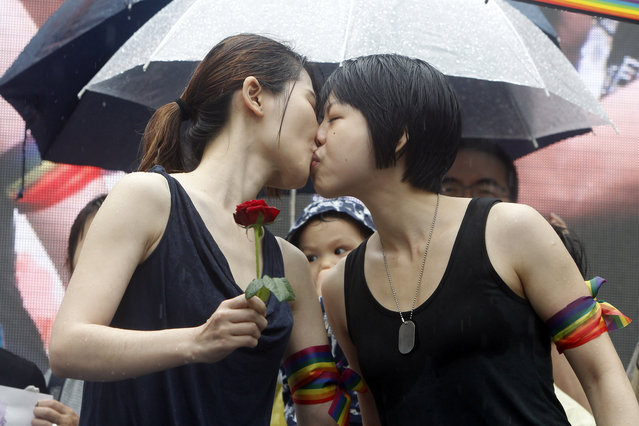 Same-sеx marriage supporters kiss outside the Legislative Yuan Friday, May 17, 2019, in Taipei, Taiwan after the legislature passed a law allowing same-sеx marriage in a first for Asia. (Photo by Chiang Ying-ying/AP Photo) 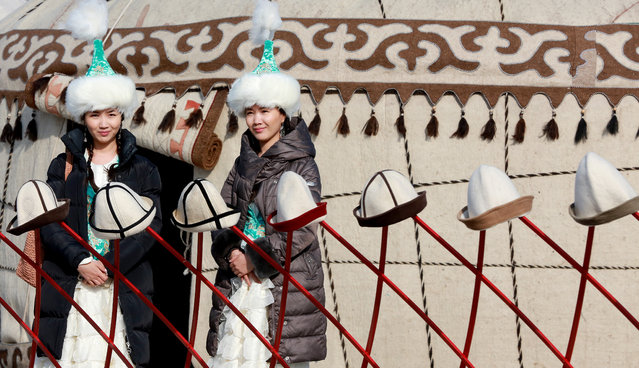 Kyrgyz girls in national costumes take part in the celebration of the White Kalpak Day in the center of Bishkek, Kyrgyzstan on 04 March 2021. Ak Kalpak Day is celebrated in Kyrgyzstan in honor of the national headdress of the Kyrgyz in order to support national traditions and culture. The holiday was officially established on 29 June 2016, but has been celebrated for 10 years. (Photo by Igor Kovalenko/EPA/EFE) 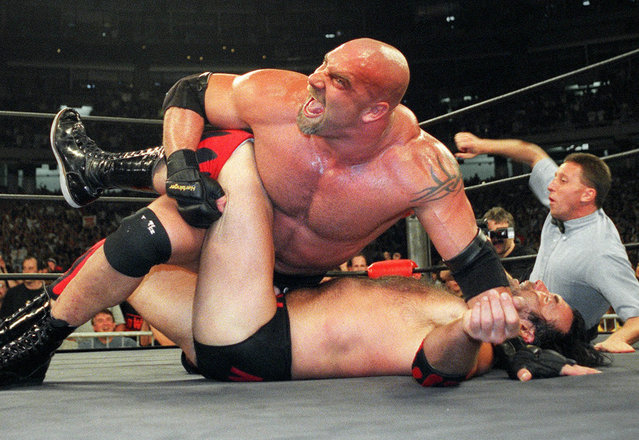 In this July 6, 1998, file photo, World Championship Wrestling heavyweight champion Bill Goldberg puts Scott Hall to the mat during a match in Atlanta. Bill Goldberg punched through the drywall in his garage one day this week – not as some sort of masochistic training for his next WWE match – but for repairs on property damage suffered as a result of the deadly Texas storms. The WWE Hall of Famer spent about 12 hours Wednesday, Feb. 24, 2021 replacing pumps in the wells on the ranch he owns just outside San Antonio, and then it was off to work on a garage and pool house that had been flooded. (Photo by Erik S. Lesser/AP Photo/File)
Edit Del
12 Apr 2021 00:07:00, post received 0 comments
Publication archive:
←   →
Popular tags:
All tags
Last searches: