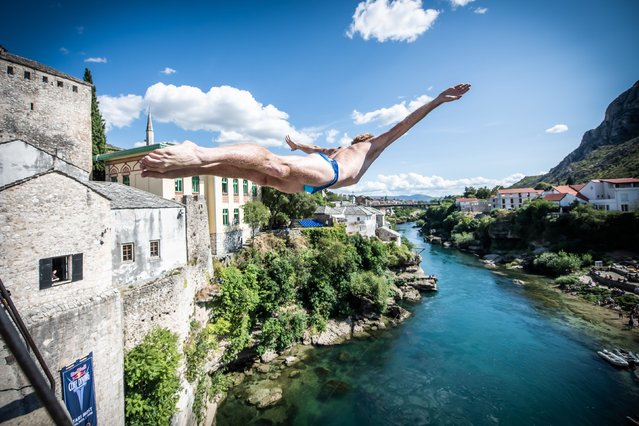 In this handout image provided by Red Bull, Andy Jones of the USA dives from the 21 metre Stari Most (Old Bridge) during the first competition day of the third stop of the Red Bull Cliff Diving World Series on August 26, 2021 at Mostar, Bosnia and Herzegovina. (Photo by Romina Amato/Red Bull via Getty Images) 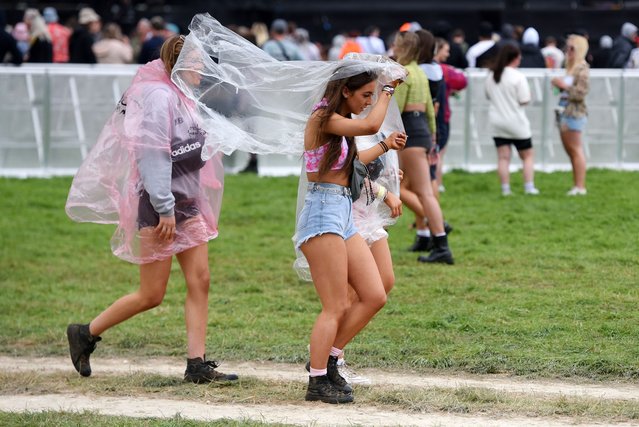 Festival goers put on ponchos as the rain falls on Day 1 of Leeds Festival 2021 at Bramham Park on August 27, 2021 in Leeds, England. (Photo by Matthew Baker/Getty Images) 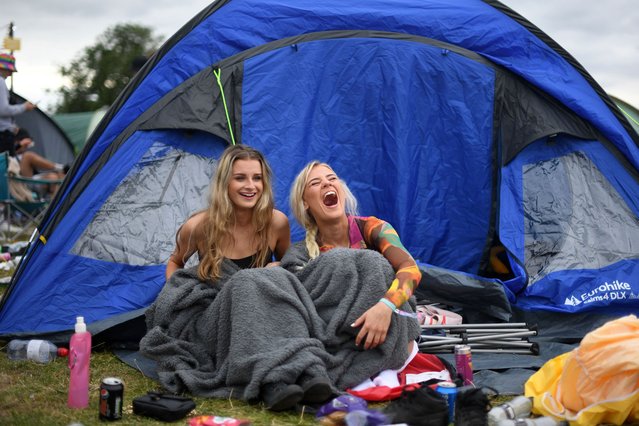 Festival-goers set up their tent as they attend Reading Festival in Reading, west of London, on August 27, 2021. As coronavirus covid-19 infection levels rise across the country, vaccines will be offered to revellers throughout the weekend. The organiser of Reading and Leeds Festivals has said such events are arguably “safer places to be” because attendees have been tested for covid-19. The festivals are returning this year with headliners including Stormzy, after being cancelled last year due to the pandemic. (Photo by Daniel Leal-Olivas/AFP Photo) 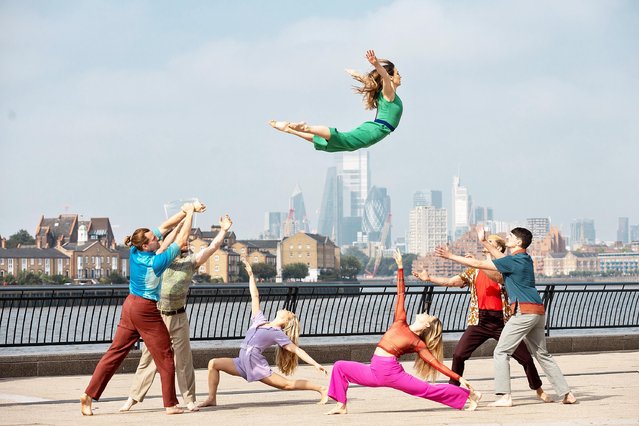 Dancers from the Motionhouse company surprised London, United Kingdom passersby on September 5, 2021 with a preview of “Nobody”, which has its premiere at Sadler’s Wells on September 22. (Photo by Vicki Couchman/The Times) 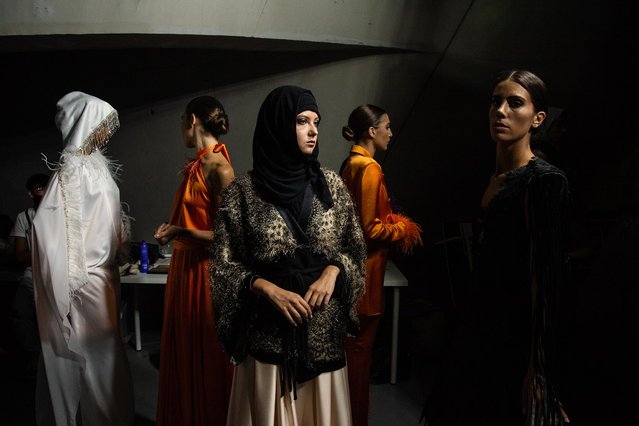 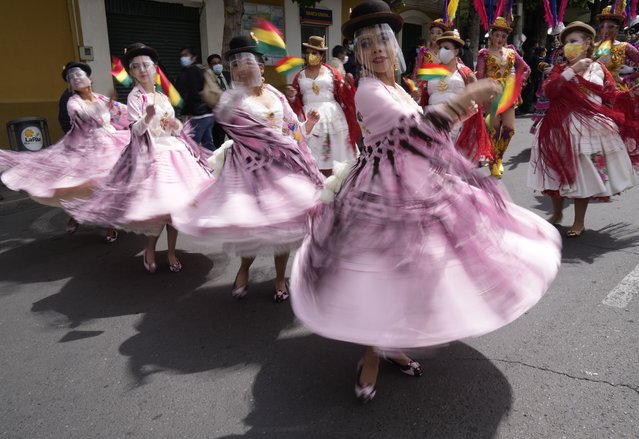 Dancers perform to celebrate the National Day of the Morenada Dance in La Paz, Bolivia, Tuesday, September 7, 2021. La Morenada is a folk dance from the Andes that was inspired by slaves brought to the region during the colonial era. (Photo by Juan Karita/AP Photo) 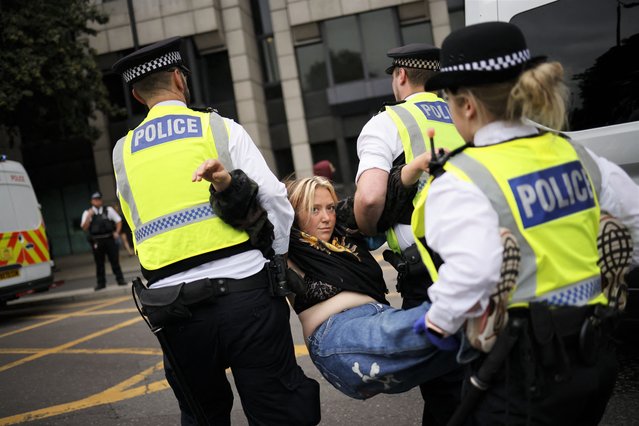 Police officers escort away a climate activists from the Extinction Rebellion group blocking the road leading to Tower Bridge in central London on August 30, 2021 during the group's “Impossible Rebellion” series of actions. Climate change demonstrators from environmental activist group Extinction Rebellion continued with their latest round of protests in central London, promising two weeks of disruption. (Photo by Tolga Akmen/AFP Photo) 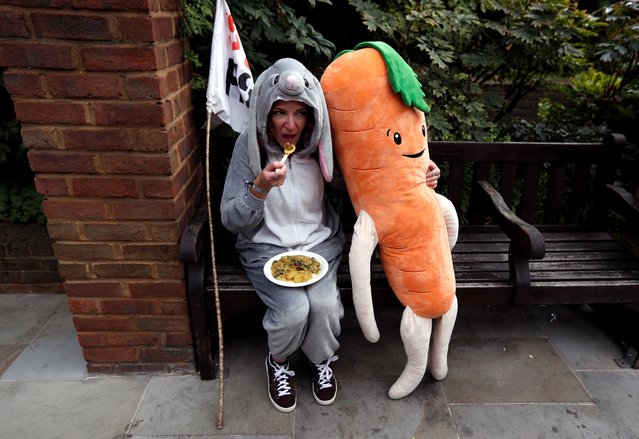 An Extinction Rebellion climate activist eats while sitting on a bench dressed as a bunny and holds a plush toy carrot during a protest in London, Britain on August 28, 2021. (Photo by Peter Nicholls/Reuters) 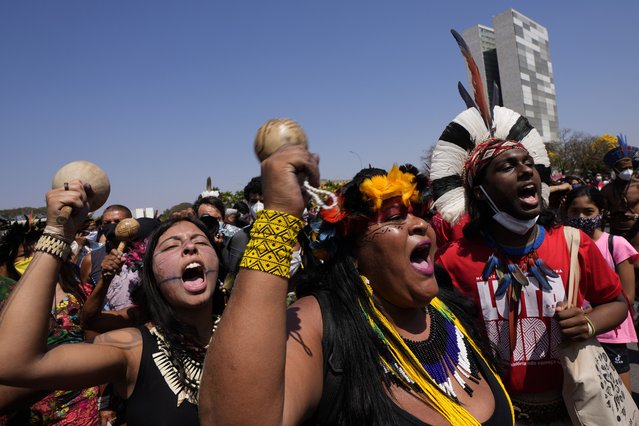 Indigenous protesters shout “Get out Bolsonaro”, referring to President Jair Bolsonaro, outside Planalto presidential palace in Brasilia, Brazil, Friday, August 27, 2021. Indigenous are demanding the Supreme Court protect their land rights and reserves, asking justices to uphold their territorial rights in a landmark case that could open their lands to outside development by commercial interests. (Photo by Eraldo Peres/AP Photo) 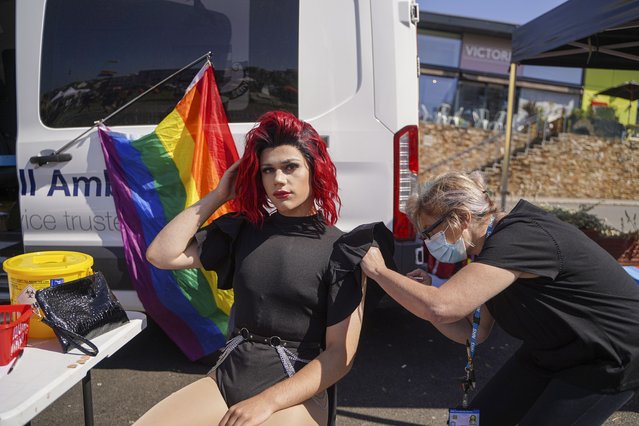 17-year old Ben Kitts (aka missamyross) receives a Covid vaccination from the NHS during the first day of the Cornwall Pride LGBTQ festival on August 27, 2021 in Newquay, England. Cornwall Pride is taking place at a time when the town of Newquay has one of the highest Covid infection rates in the UK. The event organisers worked with the local council's public health advisers prior to the event to access it's impact before permitting it to go ahead with social distancing and mask-wearing requested even though the event is being hosted in the open air Killacourt park. (Photo by Hugh Hastings/Getty Images) 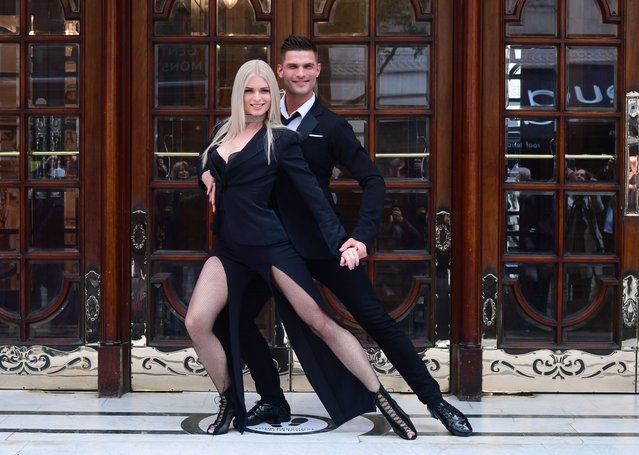 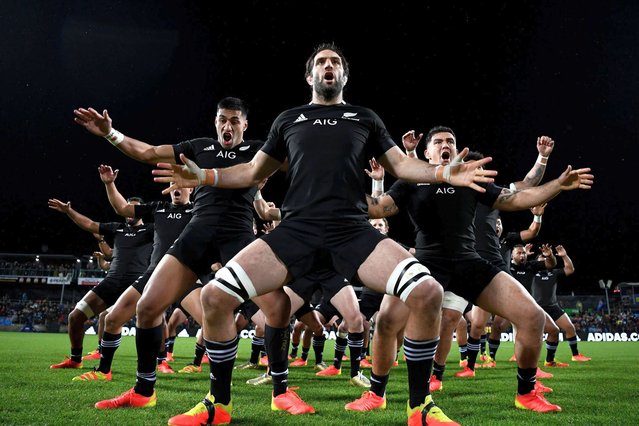 Rieko Ioane, Samuel Whitelock and Codie Taylor of the All Blacks perform the haka with the team ahead of during the International Test Match between the New Zealand All Blacks and Fiji at FMG Stadium Waikato on July 17, 2021 in Hamilton, New Zealand. (Photo by Hannah Peters/Getty Images) 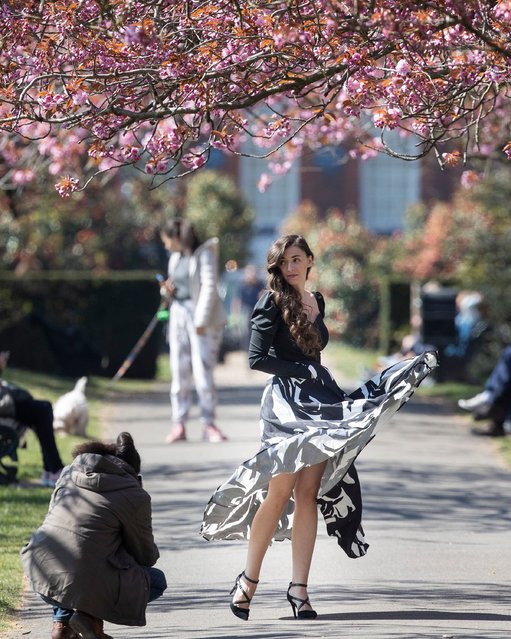 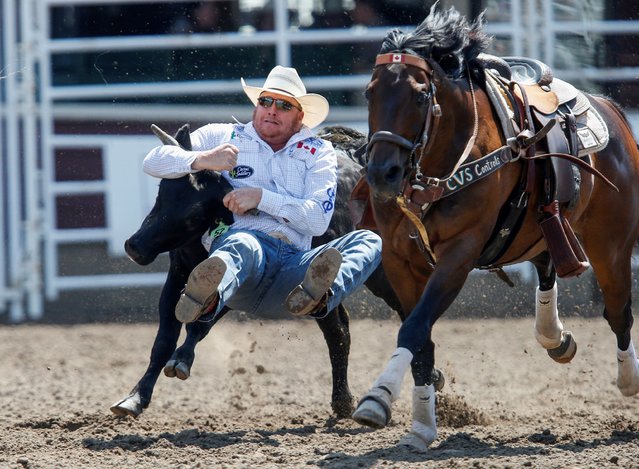 Curtis Cassidy of Donalda, Alberta, wrestles a steer in the steer wrestling event during the rodeo as the Calgary Stampede gets underway following a year off due to coronavirus disease (COVID-19) restrictions, in Calgary, Alberta, Canada on July 10, 2021. (Photo by Todd Korol/Reuters) 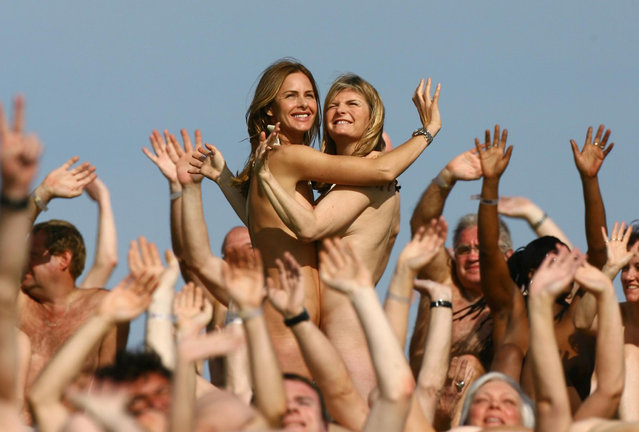