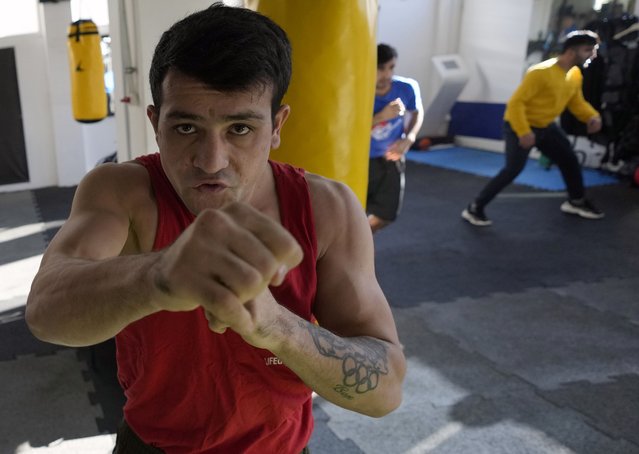 A member of the Afghan national boxing team trains during a session in local gym in Serbia, Wednesday, December 1, 2021. They practiced in secrecy and sneaked out of Afghanistan to be able to compete at an international championship. Now, the Afghan boxing team are seeking refuge in the West to be able to continue both their careers and lives without danger or fear. (Photo by Darko Vojinovic/AP Photo) 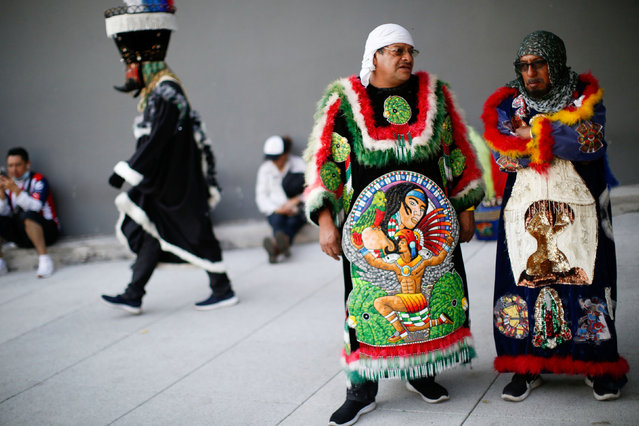 People in traditional costumes participate in a parade of Huehuenches and Chinelos, an indigenous nations dance, in Mexico City, Mexico on December 4, 2021. (Photo by Gustavo Graf/Reuters) 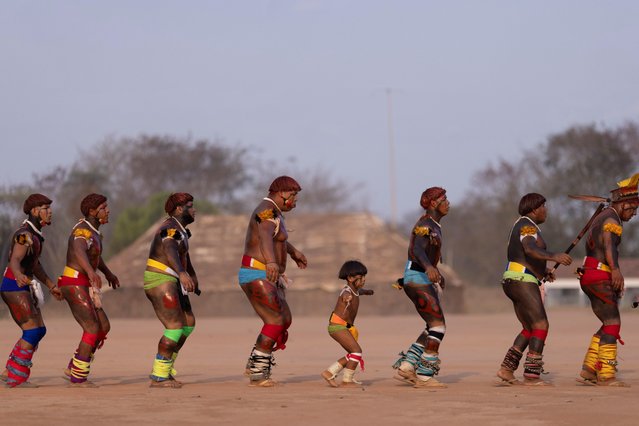 Mabitchuri, a Yawalapiti child, takes part in an “end of mourning dance” during the Kuarup funeral ritual to honor the memory of Cacique Aritana, at the Xingu Indigenous Park in Brazil, September 9, 2021. (Photo by Ueslei Marcelino/Reuters) 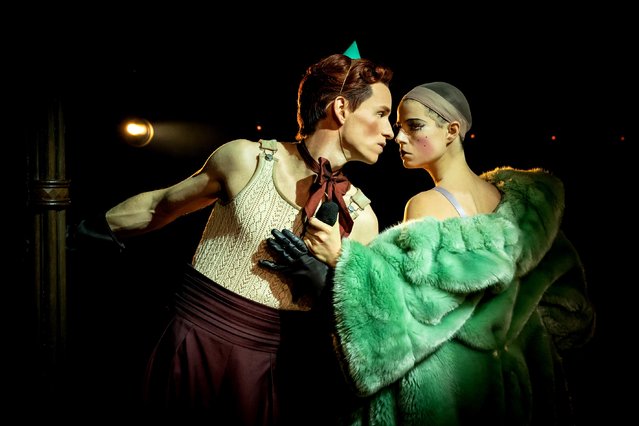 Eddie Redmayne and Jessie Buckley star in a revival of the musical Cabaret, which is performed “in the round” at the Playhouse Theatre, London in December 2021. (Photo by ATG Productions/The Times) 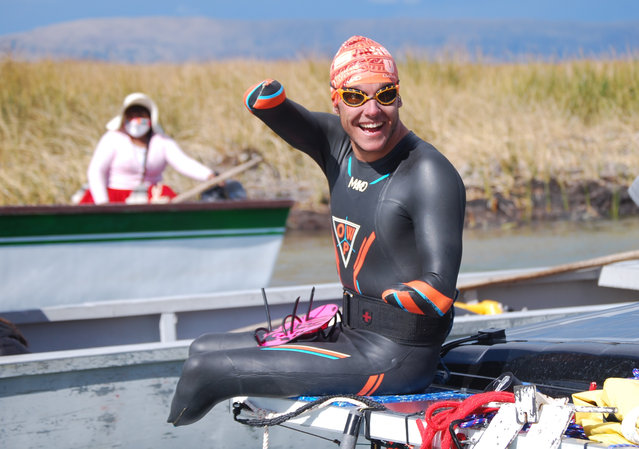 French Paralympic swimmer Theo Curin aboard the raft that he towed together with swimmers Malia Metella and Mathieu Witvoet, during the longest swim ever made on Lake Titicaca, a 120-kilometer course, between Copacabana Bolivia, and the floating islands of the Uros, Peru, 20 November 2021. Curin, whose limbs were amputated as a child due to meningitis, has made history by completing together with two other expert swimmers the longest crossing ever made. (Photo by Fernando Gimeno/EPA/EFE) 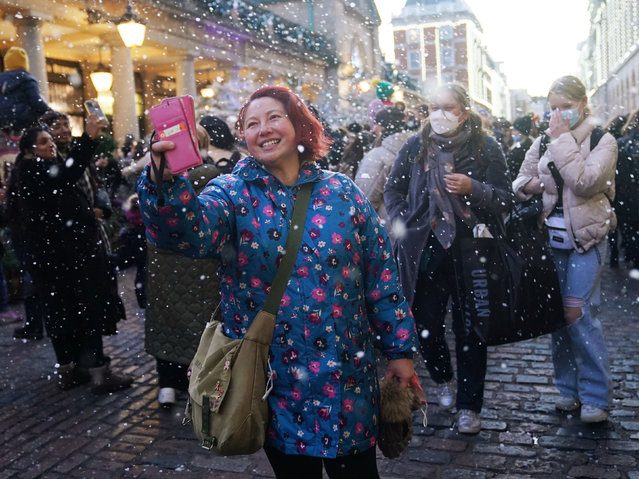 Artificial snow is sprayed in the air as people visit Covent Garden in London, United Kingdom on the first Saturday of December 2021. (Photo by Yui Mok/PA Images via Getty Images) 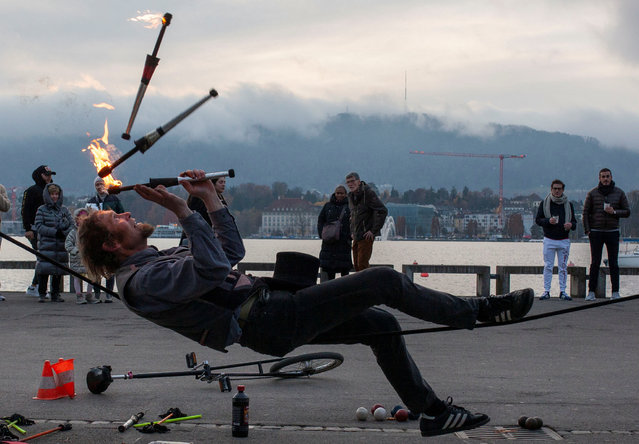 A juggler lies on a rope as he performs with torches on the banks of Lake Zurich in Zurich, Switzerland on November 21, 2021. (Photo by Arnd Wiegmann/Reuters) 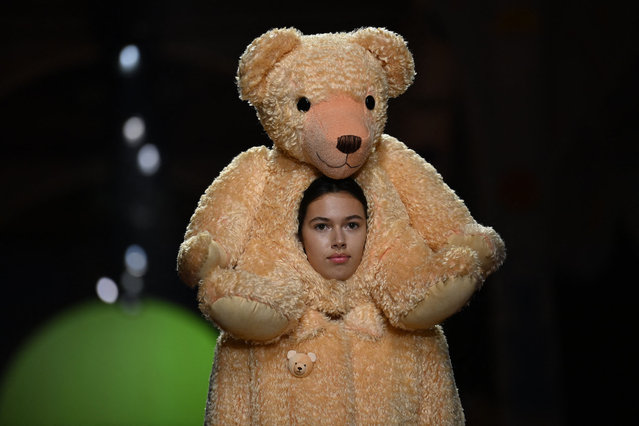 A model displays an outfit of Finland's designer Venla Elonsalo during the fashion festival in Hyeres, southern France, on October 15, 2021. (Photo by Christophe Simon/AFP Photo) 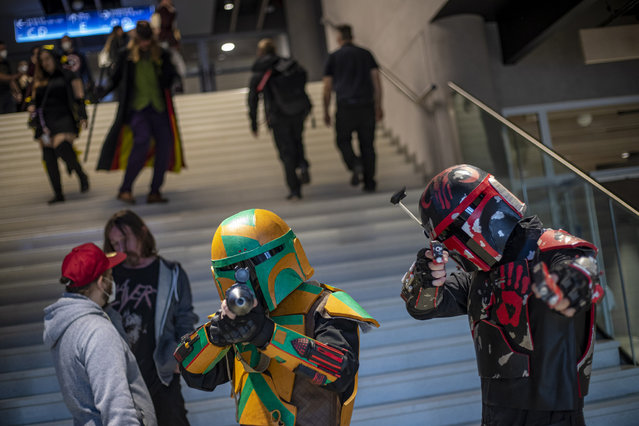 Cosplayers pose at the Comic-Con festival in Prague, Czech Republic, 15 October 2021. The three day pop-culture gathering takes place for the first time in Czech capital and is dedicated to fans of sci-fi, fantasy and horror in games, films, anime and comics, running from 15 to 17 October 2021. (Photo by Martin Divísek/EPA/EFE) 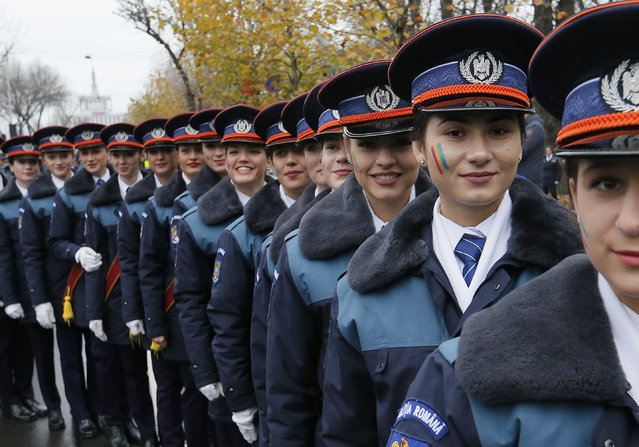 Zinnia Oberski, left, Andrada Dragoescu, centre, and Kristin Weichen Wong work at Jupiter Artland, a sculpture park near Edinburgh on November 11, 2021, on a piece being developed by the choreographer Thomas Goetz. (Photo by Ian Georgeson/The Times) 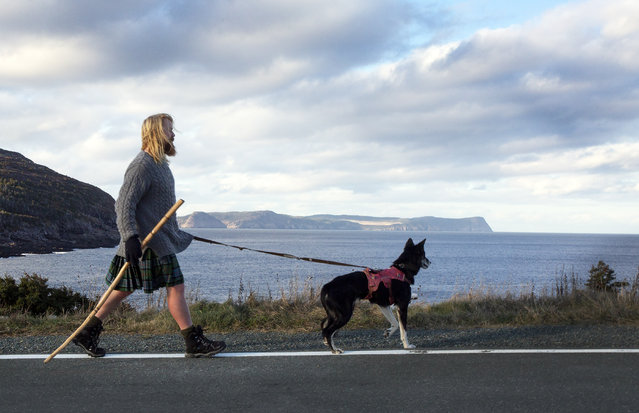 Michael Yellowlees of Scotland and his husky Luna walk the road to Cape Spear in Newfoundland and Labrador on Sunday, December 5, 2021. Yellowlees completes his cross Canada journey today at the most easterly point in North America. (Photo by Paul Daly/The Canadian Press via AP Photo) 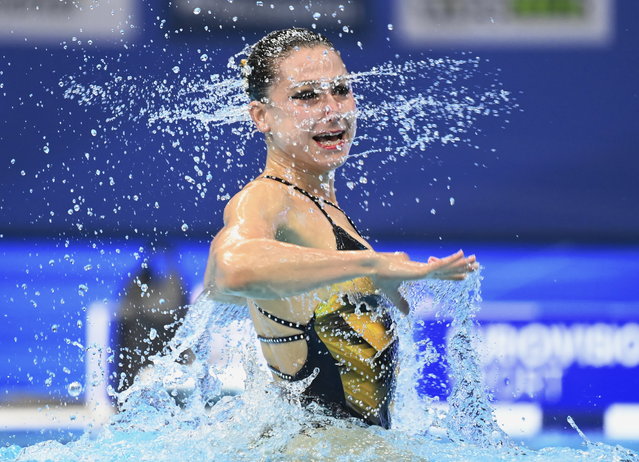 Nada Daabousova of Slovakia performs during the solo free final of artistic swimming of European Aquatics Championships in Duna Arena in Budapest, Hungary, Wednesday, May 12, 2021. (Photo by Tamas Kovacs/MTI via AP Photo) 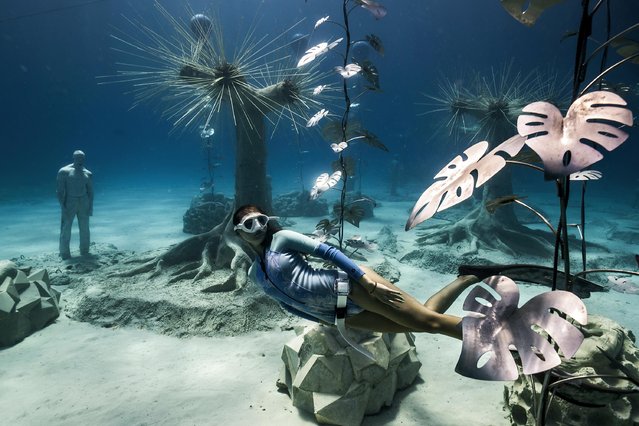 A diver swims near sculptures during the inauguration of the underwater museum in Ayia Napa, Cyprus, 01 August 2021. At the new Ayia Napa Underwater Sculpture Museum (MUSAN), located in the Pernera area of Ayia Napa, visitors, both swimmers with mask and flippers and divers, will be able to tour around an underwater forest, the first of its kind in the world. The whole project is inspired by British acclaimed sculptor Jason deCaires Taylor, a representatives of the eco-art movement who is behind the world's first underwater sculpture park – the Molinere Underwater Sculpture Park in Grenada. (Photo by Jason Decaires Taylor/EPA/EFE)
Edit Del
12 Dec 2021 05:45:00, post received 0 comments
Publication archive:
←   →
Popular tags:
All tags
Last searches: