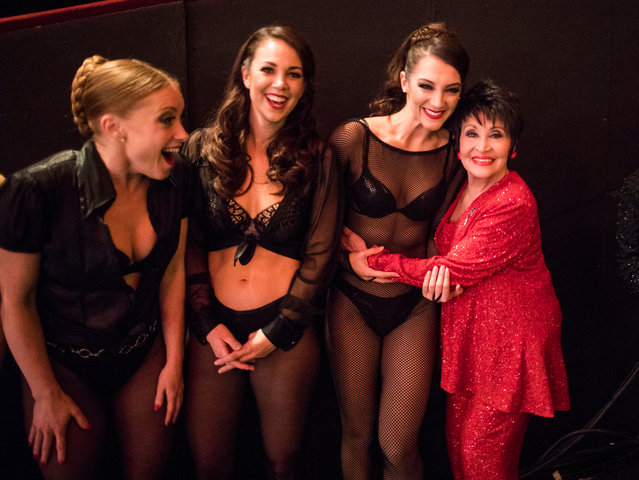 Chita Rivera (R) backstage with performers from “Chicago” during The Olivier Awards with Mastercard at Royal Albert Hall on April 8, 2018 in London, England. (Photo by David Levene/The Guardian) 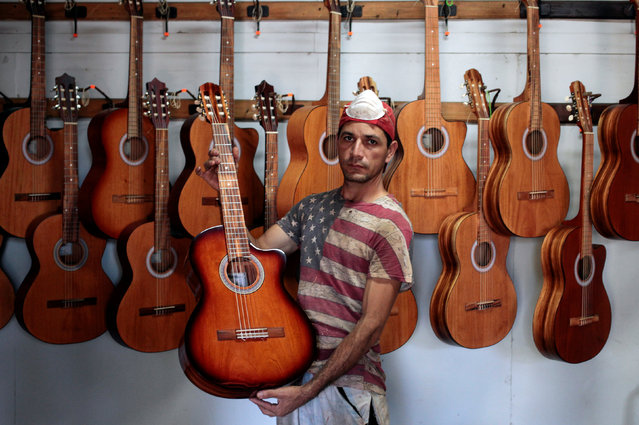 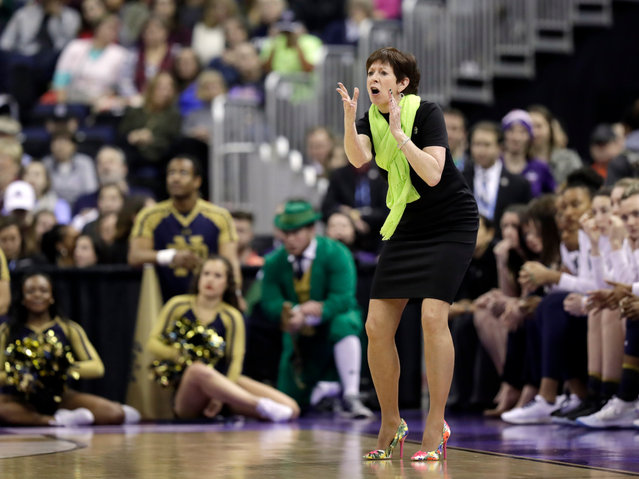 Notre Dame head coach Muffet McGraw yells from the sidelines during the first half against Mississippi State in the final of the women's NCAA Final Four college basketball tournament, Sunday, April 1, 2018, in Columbus, Ohio. (Photo by Tony Dejak/AP Photo) 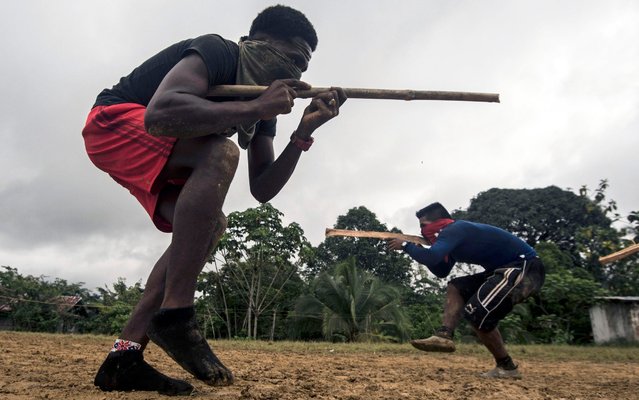 Members of the “Omar Gomez” Western War Front of the National Liberation Army (ELN) guerrilla perform tactical moves during a training session at their camp on the banks of the San Juan river, department of Choco, Colombia, on November 20, 2017. (Photo by Luis Robayo/AFP Photo) 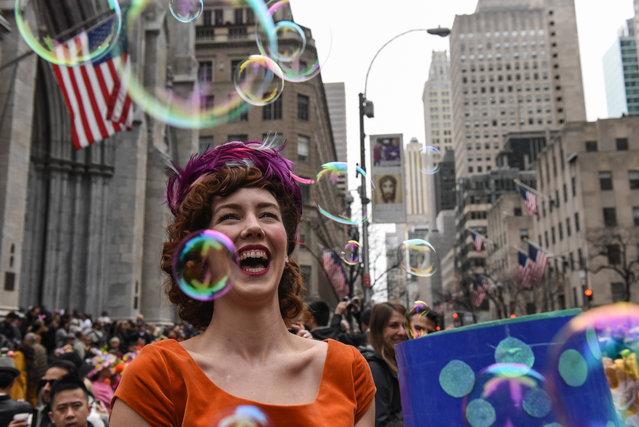 A woman wears an Easter bonnet while participating in the annual Easter parade along 5th Ave. on April 1, 2018 in New York City. Dateing back to the 1870s the the Easter parade attracts thousands of people each year. (Photo by Stephanie Keith/Getty Images) 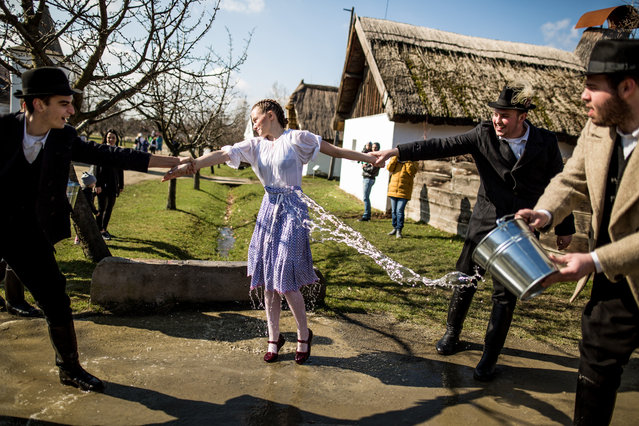 Members of the Mayossa folk dance group pour water on a young woman in Kiskunmajsa, Hungary on April 2, 2018. According to an old Hungarian tradition, celebrated for several hundred years, young men pour water on young women, who in exchange present their sprinklers with beautifully colored eggs on Easter Monday. (Photo by Mudra László/Origo Photo) 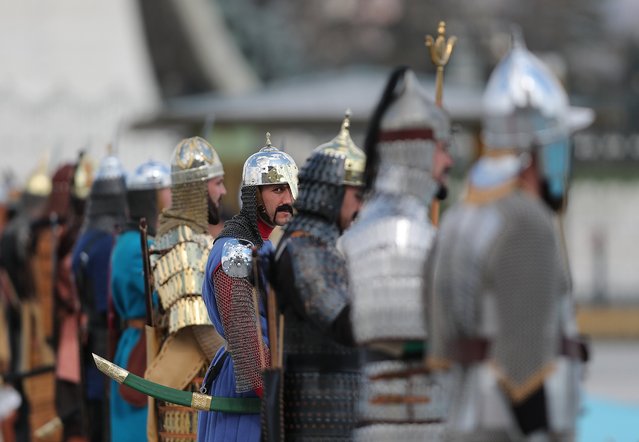 A honor guard (C) looks on as they stand in line prior to a welcome ceremony for Russian President Vladimir Putin at the Presidential Palace in Ankara, Turkey 03 April 2018. (Photo by Tolga Bozoglu/EPA/EFE) 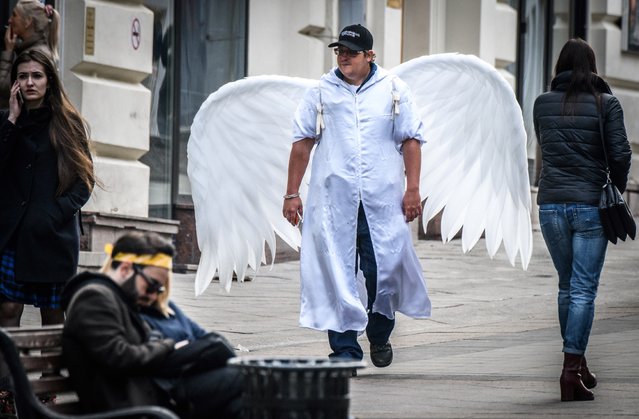 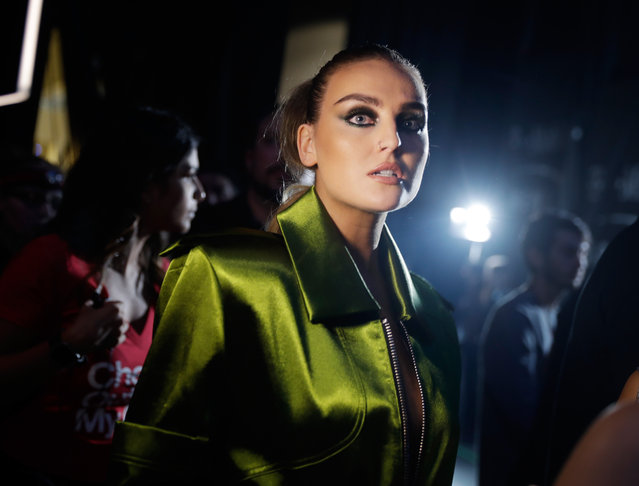 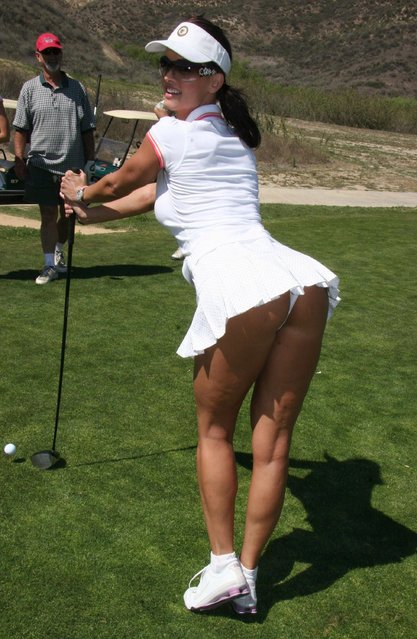 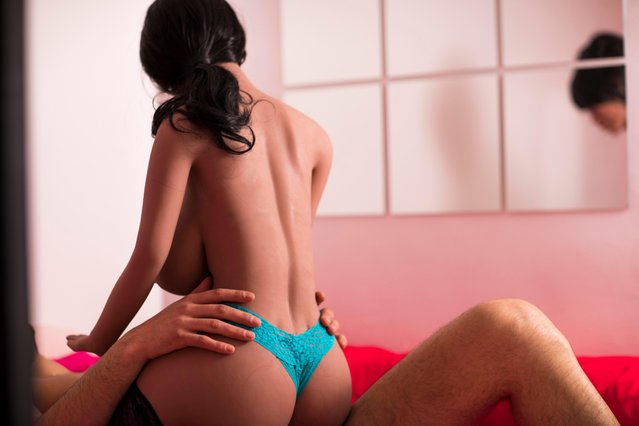 France s first brothel featuring sеx dolls opened on January 29, 2018 in Paris, France. The brothel has several rooms where customers can purchase the services of a silicone s*x doll instead of a prostitute. (Photo by Christophe Bertolin/IP3/Getty Images) 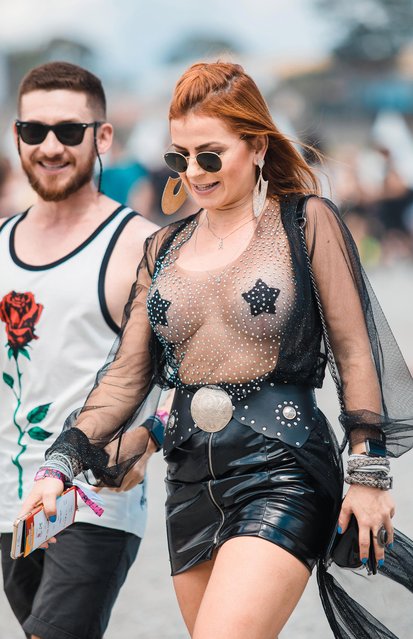 Festival style of a music fan during the third day of Lollapalooza Brazil Festival at Interlagos Racetrack on March 25, 2018 in Sao Paulo, Brazil. (Photo by Mauricio Santana/Getty Images) 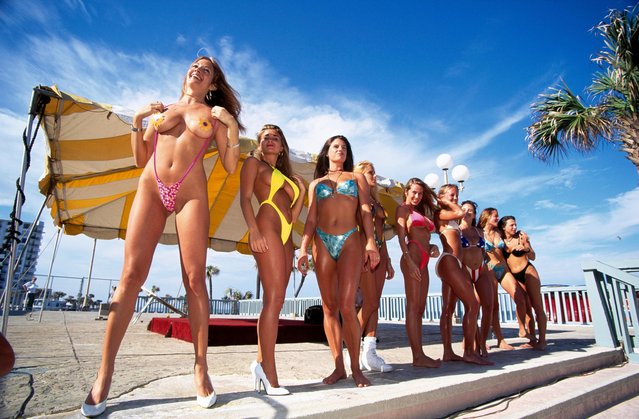 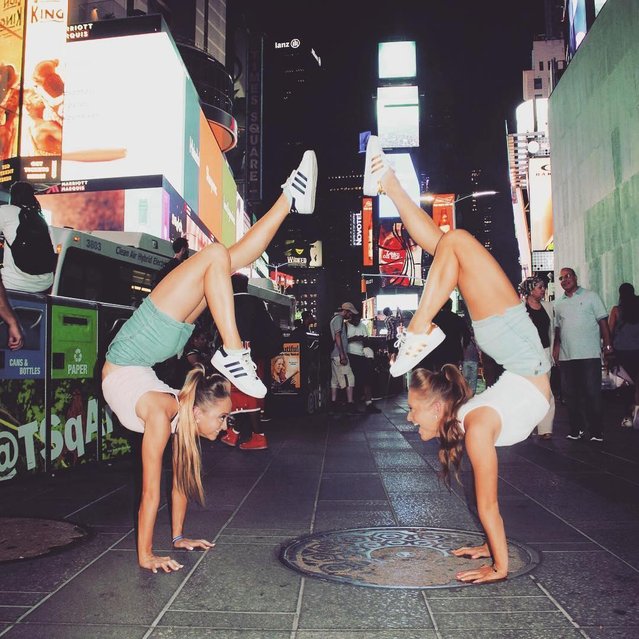 Teagan and Samantha Rybka, 22, from Perth, Australia started doing acrobatics at the tender age of three with the help of their mum, an acrobat herself. After years of painstakingly perfecting their craft, which also incorporates dance, the pair got their big break in 2013 when they made it to the Australia’s Got Talent semi-finals and have since gone on to travel the world to perform. (Photo by The Rybka Twins/Mediadrumworld) 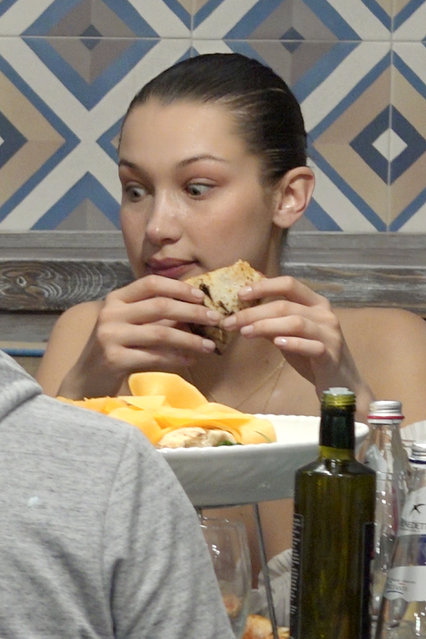 Model Bella Hadid is seen eating a pizza at Assaje Restaurant on January 15, 2018 in Milan, Italy. (Photo by Splash News and Pictures) 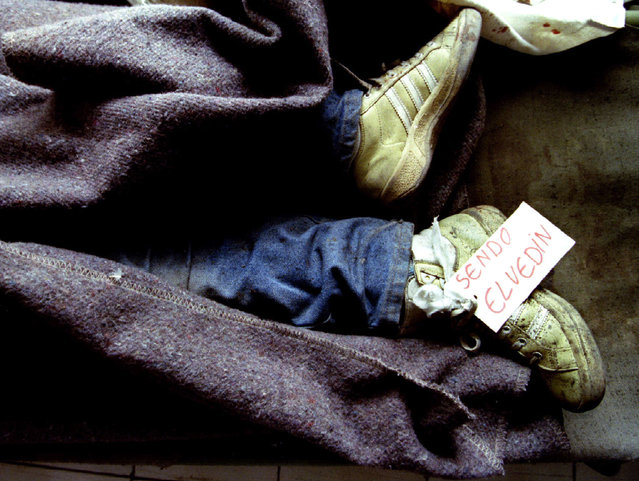 The feet of a 10 year old Bosnian Muslim boy Elvedin Sendo, clad in grass-stained running shoes and marked with his name tag, protrude from under a blanket at a hospital morgue after his school came under a shelling attack in Sarajevo in a March 22, 1993 file photo. Bosnian Serb wartime general Ratko Mladic was arrested in Serbia on May 26, 2011 after years on the run from international genocide charges, opening the way for the once-pariah state to approach the European mainstream. Mladic, accused of orchestrating the massacre of 8,000 Muslim men and boys in the town of Srebrenica and a brutal 43-month siege of Sarajevo during Bosnia's 1992-5 war, was found in a farmhouse owned by a cousin, a police official said. (Photo by Chris Helgren/Reuters) 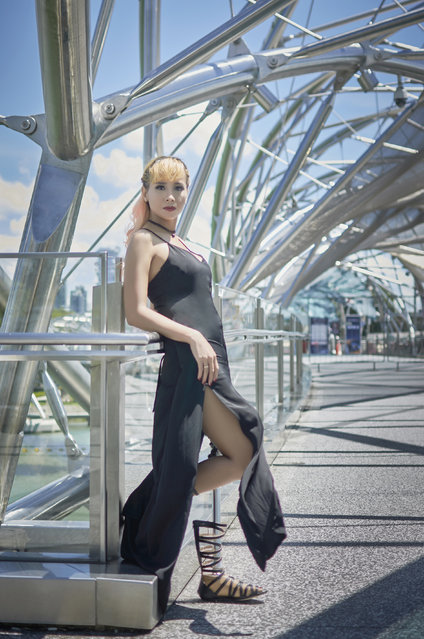 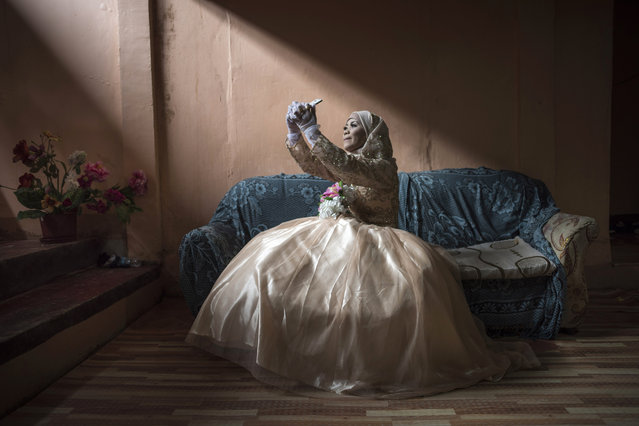 Bride Katty Malang Mikunug, takes a photo of herself in her wedding dress on October 21, 2017 in Saguiaran in Lanao del Sur, southern Philippines. Paulo Mamayo Ambor, 22, a resident of Marawi who got displaced by the fighting between government troops and IS-inspired militants, weds Katty Malang Mikunug, 22, a resident of an adjacent town in Saguiaran. Philippines President Rodrigo Duterte declared Marawi liberated, following the death of Abu Sayyaf leader Isnilon Hapilon and one of the Maute brothers, Omar Maute, after nearly five months of fierce urban battle inside the besieged city. The fighting started May 23, and left more than 1,000 people dead, whilst displacing at least 400,000 people. (Photo by Jes Aznar/Getty Images) 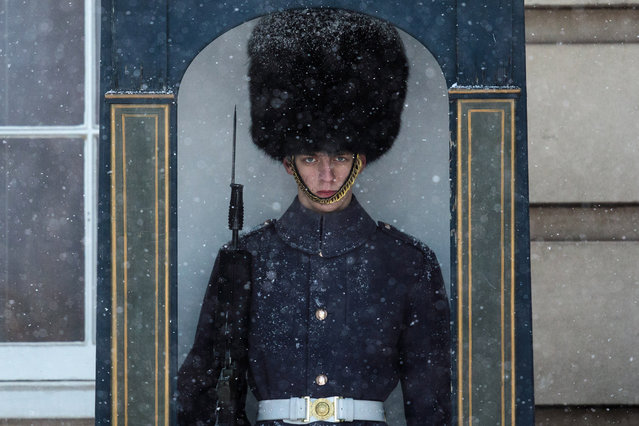 A guard stands in a guard box in front of Buckingham Palace during a snow flurry on February 26, 2018 in London, United Kingdom. Freezing weather conditions dubbed the “Beast from the East” brings snow and sub-zero temperatures to the UK. (Photo by Jack Taylor/Getty Images) 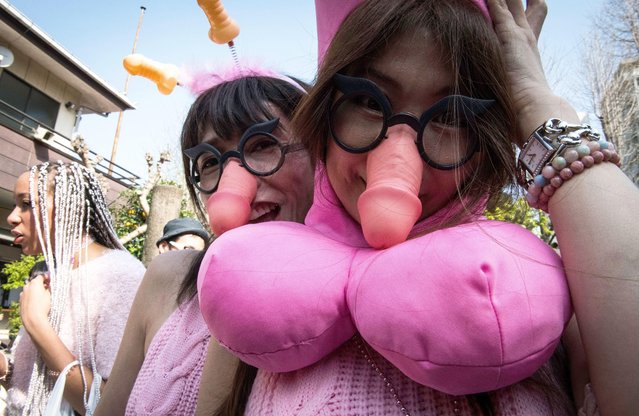