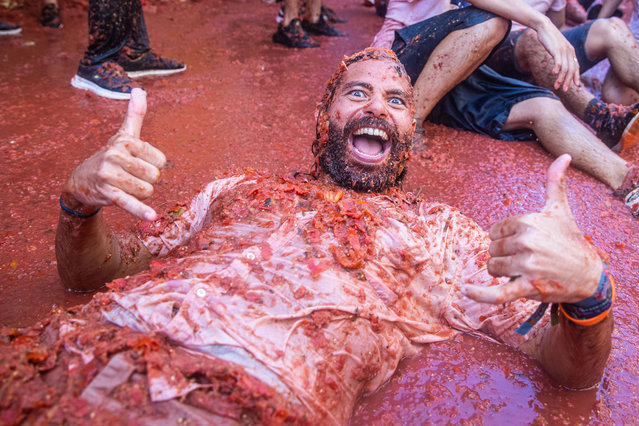 A reveler lays is tomato pulp during the Tomatina festival on August 31, 2022 in Bunol, Spain. The world's largest food fight festival, La Tomatina, consists of throwing overripe and low-quality tomatoes at each other. (Photo by Zowy Voeten/Getty Images) 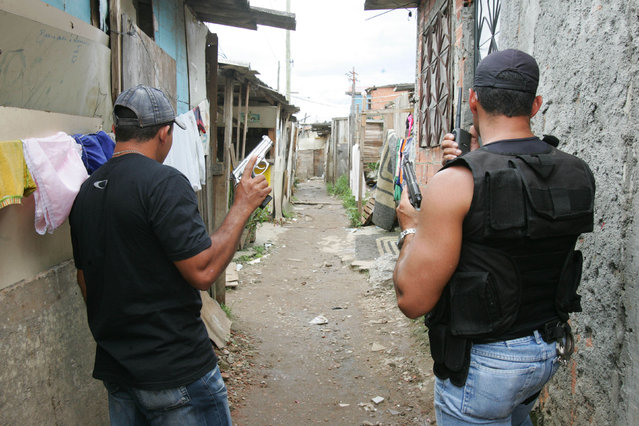 Members of the “militia” guard the streets in Rio de Janeiro, January 5, 2007. Militia, new, illegal security forces are mushrooming across Rio and are made up of active and former police, private security guards and off-duty firefighters and prison guards. (Photo by Wilton Junior/Agencia Estado via AP Photo) 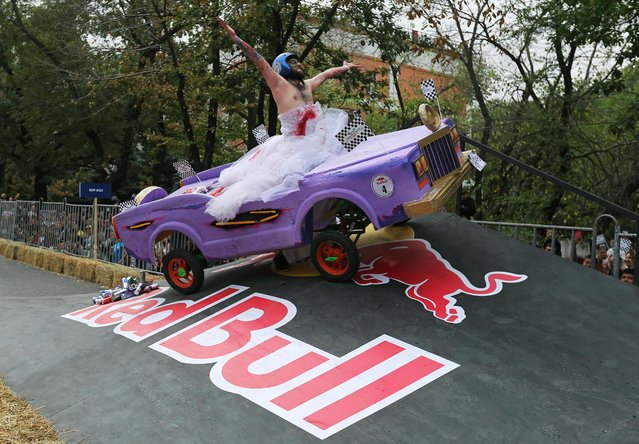 A competitor drives his homemade vehicle without an engine during the Red Bull Soapbox Race in Almaty, Kazakhstan on September 11, 2022. (Photo by Pavel Mikheyev/Reuters) 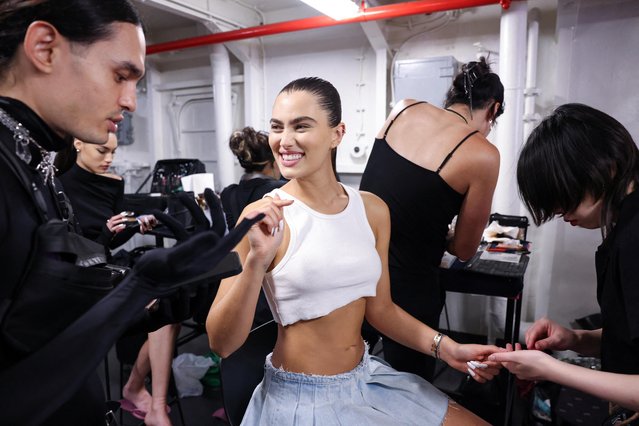 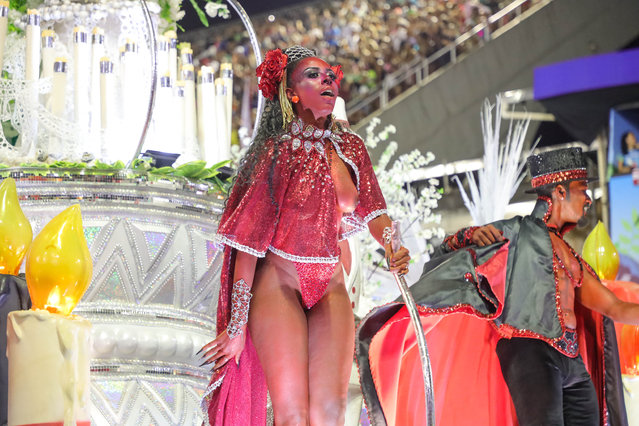 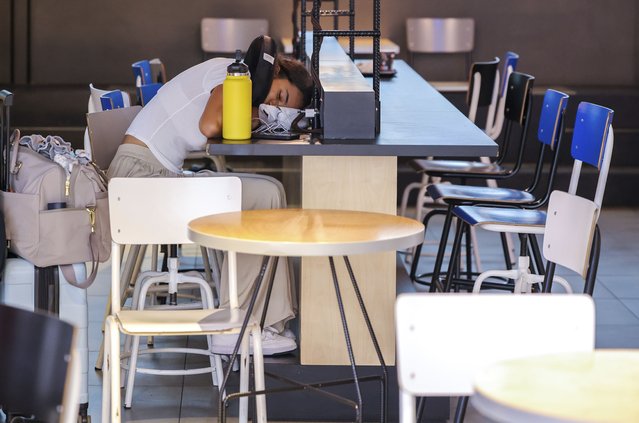 A woman sleeps on a charging station table in the departures hall at Brussels international airport during a general strike in Brussels, Monday, June 20, 2022. After two years of pandemic restrictions, travel demand is back with a vengeance but airlines and airports that slashed jobs during the depths of the COVID-19 crisis are struggling to keep up. With the busy summer tourism season underway in Europe, passengers are encountering chaotic scenes at airports, including lengthy delays, canceled flights and headaches over lost luggage. (Photo by Olivier Matthys/AP Photo) 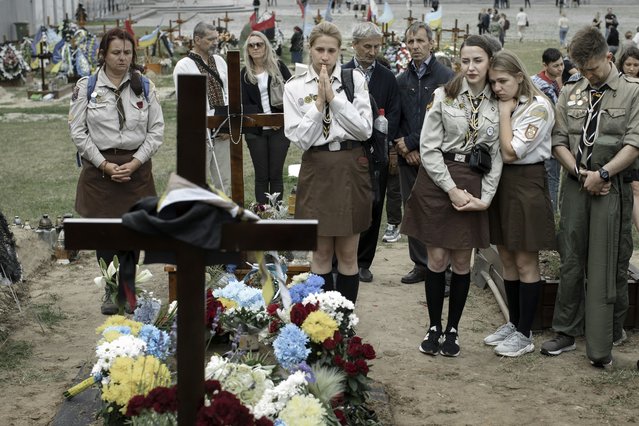 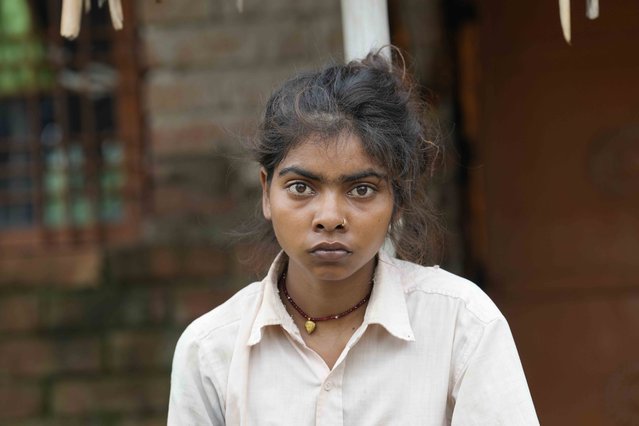 Khushboo Bind, center, sits for a photograph after she was injured by lightning that killed her sister-in-law, also called Khusboo, in a paddy field on July 25, in front of their house at Piparaon village on the outskirts of Prayagraj, in the northern Indian state of Uttar Pradesh, Thursday, July 28, 2022. Seven people, mostly farmers, were killed by lightning in a village in India's northern Uttar Pradesh state, police said Thursday, bringing the death toll by lightning to 49 people in the state this week. (Photo by Rajesh Kumar Singh/AP Photo) 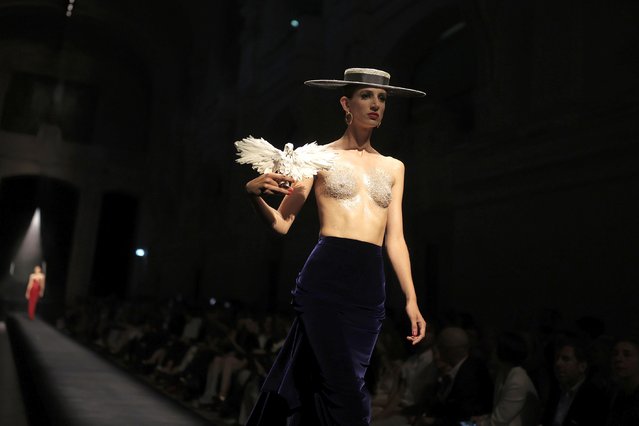 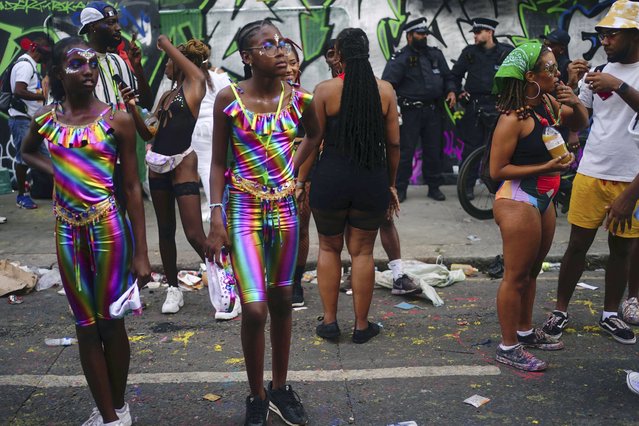 Carnival-goers gather during the Family Day at the Notting Hill Carnival which returned to the streets for the first time in two years, after it was thwarted by the pandemic, in London, Sunday, August 28, 2022. (Photo by Victoria Jones/PA Wire via AP Photo) 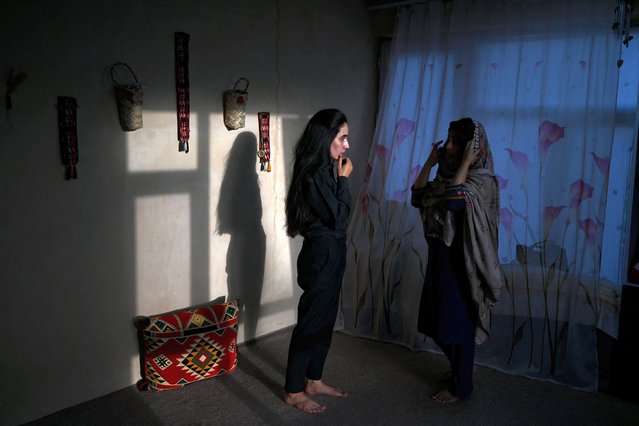 In this photograph taken on May 28, 2022, an Afghan female presenter with news network 1TV, Lima Spesaly (C) speaks with her sister Banafsha Wahab inside their residence in Kabul. After initially defying the Taliban order to cover their faces on air, Afghan women television presenters are broadcasting news and other programmes wearing masks. Spesaly, said it was difficult to work like this for hours but vowed to fight for her rights and of other Afghan women that are being increasingly crushed by the hardline Islamist rulers. (Photo by Wakil Kohsar/AFP Photo) 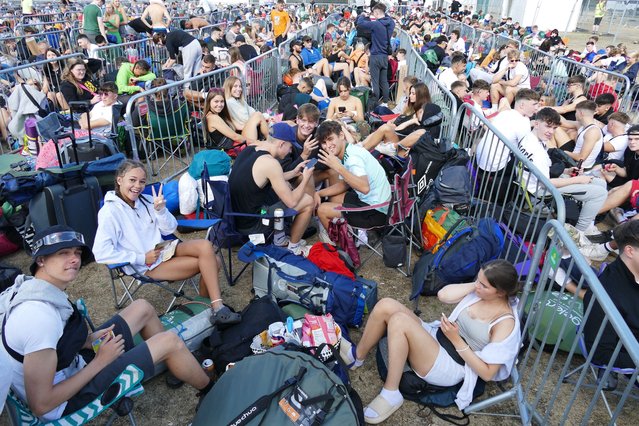 Music fans queue with their camping gear as they wait to get into the Reading festival in Reading, United Kingdom on August 24, 2022. (Photo by Geoffrey Swaine/Rex Features/Shutterstock) 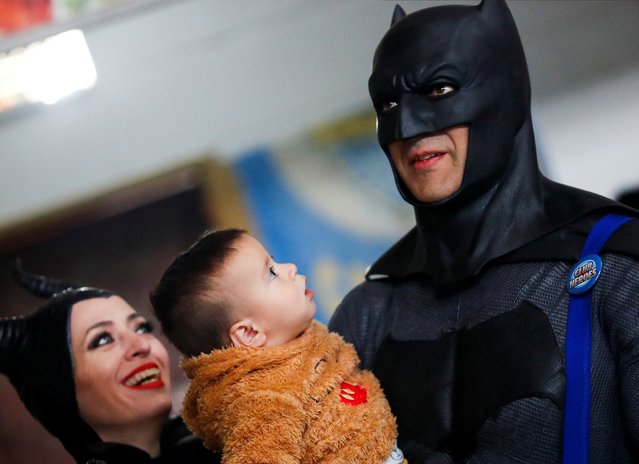 Argentine volunteer and organizer of the so-called Hero Club (Club de Heroes), Damian Gomez, who impersonates comic book superhero Batman, plays with the son of an inmate during a visit at the 33rd prison in Los Hornos as part of a wider program for vulnerable minors, on the outskirts of Buenos Aires, Argentina on April 30, 2022. (Photo by Agustin Marcarian/Reuters) 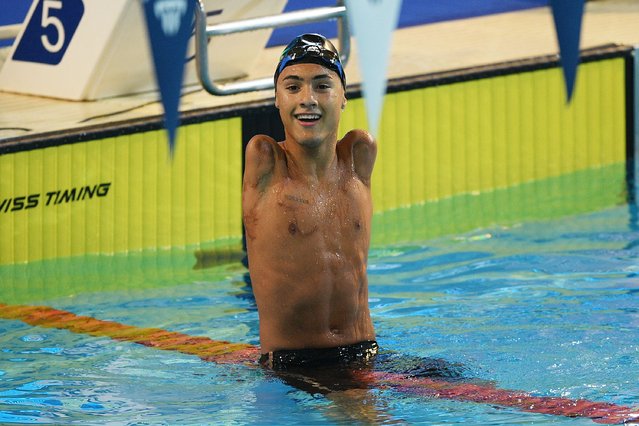 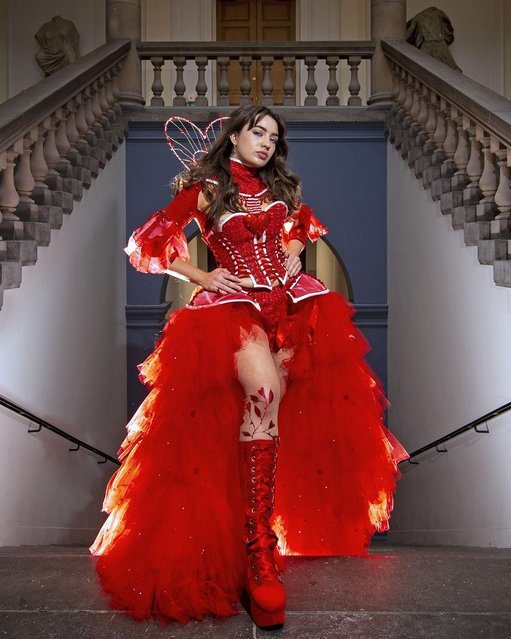 The Queen of Hearts from Alice’s Adventures in Wonderland, as interpreted by Tal Beer, an Edinburgh College of Art student of performance costume early May 2022. (Photo by Neil Hanna/The Times) 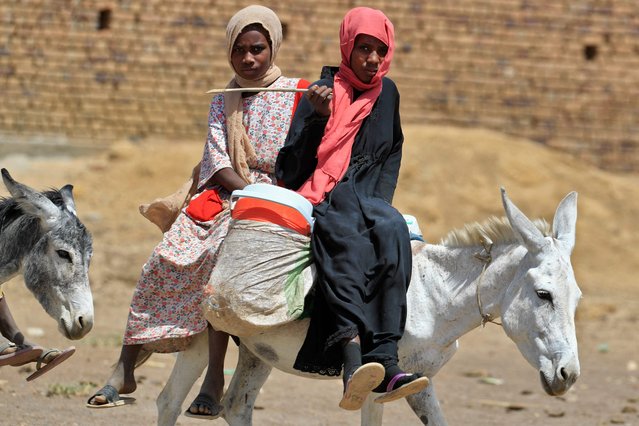 Sudanese women ride their donkeys in the village of al-Laota, about 70 kilometres southwest of Sudan's capital Khartoum on May 28, 2022. Impoverished Sudan has for years been grappling with a grinding economic crisis, which deepened after last year's military coup prompted Western governments to cut crucial aid. The October coup derailed a fragile transition put in place following the 2019 ouster of president Omar al-Bashir. (Photo by Ashraf Shazly/AFP Photo) 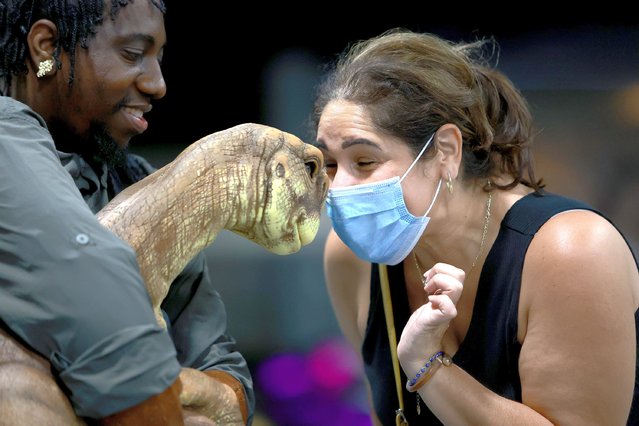 Jackie Galarza greets the Camarasaurus dinosaur held by Houston Ferguson during the “Jurassic Quest” experience at Broward County Convention Center on July 08, 2022 in Fort Lauderdale, Florida. Fans of dinosaurs can walk through moving and roaring animatronic replicas of the now extinct creatures during the three-day event. (Photo by Joe Raedle/Getty Images) 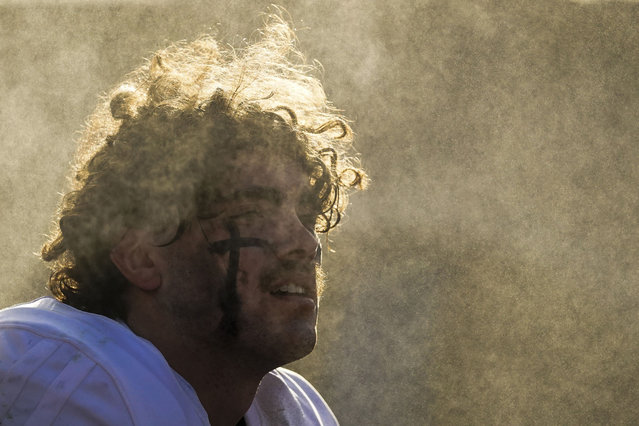 Rice linebacker Aidan Siano (44) sits on the sideline in a misting fan during the second half of an NCAA college football game against Southern California in Los Angeles, Saturday, September 3, 2022. (Photo by Ashley Landis/AP Photo) 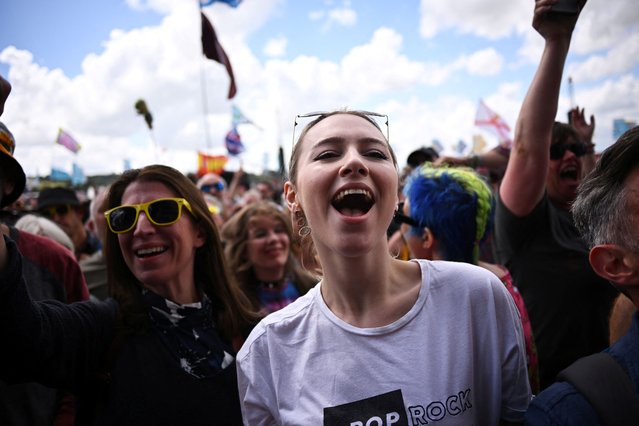 Revellers dance as Skunk Anansie perform on the Pyramid stage at Worthy Farm in Somerset during the Glastonbury Festival in Britain, June 25, 2022. (Photo by Dylan Martinez/Reuters) 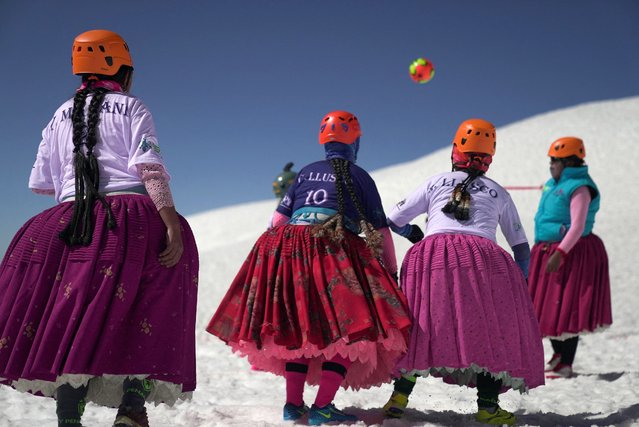 Aymara indigenous women members of the Climbing Cholitas of Bolivia Warmis play a football match at about 6.000 m, in the last flat area before making summit at the 6.088-metre Huayna Potosi mountain, near El Alto, Bolivia, on August 14, 2022. The Climbing Cholitas of Bolivia Warmis is a group dedicated to campaigning for the rights of indigenous women through mountaineering. (Photo by Martìn Silva/AFP Photo)
Edit Del
18 Sep 2022 04:55:00, post received 0 comments
Publication archive:
←   →
Popular tags:
All tags
Last searches: