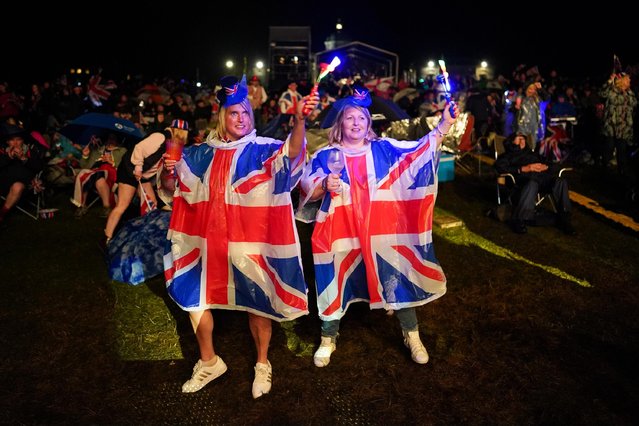 Audience members watch the performance during the Castle Howard Proms event on August 21, 2021 in York, England. Held in the gardens of the famous stately home and forming part of the Castle Howard Live Music Weekend 2021, the outdoor picnic concert celebrates the best of British with a rousing medley of traditional orchestral anthems, popular classics and songs from musicals, played by the London Gala Orchestra. (Photo by Ian Forsyth/Getty Images) 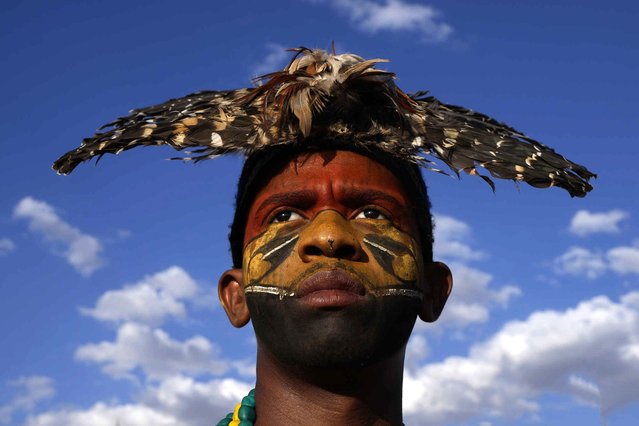 A young Indigenous man with a traditional owl feather headdress looks on during the “Luta pela Vida” or Struggle for Life camp, in front of the National Congress, in Brasilia, Brazil, Tuesday, August 24, 2021. Indigenous groups are in the capital for a weeklong Struggle for Life mobilization to protests against a Supreme Court ruling that could undermine rights to their lands, and against President Jair Bolsonaro's government. (Photo by Eraldo Peres/AP Photo) 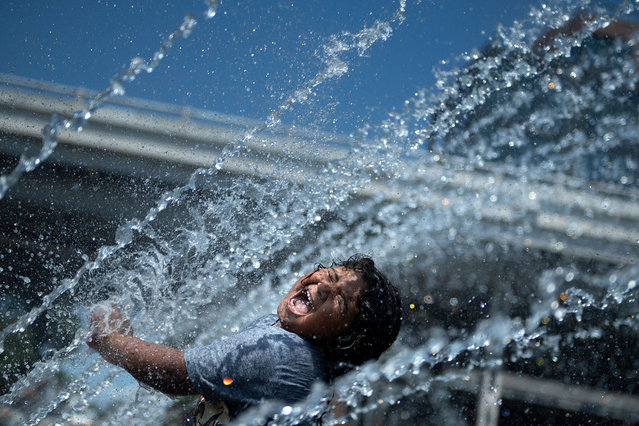 Micaela Montelara plays in the fountain at Georgetown Waterfront Park during a heatwave on August 13, 2021, in Washington, DC. July was the hottest month ever recorded, according to data released, by the National Oceanic and Atmospheric Administration (NOAA) on August 13, 2021. The combined land- and ocean-surface temperature around the world, according to NOAA, was 1.67 degrees Fahrenheit (0.93°C) above the 20th century average of 60.4F (15.7°C) since record-keeping started 142 years ago. (Photo by Brendan Smialowski/AFP Photo) 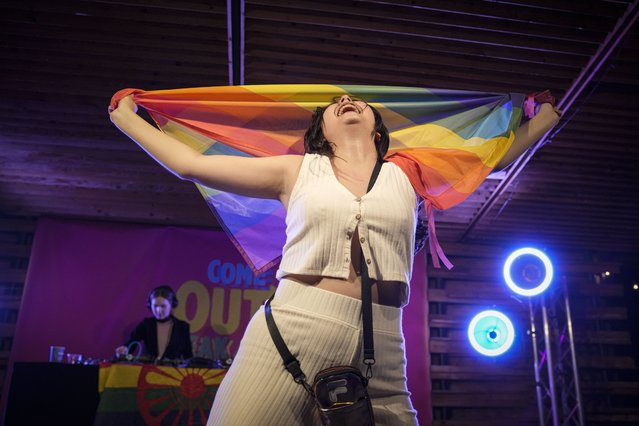 A spectator dances holding a rainbow flag at Pride Park, a venue for artistic shows ahead the Pride 2021 in Bucharest, Romania, Thursday, August 12, 2021. (Photo by Vadim Ghirda/AP Photo) Sarab village resident Raihan comforts her 1-year-old son after having an early morning opium smoke with family members in the Badakhshan province of Afghanistan, July 13, 2009. Raihan was addicted to opium while pregnant with her son making him an addict at birth. “When he was born, he would cry day and night. But when she blows smoke in his face, he sleeps”, said her father Islam Beg. In dozens of mountain hamlets in this remote corner of Afghanistan, opium addiction has become so entrenched that whole families, from toddlers to old men, are addicts. (Photo by Julie Jacobson/AP Photo) 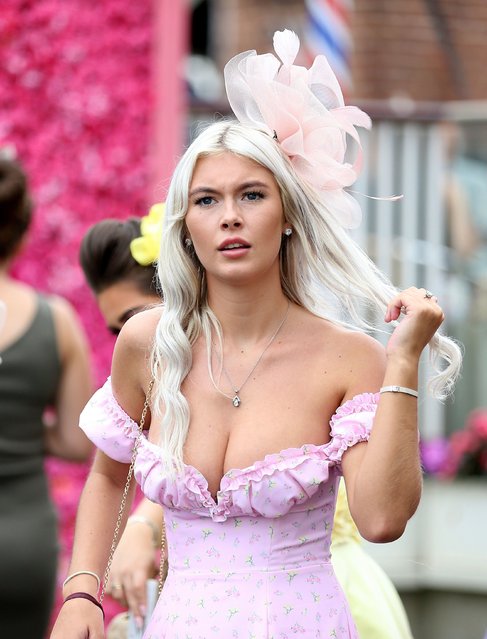 Racegoers wait for racing to start on Sky Bet Ebor day of the Welcome to Yorkshire Ebor Festival 2021 at York racecourse on Saturday, August 21, 2021. (Photo by Nigel French/PA Images via Getty Images) 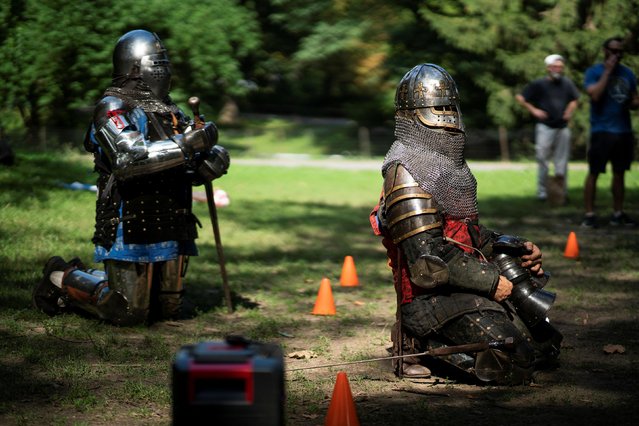 People in full medieval armor get ready to take part in a combat at Central Park in New York, U.S., August 14, 2021. (Photo by Eduardo Munoz/Reuters) 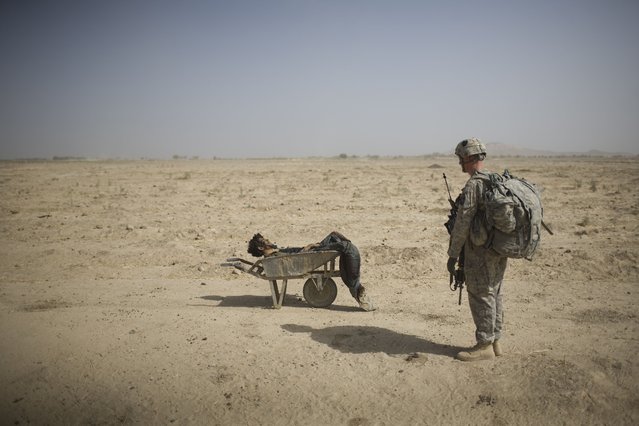 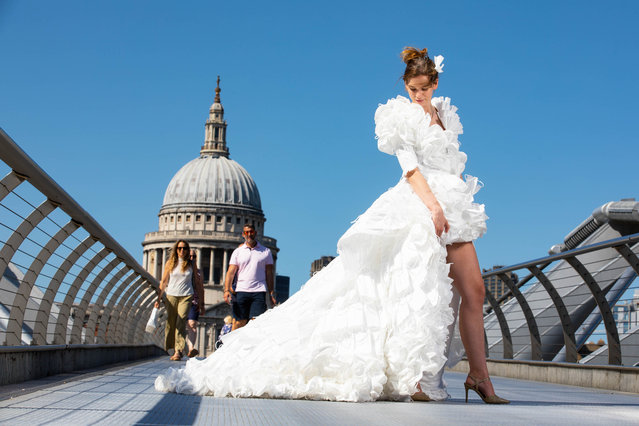 Jemima Hambro models, on the Millennium Bridge in London on Monday July 19, 2021, a wedding dress designed by Tom Silverwood and made from over 1,500 unwanted face masks, for wedding planning website, Hitched, to celebrate all restrictions on weddings lifting in England from Monday. (Photo by David Parry/PA Images via Getty Images) 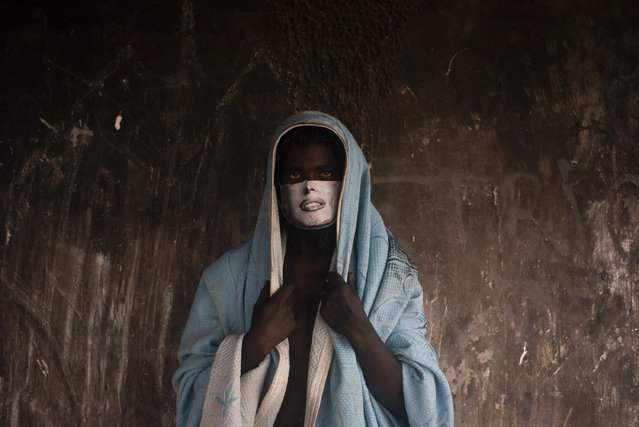 A homeless man living on the streets of city poses in front of a wall in Rio De Janeiro, Brazil on August 19, 2021. Homeless people look for food in street trashes and ask for food for NGOs in the city center. Unemployment, high food prices lead increase of new homeless people amid the novel type of coronavirus (COVID-19) pandemic. Brazil registers 36,315 new cases and 979 more deaths by COVID-19, which raises the total number of fatal victims of the disease in the country to 572,641, informed the Ministry of Health. (Photo by Fabio Teixeira/Anadolu Agency via Getty Images) 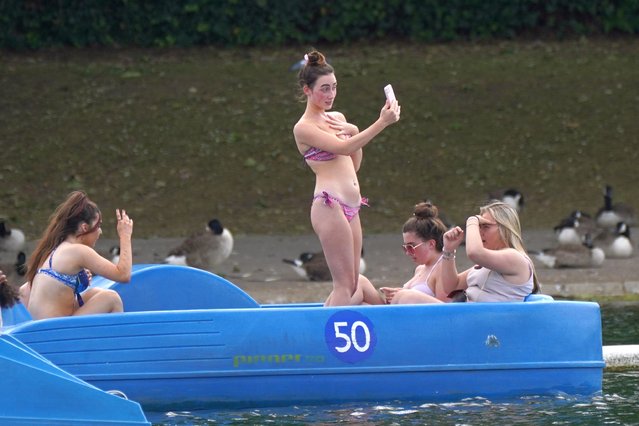 A woman takes a selfie whilst riding in a pedalo during the hot weather on the Serpentine in Hyde Park, London on Wednesday, June 16, 2021. Wednesday could be the hottest day of the year so far as parts of the UK are set to bask in 30-degree heat. (Photo by Yui Mok/PA Wire Press Association) 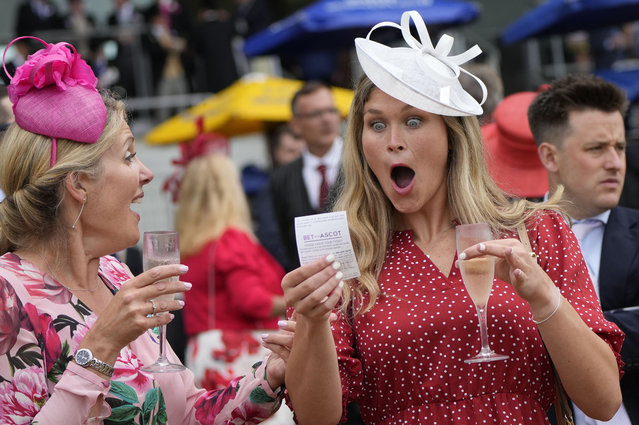 A racegoer reacts to picking a winner in the first race on the third day of the Royal Ascot horserace meeting, which is traditionally known as Ladies Day, at Ascot, England Thursday, June 17, 2021. (Photo by Alastair Grant/AP Photo) 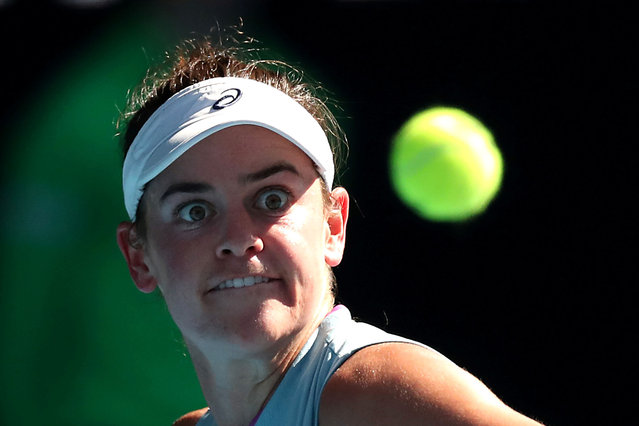 Jennifer Brady of the United States hits a backhand against Karolina Muchova of the Czech Republic in the semi-finals of the woman's singles, during day 11 of the 2021 Australian Open at Melbourne Park on February 18, 2021 in Melbourne, Australia. (Photo by Asanka Brendon Ratnayake/Reuters)