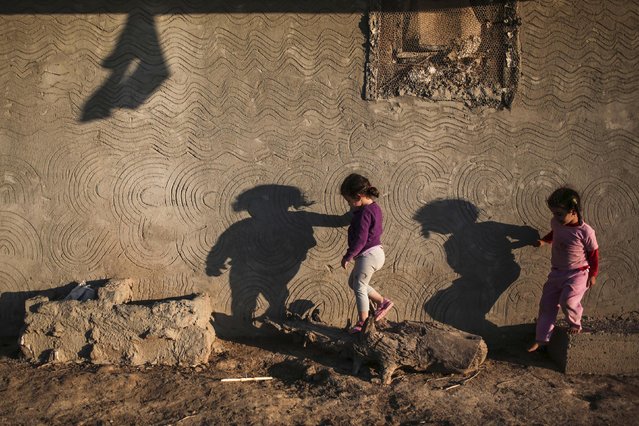 The shadows of children cast on the wall of their home in the Nile Delta town of Behira, 300 kilometers (186 miles) north of Cairo, Egypt, Wednesday, May 6, 2015. (Photo by Mosa'ab Elshamy/AP Photo) 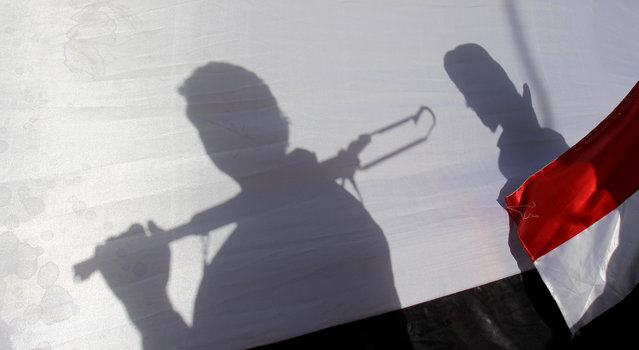 The shadow of Shiite rebels, known as Houthis, are cast on a large representation of the Yemeni flag as they attend a demonstration against an arms embargo imposed by the U.N. Security Council on Houthi leaders, in Sanaa, Yemen, Thursday, April 16, 2015. (Photo by Hani Mohammed/AP Photo) 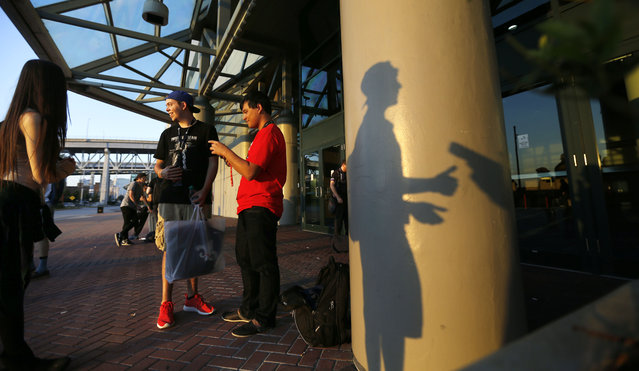 The shadow of James "Clayster" Eubanks, 22, one of the top ranked gamers in the world, falls on a post as he talks to a reporter during a break outside the Major League Gaming World Finals in New Orleans, Friday, October 16, 2015. (Photo by Gerald Herbert/AP Photo) 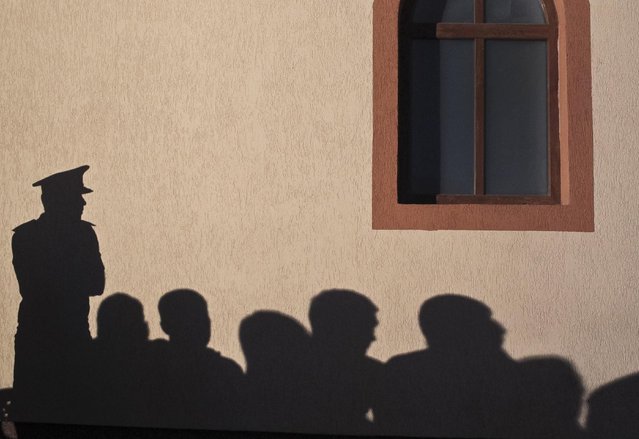 In this photo taken late Thursday, May 7, 2015, a prison guard, left, and seated inmates cast shadows on a wall while waiting for the beginning of a rock concert by Romanian band Pro Musica, inside the Popa Sapca jail in Timisoara, western Romania. (Photo by Adi Piclisan/AP Photo) 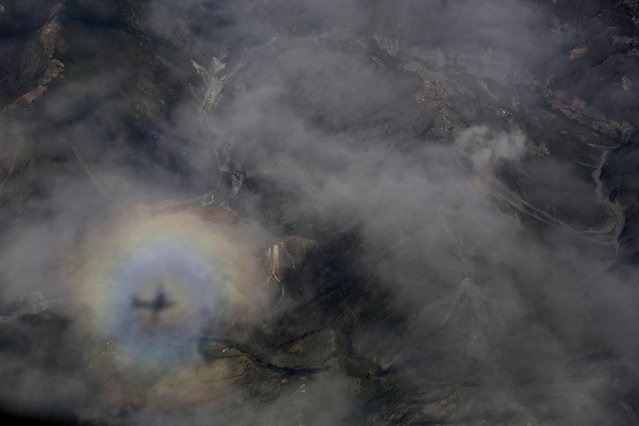 The shadow of an Indian Air Force aircraft carrying relief material is cast on clouds as it approaches landing in Kathmandu, Nepal, Monday, April 27, 2015. (Photo by Altaf Qadri/AP Photo) 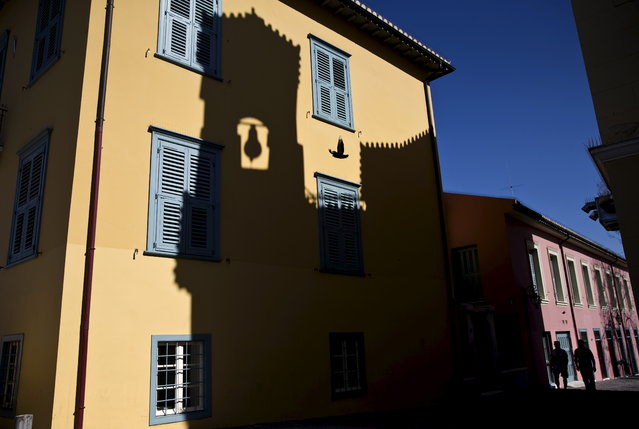 People walk at the Plaka district under the Acropolis hill in Athens, Greece July 23, 2015. (Photo by Ronen Zvulun/Reuters) 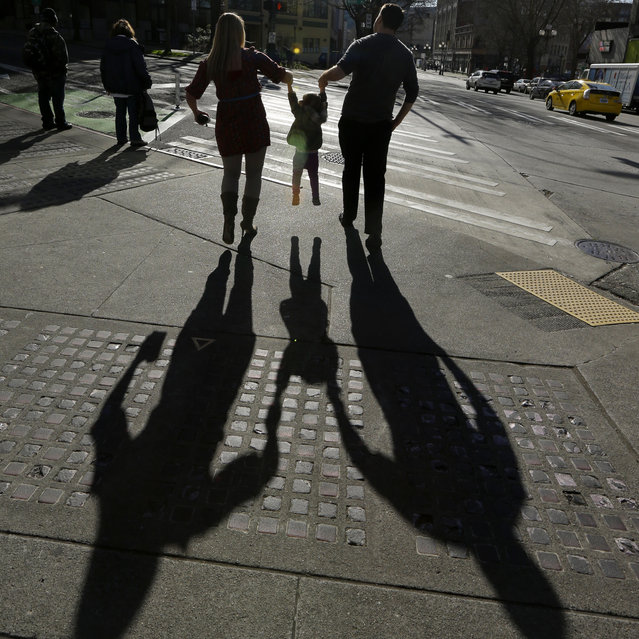 In this March 3, 2015 file photo, a couple holds up their 2-year-old daughter in Seattle. According to a study released on Thursday, April 16, 2015, for U.S. mothers, the typical time between having babies is about 2 1/2 years, according to the first government study of its kind on the subject. (Photo by Ted S. Warren/AP Photo) 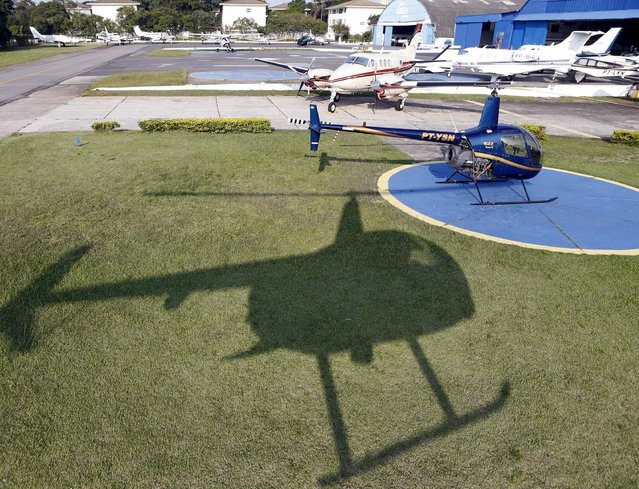 A Robson 44 helicopter casts a shadow as it prepares to land at Campo de Marte airport in Sao Paulo April 12, 2015. (Photo by Paulo Whitaker/Reuters) 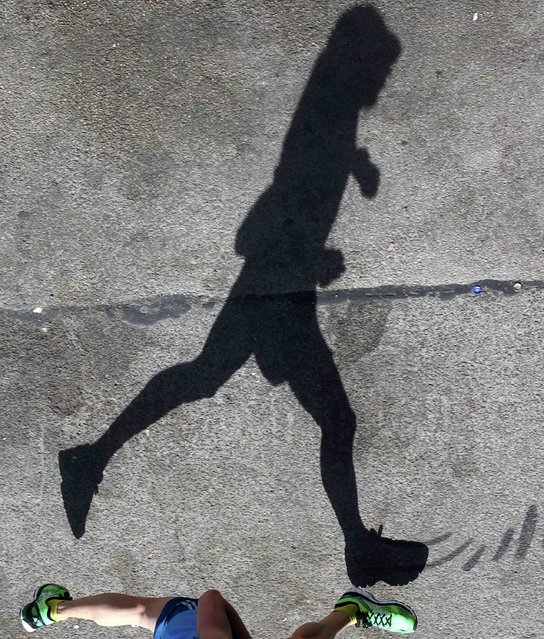 A jogger casts a shadow as he runs on the bank of the Donaukanal channel in the centre of Vienna April 14, 2015. (Photo by Heinz-Peter Bader/Reuters) 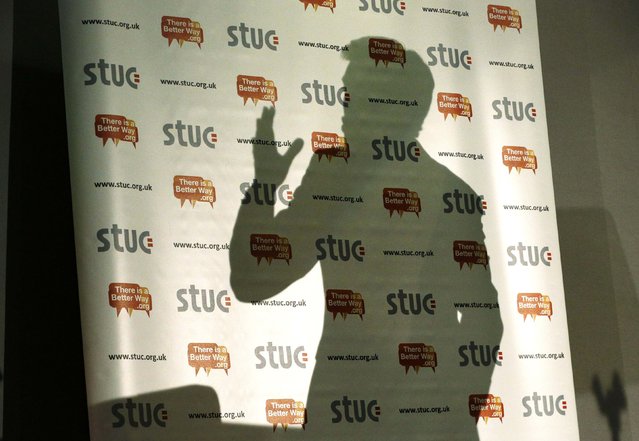 Britain's opposition Labour Party leader Ed Miliband casts a shadow on a backdrop as he speaks at the Scottish Trade Union Congress in Ayr, Scotland, April 20, 2015. (Photo by Russell Cheyne/Reuters) 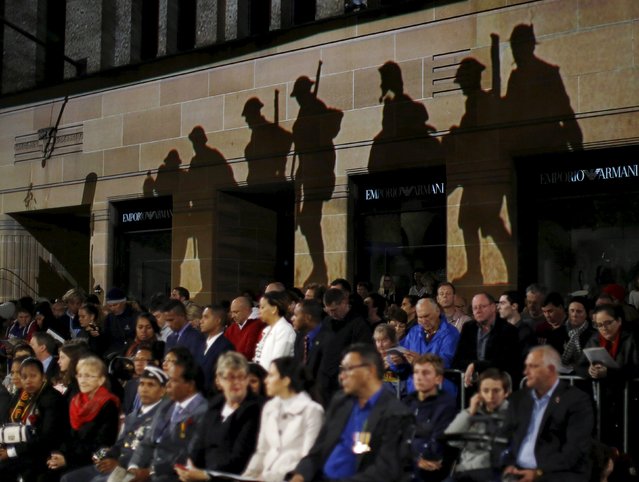 Silhouettes of ANZAC (Australian and New Zealand Army Corps) troops are projected onto the wall of a building above the crowd during the dawn of ANZAC Day 100th anniversary commemoration at Sydney's Cenotaph in Australia, April 25, 2015. (Photo by Jason Reed/Reuters) 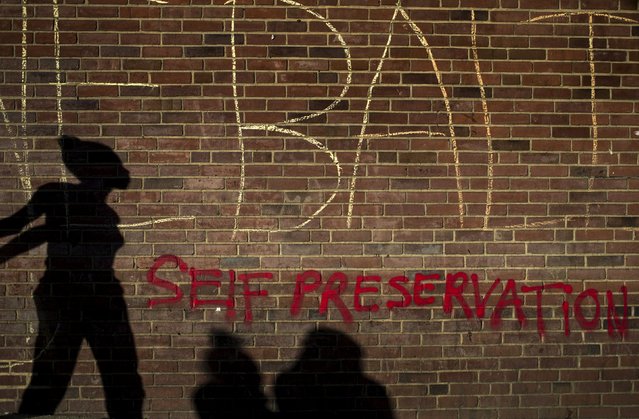 The shadow of a woman, who was taking part in a march, falls on a brick wall past a message which reads “One Baltimore, Self Preservation”, in west Baltimore, Maryland May 2, 2015. (Photo by Adrees Latif/Reuters) 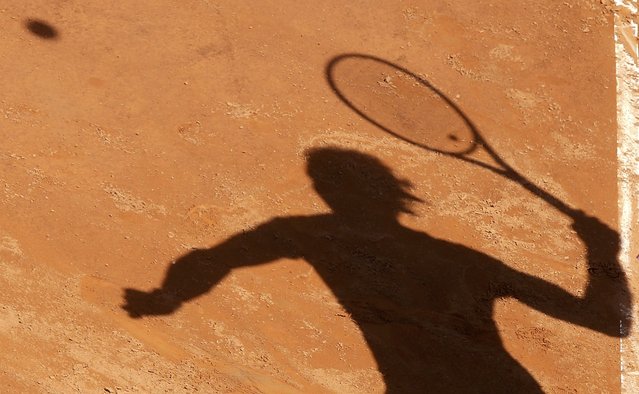 Rafael Nadal of Spain casts a shadow on the ground as he serves to Marsel Ilhan of Turkey during their second round match at the Rome Open tennis tournament in Rome, Italy May 13, 2015. (Photo by Max Rossi/Reuters) 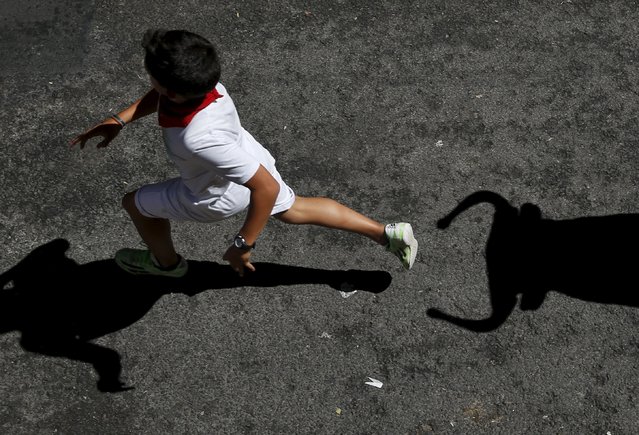 A boy is chased by a toy bull as he takes part in the Encierro Txiki (Little Bull Run) during the San Fermin festival in Pamplona, northern Spain, July 13, 2015. (Photo by Susana Vera/Reuters) 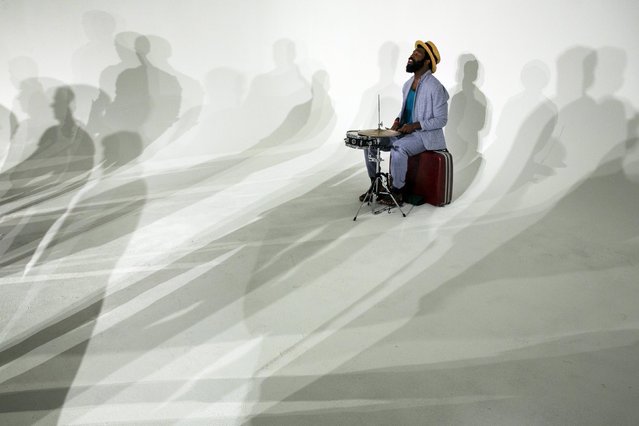 A drummer performs amongst the shadows of models at the Cadet presentation during Men's Fashion Week, in New York, July 13, 2015. (Photo by Lucas Jackson/Reuters) 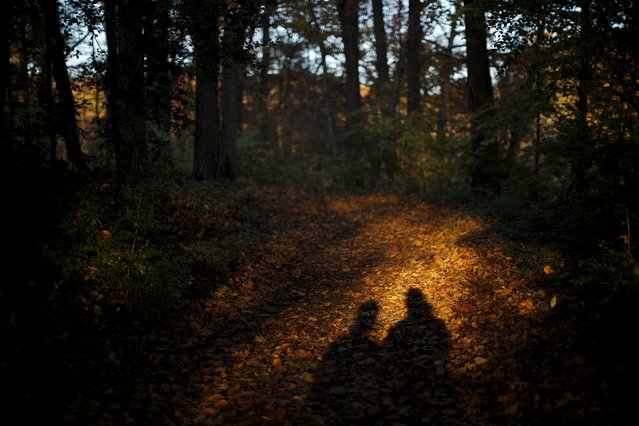 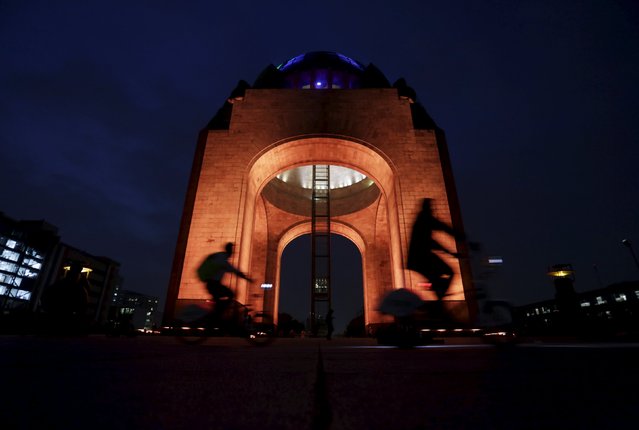 Cyclists ride past the illuminated Monument to the Revolution in Mexico City, November 23, 2015. (Photo by Daniel Becerril/Reuters) 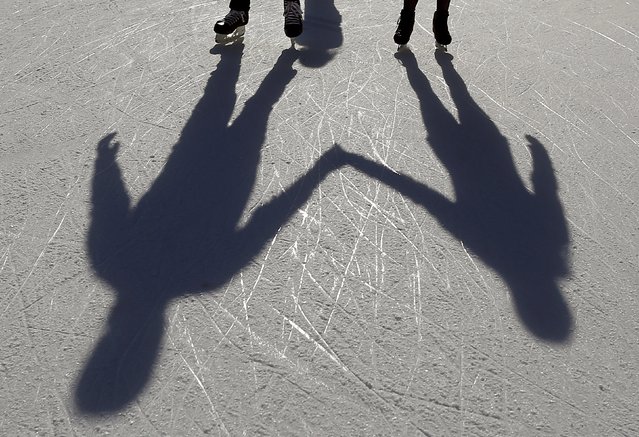 A couple casts shadows on the ice as they hold hands and skate on an outdoor rink in Millennium Park in Chicago, Illinois, United States, November 24, 2015. (Photo by Jim Young/Reuters) 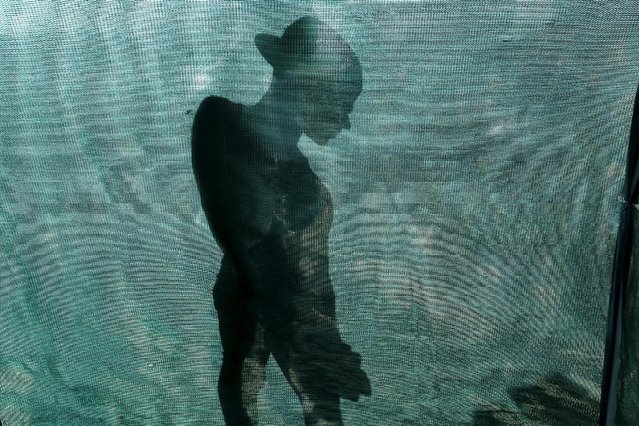 The shadow of a Cuban migrant is cast on a net surrounding a makeshift kitchen at a shelter in La Cruz, Costa Rica, November 25, 2015. (Photo by Juan Carlos Ulate/Reuters) 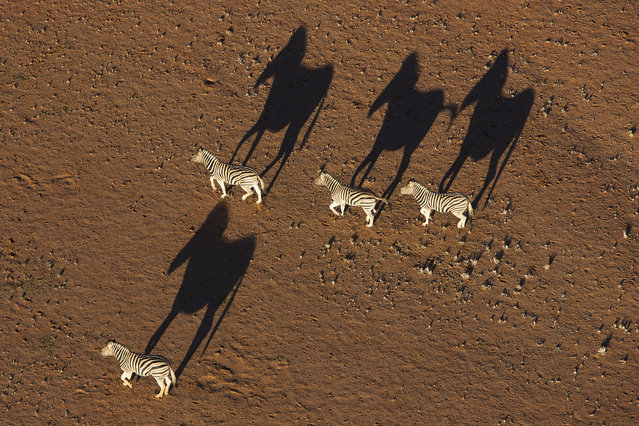 Zebra run across the desert, in October, 2014, in the Namib Desert, Namibia. (Photo by Theo Allofs/Barcroft Media) 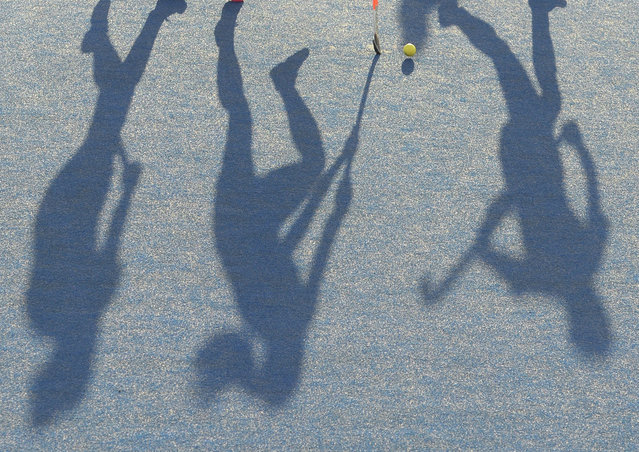 The shadows of Scotland and Belgium players on the pitch during the EuroHockey 2015 women's match at the Lee Valley Hockey Centre, Queen Elizabeth Olympic Park in London, Britain, 28 August 2015. (Photo by Hannah Mckay/EPA) 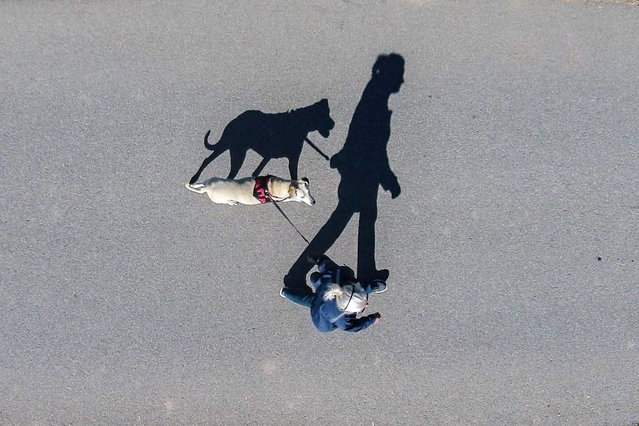 Strong autumn sunlight casts deep shadows on a street as a woman takes her pet dog for a walk in Straubing, Bavaria, southern Germany 1 October 2015. (Photo by Armin Weigel/EPA) 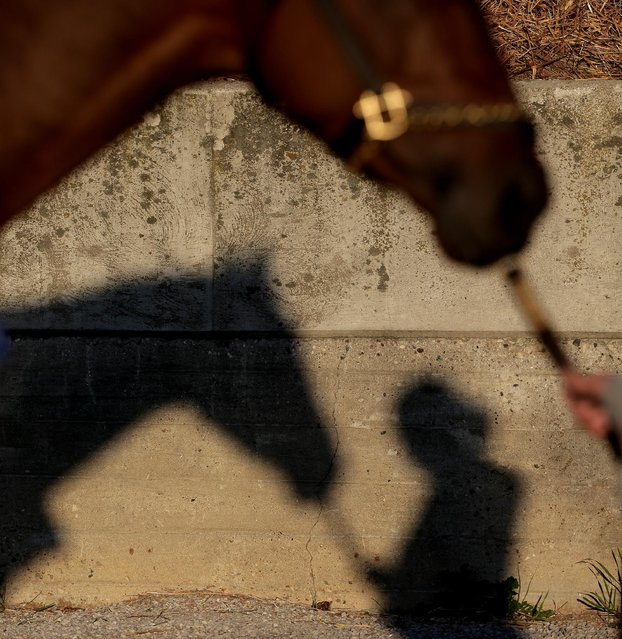 A worker holds a horse as it gets a bath after a morning workout at Churchill Downs Tuesday, April 28, 2015, in Louisville, Ky. (Photo by Charlie Riedel/AP Photo) 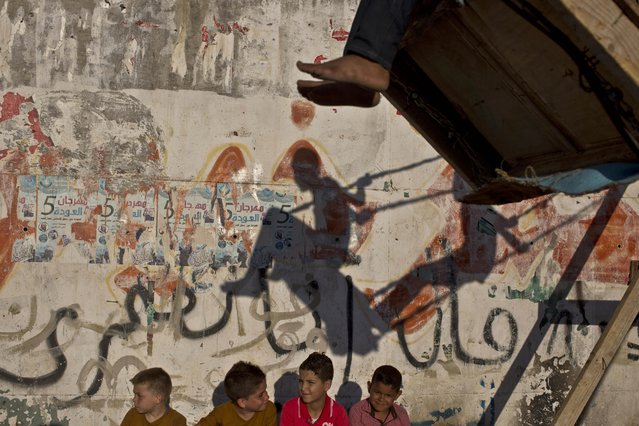