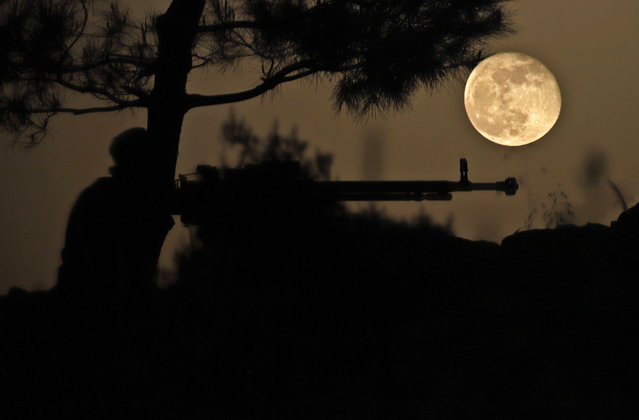 April's Pink Super Moon rises behind a fighter of the Turkish-backed Free Syrian Army in the rebel-held southern countryside of Syria's northwestern province of Idlib on April 28, 2021. (Photo by Abdulaziz Ketaz/AFP Photo) 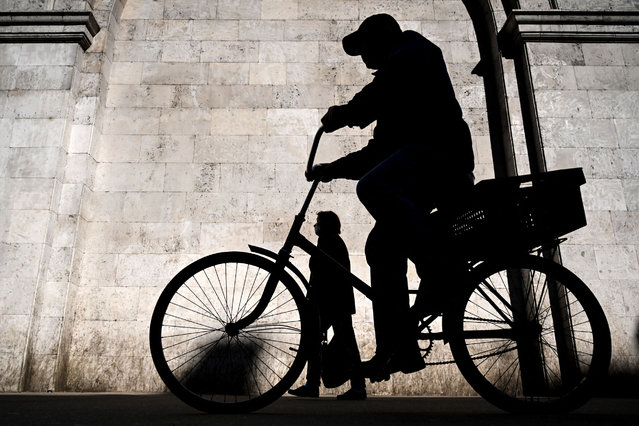 A man rides a bicycle during a sunny morning in central Moscow on April 29, 2021. (Photo by Kirill Kudryavtsev/AFP Photo) 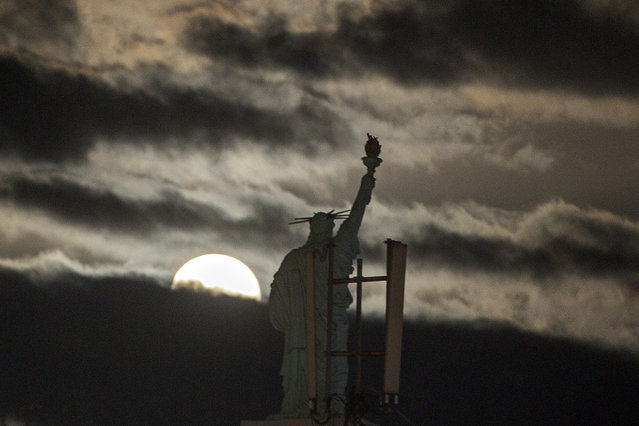 The moon rises over a replica of Statue of Liberty in Kosovo capital Pristina on Tuesday, April 27, 2021. This moon is a supermoon, meaning it appears larger than an average full moon because it is nearer the closest point of its orbit to Earth. (Photo by Visar Kryeziu/AP Photo) 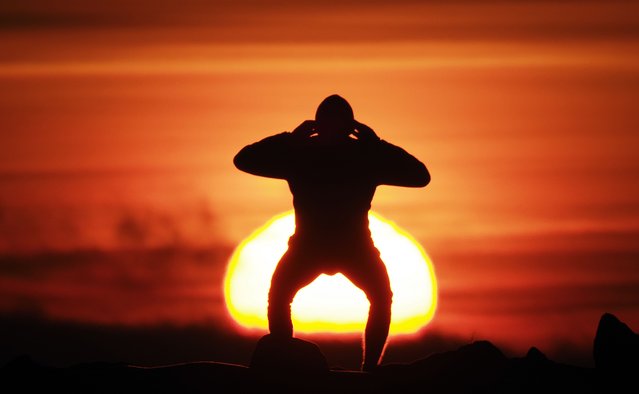 A man does physical exercise during sunset over the Finnish Gulf coast in St. Petersburg, Russia, Wednesday, April 14, 2021. (Photo by Dmitri Lovetsky/AP Photo) 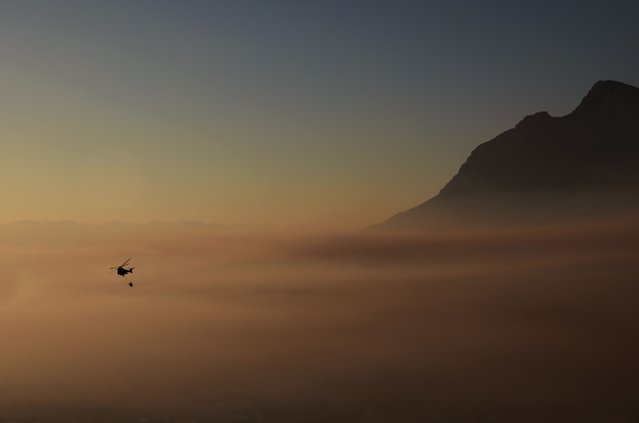 A helicopter hovers above the smoke which engulfs the city of Cape Town, South Africa, Tuesday April 20, 2021. A massive fire spreading on the slopes of the city's famed Table Mountain, at right, is kept under control as firemen and helicopters take advantage of the low winds to contain the blaze. (Photo by Nardus Engelbrecht/AP Photo) 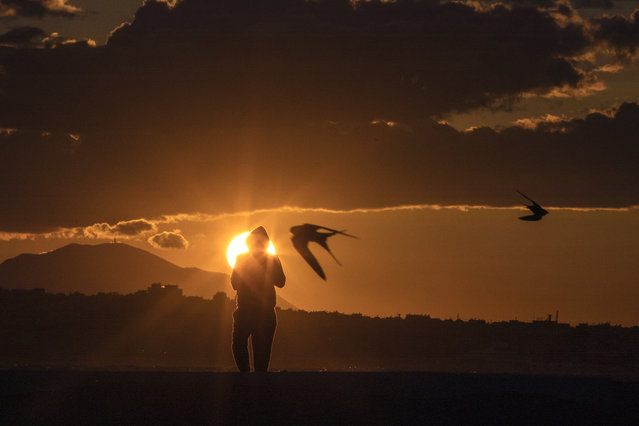 Birds fly as a man walks during a sunset in Alimos, a seaside suburb of Athens, on Tuesday, April 20, 2021. (Photo by Petros Giannakouris/AP Photo) 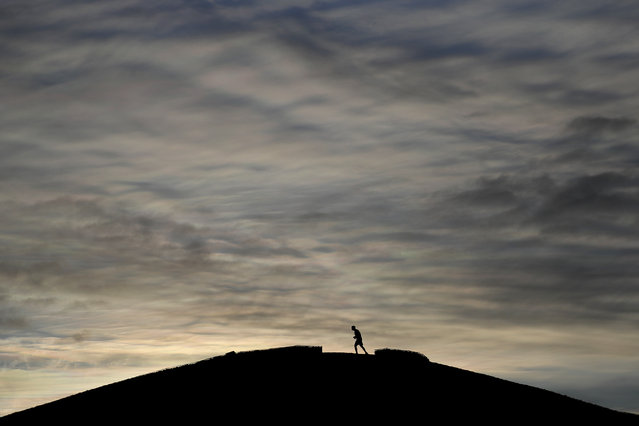 A jogger takes an early morning run as lockdown measures start to be lifted in London, Tuesday, April 6, 2021. Temperatures dropped to –7C (19.4F) in some parts of the UK overnight as Arctic winds brought an end to the good weather. (Photo by Kirsty Wigglesworth/AP Photo) 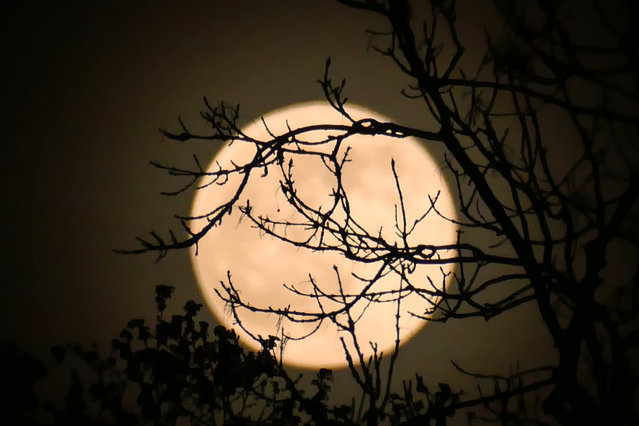 The pink super moon high in the skies over the copse in Dunsden, UK on April 26, 2021. It is named after phlox, the pink flowers that bloom in spring, is also a Super Moon. Other names for this Full Moon are Sprouting Grass Moon, Fish Moon, Hare Moon, Egg Moon, and Paschal Moon. (Photo by Geoffrey Swaine/Rex Features/Shutterstock) 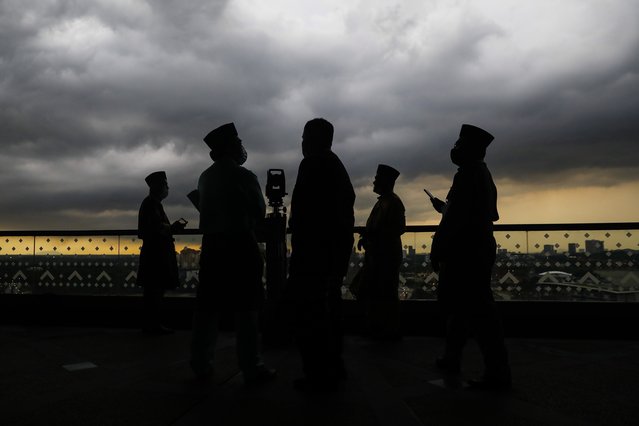 A silhouette of Malaysian Islamic religious officers as they observe the position of the moon using a theodolite to determine the sighting of the new moon to mark the start of the fasting month of Ramadan in Putrajaya, Malaysia, 12 April 2021. During Ramadan, the ninth month of Islam's lunar calendar, observant Muslims abstain from eating, drinking and smoking from dawn to dusk. Fasting is one of Islam's five pillars, alongside declaration of faith, prayer five times a day, alms-giving, and the pilgrimage to holy sites in Saudi Arabia. (Photo by Fazry Ismail/EPA/EFE) 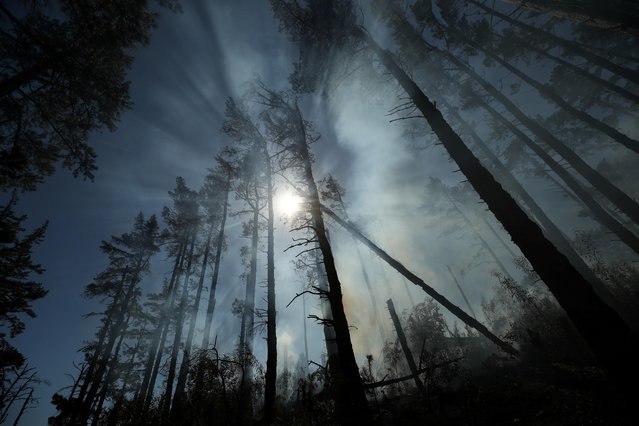 Smoke shrouded trees are seen, as a bushfire burns on the slopes of Table Mountain in Cape Town, South Africa, April 20, 2021. (Photo by Mike Hutchings/Reuters) 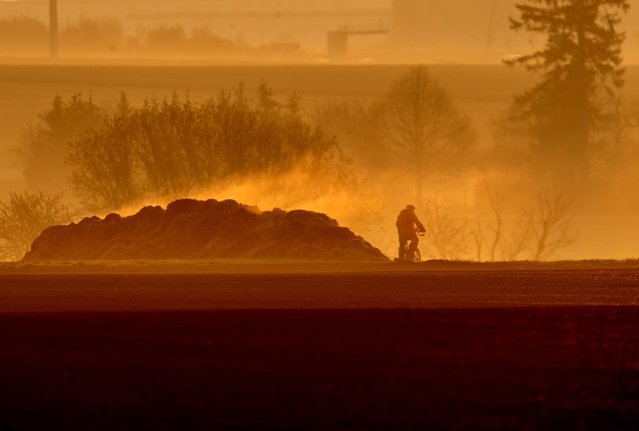 A man rides his bike past a steaming dunghill as the sun rises in Frankfurt, Germany, Tuesday, April 20, 2021. (Photo by Michael Probst/AP Photo) 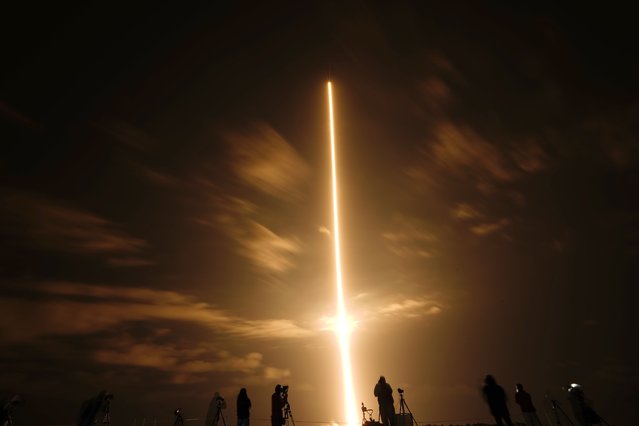 A SpaceX Falcon 9 rocket with the Crew Dragon space capsule lifts off from pad 39A at the Kennedy Space Center on Friday, April, 23, 2021 in Cape Canaveral, Fla. (Photo by Brynn Anderson/AP Photo) 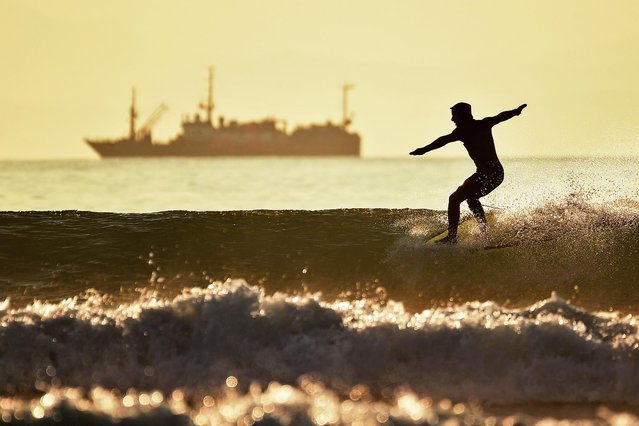 A man enjoys surfing in Sobol Bay, off the coast of Ussuri Bay in Vladivostok, Russia on April 14, 2021. (Photo by Yuri Smityuk/TASS) 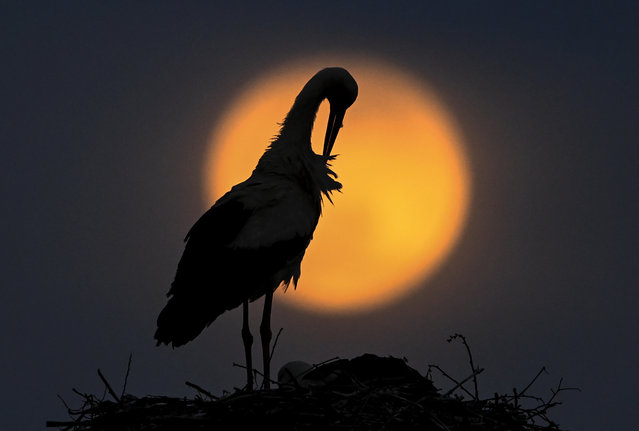 The Super Pink Moon rises behind the stork in a nest in the village of Rzanicino near Skopje, Republic of North Macedonia, 26 April 2021. The super full moon is named this way because it is at its closest to earth and thus appears bigger than a normal full moon. (Photo by Georgi Licovski/EPA/EFE) 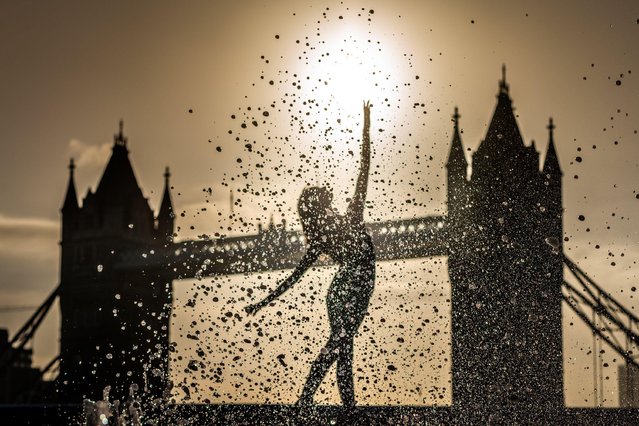 Rebecca Olarescu, a Masters screendance student at the London Contemporary Dance School (LCDS), performs during a dramatic sunrise at the fountains near Tower Bridge in London on April 27, 2021, ahead of International Dance Day on 29th April. First celebrated in 1982, International Dance Day has taken place every year since in anniversary celebration of the birth of Jean-Georges Noverre (1727-1810), the creator of modern ballet. (Photo by Guy Corbishley/Alamy Live News) 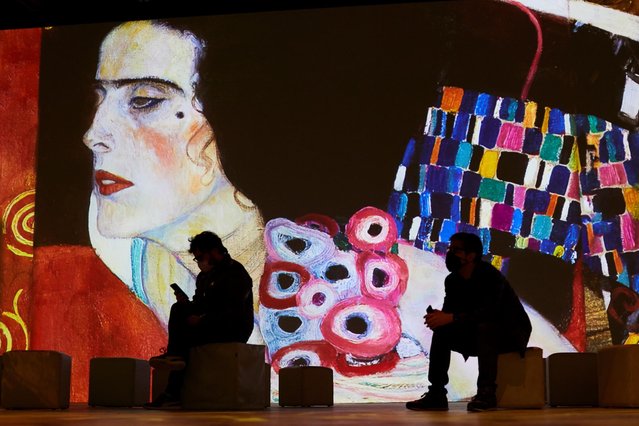 People visit the exhibition “Klimt: the immersive experience” held at Digital Arts IDEAL in Barcelona, Catalonia, Spain, 15 April 2021. The viewers immerse themselves in the Vienna of the turn of the century to experience firsthand the evolution of Klimt's work and its world with projections with more than 1,000 square meters of screen, experience with virtual reality glasses, exhibition spaces and interactive tools. (Photo by Alejandro Garcia/EPA/EFE) 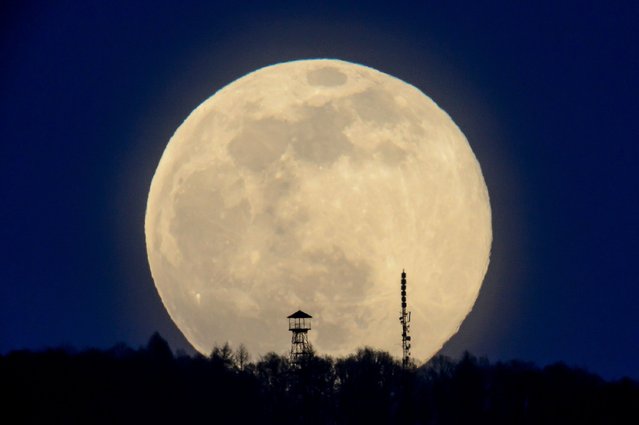