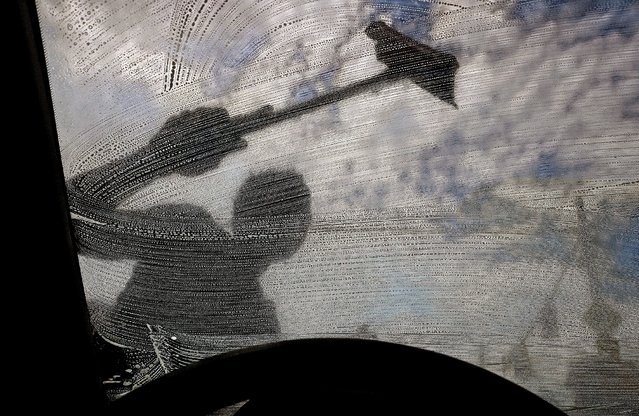 A young man (one of a group of “Squeegee Kids”) offers unsolicited windshield cleaning services on U.S. Route 40 just west of downtown Baltimore, Maryland on July 28, 2022. The squeegee crews have been in the news lately after a violent incident in Baltimore. (Photo by Michael S. Williamson/The Washington Post) 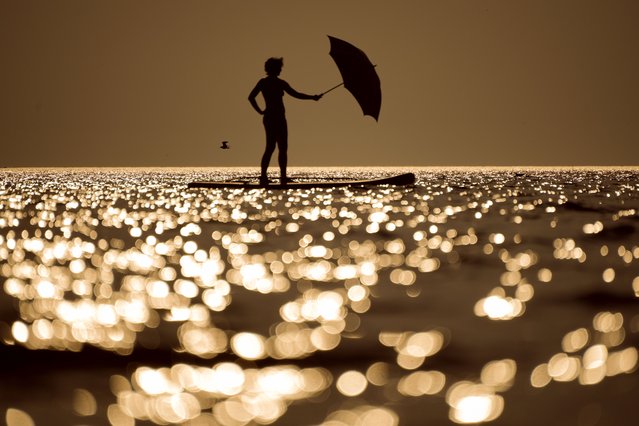 A woman steers her stand-up paddle board using an umbrella as a sail at Ladoga lake near the city of Olonets, 300 kilometers (186 miles) north-east of St. Petersburg, Russia, Friday, July 22, 2022. (Photo by Dmitri Lovetsky/AP Photo) 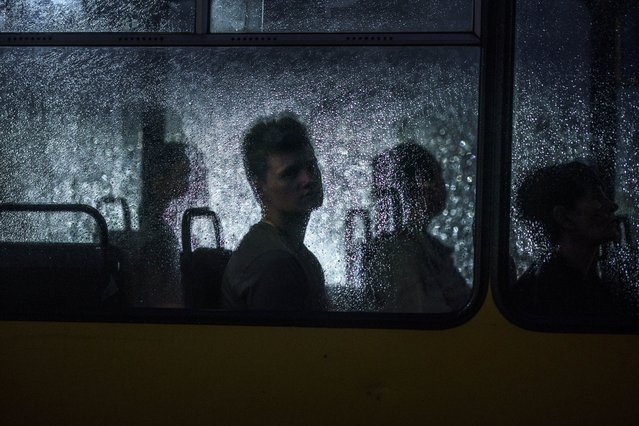 A passenger looks out of a city bus window during a rain shower in Dnipro, Ukraine, Monday, August 1, 2022. (Photo by David Goldman/AP Photo) 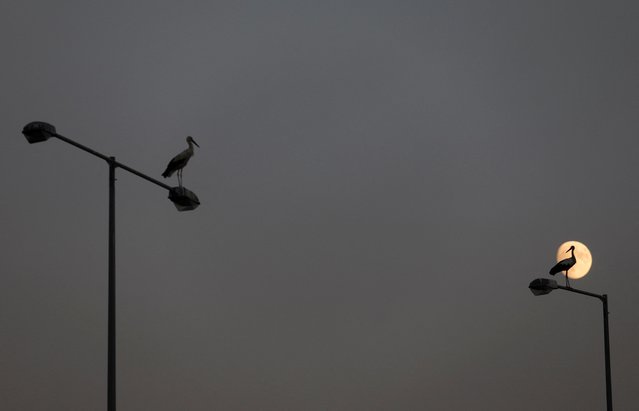 Storks stand on lamp posts as a moon rises on Egnatia motorway near Xanthi, Greece on August 9, 2022. (Photo by Yiannis Kourtoglou/Reuters) 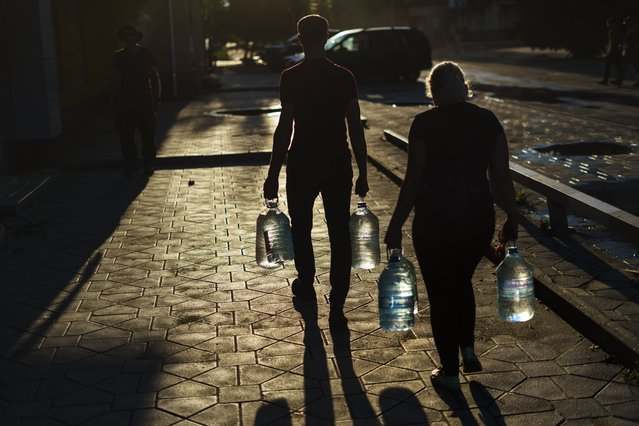 A couple carry water bottles after filling them up in a store in Pokrovsk, Donetsk region, eastern Ukraine, Thursday, August 4, 2022. (Photo by David Goldman/AP Photo) 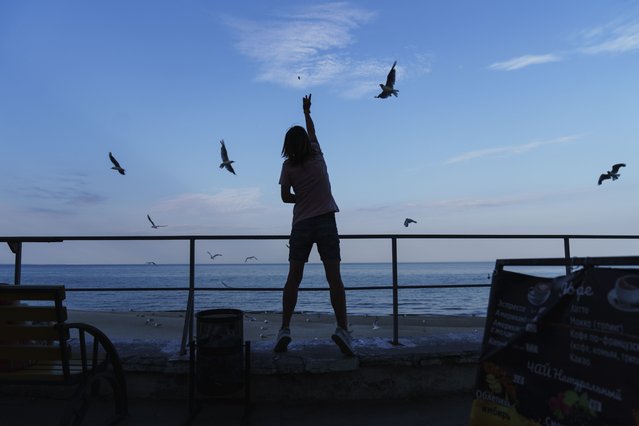 A woman feeds the birds along the Black Sea in Odesa, Ukraine, Friday, July 29, 2022. (Photo by David Goldman/AP Photo) 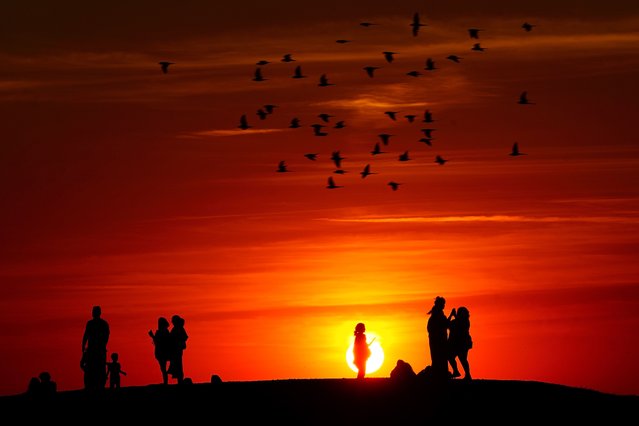 Groups of people watch the sun go down from a hill in Ealing, west London on Tuesday, August 9, 2022, as a summer of hosepipe bans and fire warnings continues, with a heat health alert coming into place across much of the country. (Photo by Victoria Jones/PA Images via Getty Images) 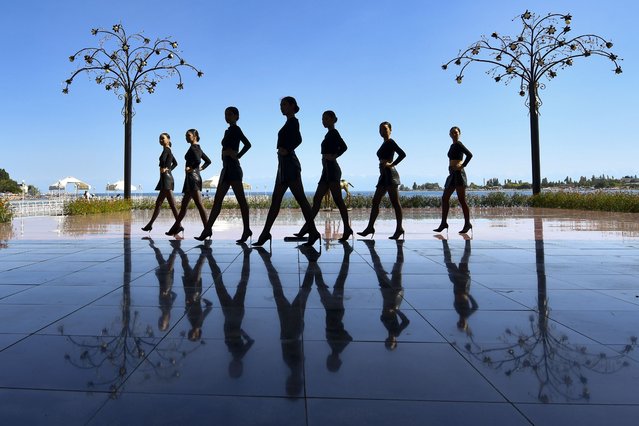 Members of the Russian Folk Dance Ensemble of Adygea perform during the World Nomads Fashion festival Issyk-Kul 2022, at Cholpon-Ata, a resort town on the northern shore of Lake Issyk-Kul, 207 kilometers (129 miles) east of Bishkek, Kyrgyzstan, Friday, July 22, 2022. On the shore of one of the world's largest lakes, high up in Kyrgyzstan's Tian Shan mountains, models strutted and sashayed in outfits mixing the ancient and modern at the World Nomads Fashion festival. (Photo by Vladimir Voronin/AP Photo) 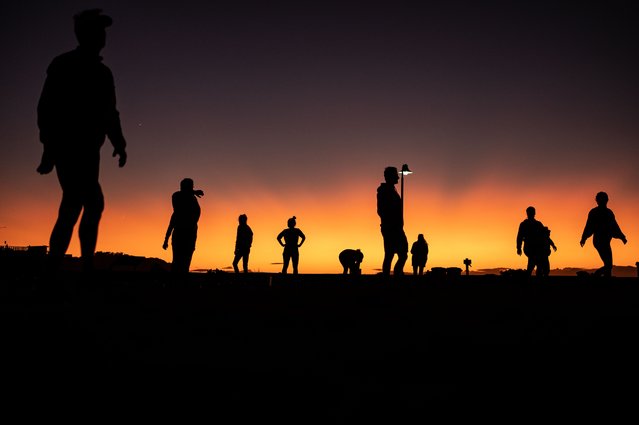 Members of the public are seen at sunrise in Bronte, Sydney, Tuesday, July 26, 2022. (Photo by Flavio Brancaleone/AAP Image via PA Images) 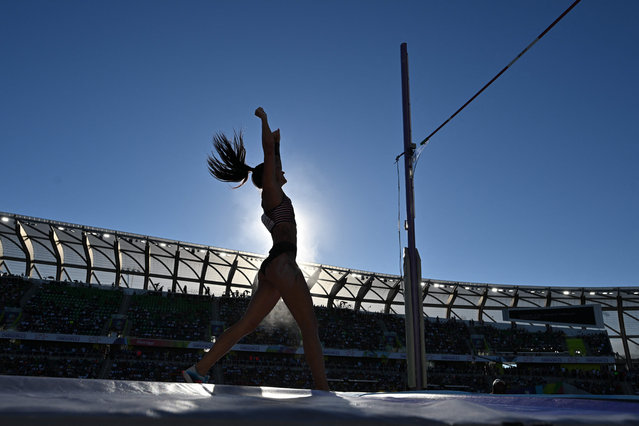 Canada's Anicka Newell reacts as she competes in the women's pole vault qualification during the World Athletics Championships at Hayward Field in Eugene, Oregon on July 15, 2022. (Photo by Andrej Isakovic/AFP Photo) 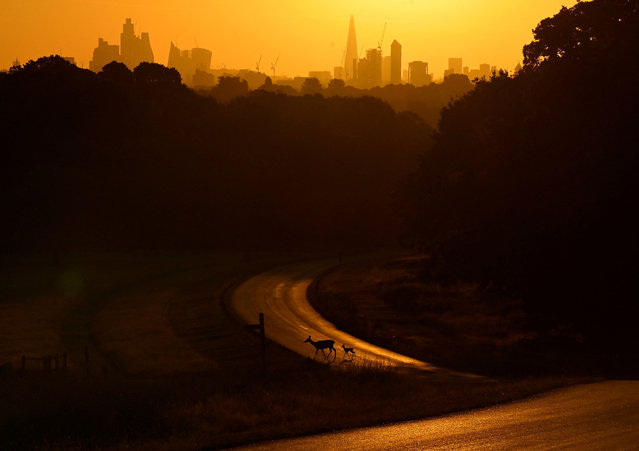 A deer and its fawn cross a road shortly after sunrise, with the London skyline seen behind, as a second heatwave is predicted for parts of the country, Richmond Park, London, Britain on August 8, 2022. (Photo by Toby Melville/Reuters) 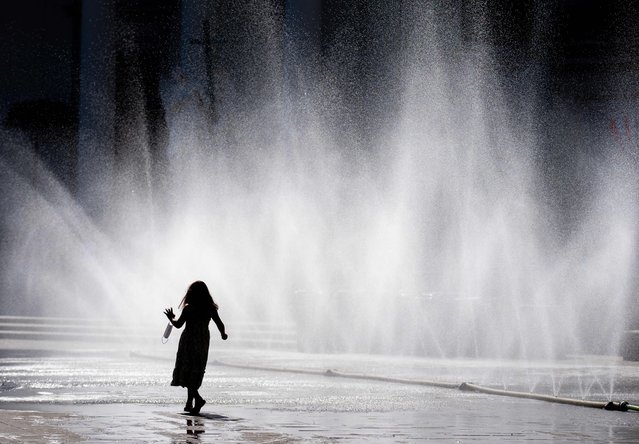 A girl refreshes in spray mist coming out of a hose at Karlsplatz Charles Square in Vienna, Austria, where the current heat wave was expected to reach a peak on August 5, 2022. (Photo by Georg Hochmuth/APA via AFP Photo) 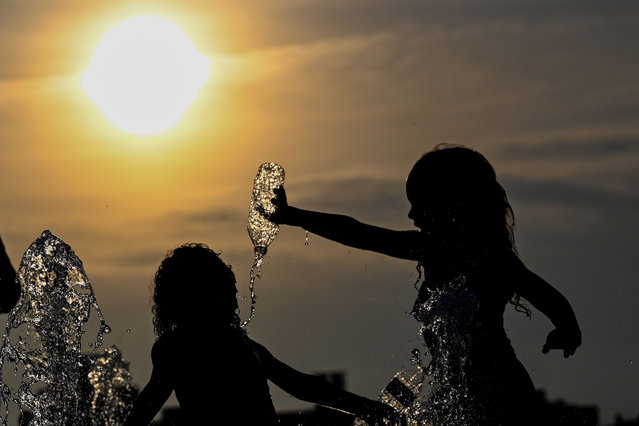 Children cool off by playing in a fountain in Domino Park, Brooklyn with the Manhattan skyline in the background as the sun sets during a heat wave on July 24, 2022 in the Brooklyn borough of New York City. The five boroughs of New York City are under a heat advisory until 8 PM on July 24th according to the US National Weather Service. Much of the East Coast is experiencing higher than usual temperatures as a heat wave moves through the area forcing residents into parks, pools and beaches to escape the heat. (Photo by Alexi Rosenfeld/Getty Images) 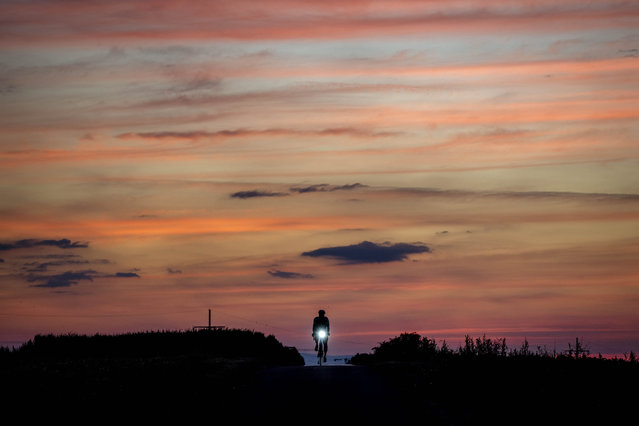 A man cycles along a small road in the outskirts of Frankfurt, Germany, Tuesday, August 2, 2022. (Photo by Michael Probst/AP Photo) 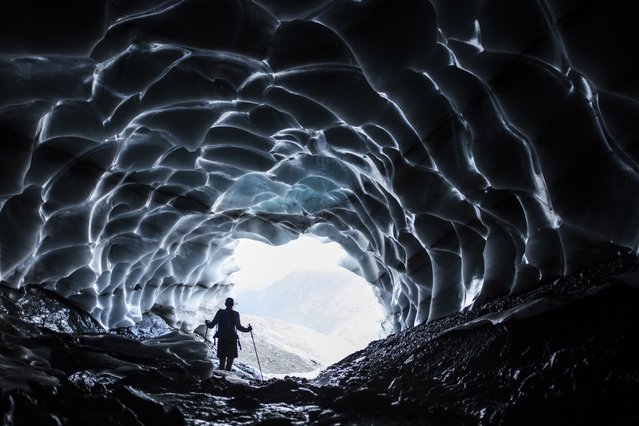