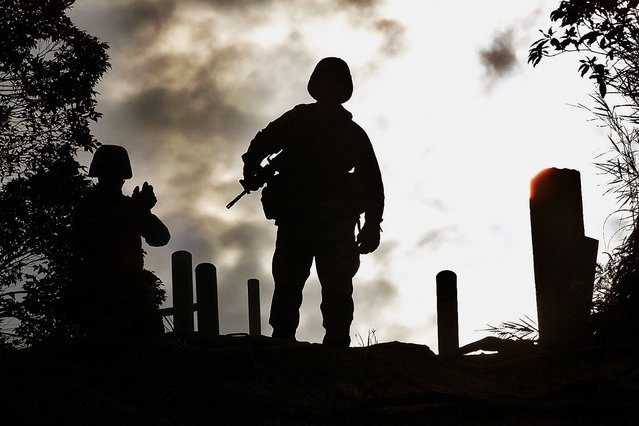 U.S. Marine Corps Sgt. Mike Anglen of Turner, Ore., center, stands atop a cliff as Sgt. Bryan Wallace of Pikin, Ill., waits for his turn before their rappelling exercise at Jungle Warfare Training Center in Camp Gonsalves, northern Okinawa, Japan, on February 8, 2002. Okinawa on Sunday, May 15, 2022, marks the 50th anniversary of its return to Japan on May 15, 1972, which ended 27 years of U.S. rule after one of the bloodiest battles of World War II was fought on the southern Japanese island. (Photo by Junji Kurokawa/AP Photo/File) 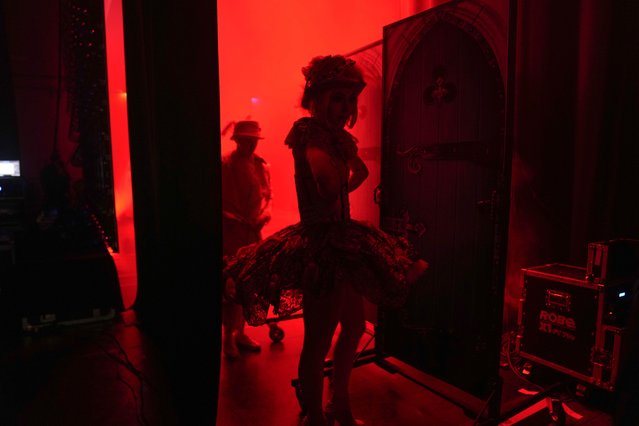 A performer leaves the stage during the show “Alice in Wonderland” in Pistoia, Italy, Friday, May 6, 2022. A Ukrainian circus troupe is performing a never-ending “Alice in Wonderland” tour of Italy. They are caught in the real-world rabbit hole of having to create joyful performances on stage while their families at home are living through war. The tour of the Theatre Circus Elysium of Kyiv was originally scheduled to end in mid-March. (Photo by Alessandra Tarantino/AP Photo) 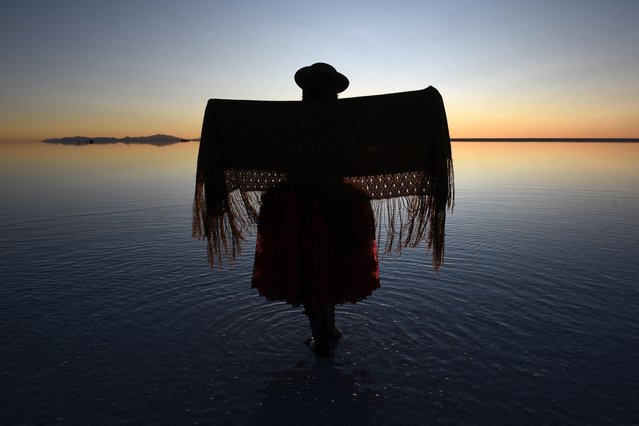 A woman in a Cholita dress poses for photos, at the Uyuni Salt Flat in Bolivia on March 26, 2022. (Photo by Claudia Morales/Reuters) 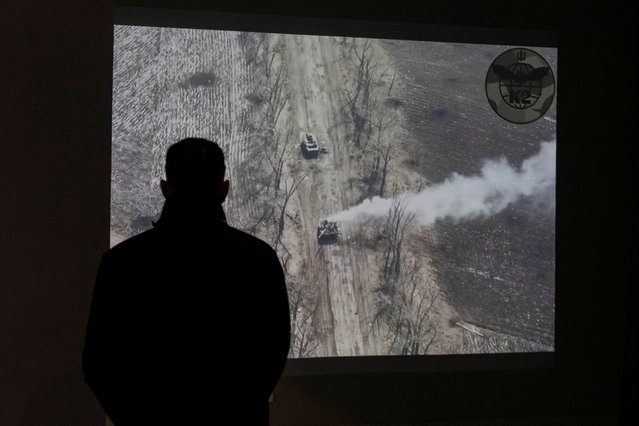 A man watches a drone video of an attack to a Russian tank at an exhibition of the ongoing Russian invasion of Ukraine, in the National Museum of the History of Ukraine in the Second World War, as Russia celebrates Victory Day marking the 77th anniversary of the victory over Nazi Germany in World War Two, in Kyiv, Ukraine on May 9, 2022. (Photo by Carlos Barria/Reuters) 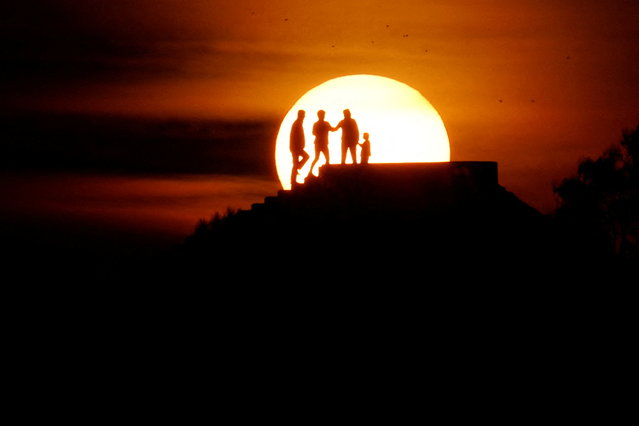 People enjoy the sunset in Vlora, Albania, May 4, 2022. (Photo by Florion Goga/Reuters) 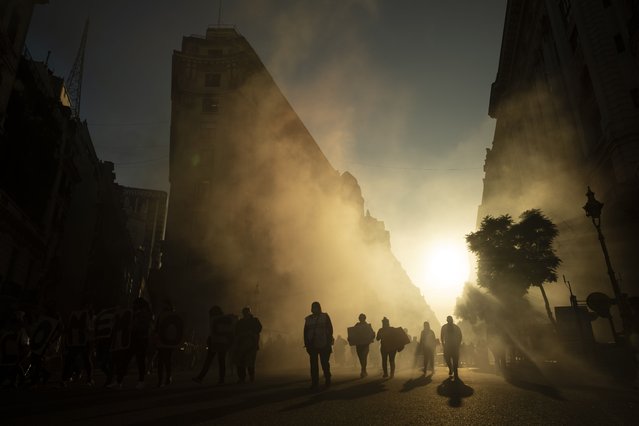 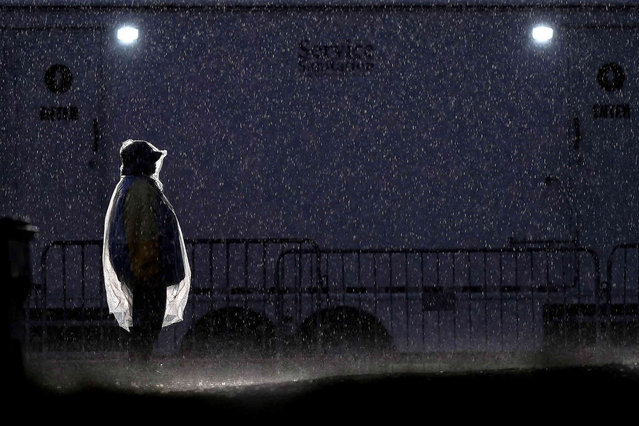 A security worker stands in the rain in the barn area of Churchill Downs during workouts Tuesday, May 3, 2022, in Louisville, Ky. The 148th running of the Kentucky Derby is scheduled for Saturday, May 7. (Photo by Charlie Riedel/AP Photo) 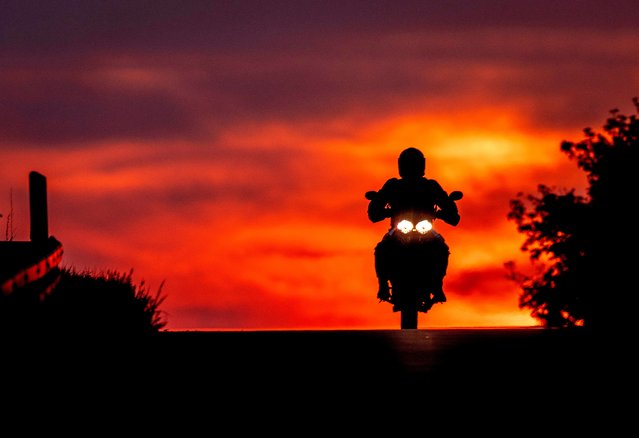 A man rides his bike over a hill on the outskirts of Frankfurt, Germany, as the sun rises on Friday, April 29, 2022. (Photo by Michael Probst/AP Photo) 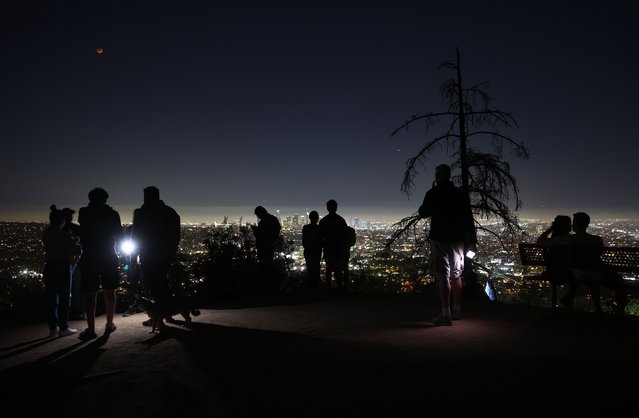 People take in the view from Griffith Park while a total lunar eclipse creates a “super blood moon” on May 15, 2022 in Los Angeles, California. The eclipse coincided with a super moon which occurs when the moon is at its closest point to earth. (Photo by Mario Tama/Getty Images) 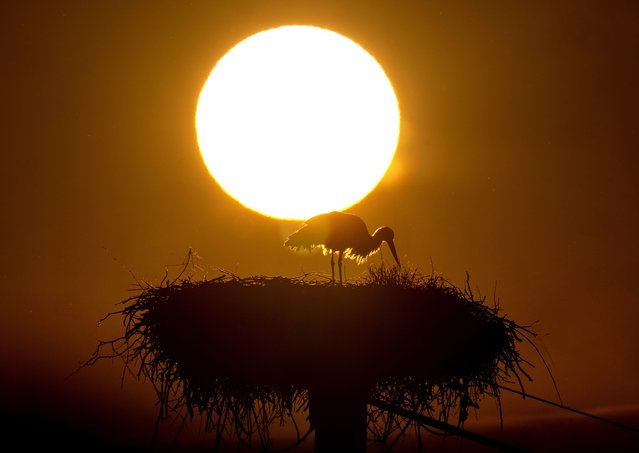 A stork stands in its nest on the outskirts of Frankfurt, Germany, as the sun rises on Friday, May 13, 2022. (Photo by Michael Probst/AP Photo) 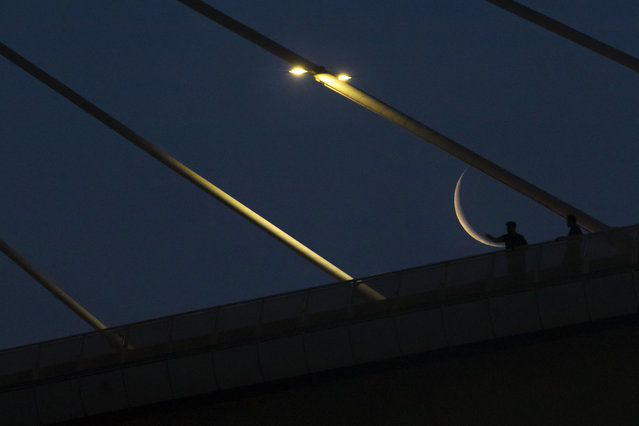 The waning crescent moon, near the end of the Muslim holy month of Ramadan, is pictured behind the Mohammad Baqir al-Sadr bridge in Iraq's southern city of Basra early on April 28, 2022. (Photo by Hussein Faleh/AFP Photo) 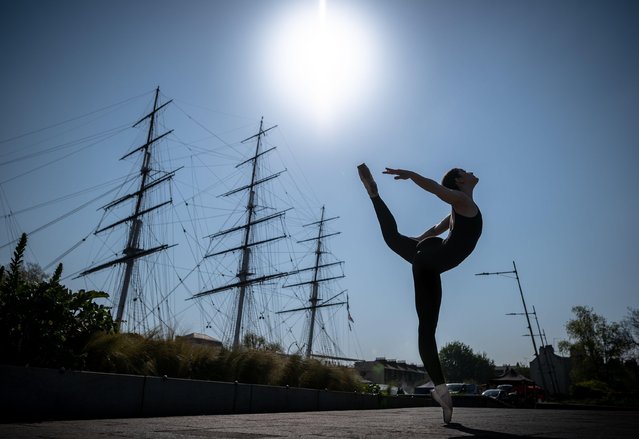 Elizabeth Nicolaou, a final year student with the Royal Academy of Dance, strikes a pose on April 28, 2022 near the Cutty Sark ship in Greenwich, London ahead of International Dance Day. First celebrated in 1982, International Dance Day has taken place every year since in anniversary celebration of the birth of Jean-Georges Noverre (1727-1810), considered the creator of modern ballet. (Photo by Guy Corbishley/Alamy Live News) 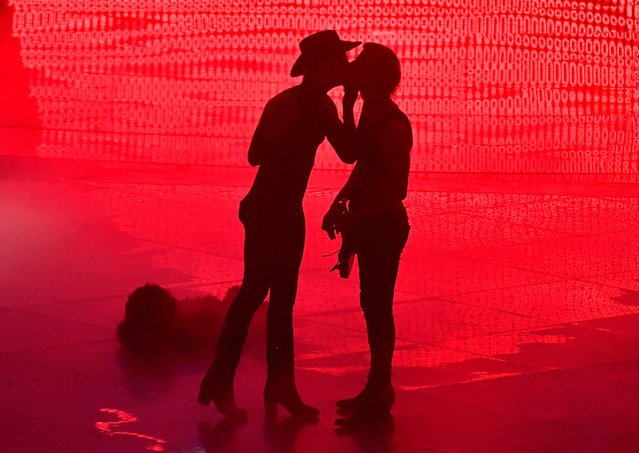 Achille Lauro and Boss Domsperform on stage during the second semi-final of the 66th Eurovision Song Contest at Pala Alpitour on May 12, 2022 in Turin, Italy. (Photo by Filippo Alfero/Getty Images) 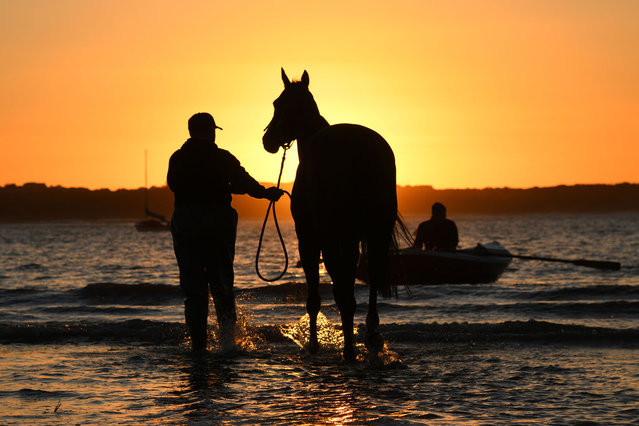 General view of Matthew Williams racing during a trackwork session at Lady Bay beach on May 03, 2022 in Warrnambool, Australia. (Photo by Vince Caligiuri/Getty Images) 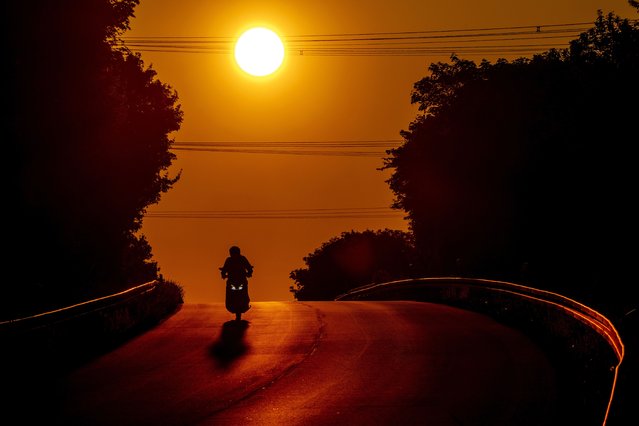