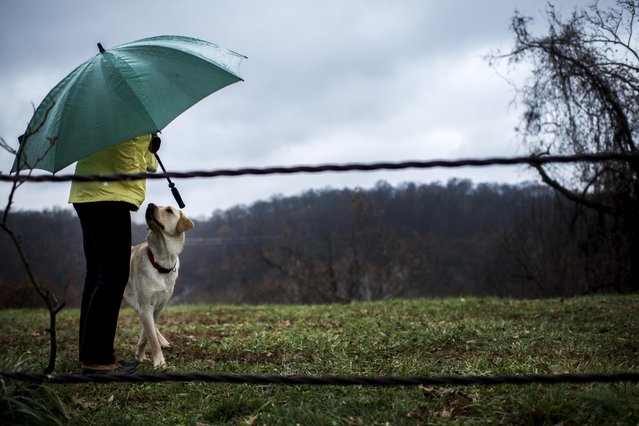 On a rainy morning in the Palisades neighborhood, Labrador, Ricky Bobby, walks over to his owner, Katie Malone, while playing tug of war on a park path in Washington, DC, Tuesday, December 2, 2014. (Photo by Melina Mara/The Washington Post) 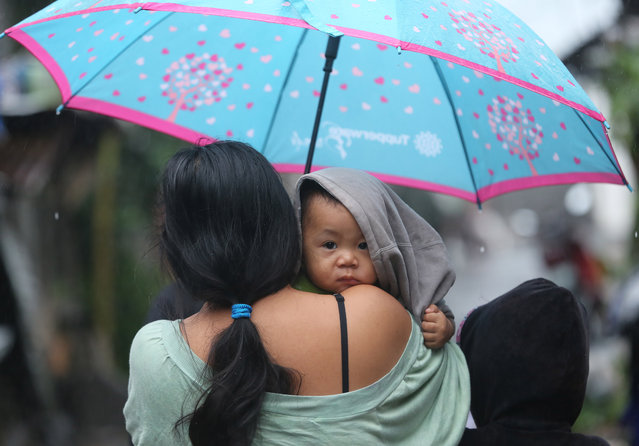 A young Filipino boy is carried by his mother as they return to their homes in Legazpi, Albay province, eastern Philippines on Monday, December 8, 2014 after strong waves from Typhoon Hagupit battered their coastal village last night. Typhoon Hagupit weakened into a tropical storm Monday after leaving at least 21 people dead and forcing more than a million people into shelters. But it spared most of a central Philippine region still reeling from last year's monster Typhoon Haiyan that left thousands dead. (Photo by Aaron Favila/AP Photo) 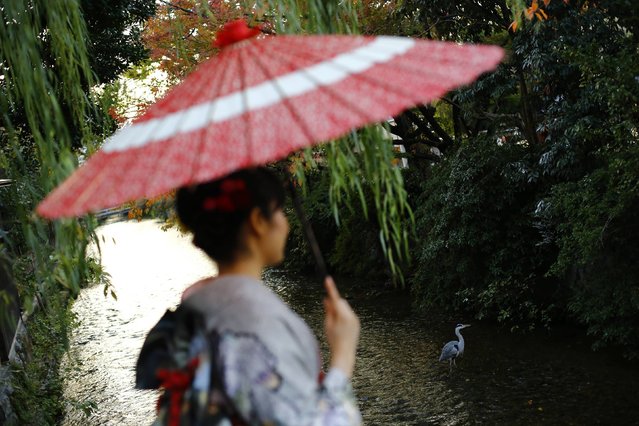 A woman, dressed in a traditional Japanese kimono, holds a parasol as she looks at a water bird while crossing a bridge in Kyoto, western Japan November 19, 2014. (Photo by Thomas Peter/Reuters) 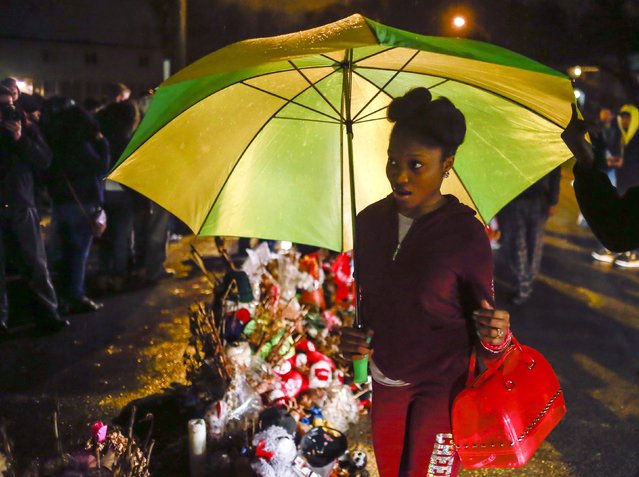 Ferguson resident Churnae Allred, 15, holds an umbrella to guard against the rain as she joins dozens who gathered to pay homage to Michael Brown at the site where he was shot and killed in Ferguson, Missouri November 22, 2014. An uneasy quiet settled over Ferguson, Missouri, on Saturday evening after another day without a decision from a grand jury on whether to bring charges against a white police officer for fatally shooting the black teen. (Photo by Adrees Latif/Reuters) 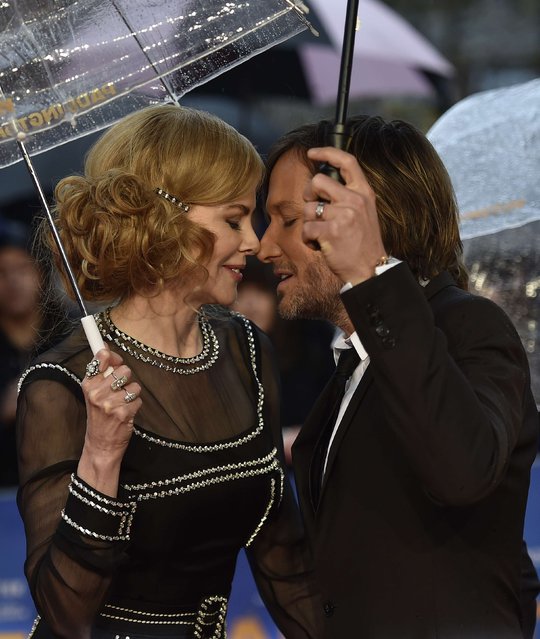 Australian actress Nicole Kidman (L) and her husband, musician Keith Urban embrace as they arrive for the world film premiere of “Paddington” at Leicester Square in central London, November 23, 2014. (Photo by Toby Melville/Reuters) 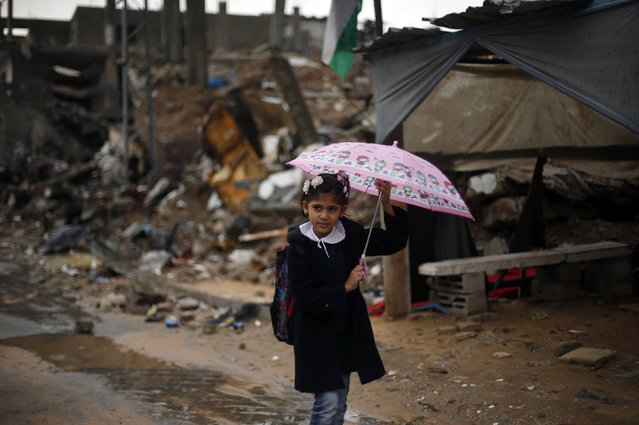 A Palestinian school girl holds an umbrella as she walks near the ruins of houses that witnesses said were destroyed by Israeli shelling during the most recent conflict between Israel and Hamas, on a rainy day in the east of Gaza City November 24, 2014. (Photo by Suhaib Salem/Reuters) 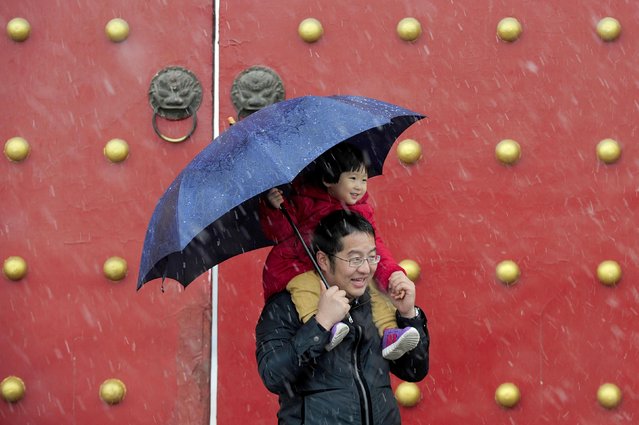 A girl sits on the shoulder of a man as they hold an umbrella to shield against the first snowfall of this winter in Shenyang, Liaoning province November 30, 2014. (Photo by Reuters/Stringer) 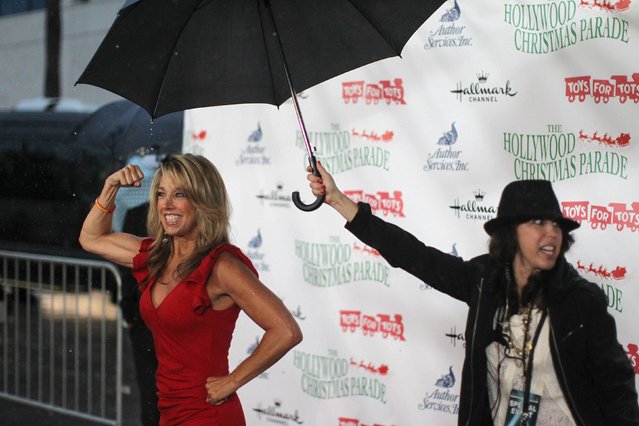 Fitness instructor and author Denise Austin arrives in the rain to the 83rd Annual Hollywood Christmas Parade in the Hollywood section of Los Angeles, California November 30, 2014. (Photo by David McNew/Reuters) 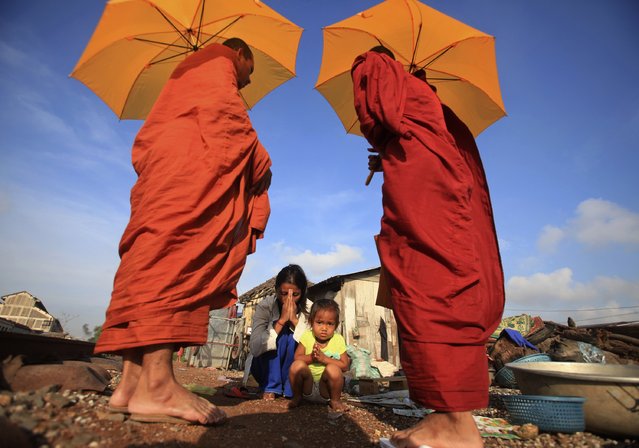 A woman and her daughter pray after offering alms to Buddhist monks near a railway track in Phnom Penh December 2, 2014. (Photo by Samrang Pring/Reuters) 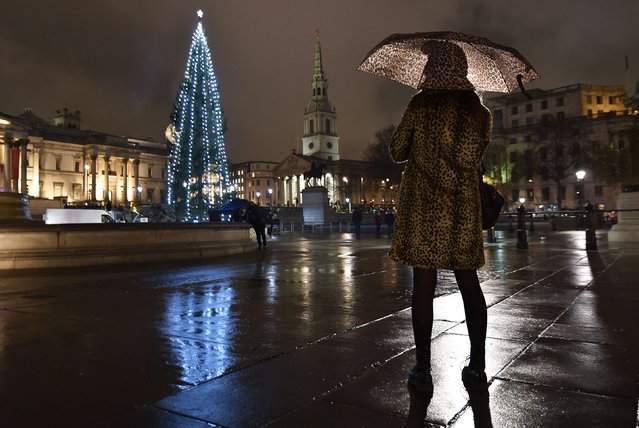 A woman photographs a Norwegian spruce Christmas tree from Oslo after it was lit at Trafalgar Square in central London, December 4, 2014. (Photo by Toby Melville/Reuters) 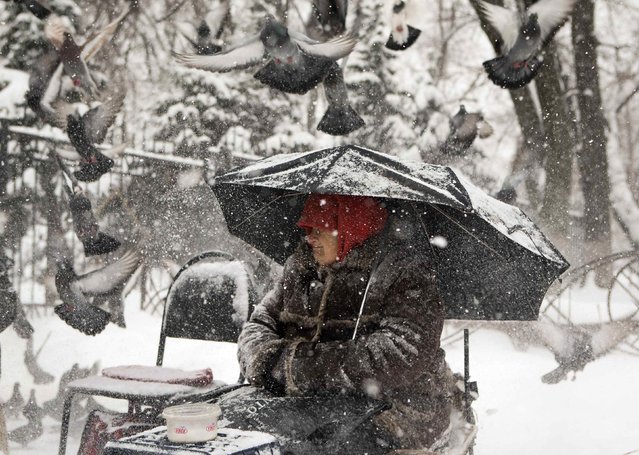 Pigeons fly past a woman begging as it snows in Almaty December 7, 2014. (Photo by Shamil Zhumatov/Reuters) 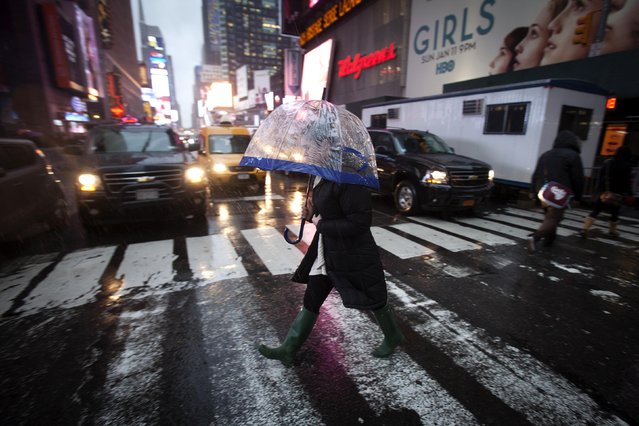 A woman crosses a street in Times Square under the pouring rain, in New York December 9, 2014. (Photo by Carlo Allegri/Reuters) 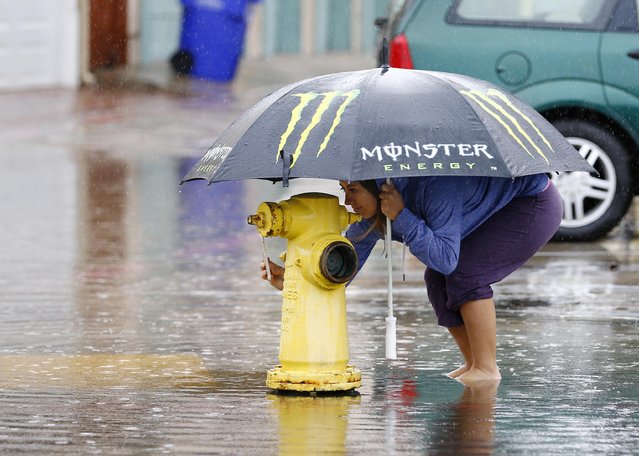 A woman takes a picture with her phone along a street in Mission Beach as a winter storm brings rain and high winds to San Diego, California December 12, 2014. A major storm that pummeled northern California and the Pacific Northwest with heavy rain and high winds and killed two people moved south overnight, prompting evacuation orders in areas prone to floods and mud flows. The National Weather Service forecast the system to track through southwestern California late on Thursday and into Friday, bringing the possibility of strong thunderstorms, as well as waterspouts and small tornadoes along the coast. (Photo by Mike Blake/Reuters) 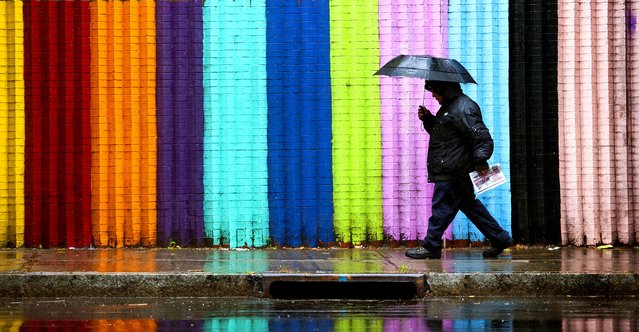 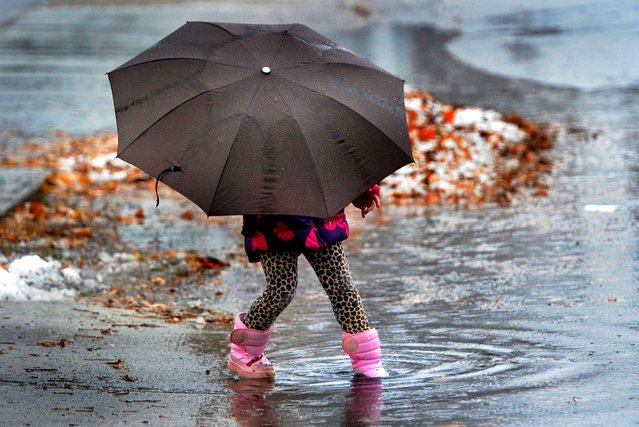 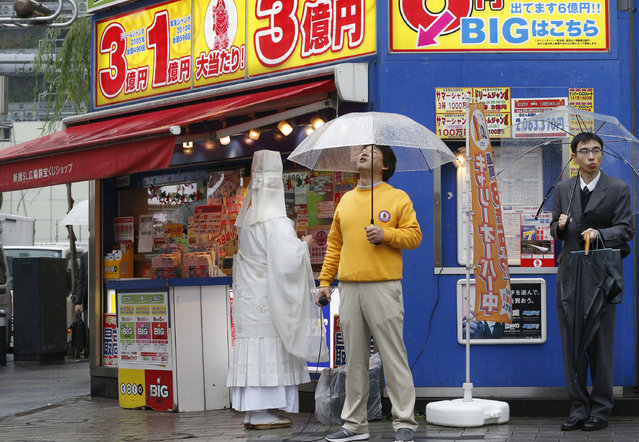 A monk chants a Buddhist mantra in front of a public lottery counter in Tokyo, Tuesday, November 25, 2014. Lottery stand owners hire monks to conduct ritual purification on their stands for a big win. (Photo by Shizuo Kambayashi/AP Photo) 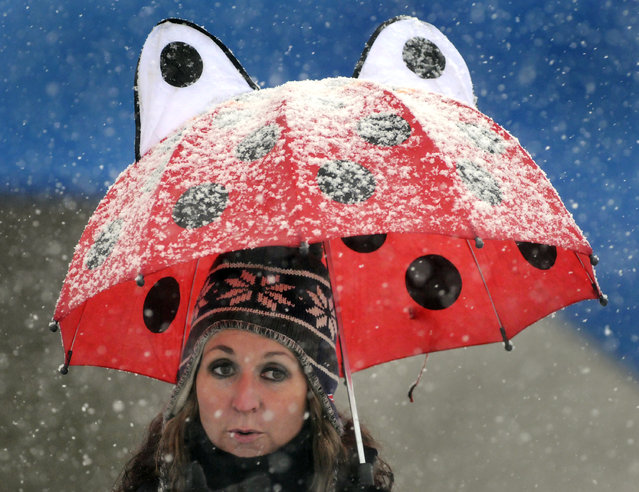 Kellie Shea of Worcester, Mass. uses an umbrella to take shelter from the heavy wet snow while watching the Doherty vs. Burncoat Thanksgiving Day football game at Foley Stadium in Worcester on Wednesday, November 26, 2014. The football game was rescheduled because of the snow storm. (Photo by Paul Kapteyn/AP Photo/Worcester Telegram & Gazette) 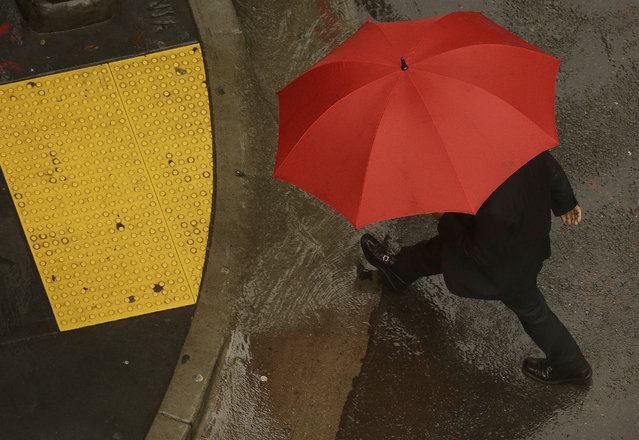