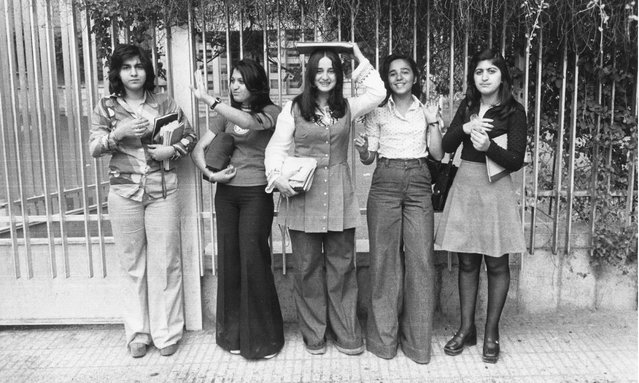 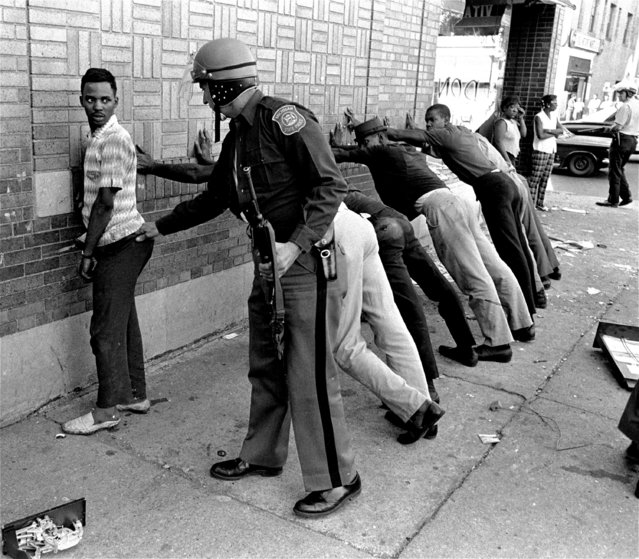 In this July 24, 1967 file photo, a Michigan State police officer searches a youth on Detroit's 12th Street where looting was still in progress after the previous day's rioting. The July 23, 1967 raid of an illegal after-hour’s club, though, was just the spark. Many in the community blamed frustrations blacks felt toward the mostly white police, and city policies that pushed families into aging and over-crowded neighborhoods. (Photo by AP Photo) 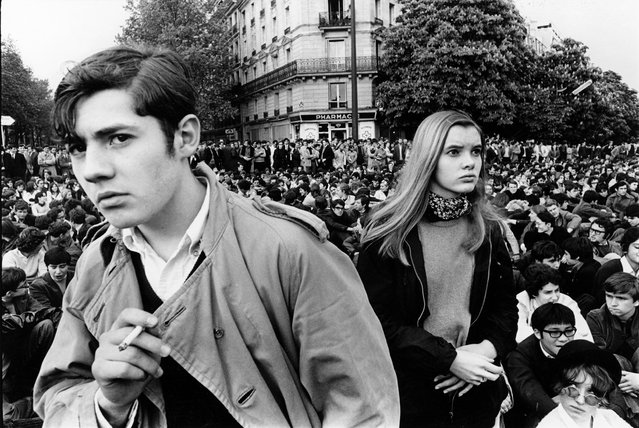 Student demonstrations in Paris, on April 11, 1968. The protests of 1968 comprised a worldwide escalation of social conflicts, predominantly characterized by popular rebellions against military and bureaucratic elites, who responded with an escalation of political repression. The most spectacular manifestation of this in European countries were the May 1968 protests in France, in which students linked up with wildcat strikes of up to ten million workers, and for a few days the movement seemed capable of overthrowing the government. (Photo by David Newell-Smith/GNM Archive/The Observer/The Guardian) 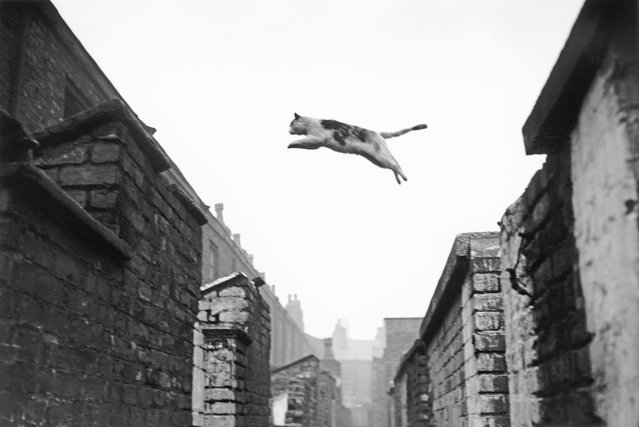 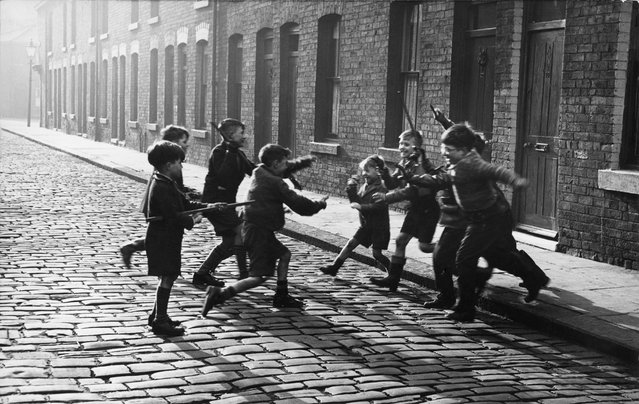 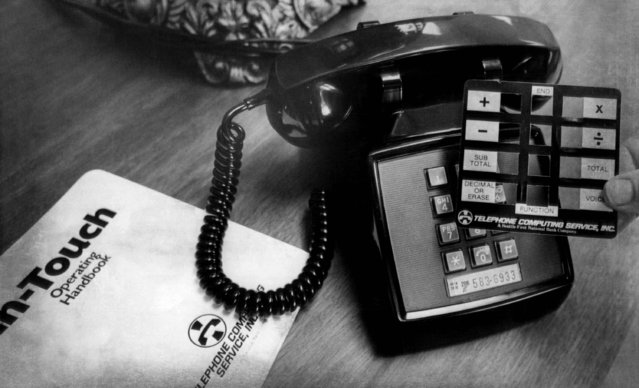 A Seattle bank is offering its customers personal computer services at the touch of a telephone, including bill paying, calculating, family budgeting and income tax data storage in Seattle, Washington, June 1, 1973. The service, called “in-touch”, is the first of its kind in the motion. The service costs $6.50 a month. A touch-tone phone is used to connect the customer to a “talking” computer. (Photo by Barry Sweet/AP Photo) 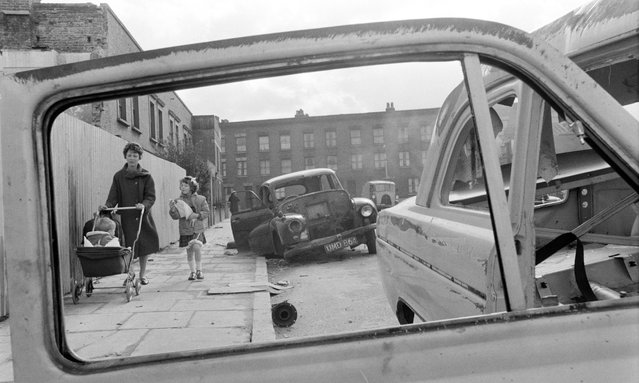 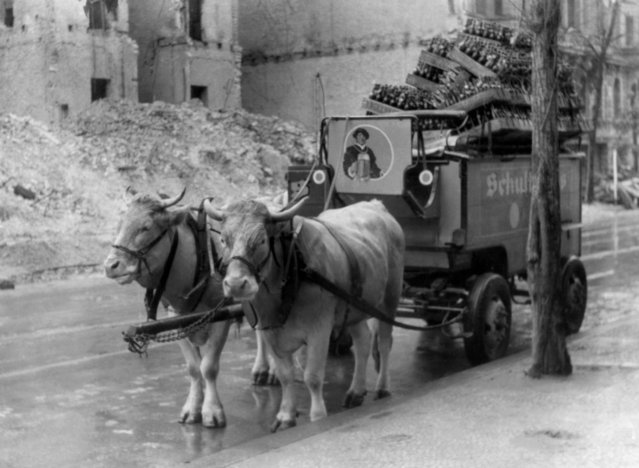 A team of oxen are used to draw a beer wagon through the streets of Berlin on July 31, 1945, to help overcome transportation difficulties in the German capital arising from Allied air raids on the city before it fell. (Photo by AP Photo) 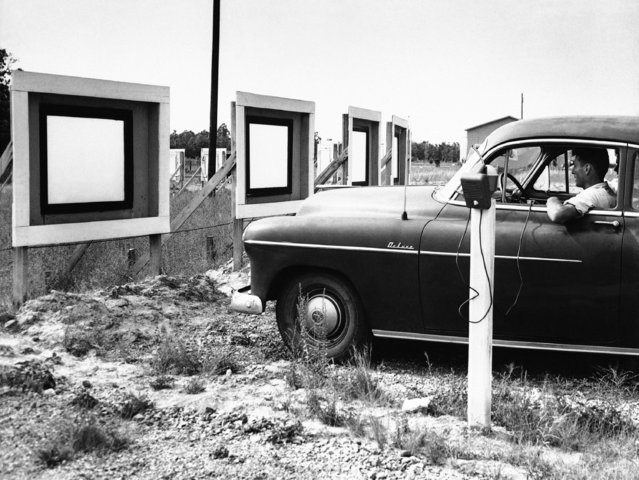 Tom Smith, Urbana, mo., inventor, demonstrates how customers see movies on separate screens in his new Multiscope Drive-in Theater at Urbana, Missouri on August 2, 1953. The layout is in shape of wheel with projection booth in center. Image is flashed to rear of screens. Smith wont tell how projector directs image on separate beans to individual screens, but say eventually system will have screens for 150-200 cars. Advantages of new system, Smith says, are clearer images and each customers has an equally good view. (Photo by AP Photo) 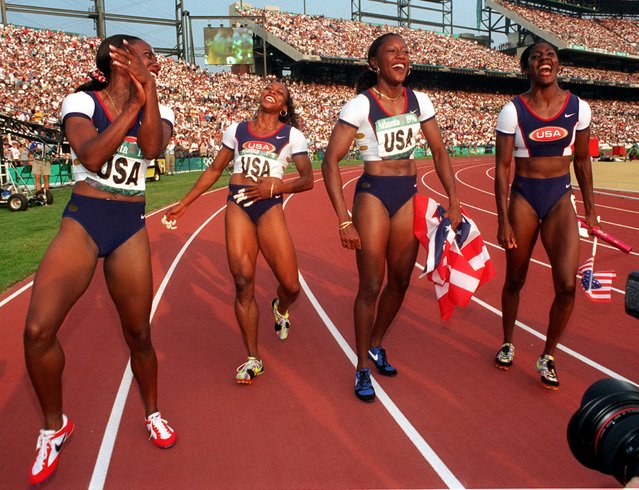 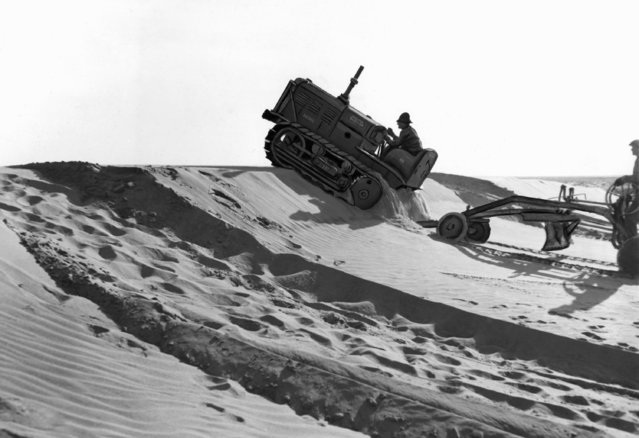 If the conservationist had to depend upon enough horses to equal the horsepower of this tractor for pulling heavy instruments, cutting furrows and leveling dunes, his feed bill alone would be tremendous. But this mechanical hitch does the work very nicely on this project near Dalhart, Texas, April 18, 1937. Furrows are cut, and the wind is expected to undo some of its damage by blowing top soil from the dunes back across the fields. (Photo by AP Photo) 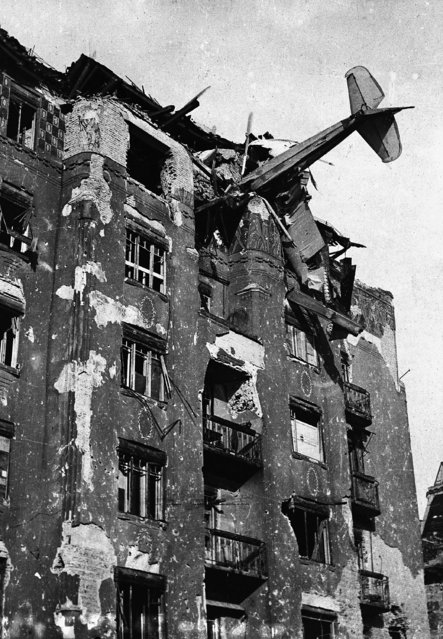 A German glider hangs from the top story of bombed-scarred apartment building in Budapest, Hungary, on July 6, 1945. Following the three month siege, which ended in the rout of the German and Hungarian armies, many damaged parts of the attractive city of Budapest are being seen for the first time. (Photo by AP Photo) 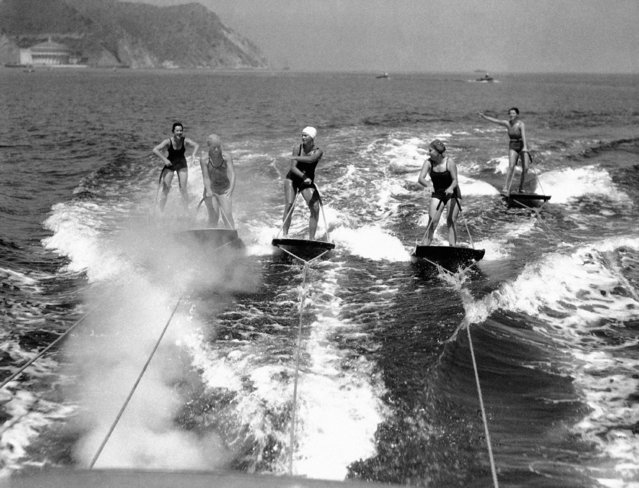 Five graceful water nymphs poised on their aquaplane boards as they flash through the water at about fifty miles an hour in one of the preliminary races in the Annual Aquaplane Championships off Catalina Island, California, July 11, 1934. (Photo by AP Photo) 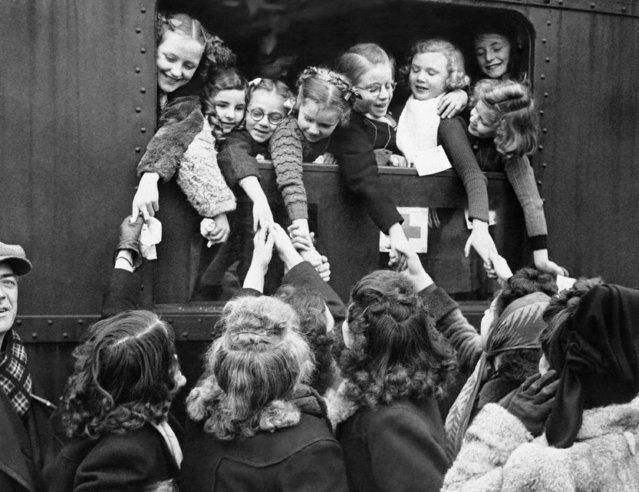 The first party of Belgian children are seen off by their parents at Brussels when they leave for a three months? recuperation period in Switzerland, July 15, 1945. They are being sent to recover from the effects of undernourishment and bombing during the enemy occupation, by the Belgian Red Cross. (Photo by AP Photo) 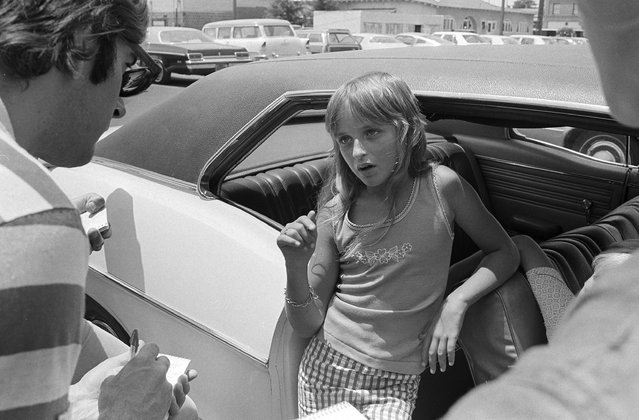 Darla Daniels, 10, of Chowchilla relays the ordeal to reporters at police headquarters in Chowchilla, Calif., July 17, 1976. The 26 school children and their bus driver were returned safely early Saturday from Livermore where they were found unharmed. (Photo by AP Photo) 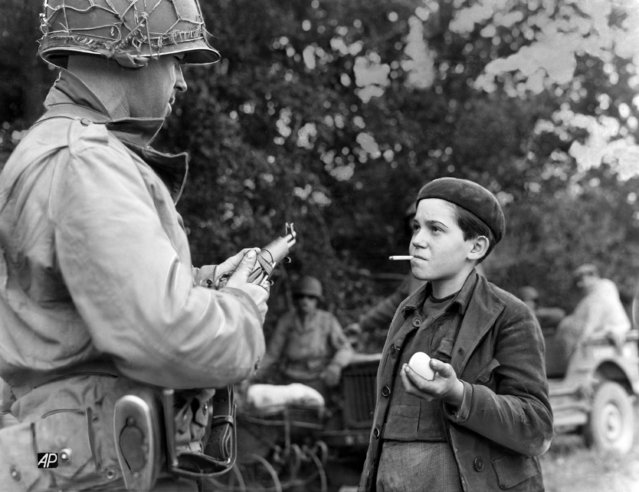 Pfc. Remy Bouchard swaps a cigarette for an egg with a French Orphan near La Haye Du Puits, France on July 18, 1944, which was captured by American forces. The boy is only twelve years old. (Photo by Hugh Broderick/AP Photo) 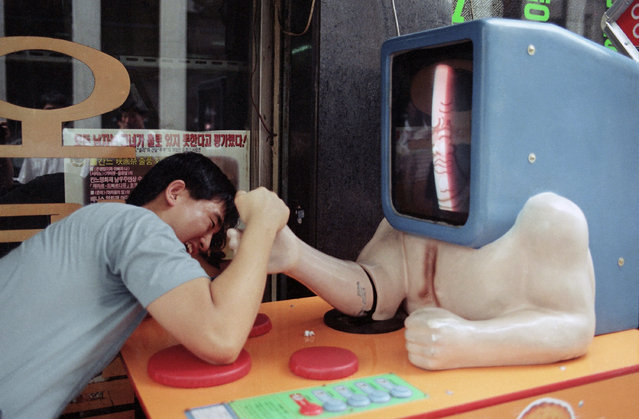 A youth uses his right arm measures to his strength against an electronic robot on a street in downtown Seoul on Thursday, July 19, 1991. (Photo by Yun Jai-Hyung/AP Photo) 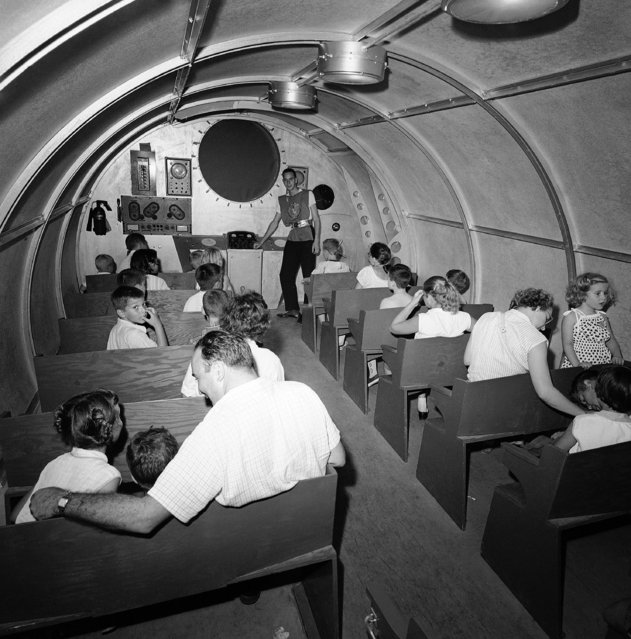 The youngsters are seated inside the 76-foot rocket at Spaceland in Garden City, New York, July 21, 1958 as Bill Jaker, as Captain Demos, gets ready to blast off. The rocket is equipped with space instrument controls and an “outer space” viewing screen. (Photo by Carl Nesensohn/AP Photo) 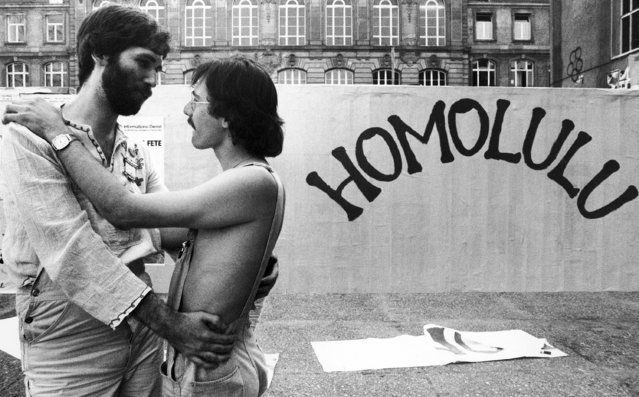 Two unidentified gay men embrace next to a banner reading “Homolulu” during a homosexual meeting at the campus of the Johann Wolfgang Goethe University in Frankfurt, Germany on July 26, 1979. The organizers are expecting more then 3.000 participants from Europe and prepare for a demonstration through the city. (Photo by Rolf Boehm/AP Photo) 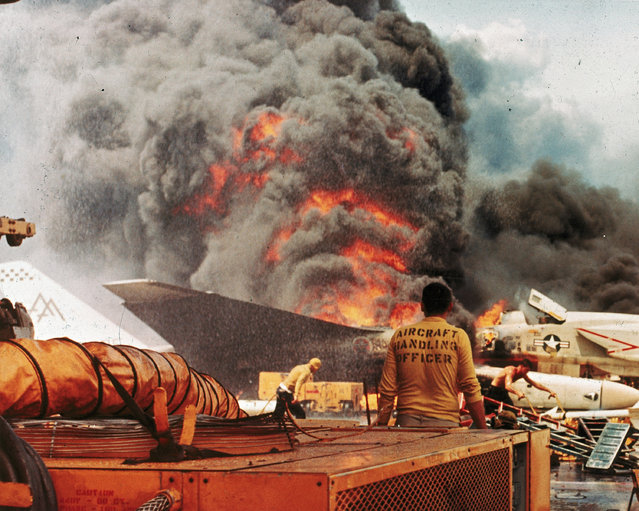 Navy crewmen try to put out a fire aboard the USS Forrestal in the Tonkin Gulf off the coast of Vietnam, July 29, 1967, after an F-4 Phantom accidentally fired a zuni rocket into an A-4 Skyhawk which caused massive explosions on the aft end of the flight deck. This tragic accidental launch damaged the aircraft and claimed the lives of 134 crewmen. (Photo by AP Photo)
Edit Del
04 Aug 2017 09:02:00, post received 0 comments
Publication archive:
←   →
Popular tags:
All tags
Last searches: