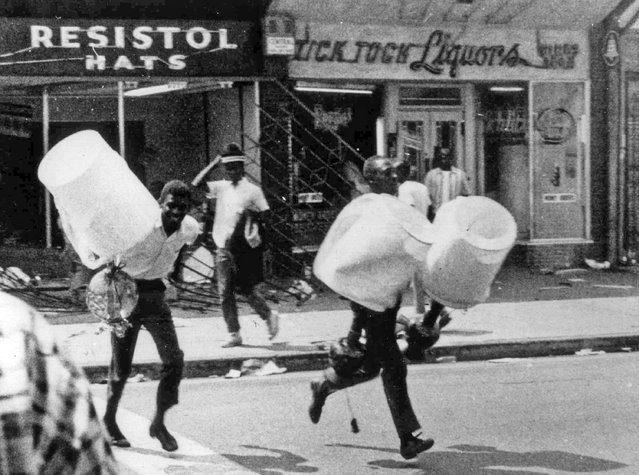 In this August 13, 1965 file photo, men carry items from a looted store during the rioting that enveloped the Watts district of Los Angeles. It began with a routine traffic stop 50 years ago this month, blossomed into a protest with the help of a rumor and escalated into the deadliest and most destructive riot Los Angeles had seen. The Watts riot broke out Aug. 11, 1965 and raged for most of a week. When the smoke cleared, 34 people were dead, more than a 1,000 were injured and some 600 buildings were damaged. (Photo by AP Photo) 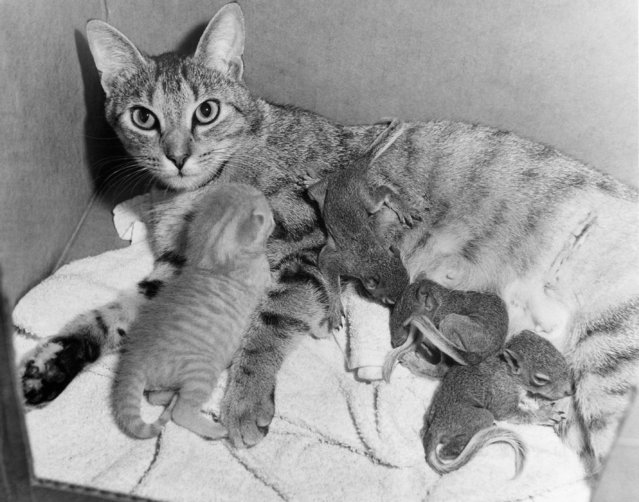 The three strangers crowd mother cat Krip's one remaining kitten out of position at dinner time in Ocala, Fla. on August 11, 1967. When Krip lost 5 of her kittens at birth she adopted some baby squirrels to fill the empty places. (Photo by Harold Valentine/AP Photo) 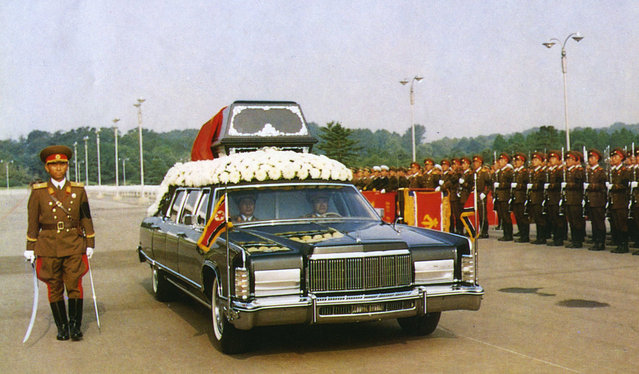 In this July 19,1994, file photo released by the Korean Central News Agency and distributed by the Korea News Service, the vehicle carrying the body of North Korean leader Kim Il Sung passes by the honor guard during his funeral in Pyongyang, North Korea. For nearly 70 years, the three generations of the Kim family have run North Korea with an absolute rule that tolerates no dissent. The ruling family has devoted much of the country's scarce resources to its military but has constantly feared Washington is intent on destroying the authoritarian government. (Photo by Korean Central News Agency/Korea News Service via AP Photo) 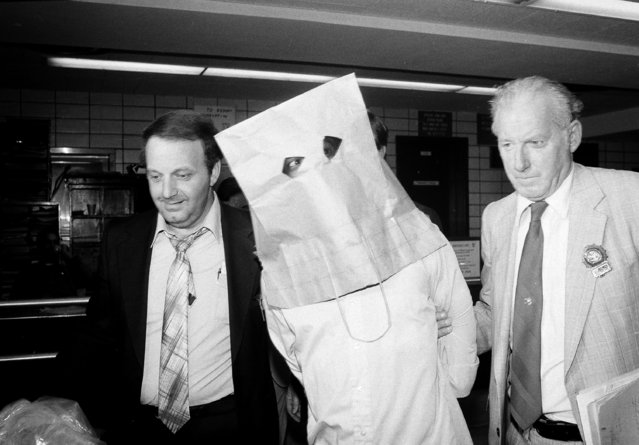 Charles Sears, wearing a bag over his head, is escorted out of the 13th Precinct in New York by detectives after his arrest, July 6, 1981.Sears was arrested in connection with the skid-row slashing deaths of two homeless men and the wounding of 13 others, according to detectives. (Photo by David Bookstaver/AP Photo) 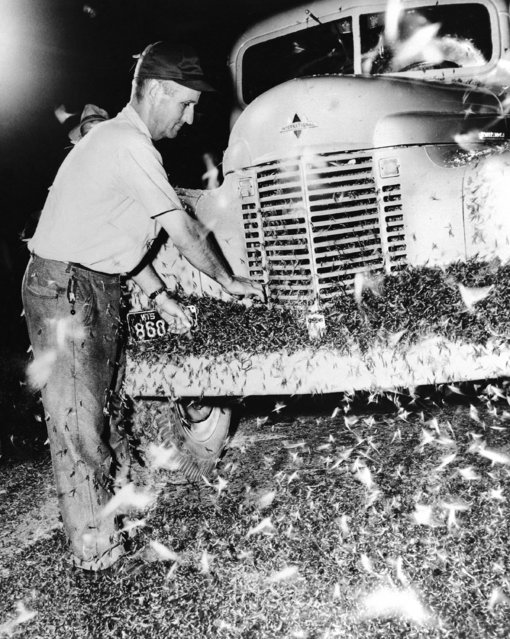 Lawrence Rutz stops his truck on the West Channel Bridge at LaCrosse, Wisconsin, July 8, 1946, to clear May flies from the front of his vehicle. Mayflies became so thick, they obstructed motorist's view, clogged radiators, and made roadway of bridge slippery. (Photo by AP Photo) 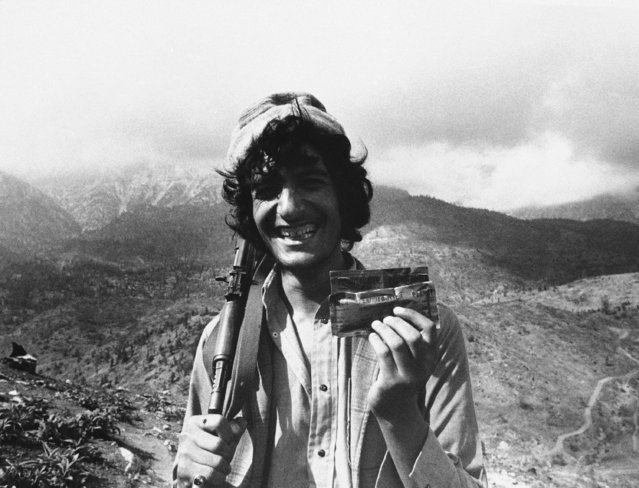 A Muslim guerrilla in Afghanistan's Paktia Province shows off his combat ration of peanut butter from the United States, July 11, 1986 in Afghanistan. Many of his fellow guerrillas battling the Soviet-backed Communist government don't like the American food and have been throwing it away. (Photo by Barry Renfrew/AP Photo) 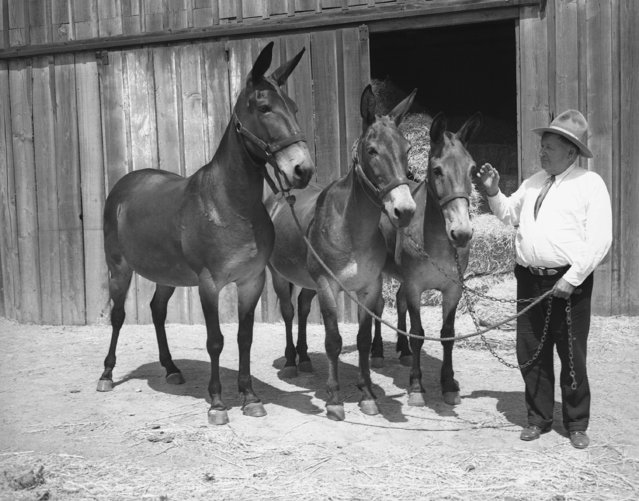 Walter Scott “Death Valley Scotty”, who shopped all over the state of California for five weeks and spent $4,500 for 15 mules, is with Barnum, his saddle mule, and two of his pack animals in Los Angeles on July 15, 1936. The other twelve mules are scattered throughout the state and will not be assembled until Scotty leaves for the desert. (Photo by Ira W. Guldner/AP Photo) 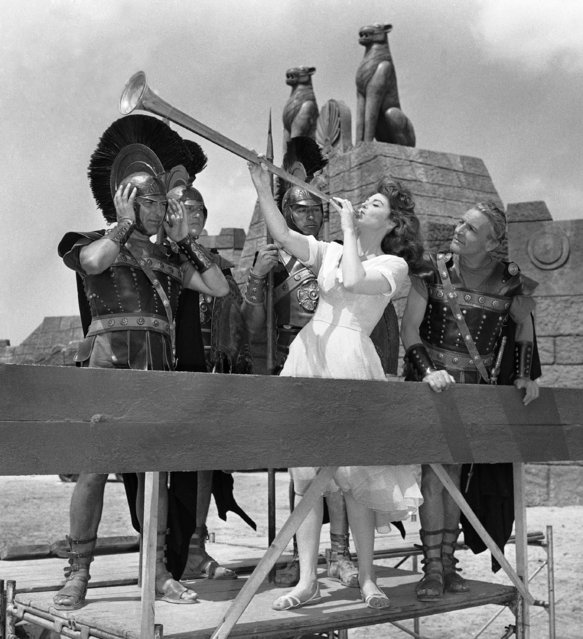 An up to date Sappho, Hollywood film star Tina Louise, makes like a trumpet blower on the set of “Sappho, Venus of Lesbos” in Rome, Italy, July 15, 1960. Actors in the parts of ancient soldiers play up to the off-camera bit. Tina plays the role of Sappho, the beautiful Greek poetess. (Photo by AP Photo) 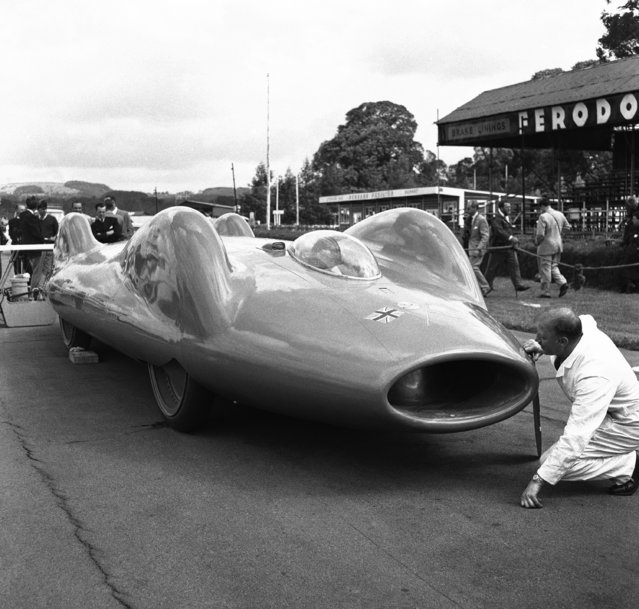 Leo Villa, Donald Campbell's Chief Mechanic, looks into the air intake of the jet powered car bluebird on the Goodwood Motor Racing Circuit in Sussex, England on July 18, 1960, where the new car is being prepared for trials, now scheduled for Thursday, July 21. After preliminary trials in Britain, the bluebird will be shipped to America for a world record attempt on the Bonneville Salt Flats in Utah. (Photo by AP Photo/PRI) 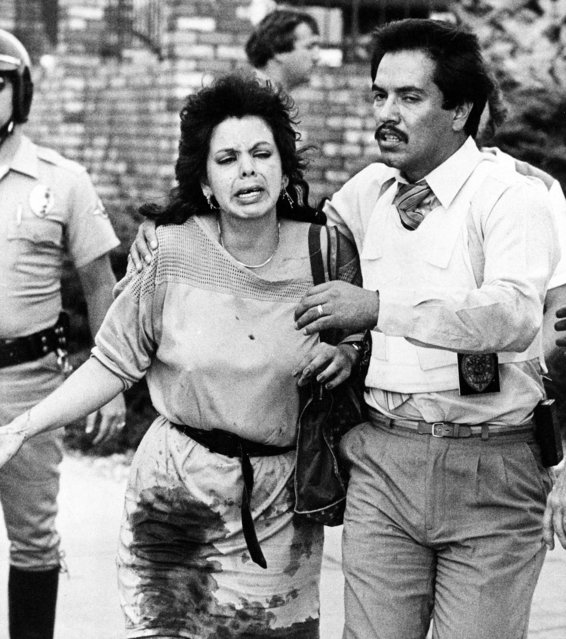 A police officer leads a bloodied woman away from the scene of a shooting rampage in a McDonald's restaurant in San Ysidro area of San Diego, Calif., July 18, 1984. On that day James Oliver Huberty shot and killed 21 people, including five children and six teens, and wounded 19, before being shot and killed by a police sniper. In the years since Huberty's rampage his gruesome death total has been surpassed, but people who study homicides say there is something lasting and shocking about the McDonald's massacre. (Photo by Lenny Ignelzi/AP Photo) 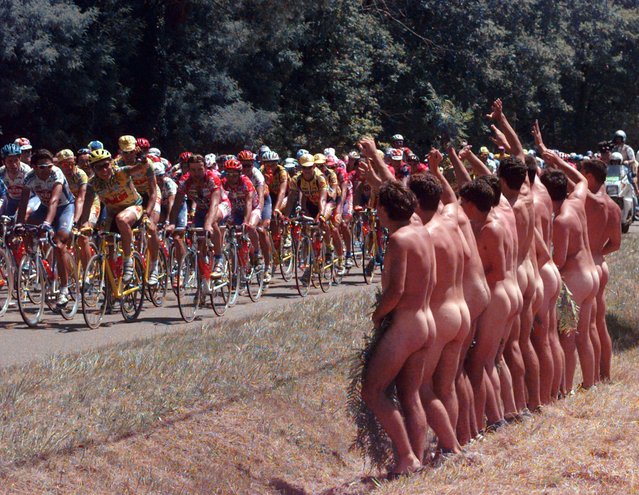 A group of naked spectators wave at the pack during the 19th stage of the Tour de France cycling race between Hendaye and Bordeaux, southwestern France Friday July 19, 1996. The race ends Sunday in Paris. (Photo by Laurent Rebours/AP Photo) 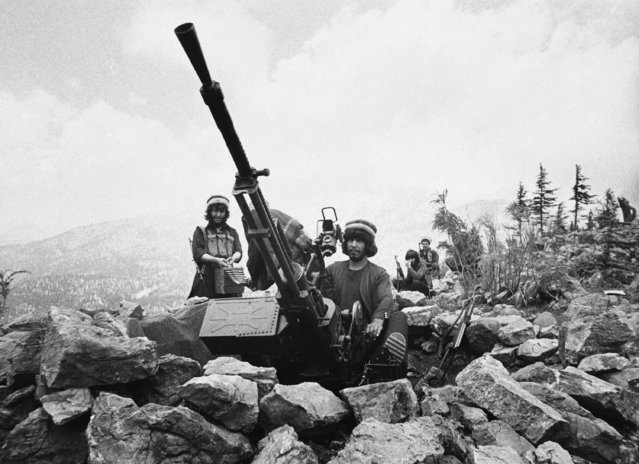 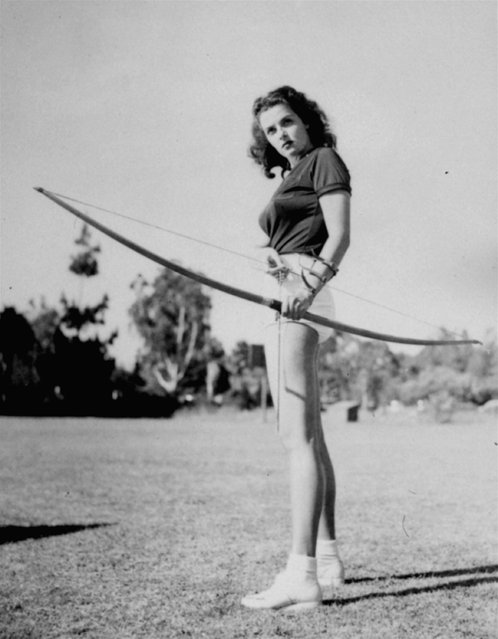 Actress Jane Russell tests her skill with a bow and arrow, July 25, 1941. Jane is scheduled to appear in the upcoming motion picture, “The Outlaw”. (Photo by AP Photo) 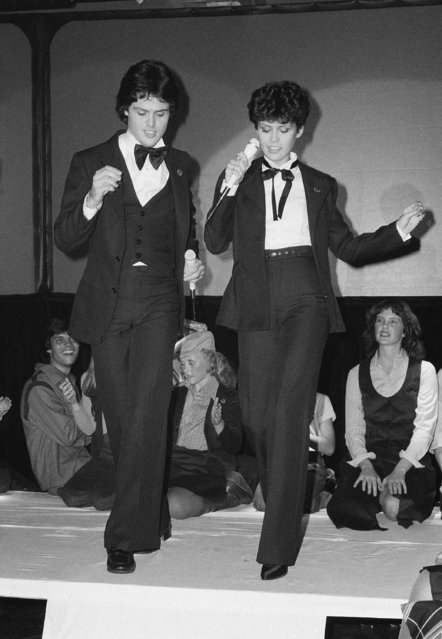 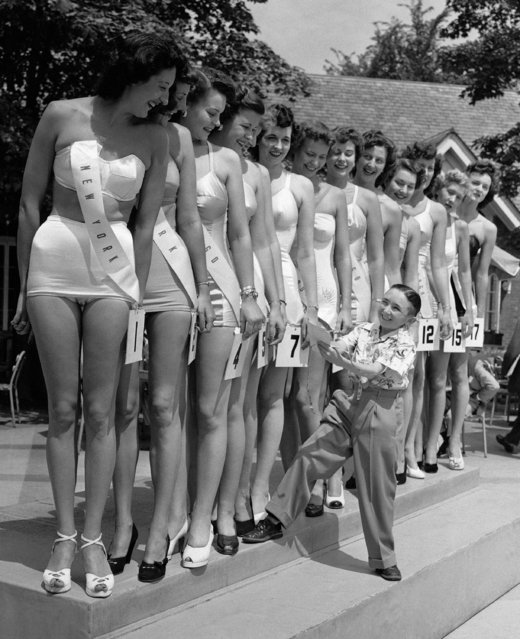 At a beauty contest to select the nation's Queen of Height during the first national convention of Tall People's Clubs in New York on July 29, 1949, little Charlie Young, only three feet, eleven inches tall, acting as judge, had a tough time making up his mind for the choice. The national minimum height requirement for women members is 5 feet 10 inches, and for men, 6 feet. (Photo by Robert Kradin/AP Photo) 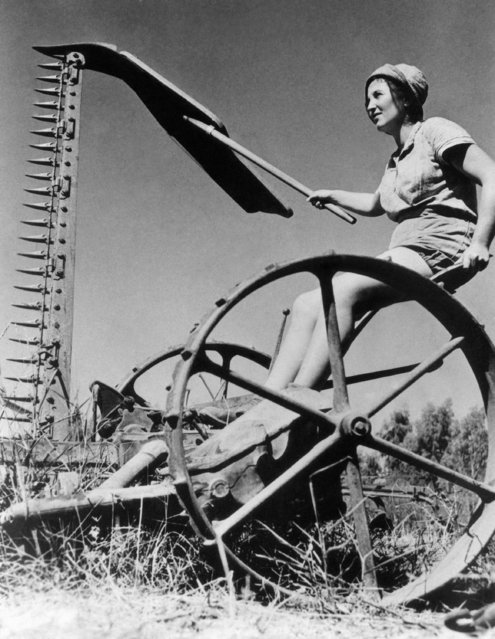 As in other zones of war in Palestine today, there are few more important wartime functions then maintaining and increasing the food supply. As the Jewish men go off to war to join the British forces in defense of the Jewish National Home and other key links in the British Empire chain of defenses, the women are taking their places in the fields as well as in the factories, doing all the hard work as skillfully as their brothers. One of the young women pioneers doing field work in the colony of Ain Hachoresh, one of the 275 Agricultural settlements on June 3, 1941 which constitute the most important Achievement of the 550,000 Jews in Palestine. The women are learning to drive tractors, to manage large cow-stables, to York in the grain fields and to tend the sheep. The Jews of Palestine, 10,000 of whom are in the British forces, have been pleading with the British government for the right to enlist tons of thousands of other Jews to defend the Jewish National Home. (Photo by AP Photo) 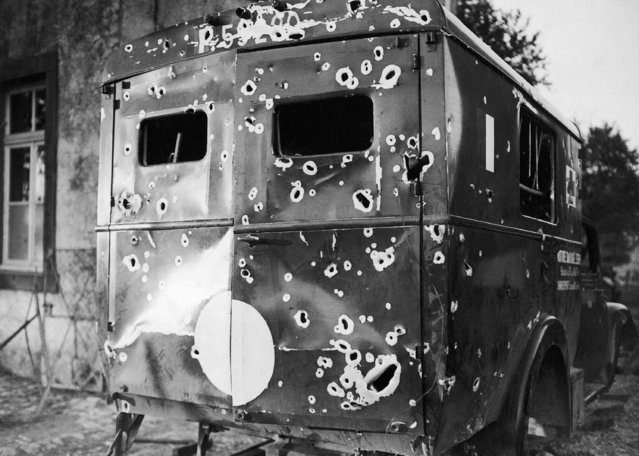 A bullet-riddled French ambulance, machine-gunned by Germans on a trip out of a fighting zone in France on June 6, 1940. (Photo by AP Photo) 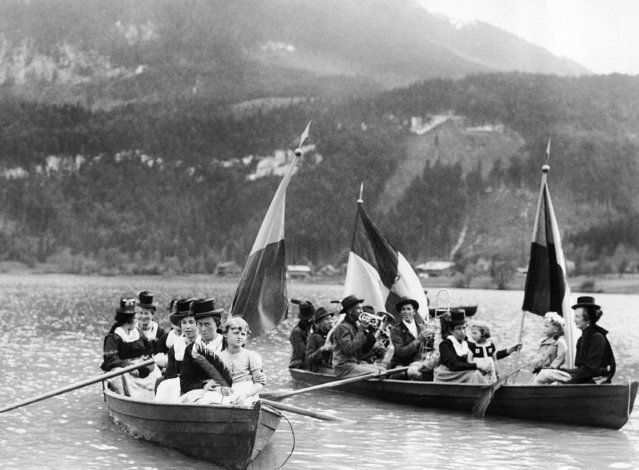 Thiersee villagers in their picturesque national dress arriving on the Thierses, Germany shore to watch the first dress rehearsal of the Passion Play on June 8, 1935. (Photo by AP Photo) 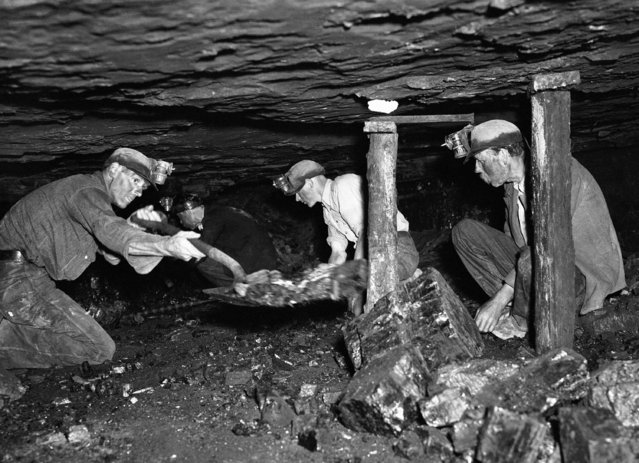 Low gallery far beneath the earth's surface, with intrepid miners searching for coal somewhere in England, on June 10, 1938. (Photo by AP Photo) 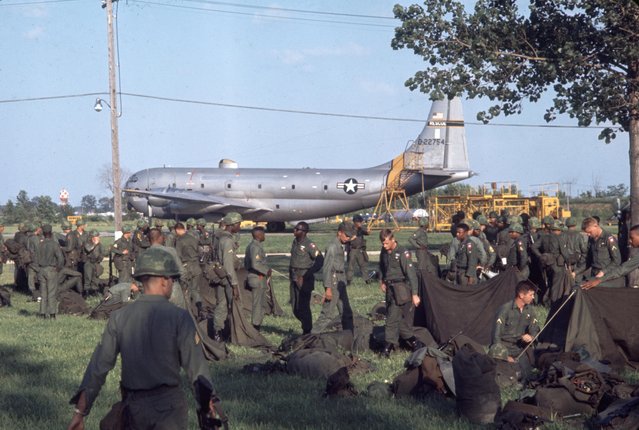