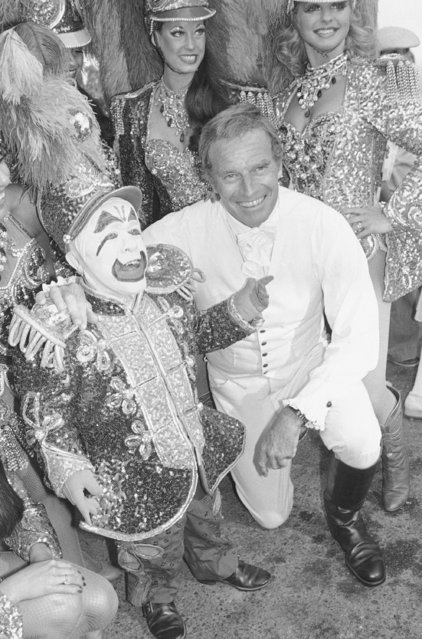 In this July 19, 1978 file photo, actor Charlton Heston is shown with Ringling Bros. and Barnum and Bailey Circus clown Prince Paul during the City of Hope's Celebrity Circus opening in Inglewood, Calif. The Ringling Bros. and Barnum & Bailey Circus will end “The Greatest Show on Earth” in May 2017, following a 146-year run of performances. Kenneth Feld, the chairman and CEO of Feld Entertainment, which owns the circus, told The Associated Press when the company removed the elephants from the shows in May of 2016, ticket sales declined more dramatically than expected. (Photo by AP Photo/McLendon) 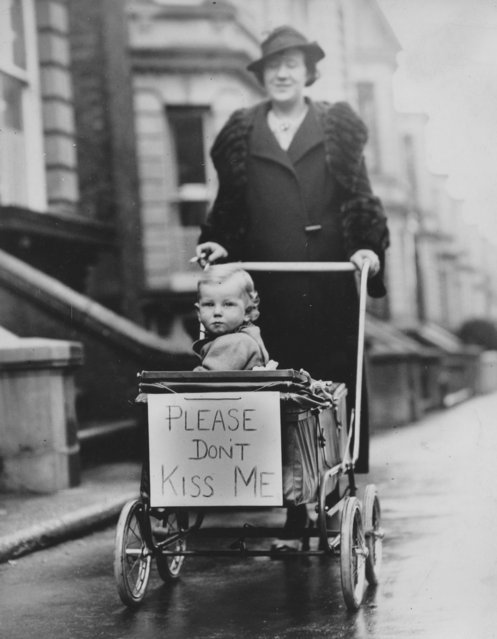 To prevent friends and relatives from kissing her baby, this woman has attached this card to the front of her stroller in order to safeguard her child against infectious colds, Margate, England, early to mid 20th century. (Photo by Visual Studies Workshop/Getty Images) 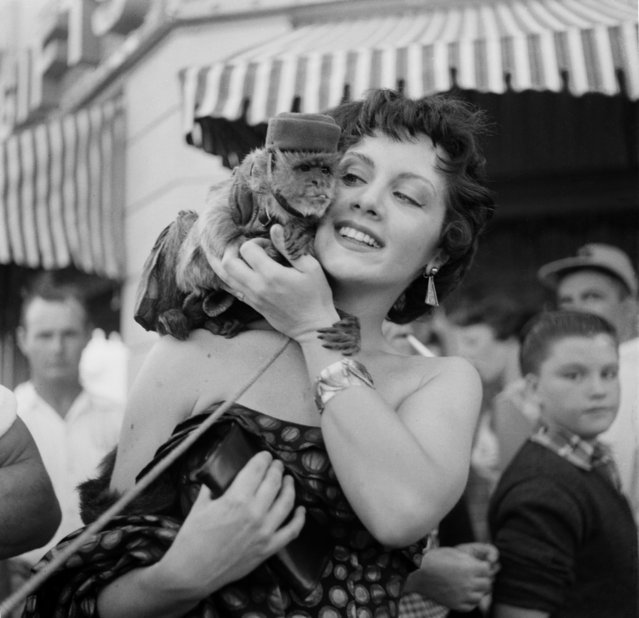 Actress Kathleen Case poses with a monkey during the Opening day of Disneyland in Anaheim,California, 1955. (Photo by Earl Leaf/Michael Ochs Archives/Getty Images) 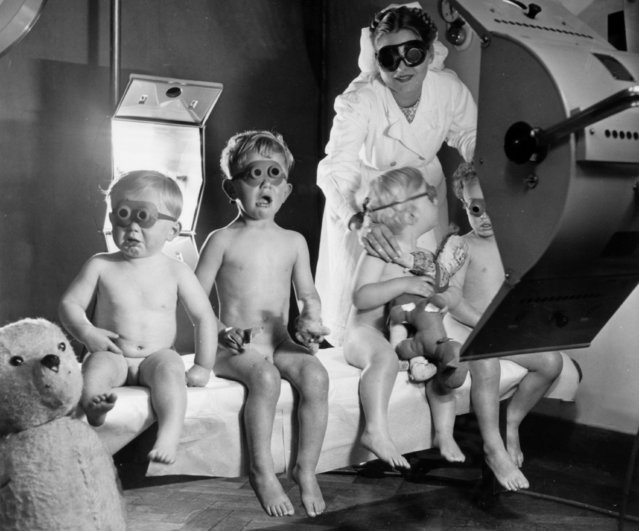 Young children at a Bristol, Great Britain health centre unsure of the benefits of sun-lamps and the special glasses that must be worn, July 1948. The health centre was part of the newly introduced free National Health Service. (Photo by Popperfoto/Getty Images) 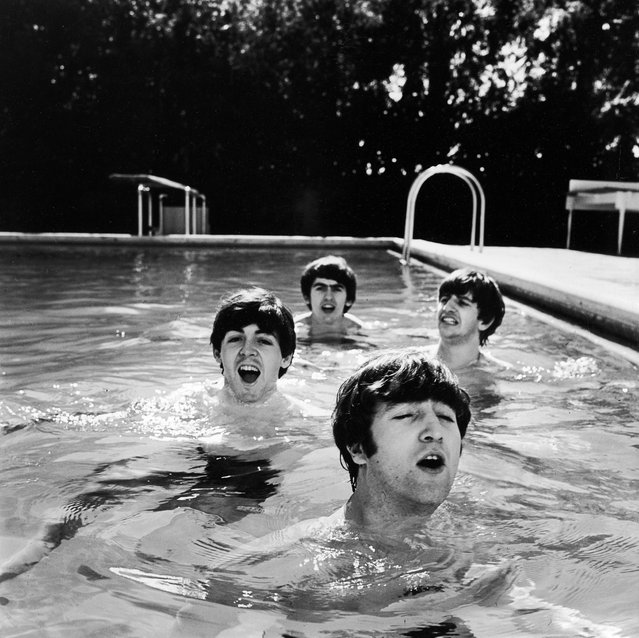 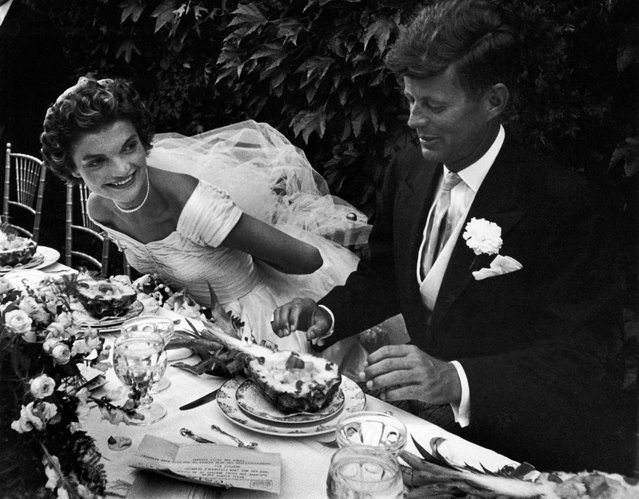 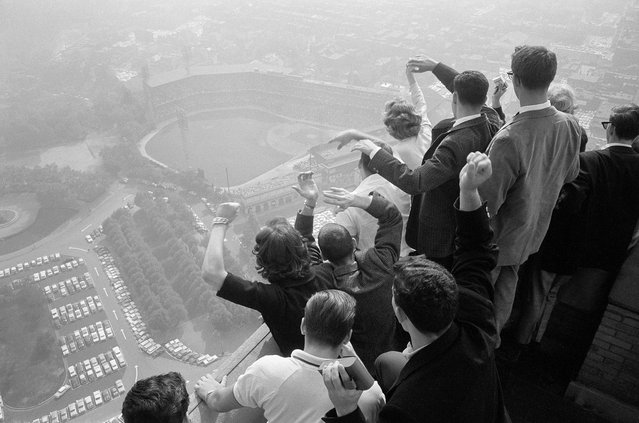 University of Pittsburgh students cheering wildly from atop Cathedral of Learning on school's campus as they look down on Forbes Field where the Pittsburgh Pirates are winning their first World Series in 35 yrs. against the NY Yankees on October 01, 1960. (Photo by George Silk/The LIFE Picture Collection/Getty Images) 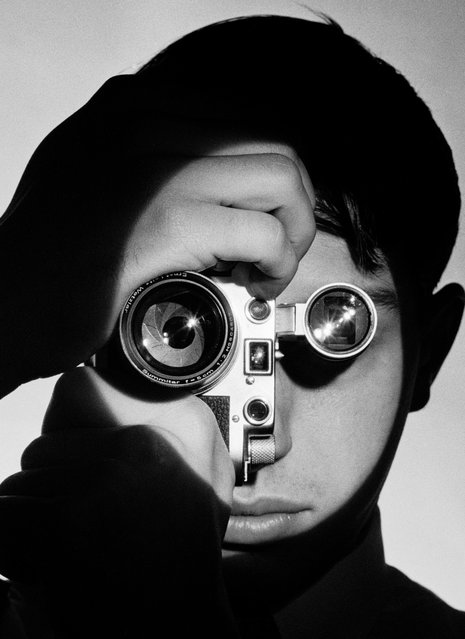 Young man (photographer Dennis Stock) holding camera in front of his face so that lense looks like his right eye & viewfinder his left on June 01, 1951. (This picture was basis for story that Feininger later developed for LIFE in 1955). (Photo by Andreas Feininger/The LIFE Picture Collection/Getty Images) 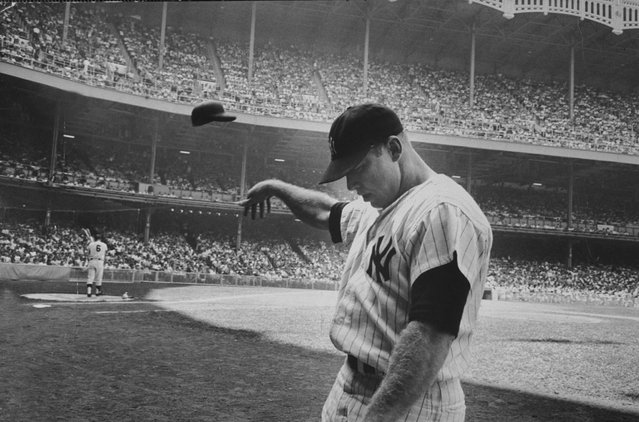 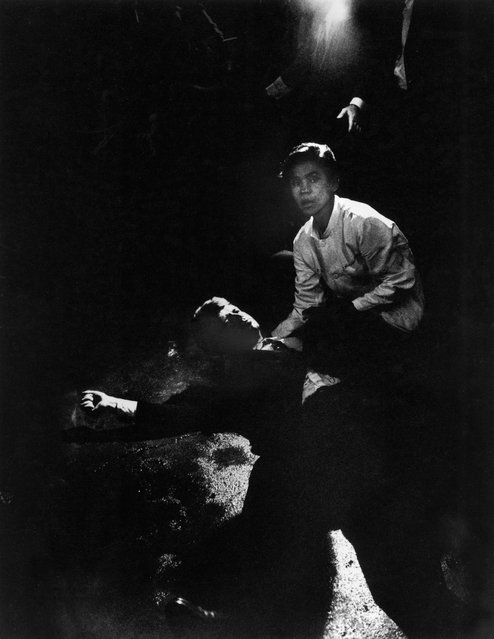 Senator Robert Kennedy sprawled semi-conscious in his own blood after being shot in brain and neck while busboy Juan Romero tries to comfort him, in kitchen at hotel, on June 06, 1968. (Photo by Bill Eppridge/The LIFE Picture Collection/Getty Images) 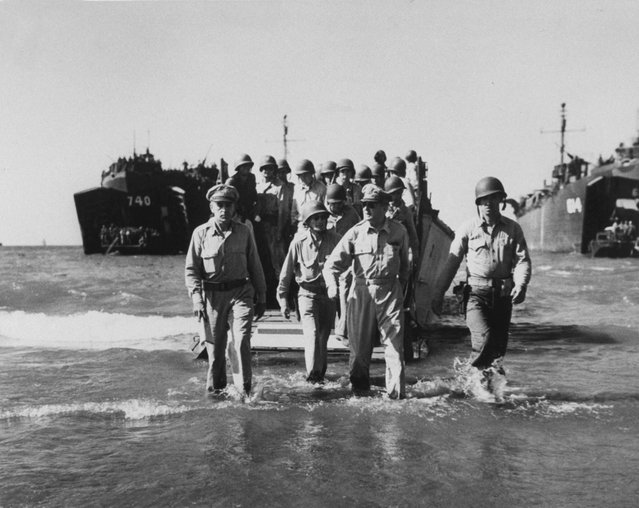 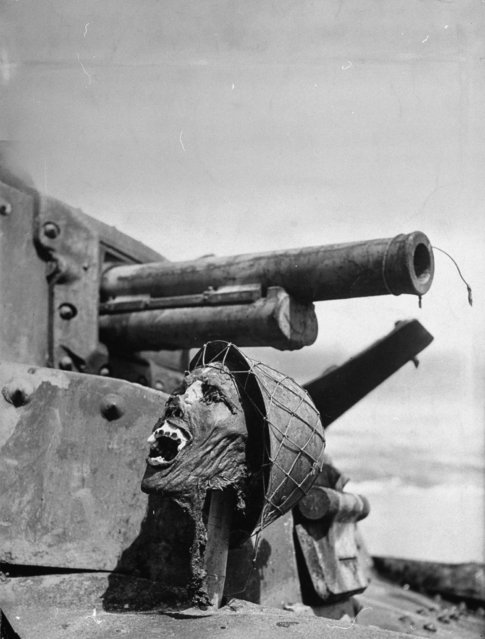 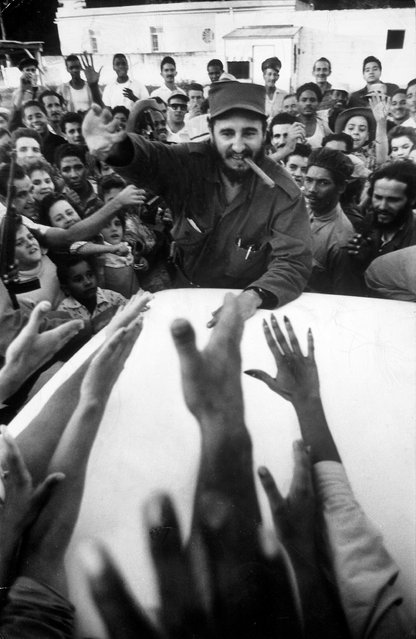 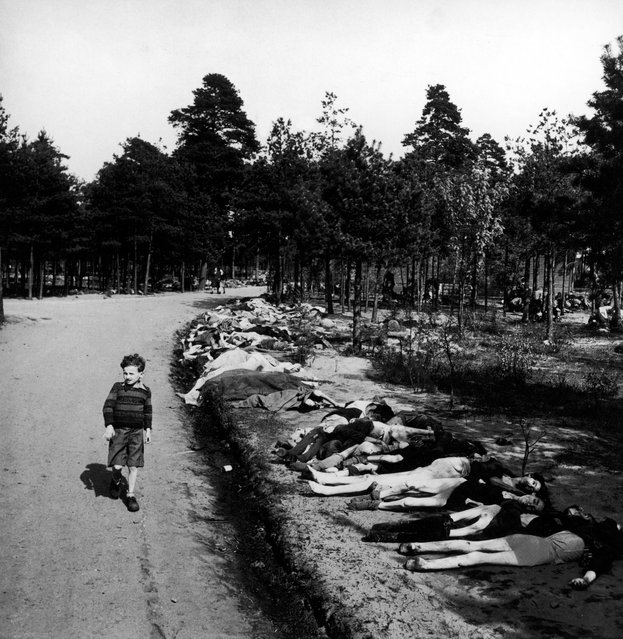 Young boy dressed in shorts walks along a dirt road lined with the corpses of hundreds of prisoners who died at the Bergen-Belsen extermination camp, near the towns of Bergen and Celle, Germany, April 20, 1945. (Photo by George Rodger/The LIFE Picture Collection/Getty Images) 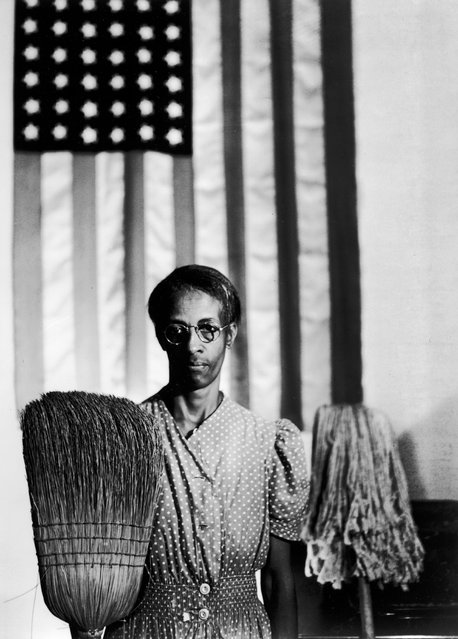 Ella Watson, a government charwoman, in Washington DC, August 1942. She is wearing a polka dot smock, standing in front of an American flag, and holding a broom in one hand and a mop in the other. (Photo by Gordon Parks/FSA/Getty Images) 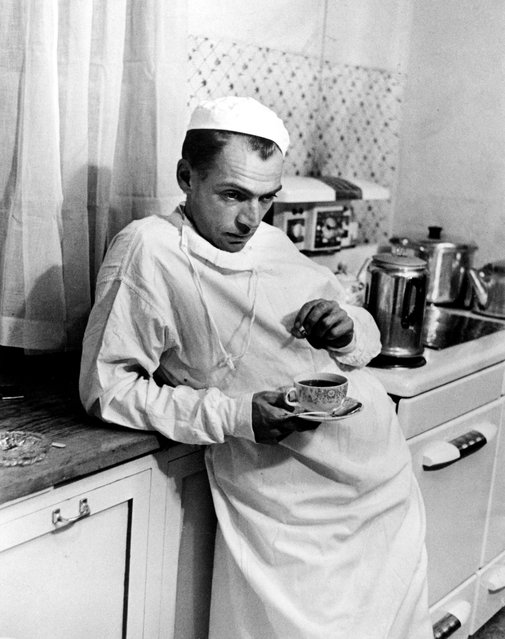 Country Dr. Ernest Ceriani in a dazed state of exhaustion, having a cup of coffee in the hospital kitchen at 2 a.m. after performing a cesarean section where the baby & the mother died due to complications, September 20, 1948. (Photo by W. Eugene Smith/The LIFE Picture Collection/Getty Images) 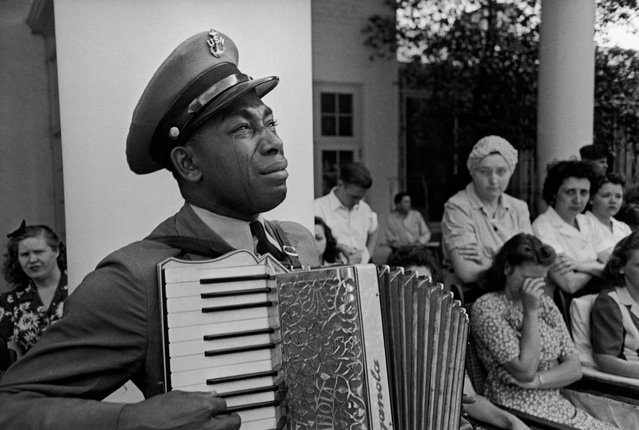 Navy CPO Graham Jackson with tears of grief streaming down his cheeks as he plays “Goin' Home” on the accordion while Pres. Franklin D. Roosevelt's body is carried from the Warm Springs Foundation where he died suddenly on April 12, of a stroke; April 13, 1945. (Photo by Ed Clark/The LIFE Picture Collection/Getty Images) 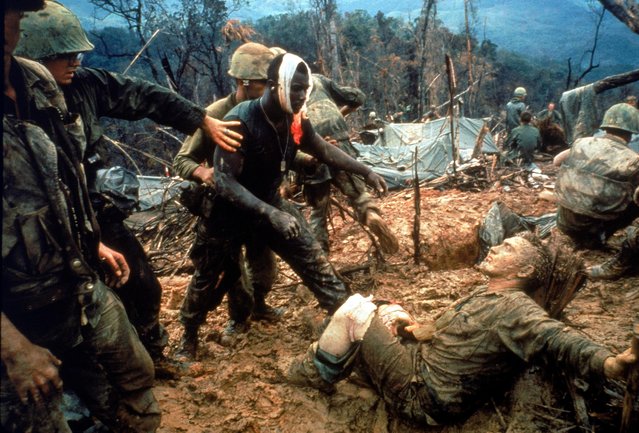 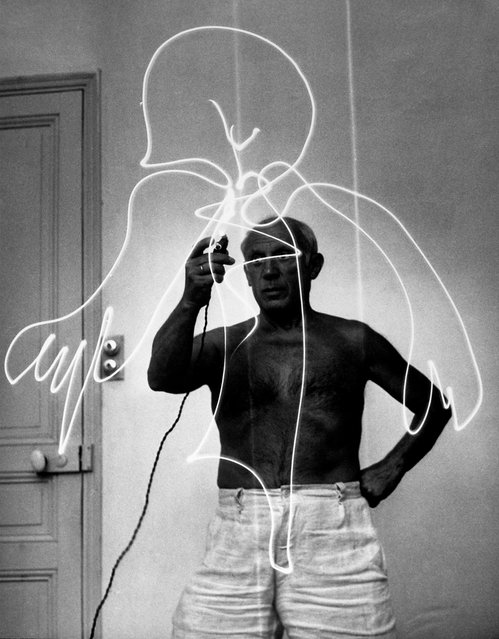 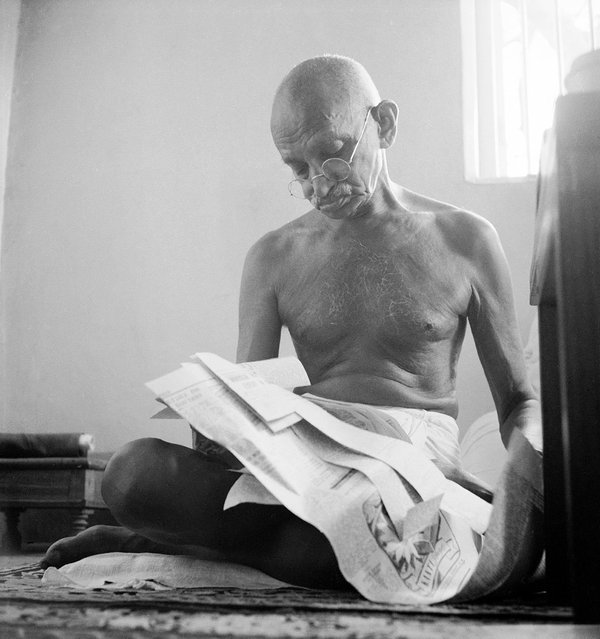 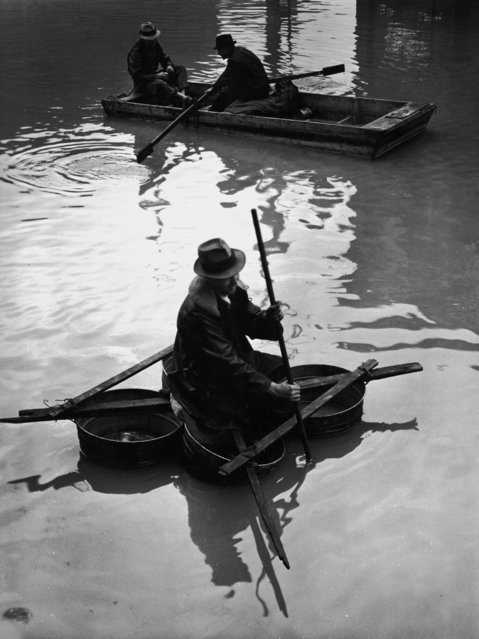 The victim of a flood paddles a makeshift boat fashioned out of four washtubs lashed together with wooden slats, while in the background, two men row a flat boat during a flooding of the Mississippi River, Louisville, Kentucky, February 1937. (Photo by Margaret Bourke-White/The LIFE Picture Collection/Getty Images) 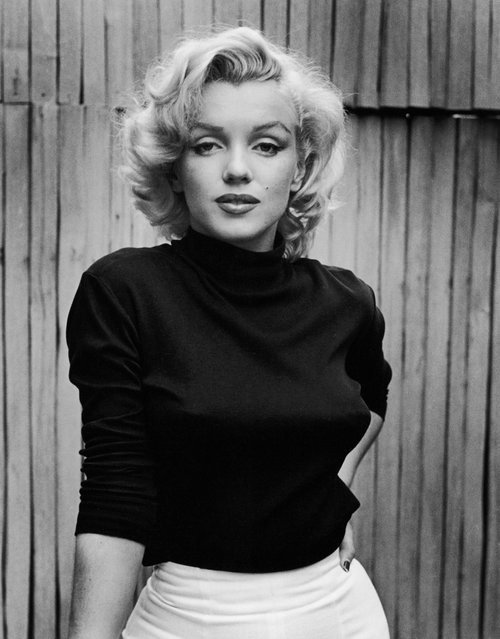