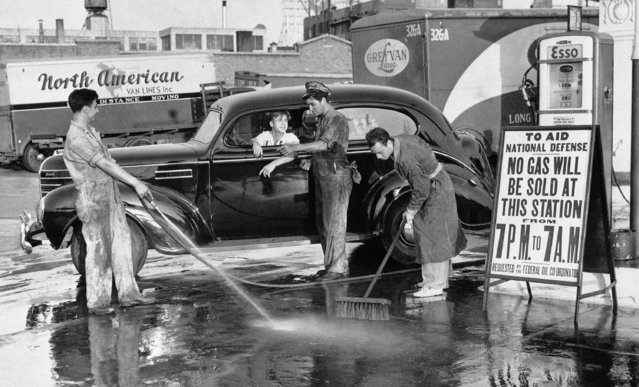 This motorist could get plenty of water and air if he wished, but no gasoline in New York, August 3, 1941. He pulled into this station, asked the attendant to “fill er up”, but was informed that the station was closed, observing the dawn to dusk blackout which shut down 100,000 stations on the east coast at 7 p.m., to conserve petroleum products. (Photo by John Rooney/AP Photo) 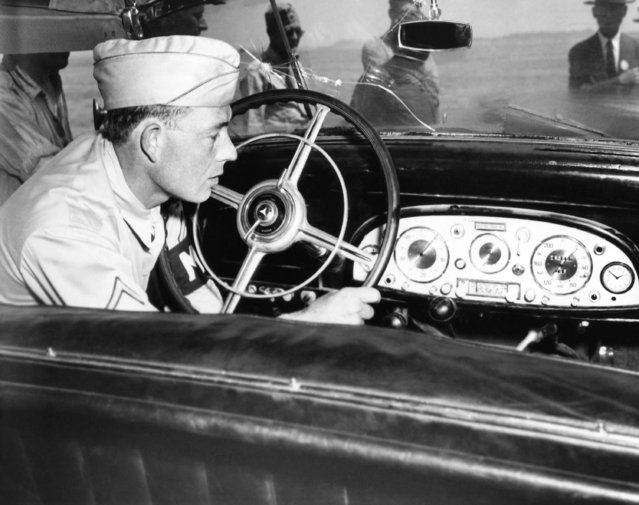 An unidentified MP inspects the dashboard of Reichsmarshall Hermann Goering's personal automobile, unloaded from the S. S. George Shiras at Boston on August 8, 1945. The Mercedes-Benz, a powerful 8400-pound job with bullet proof glass an inch and a half thick in its windows and an overall body covering of 2-inch armor steel, is consigned to Camp Cooke, California. Bullet holes in windshield. (Photo by AP Photo) 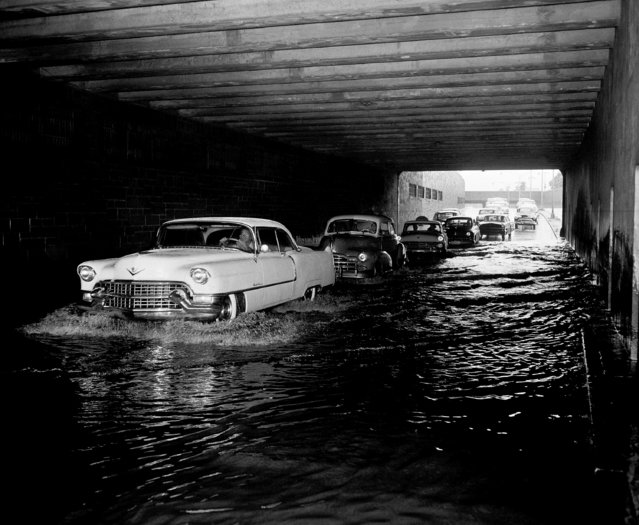 Motorists take it easy through this underpass at Queens Blvd., and Horace Harding Blvd., August 12, 1955, Long Island, New York. New York City was hit by Hurricane Connie, causing the heaviest rains of the year. The weather bureau reported 4.61-inches during a 17-hour period beginning at 8 p.m., Aug. 11. Many cellars were flooded and roofs made dangerous heavy by the weight of the water, and motor cars stacked along highways leading to the city. (Photo by John Lent/AP Photo) 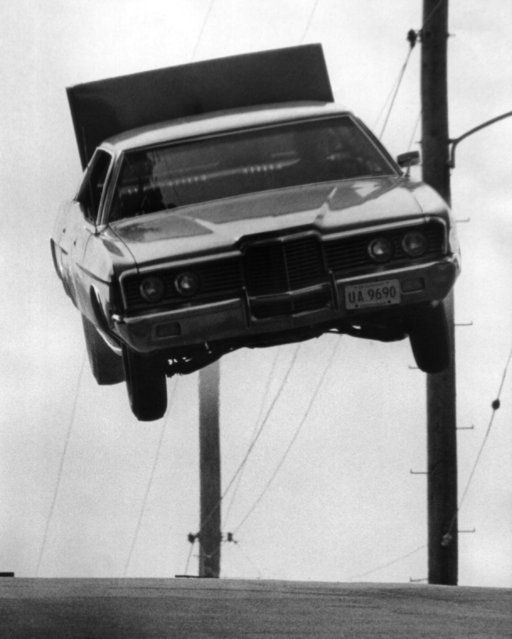 Stunt driver Eddie Mulber takes a high leap over a road hump in a chase scene for the movie production “Stingray” which is being shot in the St. Louis area, August 15, 1977. The movie, due for release next spring, is full of crashes and chase scenes. (Photo by AP Photo/DGM) 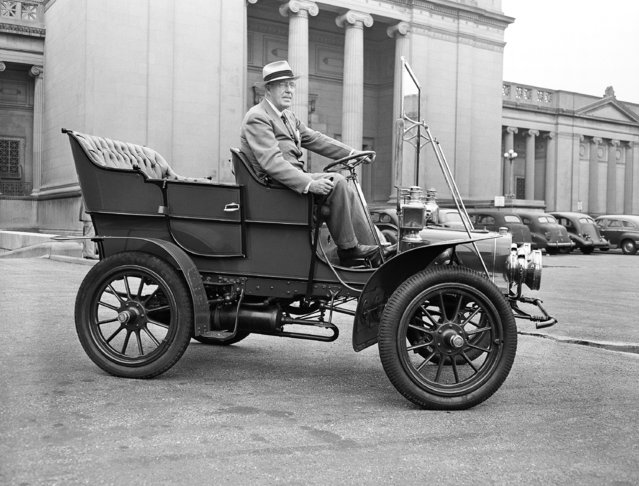 Charles B. King, umpire in the first automobile race held on Thanksgiving Day 1895, sits at the right-hand drive of a 1907 Cadillac on August 17, 1945 in Chicago. To commemorate fifty years of automobile progress, officials at the Chicago Museum of Science and Industry plan to recreate the first race in history. (Photo by Matty Zimmerman/AP Photo) 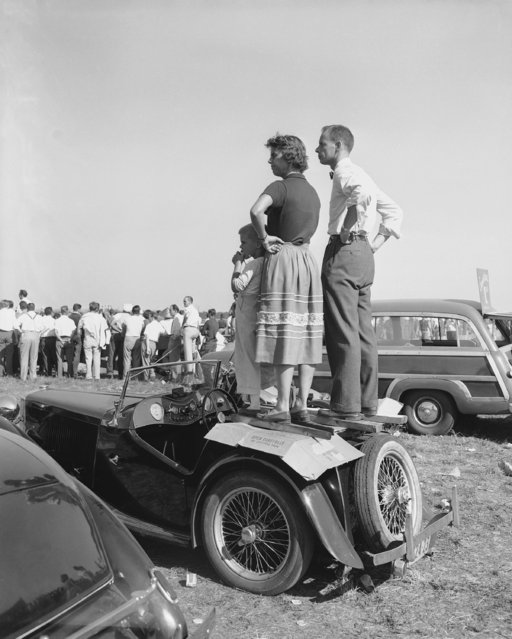 British MG sports cars were much in evidence on and off the track, at the road races for foreign cars at the Linden Airport in New Jersey, August 22, 1949. This family turned the back of their sporty little car into a grandstand to view the races. Several hundred foreign cars were spotted among those driven in by spectators. (Photo by Bob Wands/AP Photo) 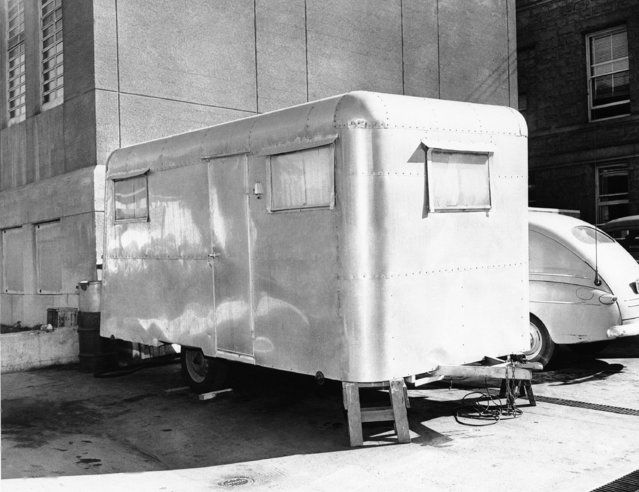 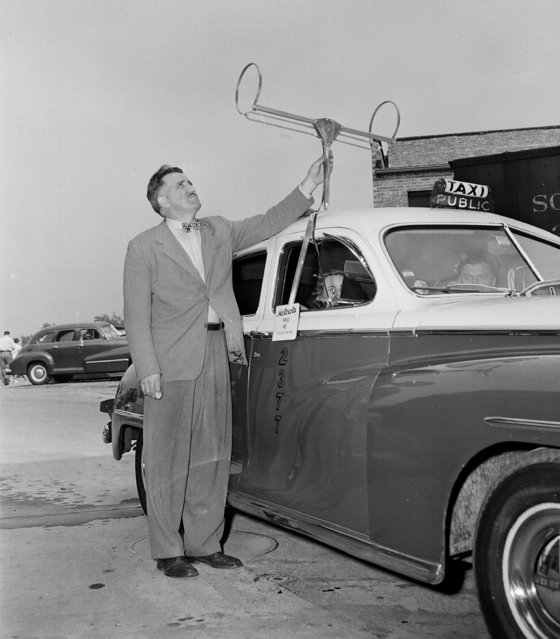 George Fyler, television engineer, adjusts the antenna he designed for the first installation of a television set in a taxicab, shown in Chicago on July 1, 1948. He adapted a standard table model with a four and one-half by six inch viewing screen, which requires only 70 watts of power. The cost of the video set installed is $200. (Photo by Edward Kitch/AP Photo) 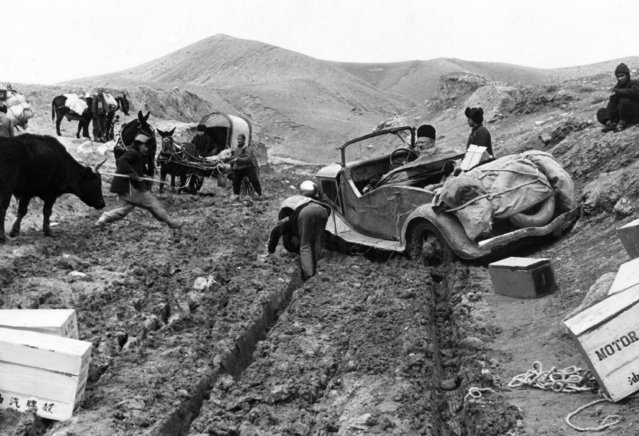 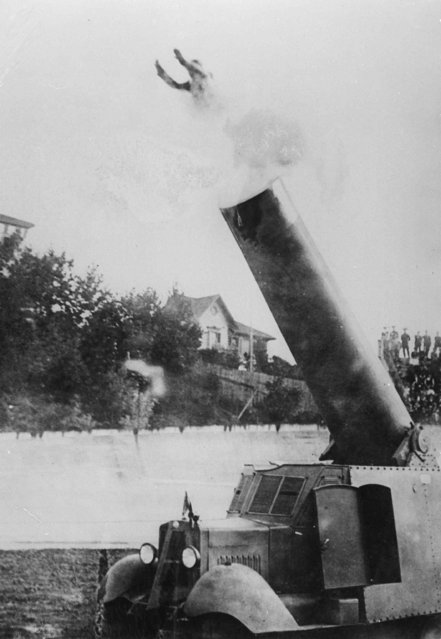 Hugo Zacchini of Turin, Italy, is shot from a specially built cannon invented by his brother, July 19, 1927. He landed in a net about 130 feet away. (Photo by AP Photo) 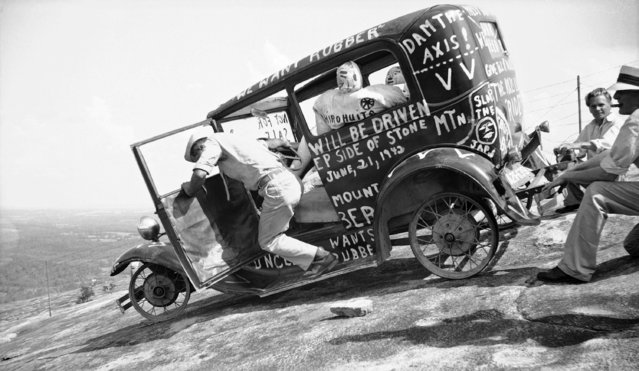 Hitler, Hirohito and Mussolini, in effigy, are about to take a mile-high plunge over Stone Mountain, near Atlanta, Georgia, June 21, 1942, as part of the scrap rubber drive. Private Elias Nour, who arranged the stunt as a farewell party on the eve of his entrance into the army, is on the running board. He guided as the “Axis” plunged to destruction. Spectators had to give a scrap of rubber as the price of admission to the spectacle. (Photo by AP Photo) 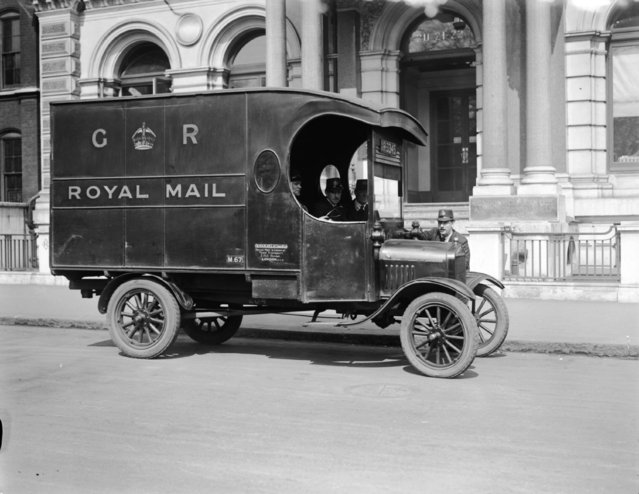